Mixing bubblegum and taffy might seem like a bit of a redundant concept – they’re both a chewable confection, after all.  But back in 1986, novelty bubblegum manufacturer Amurol did just that when they introduced Baffy, the “taffy that turns into bubble gum”.

Amurol’s Baffy was said to “look, pull, and chew just like taffy” and as such it certainly fit the bill of a novelty bubble gum.  Sold as a two pack with an outer-wrapper style and size that was very much in line with the popular Tangy Taffy brand (now Laffy Taffy), the hope must have been to grab some of the taffy bar market share.

Here’s a look at an outer wrapper for Baffy: 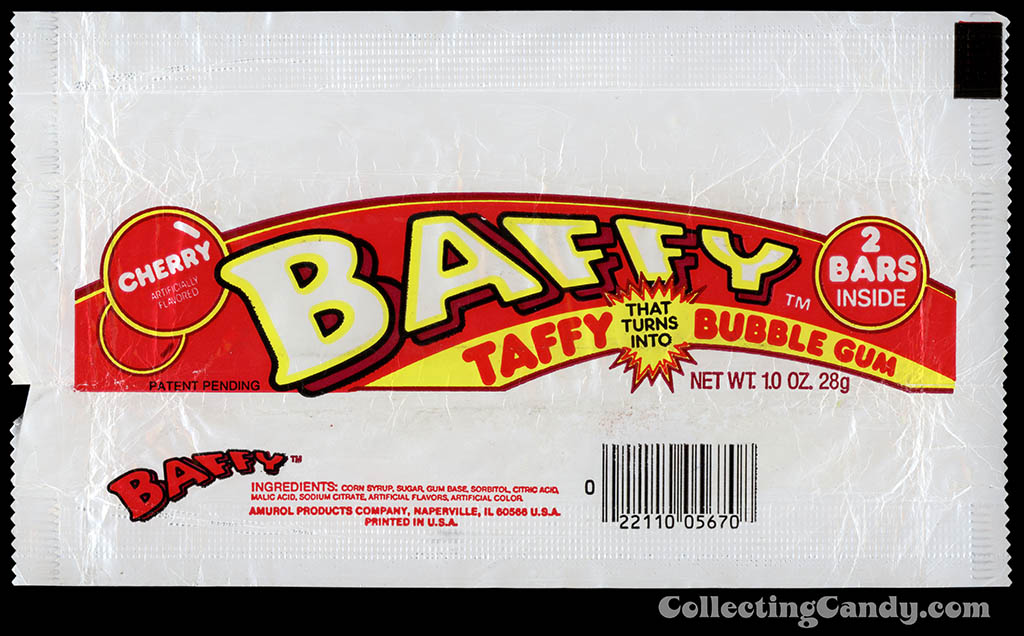 When I added that Baffy wrapper to my collection, it was actually still sealed and full package.

As regular readers of CollectingCandy.com already know, old bubble gum can be a sticky, difficult substance to deal with, and it can ruin wrappers from the inside out.  Add vintage taffy into the vintage bubblegum chemical mixture and you get one of the stickiest, most-difficult messes I’ve ever had to deal with.

Fortunately, the inner wrappers took all of the brunt of the decomposing confectionery damage and protected the outer wrapper nicely.  Of the two inner wrappers, I was only able to salvage one of them, and after a lot of cleaning, it came out looking pretty good.  Unlike the outer wrapper which was a mylar type of material, the inner wrapper was part paper and part some plastic material, making it difficult to open cleanly or to keep intact.  The stains the contents left are clear in the scan here.  I should note that even now this inner wrapper retains some taffy-bubblegum residue on the inside of it.

I had long assumed that Baffy was only ever sold in cherry flavor, as I’ve only encountered a wrapper for it one other time and it was also cherry.  During some research last week, I came across a candy trade magazine clipping which revealed that Baffy was available in grape flavor as well as the cherry, and not only that but it was also sold as 5-cent individually-wrapped pieces: 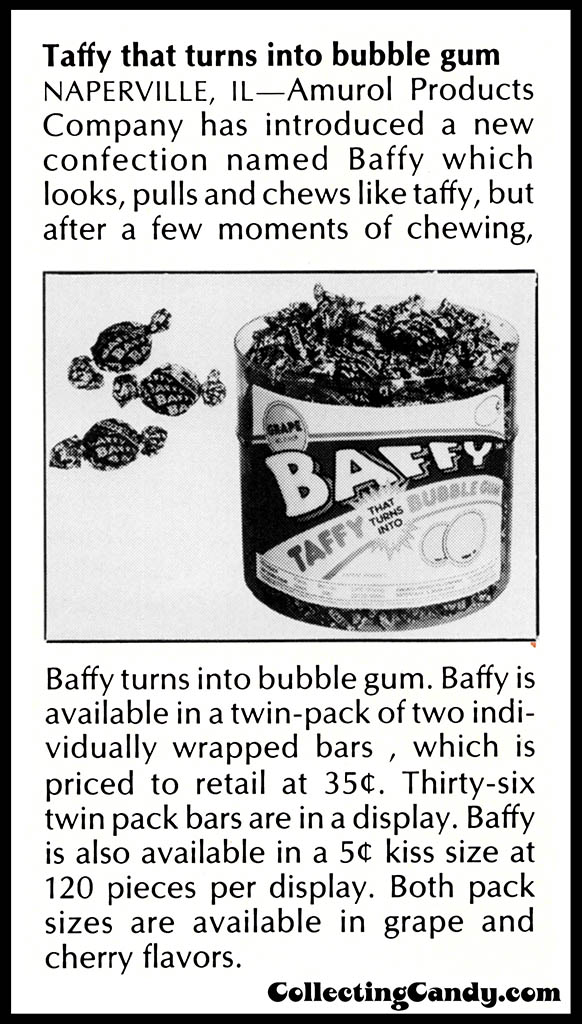 So there you have it, an example of what might be the only time the worlds of taffy and bubblegum have ever truly merged.  Anyone out there remember Baffy?  If you do, make sure you leave a comment and let us know.

Maybe someday I’ll track down one of the grape wrappers or even one of the individuals.  For now, that’s everything I’ve got on the bubblegum-taffy known as Baffy.  See you next time!

A New York City based writer, editor and sometimes actor. After spending much of the 1990′s in the comic book business helping tell the stories of Marvel Comics’ X-Men as series editor, he has since split his time between developing his own entertainment properties while still consulting and working on others. Having been described as “the Indiana Jones of lost and forgotten candy”, Jason is one of the country’s premier candy collectors and historians with his discoveries appearing in countless blogs, magazines, newspaper articles, and books. Always happy to share his knowledge and unique perspectives on this colorful part of our popular culture, Jason has consulted with New York’s Museum of Food and Drink and has also been a featured guest on Food Network’s Heavyweights, France’s M6 Capital, and New York’s TheActionRoom.com. My Google Profile+
View all posts by Jason Liebig →
This entry was posted in 1980's, Bubble Gum, Novelty and tagged 1980's candy, 80's candy, Amurol, bubble gum, bubblegum, candy collecting, candy collection, candy collector, candy wrapper collection, candy wrapper collector, collectible, collecting candy, confectionery, confections, gum, packaging, sweets, taffy, vintage candy wrapper, wrapper, Wrigley. Bookmark the permalink.

2 Responses to When Bubblegum met Taffy, Things Got Baffy!