Willy Wonka’s Xploders — From Around the Globe!

Back in 1998, Nestle UK introduced the Wonka Xploder bar to the world – at least the United Kingdom part of it.  A chocolate bar infused with carbonated popping candy (ala Pop Rocks) – it seemed like a perfect kind of whimsy to sport the Wonka name.

The bar must have been a success because in the years that followed it would be released in Australia and the United States – with each country receiving a modified version of the original packaging.  Today I’m featuring the trio of wrappers that came about via Wonka’s Xplosion around the globe!

The Wonka brand is one of my favorites, typically due to the fanciful packaging designs that its products often receive.  As a collector it’s fascinating to note that Nestle often creates different package designs for the same Wonka product depending on where it is sold and with their Xploder bar they certainly followed that trend.

First produced and sold in the United Kingdom, here is a look at an original Wonka Xploder wrapper from 1998: 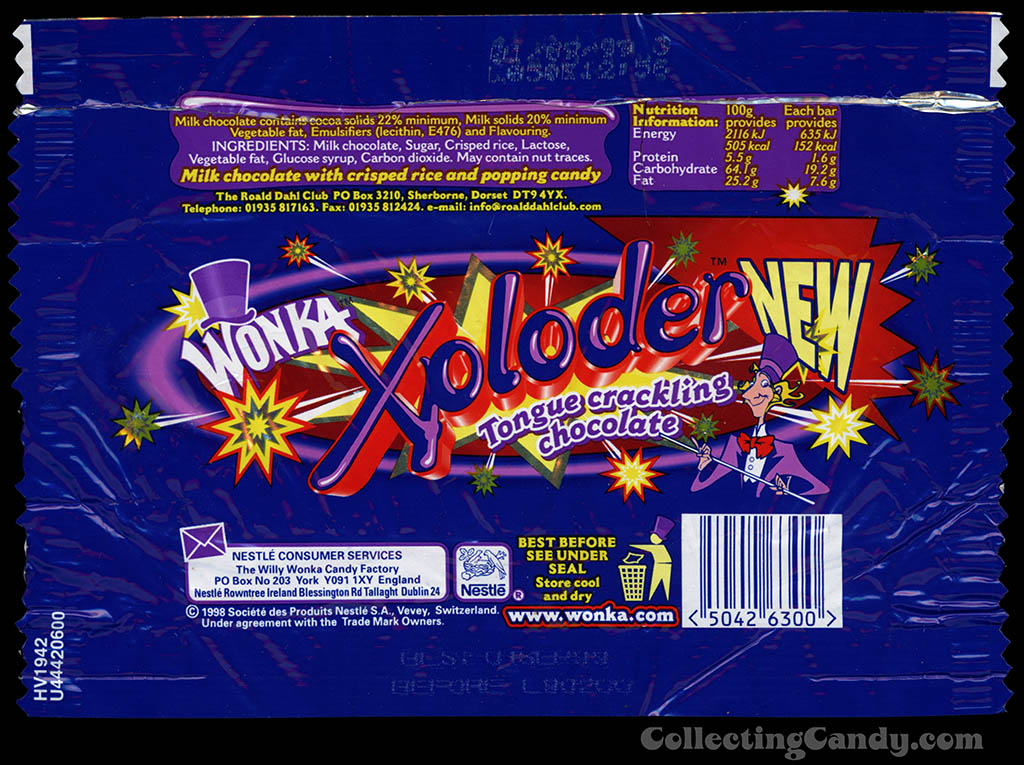 It’s a great-looking wrapper with hints of gold foil showing through and of course Willy Wonka himself presenting the bar with his cane. 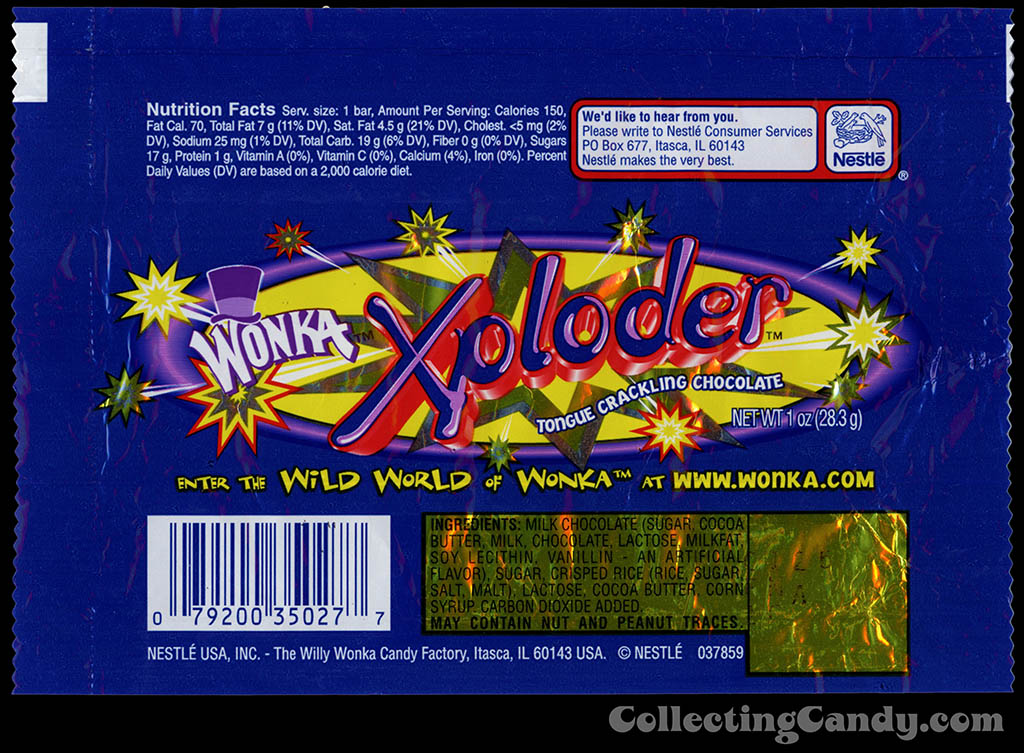 When the bar was released in the United States, much of the wrapper design was retained from the UK version with one glaring omission – no Willy Wonka mascot.  I can’t say for certain why this might have been, but we can assume that it was simply a case of market testing or preference on the part of the team involved in bringing it stateside.  Beyond that, the US-release wrapper features slightly more of the reflective foil showing through than the UK design did.

When the Wonka Xploder bar was released to the Australian/New Zealand market it again kept the fundamental design of the original UK wrapper but in this case was given a new name – the Wonka K-Boom: 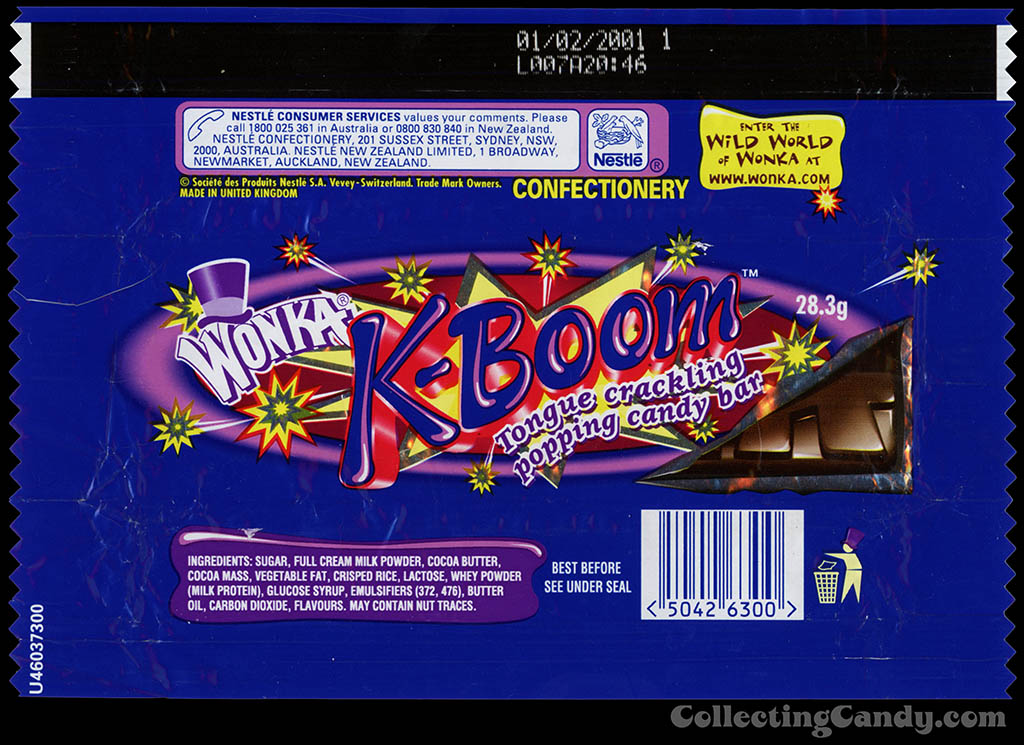 As you can see, the core design and type style from the original UK wrapper is retained but like the American release this version also lacks the Willy Wonka mascot.  Of note is the addition of a cutaway reveal of the bar itself, which appears to be molded in a Wonka logo shape.

I’d love to find out the story behind the name change from Xploder to K-Boom – perhaps there was another product in the Aussie market that already had the name?

Whatever the case, I think it’s quite fun to see how the same product packaging is modified to suit different marketplaces.

One last note – years after the Xploder bar was discontinued, Nestle USA would offer up another carbonated chocolate Wonka candy in the form of Wonka Tinglerz: 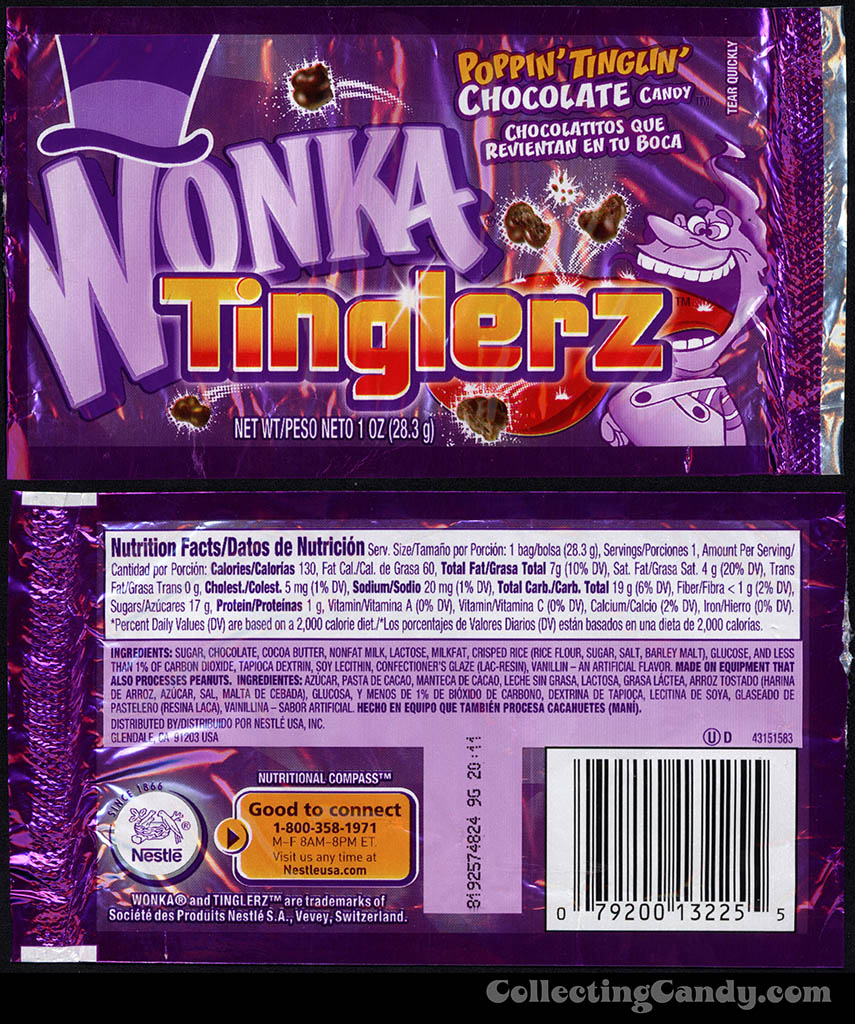 As far as I know, Wonka Tinglerz were only ever sold in the United States.

And that’s everything for today’s look at Wonka’s Xploder from around the globe.

A New York City based writer, editor and sometimes actor. After spending much of the 1990′s in the comic book business helping tell the stories of Marvel Comics’ X-Men as series editor, he has since split his time between developing his own entertainment properties while still consulting and working on others. Having been described as “the Indiana Jones of lost and forgotten candy”, Jason is one of the country’s premier candy collectors and historians with his discoveries appearing in countless blogs, magazines, newspaper articles, and books. Always happy to share his knowledge and unique perspectives on this colorful part of our popular culture, Jason has consulted with New York’s Museum of Food and Drink and has also been a featured guest on Food Network’s Heavyweights, France’s M6 Capital, and New York’s TheActionRoom.com. My Google Profile+
View all posts by Jason Liebig →
This entry was posted in British, Chocolate, Nestle, Wonka and tagged Australia, candy collecting, candy collection, candy collector, candy wrapper collection, candy wrapper collector, carbonated, collectible, collecting candy, confectionery, confections, England, mascot, Nestle, New Zealand, packaging, Pop Rocks, sweets, United Kingdom, vintage candy wrapper, Willy Wonka, Wonka, wrapper. Bookmark the permalink.

1 Response to Willy Wonka’s Xploders — From Around the Globe!