As an enthusiast of confectionery brand-oddities, I love finding flavor spinoffs and unusual food crossovers.  I recently became aware of one I never thought I’d see, a Bazooka bubblegum-flavored chocolate bar.  Well, to be clear this is a Bazooka bubblegum-flavored bar made of white chocolate and sold by Bazooka’s Israel-based distributor – but it’s still amazing and today it’s my pleasure to share it! 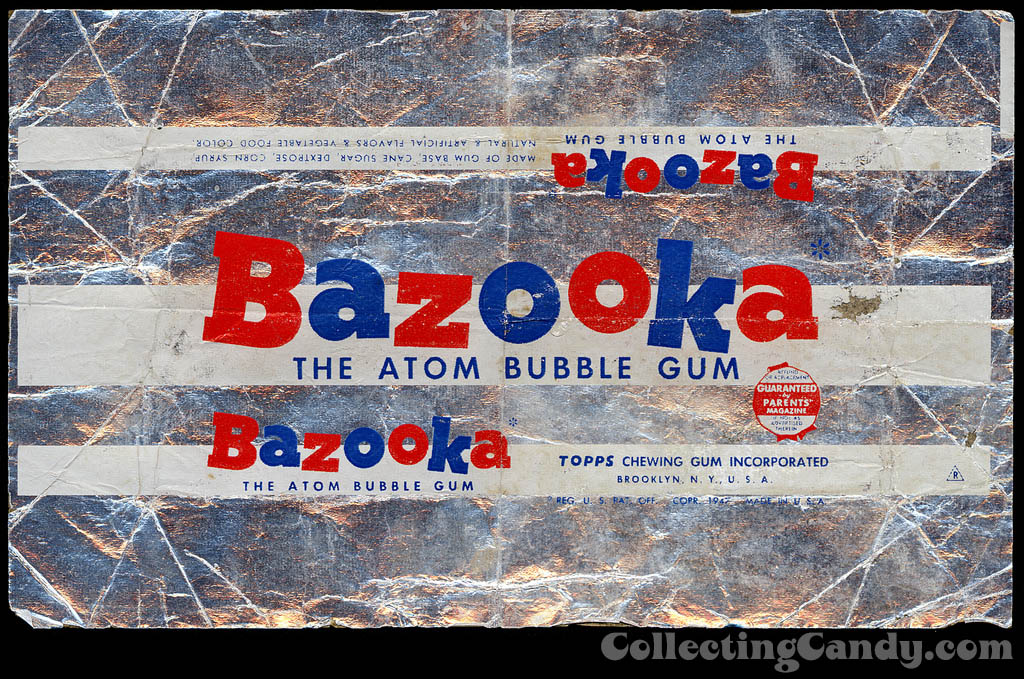 Bazooka bubblegum was first produced and sold by the Topps company back in the late 1940’s.  The brand would go on to be first marketed in Israel in 1958 and become a longtime success in that country.  Since 2001 the Strauss-Elite company has been the Israel-based manufacturer of Bazooka and their adherence to traditional flavors and packaging for the brand has even made it a popular import back here in the United States.  So today, while Bazooka bubblegum sold in the United States has changed its flavors and retired the traditional comic format, Israel’s Elite Bazooka gum retains them.

In 2013, Strauss-Elite made a bold confectionery move when they produced a Bazooka bubblegum-flavored-and-branded white chocolate bar.  Upon hearing of such a strange crossover last month, I had to track them down.  After a bit of internet searching, soon I had a pair of the bars ordered and on their way from Israel.

I didn’t know quite to expect when I opened them.  I’ve tasted white chocolate mixed with all sorts of unusual flavorings, and I was very curious about this one.

I can say without a doubt that they nailed it.  That is to say that the flavor of Bazooka gum is exactly what you get when you bite into the bar, with a touch of added sweetness from the white chocolate.  It tastes so much like Bazooka that it’s an odd sensation when it doesn’t start to chew like gum, but rather melts away as a white chocolate bar should.

Does the bubblegum flavor work with white chocolate?  Well, I’ll leave that up to an individual’s tastes.   It definitely earns my award for most unexpected use of bubblegum flavor in a non-gum confection.

Here’s a look at the wrapper:

And that’s everything for today’s post on this unusual offering from Israel – the Bazooka Bubblegum-Flavored White Chocolate Bar!

A New York City based writer, editor and sometimes actor. After spending much of the 1990′s in the comic book business helping tell the stories of Marvel Comics’ X-Men as series editor, he has since split his time between developing his own entertainment properties while still consulting and working on others. Having been described as “the Indiana Jones of lost and forgotten candy”, Jason is one of the country’s premier candy collectors and historians with his discoveries appearing in countless blogs, magazines, newspaper articles, and books. Always happy to share his knowledge and unique perspectives on this colorful part of our popular culture, Jason has consulted with New York’s Museum of Food and Drink and has also been a featured guest on Food Network’s Heavyweights, France’s M6 Capital, and New York’s TheActionRoom.com. My Google Profile+
View all posts by Jason Liebig →
This entry was posted in Bubble Gum, Gum, Topps and tagged Bazooka, bubble gum, bubblegum, candy collecting, candy collection, candy collector, candy wrapper collection, candy wrapper collector, collectible, collecting candy, confectionery, confections, Israel, mashup, packaging, sweets, vintage candy wrapper, white chocolate, wrapper. Bookmark the permalink.