This year the Just Born company has introduced a pair of brand-new designs for their holiday editions of Mike and Ike and Hot Tamales.  They’re both fun designs so I thought it was the perfect opportunity to review a few of their Christmas holiday offerings from the last decade.

Way back in 2003, Just Born created stocking-stuffer style offerings of both of their major brands.  Though I don’t have examples of these packages in my collection, I do have a two-sided sales flyer that showcases them: 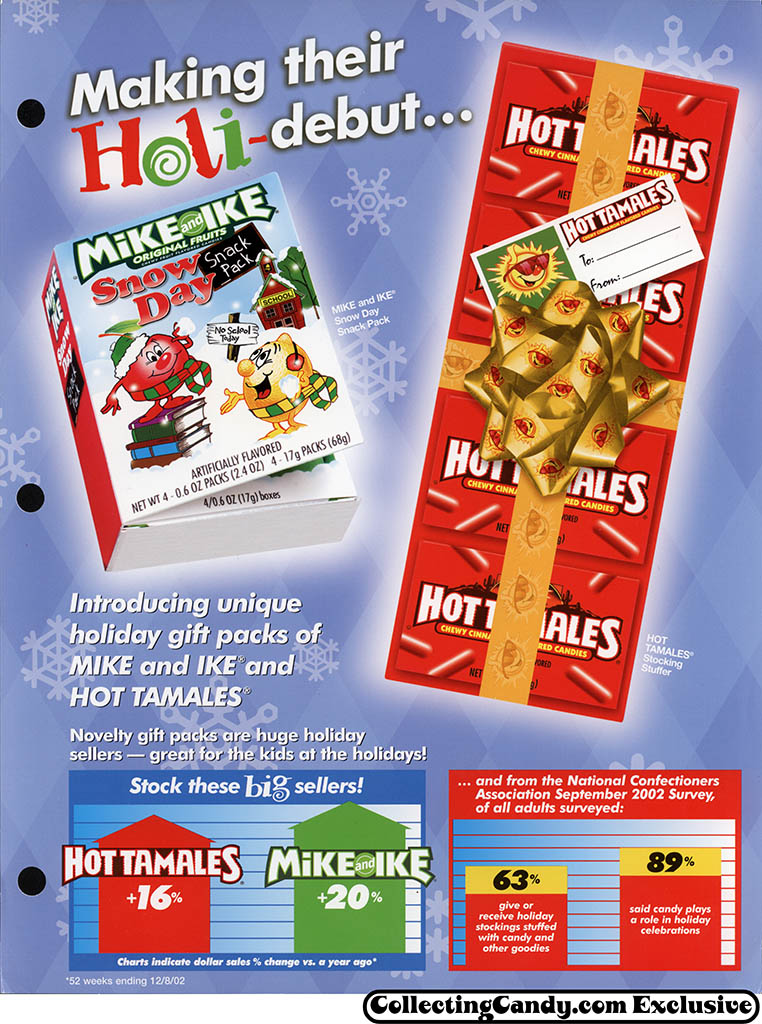 I especially like the Sweet Storybook-style Mike and Ike “Snow Day” snack-pack box included on the flyer. 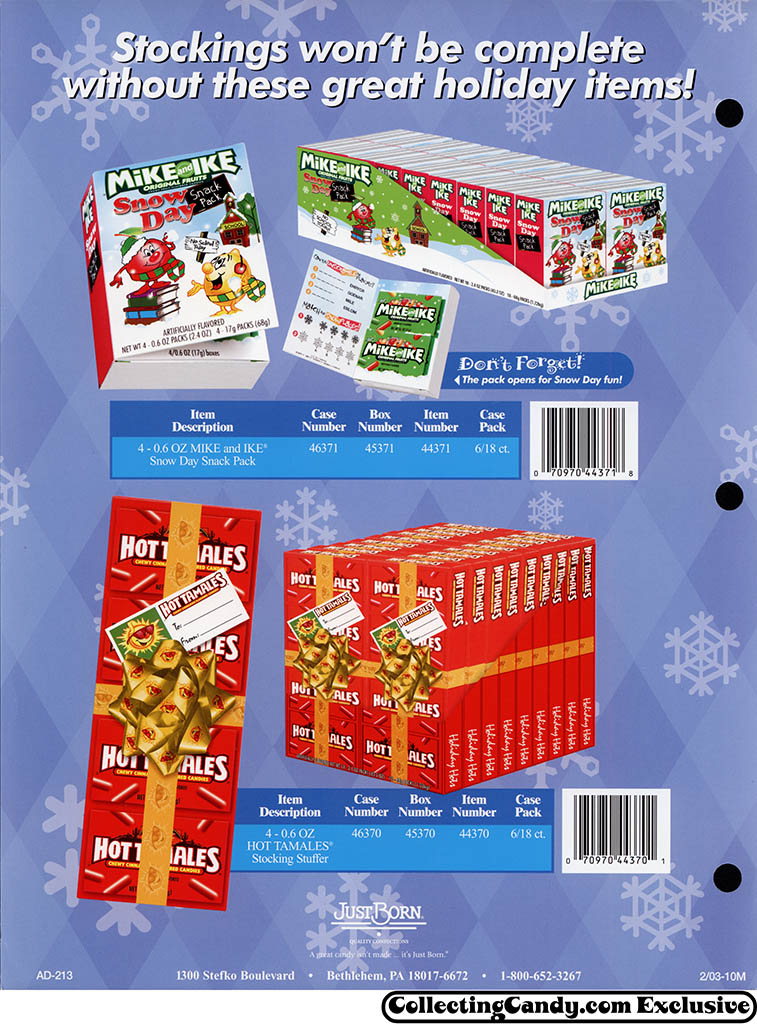 Just a few years later, both Mike and Ike as well as Hot Tamales would get holiday editions in the 6 oz theater-size boxes: 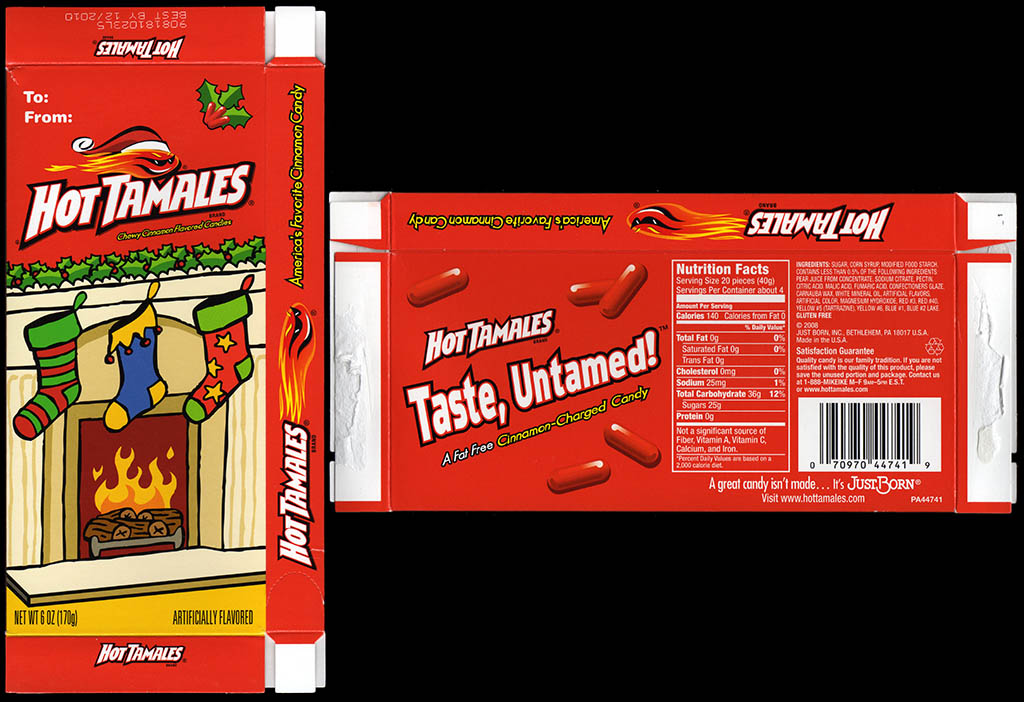 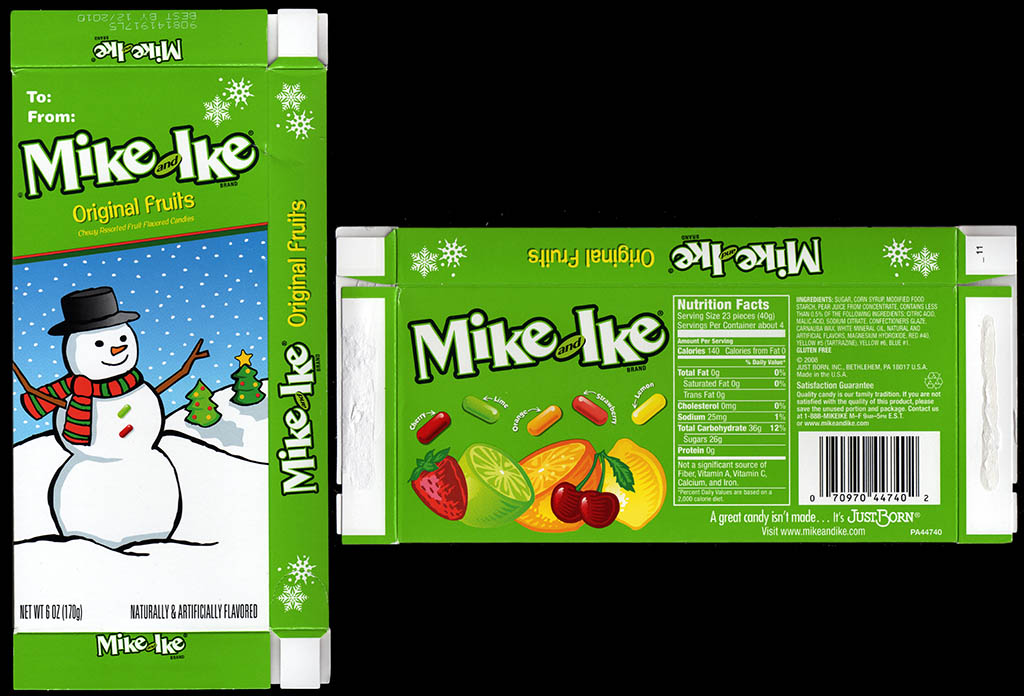 When the theater box size was reduced down to 5 ounces in 2012, the holiday boxes followed suit, with other subtle changes: 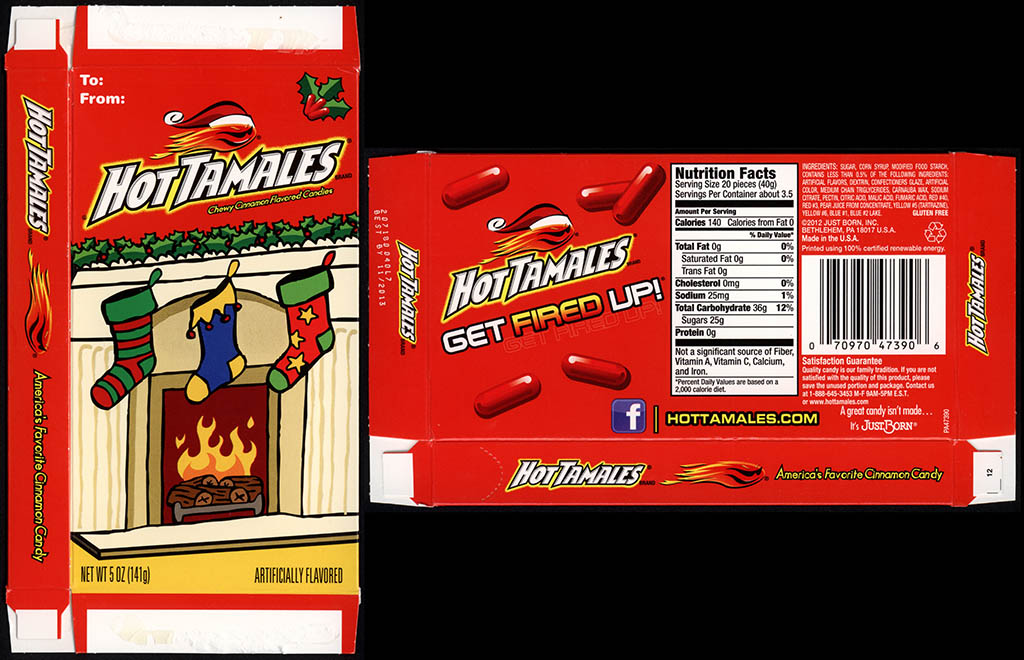 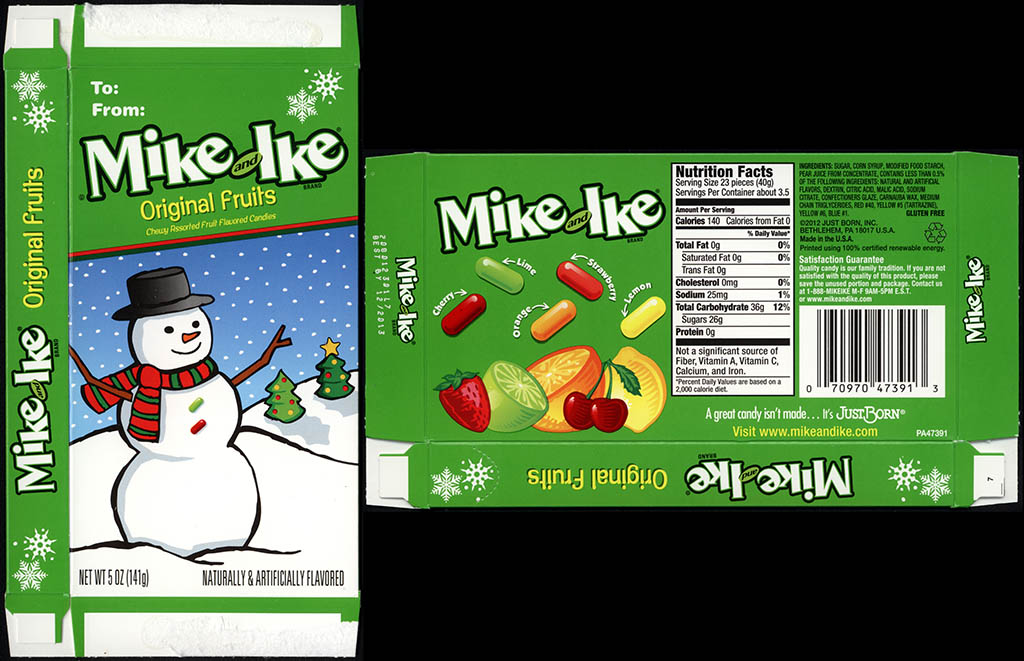 For 2013, the holiday edition box for Mike and Ike not only got the new redesign, but also a playful red-nosed reindeer! 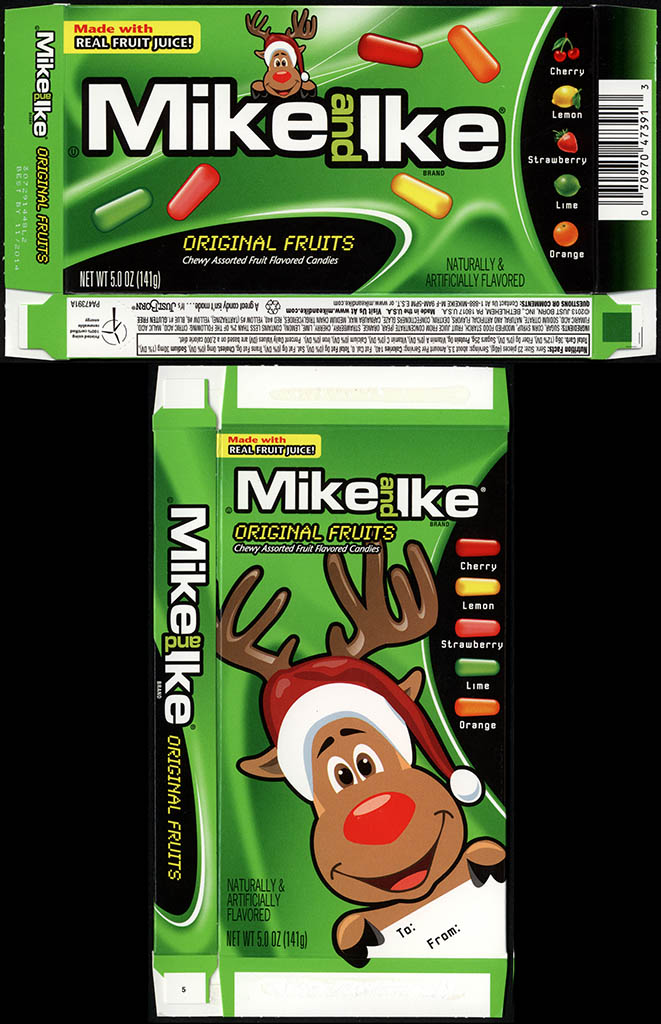 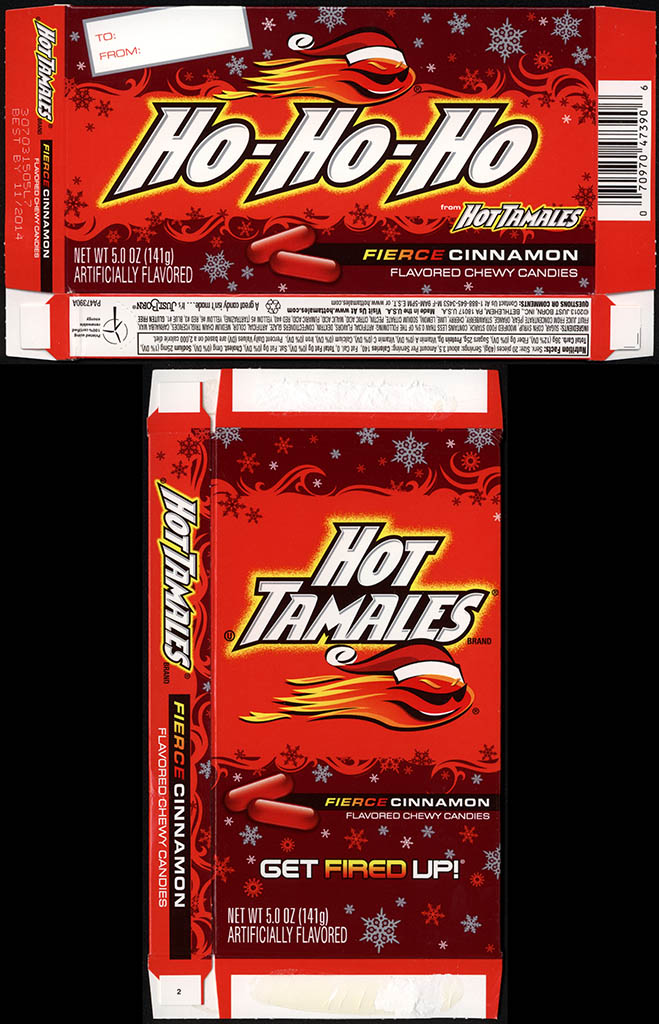 Beyond those, the 14-ounce bagged Mike and Ike Holiday Medley becomes Merry Mix.  Check out both versions: 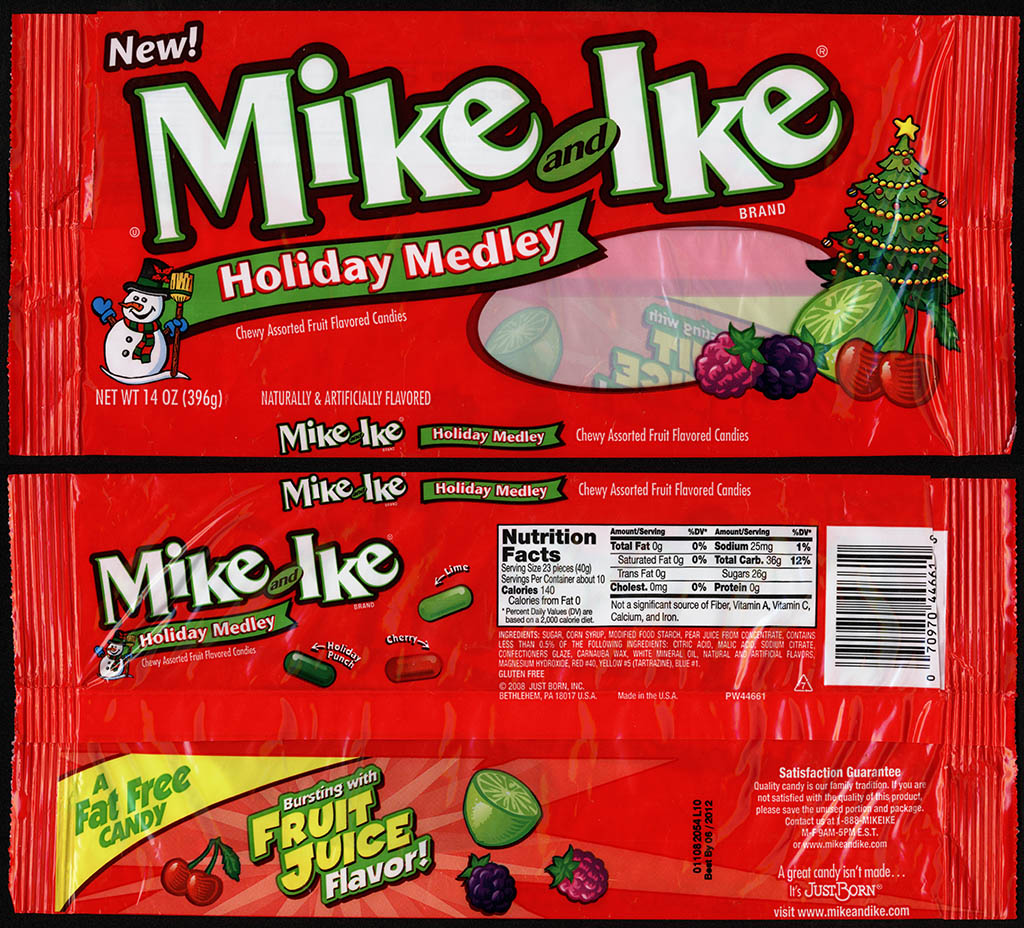 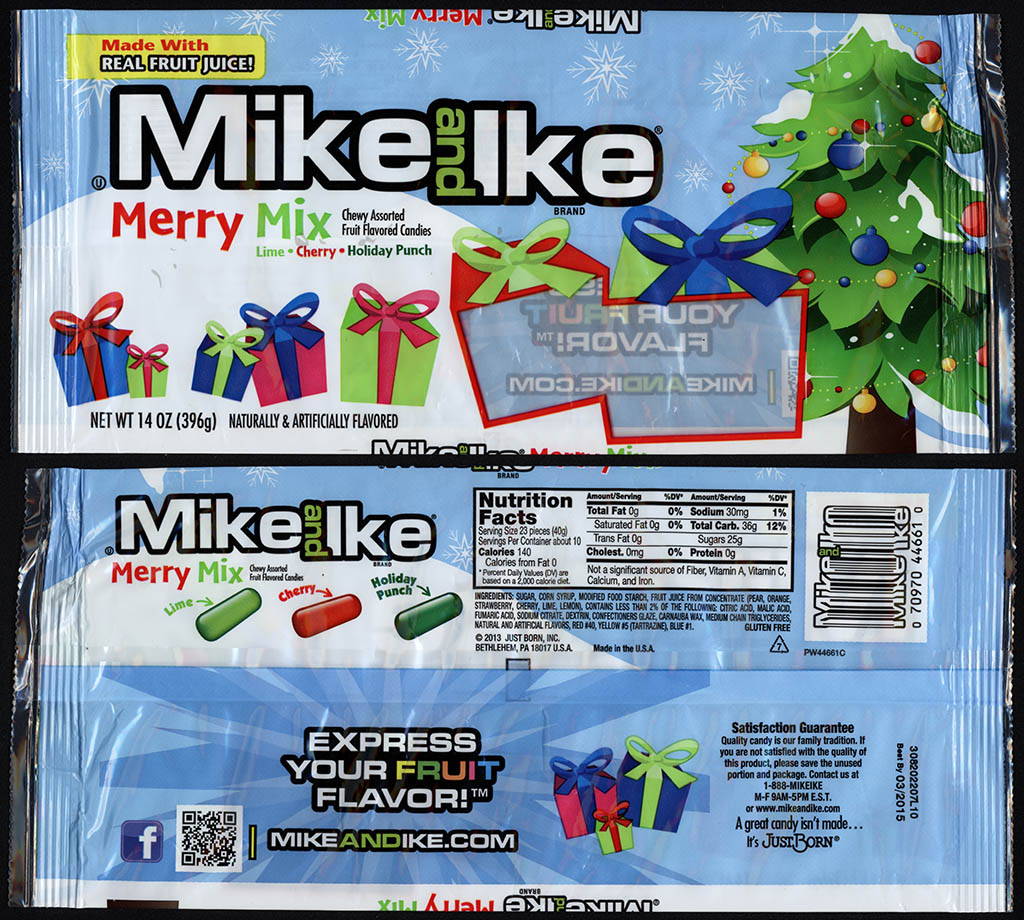 So across the board, Just Born presented fantastic holiday updates for their packaging this year.  Fun pieces that have been great to collect over the years.

And that’s everything for today’s entry in CollectingCandy.com’s 2013 Twelve Days of Christmas!  See you next time!

A New York City based writer, editor and sometimes actor. After spending much of the 1990′s in the comic book business helping tell the stories of Marvel Comics’ X-Men as series editor, he has since split his time between developing his own entertainment properties while still consulting and working on others. Having been described as “the Indiana Jones of lost and forgotten candy”, Jason is one of the country’s premier candy collectors and historians with his discoveries appearing in countless blogs, magazines, newspaper articles, and books. Always happy to share his knowledge and unique perspectives on this colorful part of our popular culture, Jason has consulted with New York’s Museum of Food and Drink and has also been a featured guest on Food Network’s Heavyweights, France’s M6 Capital, and New York’s TheActionRoom.com. My Google Profile+
View all posts by Jason Liebig →
This entry was posted in Boxed, Holiday and tagged candy collecting, candy collection, candy collector, candy wrapper collection, candy wrapper collector, Christmas, collectible, collecting candy, confectionery, confections, holiday, Hot Tamales, Just Born, mascot, Mike and Ike, packaging, sweets, vintage candy wrapper, winter, wrapper. Bookmark the permalink.

1 Response to Twelve Days of Christmas: A Decade of Christmas Hot Tamales & Mike and Ike!