I’m excited to announce that Hershey’s classic 1970’s Rally bar has returned to shelves across the nation!  Because of this unexpected-and-groovy news, I’m preempting the start of our Halloween Countdown coverage today to look back at the history of the Hershey Rally bar!

The Hershey Rally bar was first put on sale in 1970 and its initial marketing push is notable as it was done through outdoor advertisements: 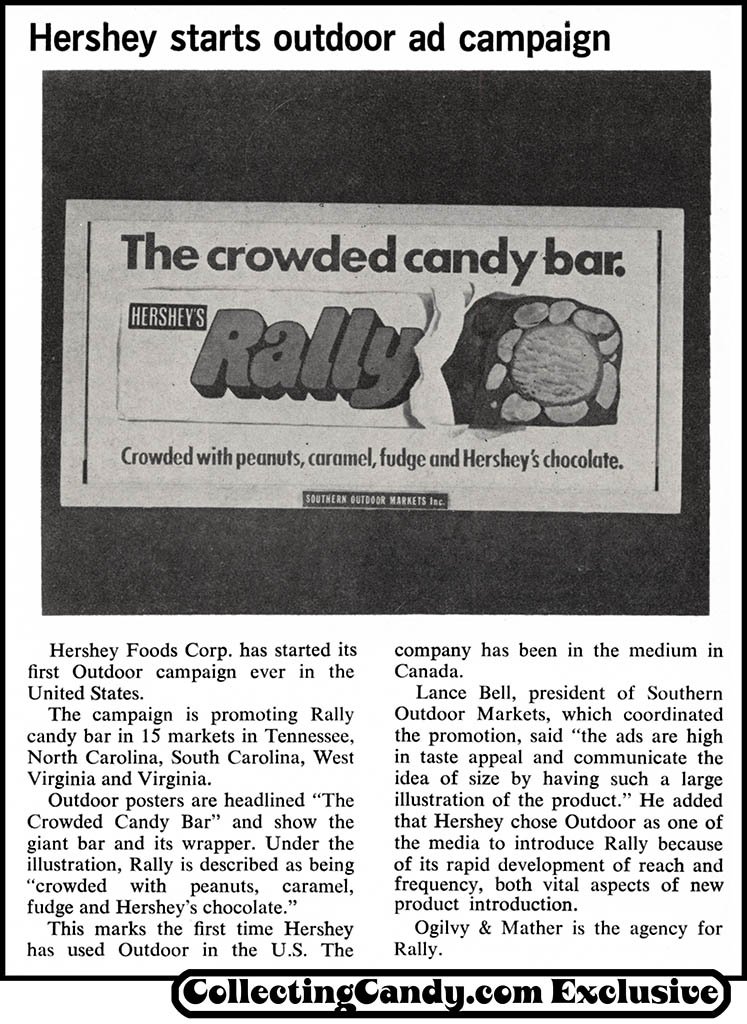 The Rally bar features one of the most striking 1970’s wrapper designs I’ve encountered.  With an awesome bit of extruded red type for the logo set upon what becomes a powerful plane of negative white space, it’s one that must have really stood out on store shelves.

I have two different pre-UPC, early 70’s Rally bar wrappers in my collection.  The two differentiate themselves by their listed weight: 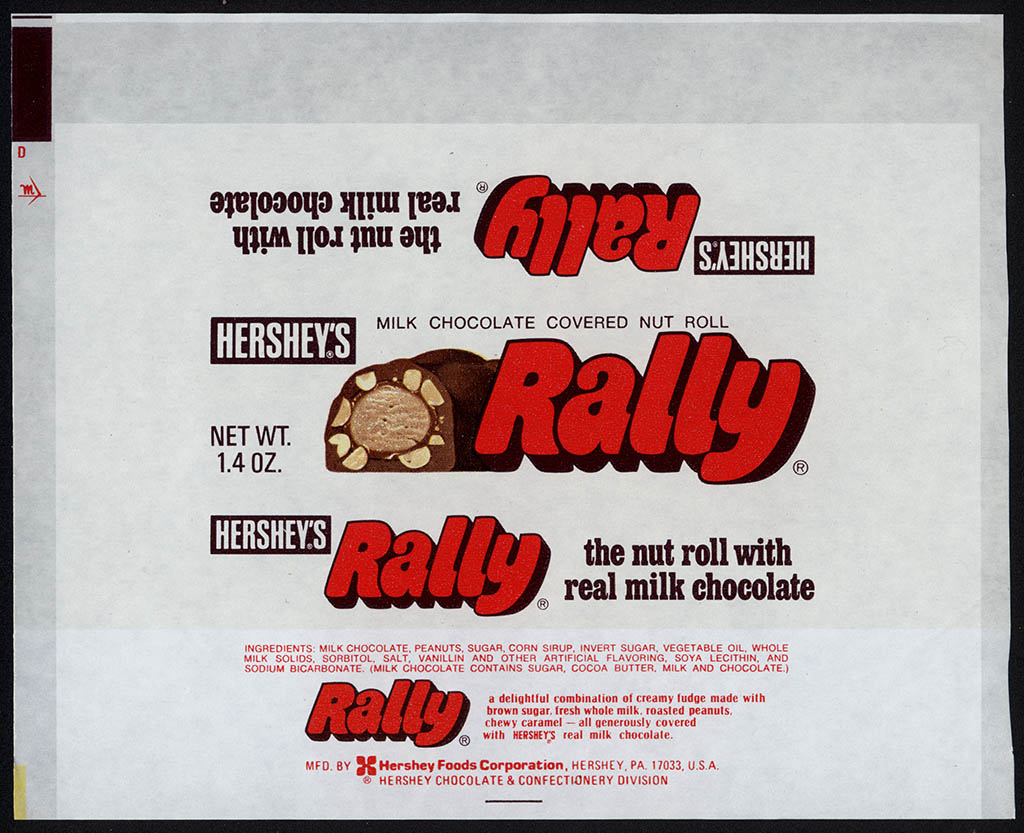 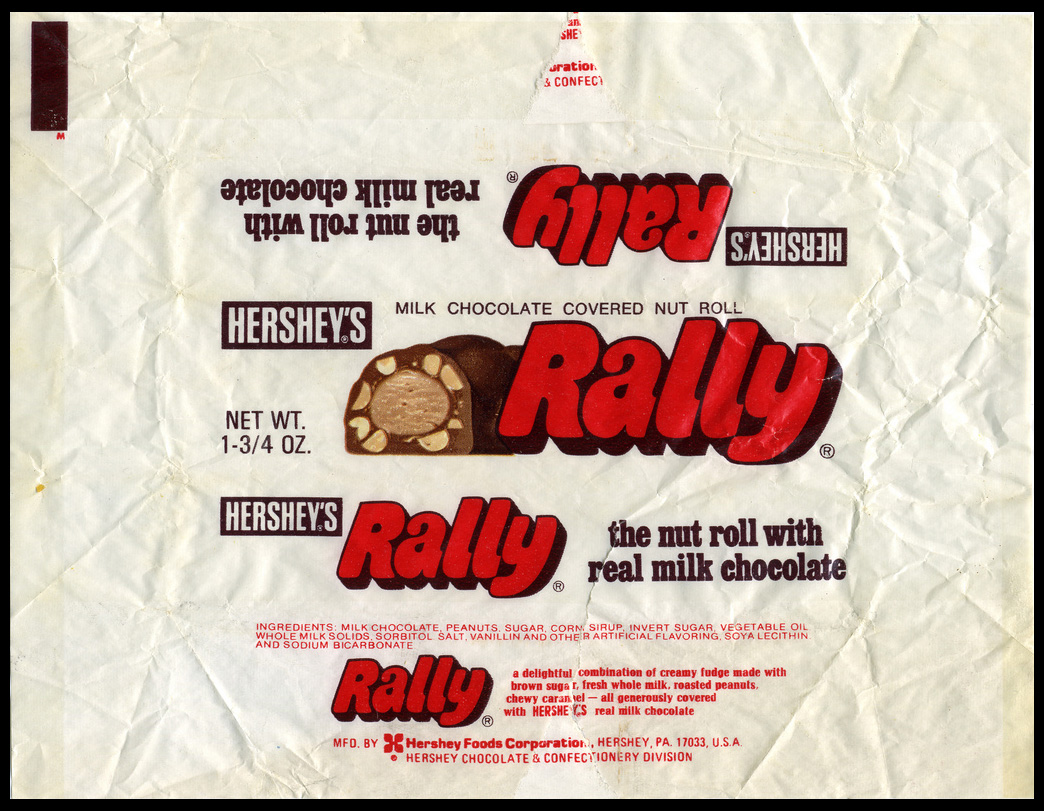 Determining the order and timeline of the Rally pieces in my collection has been difficult for me to do, as the only clear marker of order that I can draw upon is whether the wrappers are pre or post-UPC.  I do have two different “printed-on” price wrappers, and with those, my assumption is that the lower-cost version is earlier, but that might not even be the case, as the lower price could have reflected a lower weight.  Making things even less clear, the 15-cent wrapper has been trimmed to just the front section: 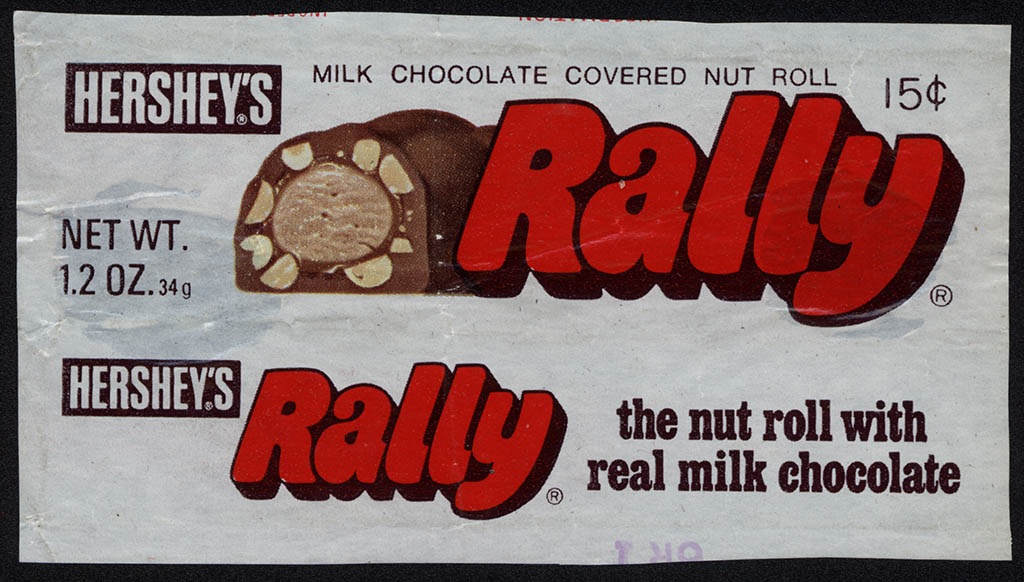 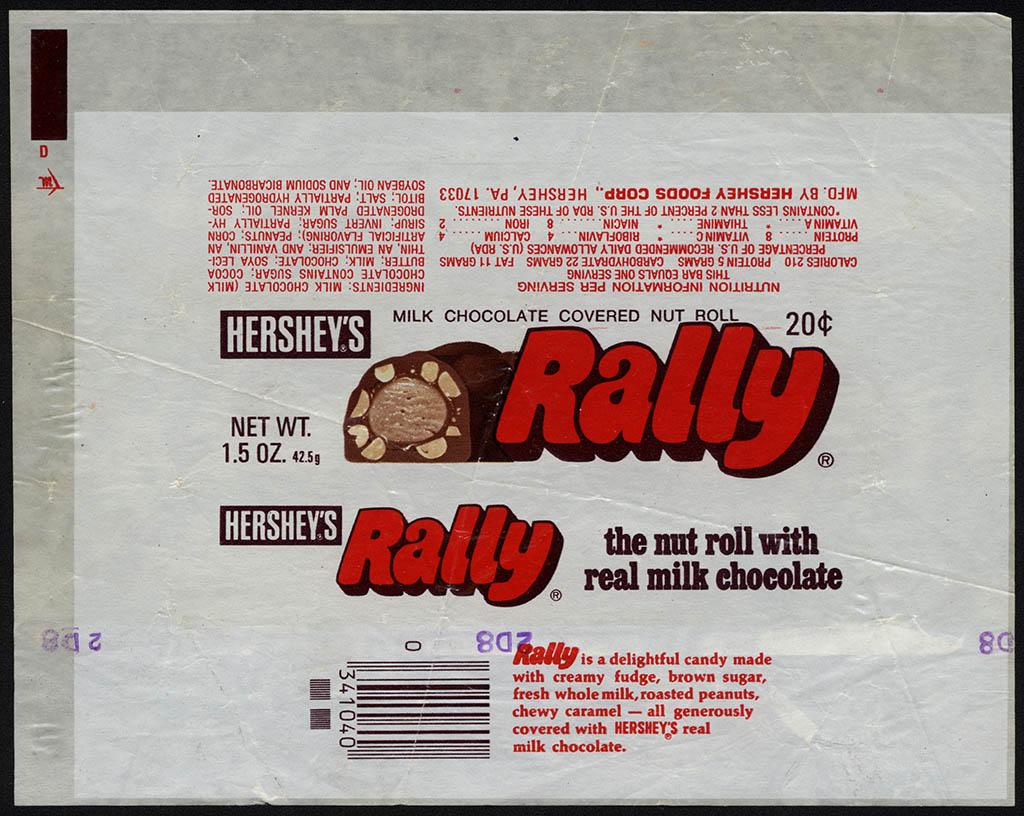 I also have a 1.2 oz post-UPC Rally wrapper without any printed-on price whatsoever:

Rally was a solid part of Hershey’s 1970’s lineup, and even warranted a groovy embroidered patch:

Rally was even popular enough for Hershey to give it a release north of the border up in Canada, as evidenced by the following wrapper: 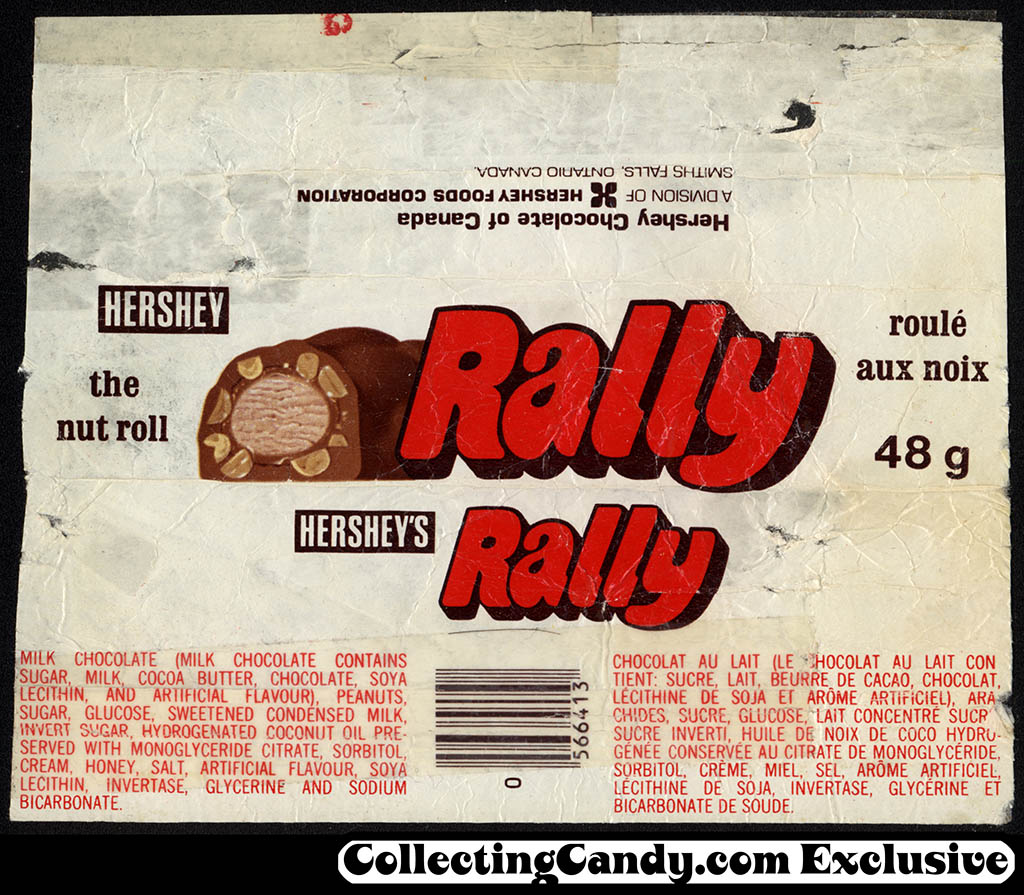 It would appear that by 1980, the Rally bar had been discontinued, at least here in the United States.

I suspect that during the ensuing years, the Rally bar found life with Hershey under different names and in different countries.  However, the next sighting of an actual Hershey Rally bar occurs in 2004, and comes courtesy of MikesCandyWrappers.com.  In spite of it being found in a dollar store in the United States, this bar was clearly intended for some kind of international distribution: 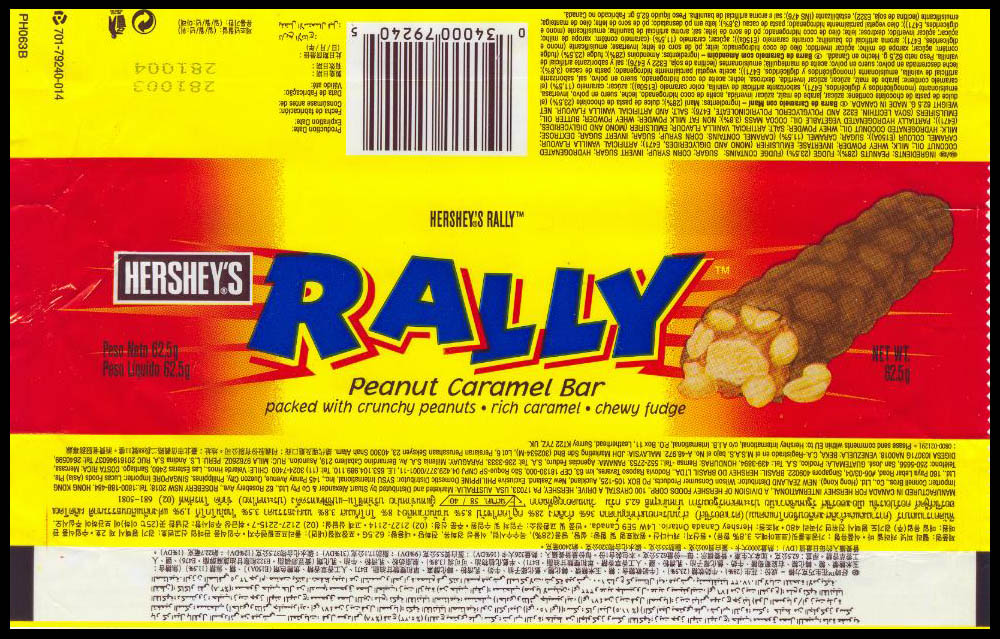 A few years later in 2008, the Rally bar would make its first official-yet-brief return to shelves here in the USA.   This time, it would appear possibly exclusively at Hershey World in Pennsylvania and in full 1970’s retro packaging.  [Note:  I’m not entirely clear on the distribution of this release, but there is evidence that it was exclusive to Hershey-owned retail outlets.]

My friend Cybele over at CandyBlog.net sampled and reviewed the 2008 Rally release at the time.  She later sent the empty wrappers to me, and here they are: 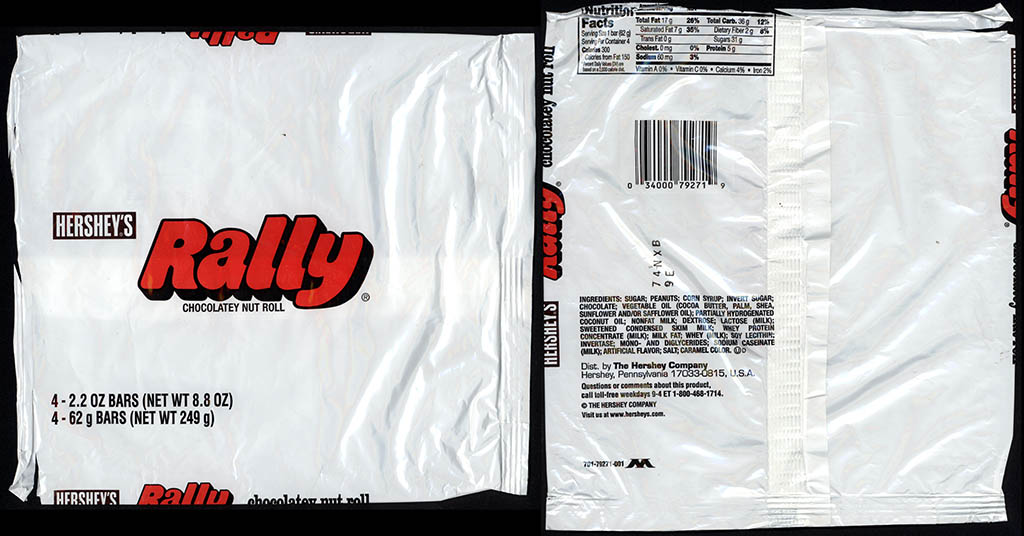 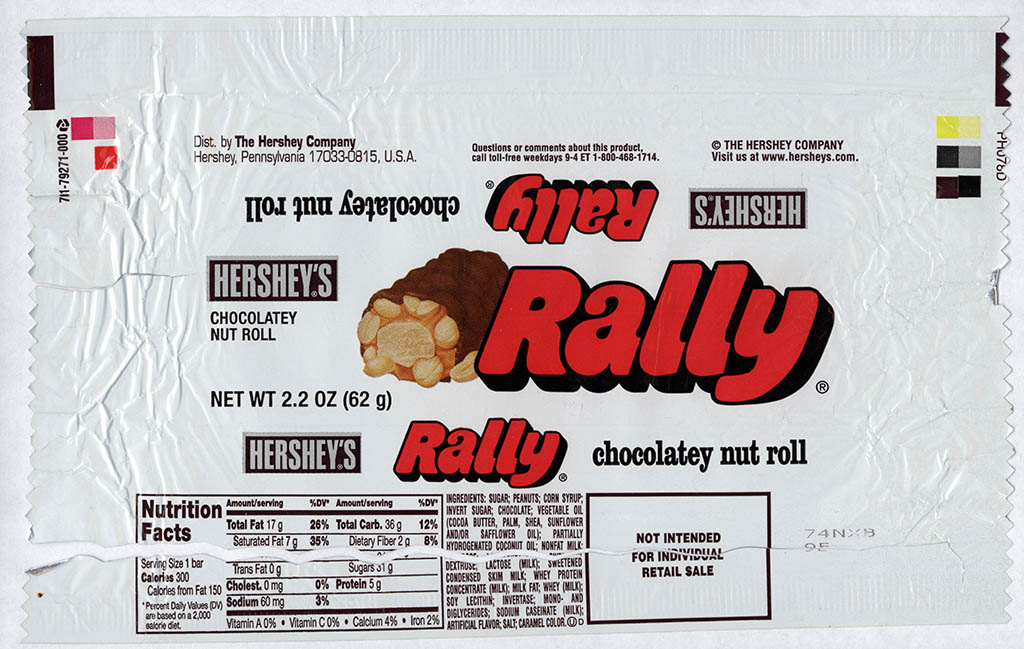 And so we’re up to the present and the reason for today’s alert post – the Rally bar has made a triumphant return in 2013.

I first heard the news in a voicemail from my lovely mother on Saturday night.  She said she “found a new Hershey Rally candy bar” at her local Walgreens store.  I wasn’t aware that Rally bar was making a comeback, but after the initial scoop from my mother and a trip to my nearby Walgreens store, I had them in hand.

I followed that up with an e-mail to my contact with the Walgreens corporate candy buyer, who confirmed that this new Rally bar is currently a Walgreens exclusive (though it may only be a “timed exclusive” that could be available everywhere in later months).

So here it is, the wrapper for the 2013 Hershey Rally bar, currently available exclusively at Walgreens stores: 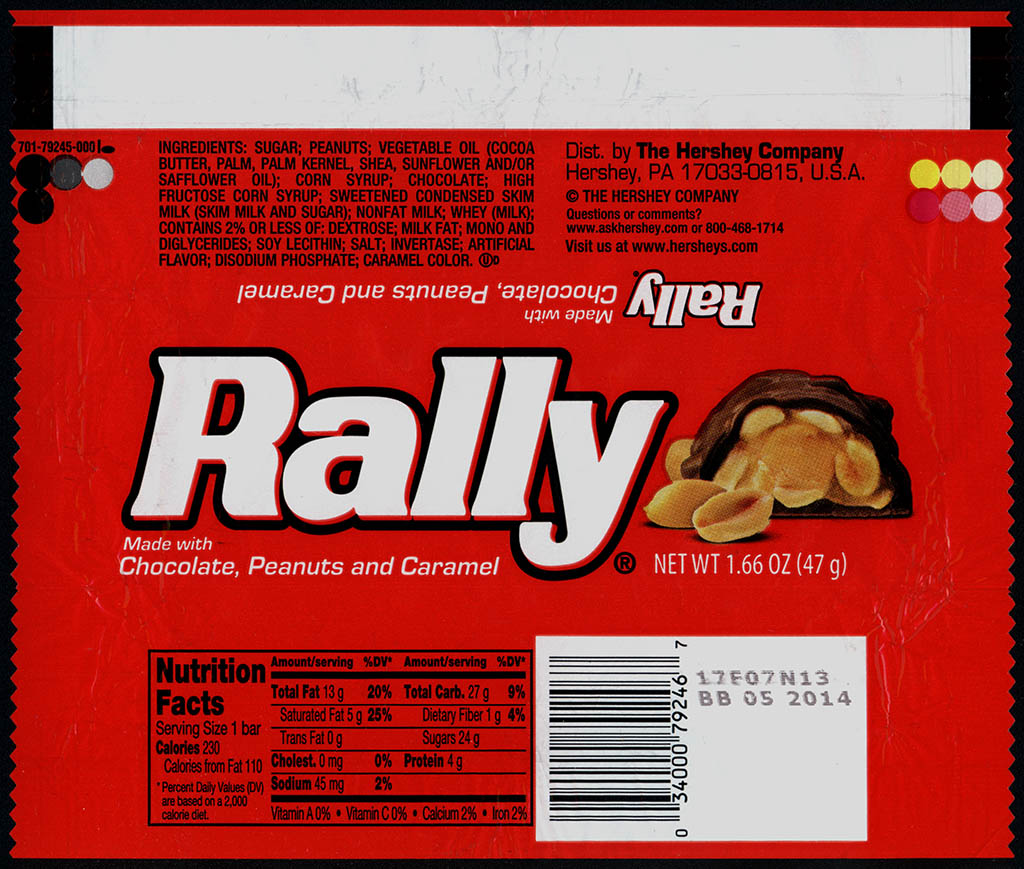 The new Rally wrapper design doesn’t take much from the classic 1970’s version, but it’s still a nice-looking package, and it’s awesome to see these back on store shelves.

As I said at the top of today’s post, Rally’s unexpected return was such big news that I felt the need to preempt my CountdownToHalloween kickoff, but it IS October 1st, so I can’t completely drop Halloween for today’s post.  With that in mind, here’s a close-up of a Rally bar Juniors Halloween package from a 1972 trade ad: 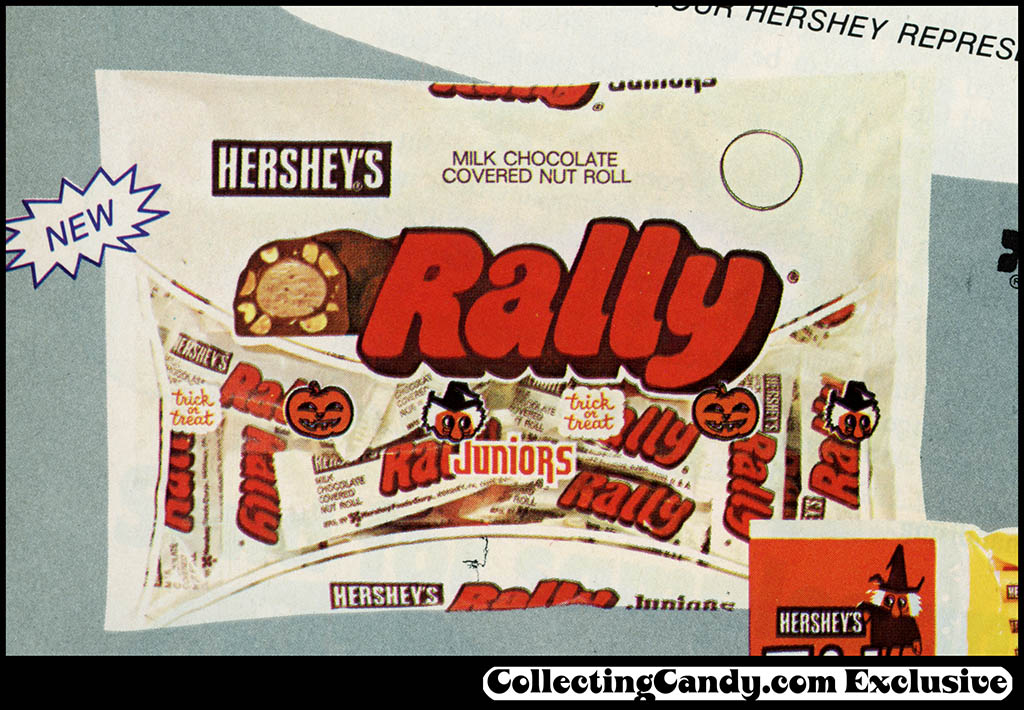 And speaking of Rally Juniors, I have a 1970’s wrapper for one of those right here:

And that’s everything for today’s coverage of the Return of Hershey’s Rally bar.  Stop back tomorrow for the kickoff of our 2013 CountdownToHalloween coverage – it’s going to be a lot of fun!

A New York City based writer, editor and sometimes actor. After spending much of the 1990′s in the comic book business helping tell the stories of Marvel Comics’ X-Men as series editor, he has since split his time between developing his own entertainment properties while still consulting and working on others. Having been described as “the Indiana Jones of lost and forgotten candy”, Jason is one of the country’s premier candy collectors and historians with his discoveries appearing in countless blogs, magazines, newspaper articles, and books. Always happy to share his knowledge and unique perspectives on this colorful part of our popular culture, Jason has consulted with New York’s Museum of Food and Drink and has also been a featured guest on Food Network’s Heavyweights, France’s M6 Capital, and New York’s TheActionRoom.com. My Google Profile+
View all posts by Jason Liebig →
This entry was posted in 1970's, Canadian, Chocolate, Halloween, Hershey and tagged 1970's candy, 70's candy, candy collecting, candy collection, candy collector, candy wrapper collection, candy wrapper collector, collectible, collecting candy, confectionery, confections, Hershey, packaging, sweets, vintage candy wrapper, wrapper. Bookmark the permalink.