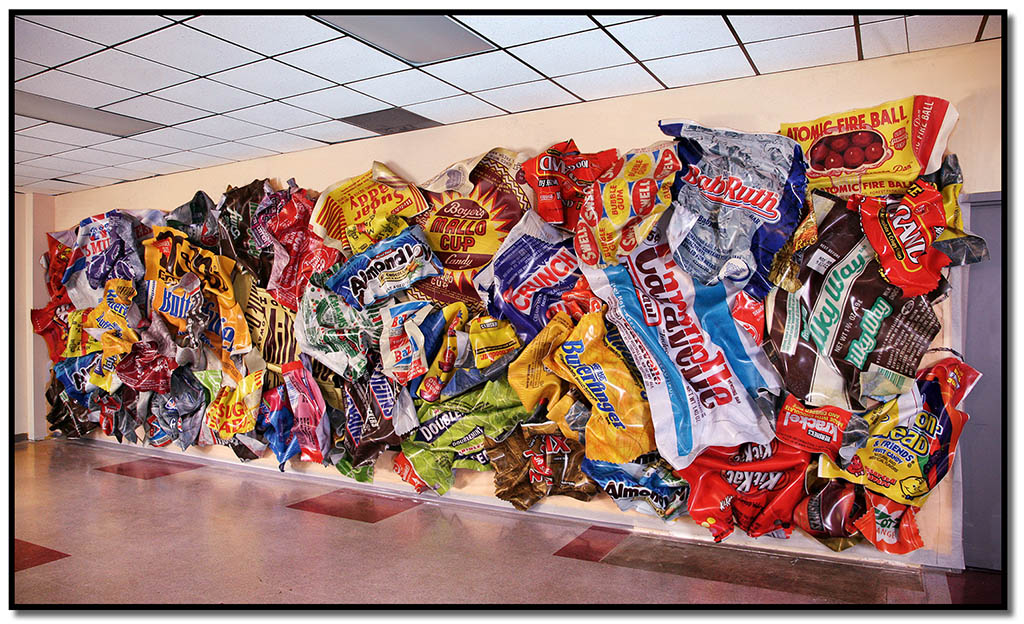 Paul Rousso is an artist and gentleman.  He’s also a madman and an evil genius who has transformed some of the pieces from my collection into an amazing giant work of art entitled “November 1st” — currently in consideration for the prestigious 2013 ArtPrize.

I first met Paul Rousso earlier this year when he contacted me about my work in documenting candy packaging and about utilizing pieces from my collection for some of his upcoming art.   Though we had our first conversations online, we would soon meet in New York City after I agreed to bring together and loan him an assortment of specific pieces he was seeking. 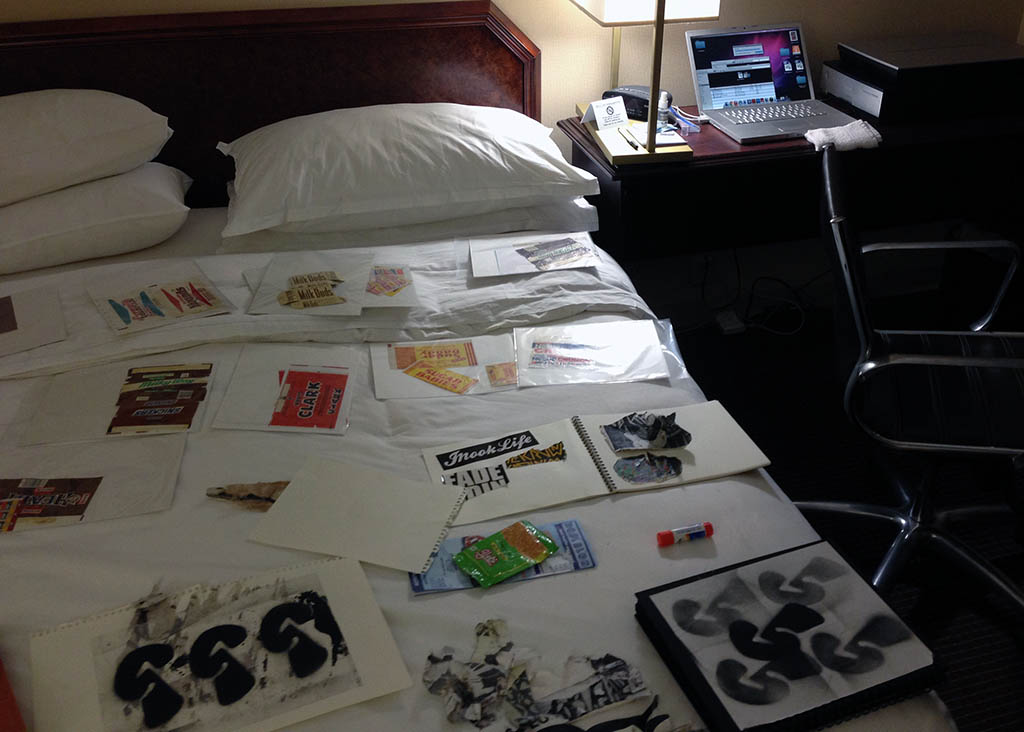 Wrappers laid out during my initial meeting with the artist.

As I said at the top of today’s post, Paul Rousso is to my assessment a wildly artistic madman.   He has spent much of his recent efforts creating work based on his fascination and experience with paper, and utilizing blow torches to do so.  To wit:

And while he might be a mad genius, Paul is also a charismatic and gracious conversationalist as we had a riotous time discussing art, design, nostalgia, the struggles of life and our mutual fascination with paper – as well as how paper seemed to be disappearing from our world.   Even Hershey Miniatures he lamented “…trick you into thinking they’re still paper wrapped around foil, but they’re not.”  [Note: For those that might not have realized, Hershey Miniatures wrappers are now a single piece of printed foil.]

So it was that after a trio of frenetic-yet-delightful late night meetings in New York City, Paul left with the material from my collection that he needed to help him create his entry into the 2013 ArtPrize competition, an extraordinary piece entitled “November 1st”.   Here are a series of photos of the piece that Paul has sent me along the way. 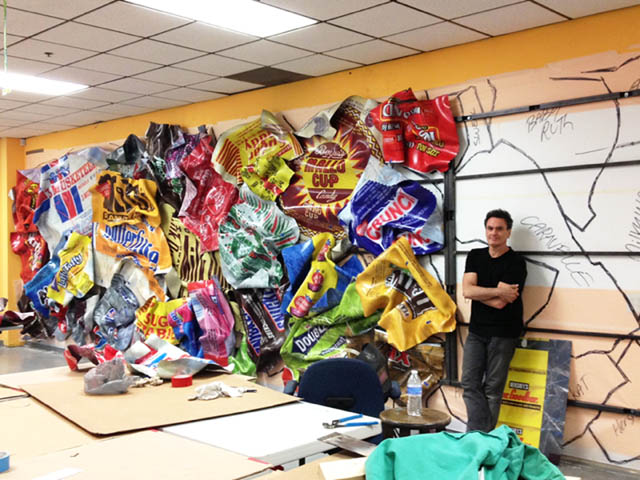 Paul next to his work-in-progress. 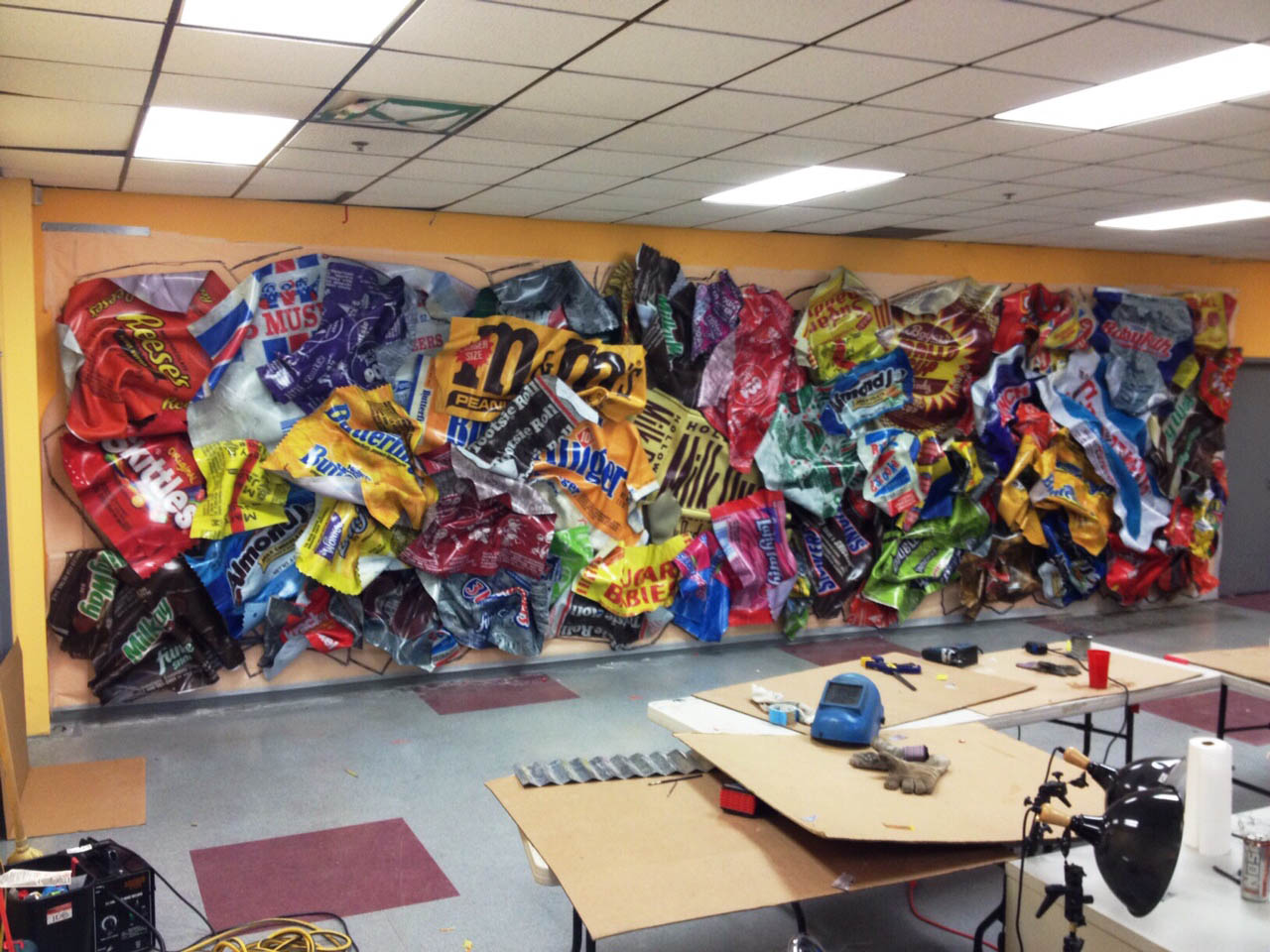 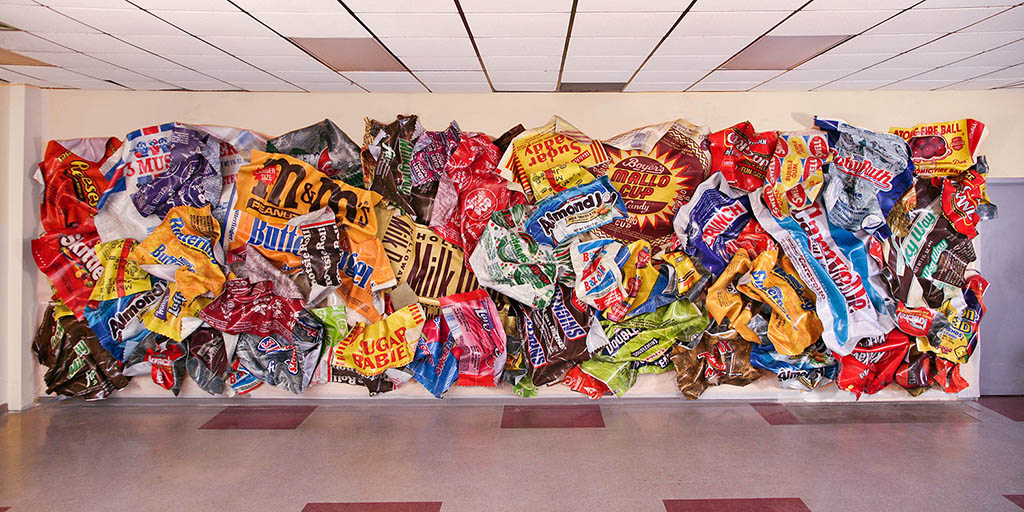 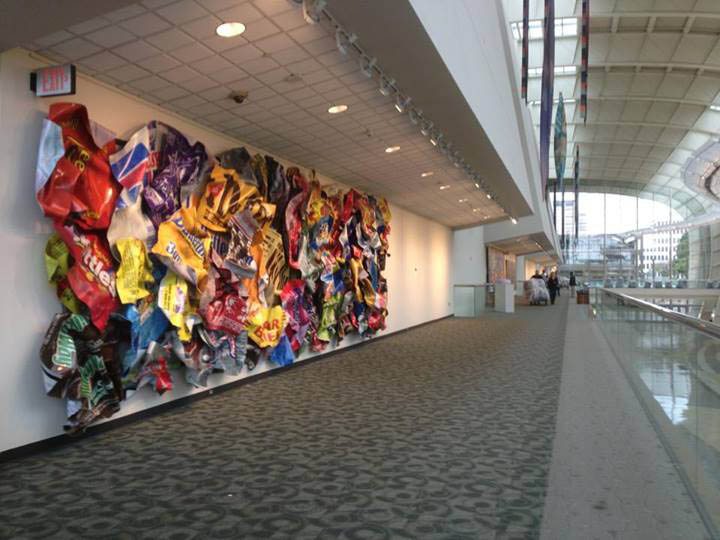 I’ve long felt that candy wrappers are in danger of becoming a lost part of our pop consumer culture, and I’ve committed my efforts to preserving and sharing them.  I value candy packaging not only for its nostalgia but also how it reflects trends in commercial art and product design and how the packaging reflects the people who were buying it.

Having the opportunity of working with Paul Rousso to help him get what he needed to create this new work became a bit of a conceptual full circle then for me personally.  Because for me, Paul’s “November 1st” is candy packaging being appreciated not just as consumer culture but as pop art – and I’ve long appreciated them in that way.  And that’s been one of the most exciting and unexpected directions that my hobby has taken me in.

Not only have I gotten to work with and get to know an artist whose work I admire, but in working with Paul Rousso I’ve developed a kinship and camaraderie that I hope and expect will last the rest of my days. 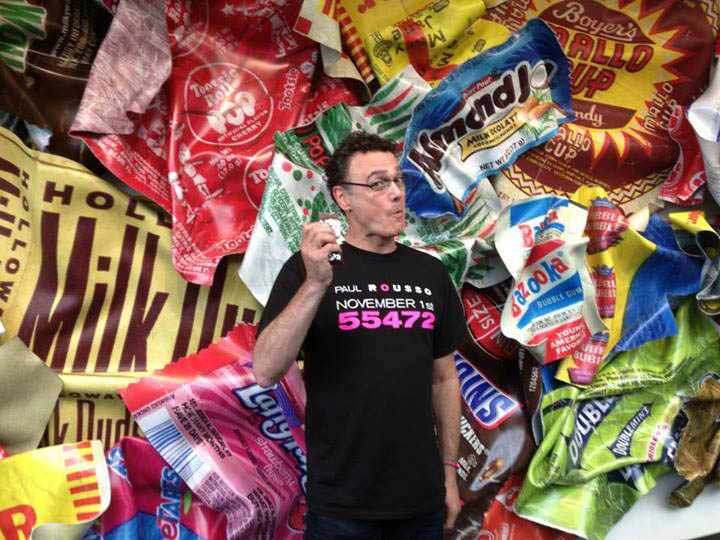 “November 1st” – A cheeky portrait of the artist, Paul Rousso.

ArtPrize 2013 runs from September 18th through October 6th and if you’re in the Grand Rapids, Michigan area I highly recommend you making the effort to experience it.  If you make it to ArtPrize and feel that it’s worthy, please place a vote for Paul Rousso’s ode to the day after Halloween, “November 1st”. 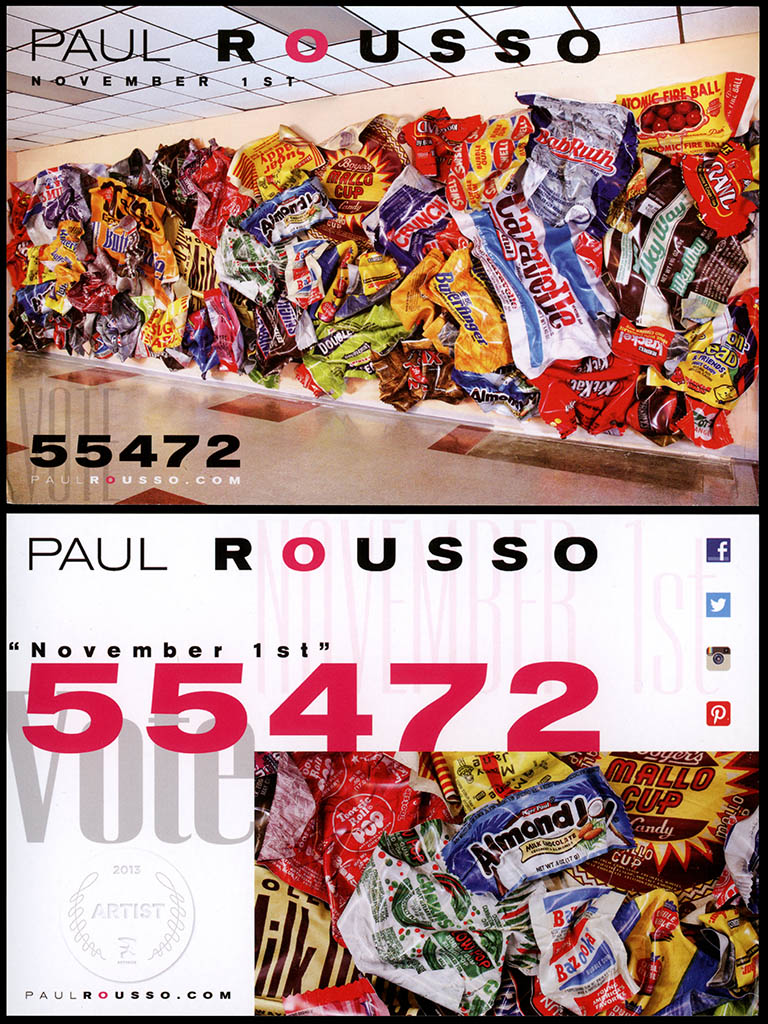 I hope to eventually sit down with Paul to discuss just how he came to bring candy into his artwork and when I do, I’ll be featuring that interview right here on this site.

But for now that’s everything for today’s post.  See you next time!

P.S.  Here are a few of the pieces that were included in “November 1st” – I’m sure you can spot them: 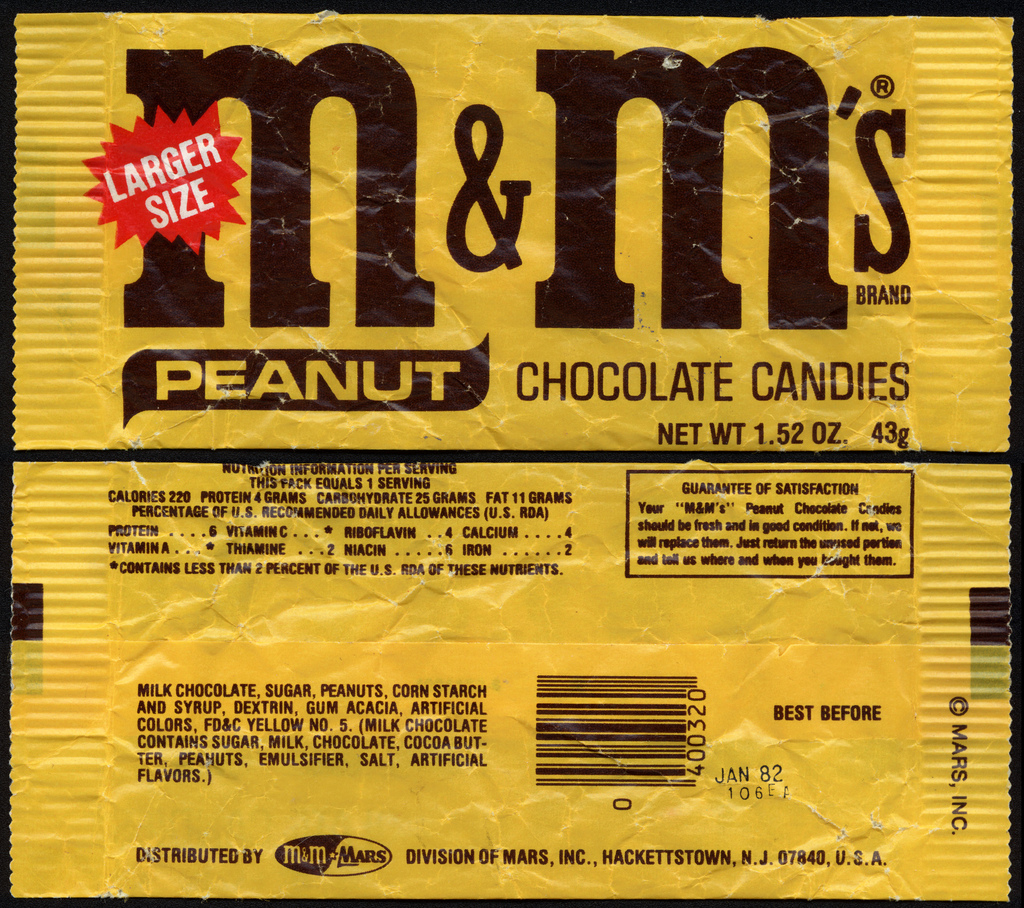 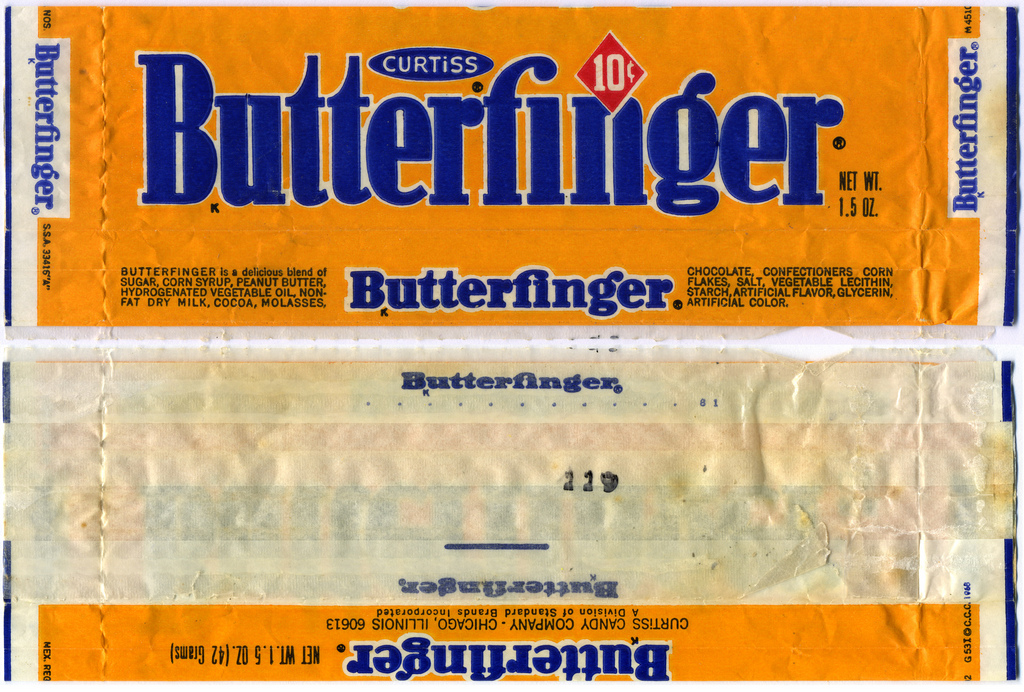 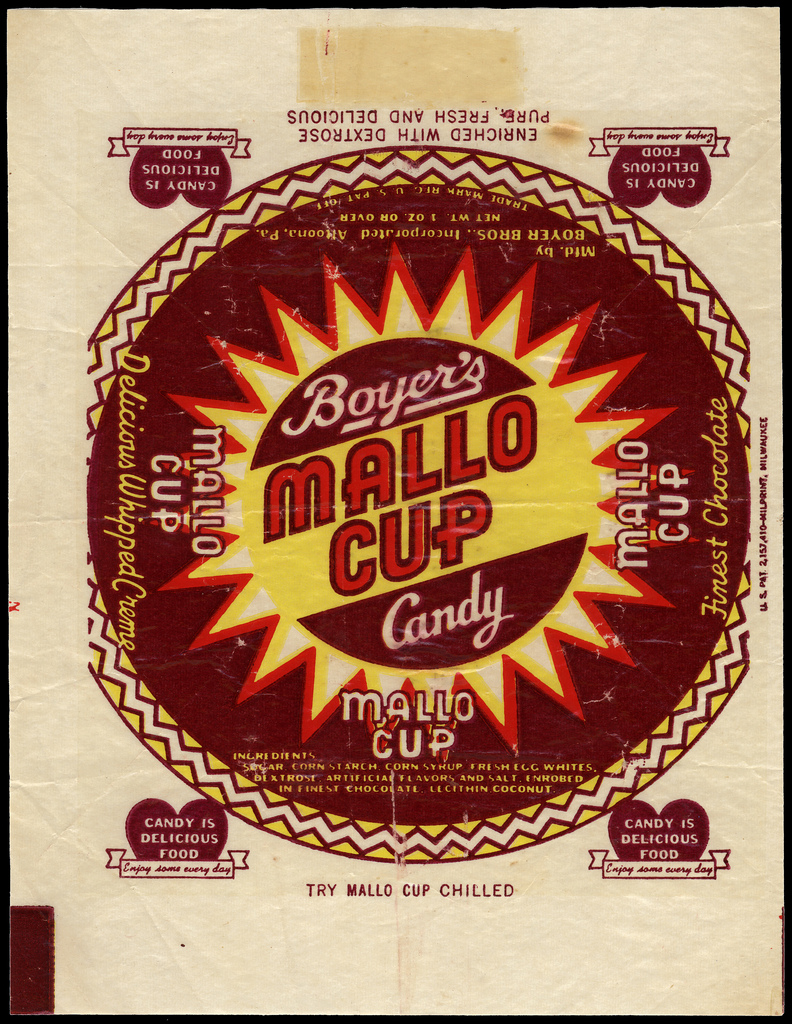 A New York City based writer, editor and sometimes actor. After spending much of the 1990′s in the comic book business helping tell the stories of Marvel Comics’ X-Men as series editor, he has since split his time between developing his own entertainment properties while still consulting and working on others. Having been described as “the Indiana Jones of lost and forgotten candy”, Jason is one of the country’s premier candy collectors and historians with his discoveries appearing in countless blogs, magazines, newspaper articles, and books. Always happy to share his knowledge and unique perspectives on this colorful part of our popular culture, Jason has consulted with New York’s Museum of Food and Drink and has also been a featured guest on Food Network’s Heavyweights, France’s M6 Capital, and New York’s TheActionRoom.com. My Google Profile+
View all posts by Jason Liebig →
This entry was posted in 1950's, 1960's, 1970's, 1980's, 1990's, Boxed, Bubble Gum, Chocolate, Hershey, M&M's, Mars, Nestle, Topps and tagged candy collecting, candy collection, candy collector, candy wrapper collection, candy wrapper collector, collectible, collecting candy, confectionery, confections, packaging, Paul Rousso, sweets, vintage candy wrapper, wrapper. Bookmark the permalink.