Sugarpova! And the wild U.S. Open marketing stunt that almost was.

Maria Sharapova is currently one of the most successful and popular tennis players in the world and she’s used that on-court success to branch out into other areas — one of which being confection with her Sugarpova candy brand.   Today I’d like to cover the Sugarpova brand but I’d also like to highlight one of the greatest candy-marketing stunts that almost was.

The Sugarpova candy line was launched in August of 2012 with attractive, stylish packaging (some of which I’ll be showing later) containing a range of gummy candy and in some cases bubble gum balls that look remarkably like miniature tennis balls (but fortunately taste much better).   It’s a premium brand packaged to give the candy a boutique presentation – think candy packaging designed for an Apple store – it’s clean and white with a striking splash of color to identify the attitude of the contents.

By all accounts the Sugarpova launch and subsequent roll-out has been successful and based on how it’s been marketed I’m not surprised.  But in the lead-up to the 2013 U.S. Open, Sugarpova had plans in motion that would have created the biggest tennis-related candy promotion since Bobby Riggs boisterously challenged Billy Jean King to a televised “Battle of the Sexes” tennis match — all while heavily promoting the Sugar Daddy brand.  You see, Maria Sharapova wanted to legally change her name to Maria Sugarpova for the duration of the U.S. Open tournament. 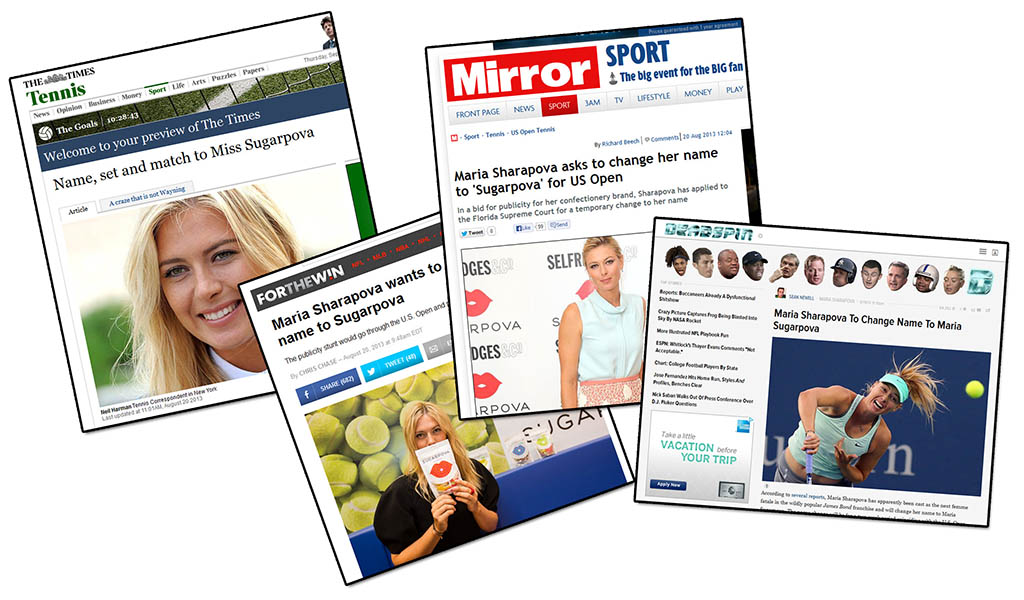 The news of Sharapova’s name change quickly spread through the media, but after consideration of the legal hoops required to make the change legal the plan was nixed.   The change would have created too many subsequent logistical problems for the athlete and businesswoman, and perhaps it just wasn’t meant to be as had the name change occurred, it wouldn’t have mattered as Sharapova ended up withdrawing from the 2013 U.S. Open due to an injury.

So one of the greatest tennis-related candy promotional stunts didn’t come together, but it sure would have been fun if it had.  Imagine the sportscasters adjusting to the name change and the inevitable discussion it would have warranted.  It would have been something to see.

But even though this bit of wild name-change marketing didn’t happen, we are confident that the Sugarpova team has a lot more up their sleeves.  We’ll be watching.

I should note that while I’d been aware of the Sugarpova line, it was the news of Sharapova’s potential name change that prompted me to finally seek out examples of them to buy and try.

So without further ado I’d like to share the range of packages from the Sugarpova line that I’ve picked up thus far.   The packaging has a clean, unified look with a set of illustrated pop-art lips being the strongest differentiation between them.  Here they are: 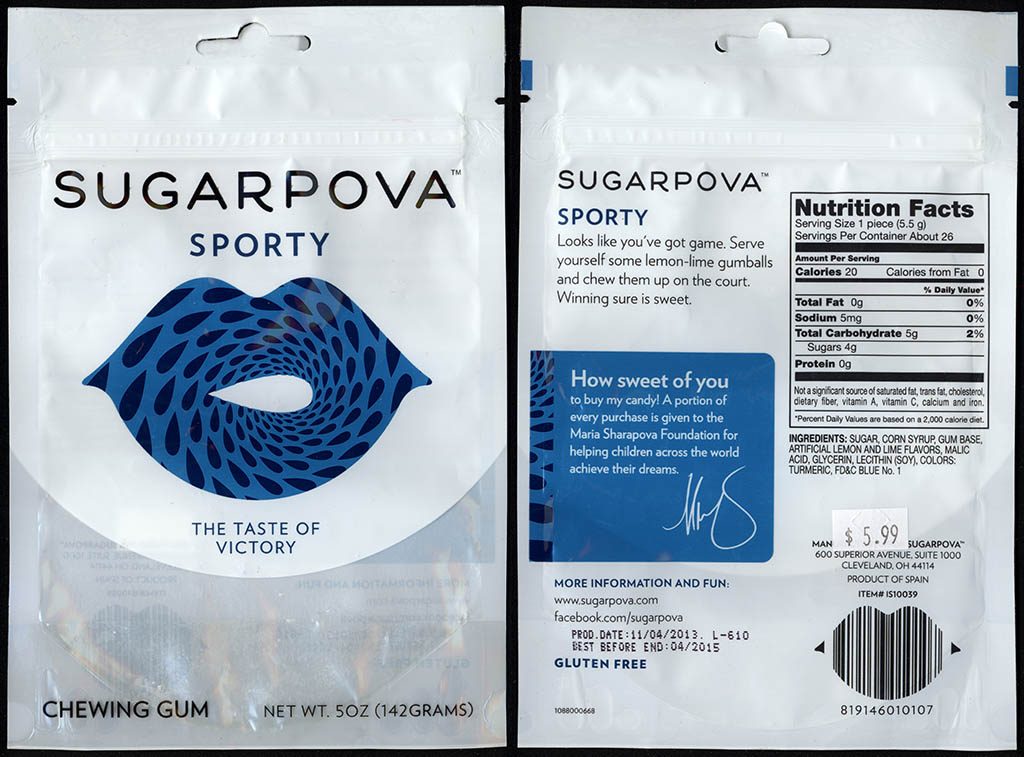 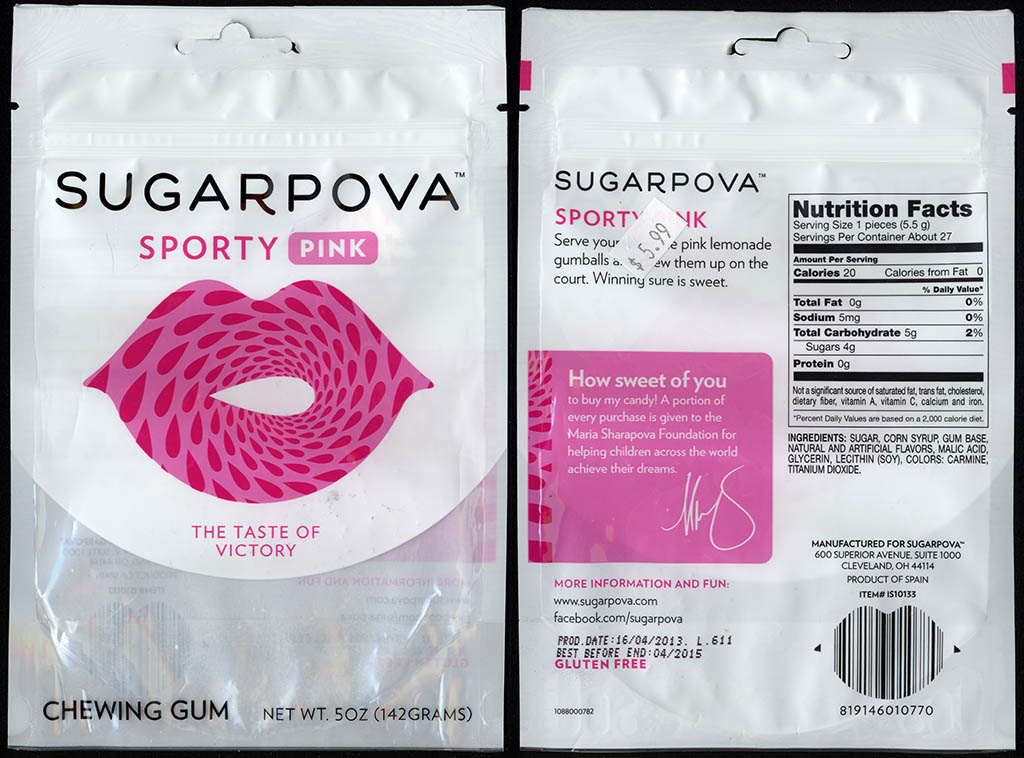 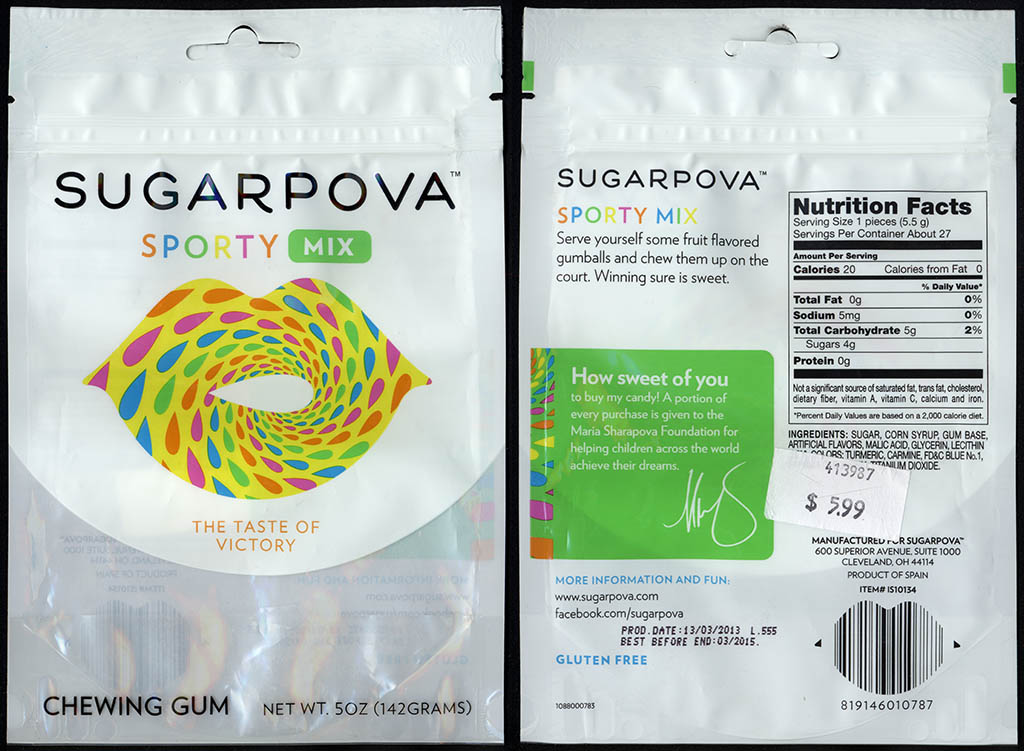 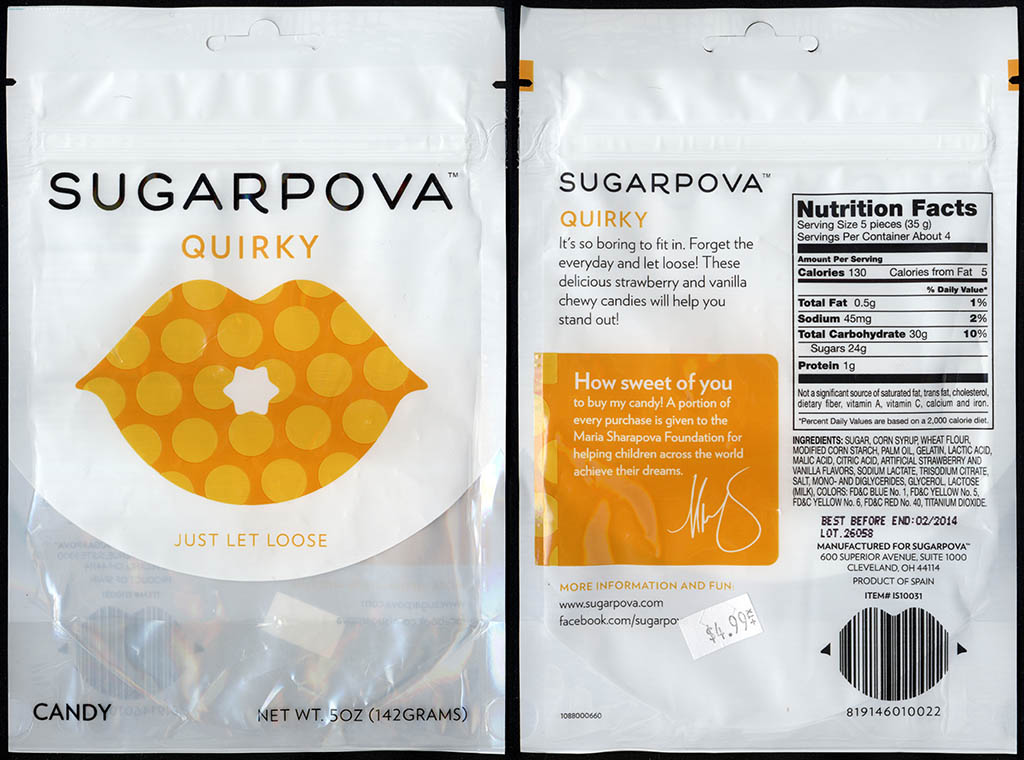 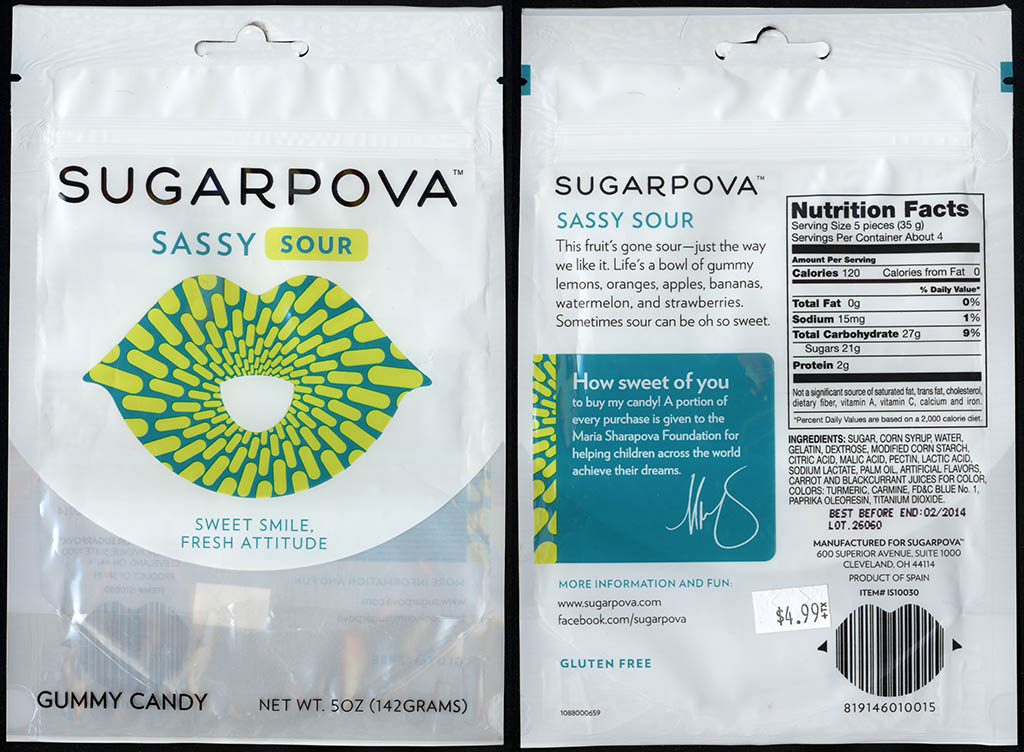 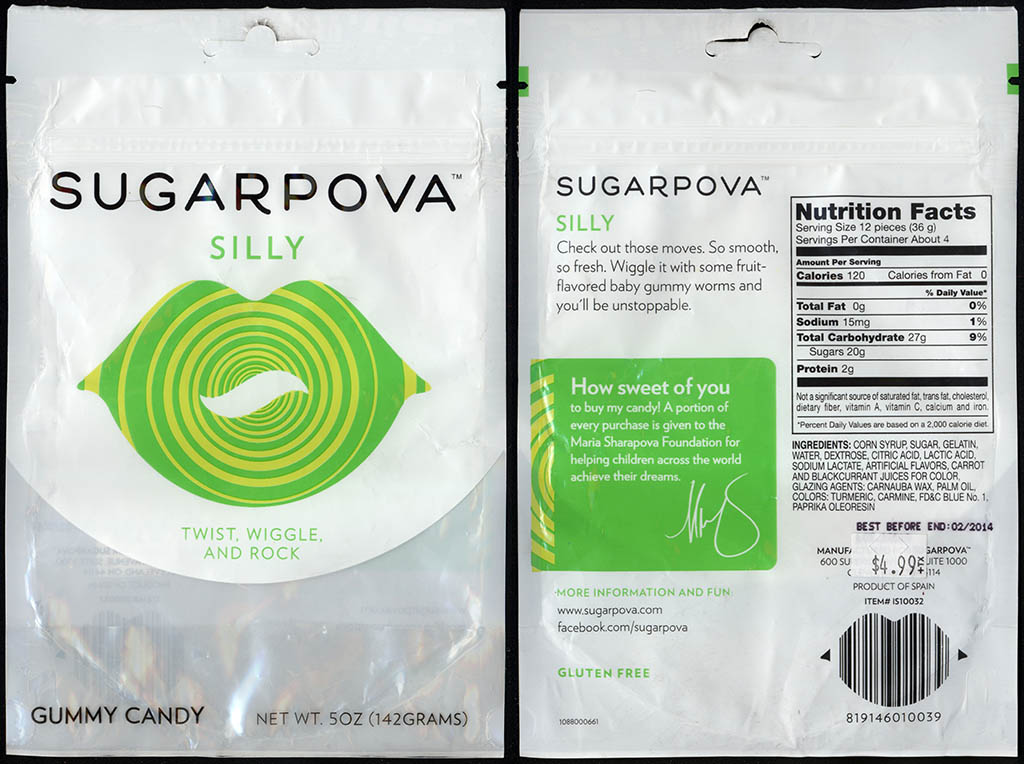 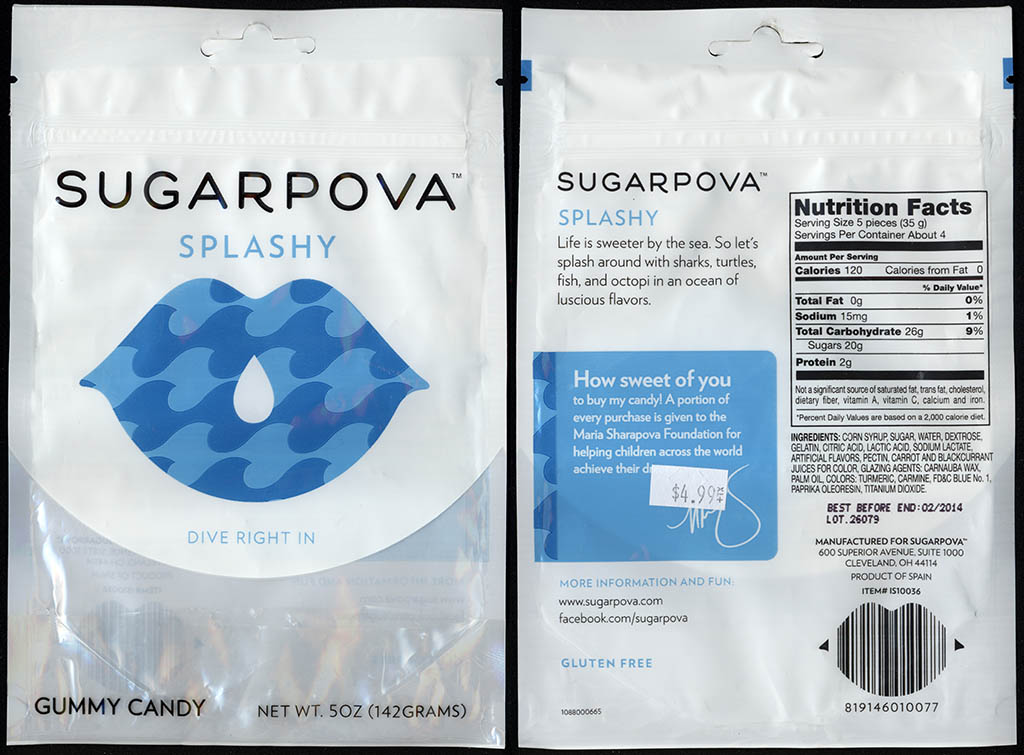 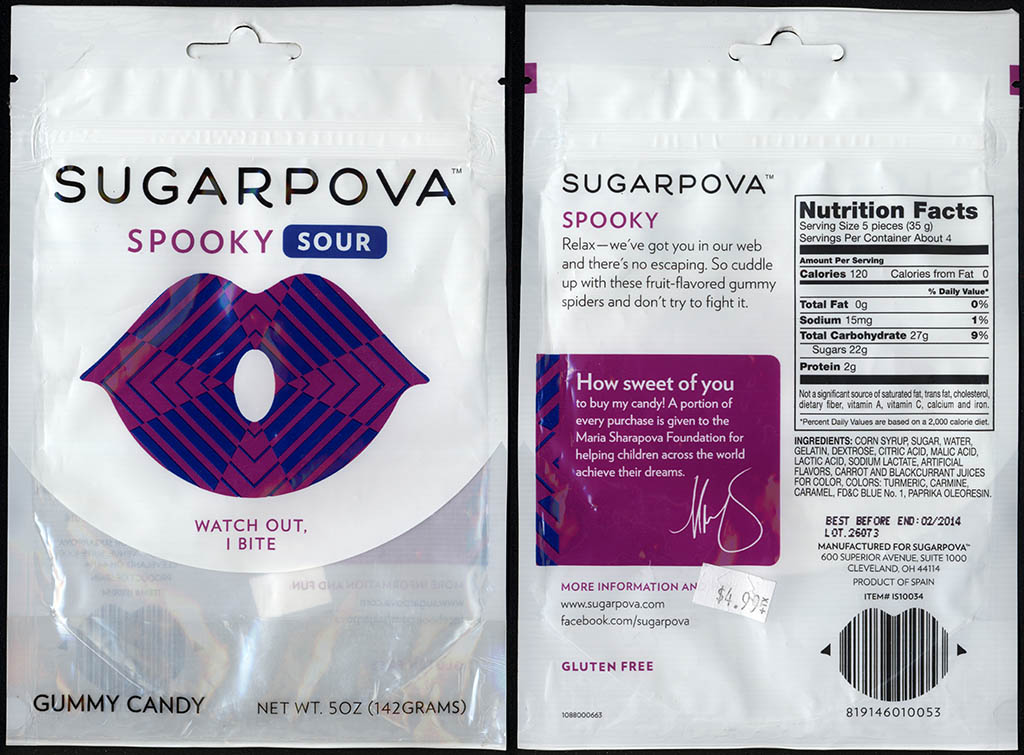 I’ve looked on the Sugarpova site and there are other flavors I have yet to find, so this isn’t the full range of packaging but it is all that I’ve got so far.

And that’s everything for today and my take on the greatest tennis/candy marketing stunt that almost was.

[Historical note: Maria Sharapova isn’t the first tennis player to get their name on a confectionery product, as I revealed last year with the Bjorn Borg candy bar.]

A New York City based writer, editor and sometimes actor. After spending much of the 1990′s in the comic book business helping tell the stories of Marvel Comics’ X-Men as series editor, he has since split his time between developing his own entertainment properties while still consulting and working on others. Having been described as “the Indiana Jones of lost and forgotten candy”, Jason is one of the country’s premier candy collectors and historians with his discoveries appearing in countless blogs, magazines, newspaper articles, and books. Always happy to share his knowledge and unique perspectives on this colorful part of our popular culture, Jason has consulted with New York’s Museum of Food and Drink and has also been a featured guest on Food Network’s Heavyweights, France’s M6 Capital, and New York’s TheActionRoom.com. My Google Profile+
View all posts by Jason Liebig →
This entry was posted in Bubble Gum, Gummies, Sour Candy and tagged candy collecting, candy collection, candy collector, candy wrapper collection, candy wrapper collector, celebrity, collectible, collecting candy, confectionery, confections, licensed, packaging, Sharapova, Sugarpova, sweets, tennis, US Open, vintage candy wrapper, wrapper. Bookmark the permalink.

3 Responses to Sugarpova! And the wild U.S. Open marketing stunt that almost was.