On February 7th of 2012 (only the second day of publication for this site) I wrote a short post about Bubblicious gum that mentioned my colorful collection of nine different Japanese Bubblicious packs.

Since then my collection has nearly doubled in size to sixteen different packs and that seemed like a nice number of new pieces to share.

Before I show you the packs I’ve brought together for today’s post, I’d like to discuss the means by which I’ve added them to my collection.

Japan has a wonderful fascination with exotic flavored confections and with releasing limited editions of said flavors (I’ll eventually share my collection of Japanese Kit Kat packages here, which demonstrate this well).   But living in the United States does not make it easy to acquire them.

The good news is that for candy enthusiasts like myself – we have options.  There are sellers on eBay who provide the service of getting these awesome Japanese treats out to those of us around the globe who want them.  I would like to mention two of them.

Over the years I’ve had great dealings with a pair of eBay sellers:  NapaJapan and Alluring Japan.   Always professional and reliable, these are the folks I check with first when I’m looking for the latest Japanese goodies.  So if you ever want to sample some groovy Japanese confections, either one of those sellers come with my highest recommendation.

I’ve only been getting Japanese Bubblicious packs since late 2009 – so I’m missing the releases that came out before I was keen to them.  [Note:  The earliest mention of special Japan Bubblicious flavors I could find was 2007 so I’ve certainly missed a few – I know I missed Amino Quench!]

Since I started collecting Japanese Bubblicious flavors, I’ve managed to stay on top of the new releases, though I’ve always wanted to find someone who had the older ones for sale or trade (I haven’t even been able to uncover any kind of list of what came out before – but I am pretty sure there were a few).   So if anyone out there has the older packs or even images of them – drop me a line!

Also, if any readers out there can help me navigate to the contact e-mail of the Japanese Bubblicious website, I’d love to get in touch with them to ask some of these questions – it’s over at www.bubb.jp.

Now that the introduction is out of the way, let’s take a look at some cool Japanese Bubblicious packs!  [Note: The dates I’ve listed with each pack don’t correspond exactly with when these were released, but rather are the dates when I purchased them.   That said, I always purchased these during their initial runs so the dates are close to when they were first released.]

Ramune Soda flavor is sort of like a 7-Up or Sprite flavor.

Now that you’ve seen them individually here’s a group sizzle shot of all sixteen packs together: 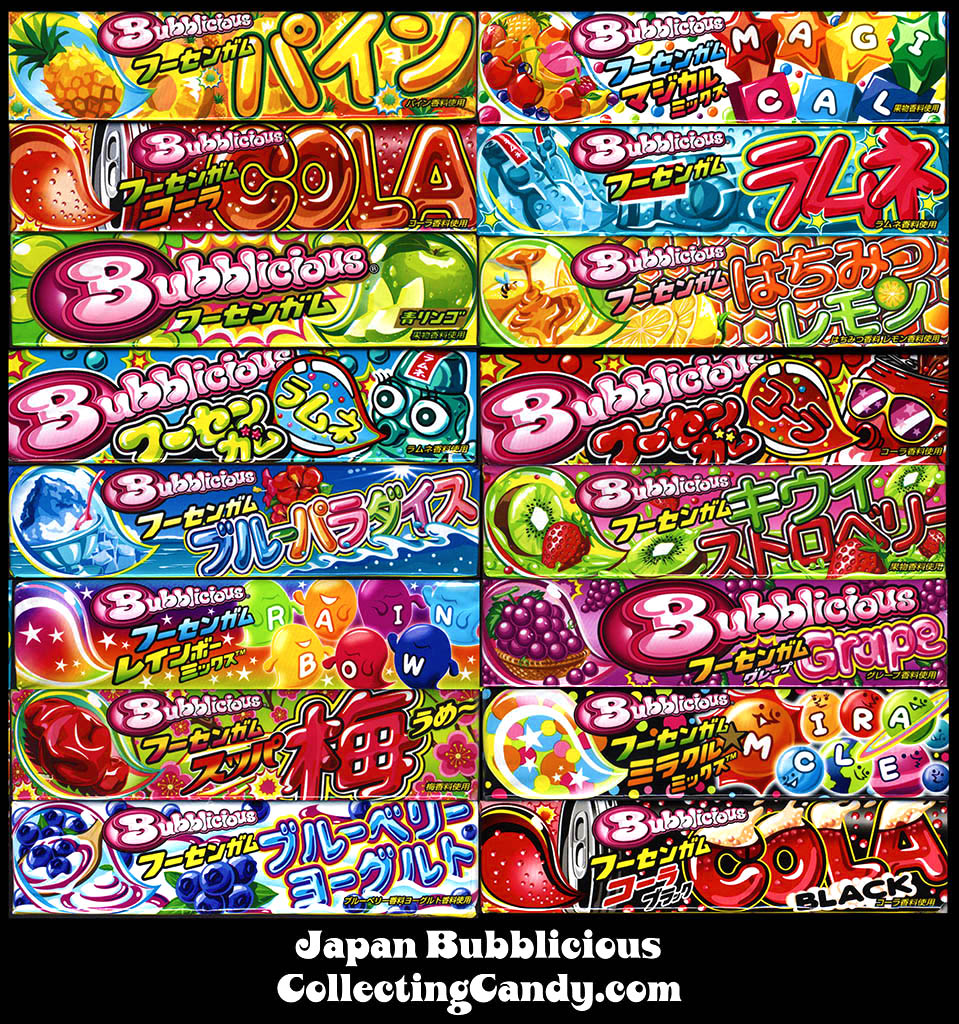 All of my Japanese Bubblicious packs together!

Aren’t they a fun explosion of color and design?  I think they’re fantastic.

And that’s everything for today’s post on Bubblicious from Japan.  See you next time!

A New York City based writer, editor and sometimes actor. After spending much of the 1990′s in the comic book business helping tell the stories of Marvel Comics’ X-Men as series editor, he has since split his time between developing his own entertainment properties while still consulting and working on others. Having been described as “the Indiana Jones of lost and forgotten candy”, Jason is one of the country’s premier candy collectors and historians with his discoveries appearing in countless blogs, magazines, newspaper articles, and books. Always happy to share his knowledge and unique perspectives on this colorful part of our popular culture, Jason has consulted with New York’s Museum of Food and Drink and has also been a featured guest on Food Network’s Heavyweights, France’s M6 Capital, and New York’s TheActionRoom.com. My Google Profile+
View all posts by Jason Liebig →
This entry was posted in Bubble Gum, Japanese and tagged bubble gum, bubblegum, Bubblicious, candy collecting, candy collection, candy collector, candy wrapper collection, candy wrapper collector, collectible, collecting candy, confectionery, confections, gum, Japan, Japanese, packaging, soft-chunk, sweets, vintage candy wrapper, wrapper. Bookmark the permalink.