The Unusual Flavor Spinoffs of Rolo!

Like most major candy brands, Rolo is a mainstay that has occasionally been the recipient of an oddball flavor spin-off.  I documented a pair of these kinds of Rolo wrappers last year, but since then I’ve come across a few others and today I’d like to share them with  you.

Last year I documented over 50 Rolo wrappers in my collection across three different articles.  Everything from the very first Rolo wrapper released in 1937, to the bulk of my collection of 30 wrappers spanning the last five decades in my Big Rolo Roundup post. 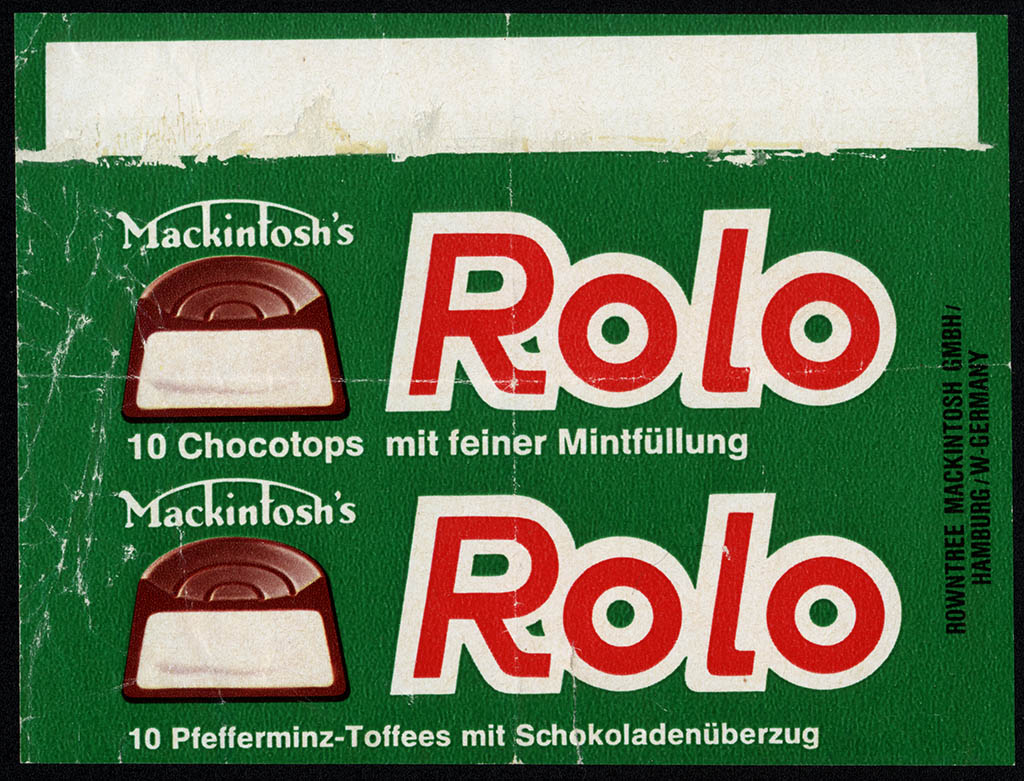 Of course that’s one I’ve already shared here on CollectingCandy.com, and today I want to focus on my new discoveries.

First up are the wrappers for a pair of white chocolate-based Rolo treats, both coming from the UK: 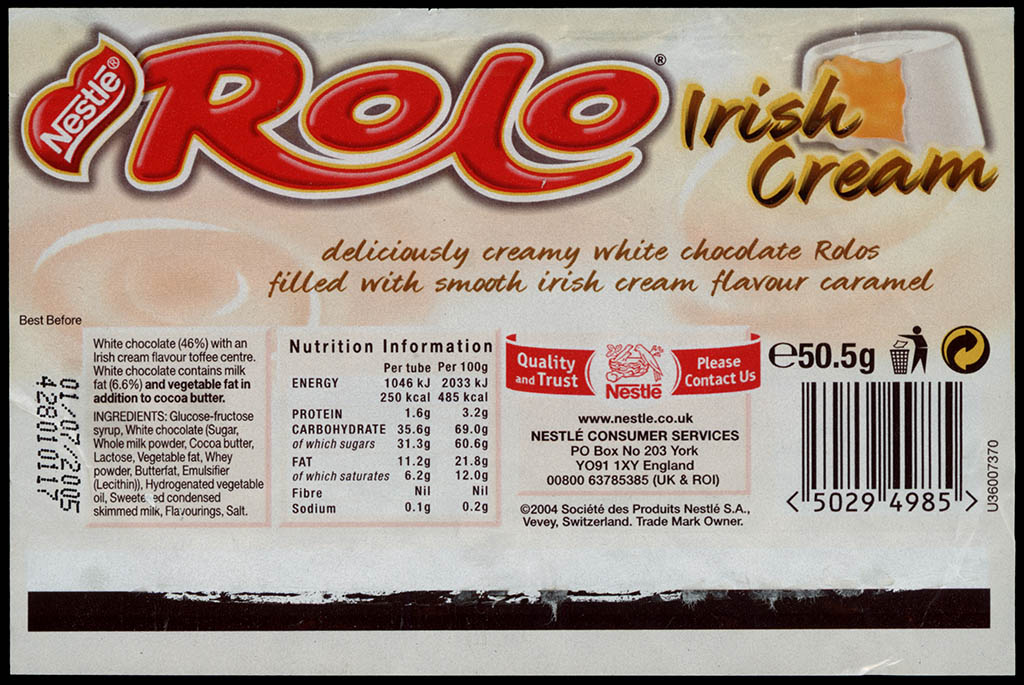 The white chocolate base for these Rolos has me wishing I could have tried them back when they were on sale.  Since they were exclusive to the UK, I never saw them.

Another interesting Rolo flavor offering from Nestle UK came in the form of a Treacle Toffee edition (Treacle is a kind of British Molasses): 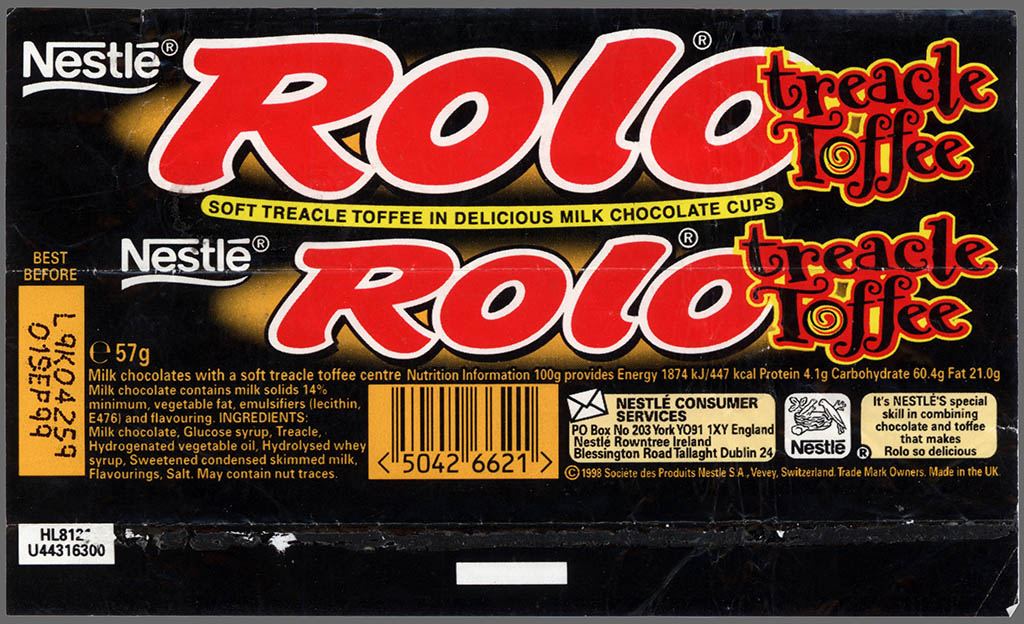 That wrapper is quite similar to a South African “Licorice Toffee” version I wrote about last year:

Finally, here’s a striking blue wrapper for the limited edition Rolo Coconut, released in the United Kingdom back in 2001: 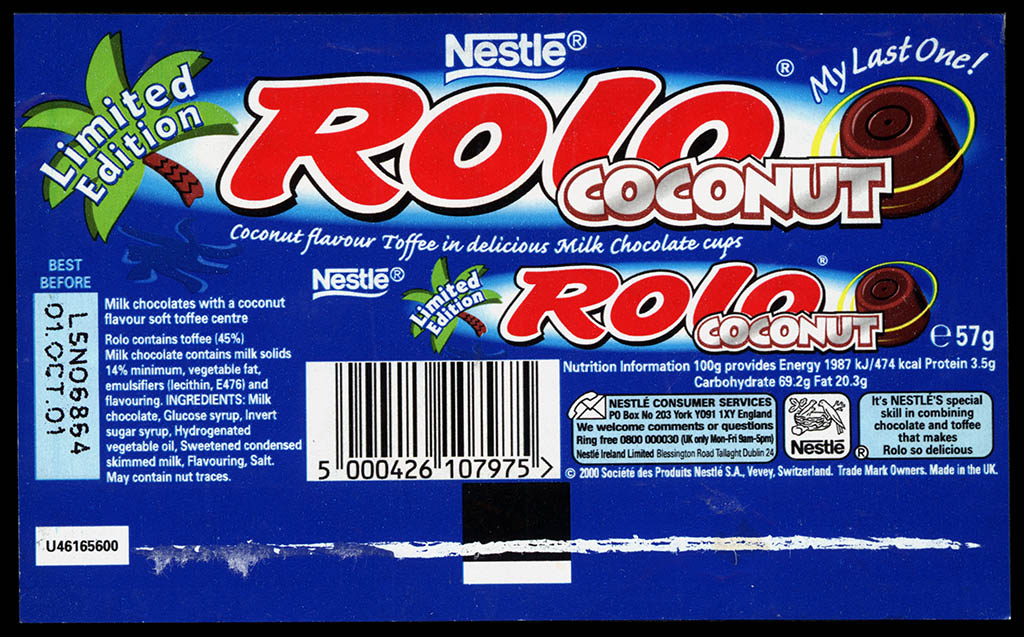 That makes up the new-and-unusual flavor spinoffs of Rolo I have to show you.  But since I am on the topic, I thought I’d also share a few other less-exotic Rolo wrappers I’ve added to my collection since I last covered the brand.

The next wrapper appears to be a time when Rolo was reverting back to its “original style”: 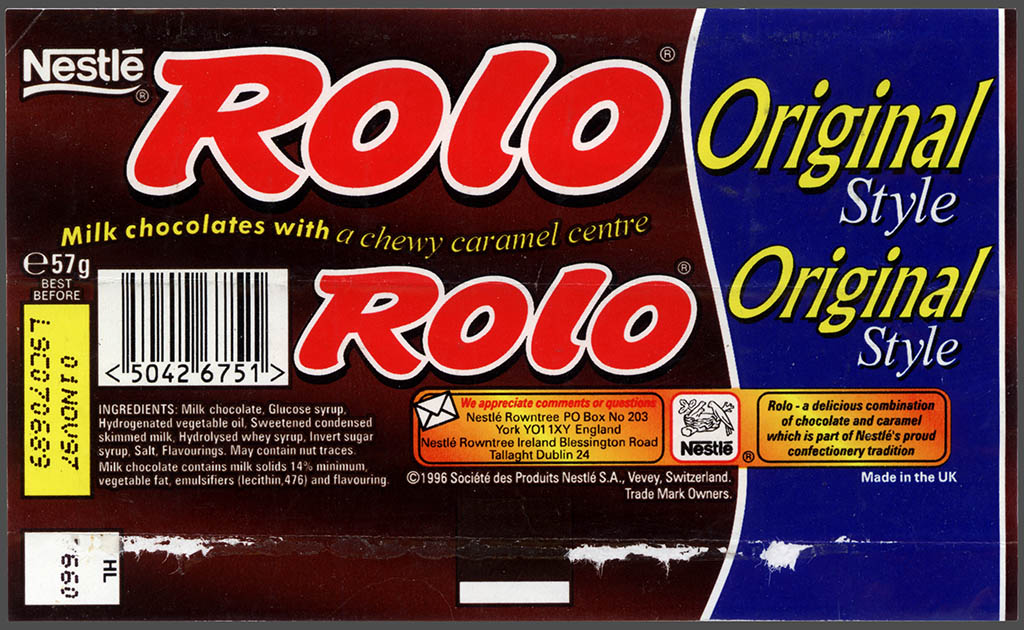 Here’s one where the brand was getting a “wickedly smoother chocolate”.  Note the slogan directly underneath the logo, “a handful of mischief”.   Awesome! 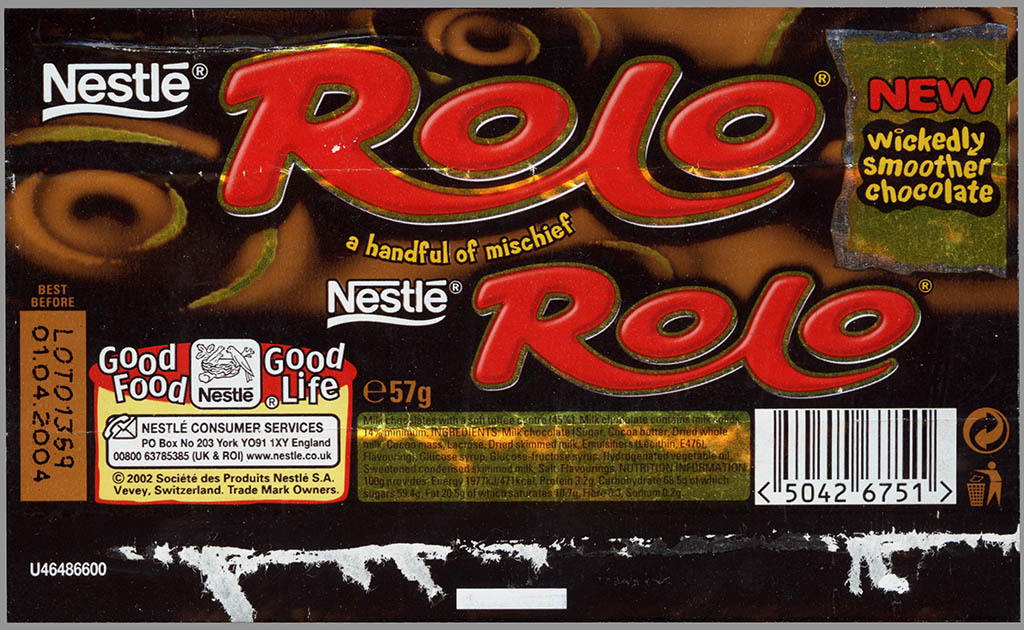 And the Jumbo Rolo offering you can only find in Canada: 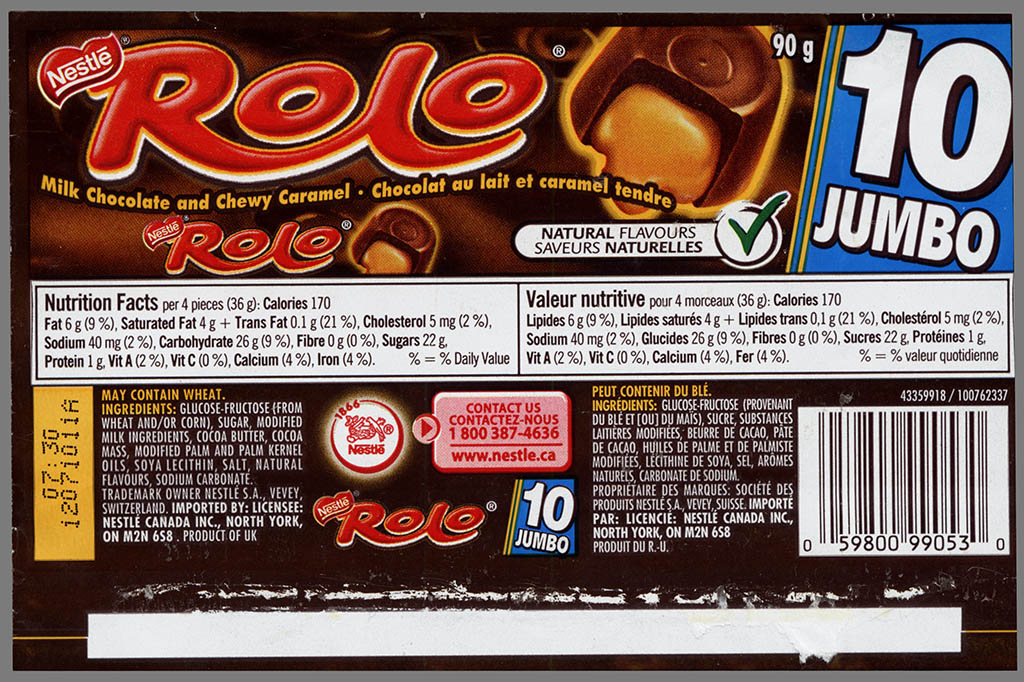 Finally, I picked up another variation of Rolo Cookies recently: 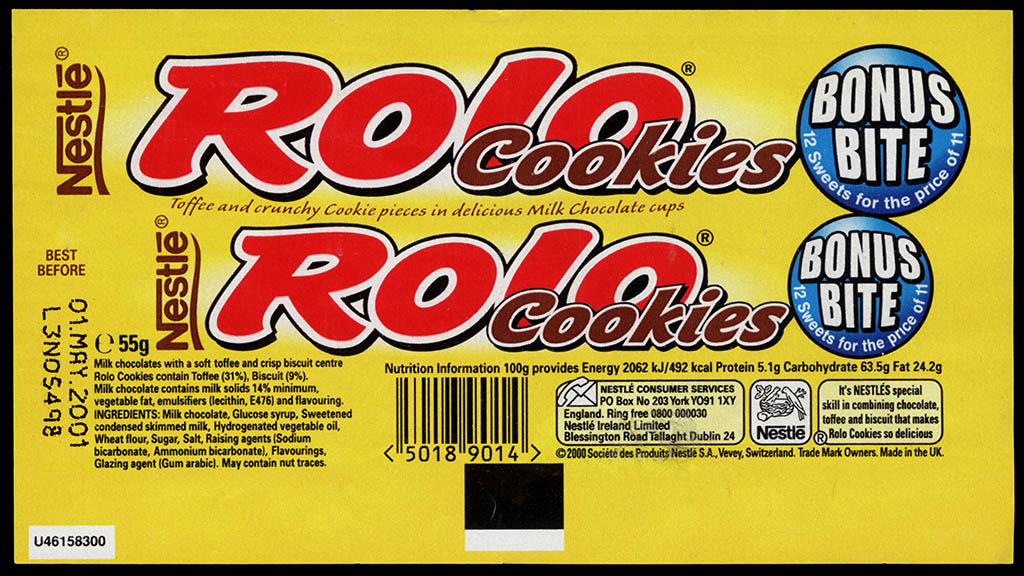 That Rolo Cookies is a neat wrapper (and a delicious-sounding item), but the one I previously shared last year is a bit cooler as it shows a cutaway of the confectionery combination itself:

Oddball flavor spinoffs of standard brands are one of my favorite areas of candy packaging to collect, so these are all quite a lot of fun for me.  I hope you’ve enjoyed seeing them brought together as much as I have.

And that’s everything for today’s coverage of the unusual flavor spinoffs of Rolo.

A New York City based writer, editor and sometimes actor. After spending much of the 1990′s in the comic book business helping tell the stories of Marvel Comics’ X-Men as series editor, he has since split his time between developing his own entertainment properties while still consulting and working on others. Having been described as “the Indiana Jones of lost and forgotten candy”, Jason is one of the country’s premier candy collectors and historians with his discoveries appearing in countless blogs, magazines, newspaper articles, and books. Always happy to share his knowledge and unique perspectives on this colorful part of our popular culture, Jason has consulted with New York’s Museum of Food and Drink and has also been a featured guest on Food Network’s Heavyweights, France’s M6 Capital, and New York’s TheActionRoom.com. My Google Profile+
View all posts by Jason Liebig →
This entry was posted in British, Chocolate, Nestle and tagged British, candy collecting, candy collection, candy collector, candy wrapper collection, candy wrapper collector, collectible, collecting candy, confectionery, confections, Nestle, oddball flavor spinoff, packaging, Rolo, sweets, United Kingdom, vintage candy wrapper, wrapper. Bookmark the permalink.

16 Responses to The Unusual Flavor Spinoffs of Rolo!