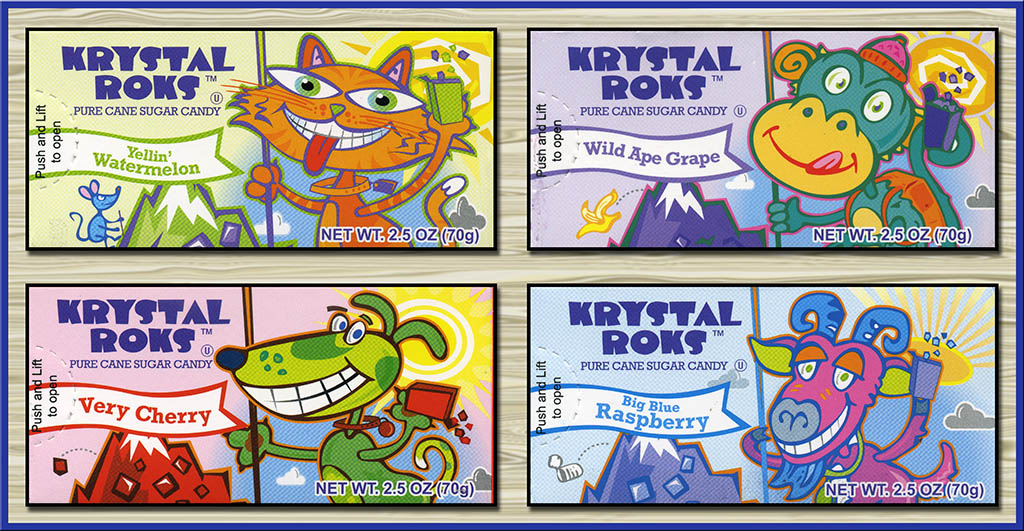 While traveling in 2009, I found myself in the candy section of an airport shop when I spotted a box of Wild Ape Grape flavor Krystal Roks.  I’d never come across Krystal Roks before, so I grabbed up the wonderfully-illustrated box and went on my way.  Several months later I was fortunate to find the other three flavors of Krystal Roks at a retro candy store and today I’d like showcase this neat, four-box set.

Krystal Roks were a flavored rock candy product distributed by Dryden & Palmer, a company known for their rock candy confections for over a century.   While the simplicity of rock candy might make it seem rather old-fashioned, Krystal Roks was a wonderful attempt to give the confection a colorful contemporary edge.

To their credit, I found the flavors to be very “of-the-now” and the packaging immediately attention-getting.  Here are the four different flavor boxes of Krystal Roks: 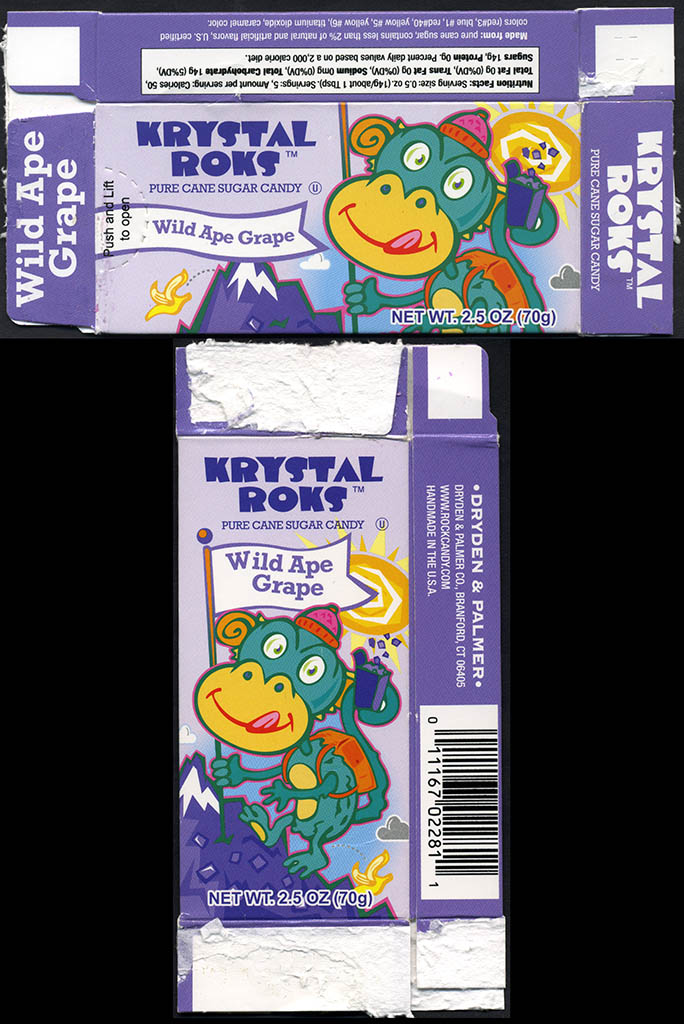 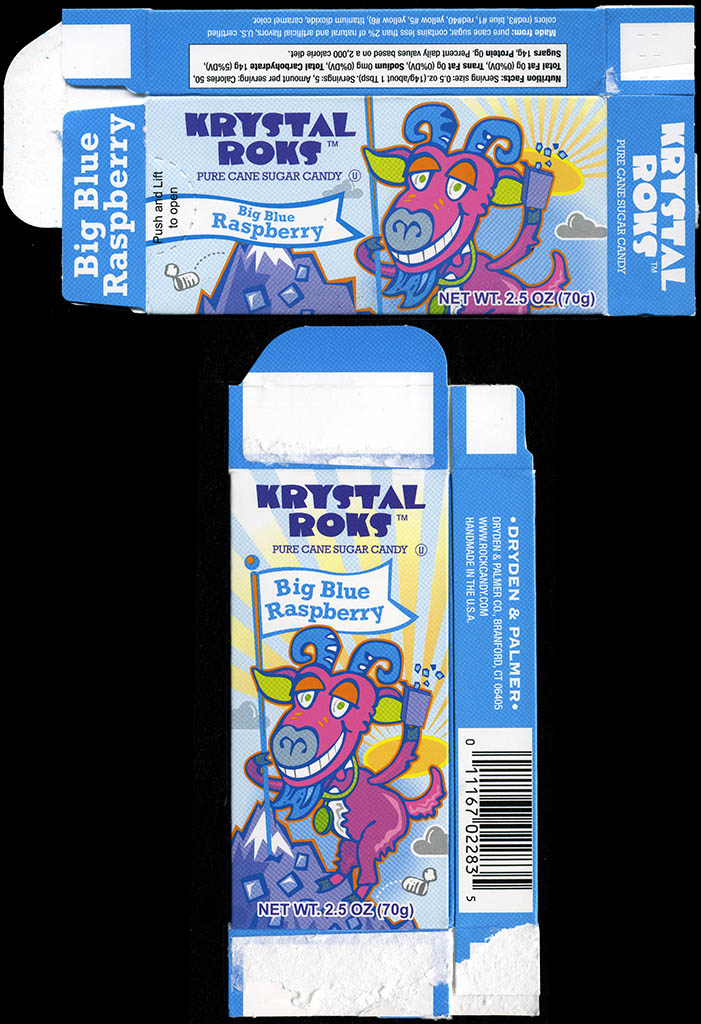 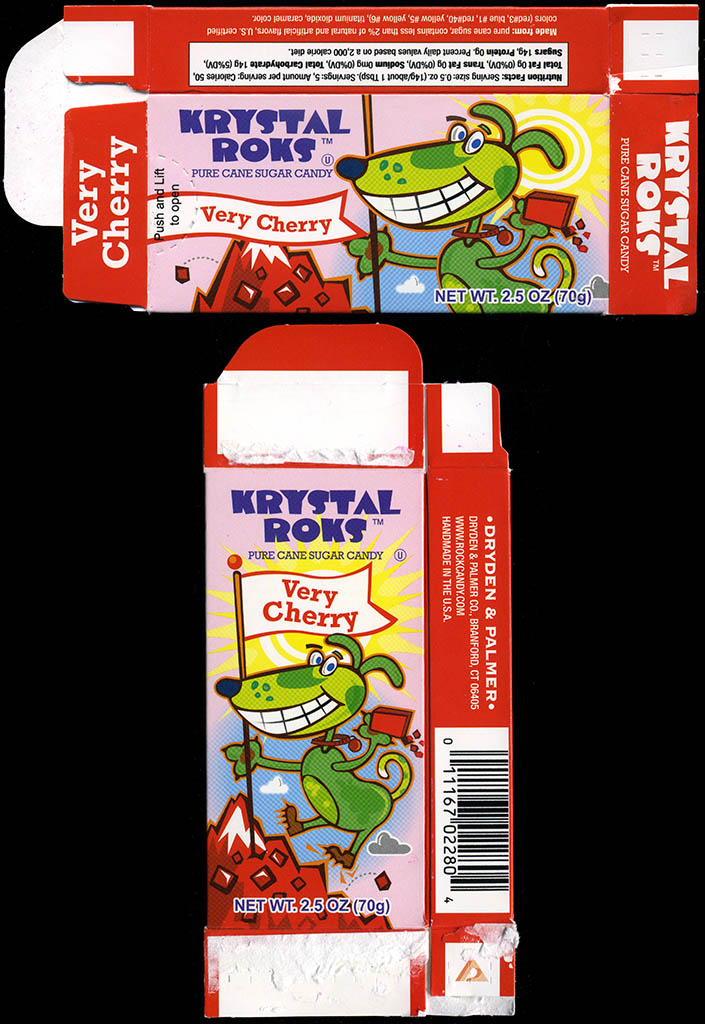 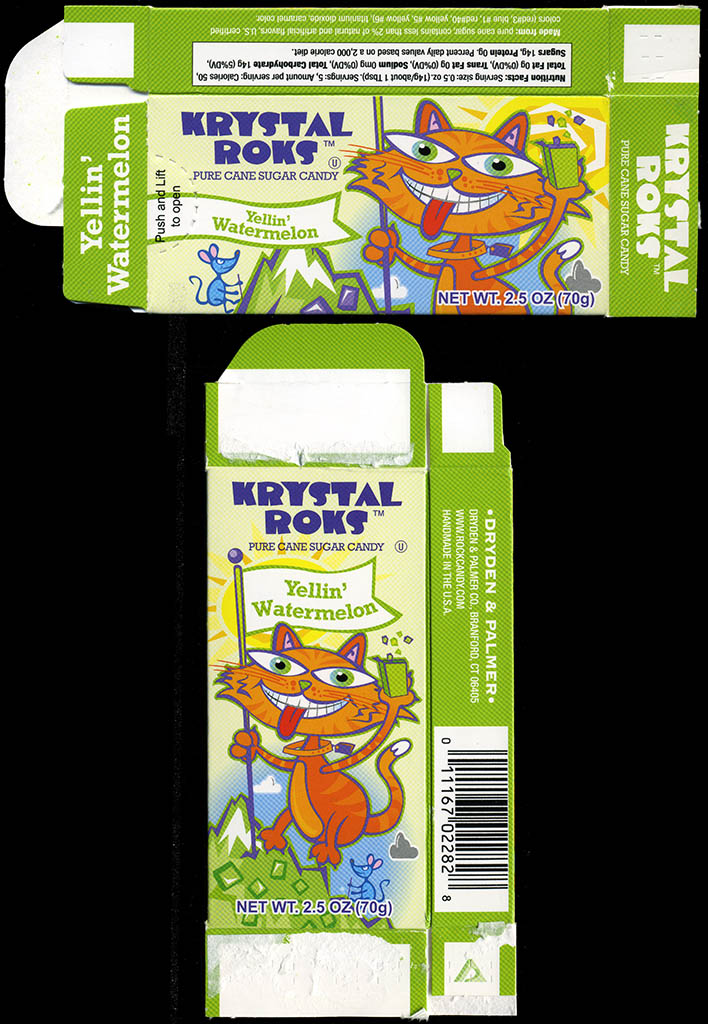 Those are the only four flavors of Krystal Roks I ever encountered and I’m fairly certain those are the only ones produced.  Sadly, it does not appear that these were available long after I came across them back in 2009.  I’ve not seen them in any of my candy travels since and they are not listed as a current product at the D&P webstore.

I have since picked up one of Dryden & Palmer’s more classic rock candy offerings, and it came in a decidedly more old-fashioned, yet-still-classy box. [Note the history of D&P on the side panel.]  Here it is: 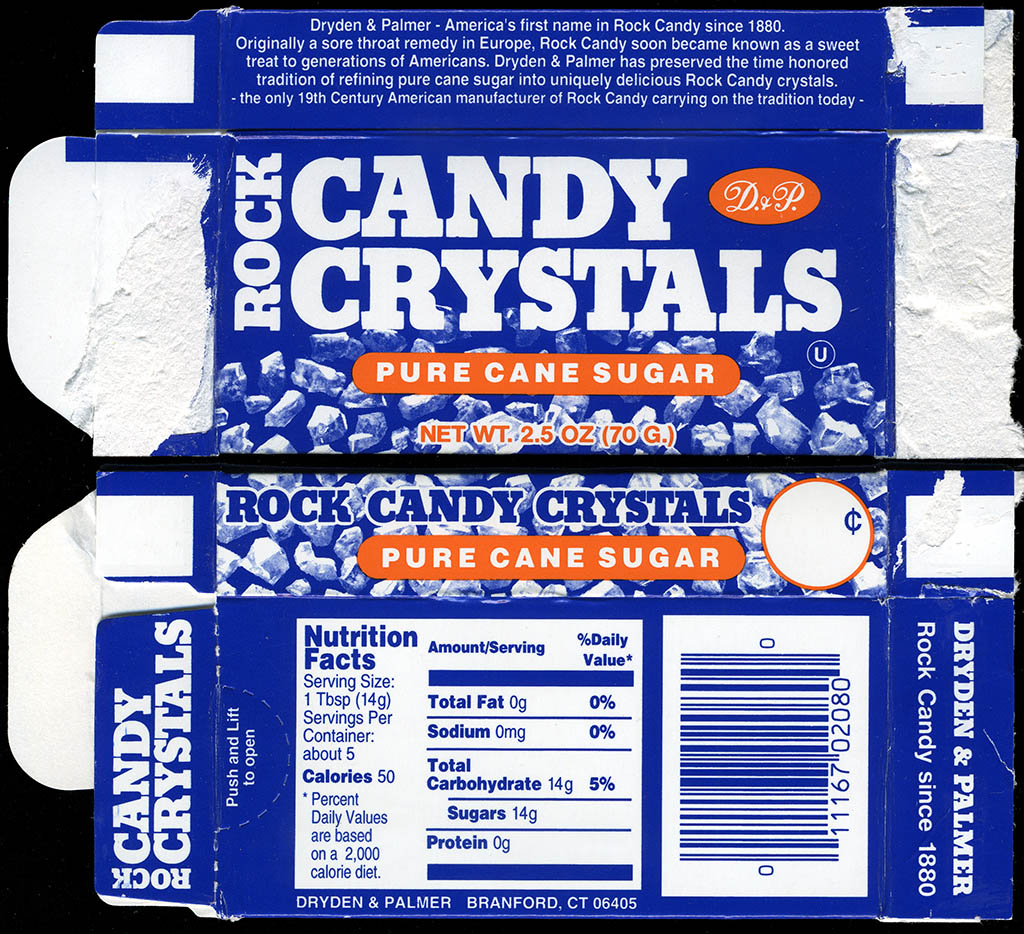 When I found that box, I was reminded that I do have a vintage D&P rock candy box from the 1950’s or 1960’s somewhere in my collection.  I searched my files for it so that it could be included in today’s post, but I came up empty.  When I do come across it again, I’ll be sure to share it here.

And that’s everything for today’s coverage of Dryden & Palmer’s delightful Krystal Roks.

A New York City based writer, editor and sometimes actor. After spending much of the 1990′s in the comic book business helping tell the stories of Marvel Comics’ X-Men as series editor, he has since split his time between developing his own entertainment properties while still consulting and working on others. Having been described as “the Indiana Jones of lost and forgotten candy”, Jason is one of the country’s premier candy collectors and historians with his discoveries appearing in countless blogs, magazines, newspaper articles, and books. Always happy to share his knowledge and unique perspectives on this colorful part of our popular culture, Jason has consulted with New York’s Museum of Food and Drink and has also been a featured guest on Food Network’s Heavyweights, France’s M6 Capital, and New York’s TheActionRoom.com. My Google Profile+
View all posts by Jason Liebig →
This entry was posted in Boxed, Hard Candy and tagged candy collecting, candy collection, candy collector, candy wrapper collection, candy wrapper collector, collectible, collecting candy, confectionery, confections, contemporary, D&P, Dryden & Palmer, flavored, mascot, packaging, rock candy, sweets, vintage candy wrapper, wrapper. Bookmark the permalink.