Bart Simpson Back on Butterfinger! A “90ish” Anniversary Teaser!

I’m excited to break the news that later this year, Bart Simpson will once again be gracing the wrappers of Butterfinger bars!   Read all about it and see all three brand new wrapper designs up-close after the jump!

Yes it’s true!  In celebration of Butterfinger’s 90ish Anniversary later this year, Bart Simpson has been brought back to help promote his crispety, crunchety, peanut buttery favorite candy bar.  [Note: It’s 90″ish” rather than 90″th” because even the folks at Nestle couldn’t determine precisely which year that first Butterfinger bars were first sold.   But all evidence points to it being on or around 1923.] 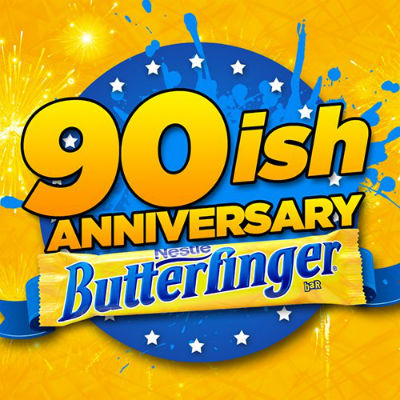 It’s been well over a decade since we last saw any of The Simpsons clan on Butterfinger packaging, but for the better part of the 1990’s the two were inexorably connected.   Just last year I wrote about Nestle’s long affair with The Simpsons and the various wrapper promotions it spawned.

So with such a rich history and long-standing association, the return of Bart Simpson to Butterfinger for the 90ish Anniversary comes as pretty exciting news.   I’d been suspecting we’d be seeing some kind of anniversary announcement soon, as the Butterfinger Facebook page has been doing their own look back at the brand’s history these past few weeks.  But yesterday it became official – this year is to be Butterfinger’s 90ish Anniversary celebration, with Bart back on board!

I don’t believe these Bart Simpson wrapper designs have been shown over at the Butterfinger Facebook page just yet, or anywhere else for that matter – so today’s unveiling of them here on CollectingCandy.com might be a world premiere.  With that in mind, I guess it’s time to show them – because they’re very cool:

This first example will probably end up being most people’s favorite of the bunch – it certainly is mine:

Looking at it now, it seems so obvious that the top of Bart’s head should be incorporated into the jagged cut edge of a Butterfinger wrapper.  This one really hits it out of the park in terms of fun and clever design.  In my opinion it’s an instant candy wrapper classic.

The next two wrapper designs are not quite as unique as the “Big Bart”, but they’re still pretty neat.  The following wrapper is what I would consider the most traditional of the trio revealed today:

And lastly, a similar design but with Bart’s fingers coming around from the back and wrapped around the bar, not-so-subtly hinting at the classic Bart Simpson commercial slogan, “Nobody better lay a finger on my Butterfinger bar!”:

Aren’t those spectacular?   It’s times like this that are especially fun for a candy collector, but I think everyone is going to enjoy these Butterfinger wrapper designs when they start landing on shelves later in the year.

And that’s everything for today’s teaser on the return of Bart Simpson for Butterfinger’s 90ish Anniversary.  When I learn more or start seeing these on shelves, I’ll be sure to share the news right here.

A New York City based writer, editor and sometimes actor. After spending much of the 1990′s in the comic book business helping tell the stories of Marvel Comics’ X-Men as series editor, he has since split his time between developing his own entertainment properties while still consulting and working on others. Having been described as “the Indiana Jones of lost and forgotten candy”, Jason is one of the country’s premier candy collectors and historians with his discoveries appearing in countless blogs, magazines, newspaper articles, and books. Always happy to share his knowledge and unique perspectives on this colorful part of our popular culture, Jason has consulted with New York’s Museum of Food and Drink and has also been a featured guest on Food Network’s Heavyweights, France’s M6 Capital, and New York’s TheActionRoom.com. My Google Profile+
View all posts by Jason Liebig →
This entry was posted in Chocolate, Nestle, Peanut Butter and tagged Bart Simpson, Butterfinger, candy collecting, candy collection, candy collector, candy wrapper collection, candy wrapper collector, collectible, collecting candy, confectionery, confections, licensed, Matt Groening, packaging, sweets, The Simpsons, vintage candy wrapper, wrapper. Bookmark the permalink.

2 Responses to Bart Simpson Back on Butterfinger! A “90ish” Anniversary Teaser!