To all of CollectingCandy.com’s readers that celebrate the holiday; Happy Easter!  It’s been fun counting down to today by sharing various Easter candy goodies and bits of confectionery history this week.

I wanted to close out the week’s Easter coverage with something extra-special.  With that in mind, today I’m taking a look back at the history of an Easter candy classic – Reese’s Peanut Butter Eggs.

Reese’s Peanut Butter Eggs were first test-marketed in 1966 in the state of Pennsylvania.  That test market was a huge success and the following year in 1967,  the rest of the nation would finally get their first taste of what would become a delicious Easter candy classic.  This trade magazine clipping documents that initial roll-out and features an image of the very first Reese’s Peanut Butter Eggs in their display box:

By the early 1970’s, Reese’s Peanut Butter Eggs would take on the single Easter-flower design that would become iconic to the brand.

Here’s an early display box lid, when the wrappers likely had a printed-on 10-cent price: 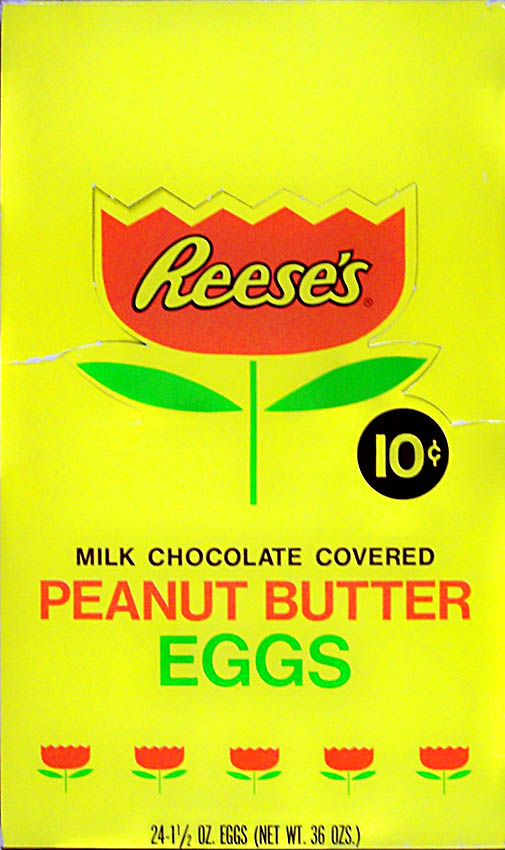 The earliest wrapper example I have in my collection is a partial or “trimmed” wrapper from a few years after that box lid: 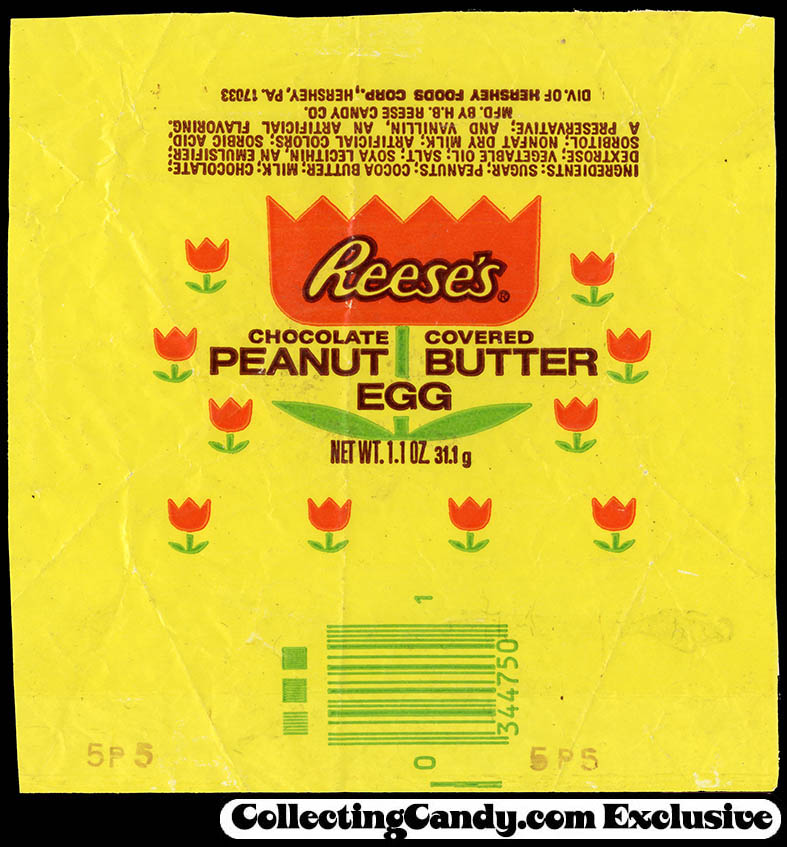 That classic design continued to be used for many years, likely into the 1990’s.  The next example I have to show is from the early 1980’s, and it is virtually unchanged from the mid-70’s version: 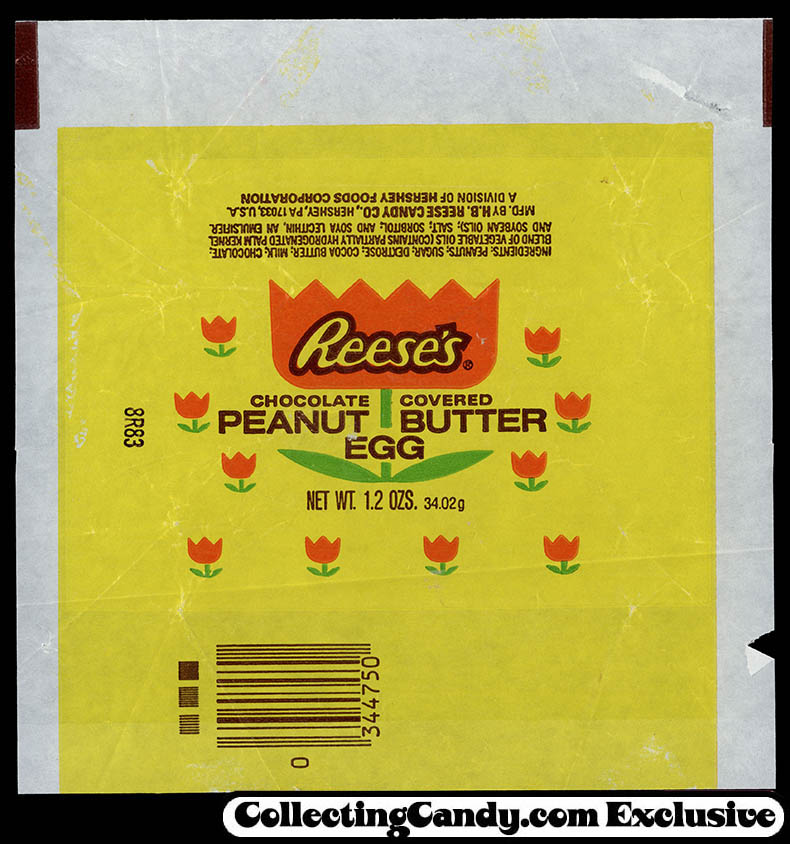 And in 1988, this wrapper design was still in use as you can see in this newspaper circular ad and coupon: 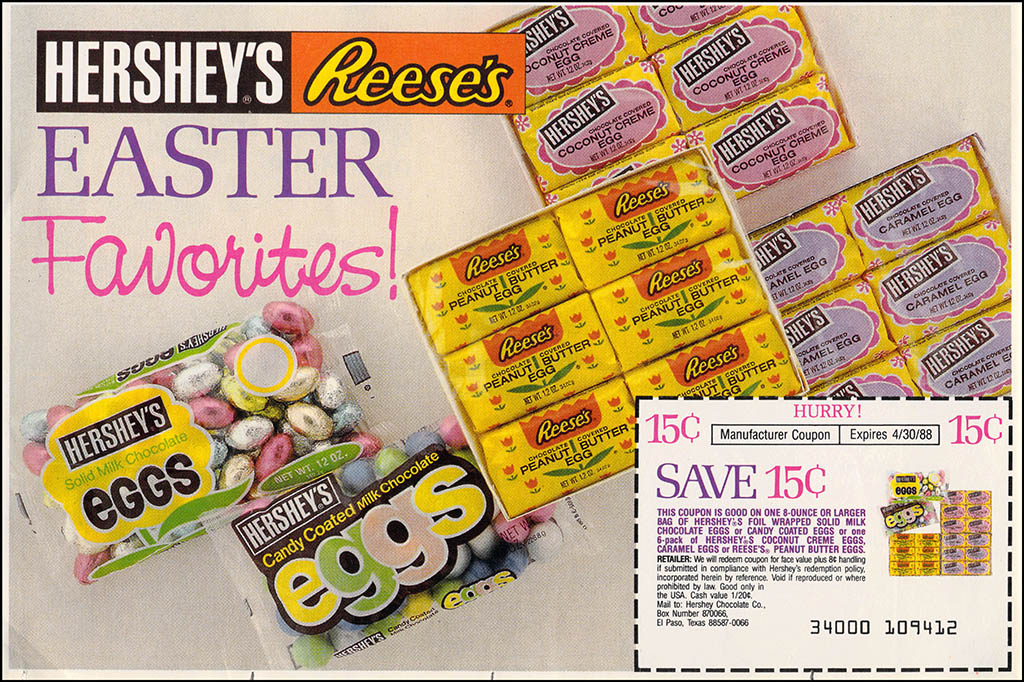 At this point I hit a significant gap in my research, as the next wrapper I have to show is from the early 2000’s.  This wrapper features an updated look and one which previews the design to follow: 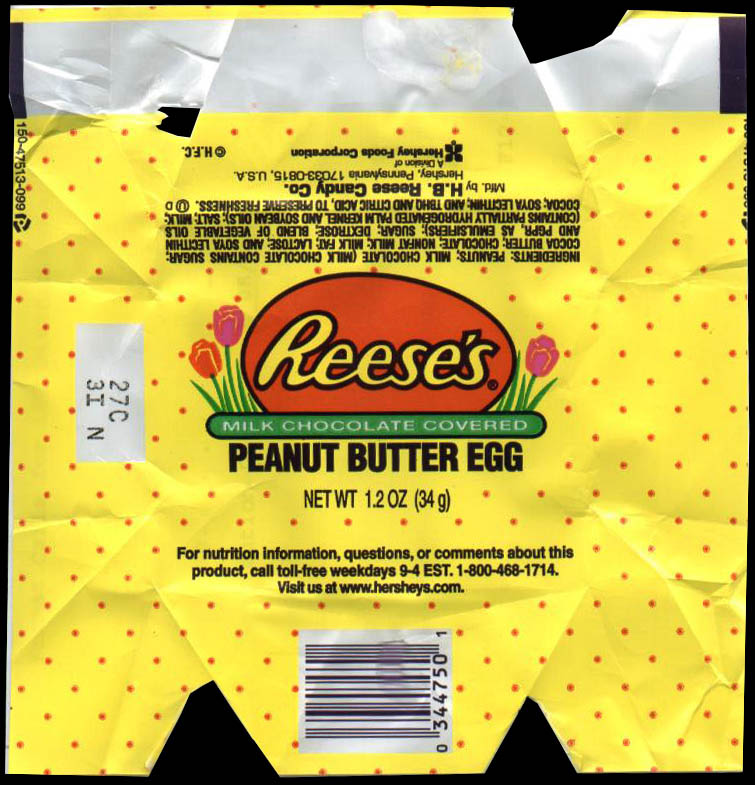 Just a couple years later, Reese’s Peanut Butter Eggs would have the look they largely retain to this day.  Though the design was introduced in 2004 or 2005, the earliest example I have is from 2009: 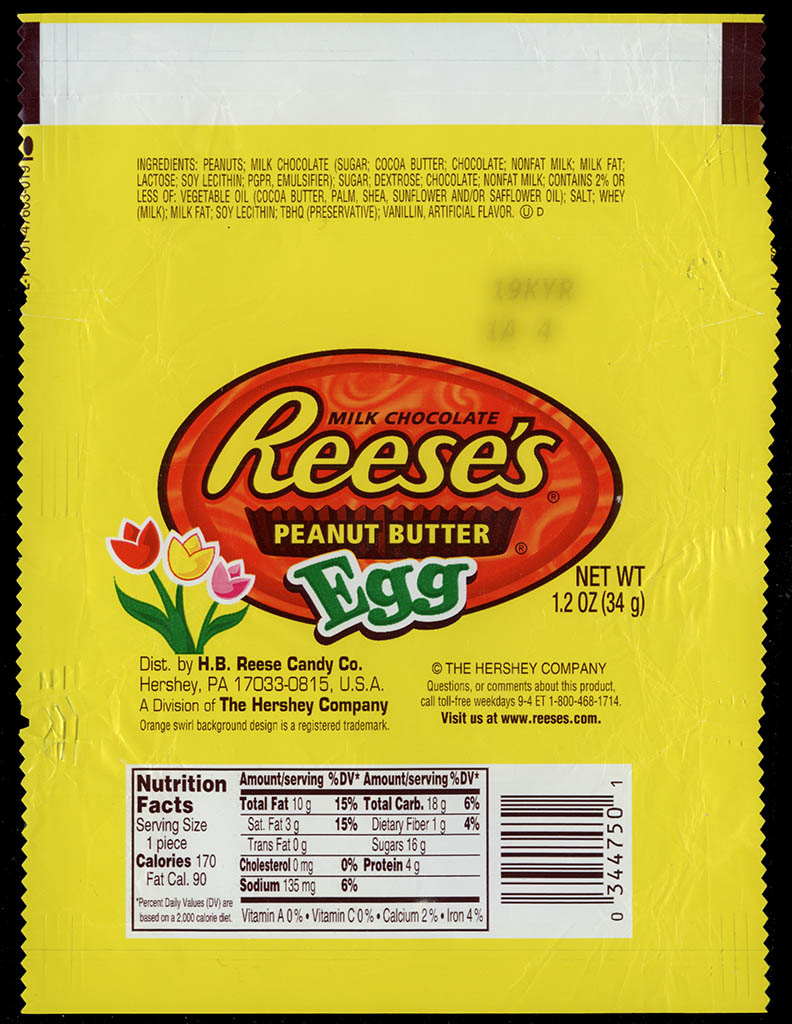 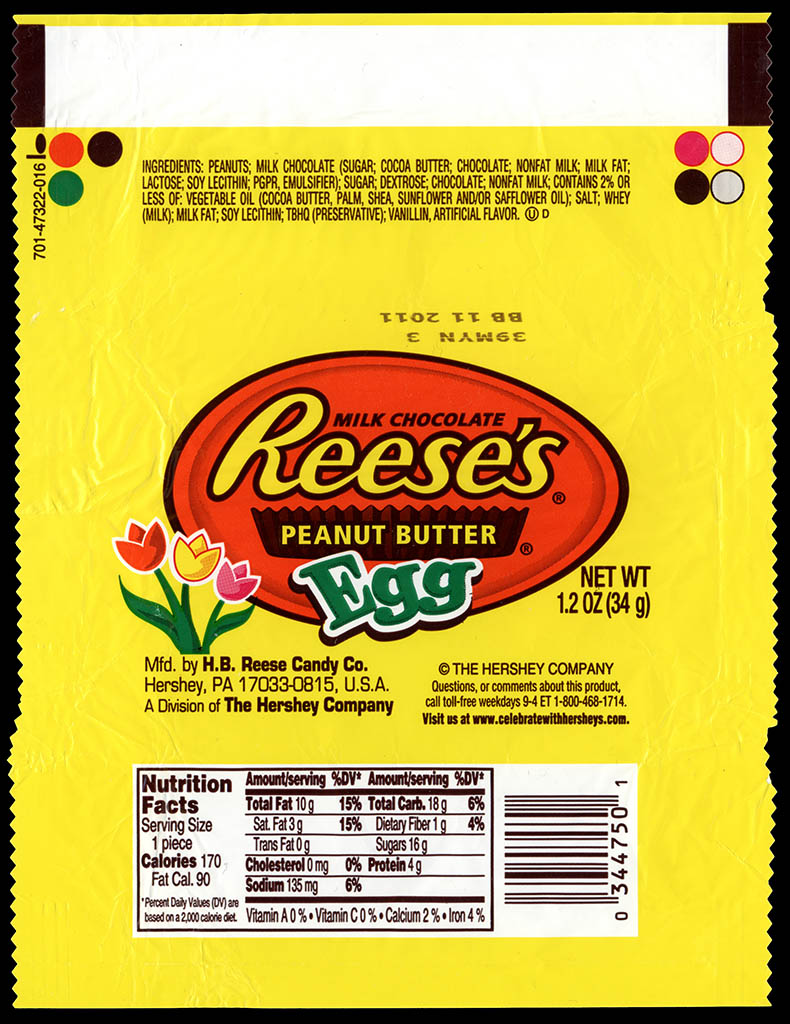 I’ve also got a recent Reese’s White Egg that shares this wrapper design: 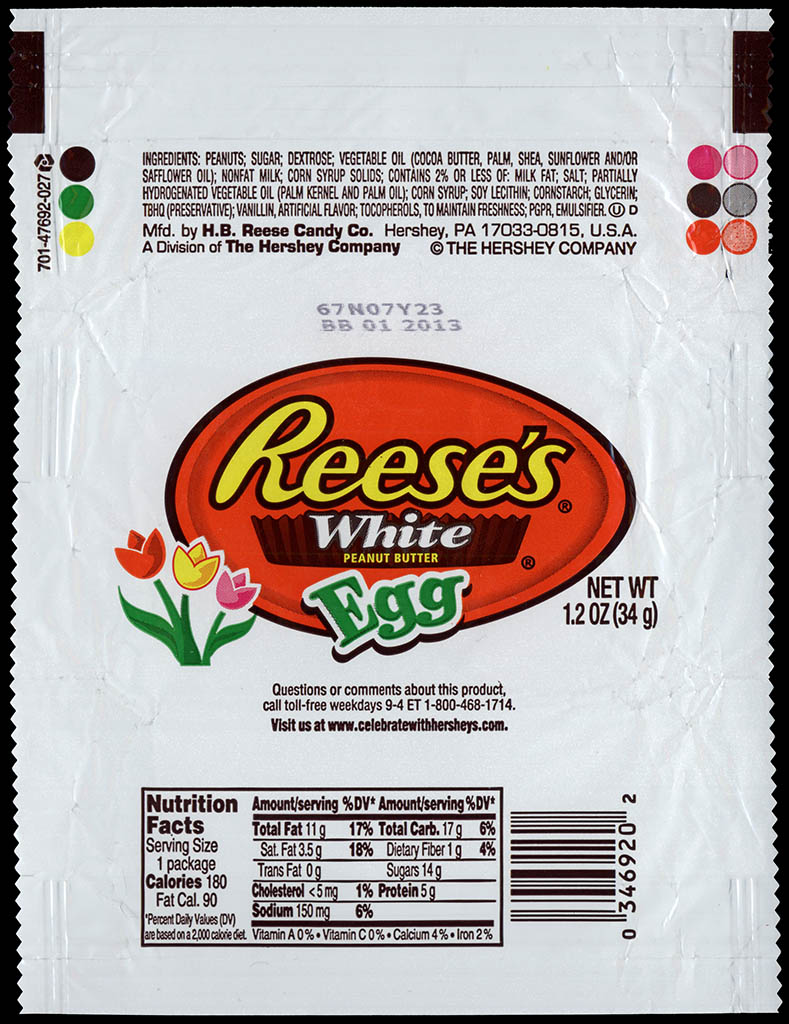 Since the modern design for Reese’s Peanut Butter Eggs arrived, there have been a number of special edition versions released beyond the white chocolate version I have.  I don’t have any of those others in my own collection, but I’d like to share a pair of examples pulled from elsewhere on the net.

First up, from the folks at CandyAddict.com is the Reese’s Fudge Egg:

And here is a neat-looking double-the-peanut-butter version from Jennifer T. on Flickr: 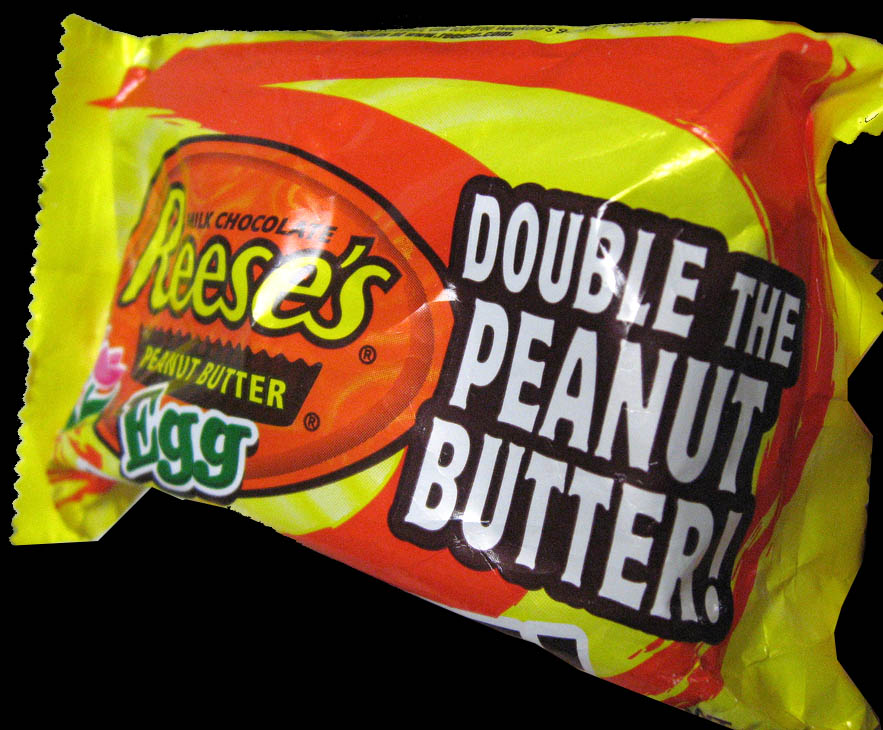 Back to items from my own collection, here is a six-pack outer pack for the standard Reese’s Peanut Butter Eggs: 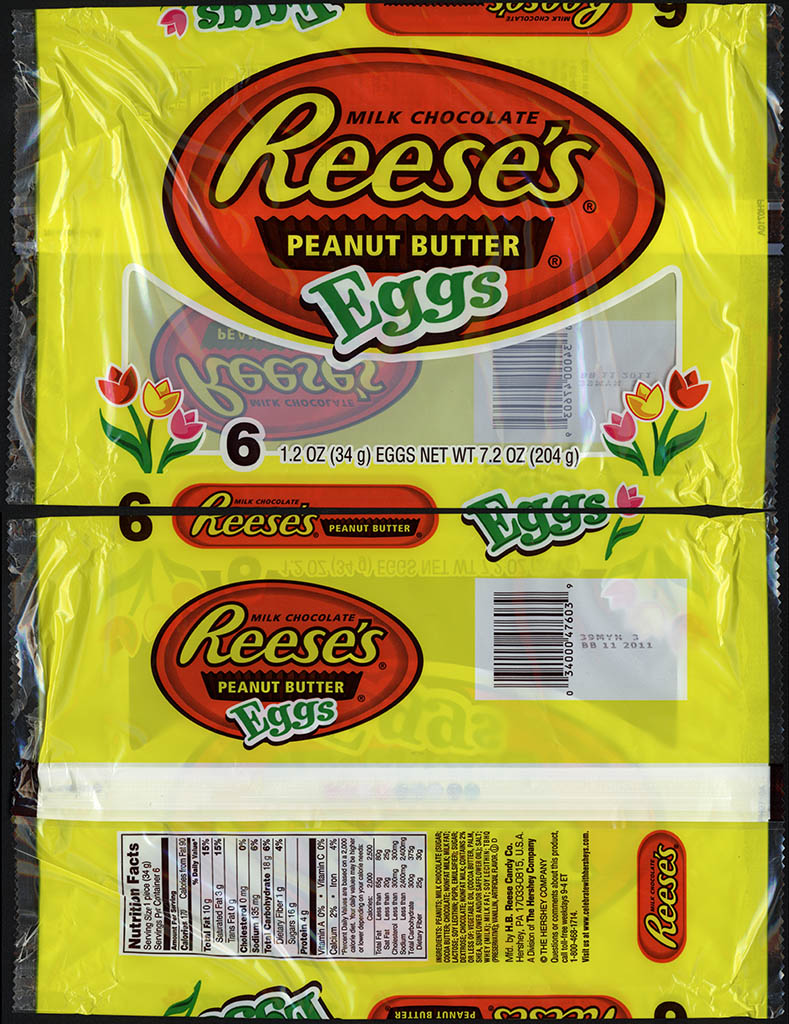 And a King-Size version of the standard: 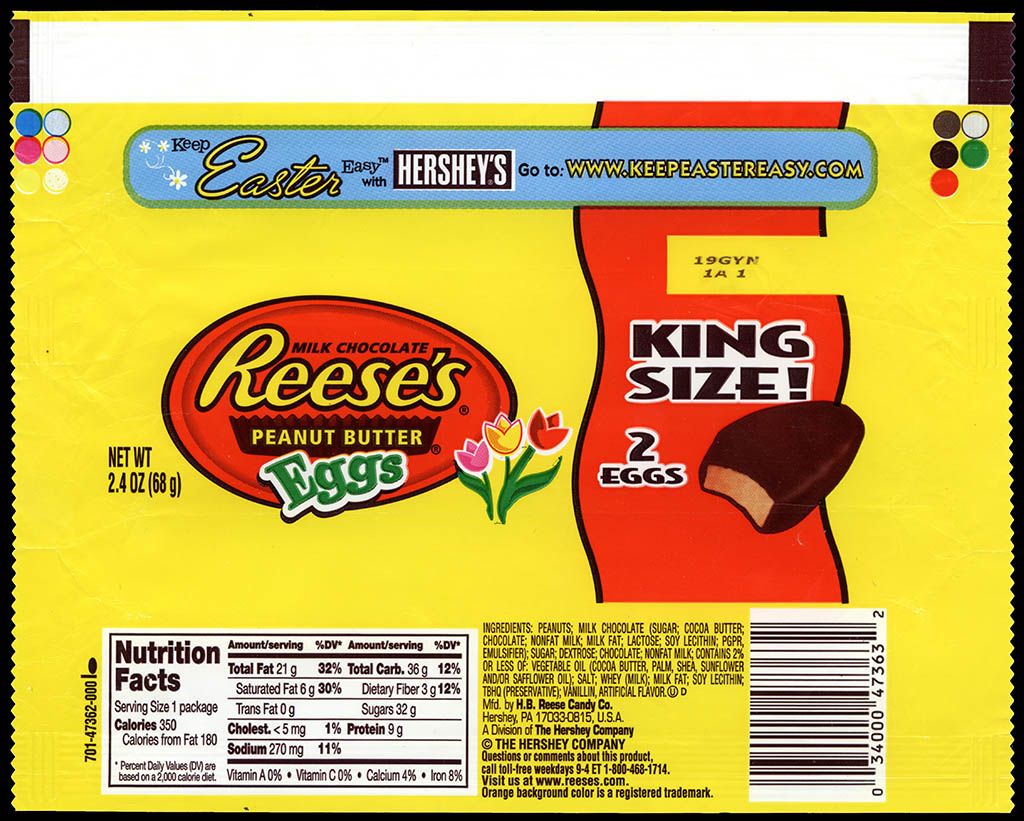 Moving on to the “fun-size” versions of Reese’s Peanut Butter Eggs – I’ve always quite liked these because they retain the spirit of the flower-design of the classic wrappers:

Here’s the outer package for the .6 ouncers: 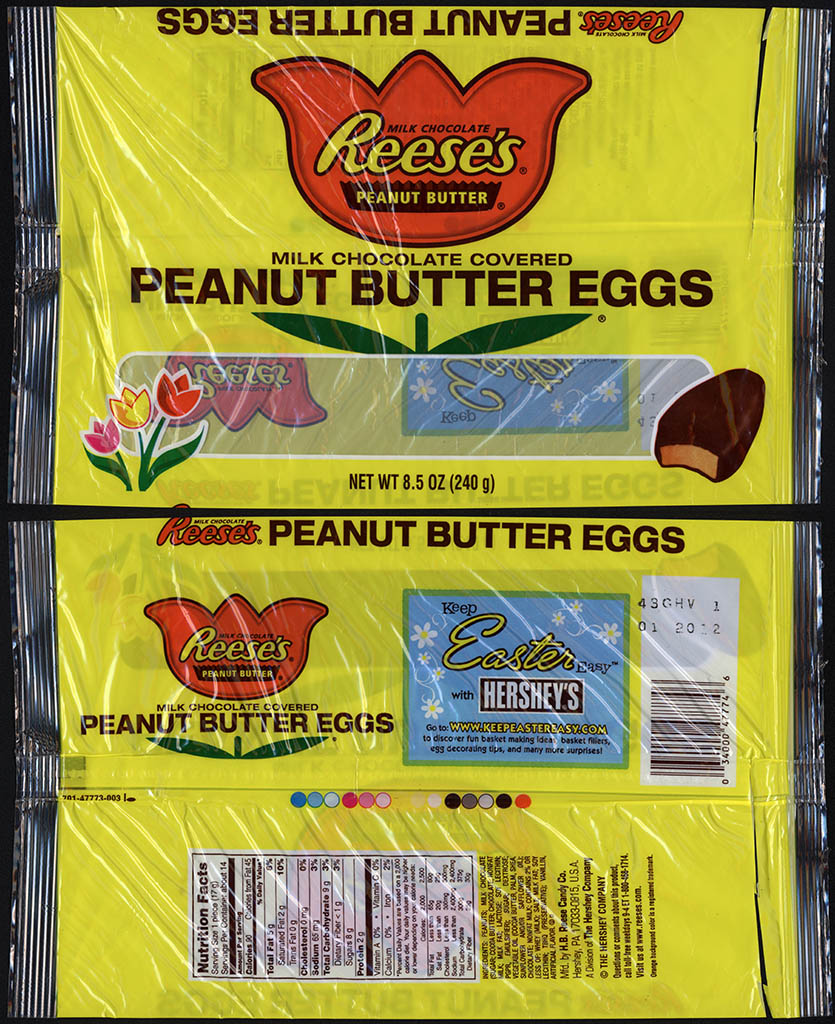 That brings us up-to-date on the classic Reese’s Peanut Butter Eggs.  It’s a rich and delicious history of Reese’s Easter goodness.

[Edit:  I know I have a modern version of the Canadian Reese’s Peanut Butter Egg wrapper in my collection, but I must have misfiled it as I couldn’t find it for today’s post.  When I do finally track it down, I’ll drop it in here.]

I do have a few other Reese’s Easter-related items that I wanted to share today.   First up, a foil-wrapper Reese’s Egg package: 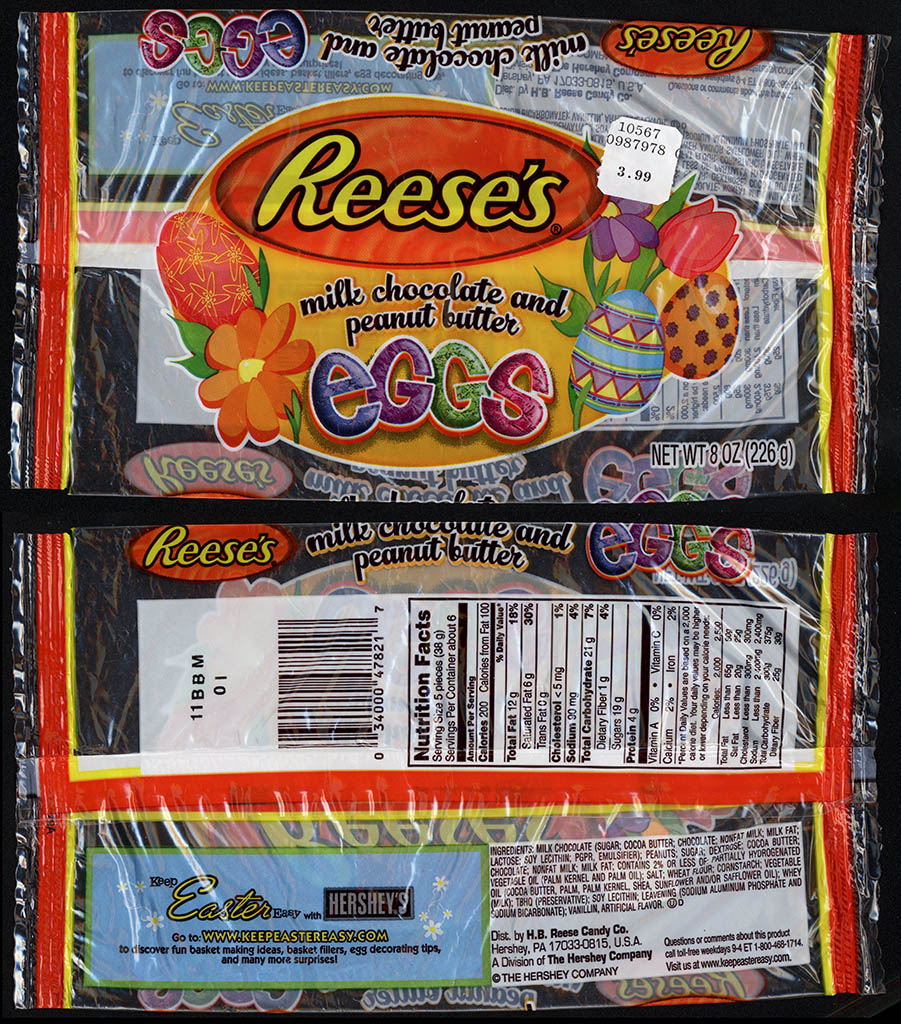 This is an Easter package for the Reese’s classic Miniatures: 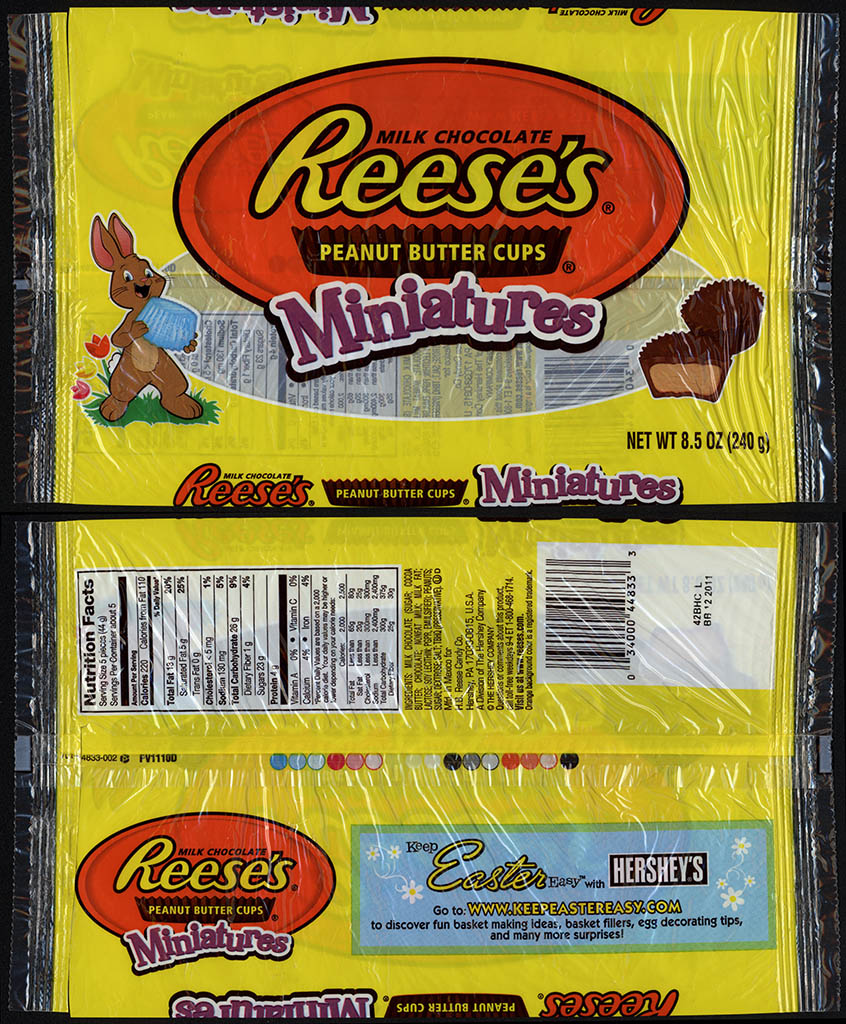 And here is an Easter-branded package for the relatively new Reese’s Peanut Butter Cup Minis: 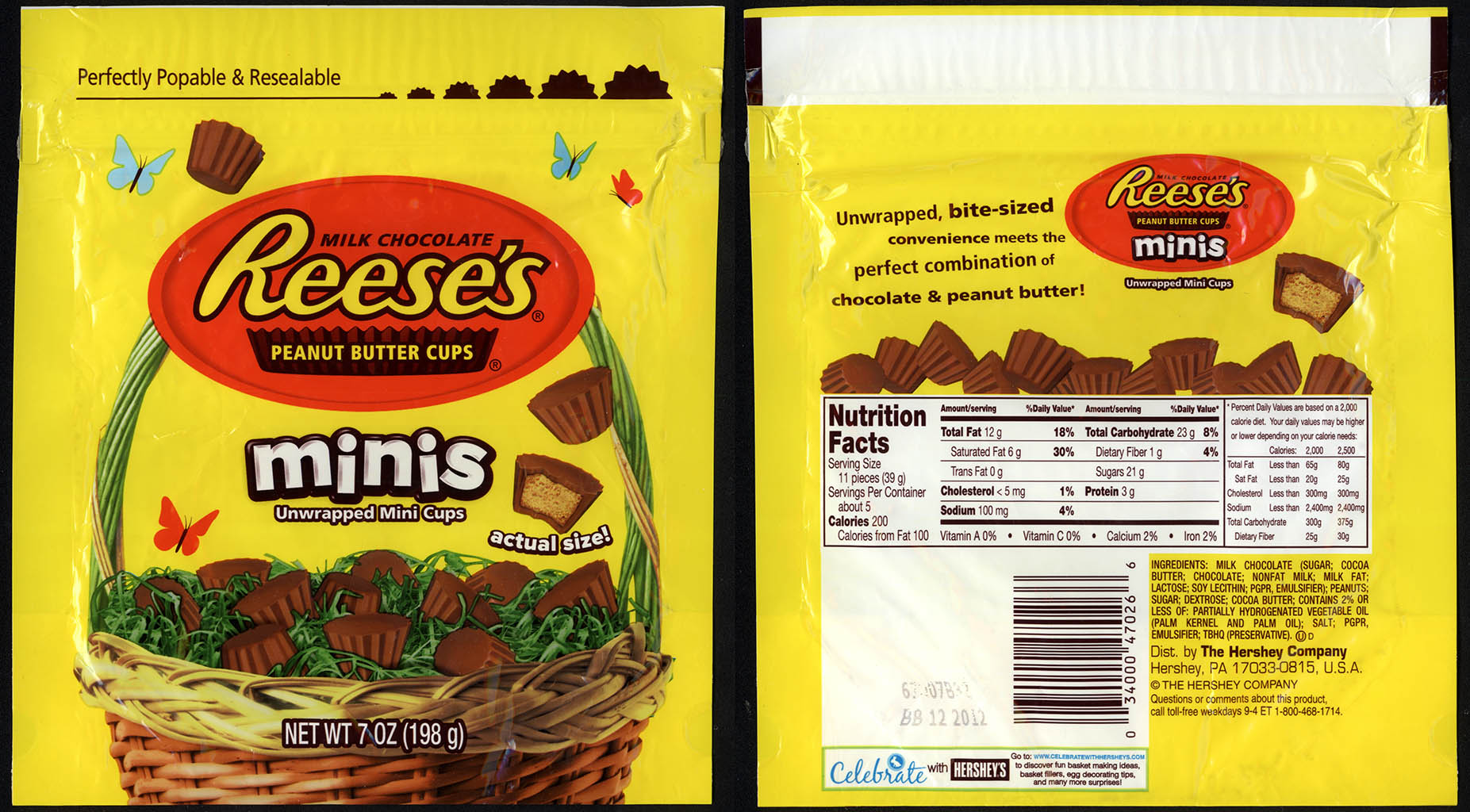 Finally, here is the cleverly-named Reester Bunnies.  The box for these is kind of plain, as the focus of the package design is to showcase the foil-wrapped, peanut-butter-filled chocolate bunnies: 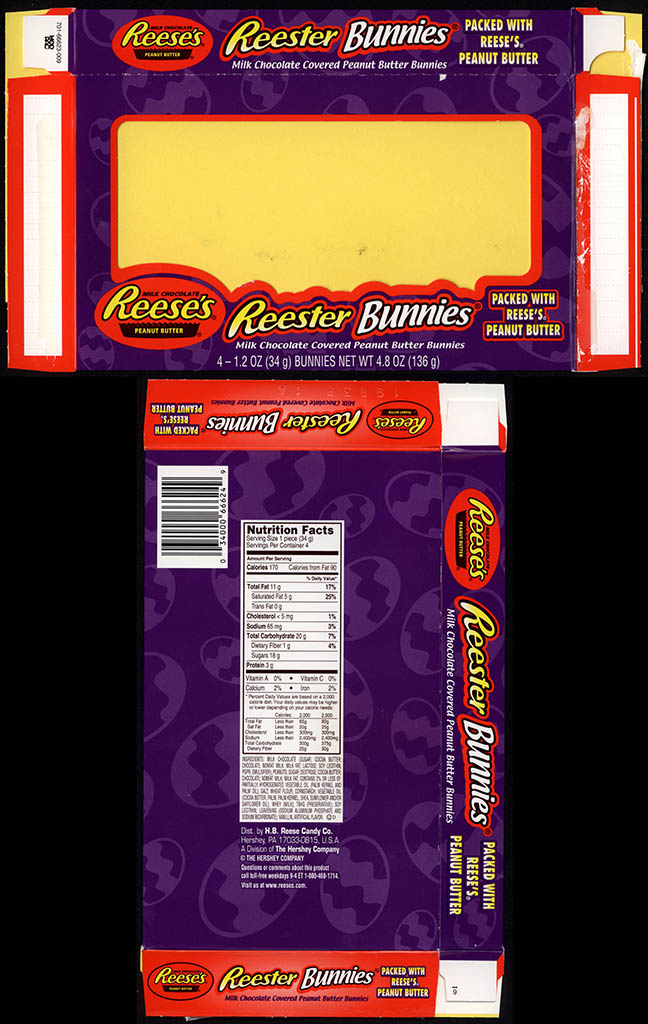 Here is one of the foil wraps. 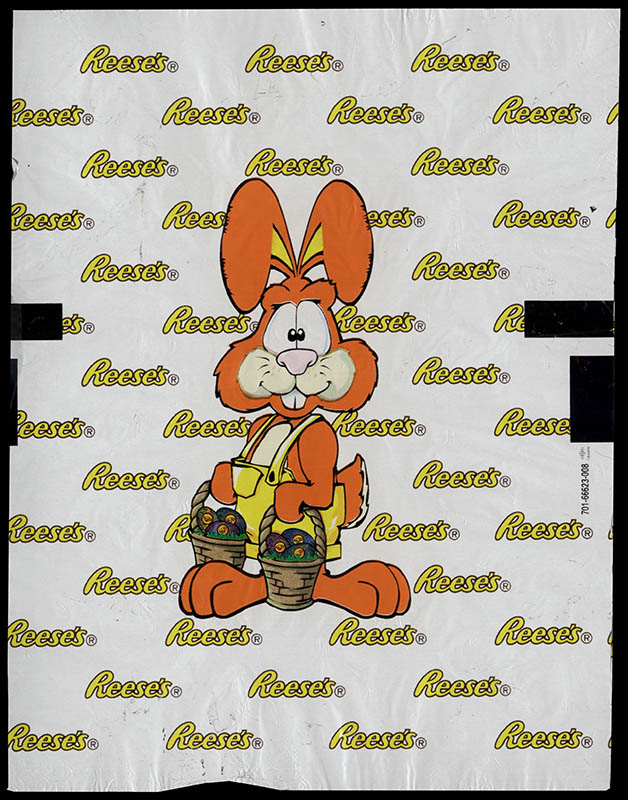 The Reester Bunnies received a packaging refresh and redesign for 2013.  I never saw the new version in any of my Easter candy hunts, but my brother sent me the following pic he snapped a couple of days ago: 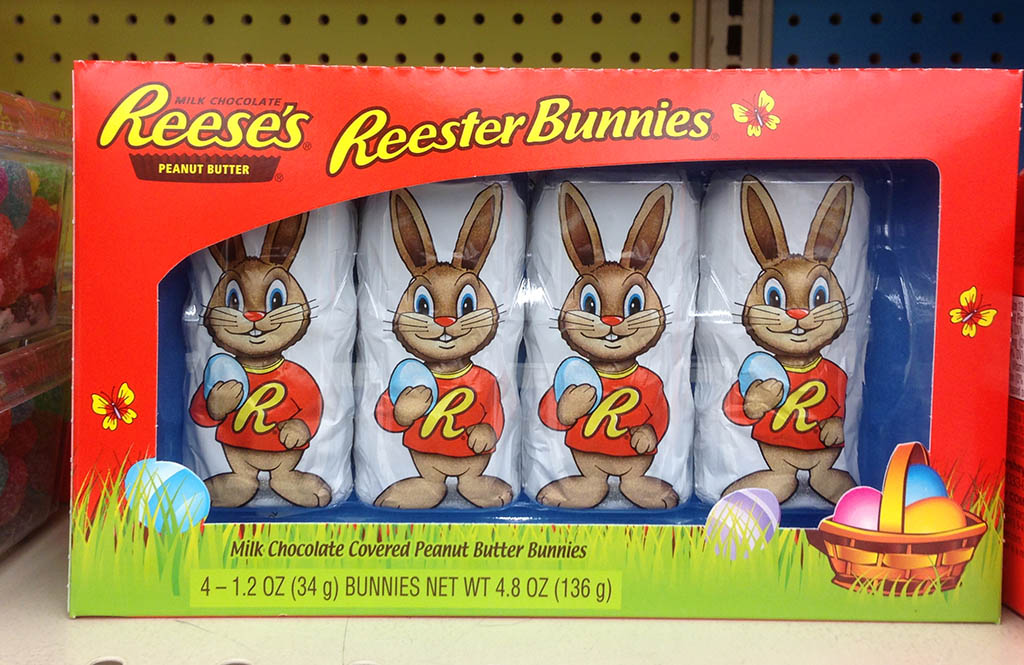 Eventually, I’d like to track down the wrapper designs I’m currently missing and return to today’s topic – maybe by next year I’ll find some of the missing pieces of the puzzle.  If not by next year, hopefully I’ll have them all in time for 2016 – the 50th Anniversary of that first Reese’s Peanut Butter Egg test-market.

I hope everyone has a lovely Easter Sunday and that you’ve been able to enjoy some of your own Easter treat favorites this season.

A New York City based writer, editor and sometimes actor. After spending much of the 1990′s in the comic book business helping tell the stories of Marvel Comics’ X-Men as series editor, he has since split his time between developing his own entertainment properties while still consulting and working on others. Having been described as “the Indiana Jones of lost and forgotten candy”, Jason is one of the country’s premier candy collectors and historians with his discoveries appearing in countless blogs, magazines, newspaper articles, and books. Always happy to share his knowledge and unique perspectives on this colorful part of our popular culture, Jason has consulted with New York’s Museum of Food and Drink and has also been a featured guest on Food Network’s Heavyweights, France’s M6 Capital, and New York’s TheActionRoom.com. My Google Profile+
View all posts by Jason Liebig →
This entry was posted in 1960's, 1970's, 1980's, Easter, Hershey, Holiday, Peanut Butter and tagged bunnies, bunny, candy collecting, candy collection, candy collector, candy wrapper collection, candy wrapper collector, collectible, collecting candy, confectionery, confections, Easter, holiday, packaging, Reese's, sweets, vintage candy wrapper, wrapper. Bookmark the permalink.