The Rich History of the Snickers Munch Bar – Revised and Revisited!

Just under a year ago here on CollectingCandy.com, I posted my first look back at the Snickers Munch bar.  At the time I had uncovered six unique wrapper designs across the four decade lifetime of the brand, but I was missing large gaps of years.  Since then, I’ve found two distinct wrapper designs I was missing as well as a few subtle packaging variations from over the years.  Today I’ll be sharing these new discoveries, and since it’s been a year I’ll include some of what was covered during my initial look back at the wonderful Snickers Munch bar brand.

One of my new discoveries is what I believe to be a “year one” Snickers Munch bar wrapper.  Though it’s quite similar to the earliest wrapper example I had previously shown, this version sports a 10-cent printed-on price, as well as an earlier version of the M&M/Mars logo.  Because of that, I believe this dates back to 1971 when Mars first introduced the Snickers Munch bar to the public: 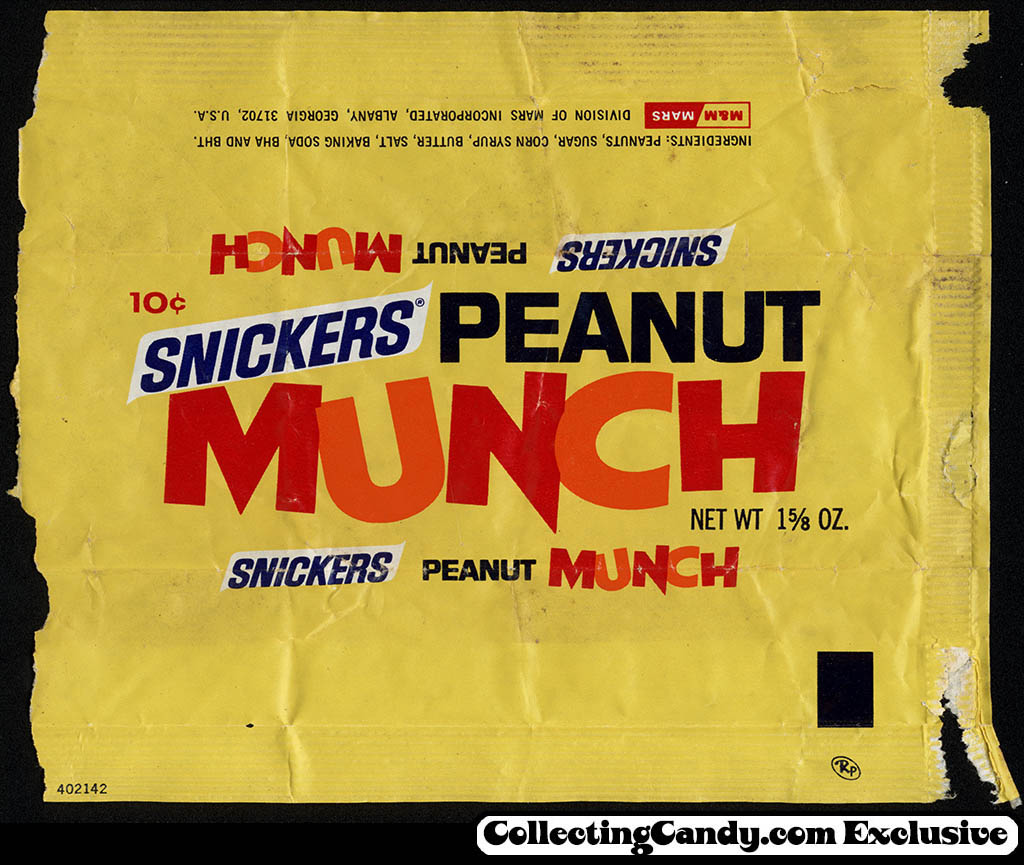 That M&M/Mars logo would soon change, and the printed price would be dropped, as seen on this similar wrapper: 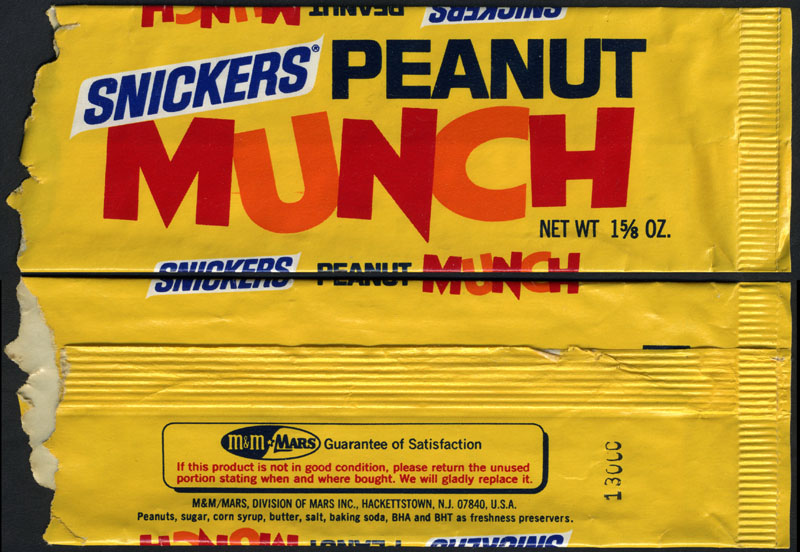 Here’s a great newspaper ad/coupon from the period, which features an October 31st, 1971 expiration date:

As I discovered last year, the mid-to-late 70’s had Munch bar wrappers losing their prominent Snickers branding while gaining a photo of the bar itself, and moving from a coated paper wrapper to a film-type plastic wrapper. 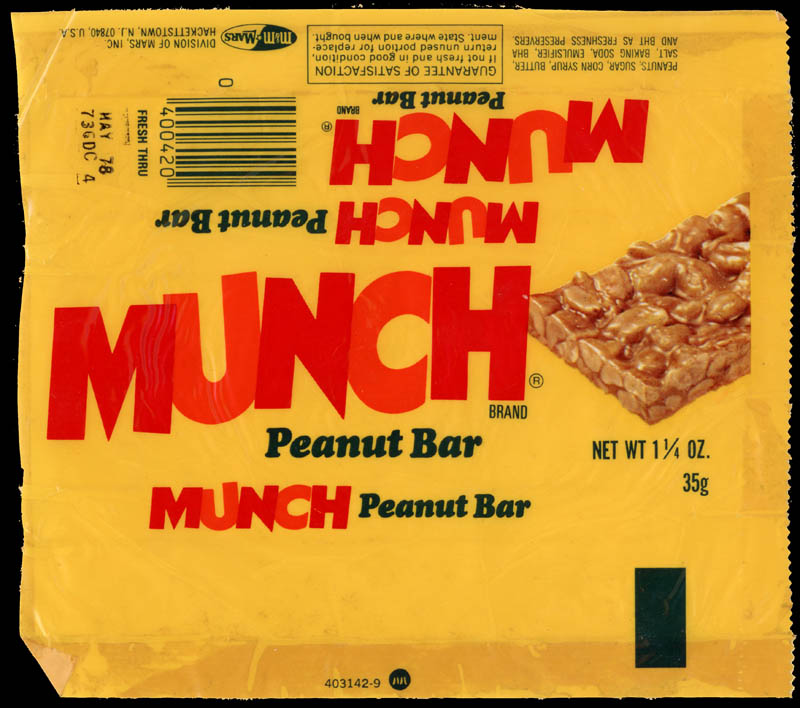 The first major evolution for Munch bar came in 1979, when the logo changed to a single-color, and in my opinion, a less-70’s look.  This time period also sees the bar’s marketing and distribution moved to Mars Snack-Master division (a notable change, and I’ll share the story of the origins of the Snack-Master division at a later date): 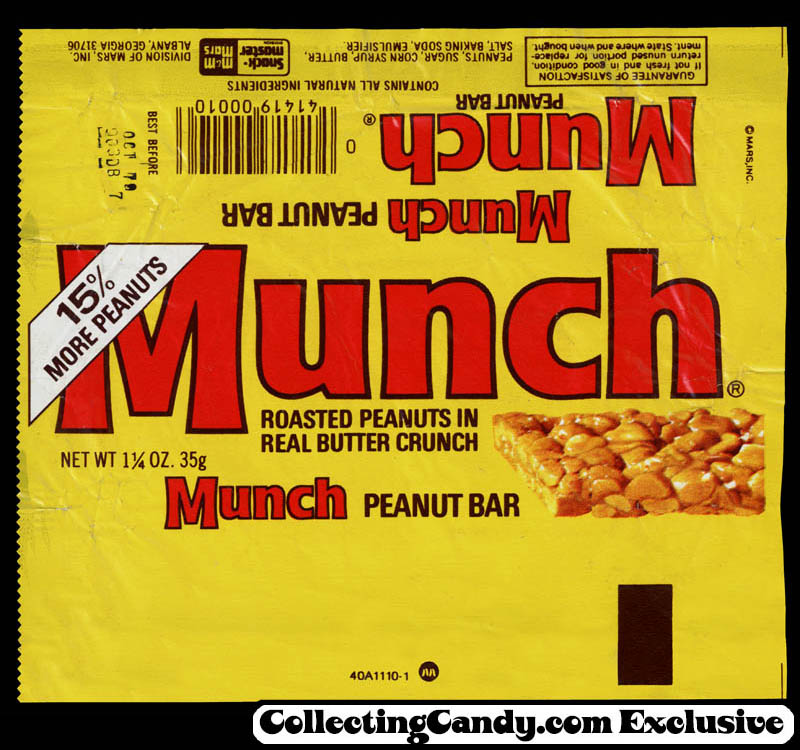 Here’s a vending bar from the following year: 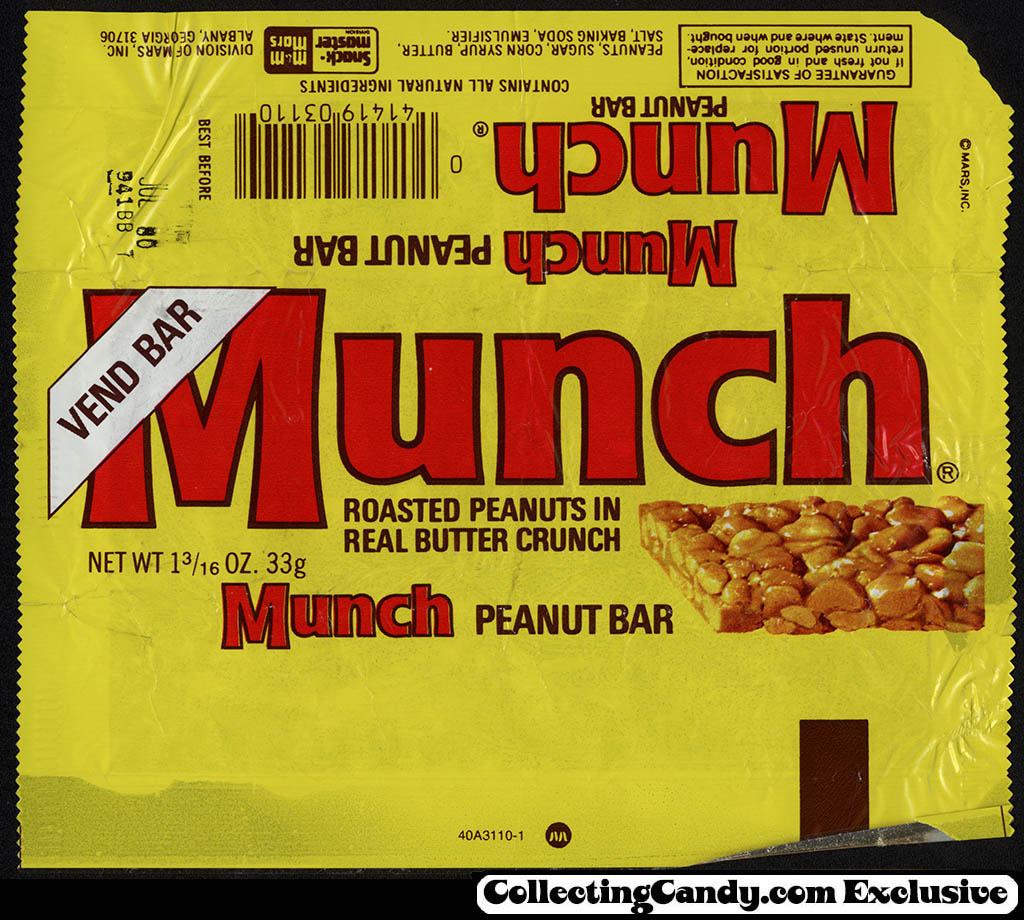 It was at this point last year that I encountered a large gap in the history of the Munch bar.  But I’m happy to report I can now fill in the missing links from those years.

The next refresh and redesign for the Munch bar followed pretty quickly, and by 1982 the wrappers had this look: 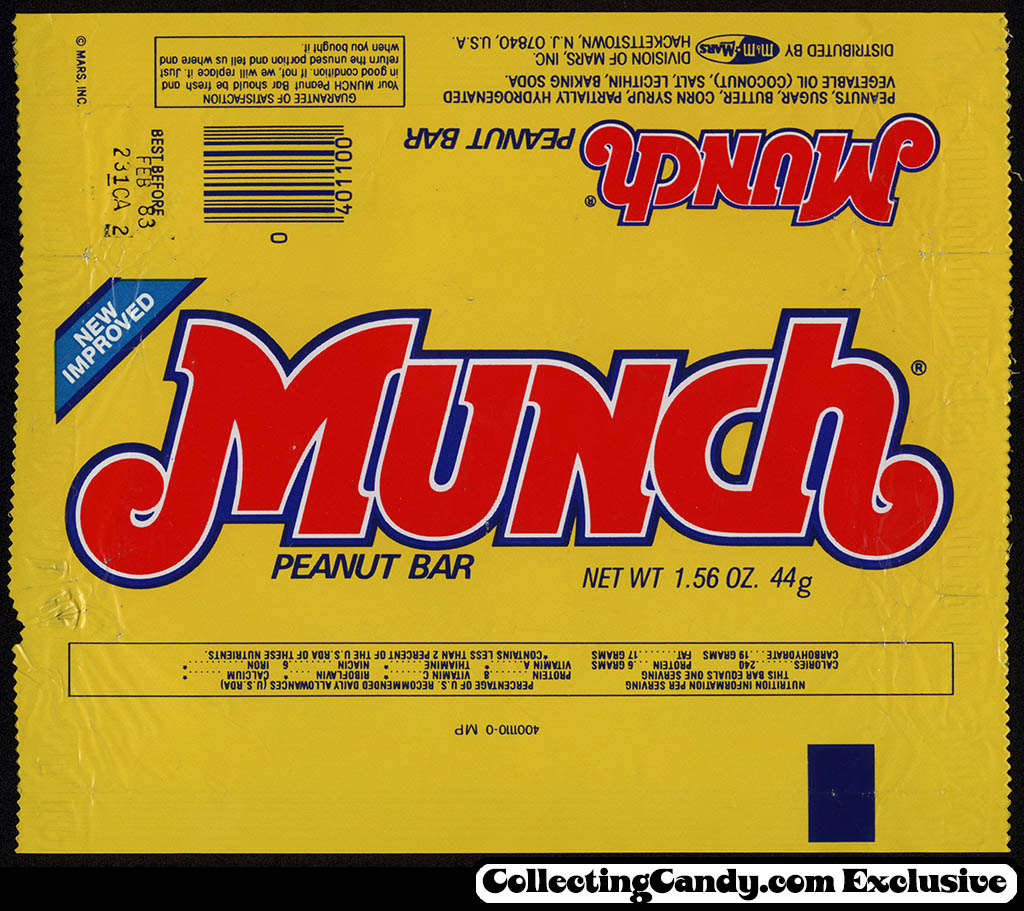 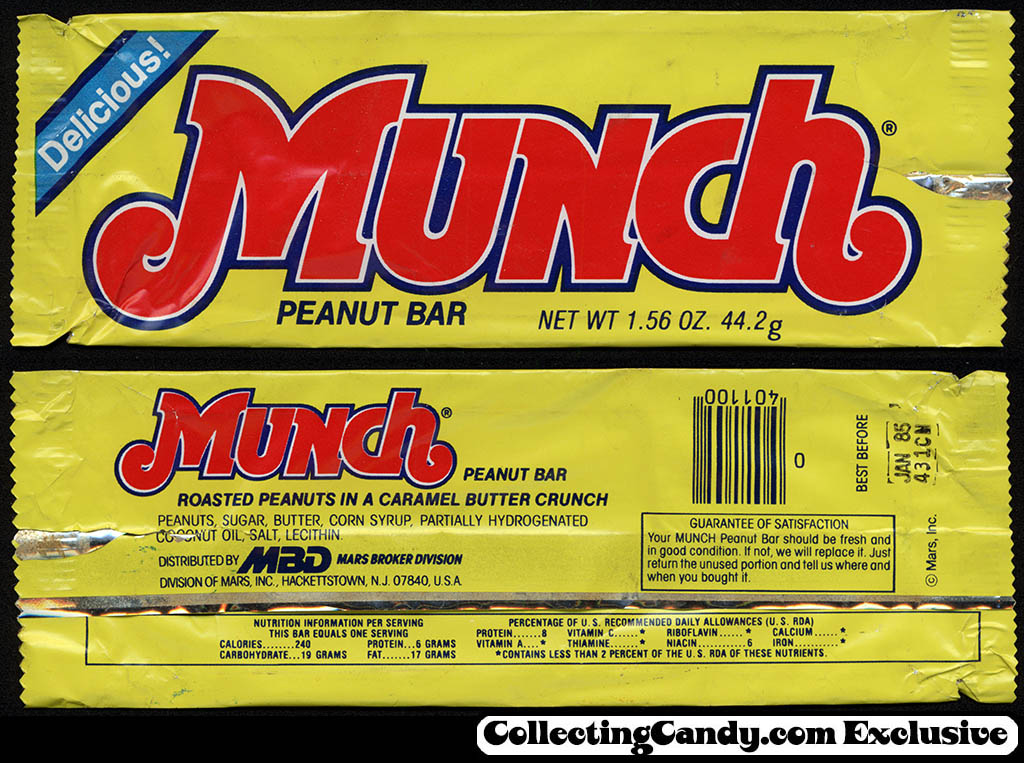 By 1987 the Munch bar would once again see a major look and design change.  This time the intent was to re-brand the Munch bar as a healthy alternative to a standard candy bar.   This example from 1987 also has the attribute of being double-sized so it looked even less like a standard candy bar [Note that the Mars Broker Division is still indicated on the wrapper at this time.]: 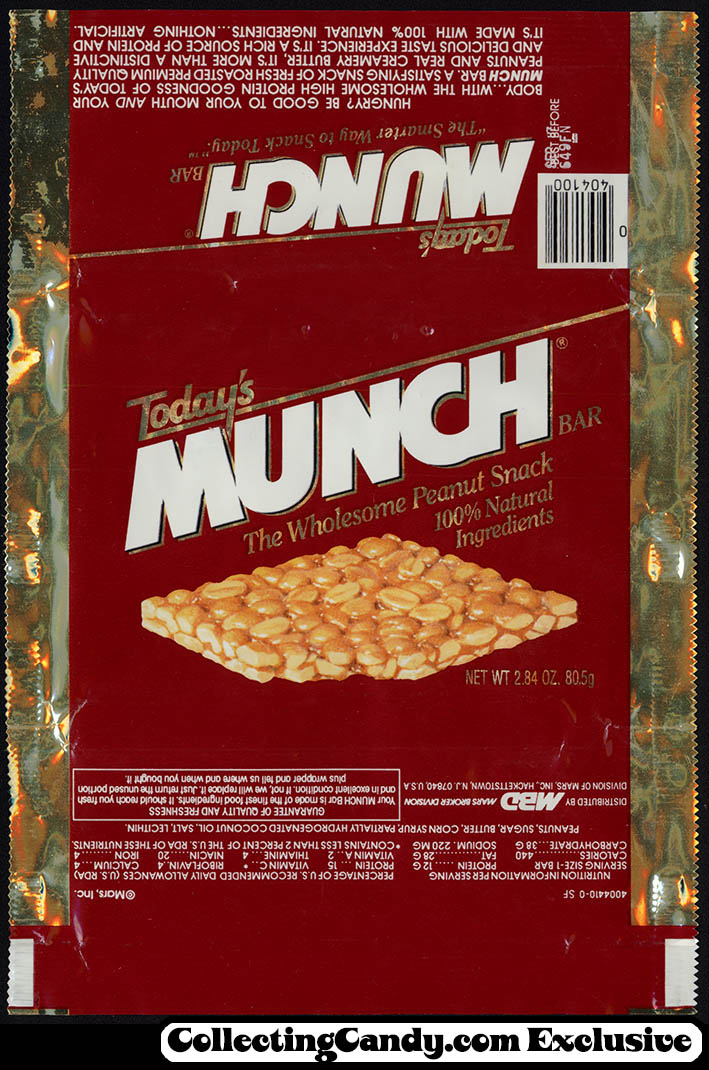 Still featuring much the same design is this next Munch bar wrapper from 1989.  Other than the size difference, this example differentiates itself from the 1987 wrapper by the loss of the Mars Broker Division logo on the reverse.  Instead we see the standard M&M/Mars logo with a “Broker Sales” indicator on the back: 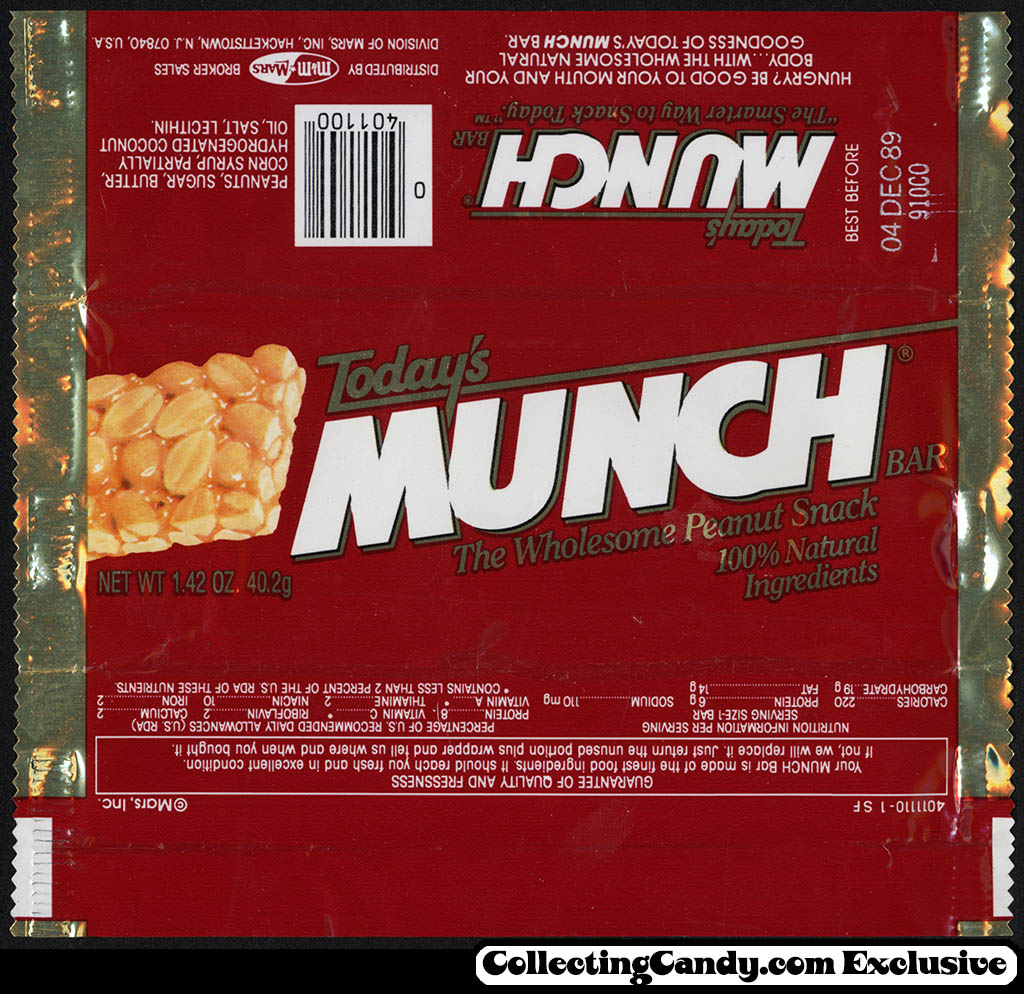 By 1996 the wrapper would once again receive an updated design, though it carried over the general look from the previous.  What’s most notable here is that the Snickers branding would return to the wrapper design following nearly two decades without it.  [Also of note, it would seem that by 1996 the Munch bar was again handled fully by the main division of M&M/Mars – no Broker Division markings or otherwise found on this wrapper.]: 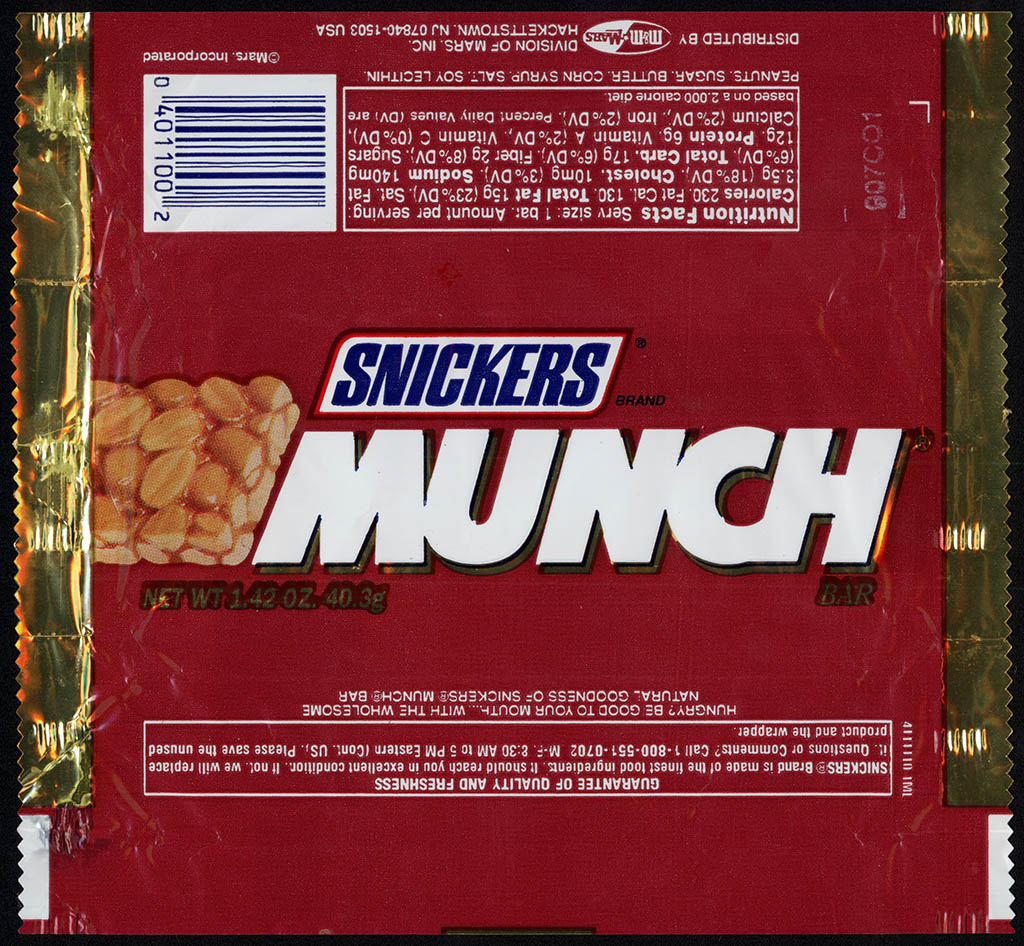 The next design change for the Munch bar is shown on this wrapper from nearly a decade later in 2005.   The prominent Snickers branding that had returned to wrappers in the 1990’s would once again be dropped by the mid-2000’s.   Perhaps I jumped the gun about the the main division of Mars as handling of this one, as the 2005 wrapper would credit the MasterfoodsUSA division of Mars as now being in charge of the Munch bar: 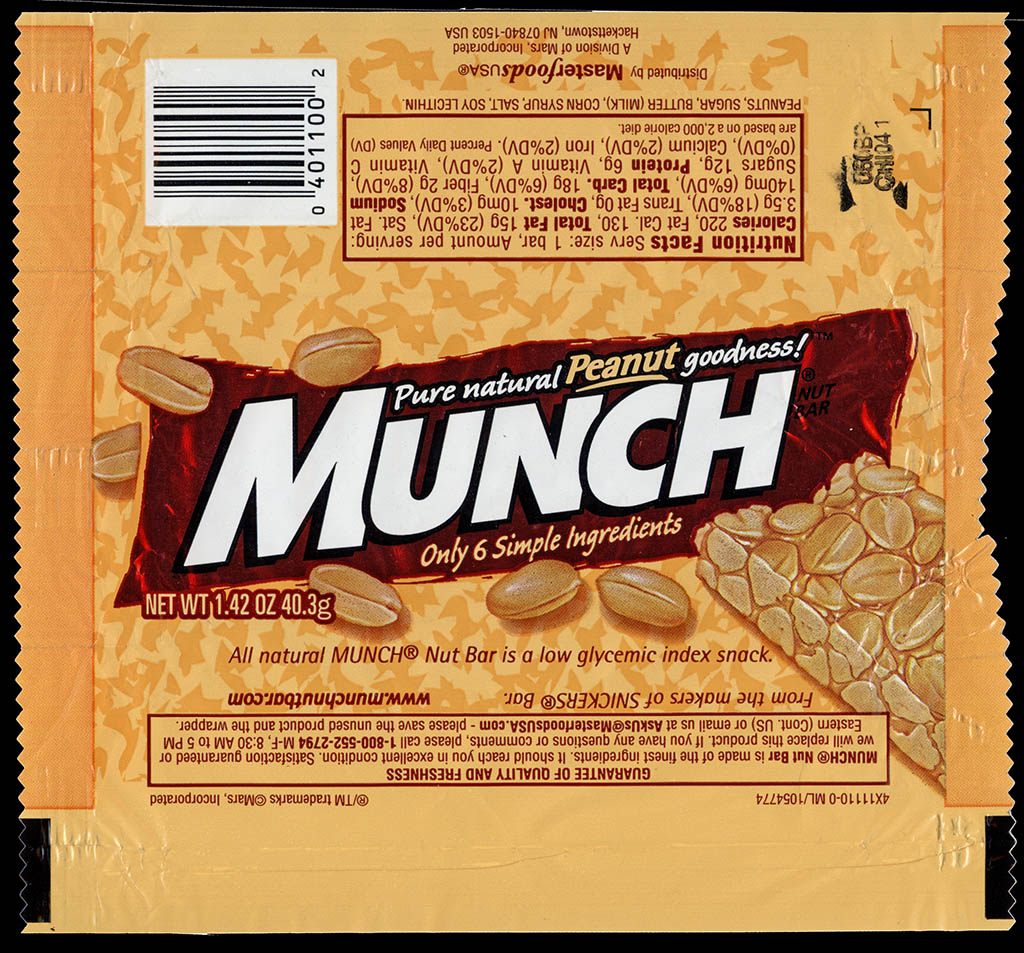 This all brings us up to the current look for the Munch bar and it’s a design that seems to pull from the previous two versions.

As for the division of Mars that the Munch bar is currently handled by?  It’s hard to make out in this image, but this wrapper indicates that it is “Distributed by Mars Chocolate North America, LLC”.   So that clears that up…. I think? 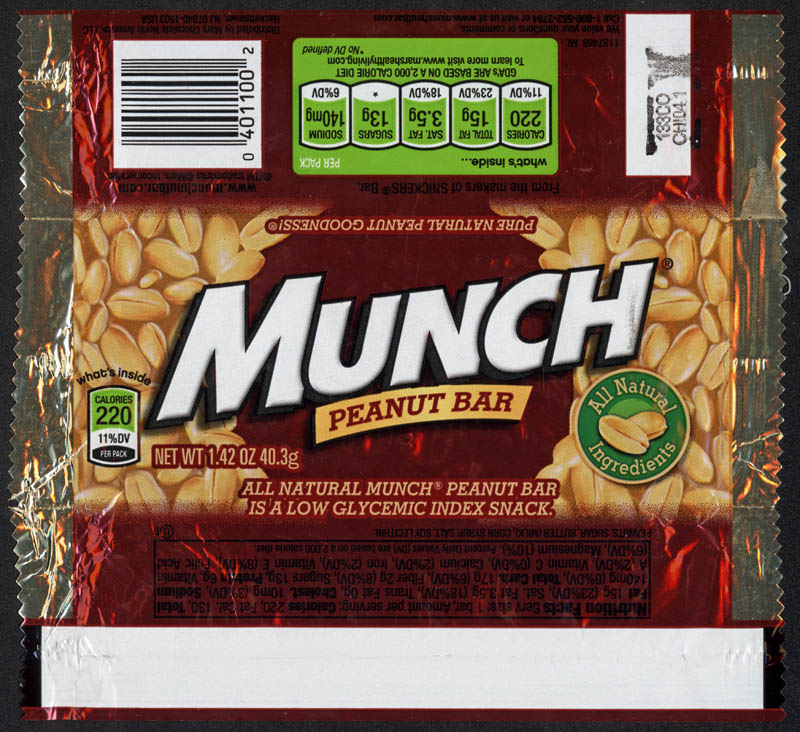 With that wrapper we have come from 1971 through four decades and up to today.  I hope you enjoyed this revised and revisited look back at the history of the Munch bar, and if you were here when I did my coverage last year, I hope you’ve enjoyed the new discoveries made since.

The CollectingCandy.com Snickers Munch bar timeline had been updated to incorporate the major wrapper design changes and I’ll close out today’s post with that.

A New York City based writer, editor and sometimes actor. After spending much of the 1990′s in the comic book business helping tell the stories of Marvel Comics’ X-Men as series editor, he has since split his time between developing his own entertainment properties while still consulting and working on others. Having been described as “the Indiana Jones of lost and forgotten candy”, Jason is one of the country’s premier candy collectors and historians with his discoveries appearing in countless blogs, magazines, newspaper articles, and books. Always happy to share his knowledge and unique perspectives on this colorful part of our popular culture, Jason has consulted with New York’s Museum of Food and Drink and has also been a featured guest on Food Network’s Heavyweights, France’s M6 Capital, and New York’s TheActionRoom.com. My Google Profile+
View all posts by Jason Liebig →
This entry was posted in 1970's, 1980's, 1990's, Mars, Timeline and tagged 70's candy, 80's candy, candy collecting, candy collection, candy collector, candy wrapper collection, candy wrapper collector, collectible, collecting candy, confectionery, confections, Mars, Munch, packaging, peanut, sweets, vintage candy wrapper, wrapper. Bookmark the permalink.

7 Responses to The Rich History of the Snickers Munch Bar – Revised and Revisited!