Today I’d like to talk about a bar that’s been around at least 40 years.   It’s a classic treat with a name that will certainly be familiar to those of you who grew up on the West Coast; Annabelle’s Big Hunk.

Even if you don’t know the name Annabelle’s,  you’ve probably come across their classic candy bar treats like Rocky Road, Abba-Zaba, Look, U-No, as well as the subject of today’s post.

Big Hunk is, appropriately-enough, a big hunk of white taffy-like nougat infused with peanuts.  I’ve always found it to be a rather unique confectionery offering – I’ve certainly never come across anything quite like it.

Over the years, the wrappers for Big Hunk have not been the most exciting or colorful, but I appreciate them for their long-run of consistency.  For as unusual as the candy that they contained was, their wrappers always seemed to be a counter-balance of comfortable familiarity.  Here’s the oldest wrapper I have in my collection, which dates back to the early 1970’s: 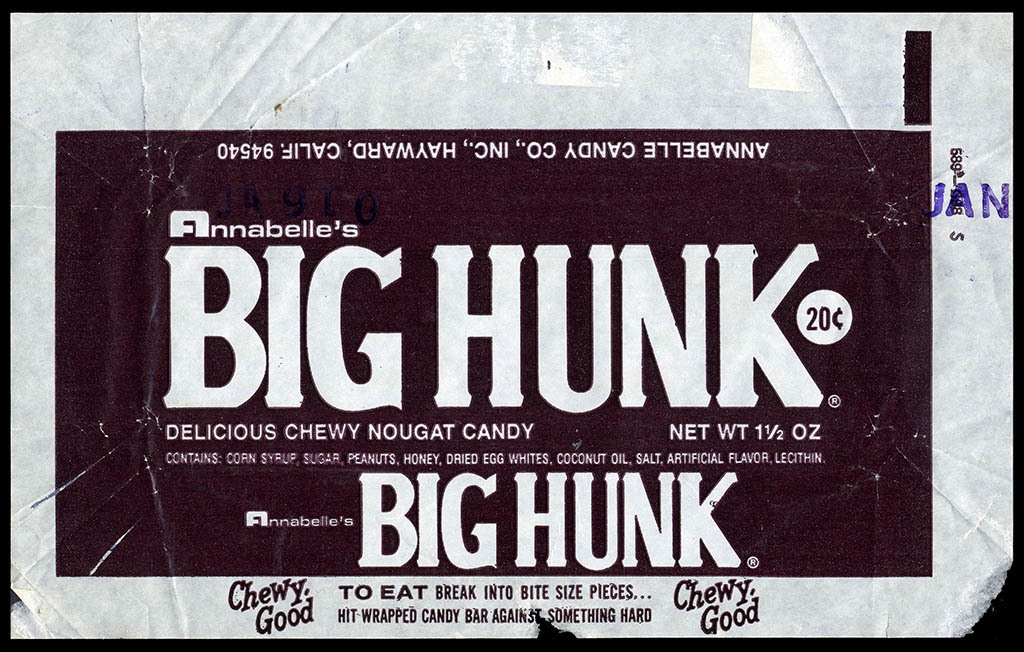 I suspect that is how Big Hunk looked when it was first introduced and it would mostly keep that look for the next four decades, with a few minor changes along the way.

At times Big Hunk would be the star of the Annabelle’s lineup, as you can see from this 1970’s trade ad:

As I’ve already stated, through most of its history Big Hunk has been the picture of consistency, but in the early 1980’s Big Hunk got a little bit bigger.   It went from 1.5 ounces to 2 ounces.

[Editor’s note:  I have found that many people believe that modern-day candy bars are smaller than those of the past and that manufacturers have been “shrinking them on us”.  But the evidence I’ve gathered seems to prove out just the opposite.  Since the 1960’s and 1970’s, most every standard-sized bar and candy package has gotten larger.]

That size change was pretty dramatic for Big Hunk and it would stick, as the 2 ounce increased size has remained in place through to today.

I don’t have any Big Hunk wrappers from the 1990’s to show you, but it’s safe-to-say that they looked a lot like what you’ve already seen, as does the next wrapper I’d like to present.  This one is from late 2011, and it would end up being a notable wrapper as it was the last one to utilize the classic Big Hunk design: 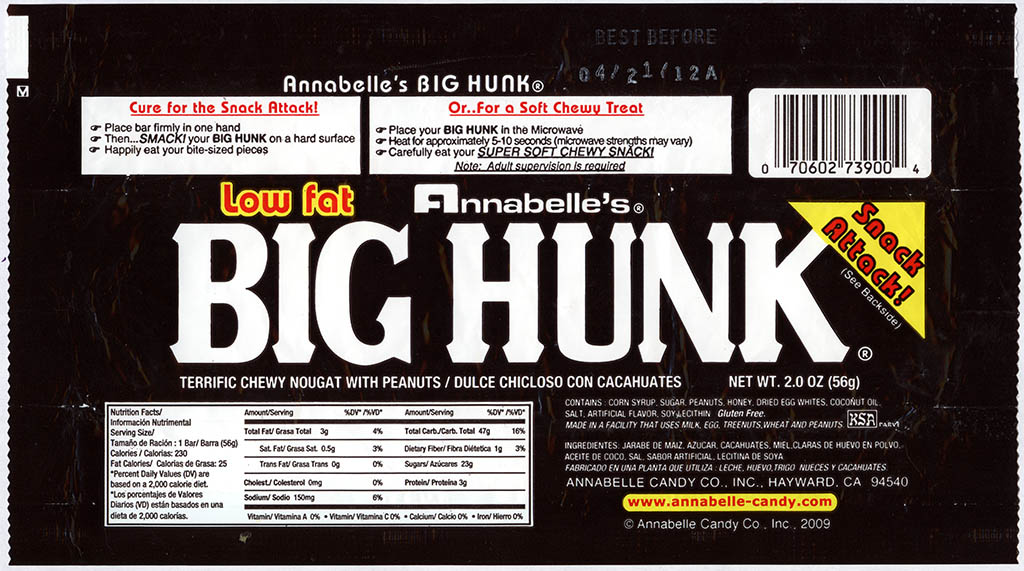 I picked up that “Snack Attack!” bar at the Times Square Toys R Us here in New York City.  On the same day I also found a few Big Hunks with a completely new wrapper design.  I was glad that I was able to pick up both the outgoing wrapper as well as the new incoming one together, which allowed me to know almost exactly when the transition occurred.

The new wrapper retains a touch of the old look with the classic Big Hunk logo now extruded into three dimensions, but this is certainly the most dramatic facelift the bar has ever received in its decades-long life. 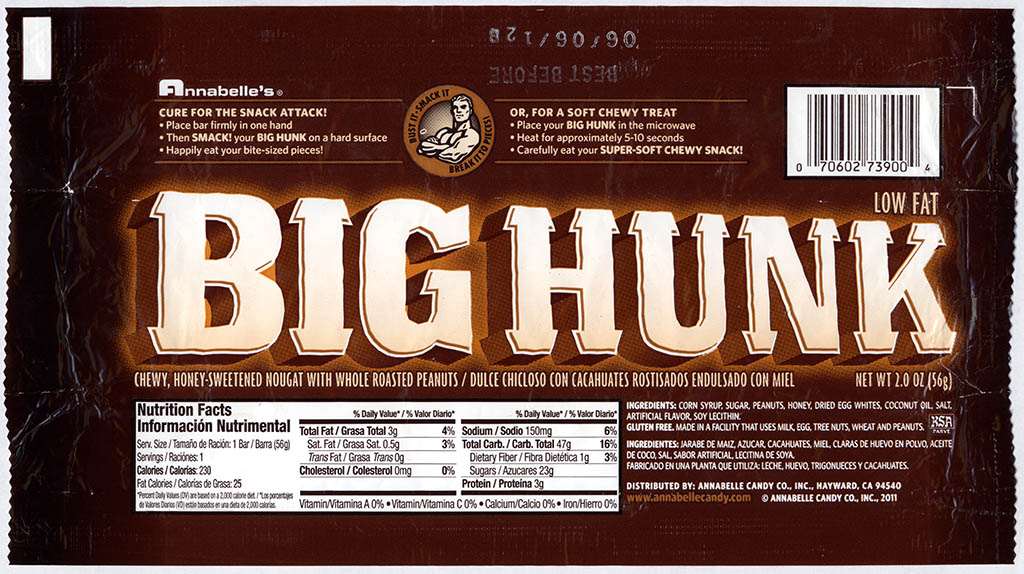 And with that redesigned-look wrapper, we are brought up-to-date on the classic Annabelle’s Big Hunk.  I hope you enjoyed today’s look back on this unusual-yet-timelessly-consistent treat.

A New York City based writer, editor and sometimes actor. After spending much of the 1990′s in the comic book business helping tell the stories of Marvel Comics’ X-Men as series editor, he has since split his time between developing his own entertainment properties while still consulting and working on others. Having been described as “the Indiana Jones of lost and forgotten candy”, Jason is one of the country’s premier candy collectors and historians with his discoveries appearing in countless blogs, magazines, newspaper articles, and books. Always happy to share his knowledge and unique perspectives on this colorful part of our popular culture, Jason has consulted with New York’s Museum of Food and Drink and has also been a featured guest on Food Network’s Heavyweights, France’s M6 Capital, and New York’s TheActionRoom.com. My Google Profile+
View all posts by Jason Liebig →
This entry was posted in 1970's, 1980's and tagged 1970's candy, 1980's candy, Annabelle's, California, candy collecting, candy collection, candy collector, candy wrapper collection, candy wrapper collector, collectible, collecting candy, confectionery, confections, packaging, regional, sweets, vintage candy wrapper, wrapper. Bookmark the permalink.