Mars Mixes it Up – A Tricky Trinity of Timeless Brands: Part Two

A quick recap on yesterday’s Part One:

For decades, Snickers bars were sold as Marathon bars over in the United Kingdom, while the US had a its own different Marathon through the 1970’s.  But in the early 1990’s the UK switched their Marathon to Snickers – and the Marathon name was gone – until it was brought back as the Marathon energy bar “powered by Snickers” in 2005.

Make sense?  If not, go back a day and read Part One.

Two days ago, I discussed Mars’ US Marathon bar (1973-1981), a personal favorite.  Today, I’m going to reveal the little-known origin of that bar, along with how that origin ties into one of Mars’ flagship candy bar brands – 3-Musketeers.

To ongoing readers of this site, it should be clear that I’m a huge fan of the 1970’s US Marathon bar.  It is a big part of what drove my start in this hobby, and it remains a source of nostalgic enjoyment for me.

Aside from a few pieces of mythology and sales details on the brand, I’d thought I knew the story of Marathon bars pretty well.  But just over a year ago, I discovered a chapter to the US Marathon story I never knew – and one that ties the US Marathon’s origins directly to Mars’ other classic brand, 3-Musketeers.

It started when fellow collector Brandon Coker pointed me to an eBay seller offering vintage ads from German kids magazines and comics.   Most of the ads were for brands I was unfamiliar with, or featured unfamiliar mascots paired up with the brands I did know. 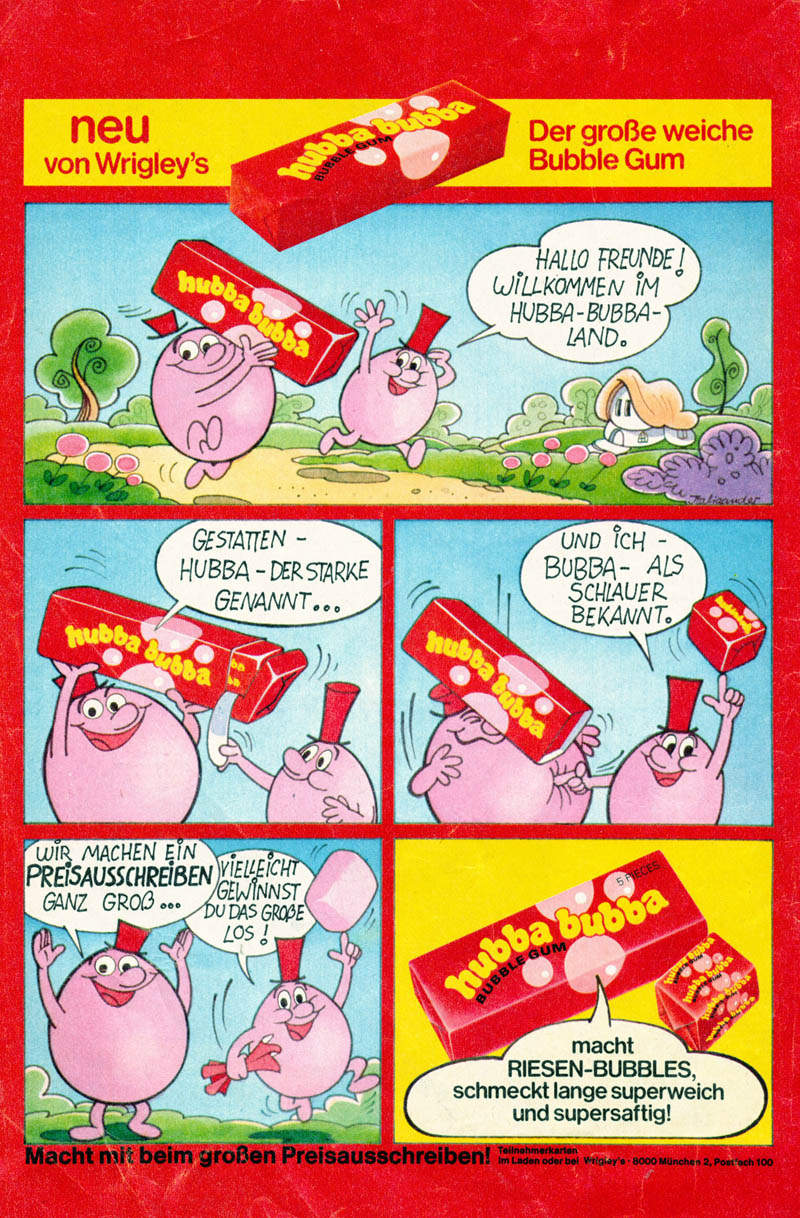 As I was browsing, I spotted an ad for 3-Musketiers (note the Dutch spelling) and did a double take.

At first, I didn’t know what to make of it.  Upon further examination it was clear that the candy bar featured in the ad was nothing like the 3-Musketeers I knew, but was in fact the same confection as the US Marathon bar of my youth. 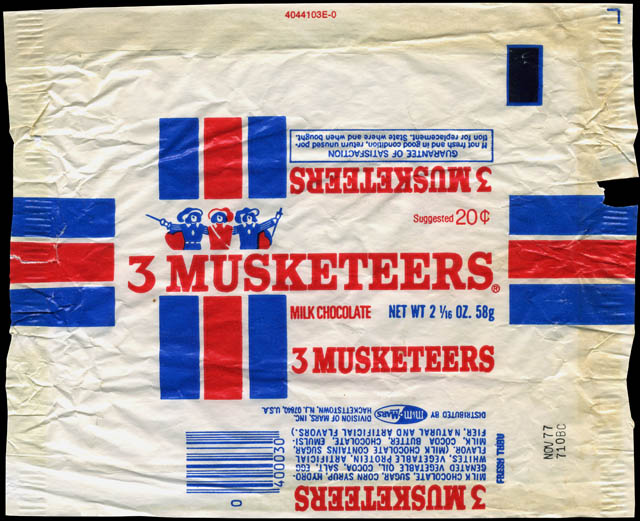 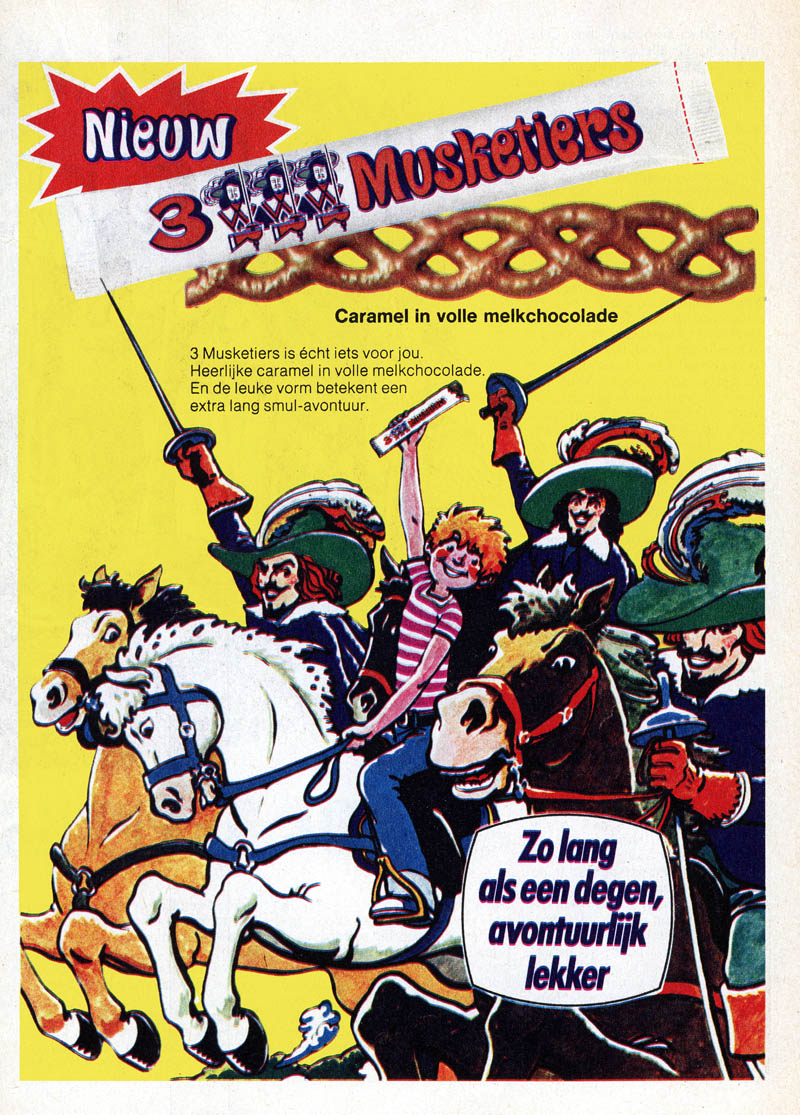 From out of the blue, there it was – a Marathon bar, unexpectedly packaged in an unfamiliar 3-Musketeers wrapper.

By this point in my collecting, I was used to being surprised, but this knocked my nerdy socks off.

I contacted the seller who turned out to have a few additional ads for this brand.  We worked out a deal for those and a short time later, I had them in-hand.

They were a mix of Dutch and German origin.  I looked them over and found the earliest dated to March 1972 – a full year before the US Marathon was introduced!   [Edit:  I now suspect that the undated ad that indicates “Nieuw” (New) is from a year earlier – 1971.] 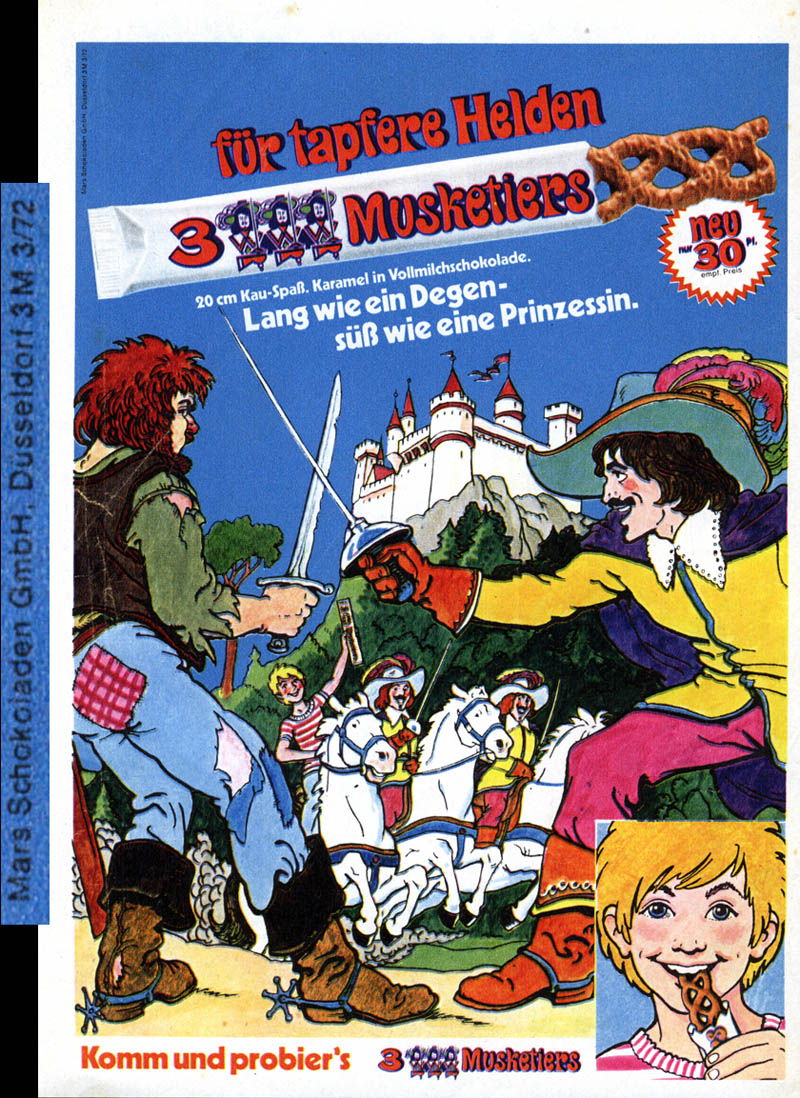 The fact that this brand predated the US Marathon by a year, possibly two, enhanced my understanding of the Marathon story.  Cadbury’s CurlyWurly was introduced to the UK in 1970, and it’s possible that this was Mars’ answer to that, launched as early as the following year, 1971.

It must be assumed that the 3-Musketeers brand name was not being used in Europe before this, so Mars put it to work for their new bar.  [Note: My research has so far concluded that the US version of 3-Musketeers was never sold under any other names in Europe.] 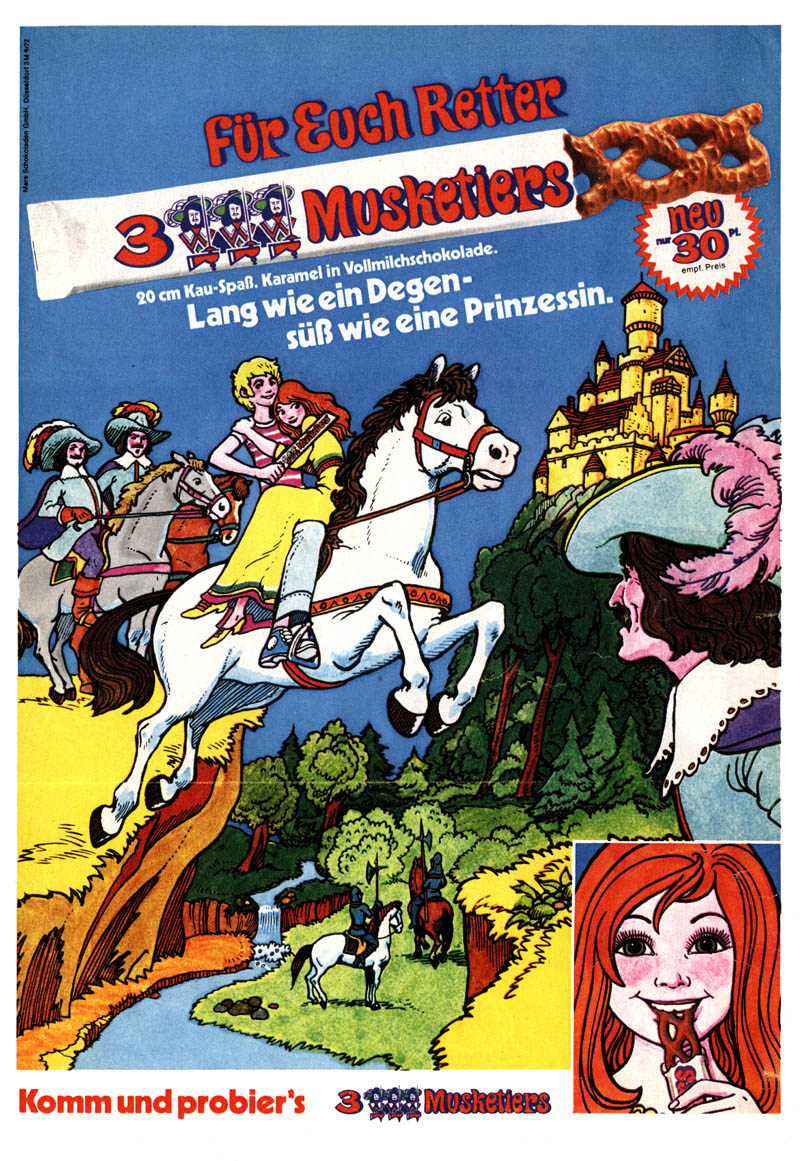 Beyond what these ads revealed about the history of my childhood favorite, they also featured the best images I’d come across of the actual look of the Marathon candy bar itself.  While similar to the CurlyWurly, the style and shape of the chocolate-covered-caramel braid of the Marathon was different.   With these ads, I could now see (and show) what a 1970’s US Marathon bar looked like.

Being the fan I am, I wanted (needed) an example of one of these pre-Marathon wrappers for my collection, but I knew it wouldn’t be easy to find.

In the past, I’d acquired wrappers that were saved for mail-in redemption offers but never sent in.  So, seeing the following ad gave me hope that a few might be out there.  Saved, but not redeemed, and waiting for me to rescue them. 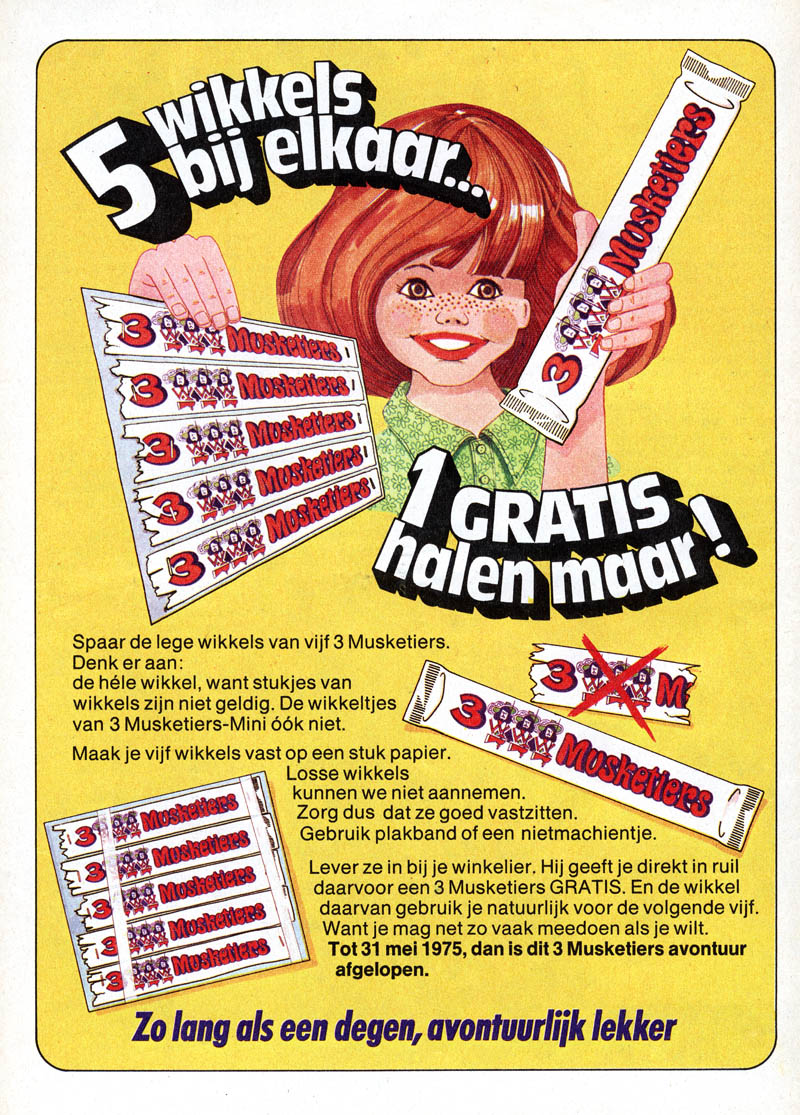 If the other ads I’d seen knocked my socks off, this final one blew me away entirely. 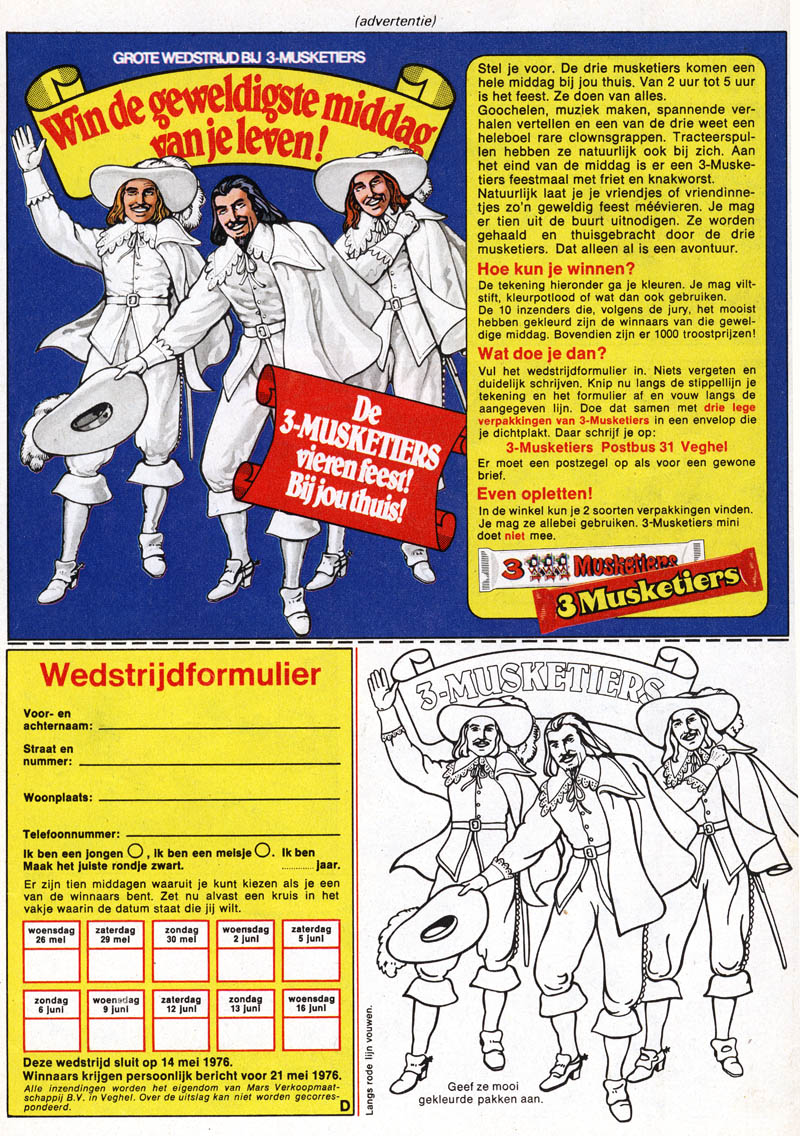 Yes, there it was… visual evidence that at some point in 1976, Mars transitioned the European 3-Musketiers wrapper to the design used on the US Marathon bar.  Incredible!

It was at this point, I went into full collector hunt-mode.   I reached out to other candy folks I knew, but no one had heard of this one, let alone seen it.   I was coming up empty, until I contacted Martin Mihal of The Chocolate Wrappers Museum.

I’ve written about Martin and his site on our Links page as he is one of the premier collectors of chocolate wrappers in the world.  Martin responded that he did have one of the Dutch 3-Musketiers wrappers I was searching for.  He was also nice enough to share a scan of the wrapper with me:

I’d managed to track one of these exotic pre-Marathon wrappers down, but it wasn’t mine yet.  I asked if there was a trade we could do that would convince Martin to release this wrapper from his collection, so that it could join mine.  Martin was understandably unwilling to part with this wrapper, but he did say he’d keep an eye out for another, in case one ever turned up.

While I wasn’t able to add that wrapper to my collection (or the later variation of it) this time around, I did learn a lot that I never knew before.  That allowed me to build upon the  historical knowledge of tasty childhood favorite.

My desire for the wrappers remains, and the hunt continues…

And that wraps up part two of Mars’ Tricky Trinity.  So what did we learn?

And now for an extra bit of Collecting Candy wishful thinking.  From the “things I’d like to see together in my collection someday” category: 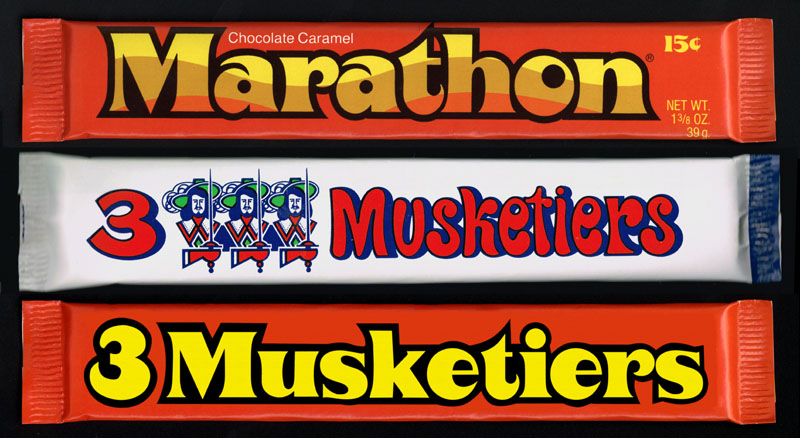 A New York City based writer, editor and sometimes actor. After spending much of the 1990′s in the comic book business helping tell the stories of Marvel Comics’ X-Men as series editor, he has since split his time between developing his own entertainment properties while still consulting and working on others. Having been described as “the Indiana Jones of lost and forgotten candy”, Jason is one of the country’s premier candy collectors and historians with his discoveries appearing in countless blogs, magazines, newspaper articles, and books. Always happy to share his knowledge and unique perspectives on this colorful part of our popular culture, Jason has consulted with New York’s Museum of Food and Drink and has also been a featured guest on Food Network’s Heavyweights, France’s M6 Capital, and New York’s TheActionRoom.com. My Google Profile+
View all posts by Jason Liebig →
This entry was posted in 1970's, Chocolate, Uncategorized and tagged 1970's, 3-Musketeers, 70's, candy, collecting, collector, confection, Dutch, Europe, German, history, M&M-Mars, Marathon, Mars, Netherlands, nostalgia, packaging, sweets, vintage, wapper. Bookmark the permalink.

3 Responses to Mars Mixes it Up – A Tricky Trinity of Timeless Brands: Part Two