Before I get into what I’ve got in my collection, I’d like to mention couple other takes on today’s topic.  First, there’s a brief blog entry on the history of Sweethearts over at the Baking Bites blog.   Then there’s Allison Fishman Task’s must-see video coverage of the topic over at Blue Ribbon Hunter which includes a short video of the making of Sweethearts during a visit to the Necco factory.  If you’ve got the time and are interested in seeing more on Sweethearts, I encourage you to check out both of those.

I don’t have much in my collection on Sweethearts, as it’s a brand I’ve long overlooked.  But while putting today’s post together, I’ve developed a new appreciation for conversation hearts in general and Sweethearts specifically, so much so that next year I plan to pick up all of the flavor variations that Necco and Brach’s put out.

So with all of that preface out of the way, I’d like to get to the packages.  Here are the few pieces of Sweethearts candy packaging I’ve gathered for my collection:

This first example is from when I was a kid, and every time I look at it, I’m reminded of those early grade school Valentine’s Days: 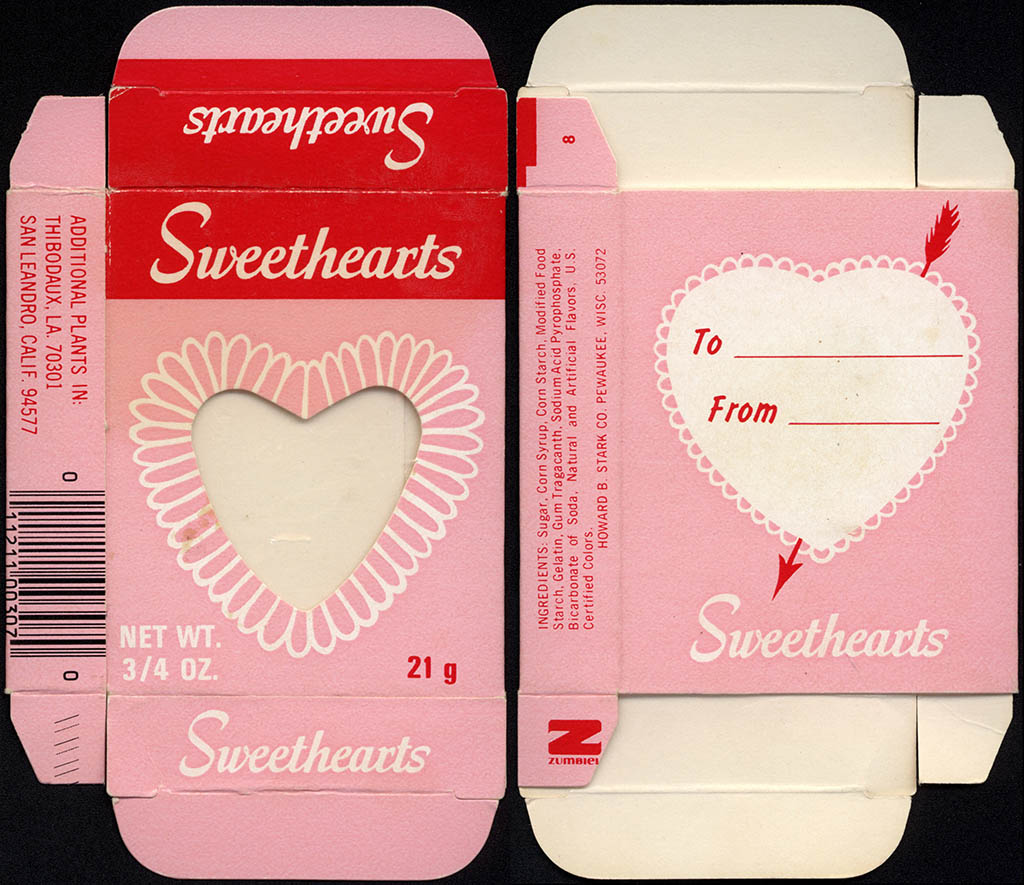 In 1983 Sweethearts would have a different design and one which it would carry on well into the 1990’s: 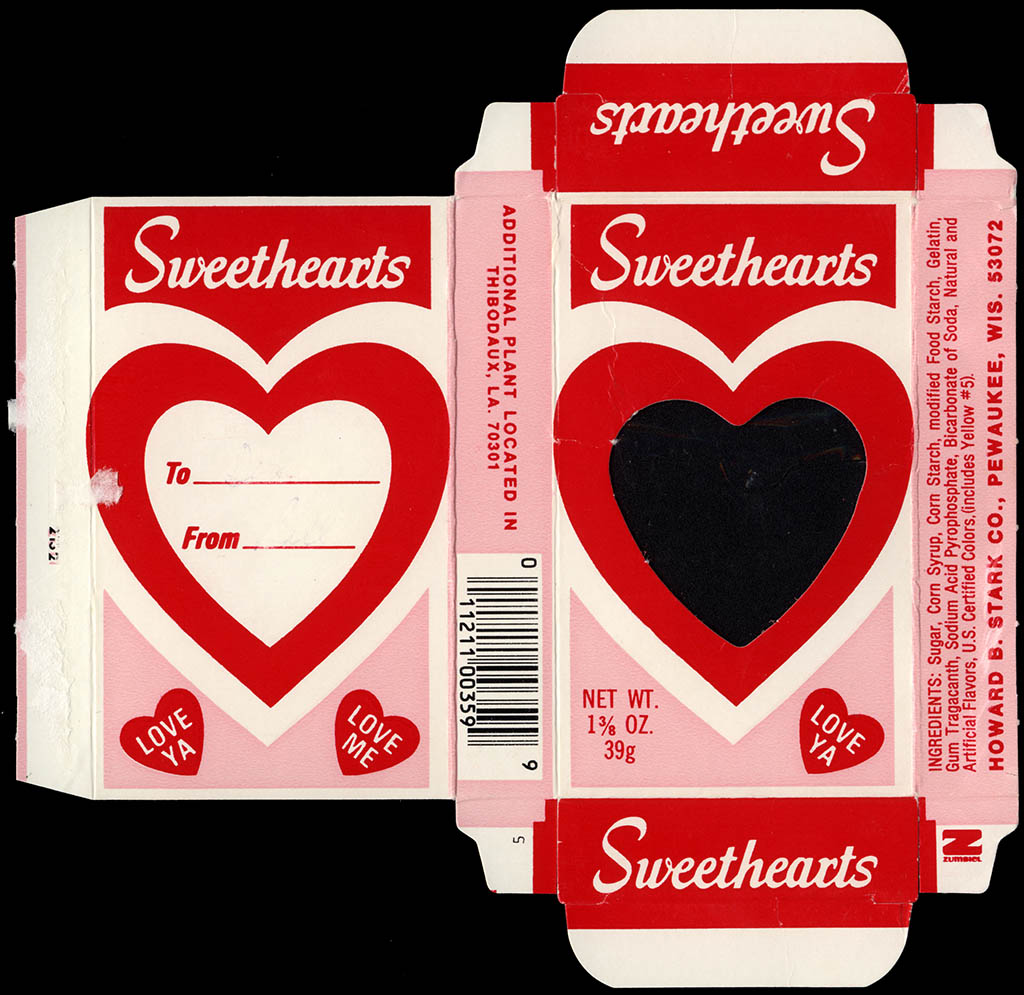 The display boxes during this era of Stark Sweethearts were pretty striking, with a metallic foil cardboard.  Here’s an image of one pulled from a 1984 trade ad: 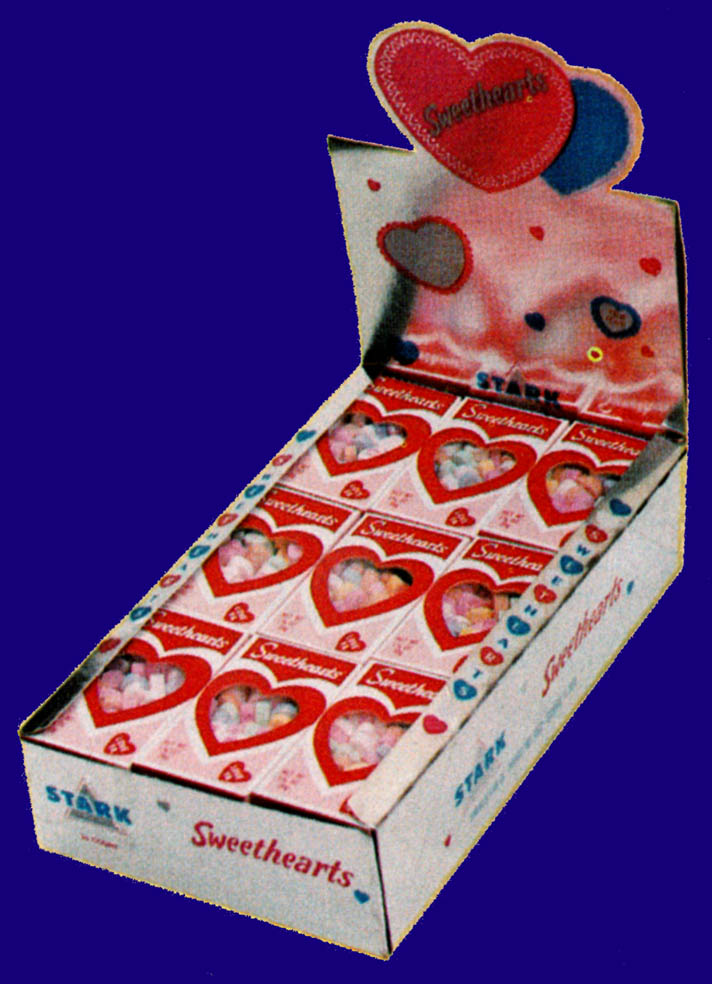 The next box I have for Sweethearts is from the mid-2000’s, though I do have a trade ad from the 1990’s.  I believe the early 90’s was when Stark was acquired by Necco, as is evidenced by the joint logo seen on this ad: 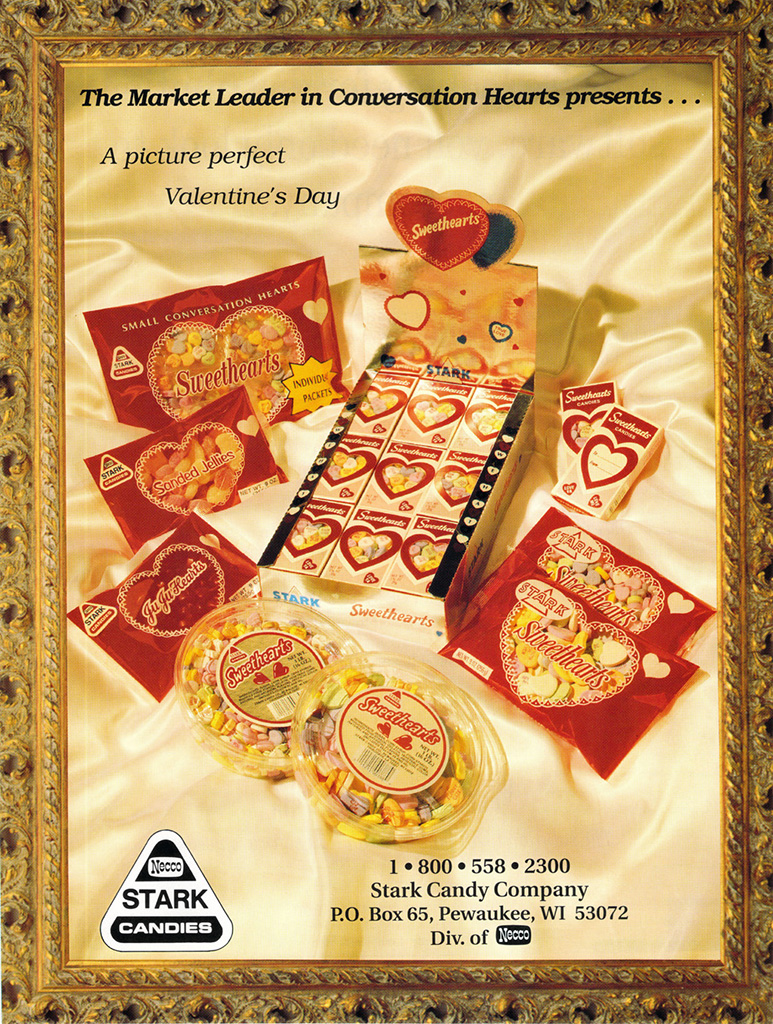 That 1993 ad also shows a design for Sweethearts that is largely the same as from a decade earlier.

I’m not sure exactly when Necco gave Sweethearts their next facelift, but by the mid-2000’s the boxes had a new look and Necco had added a chocolate-flavored version to the mix: 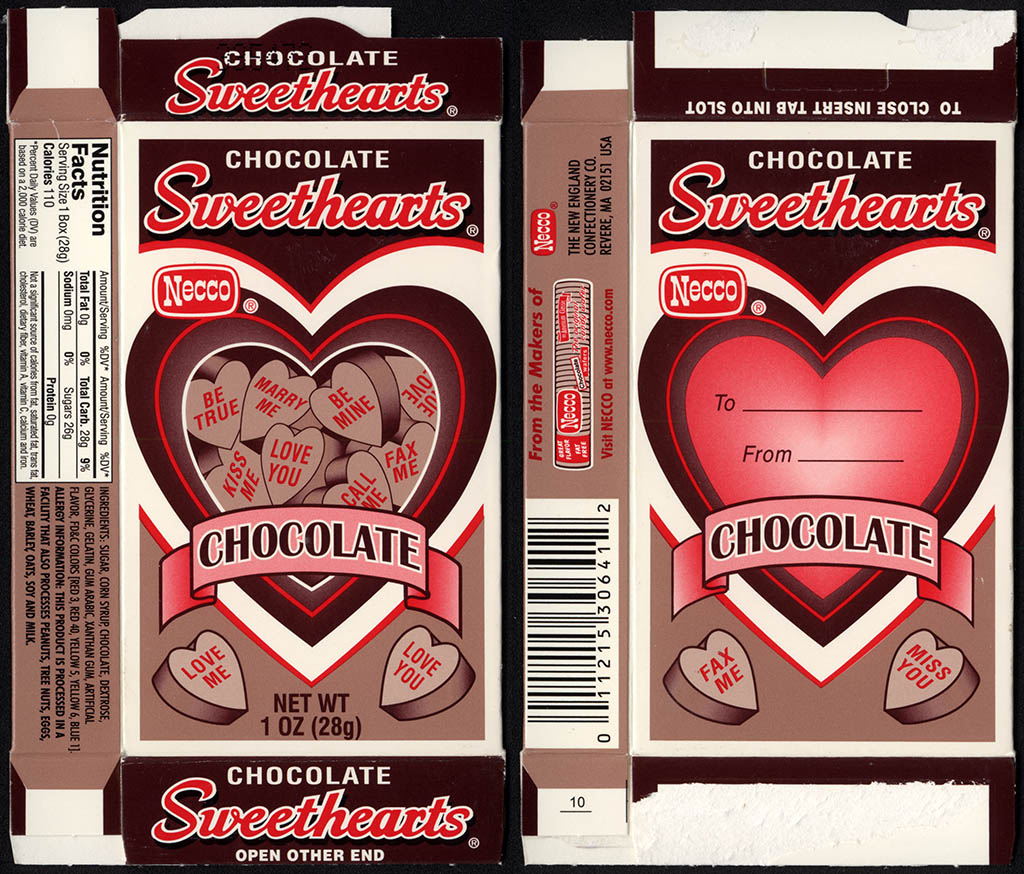 I believe the next Sweethearts design showed up soon after that.  The next piece I have to share is this really cool pack for Necco Sweethearts Gum, from 2005: 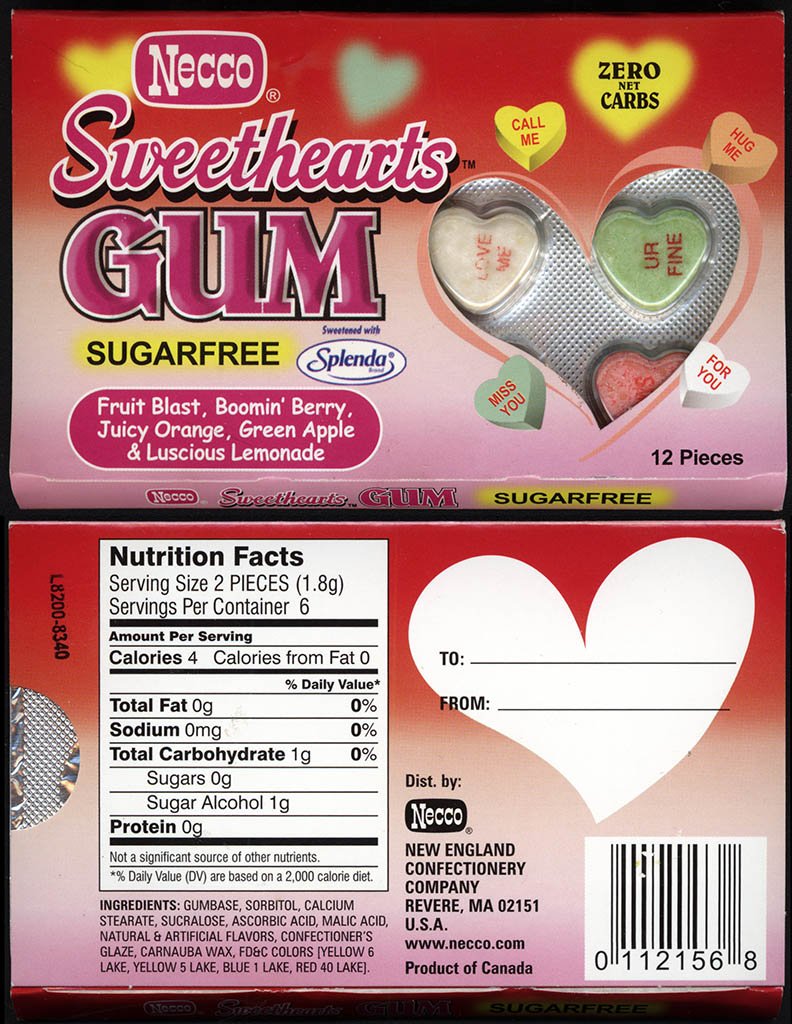 And a matching standard box from a few years later: 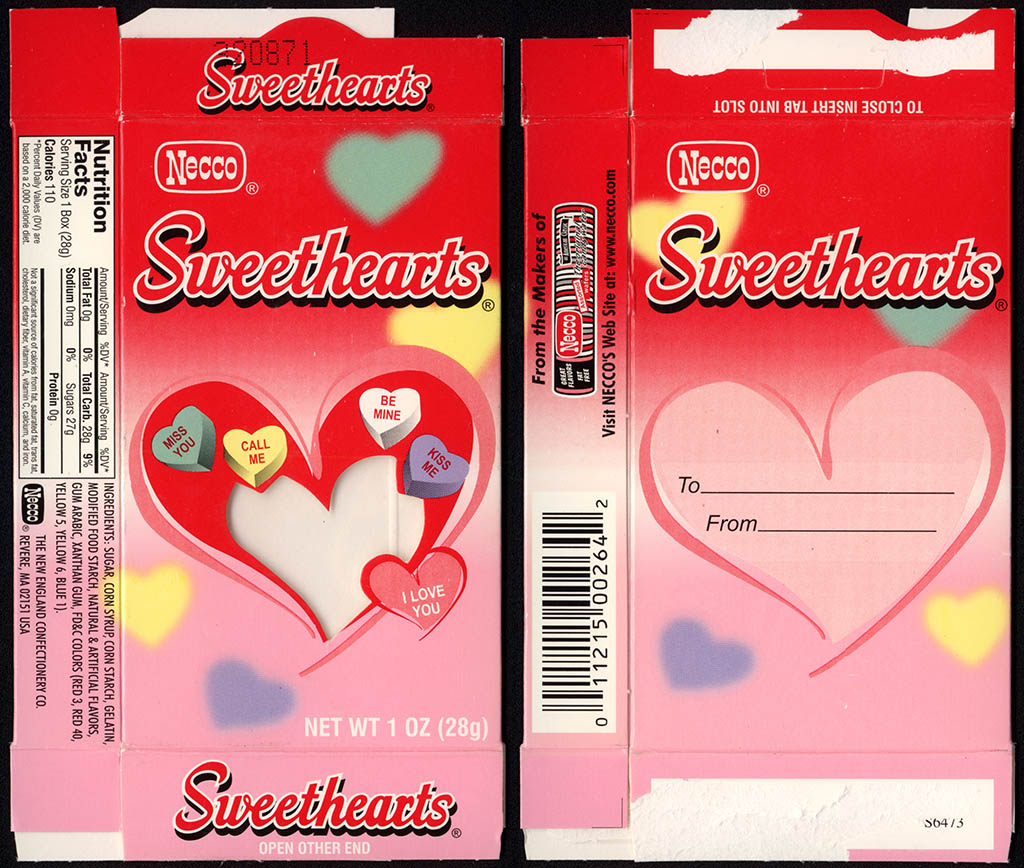 And finally, the modern look for Necco’s Sweethearts, which present a bold design with the conversation heart front and center: 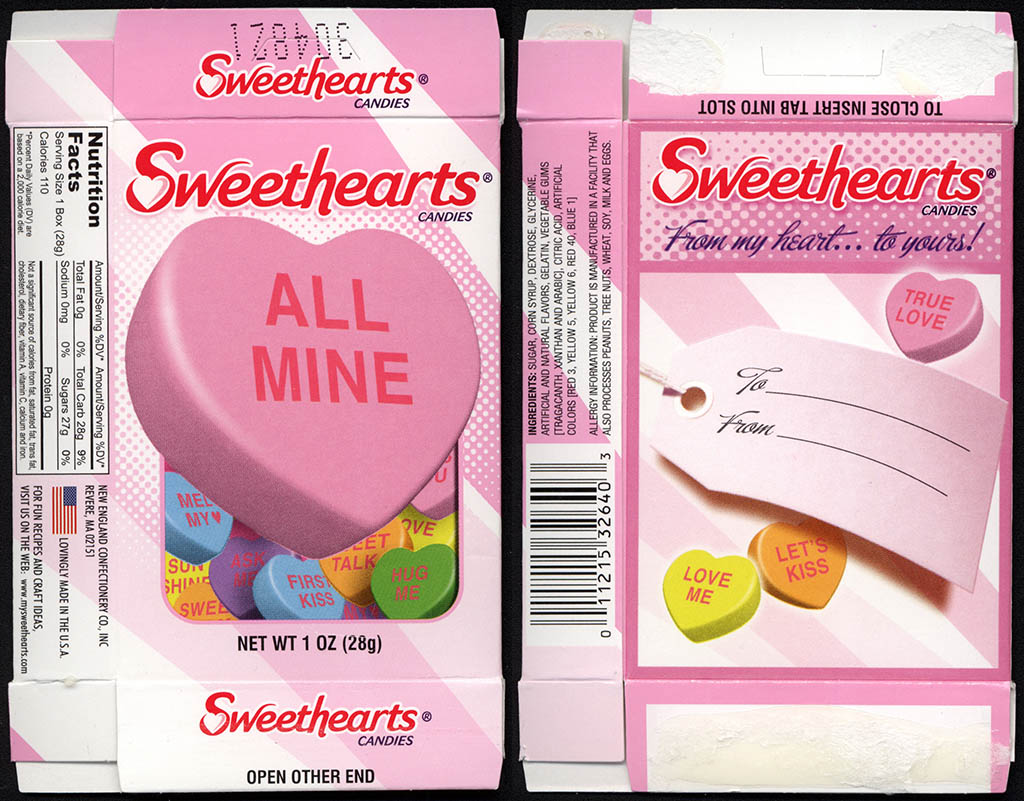 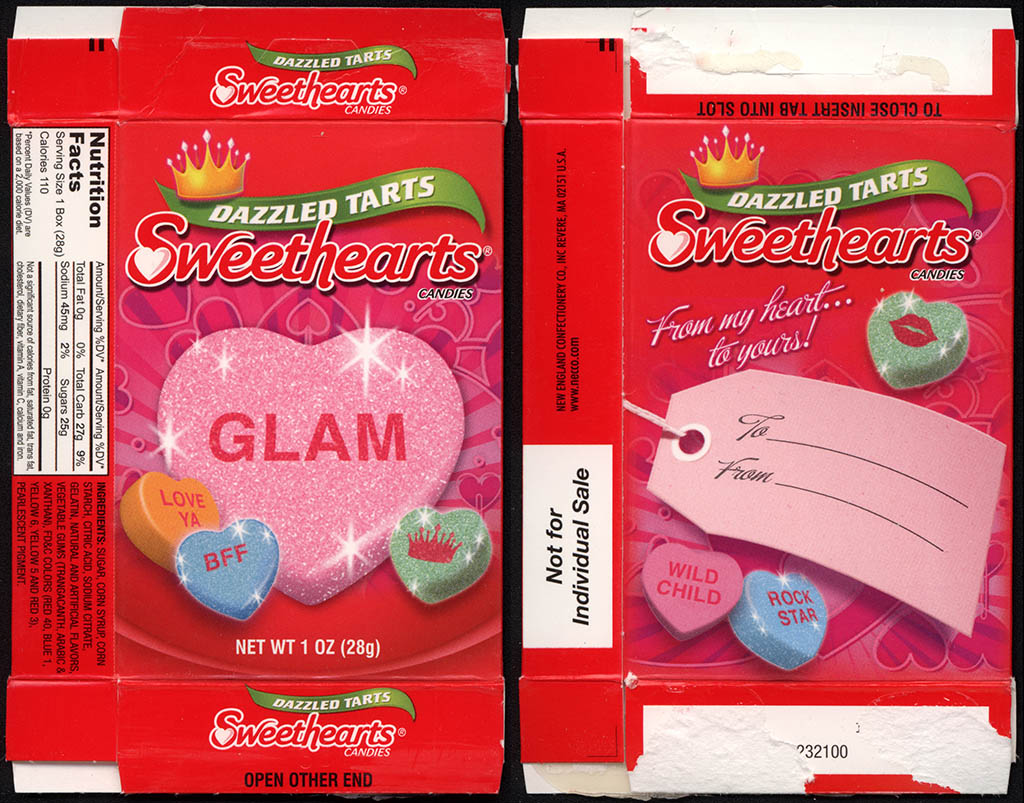 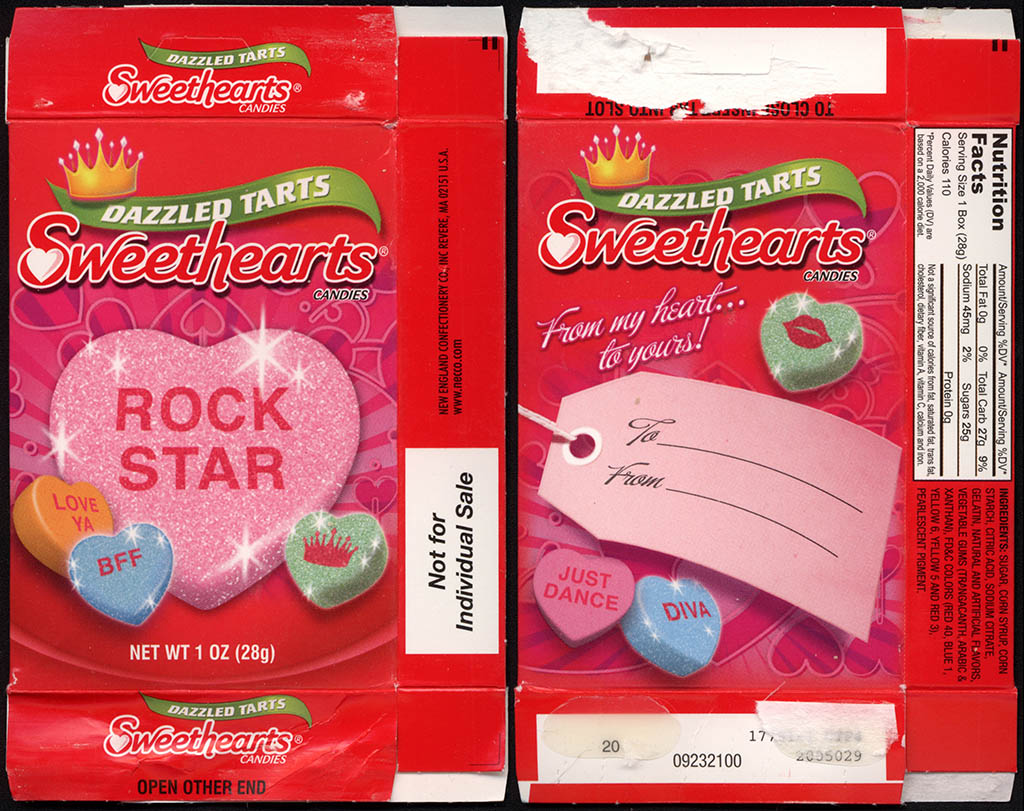 Here’s a large theater-sized box for the Dazzled Tarts: 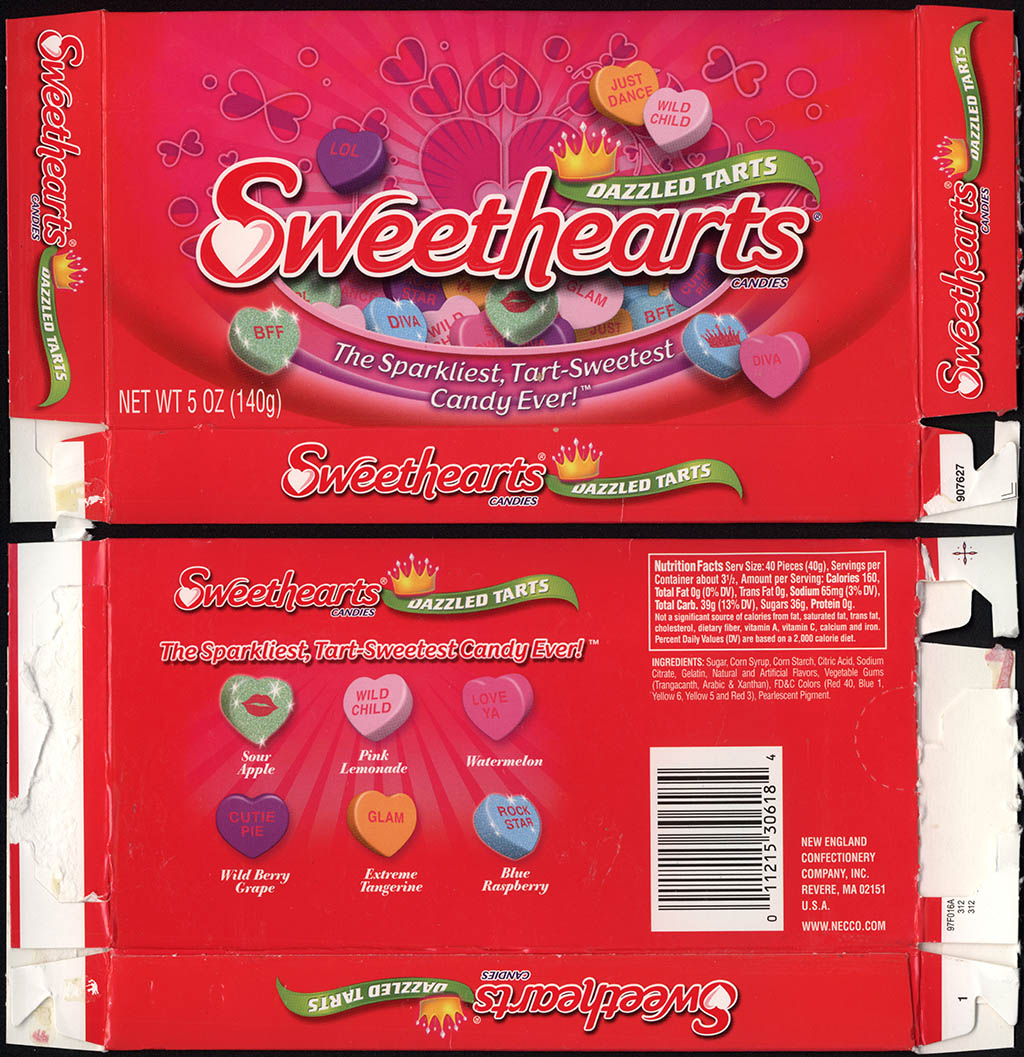 While shopping for Valentine’s candy this year at Target I picked up quite a few things but somehow didn’t pick up any Sweethearts.   The design for the standard box was the same as last year, but there may have been flavors I don’t have.   Next time I’ll definitely be picking them up.

Though I almost never pick up candy tins, I was tempted to pick up these pieces, which were also at Target when I did my Valentine’s candy hunt last month.  This is a series of three different limited edition Sweethearts tins, each with great designs.  I had already spent the limit of my Valentine’s candy budget so I didn’t buy any, but I did snap this photo – aren’t these neat? 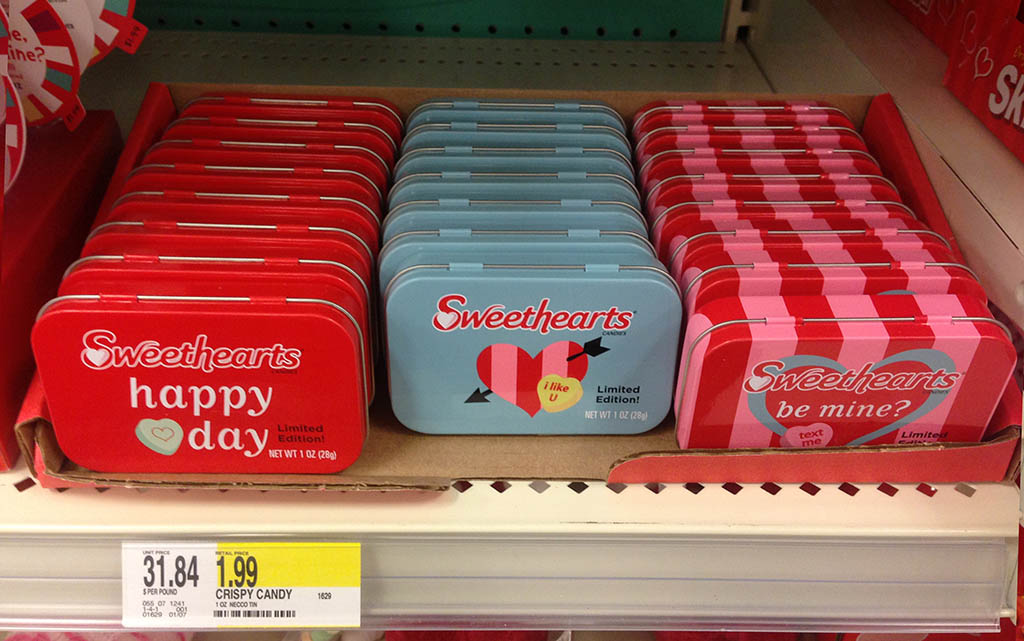 That’s everything I’ve got to share about Necco’s Sweethearts today.   As I said earlier, next year I’m going to devote a little more of my candy budget to picking up the various conversation hearts versions that are out there.   I think they’ll be a fun thing to try to collect.

I got an early start when I found this Brach’s box at my local grocery store just a few days ago: 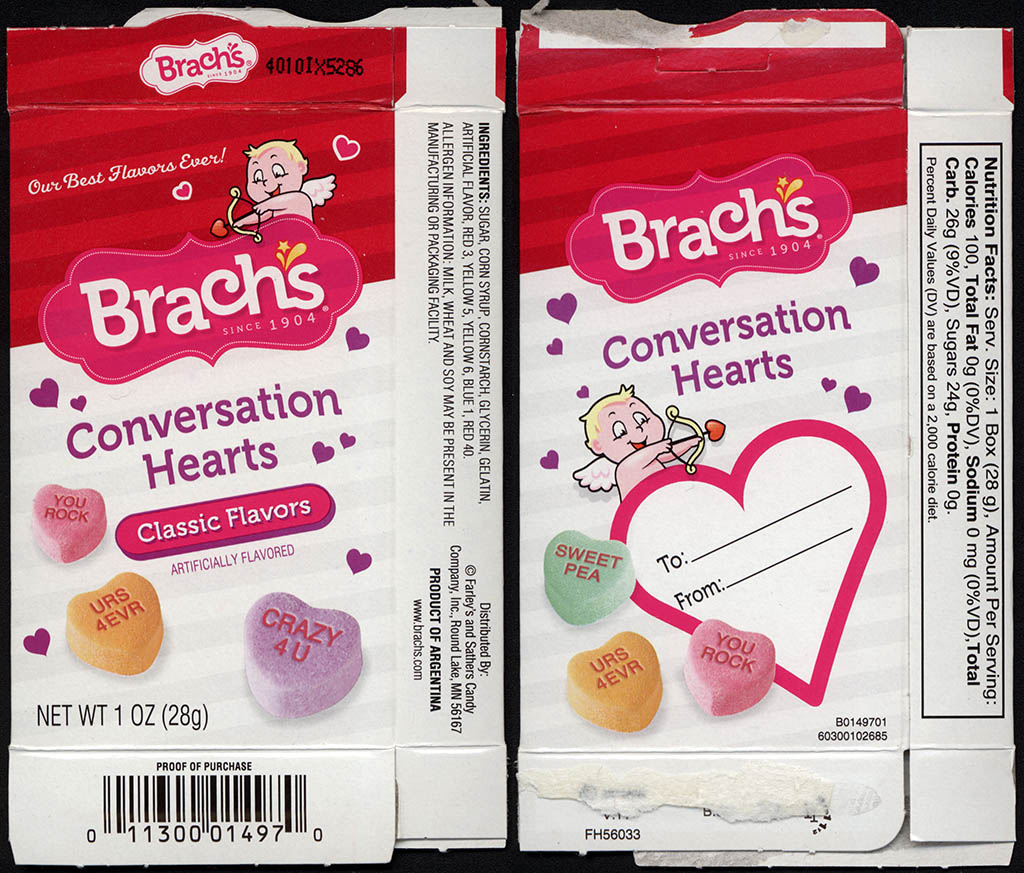 And that’s everything for today.  I’ll be back tomorrow with my last Valentine’s post for the week.

A New York City based writer, editor and sometimes actor. After spending much of the 1990′s in the comic book business helping tell the stories of Marvel Comics’ X-Men as series editor, he has since split his time between developing his own entertainment properties while still consulting and working on others. Having been described as “the Indiana Jones of lost and forgotten candy”, Jason is one of the country’s premier candy collectors and historians with his discoveries appearing in countless blogs, magazines, newspaper articles, and books. Always happy to share his knowledge and unique perspectives on this colorful part of our popular culture, Jason has consulted with New York’s Museum of Food and Drink and has also been a featured guest on Food Network’s Heavyweights, France’s M6 Capital, and New York’s TheActionRoom.com. My Google Profile+
View all posts by Jason Liebig →
This entry was posted in 1970's, 1980's, Boxed, Holiday, Uncategorized and tagged candy collecting, candy collection, candy collector, candy wrapper collection, candy wrapper collector, collectible, collecting candy, confectionery, confections, conversation hearts, holiday candy, Necco, packaging, Sweethearts, sweets, Valentine candy, Valentine's Day, vintage candy wrapper, wrapper. Bookmark the permalink.