Boyer – From Mallo Cup to Fluffernutter and Everything In-Between! 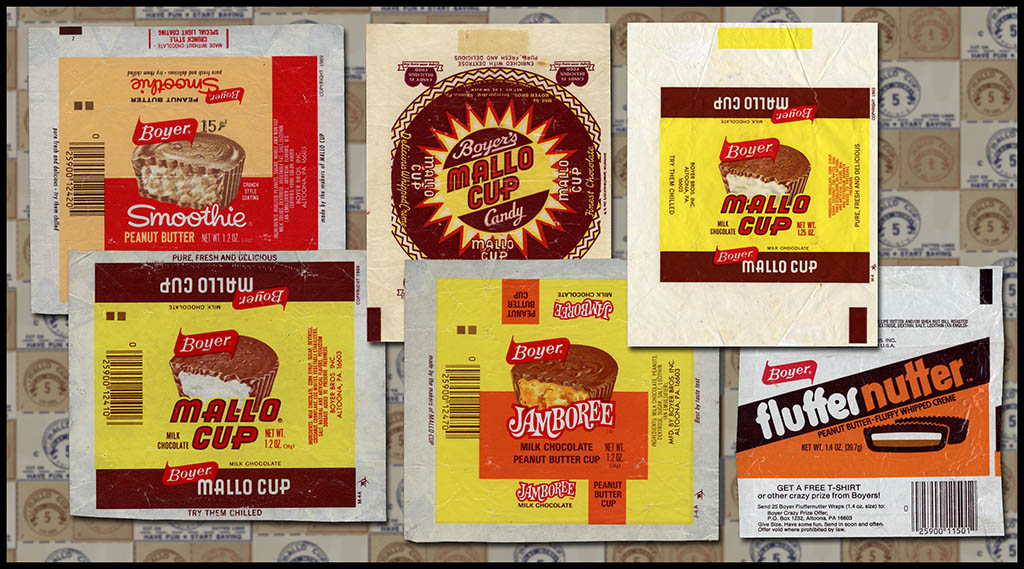 For today’s post, I’m going to share my collection of vintage wrappers from Boyer, a company best-known for their classic Mallo Cup.  I’ve got a great range of historical Mallo Cup wrappers to show you as well as a few wrappers for some cool, rarely-seen Boyer treats that you won’t find anywhere else!

The Boyer Brothers company first began major production and distribution in 1936, though they were known to have had a door-to-door operation for some years before that.   The Boyer company was a confectionery trailblazer as they can lay claim to being the first company to produce a cup candy here in the United States, even beating such well-known treats as Reese’s Peanut Butter Cup.  Over the decades the Boyer company became most identified with and for their much-loved Mallo Cup, which they’re still producing today.

Though Mallo Cup wrappers have had a pretty consistent look for the last several decades, my oldest Mallo Cup wrapper reveals a wonderful graphic flare that is hardly recognizable for the brand.  It is notable, however, that the central “Mallo Cup” logo type style has remained consistent for over half-a-century:

It’s hard not to love the mid-century styling and sunburst logo of that one.  Another one I have that comes from way back is this wrapper for a Boyer’s Peanut Butter Mallo Cup: 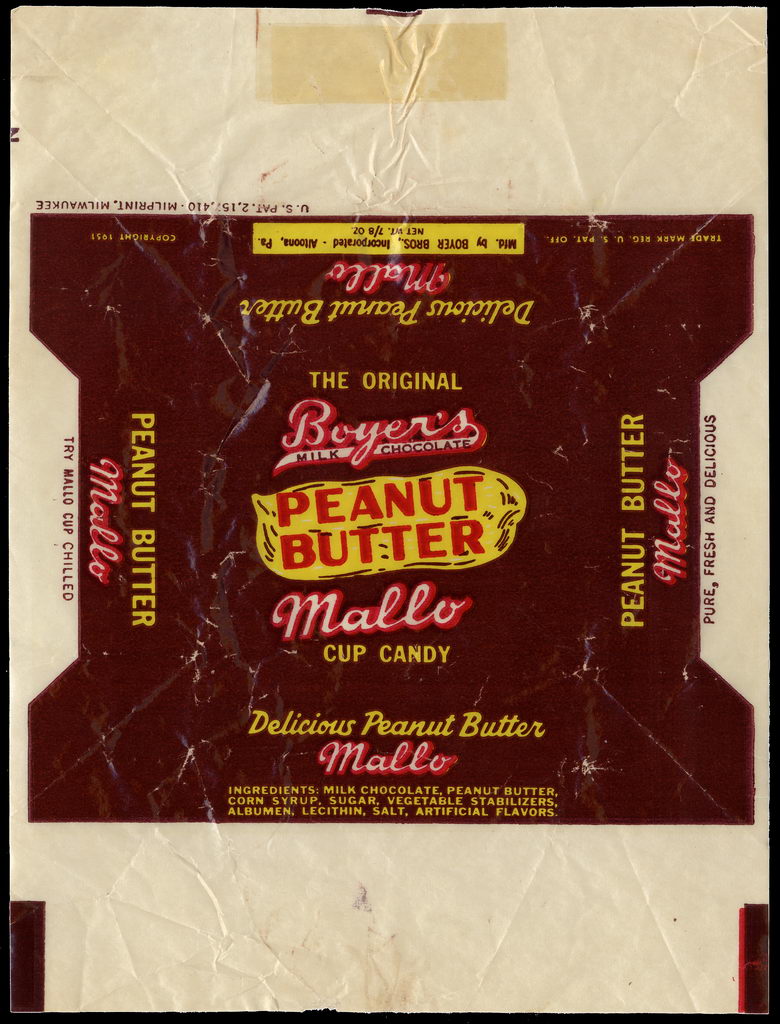 Sticking with the 1950’s, I have a flavor of Boyer’s candy cup that I’ve only ever found once – it’s for a Cup-O-Cocoanut:

Though I don’t have any Boyer’s wrappers that are confirmed from the early 1960’s, I do have this period trade announcement regarding Boyer Smoothies: 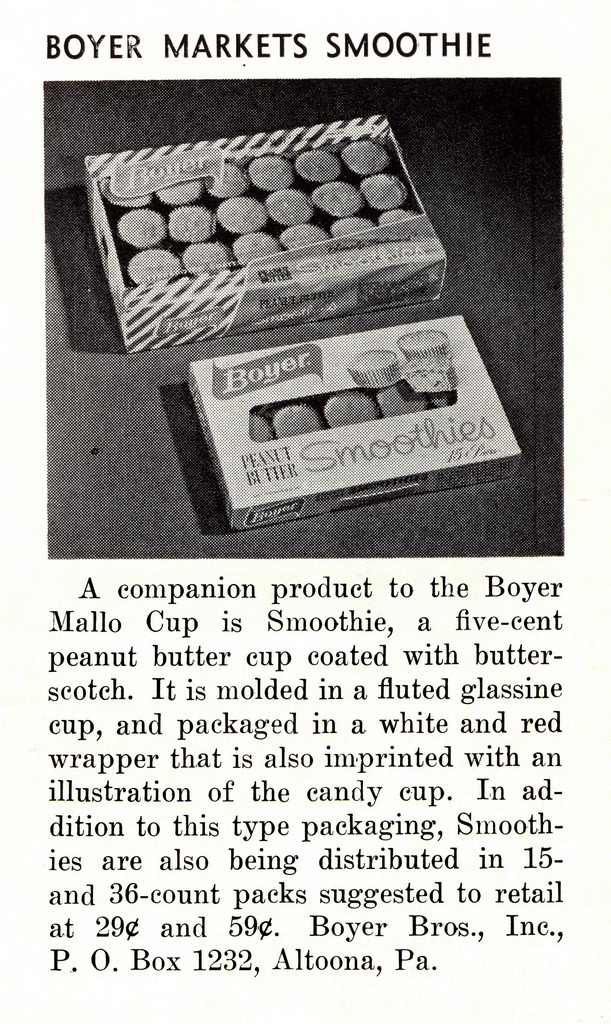 The Boyer Brothers would sell their company in 1969 to American Maize, where it would remain until 1984, when it would be sold to Anthony Forgione and once again become a family-owned company.

I’m fortunate to have a great number of Boyer wrappers from the late 1960’s through the early 1980’s, the American Maize period of the company.   I will endeavor to present them in chronological order.  These first few have late 60’s copyrights, though they all came from a 1970’s collection so are a bit later than their copyrights might indicate: 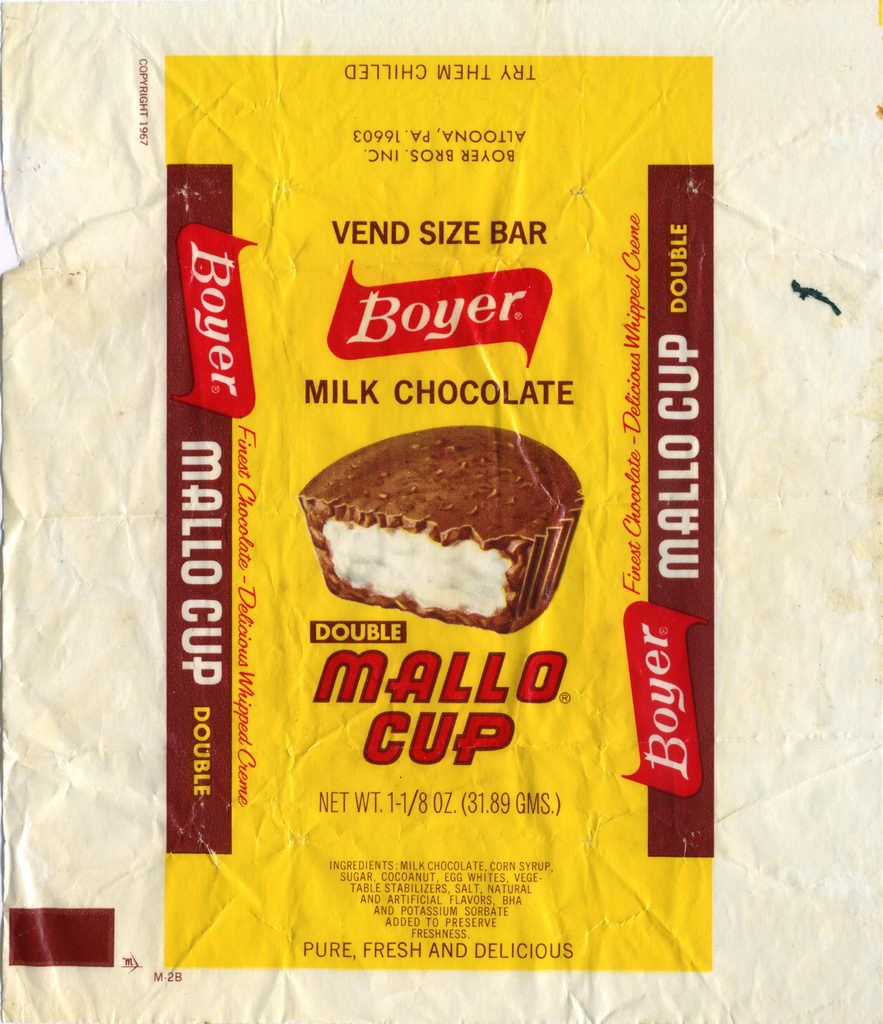 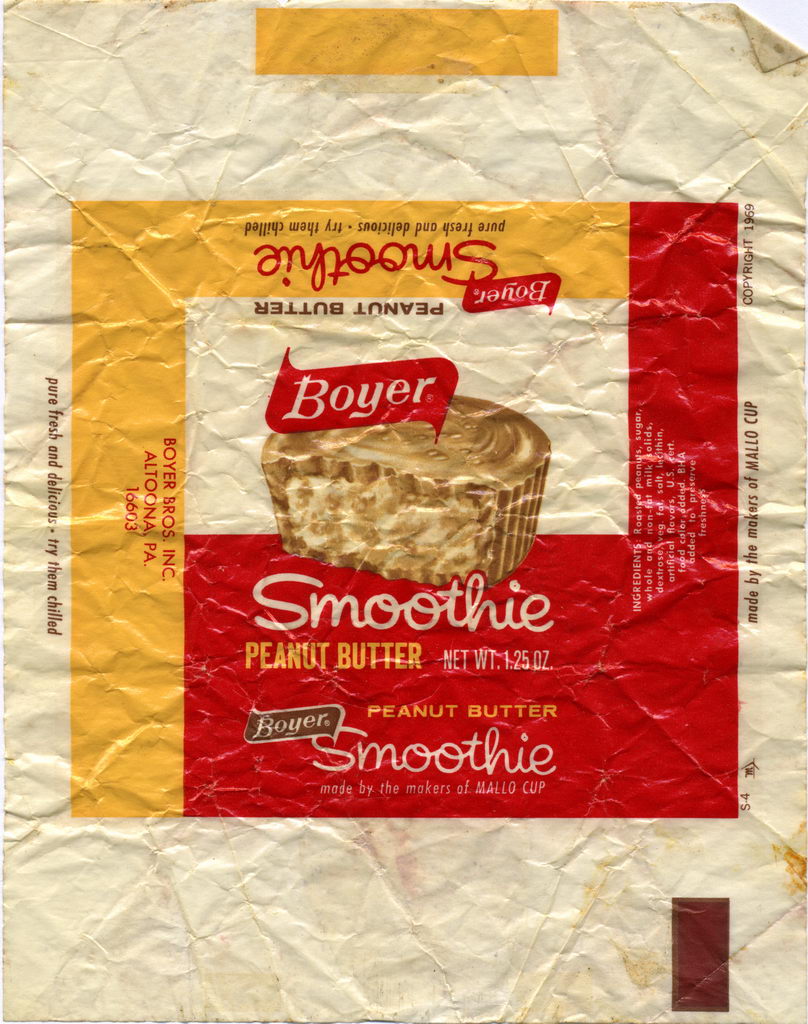 Eventually, bar codes would be added to the wrappers, which would typically place them after 1974 or 1975, though these next few still sport copyrights of 1969.  These are  differentiated from the earlier wrappers solely by the addition of the bar code: 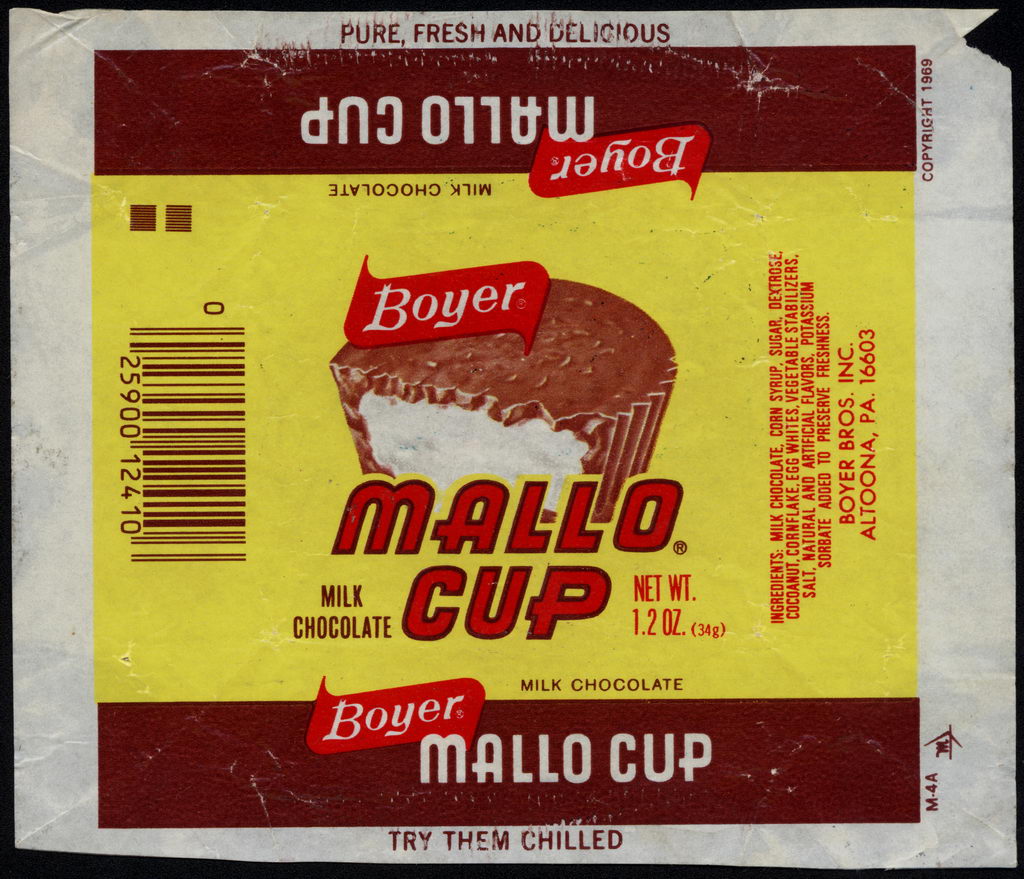 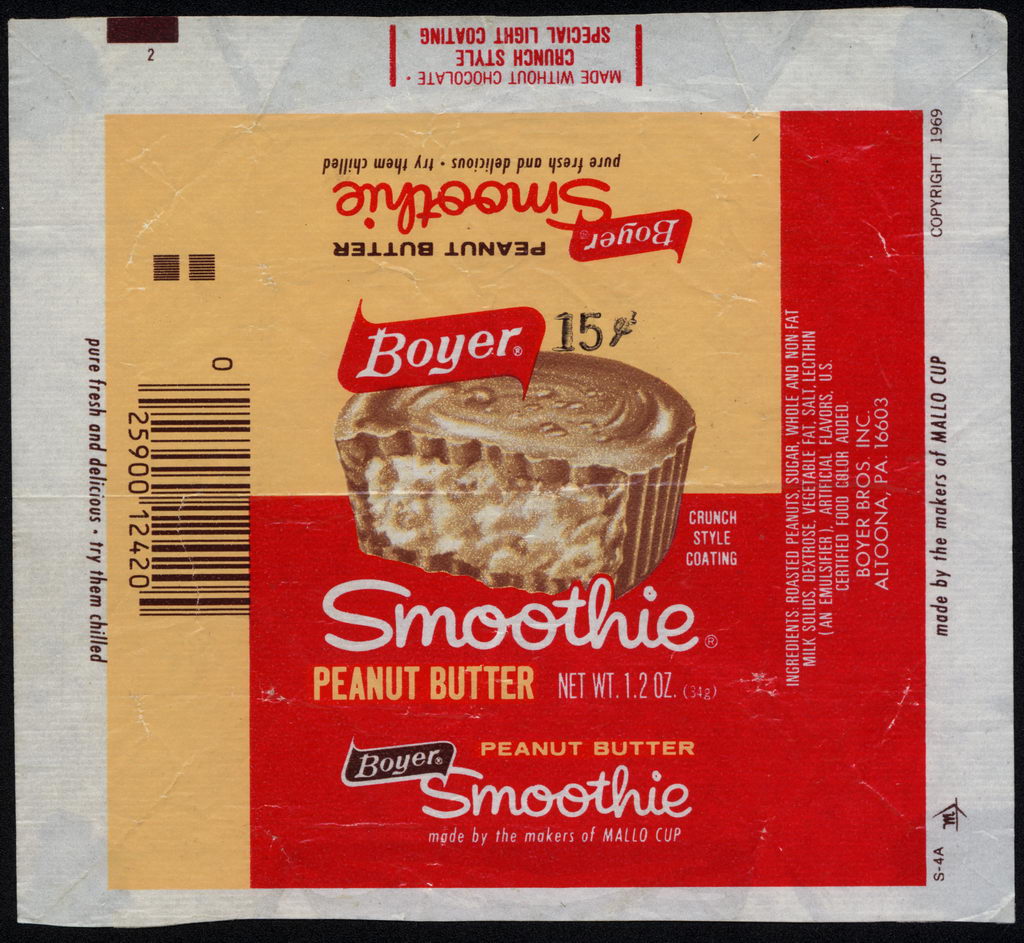 The next fascinating piece of Boyer packaging intrigue is that during the mid-1970’s the Boyer Peanut Butter Cup appears to have been re-branded as Boyer’s Jamboree.  When I first came upon a Boyer Jamboree wrapper I had assumed it was a different product but after laying out all of the information I’d gathered, it appears to have merely been a fanciful name change: 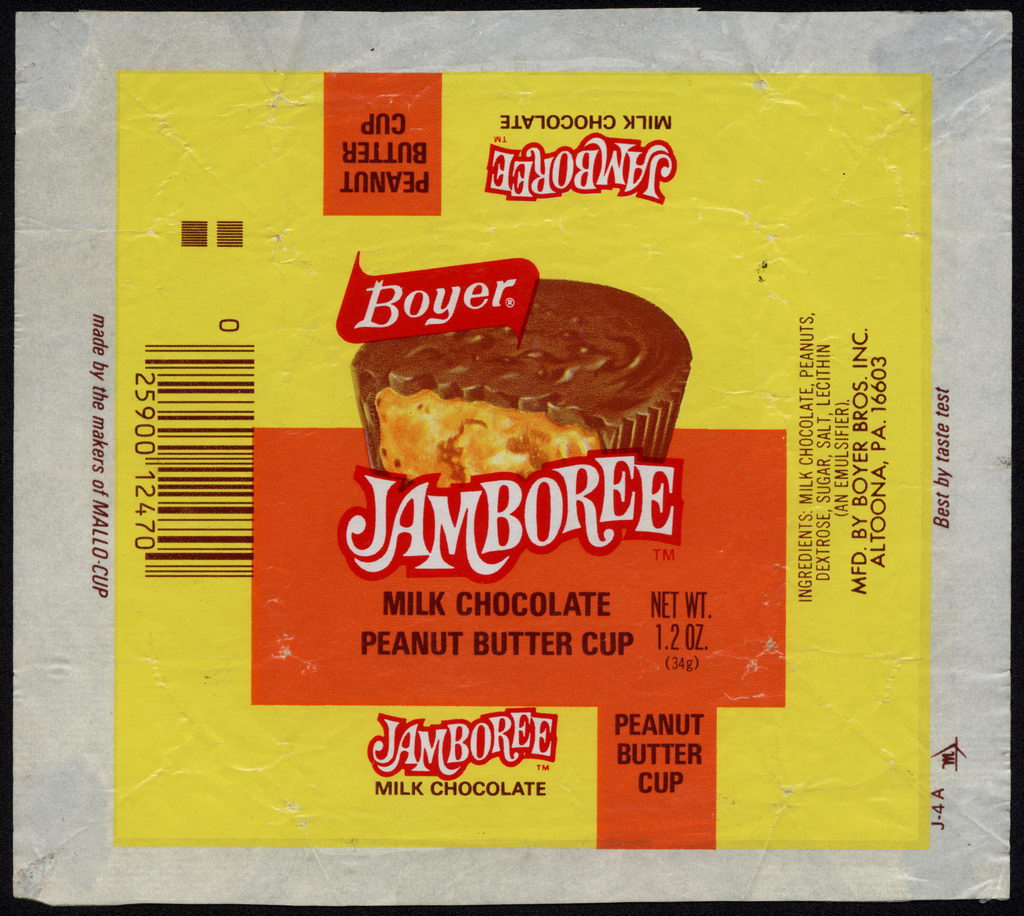 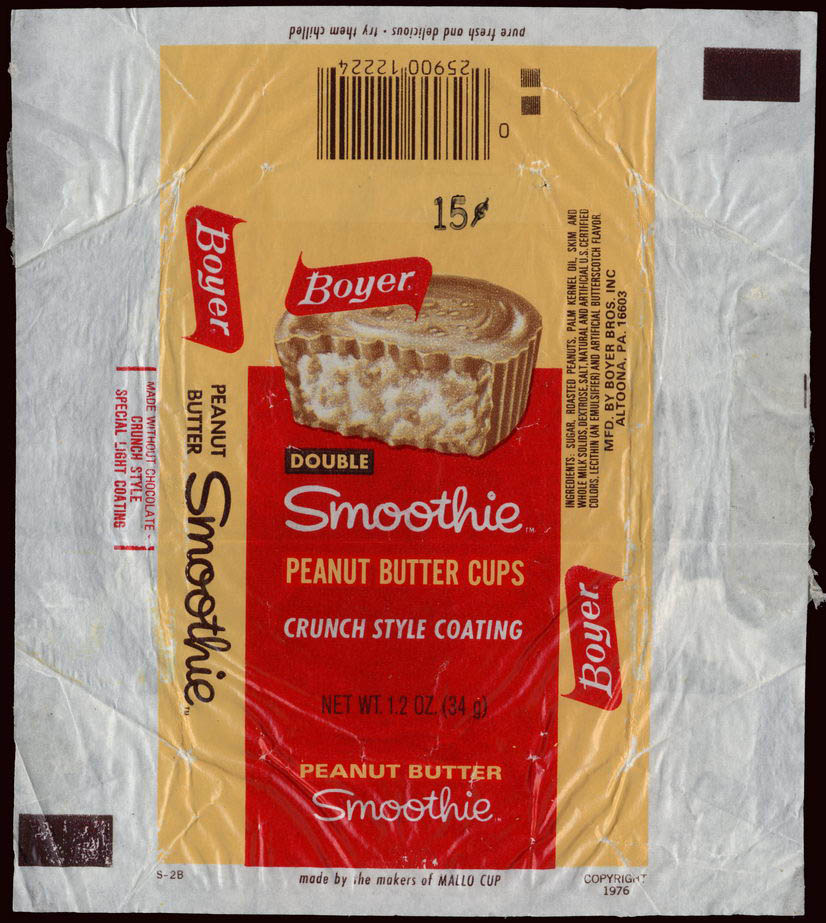 In late 1977, the Boyer lineup received a major packaging refresh which provided the wrappers with a slick, modern (for 1977) look. 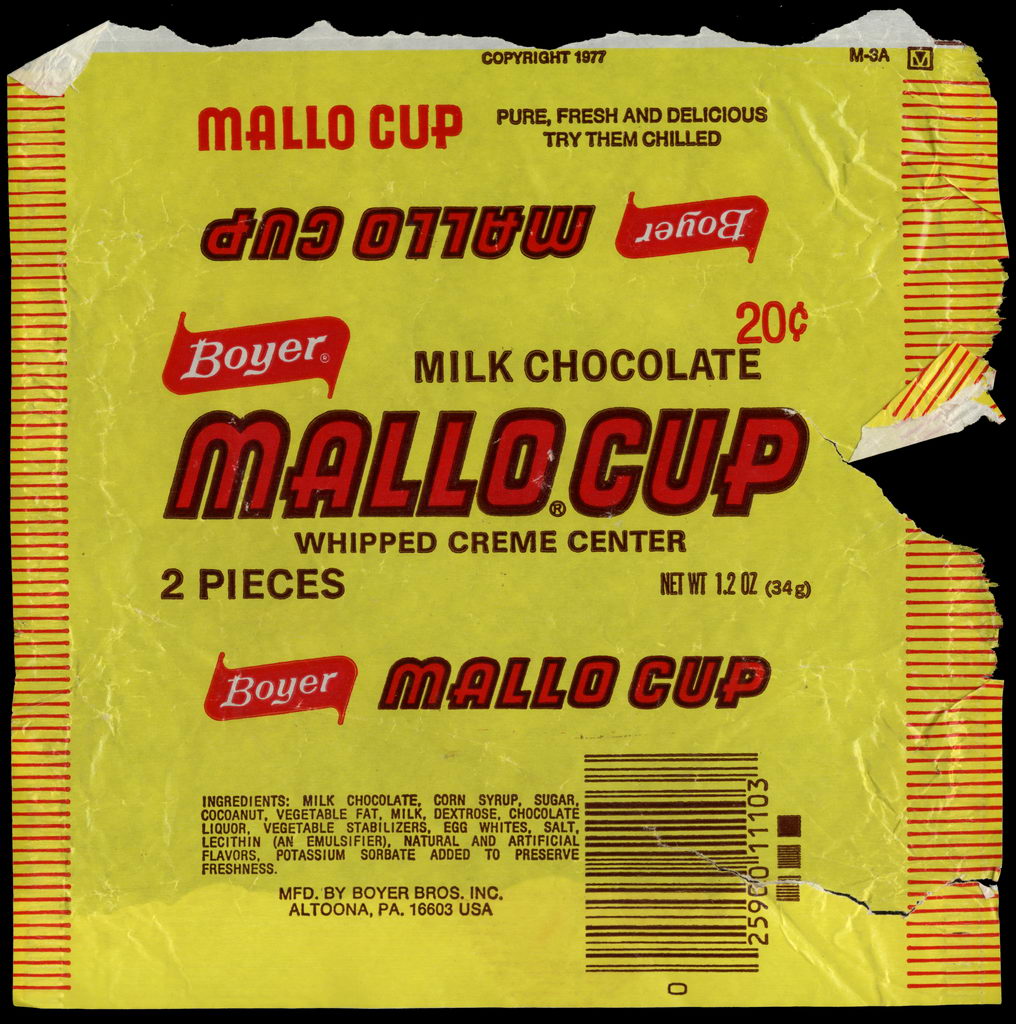 The simplified look of the wrappers would continue for the next year: 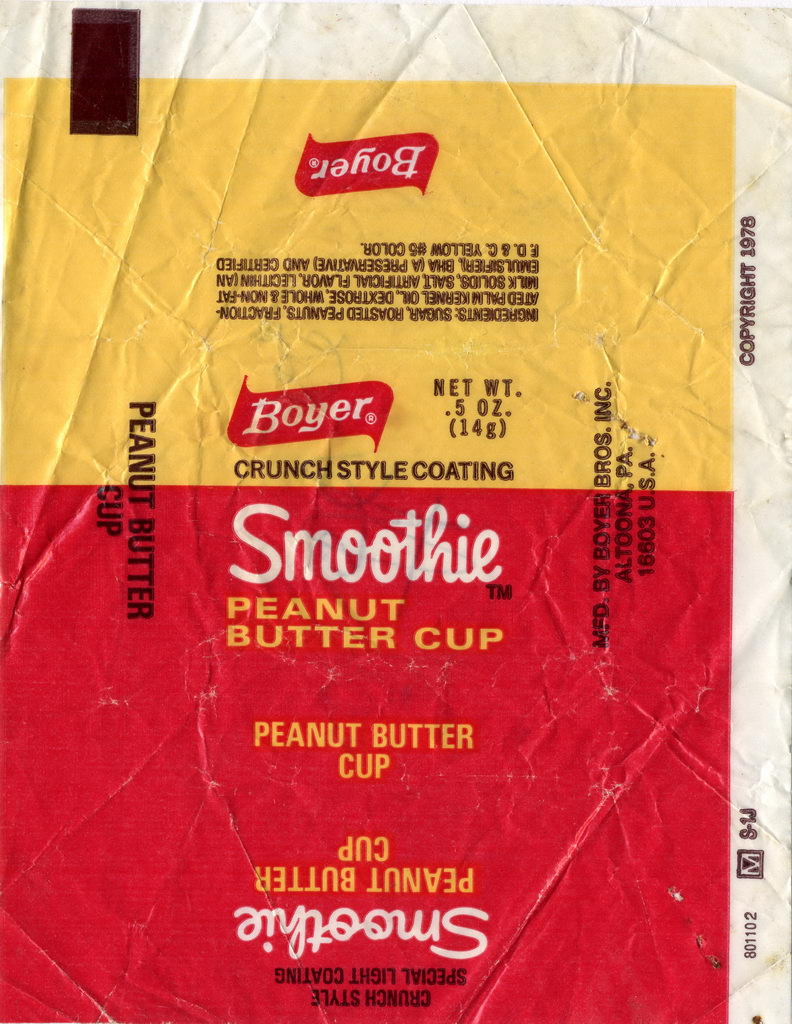 Here are a trio of Mallo Cup wrappers from this period, each showing slight variations: 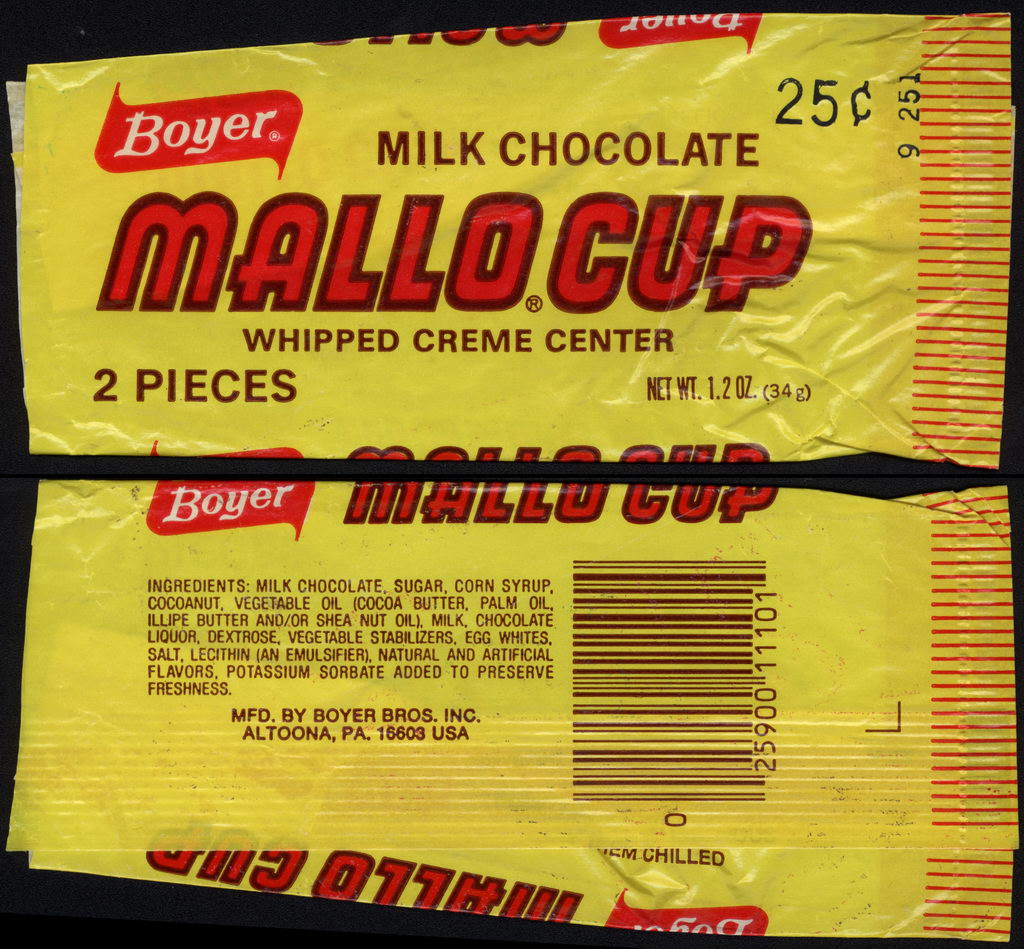 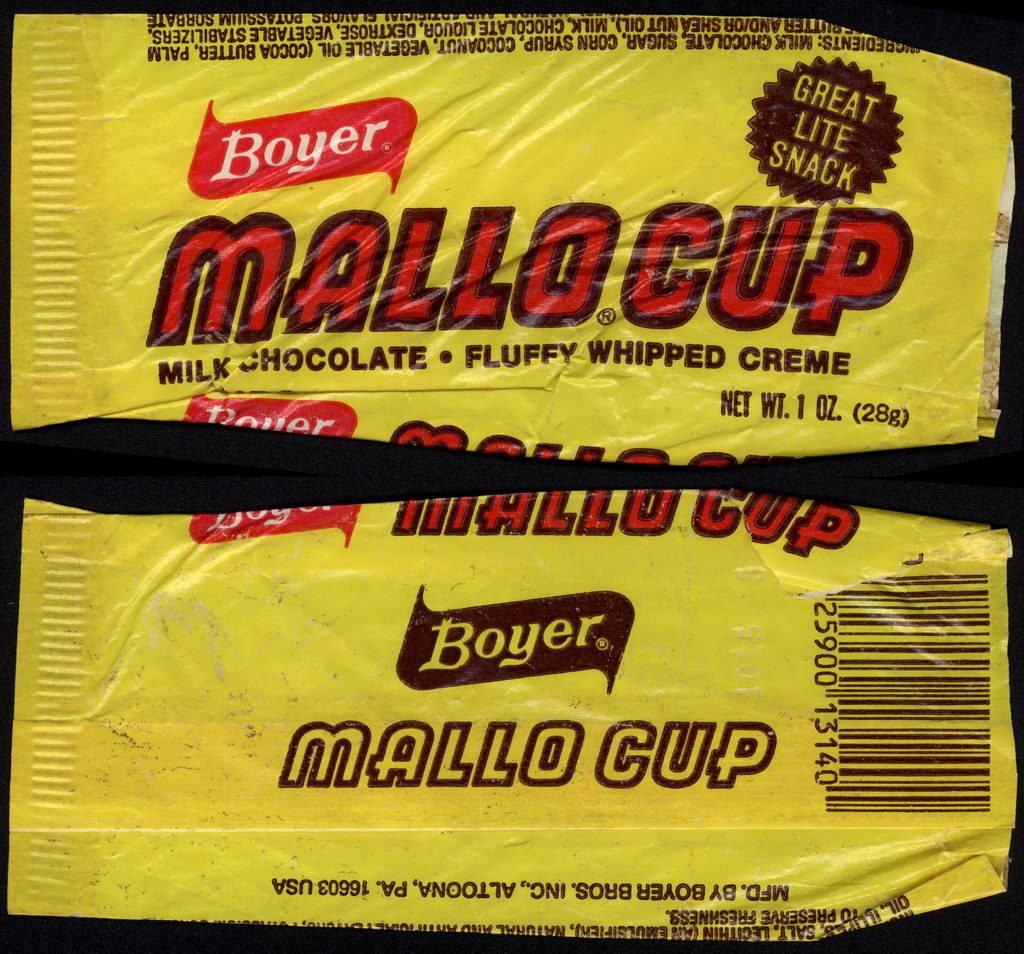 1978 would also see the confirmed retirement of the Jamboree name, with the return of Boyer’s Peanut Butter Cup. 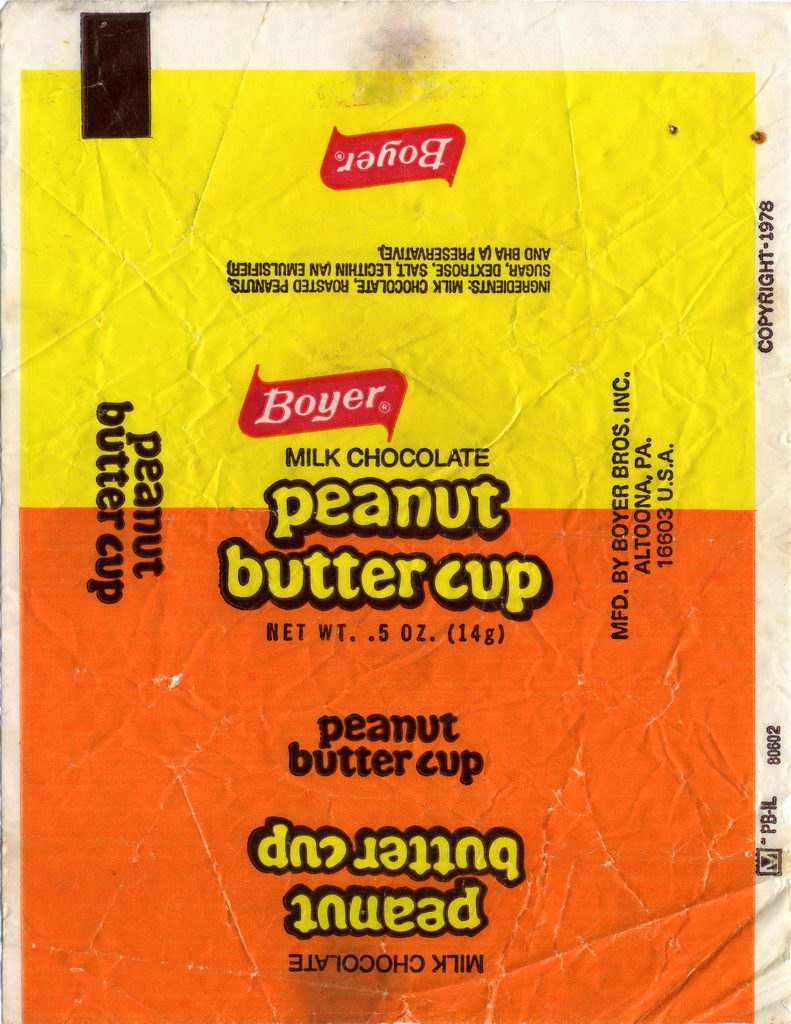 I’ve got a pair of Boyer Peanut Butter Cup wrappers from 1979 that are almost identical, yet one sports a detailed nutritional information listing on the label while the other does not.  I can’t be sure, but I’ll speculate that certain states required the additional information, and that accounts for the change.  Another possibility is that one was a vending version and so the vend trade required the additional info to be included. 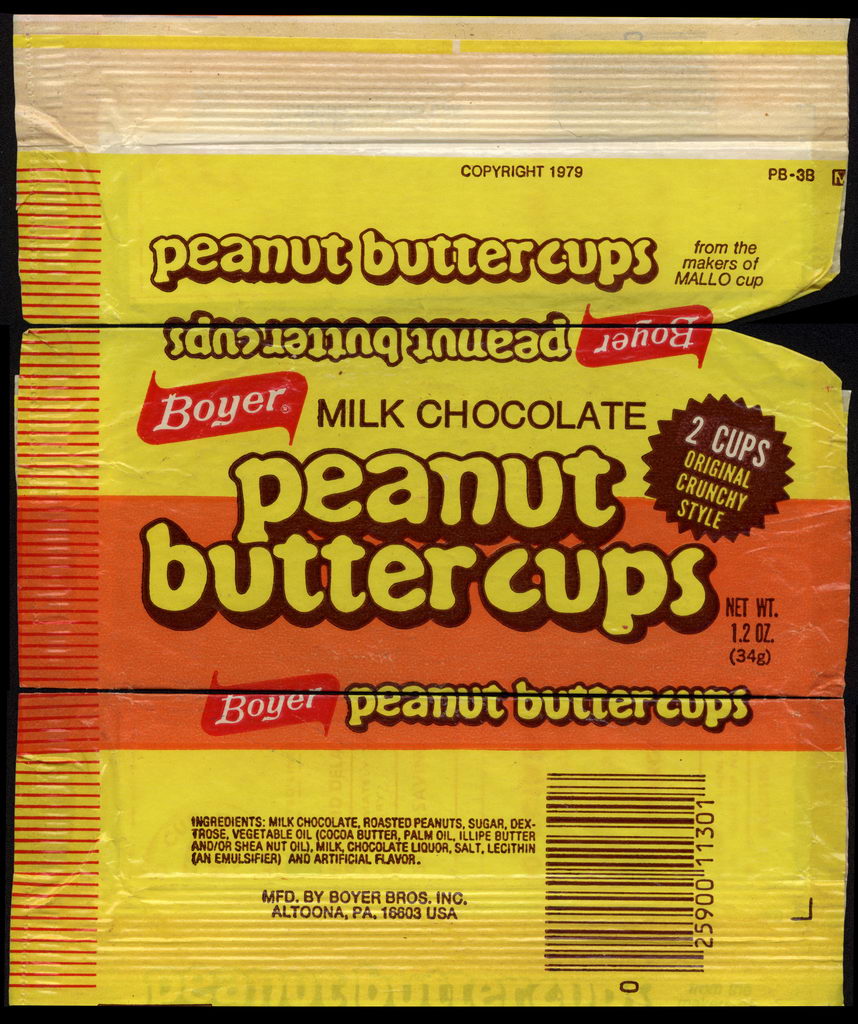 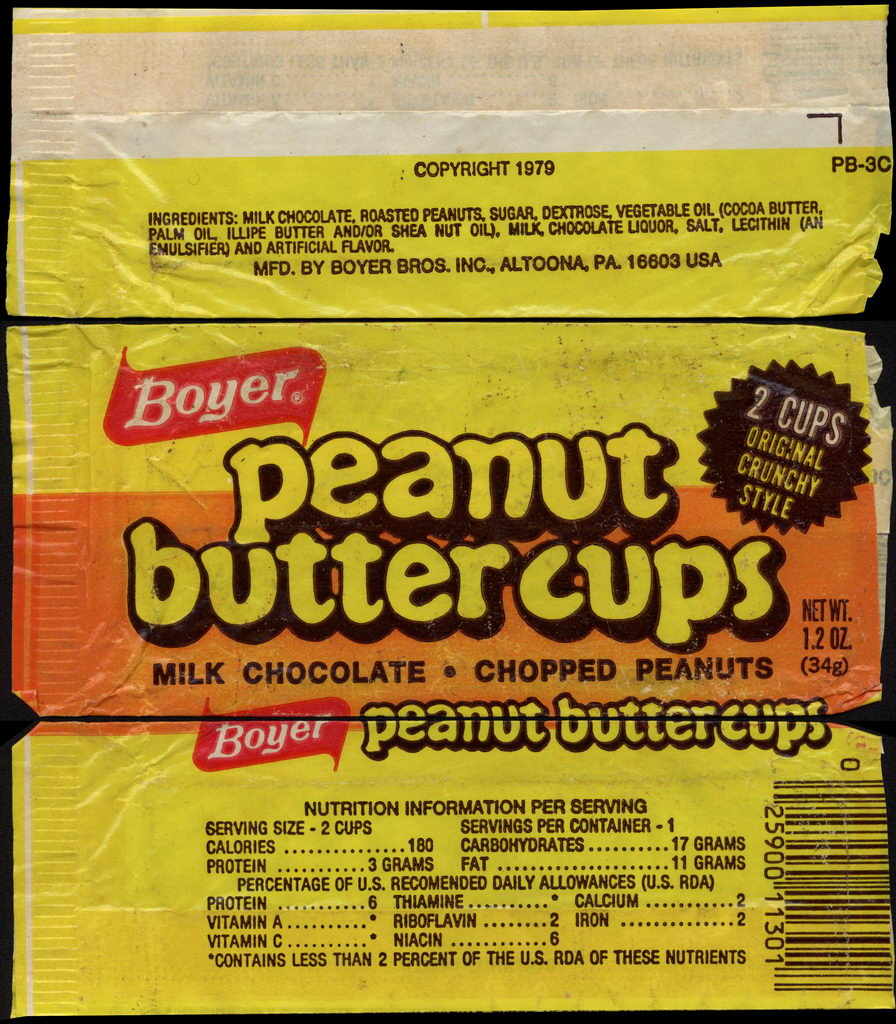 1980 would appear to have been another period of modest packaging design evolution for the Boyer product lineup, as the logos would move an ascending diagonal orientation.  Boyer would also begin to offer 3-packs during this time: 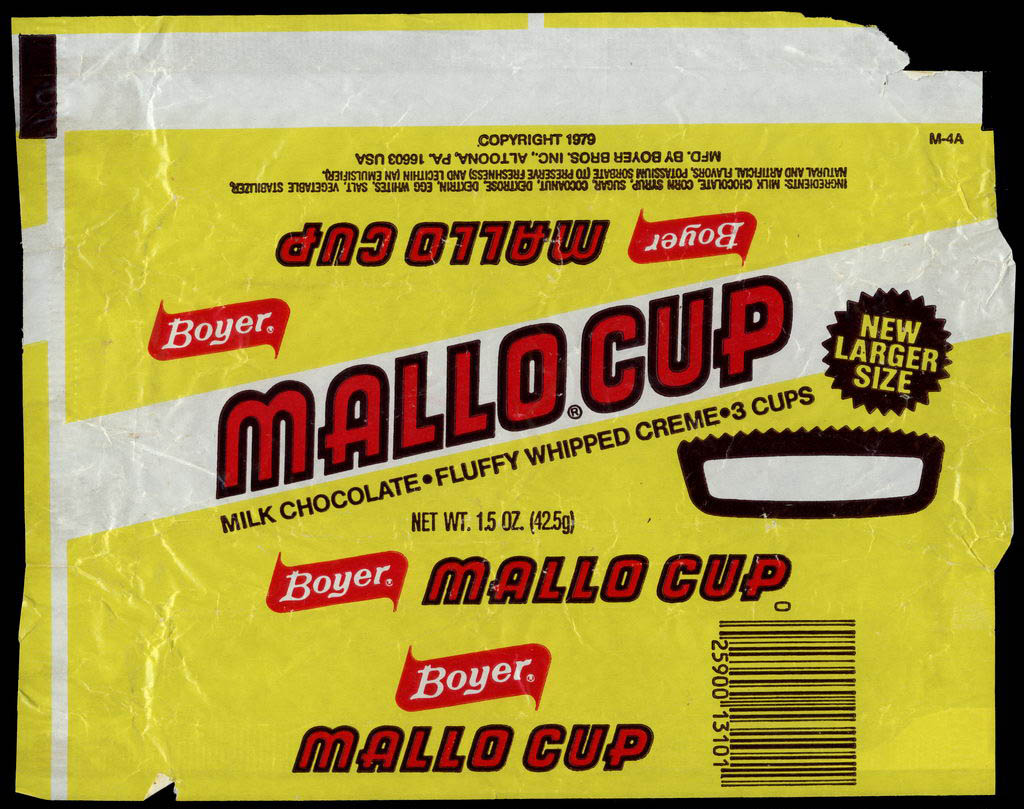 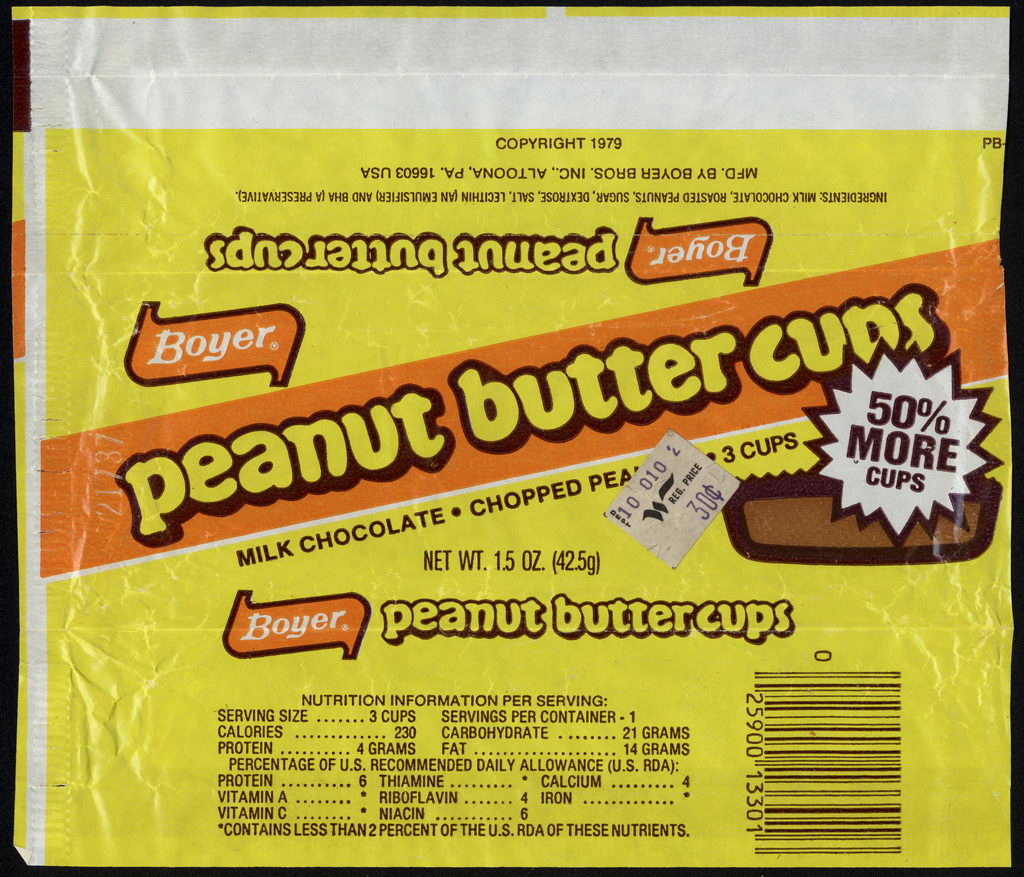 The early 80’s represented a period of experimentation for Boyer, as they expanded their lineup with a number of unusual flavors within the span of a few years.   I’m a huge fan of unusual flavor extensions of standard brands, so I’m especially excited to share these next few wrappers with you.  You won’t find images of these wrappers anywhere else online, so these are all CollectingCandy.com exclusives – and here they are: 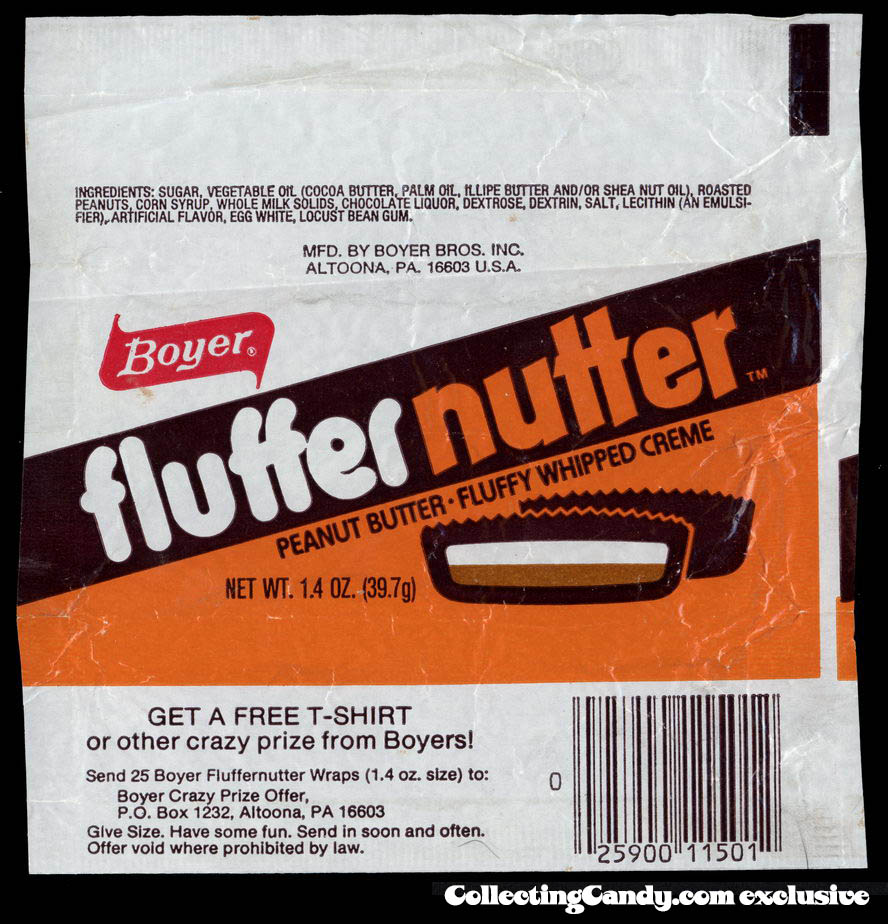 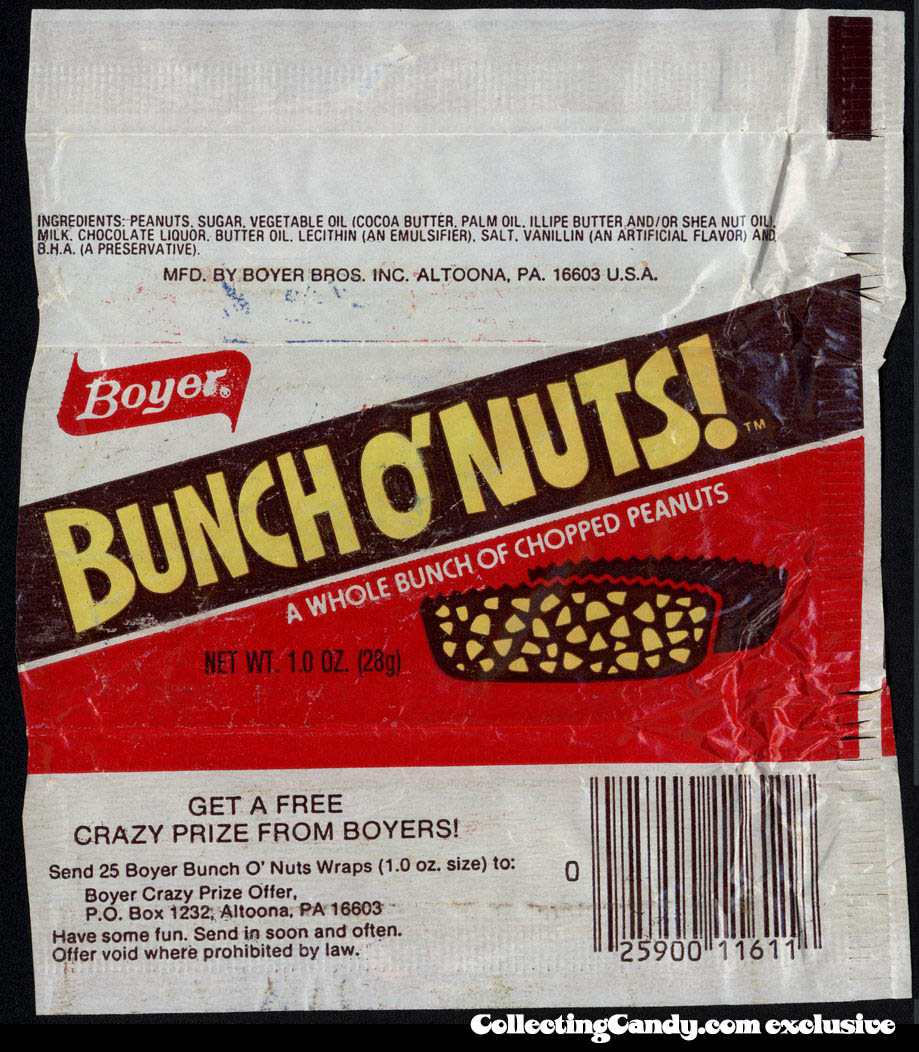 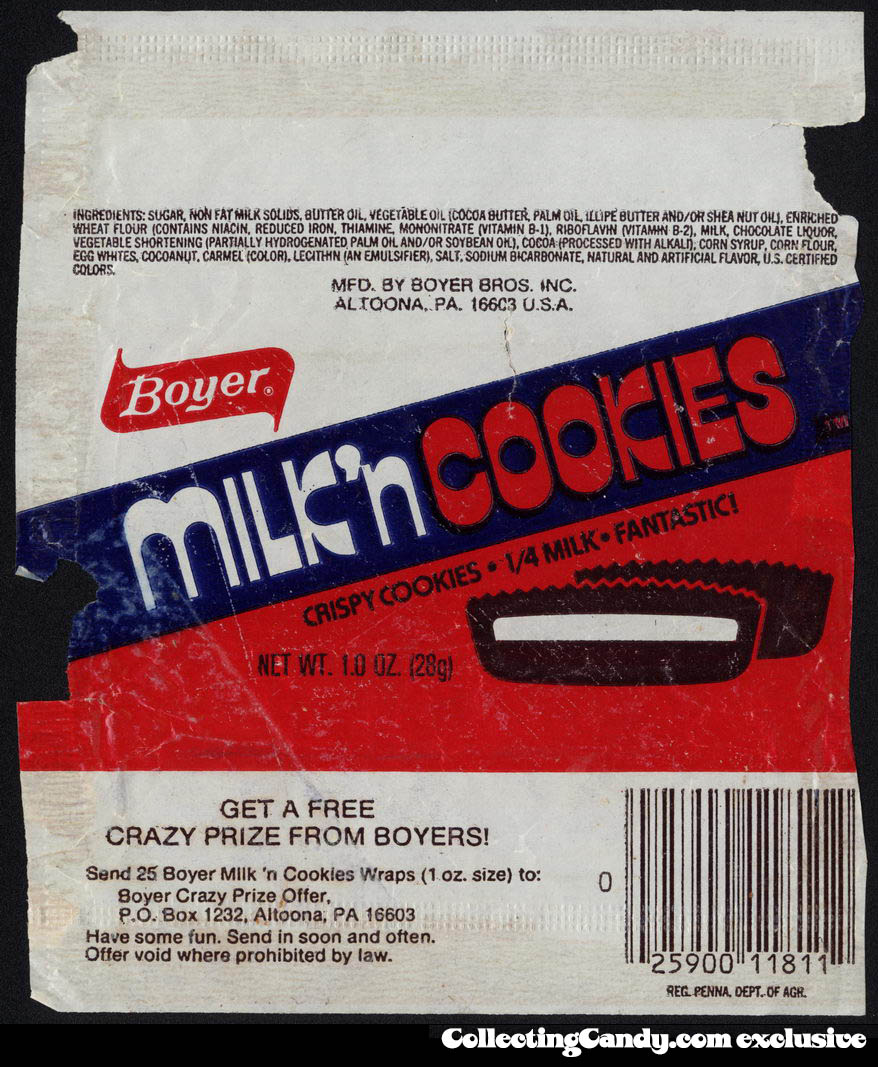 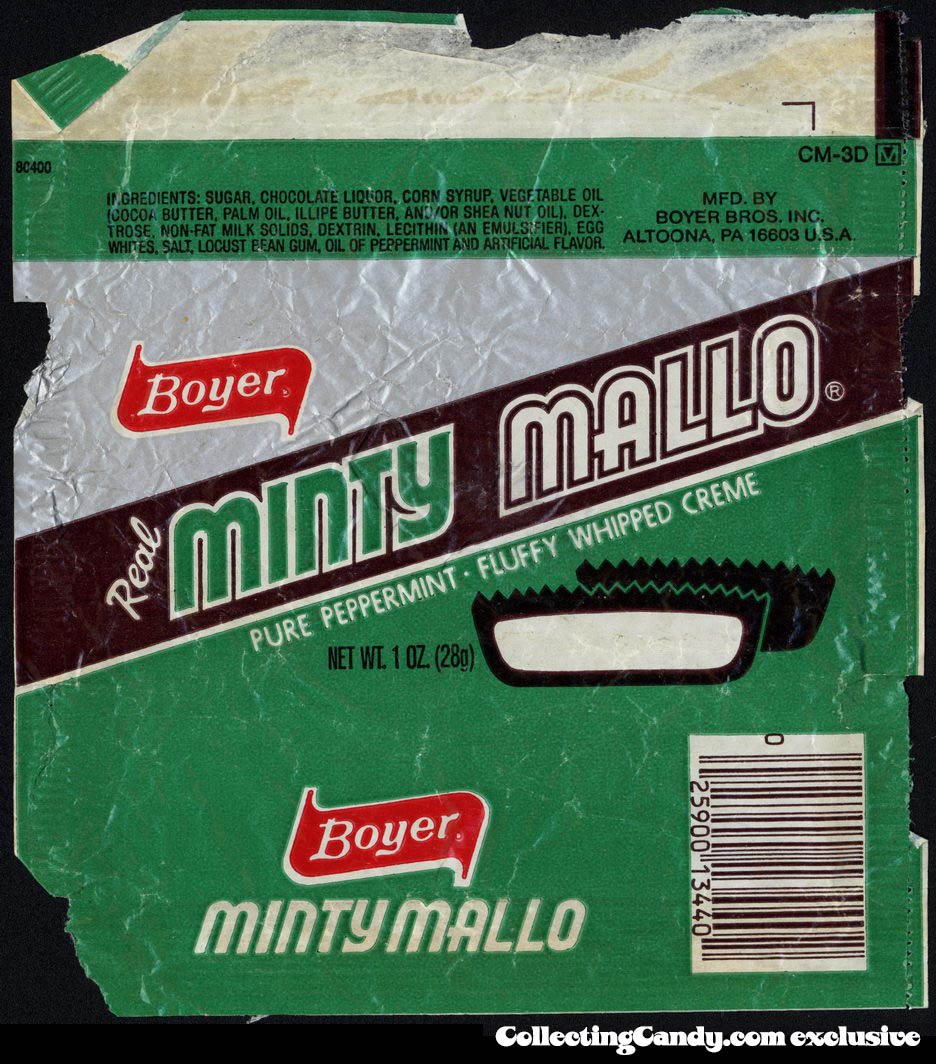 Don’t you just want to try a Boyer Fluffernutter or S’mores?  I know I do!

From this point on, I don’t have any more vintage examples of the main Boyer cup lineup.  So I can’t show you for certain what the Boyer lineup looked like during the later 80’s and through the 1990’s.  I suspect they kept things pretty consistent, though.

Even though I’m missing a big period of years, I’m not done with today’s entry as I do have a few more things to show you.

First up is a mid-70’s non-cup candy – at least I don’t believe this was a cup candy – it appears to be something like a York Peppermint Pattie: 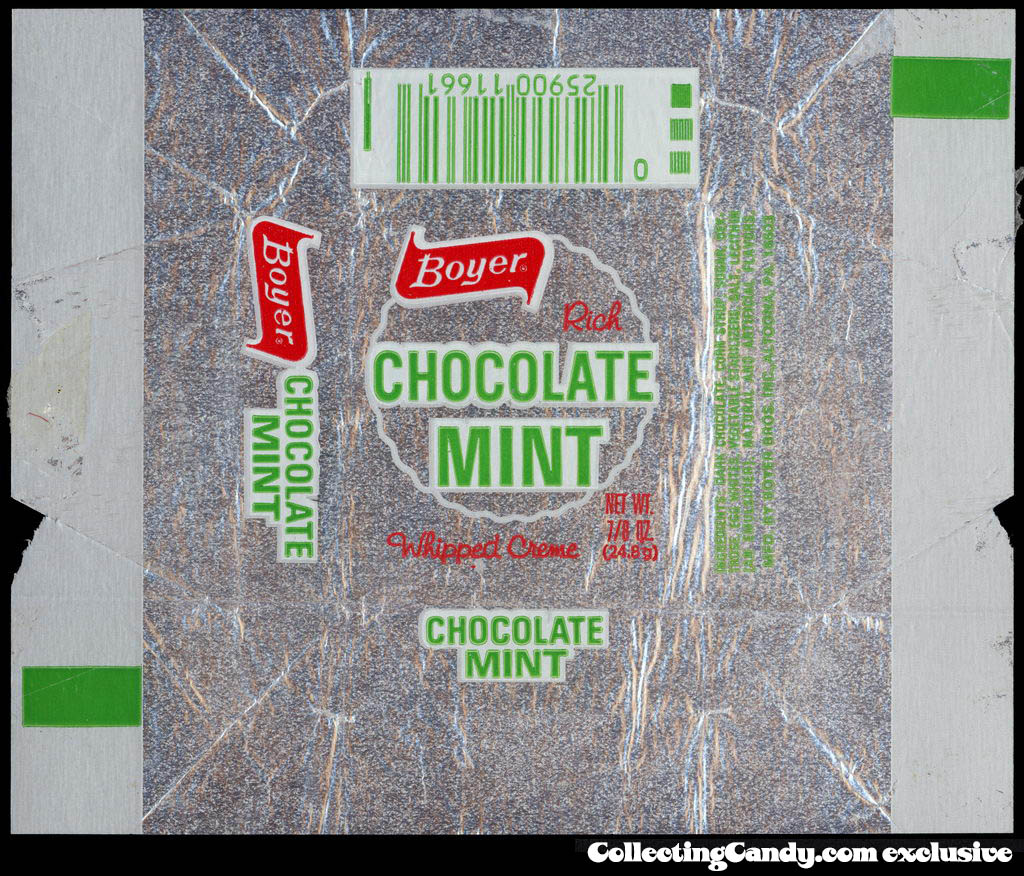 And of course what piece on Boyer would be complete without a mention of “Mallo Cup Money”.  Here are a sampling of vintage Mallo Cup money inserts that I’ve got in my collection: 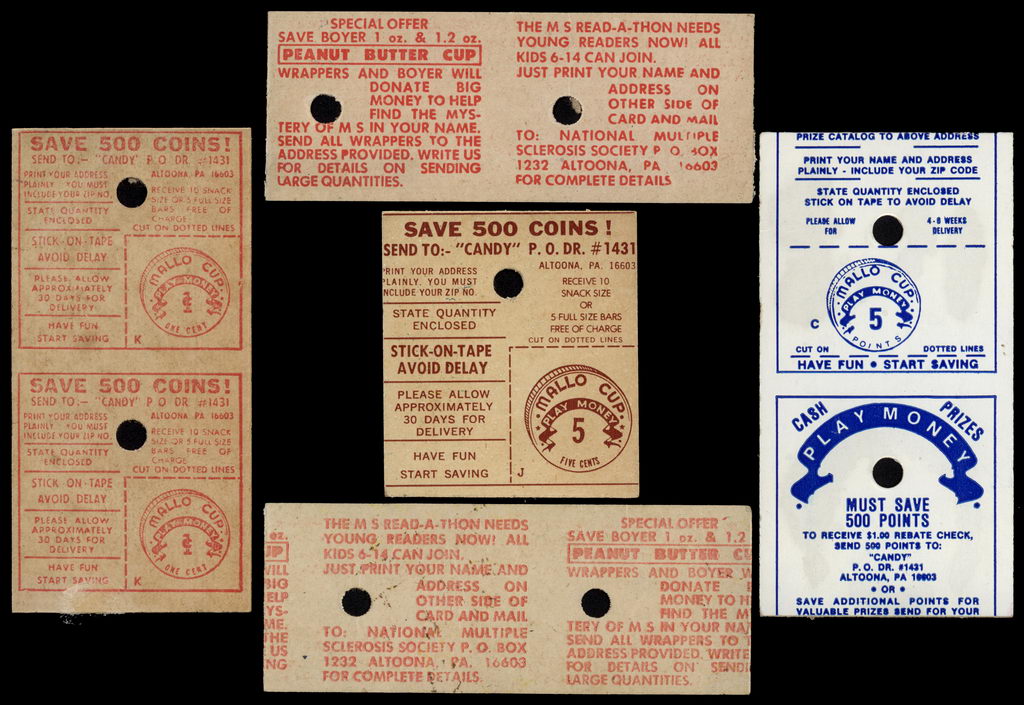 And here’s something you won’t see very often – it’s a pair of vintage cup inner wrappers.  I suspect these are identical to what you’d find now, but since I have them I thought they should be included: 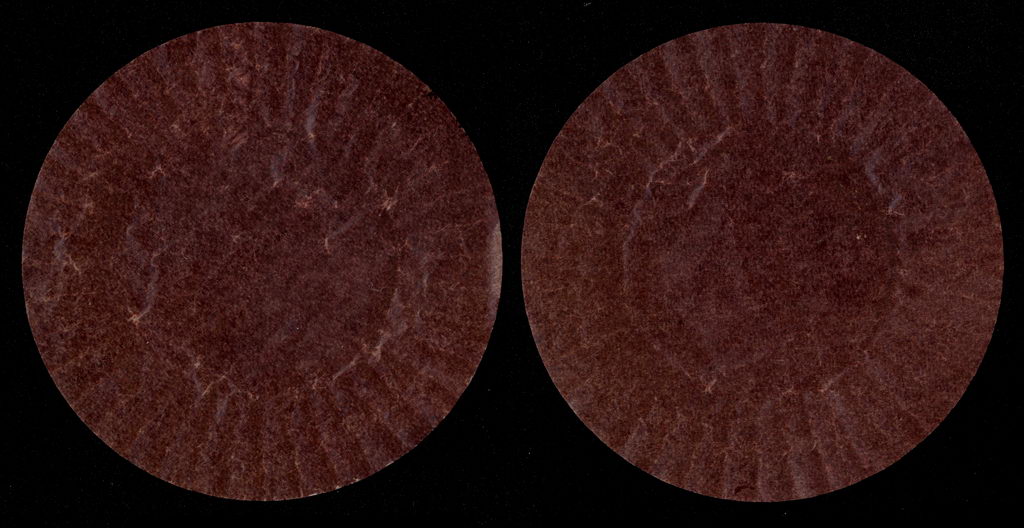 This brings us up to the contemporary, and here I have a trio of recent Boyer wrappers to show.  First up, the classic Mallo Cup: 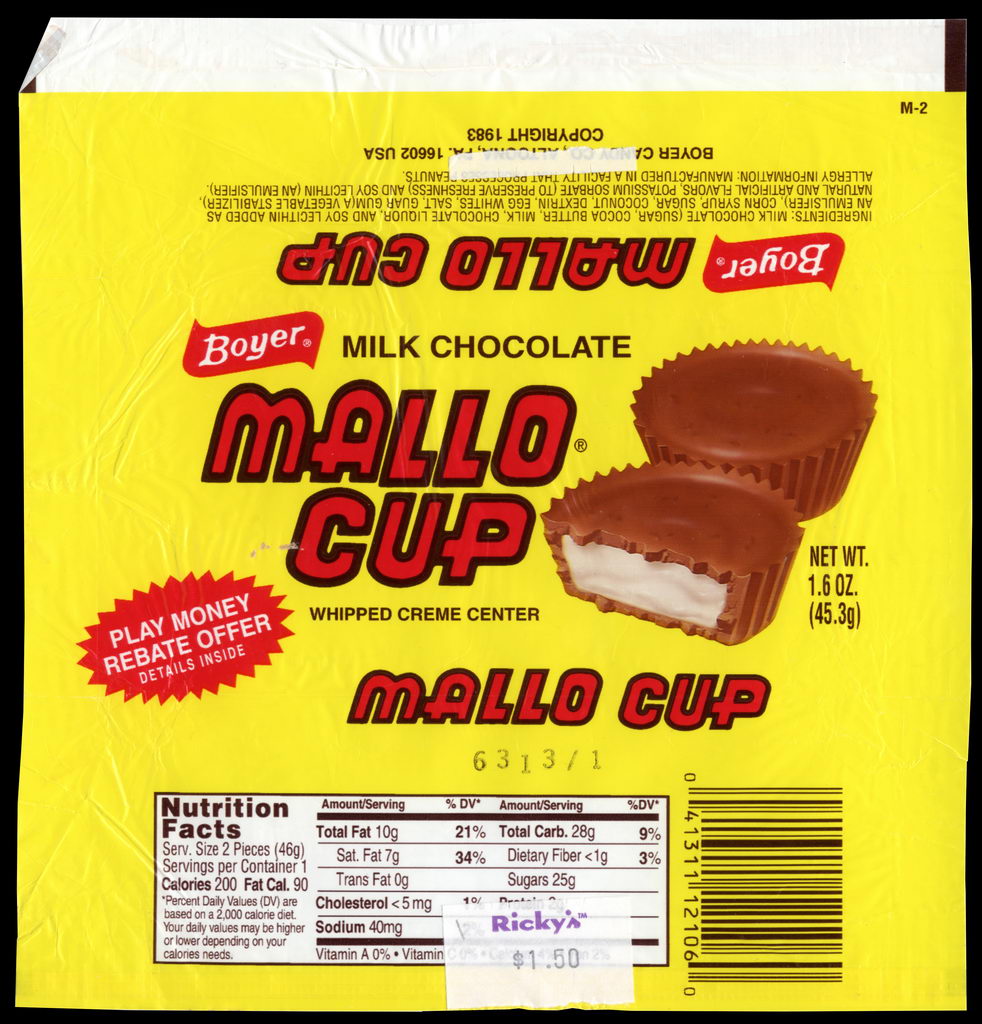 As you can see, the Mallo Cup wrapper of today evokes quite a bit of the old-school look, and that’s probably a good idea as Mallo Cups seem to be marketed these days mostly as a “retro” or nostalgia candy product, which is getting to be a pretty big market segment!

Next up is Boyer’s Peanut Butter Cup.  I like this one a lot as the wrapper features one of Boyer’s modern mascots, Patty Peanut Butter Cup [Editor’s note: I just learned that this mascot wrapper may have already been retired and replaced with a more graphic retro-inspired wrapper.  I don’t have one to show today, but I’m hunting.]:

And finally the modern Smoothie wrapper which, like the modern Mallo Cup, retains a much more old-school look about it: 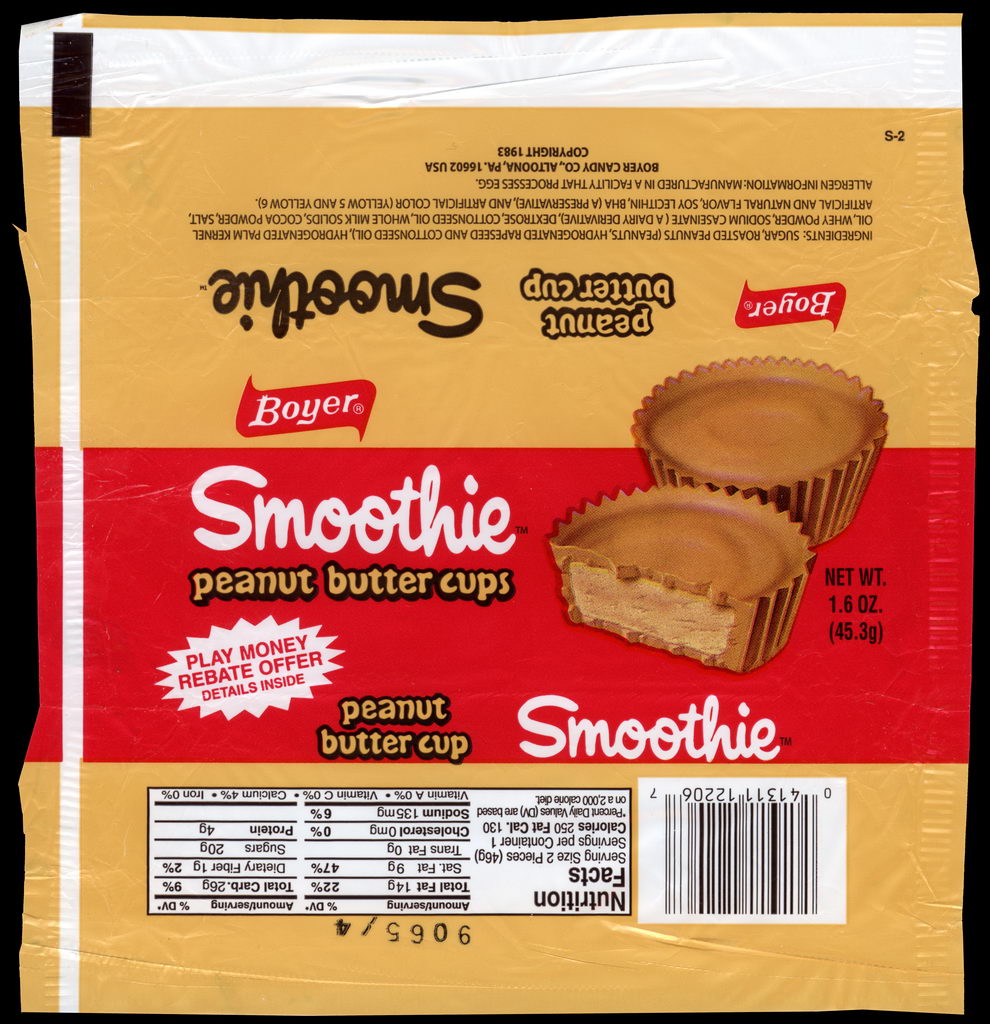 While researching today’s post, I found that Boyer has released a Dark Chocolate Mallo Cup, though I’ve yet to find one, so I don’t have a wrapper to show.  I also noticed that, on their display boxes at least, Boyer has neat dedicated mascots not only for their Peanut Butter Cups, but also Mallo Cups and Smoothies.

From the Boyer official site, here they are:

And that is everything I have on today’s topic.  I hope you’ve enjoyed this look back at the history and packaging of one of America’s beloved family-owned confectionery institutions – Boyer!

A New York City based writer, editor and sometimes actor. After spending much of the 1990′s in the comic book business helping tell the stories of Marvel Comics’ X-Men as series editor, he has since split his time between developing his own entertainment properties while still consulting and working on others. Having been described as “the Indiana Jones of lost and forgotten candy”, Jason is one of the country’s premier candy collectors and historians with his discoveries appearing in countless blogs, magazines, newspaper articles, and books. Always happy to share his knowledge and unique perspectives on this colorful part of our popular culture, Jason has consulted with New York’s Museum of Food and Drink and has also been a featured guest on Food Network’s Heavyweights, France’s M6 Capital, and New York’s TheActionRoom.com. My Google Profile+
View all posts by Jason Liebig →
This entry was posted in 1950's, 1960's, 1970's, 1980's, Chocolate, Peanut Butter and tagged Boyer, Boyer's, candy collecting, candy collection, candy collector, candy wrapper collection, candy wrapper collector, collectible, collecting candy, confectionery, confections, marshmallow, nostalgia, packaging, Pennsylvania, retro, sweets, vintage candy wrapper, wrapper. Bookmark the permalink.

5 Responses to Boyer – From Mallo Cup to Fluffernutter and Everything In-Between!