Back in March of last year, I wrote about Rowntree UK’s nostalgic 70’s favorite, the Texan bar.  What I didn’t know at the time was that around that same period in Rowntree’s history, their South African branch produced a different bar, but with a similar name and thematic, the Tex bar.  It featured a pretty cool wrapper, and I thought it would be fun one-off for today.

The Texan bar was a nougat-filled milk chocolate bar, while the Tex is described as a creamy milk chocolate with an aerated center and filled biscuit wafers.  So quite different indeed.

To my knowledge, there are no other images of this style of vintage South African TEX bar wrappers on the internet, so this is another CollectingCandy.com exclusive premiere. 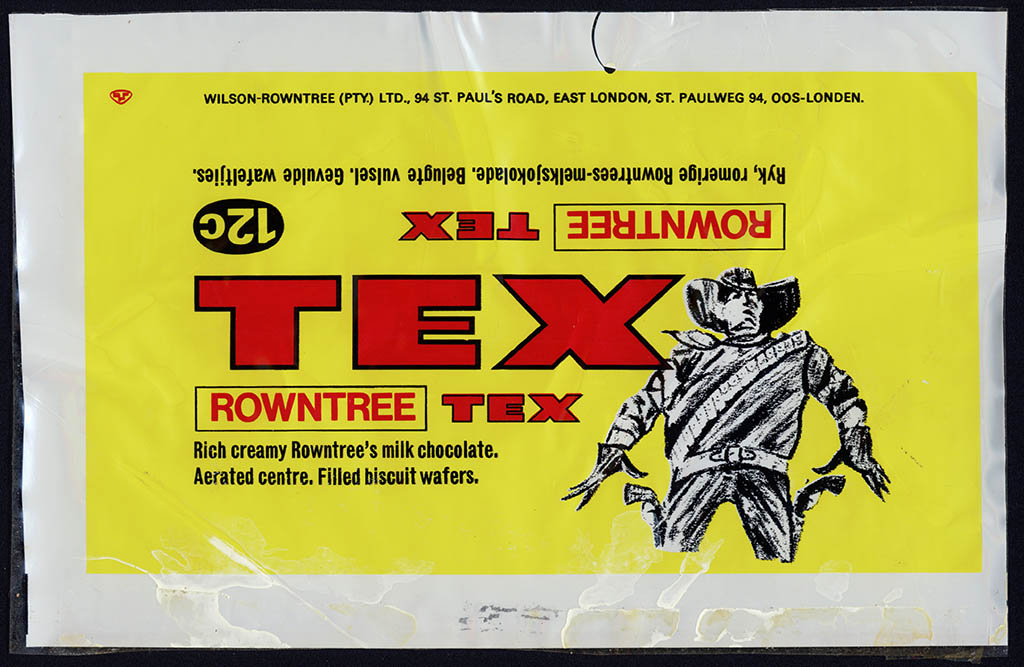 What makes this wrapper for me is partly the name, but mostly the stylized illustration of the cowboy.  He’s got that spaghetti western look, illustrated in black and white on a plain yellow wrapper that really makes it stand out.

The person I acquired this from believed it be a 1980’s wrapper but I’m thinking it’s more likely from the 1970’s.  I can’t be certain, but the simplicity in design and lack of a UPC code points to an earlier release than the 80’s.

Unlike the Texan bar, the TEX is still produced and available today, at least in the United Kingdom.  I’m pretty sure I have a modern Tex wrapper in my files somewhere, but I couldn’t locate it for today’s post.  So I’ve gone to the internet for help — here’s a shot of what the current UK Tex bar wrapper looks like: 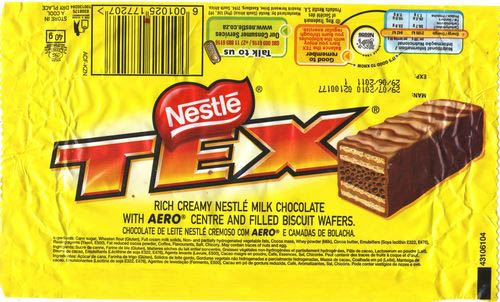 A New York City based writer, editor and sometimes actor. After spending much of the 1990′s in the comic book business helping tell the stories of Marvel Comics’ X-Men as series editor, he has since split his time between developing his own entertainment properties while still consulting and working on others. Having been described as “the Indiana Jones of lost and forgotten candy”, Jason is one of the country’s premier candy collectors and historians with his discoveries appearing in countless blogs, magazines, newspaper articles, and books. Always happy to share his knowledge and unique perspectives on this colorful part of our popular culture, Jason has consulted with New York’s Museum of Food and Drink and has also been a featured guest on Food Network’s Heavyweights, France’s M6 Capital, and New York’s TheActionRoom.com. My Google Profile+
View all posts by Jason Liebig →
This entry was posted in 1970's, 1980's, British, Chocolate, Nestle and tagged 1970's candy, 1980's candy, candy collecting, candy collection, candy collector, candy wrapper collection, candy wrapper collector, collectible, collecting candy, confectionery, confections, cowboy, old west, packaging, South Africa, South African candy wrappers, sweets, vintage candy wrapper, wrapper. Bookmark the permalink.