Back in 1988 Warner-Lambert, the company that created Bubblicious bubble gum a decade earlier, released Candilicious.    A fruit chew confection that I’m guessing was similar to Starburst, Candilicious featured colorful packaging and a name/logo combination that was clearly inspired by the success of the Bubblicious brand.

The connection between Bubblicious and Candilicious is what first caught my attention a few years ago.  I immediately noticed a similarity between the two logos:

I’ve had a few pieces of Candilicious packaging in my collection for a while, but late last year I was finally able to zero in on exactly when they were released, thanks to this great vintage circular ad: 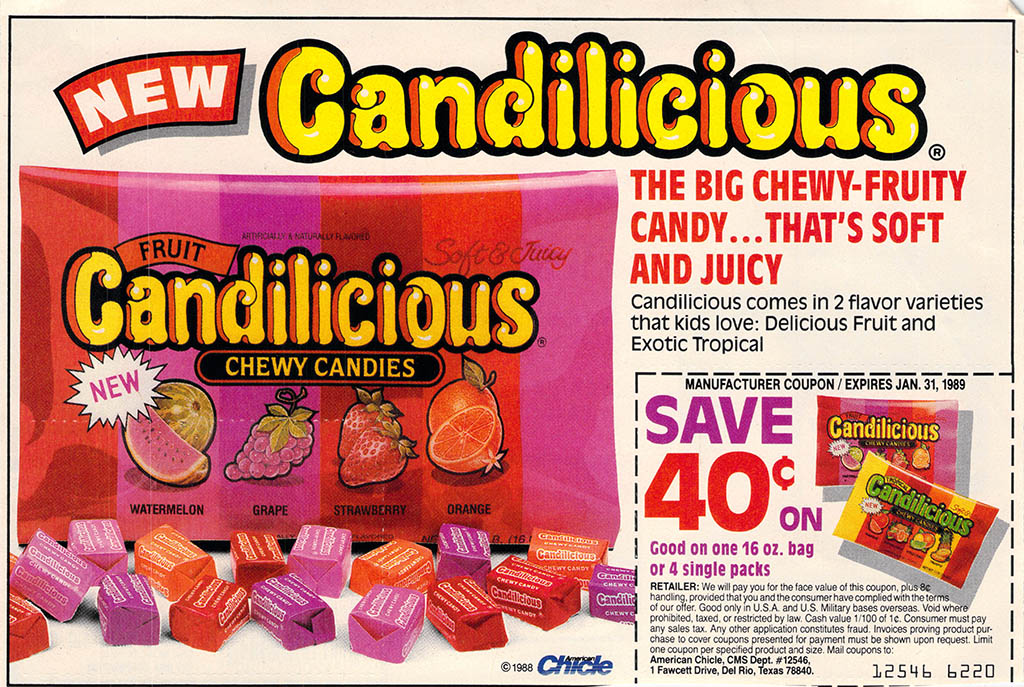 That ad has a number of great qualities.  First, it shows that the Candilicious candy pieces were packaged similarly and had roughly the same shape as Bubblicious bubble gum. The ad also showcases a flavor of Candilicious I’ve never come across before – Tropical: 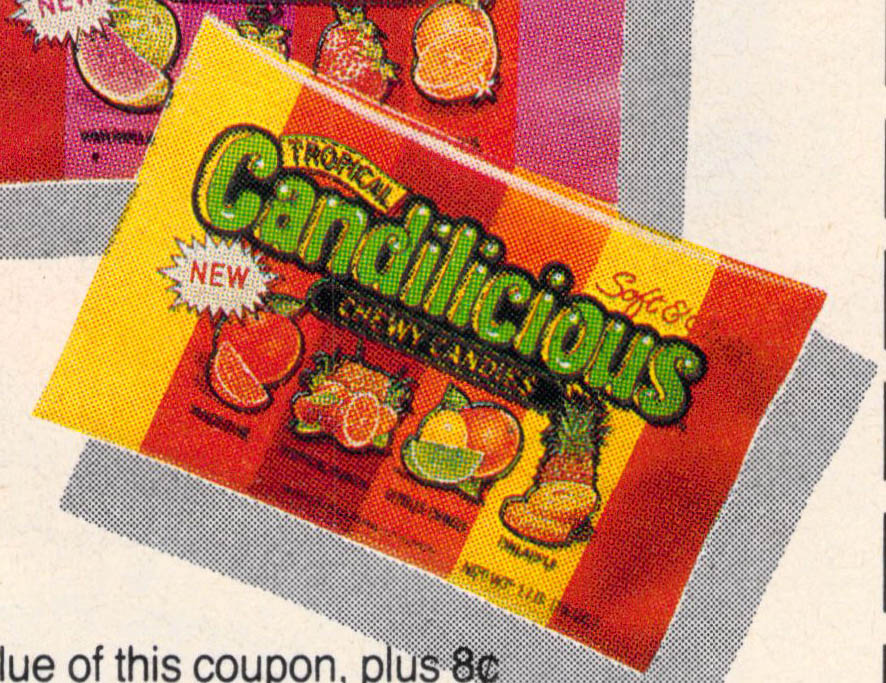 The ad is promoting a 1-pound bag size of Candilicious and I am fortunate to have an example of one in my collection.  This was the first Candilicious piece I came across as a collector: 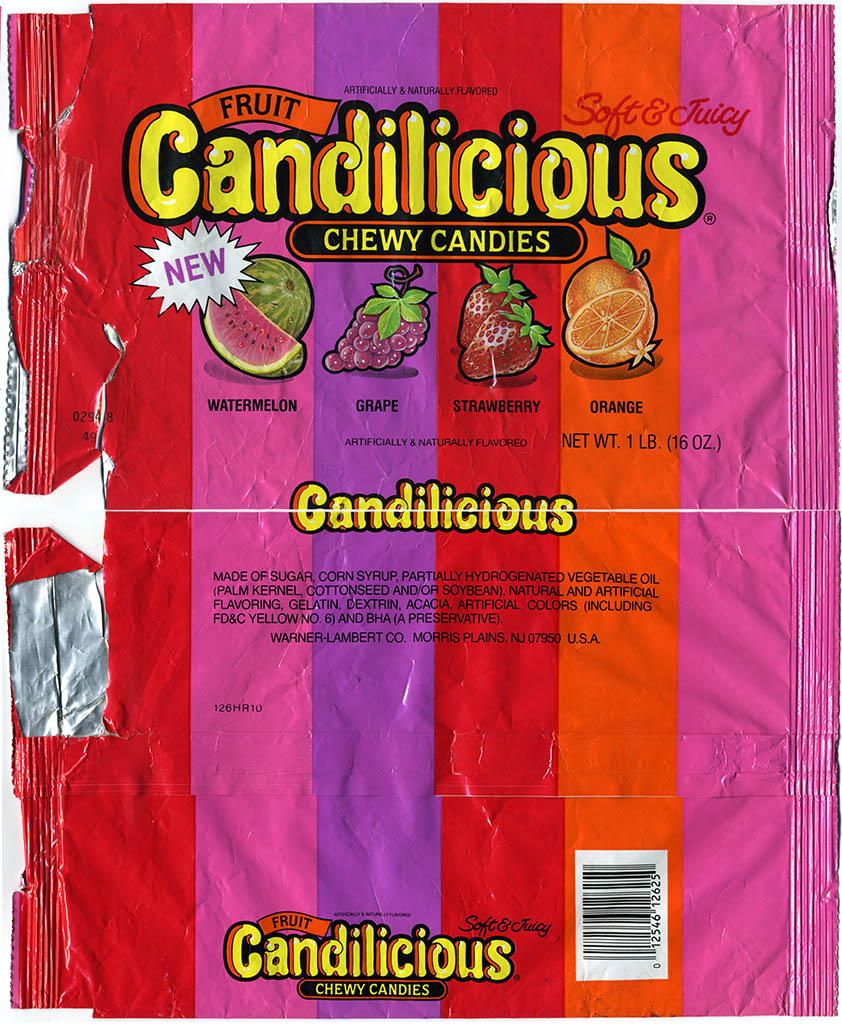 Though that ad doesn’t show one, Candilicious was released in standard, candy-isle-sized single packs.  I have two versions of the standard packaging I can share today.  The first is from when the product was brand new: 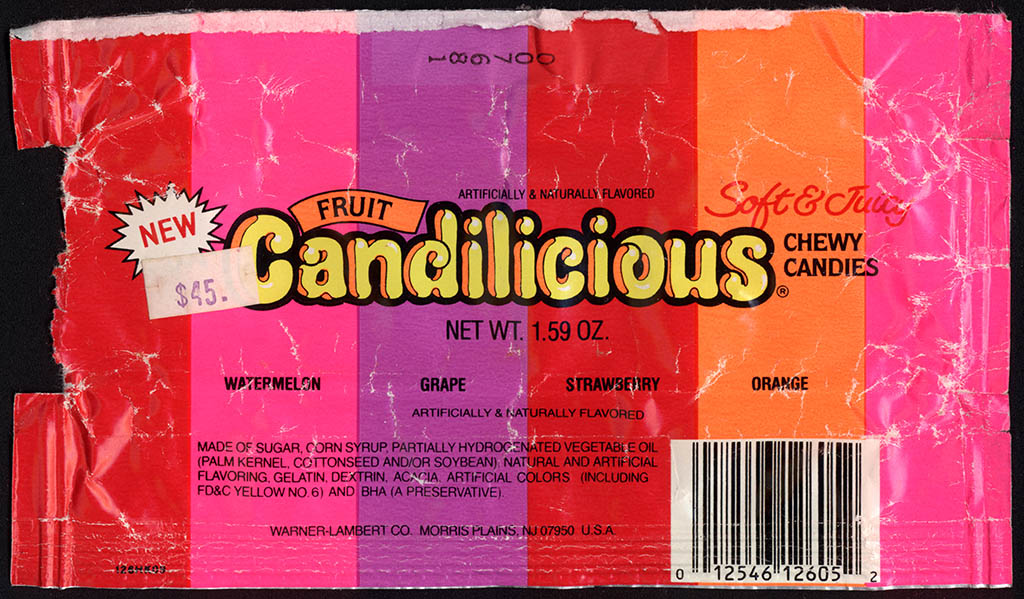 And here’s a pack from a little later, after the “NEW” call-out was dropped: 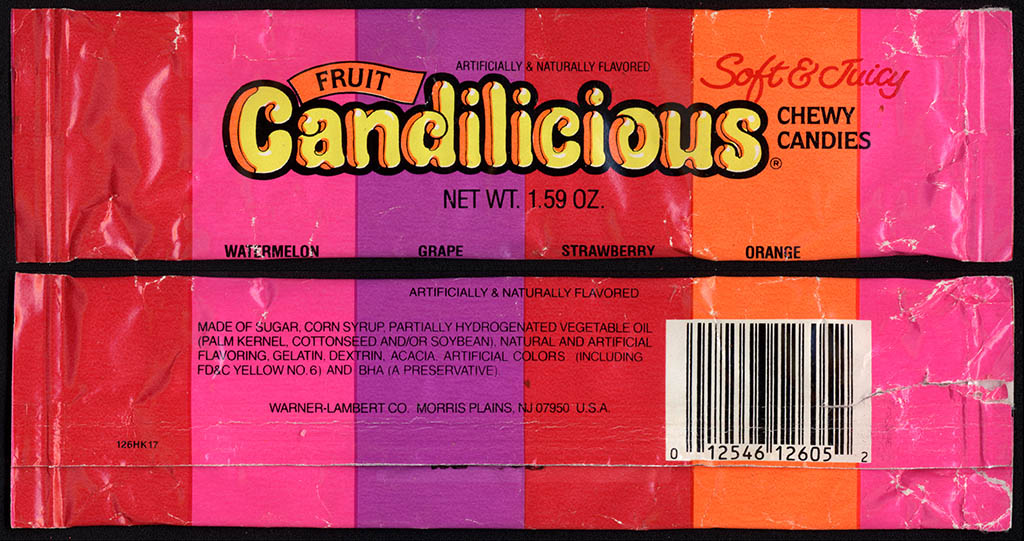 Finally, here are what the individual wrappers looked like:

While discussing today’s topic with my older brother, he recalled seeing a comic book ad for Candilicious while sorting through some old comics recently.  The comic ad features what was likely the early slogan for the brand, “Bigger Than You Figure”: 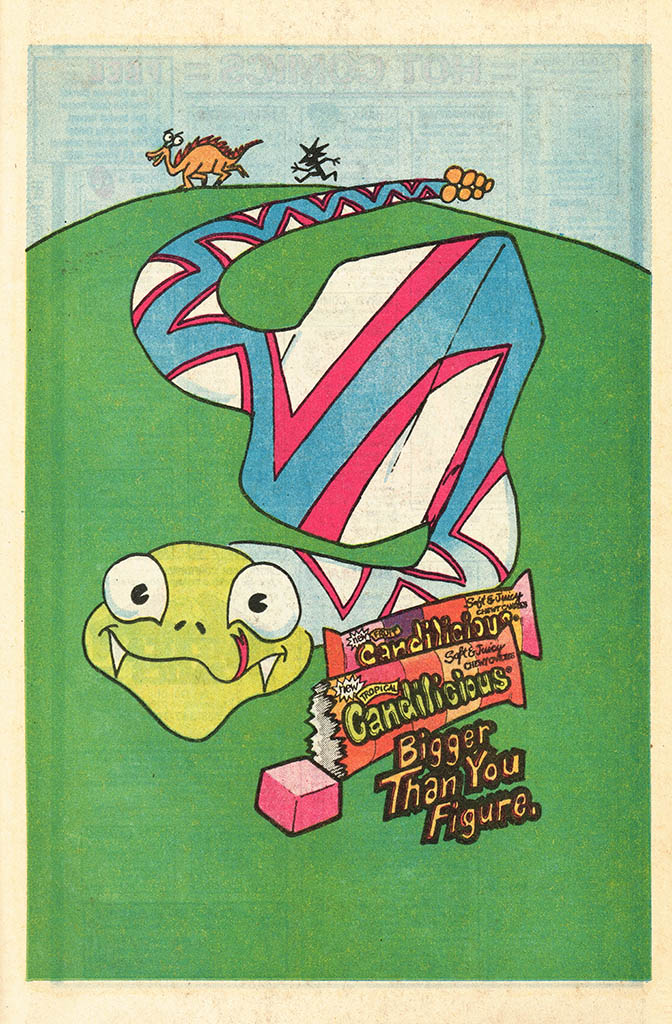 Candilicious never really caught on, though it probably made its way into the 1990’s before finally disappearing.

I have one last item to share today, an early animated television commercial for the brand.  This comes from the YouTube channel of the animator who directed the spot, Sally Cruikshank, and it’s pretty cool!

And that’s everything I’ve got on this interesting fruit-chew-cousin of Bubblicious bubble gum.

A New York City based writer, editor and sometimes actor. After spending much of the 1990′s in the comic book business helping tell the stories of Marvel Comics’ X-Men as series editor, he has since split his time between developing his own entertainment properties while still consulting and working on others. Having been described as “the Indiana Jones of lost and forgotten candy”, Jason is one of the country’s premier candy collectors and historians with his discoveries appearing in countless blogs, magazines, newspaper articles, and books. Always happy to share his knowledge and unique perspectives on this colorful part of our popular culture, Jason has consulted with New York’s Museum of Food and Drink and has also been a featured guest on Food Network’s Heavyweights, France’s M6 Capital, and New York’s TheActionRoom.com. My Google Profile+
View all posts by Jason Liebig →
This entry was posted in 1980's, Gum and tagged 1980's, 80's, Bubblicious, candy collecting, candy collection, candy collector, candy wrapper collection, candy wrapper collector, collectible, collecting candy, confectionery, confections, fruit chew, packaging, Starburst, sweets, vintage candy wrapper, wrapper. Bookmark the permalink.