Star Trek The Next Generation Chocolate Bars and More!

Back in September, I posted about the 1970’s UK Nestle bars based on the Star Trek Animated Series.  It shouldn’t be a surprise that the licensing behemoth of Star Trek produced other confectionery offerings along the way and today I’m going to look at ones that were based on The Next Generation franchise.

For the Star Trek Next Generation film First Contact, Leaf produced a set of licensed bars featuring six different collectible wrappers.  Unlike so many other pieces of vintage candy packaging, these are not terribly uncommon.  Star Trek fans are passionate collectors so it’s safe to assume that many of these have survived in various Trek collections around the globe.

While these wrappers may not be as obscure and uncommon as many of the pieces I share on CollectingCandy, I still think they’re pretty cool and wanted to include them.   Here they are: 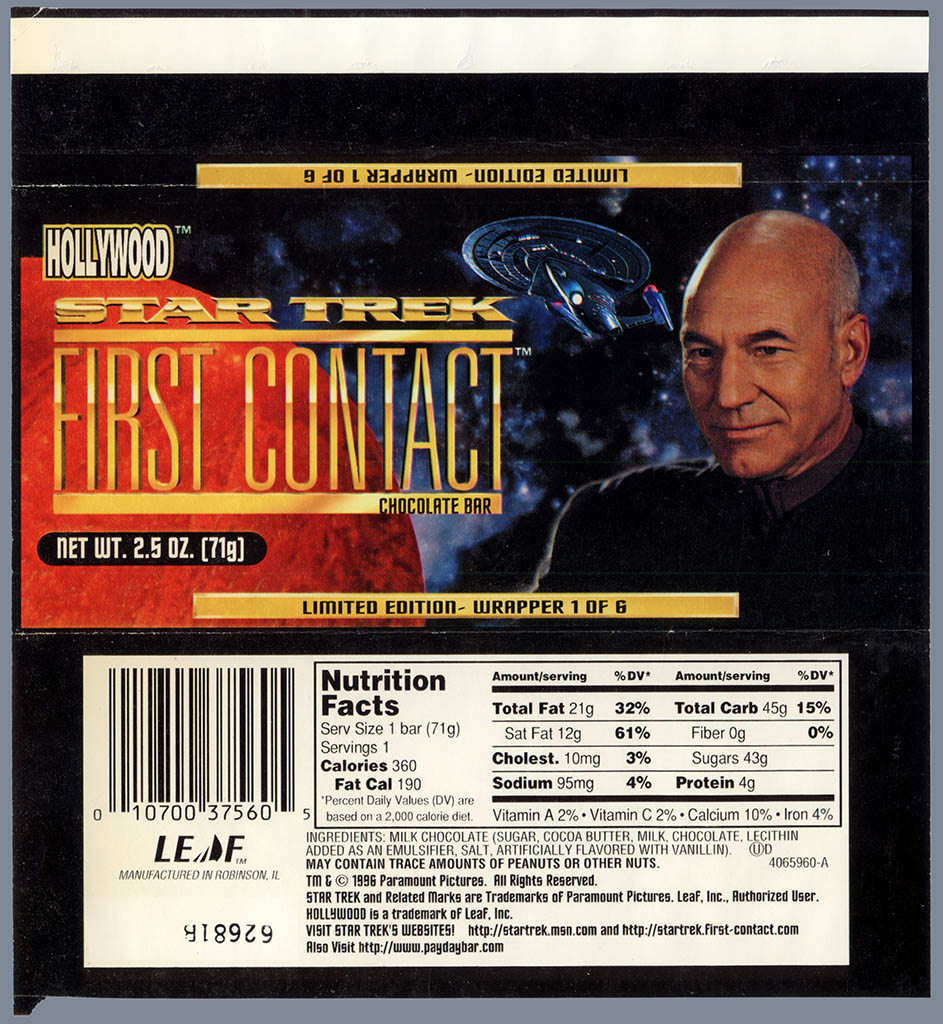 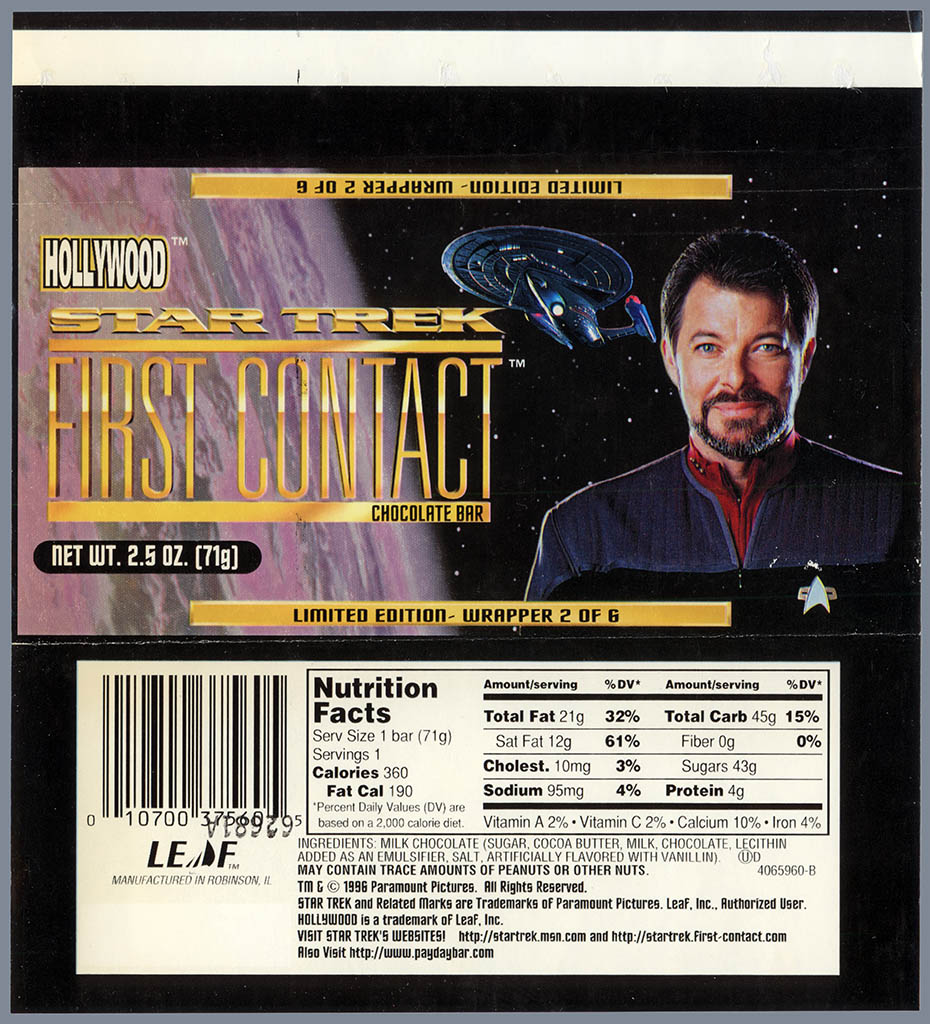 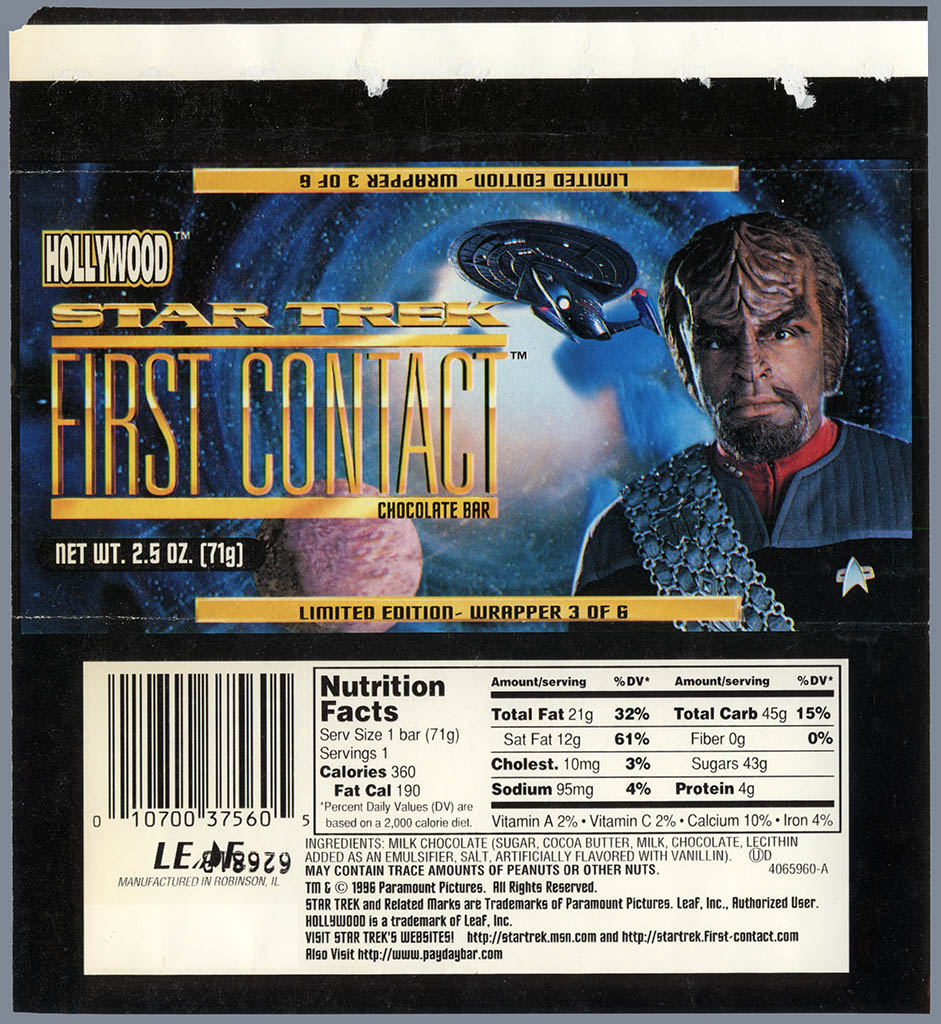 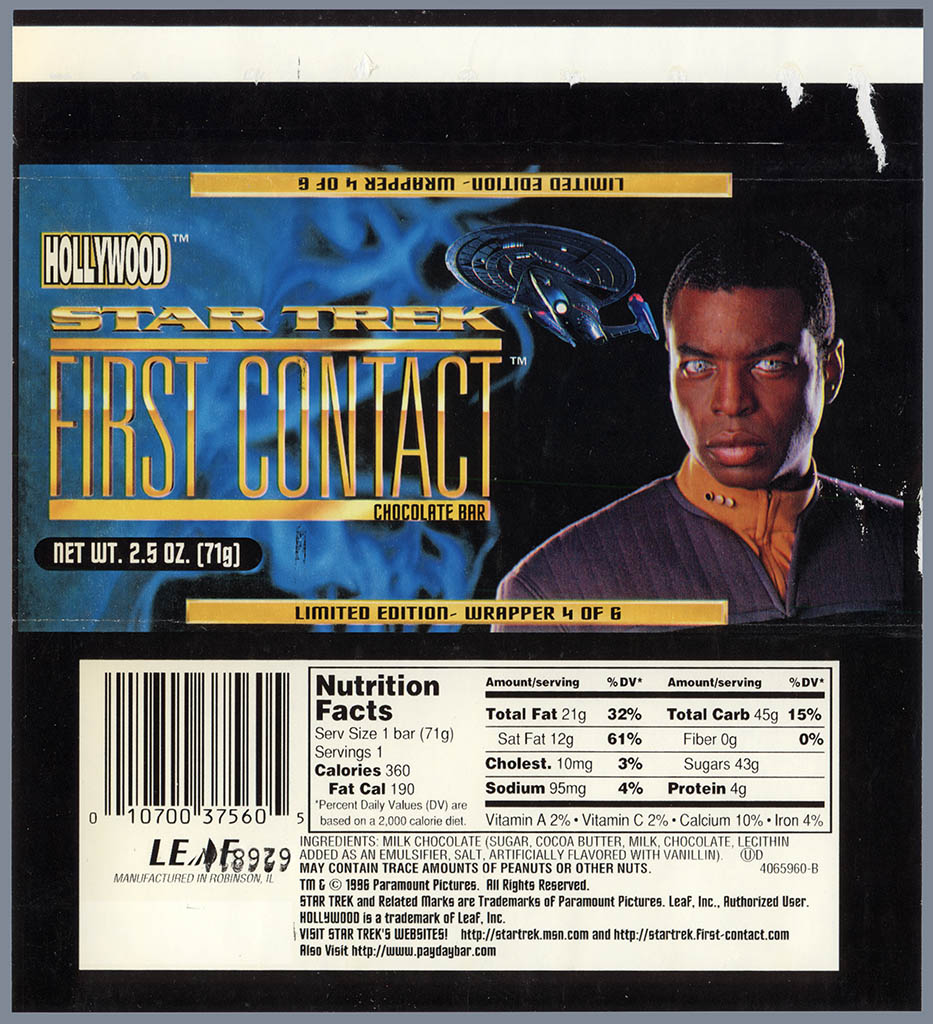 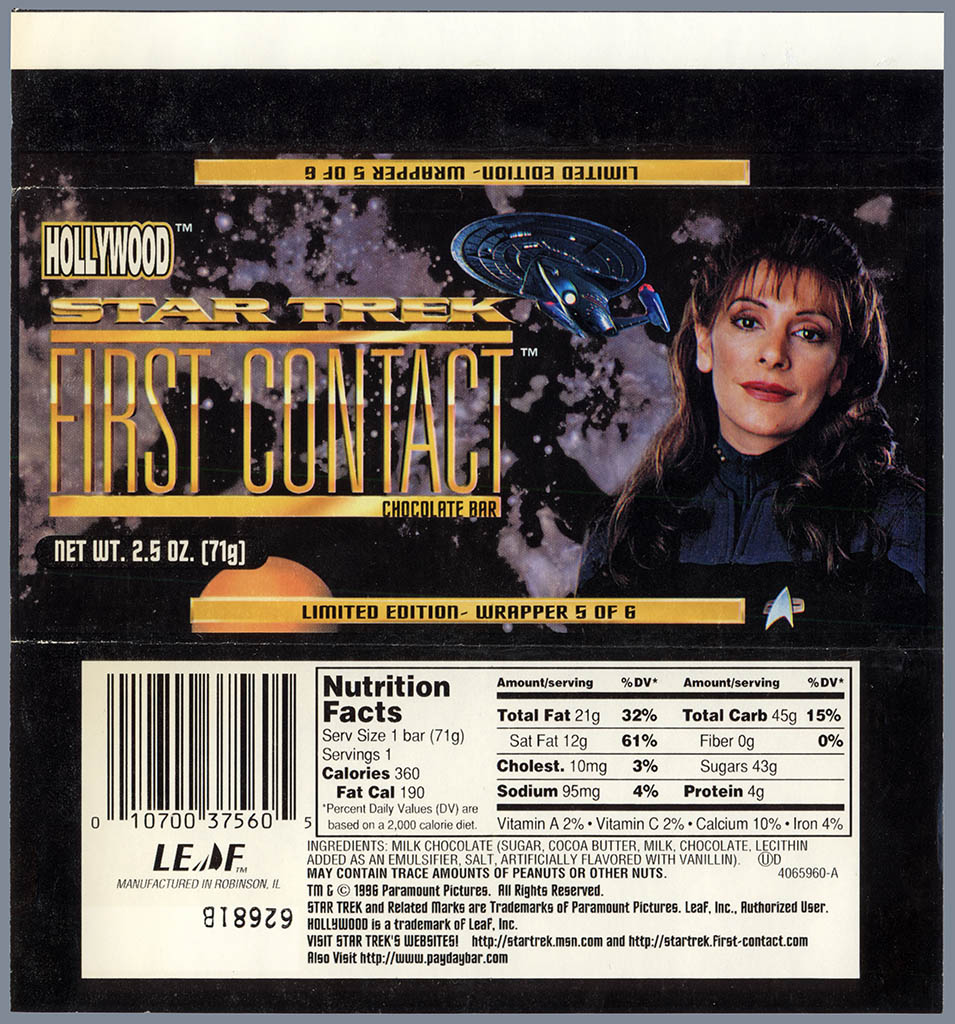 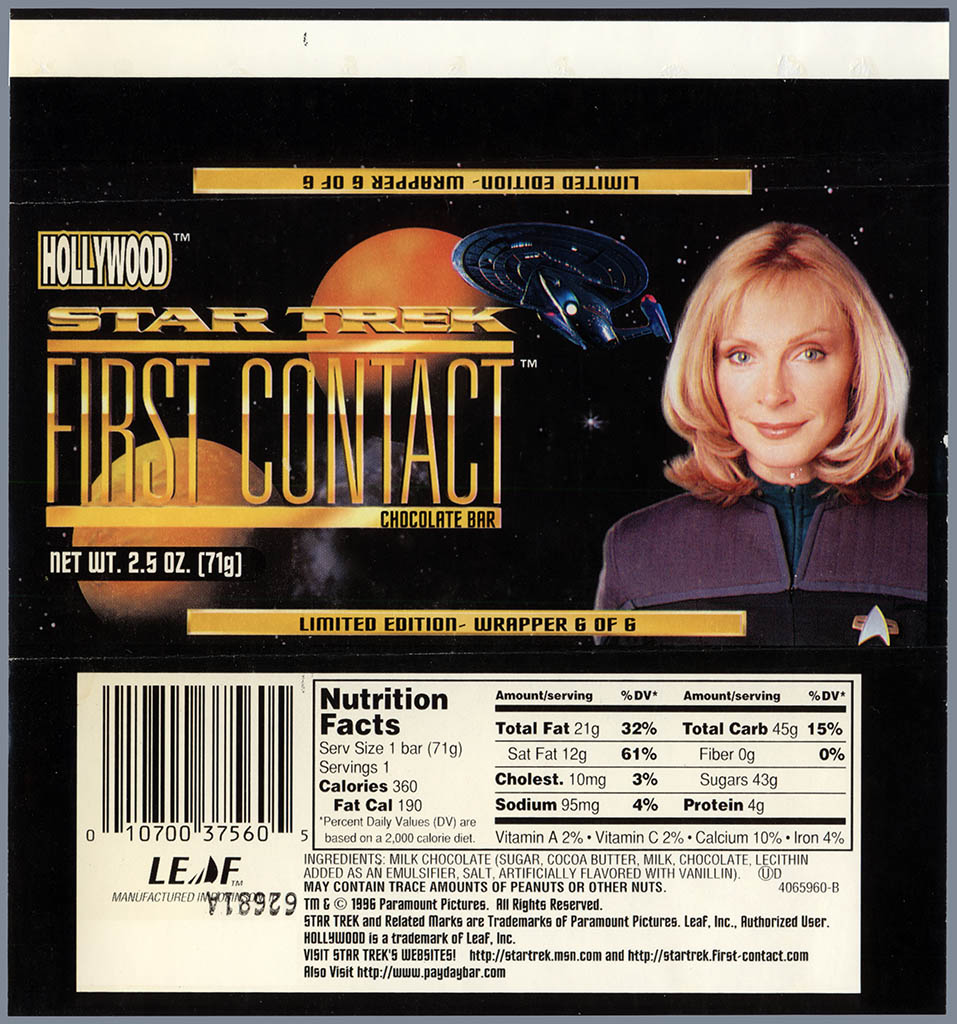 So those are the wrappers that were produced in conjunction with the First Contact film release.  But it’s not the only Next Generation candy I have to share today.

Next up is something I’ve only come across once – it’s a package for Star Trek – The Next Generation Photon Candies.  Produced by a company called New Age Services, I suspect these were a short-lived product created exclusively for mail-order or perhaps comic book shops. Check it out: 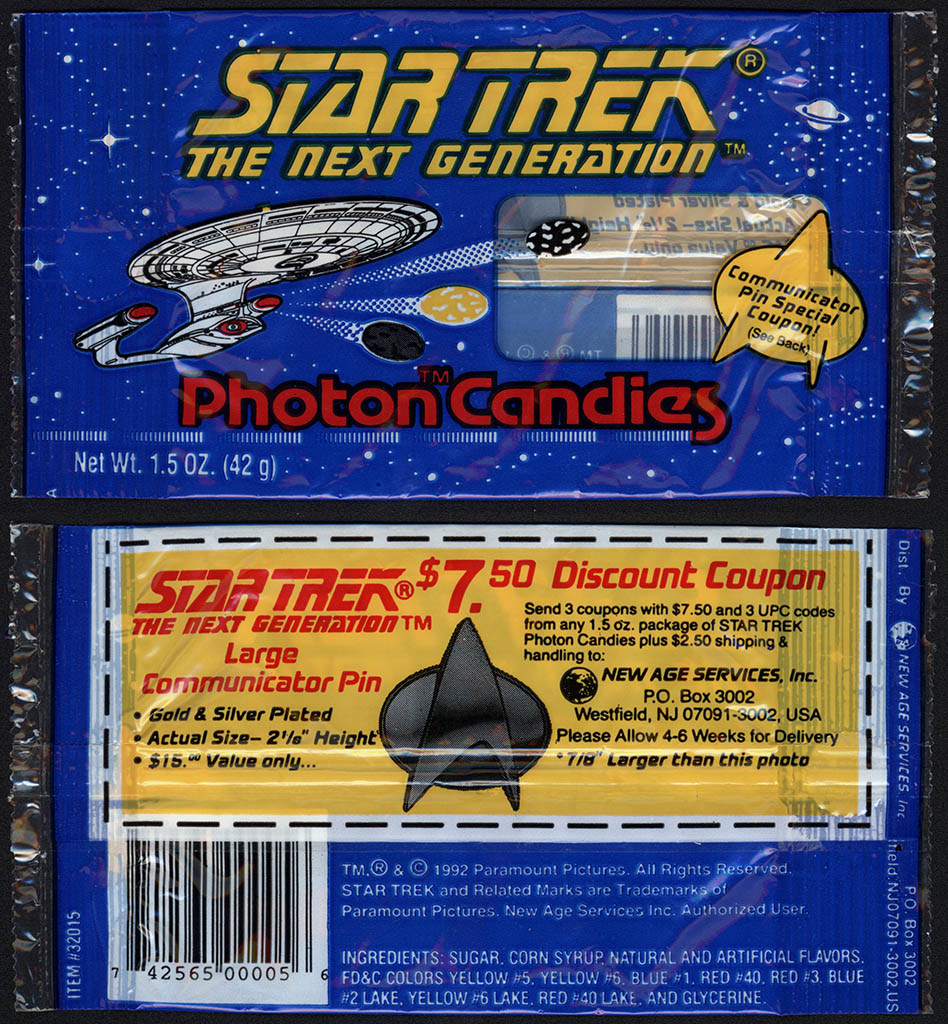 When I received this package, it still had the twenty-year-old candy inside.  The candy was well-preserved, but I always try to dispense with candy contents whenever I can, to avoid later decomposition.  I did snap a photo so at least you could see just what photon candies looked like: 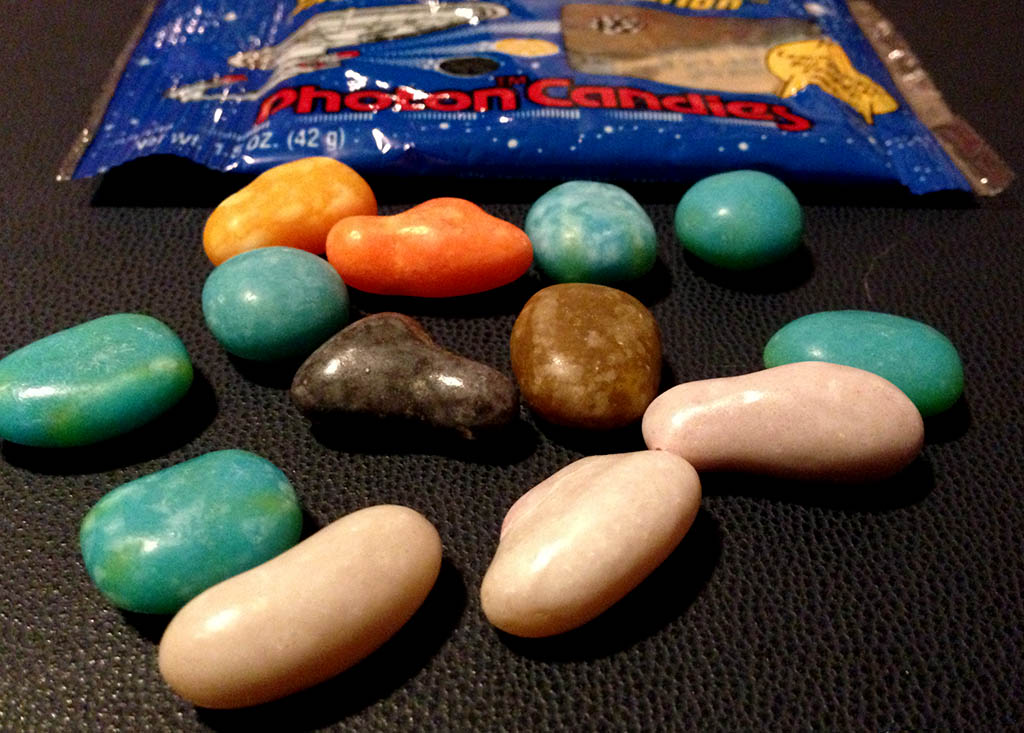 So photon candies were a bit like jelly bean rock candy… sort of.

And that’s all I’ve got to share today about Star Trek Next Generation candy.  See you next time!

A New York City based writer, editor and sometimes actor. After spending much of the 1990′s in the comic book business helping tell the stories of Marvel Comics’ X-Men as series editor, he has since split his time between developing his own entertainment properties while still consulting and working on others. Having been described as “the Indiana Jones of lost and forgotten candy”, Jason is one of the country’s premier candy collectors and historians with his discoveries appearing in countless blogs, magazines, newspaper articles, and books. Always happy to share his knowledge and unique perspectives on this colorful part of our popular culture, Jason has consulted with New York’s Museum of Food and Drink and has also been a featured guest on Food Network’s Heavyweights, France’s M6 Capital, and New York’s TheActionRoom.com. My Google Profile+
View all posts by Jason Liebig →
This entry was posted in 1990's, Chocolate and tagged candy collecting, candy collection, candy collector, candy wrapper collection, candy wrapper collector, collectible, collecting candy, confectionery, confections, licensed, Next Generation, packaging, Paramount, Roddenberry, Star Trek, STTNG, sweets, Trek, vintage candy wrapper, wrapper. Bookmark the permalink.

1 Response to Star Trek The Next Generation Chocolate Bars and More!