Cadbury’s Curly Wurly has been a staple of British confectionery since its introduction in 1970.  But few people know that it was given a couple early shots at success here in the United States as well.  Today, I’m going to take a look at the brief run of Cadbury’s American release of the Curly Wurly bar.

I’ve mentioned the American Curly Wurly in my first big coverage of the topic back in February – Collecting Curly Wurly.  Since then, I’ve uncovered new information and picked up some great American Curly Wurly materials that allow me to put together a reasonably complete look at the USA release of the brand.

Until recently, I had long-assumed that Cadbury brought their Curly Wurly over to the United States after the similar Mars Marathon bar was released here, but it turns out that’s not the case.  [I should note that the history of the Mars Marathon bar predates its domestic release – the story is a bit serpentine, but you can read about that here.]  Curly Wurly’s American release predated that of the Marathon by a handful of months.  It was first announced in the candy trades in the summer of 1973:

The initial trade ad focused on the twisty shape of the bar: 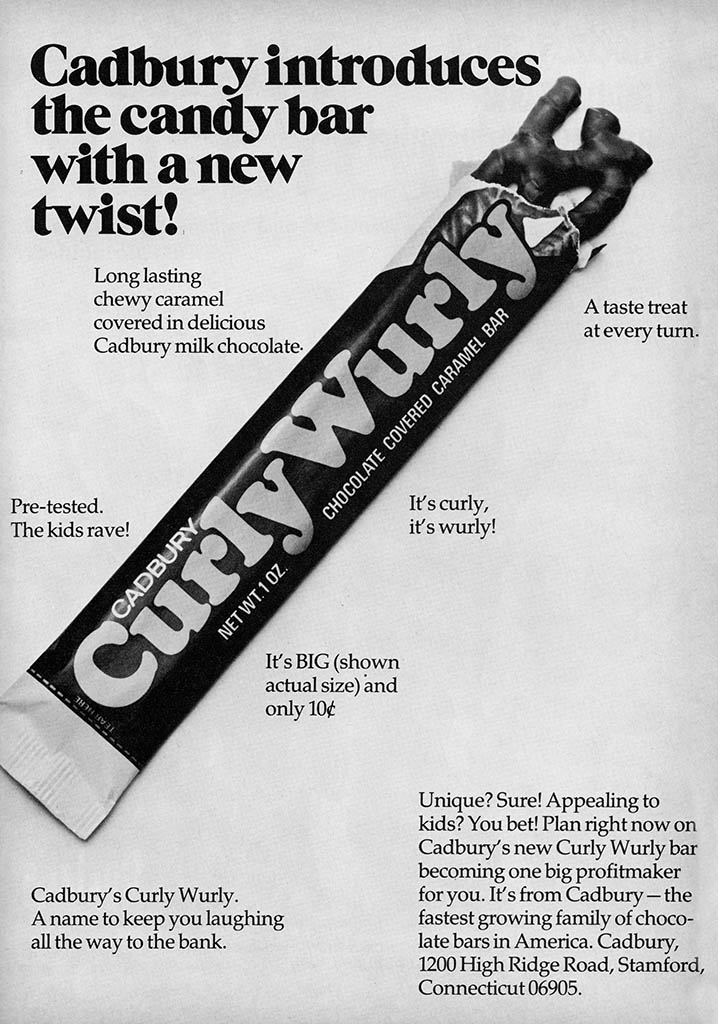 Many Americans might have first seen the Curly Wurly bar in this newspaper ad from October 1973.  It features a pair of mascots that I’ve never found anywhere else:

The following year in mid-Summer, Cadbury highlighted the Curly Wurly along with the entire Cadbury USA lineup: 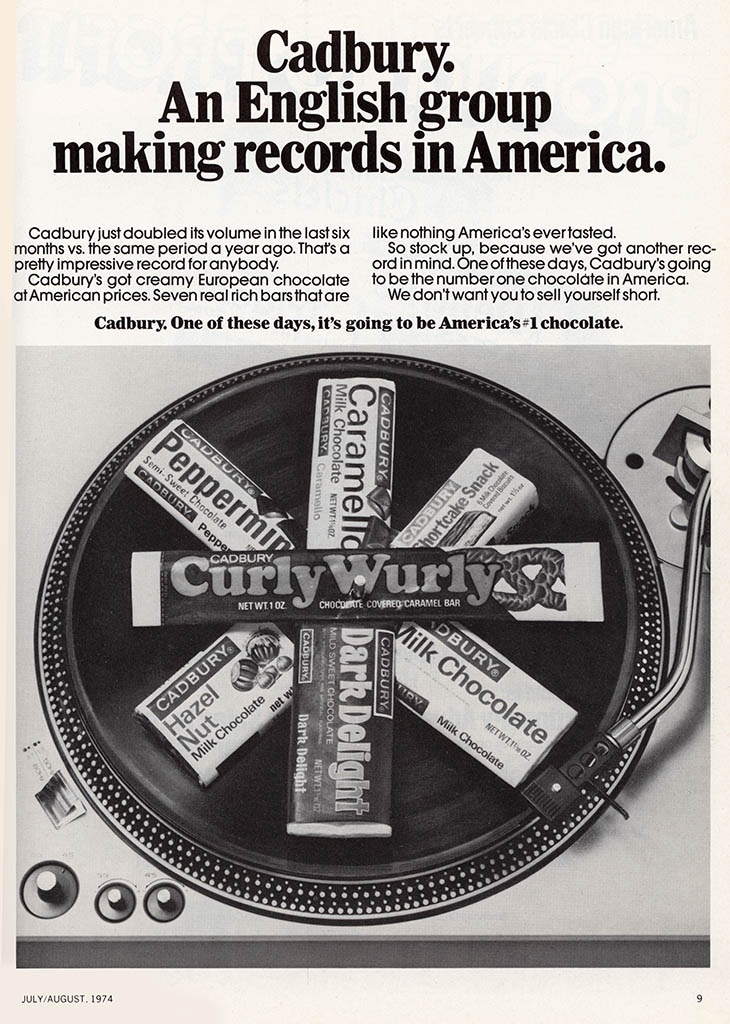 The ad received a minor tweak just a few months later.  The line about “an English group” was removed.   I can only speculate as to why the change was made.  Perhaps there was a concern that the line might confuse distributors into thinking the Cadbury lineup was a high-priced import.  Here’s the revised ad: 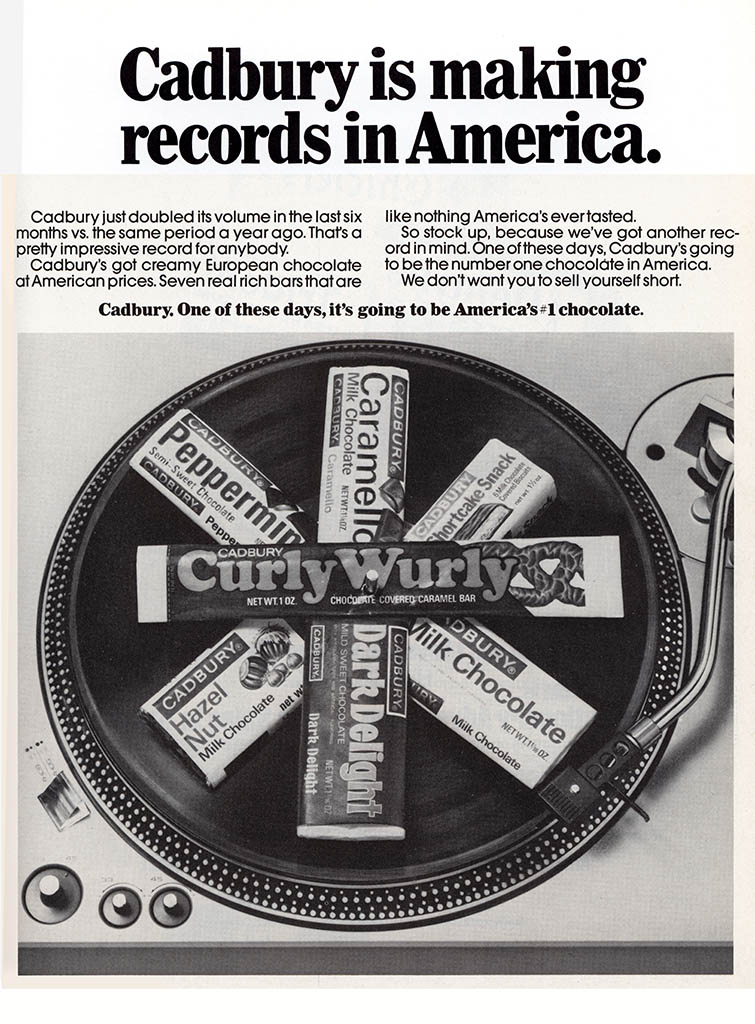 That early 70’s Curly Wurly wrapper is pretty basic, but I’m a Curly Wurly collector so it’s one that stands on my ever-growing want-list.

I haven’t found any clear evidence of the bar still being sold in 1975, but I also haven’t found that it was discontinued.   The one thing that I have been able to determine is that, by late 1976, the American Curly Wurly had a different look.  Whether that was a redesign or relaunch, I have yet to determine.

Unlike the original USA Curly Wurly, the 1976 redesign brought in a much more lively look.  The logo has a bit of a Willy Wonka flair to it that I really like.  Here is what the later-1970’s American Curly Wurly looked like:

In the late 70’s, Cadbury also released a fun-size offering of Curly Wurly. 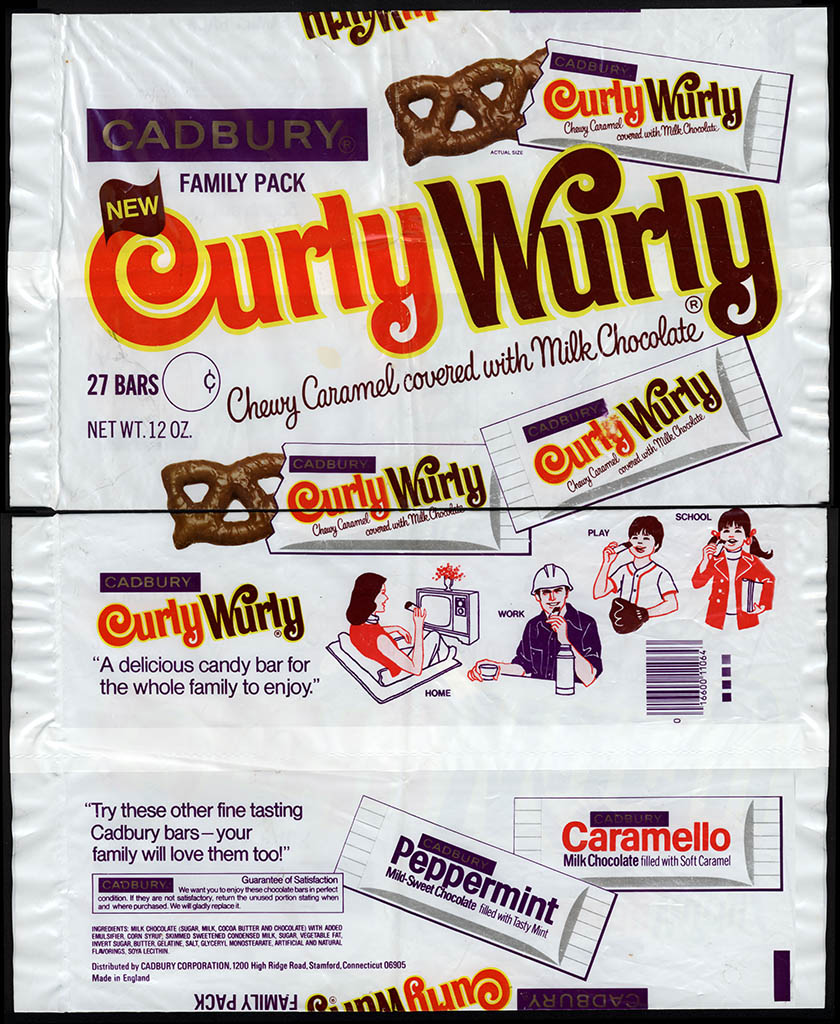 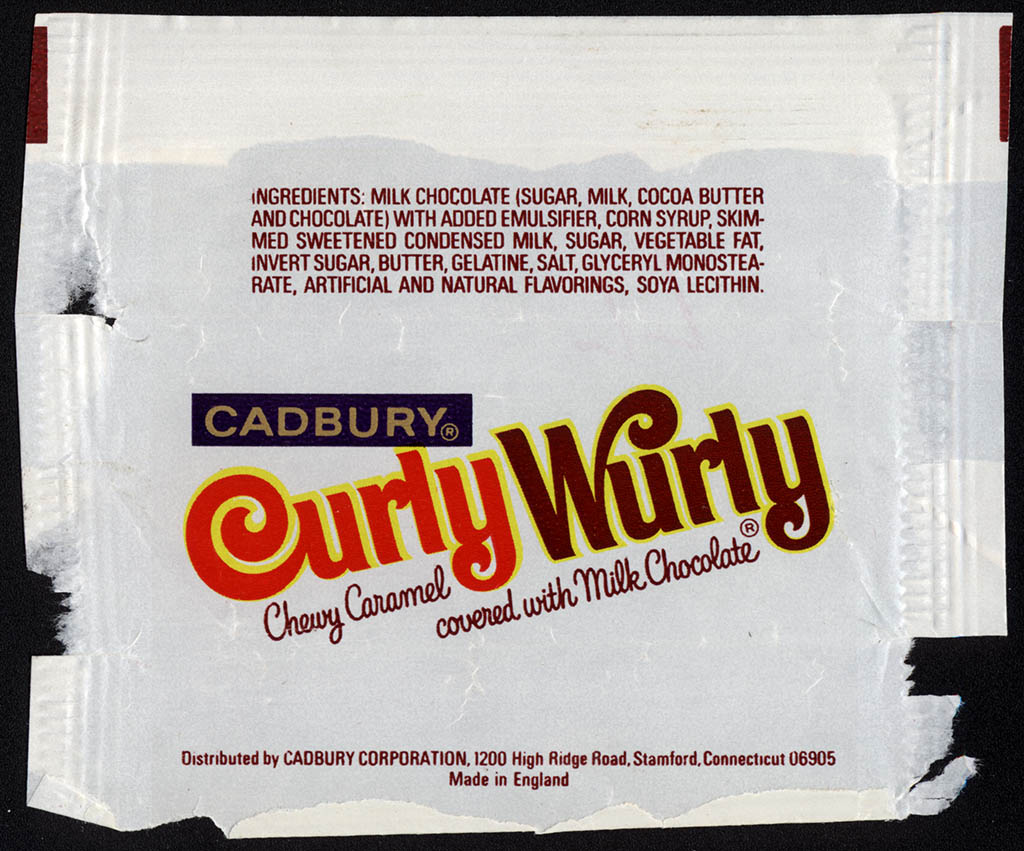 So, Curly Wurly had two distinct looks during it’s time as a Cadbury USA product.  Based on everything I’ve been able to turn up, it appears that by 1979, Cadbury USA ended distribution of the American Curly Wurly.

While the American release was short-lived, the UK Curly Wurly bar continued on and became a timeless classic — still in production to this day and marking its 42nd birthday this year.

And that’s everything I’ve got on the brief run of America’s Curly Wurly.  I hope you’ve enjoyed the look at this short-lived import.

A New York City based writer, editor and sometimes actor. After spending much of the 1990′s in the comic book business helping tell the stories of Marvel Comics’ X-Men as series editor, he has since split his time between developing his own entertainment properties while still consulting and working on others. Having been described as “the Indiana Jones of lost and forgotten candy”, Jason is one of the country’s premier candy collectors and historians with his discoveries appearing in countless blogs, magazines, newspaper articles, and books. Always happy to share his knowledge and unique perspectives on this colorful part of our popular culture, Jason has consulted with New York’s Museum of Food and Drink and has also been a featured guest on Food Network’s Heavyweights, France’s M6 Capital, and New York’s TheActionRoom.com. My Google Profile+
View all posts by Jason Liebig →
This entry was posted in 1970's, British, Cadbury, Chocolate and tagged 1970's candy, 1970's chocolate, 70's chocolate, Cadbury, Cadbury USA, candy collecting, candy collection, candy collector, candy wrapper collection, candy wrapper collector, collectible, collecting candy, confectionery, confections, Curly Wurly, CurlyWurly, packaging, sweets, vintage, vintage candy wrapper, wrapper. Bookmark the permalink.

7 Responses to The Brief Run of America’s Curly Wurly!