My Mid-70’s Halloween Photos – All That Great Candy!

I started my Countdown To Halloween thirty days ago with a personal recollection and a photo from my earliest Halloween.    I’d like to close out my month-long celebration in much the same way – with something fun and personal from my past that ties into the fun of Halloween candy and Halloween candy packaging.   So today I’m going to explore a pair of photos from one of my childhood Halloweens, circa 1975 or 1976.

I wish I had photos from some of the other Halloweens I celebrated as a kid, but at least I have these.

In these photos, you’ll see me in my Ben Cooper Batman costume, and my big brother Jeff  decked out in his Ben Cooper Six-Million Dollar Man getup (That’s my grandmother working the sewing machine in the background and my mother is the one taking the photo).   Here we are: 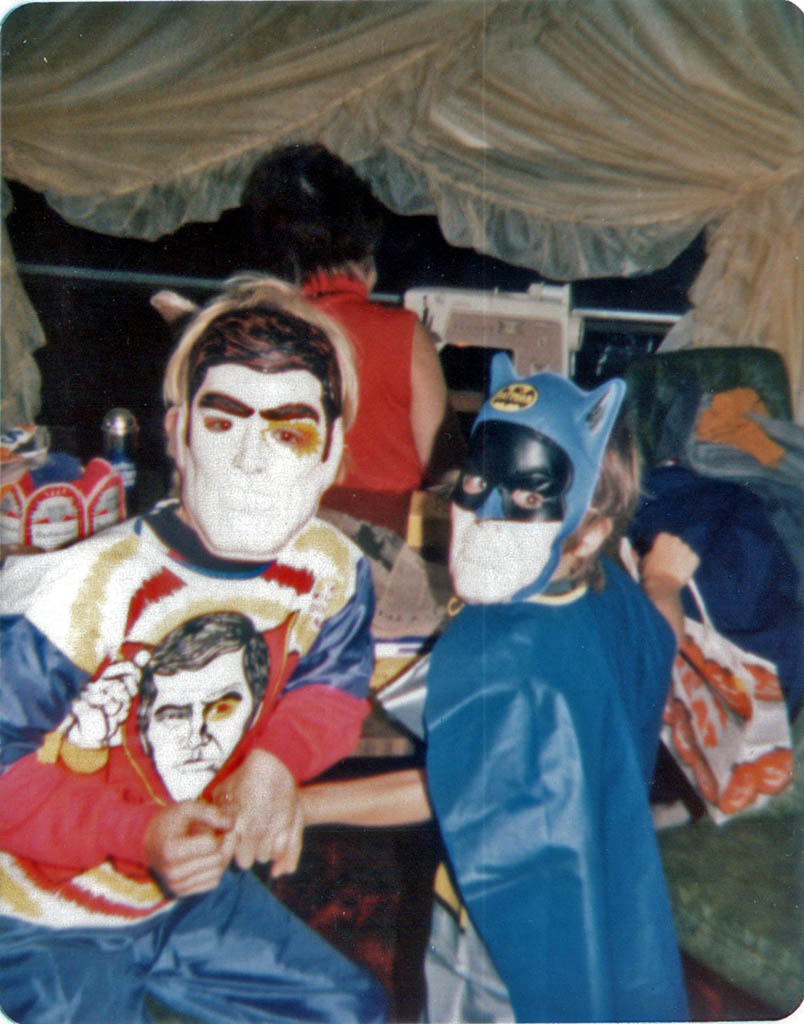 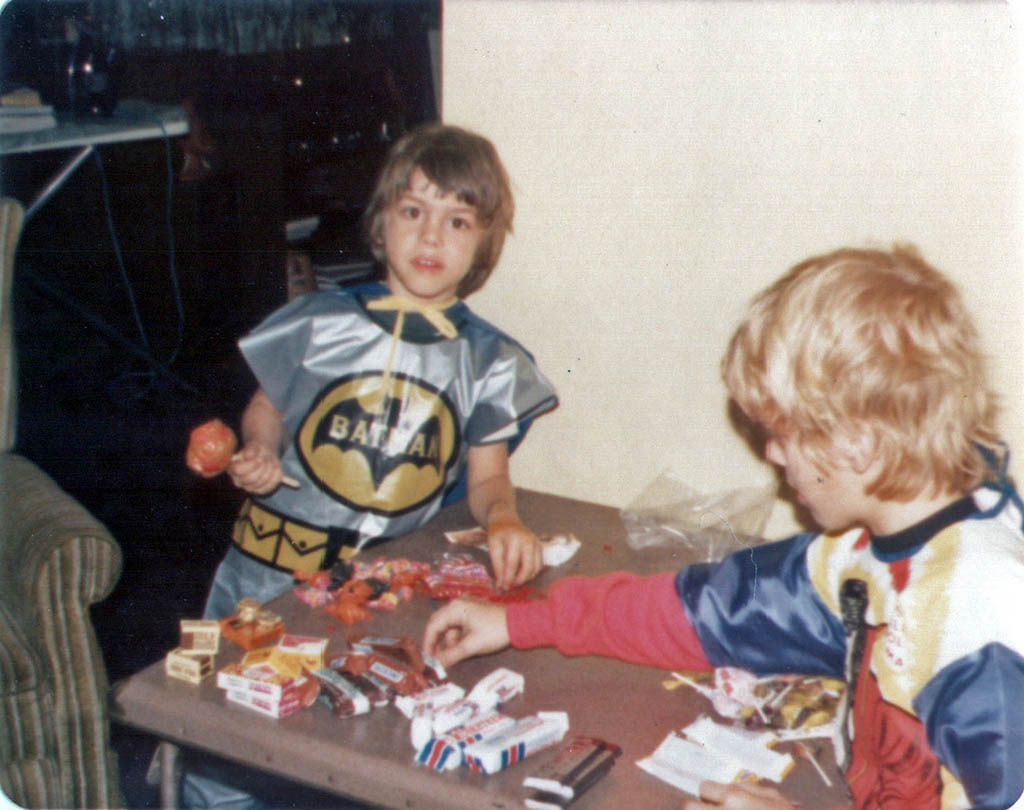 This second photo allows me to have a little CollectingCandy fun, because as you can see, we had a card table set up and we were actively sorting out the goodies we had grabbed during our evening of trick-or-treating.  Well, my brother was sorting – I appear to be trying to scrape-and-consume the caramel off of a caramel apple while mixing in a few Brach’s cinnamon imperials for good measure (yummy!).   Here’s a closeup of the booty:

So, as I look across this image – what do I see?  Well, I see Snickers (Fun-Size) and 3 Musketeers, a Hershey Bar, Milk Duds, Sugar Babies, Reese’s, Double Bubble gum, Dum Dum pops, and Brach’s Candy Corn boxes.  Lots of awesome stuff.

Having identified a number of the items in the photo, I wanted to see what I had in my collection to match it.  Let’s take a look: 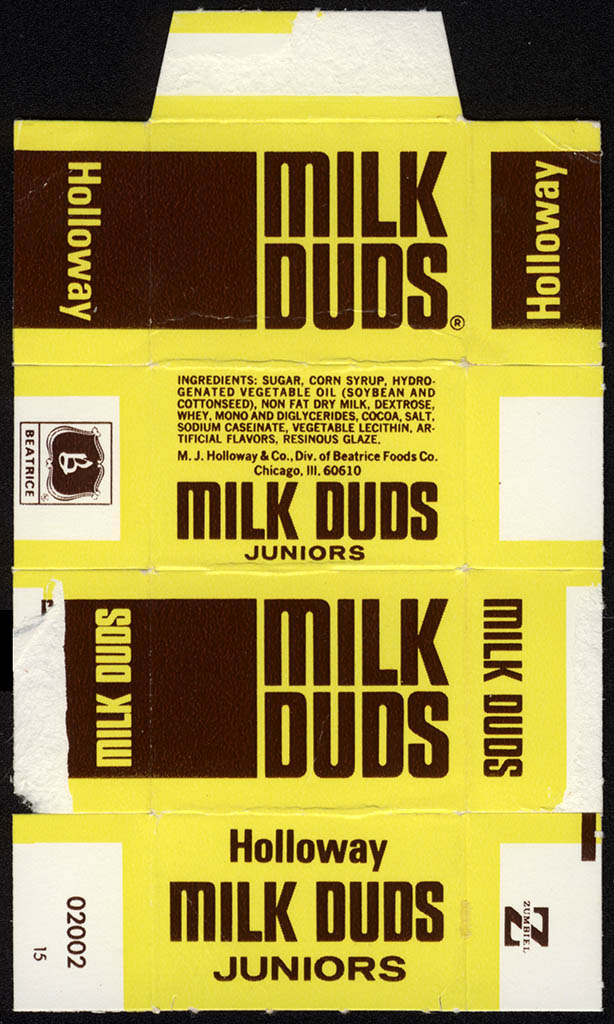 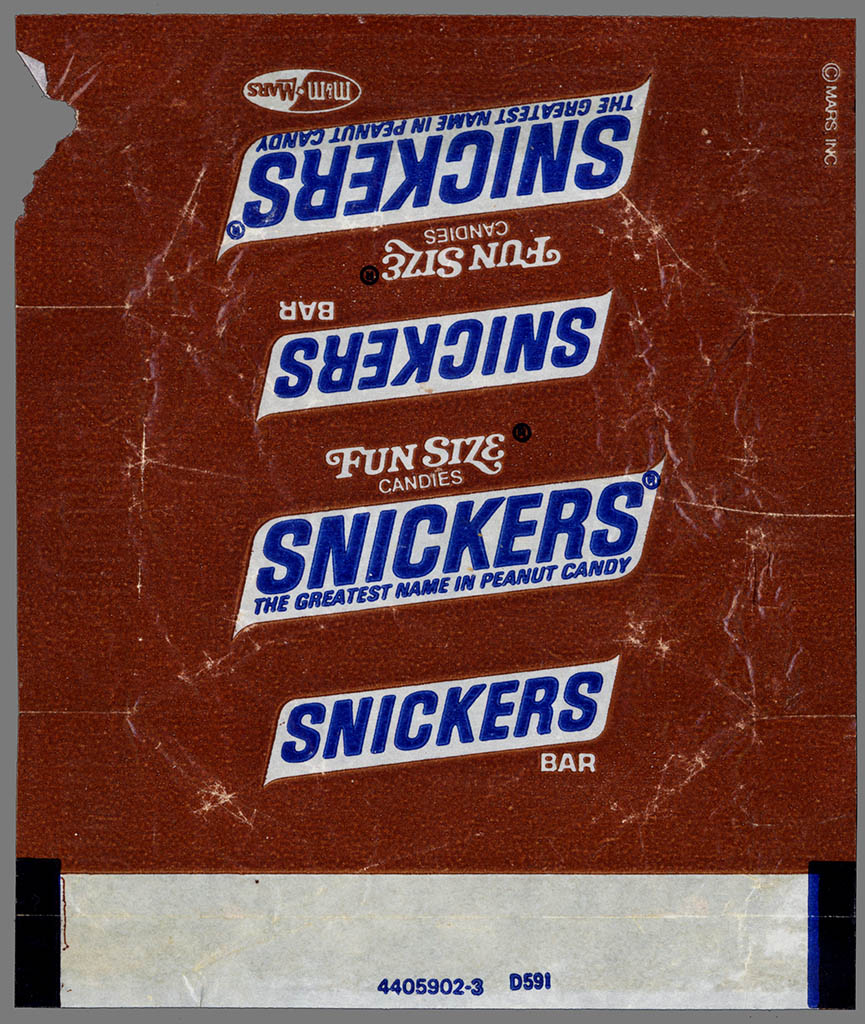 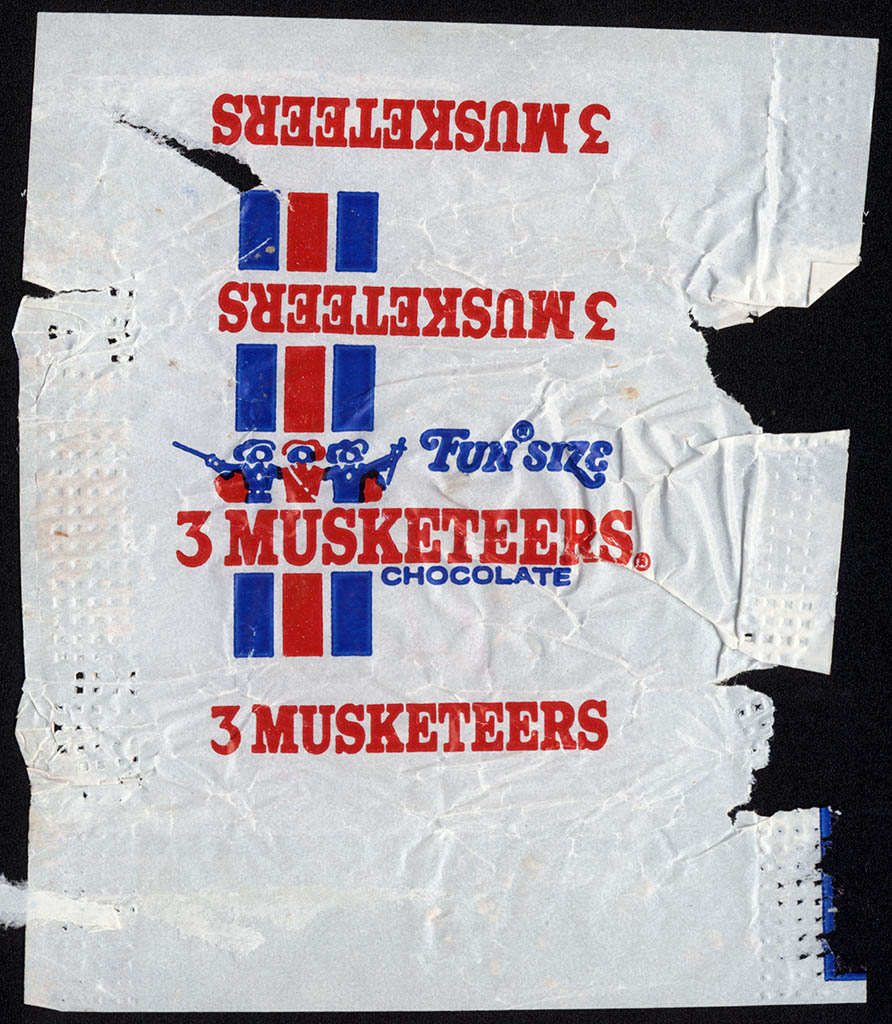 I searched for the Sugar Babies small box in the photo (which seems to have some white-and-red holiday graphics on the back) but the closest I could find was this standard version: 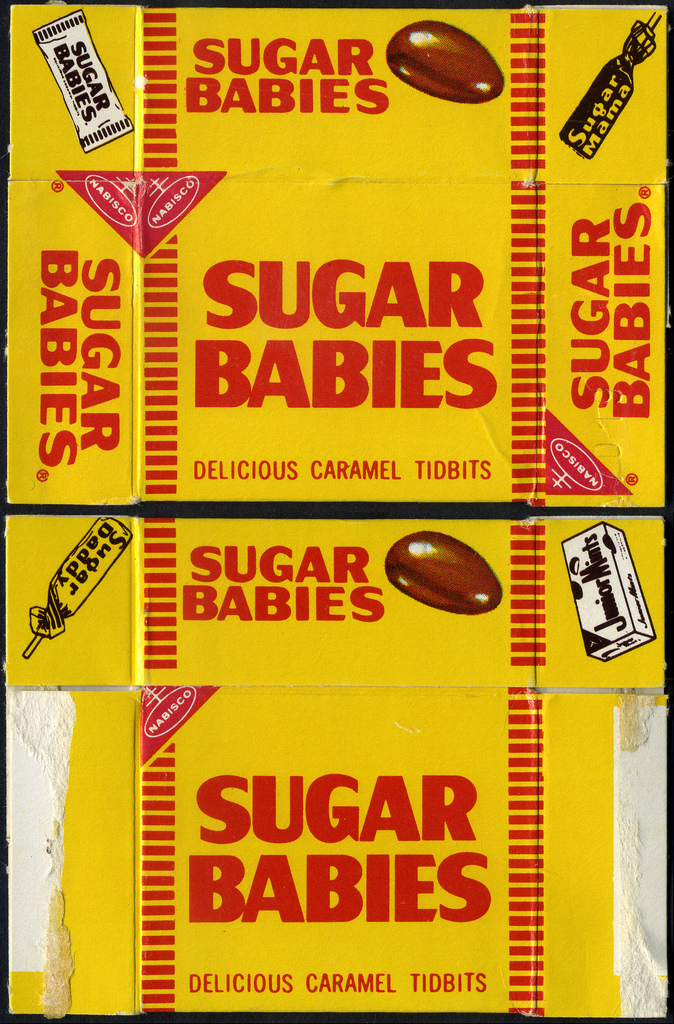 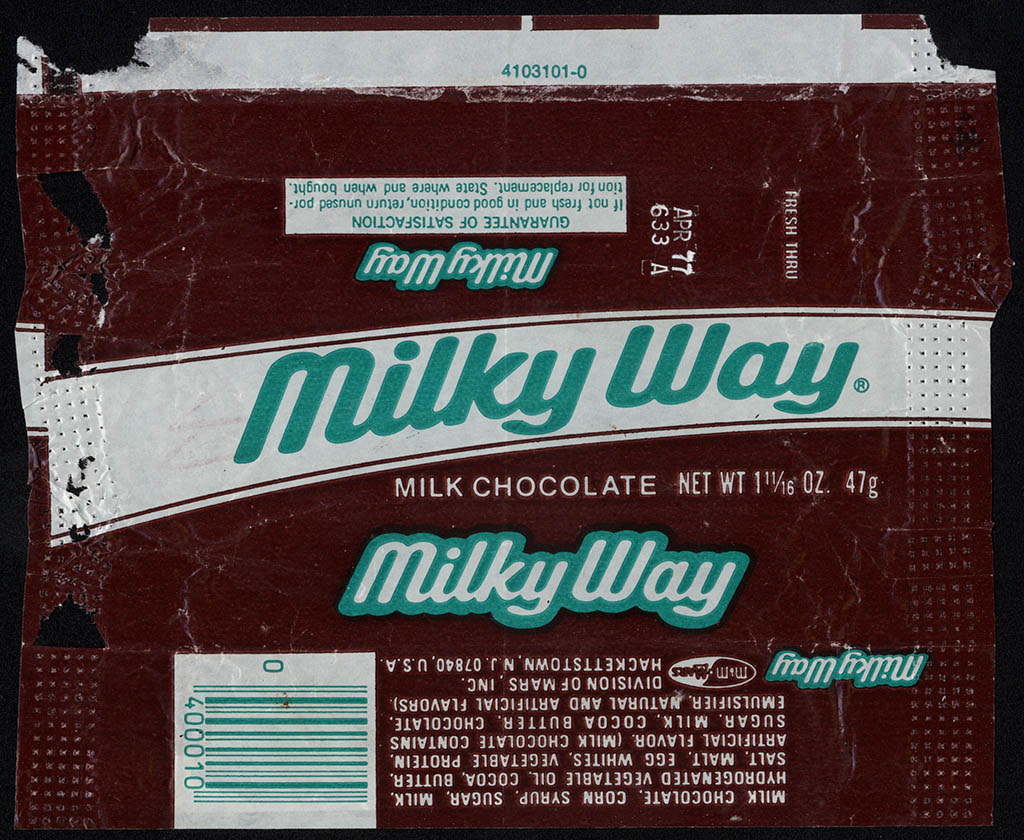 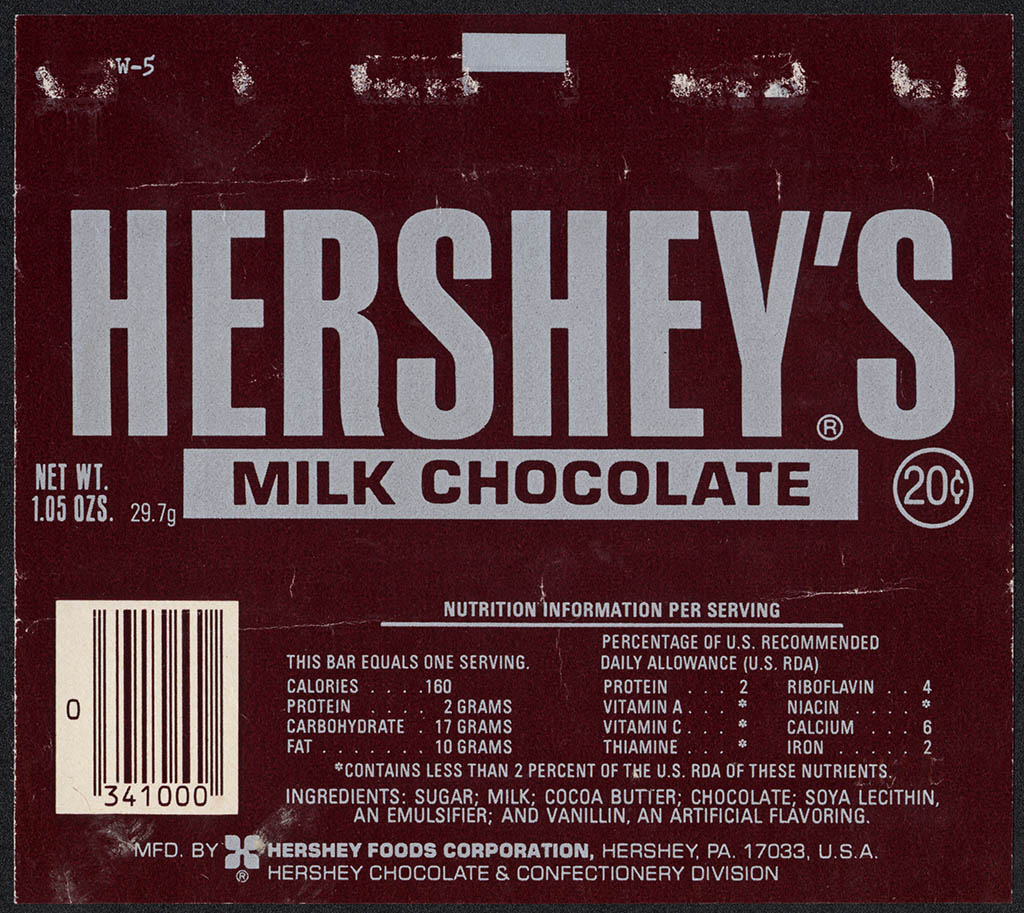 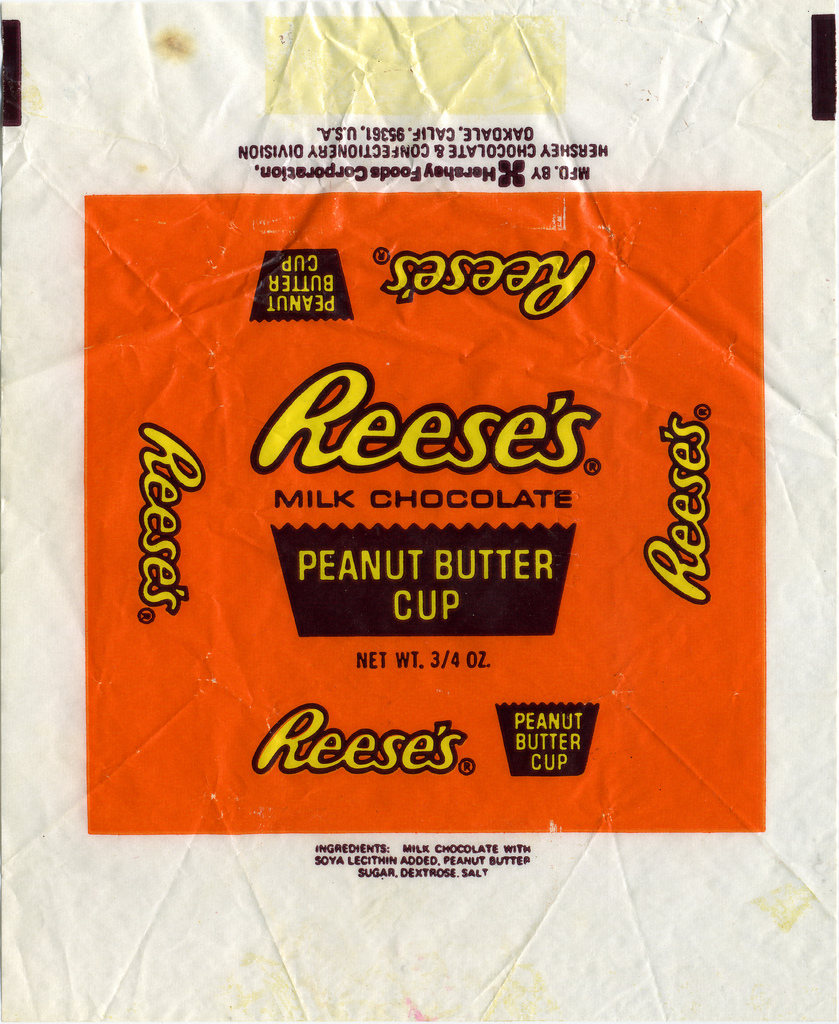 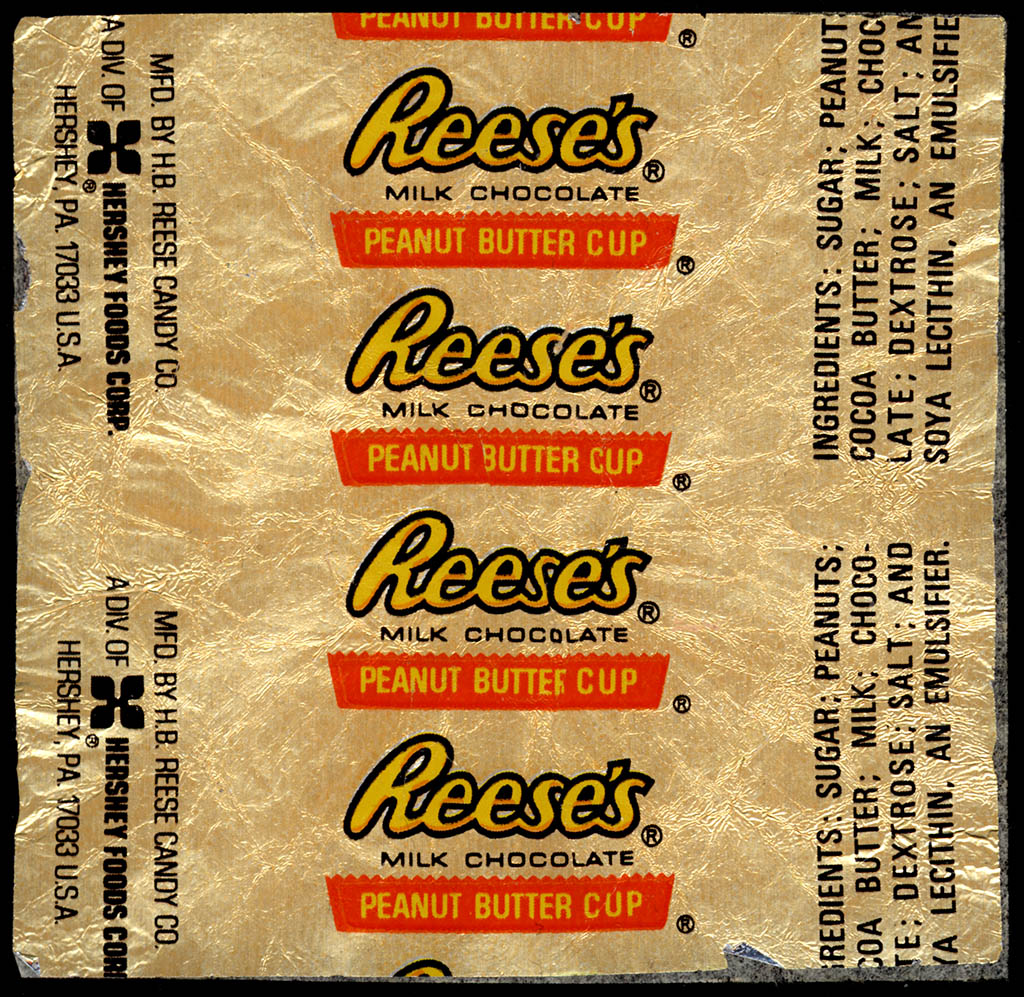 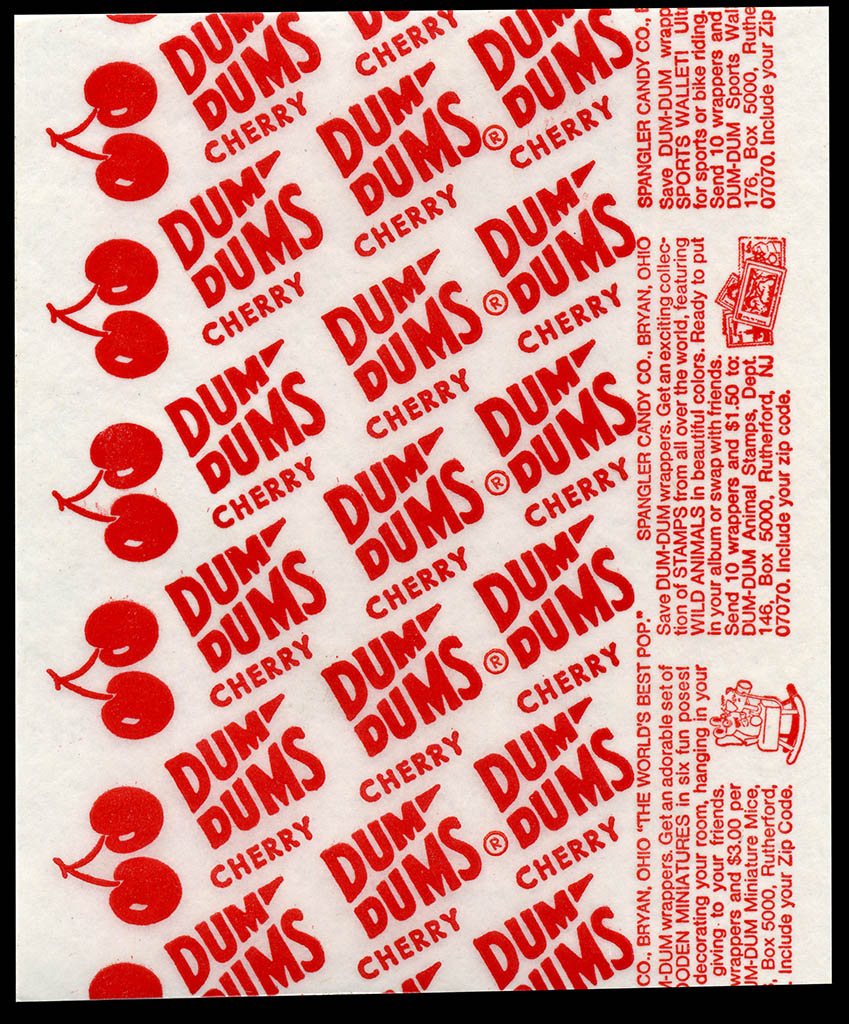 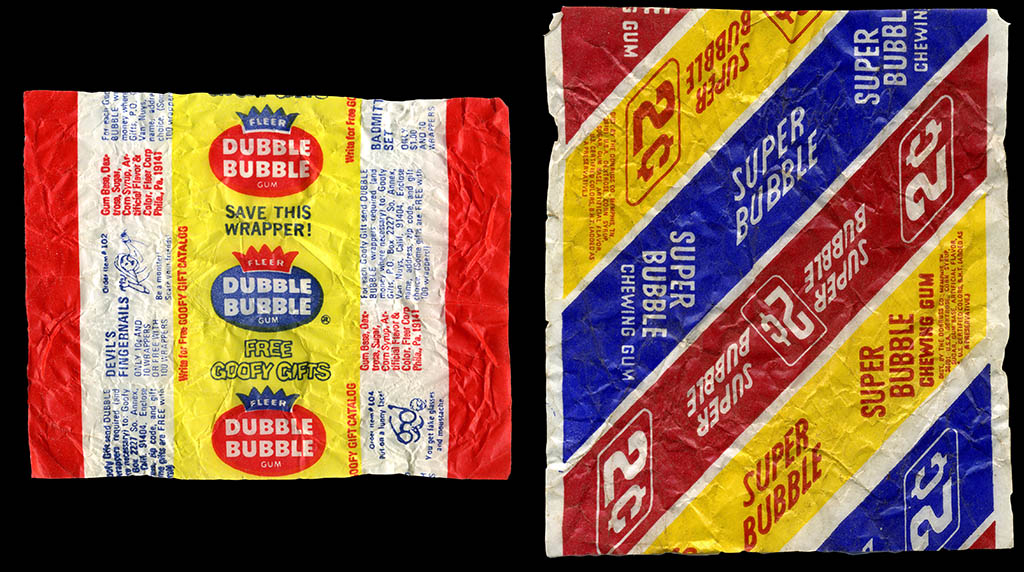 And finally, the Brach’s Candy Corn box – one of my fonder confectionery memories of the period:

Those are the pieces I could identify from this nearly 40-year-old snapshot and match up with pieces from my collection.  Identifying candy items from old photos is a pretty fun thing to try to do, and a fun way to put things onto a collector’s want-list.  It’s fun – but it’s not always easy.   Photos are often blurry and of course finding the things later on can prove to be a years’ long quest.

Halloween really is the best holiday for a candy fan or a candy collector – so it’s somewhat bittersweet to find ourselves at the end.  I just can’t believe it’s Halloween already.  It’s been a tremendous amount of fun assembling these 31 posts this month, and I’m glad I could share them all with you.  I hope you’ve enjoyed visiting and checking out my take on a Countdown To Halloween as much as I’ve enjoyed bringing it to you.

And that’s everything for today’s post.  I hope everyone out there has a happy and safe Halloween, and that you get lots of yummy candy with cool wrappers! 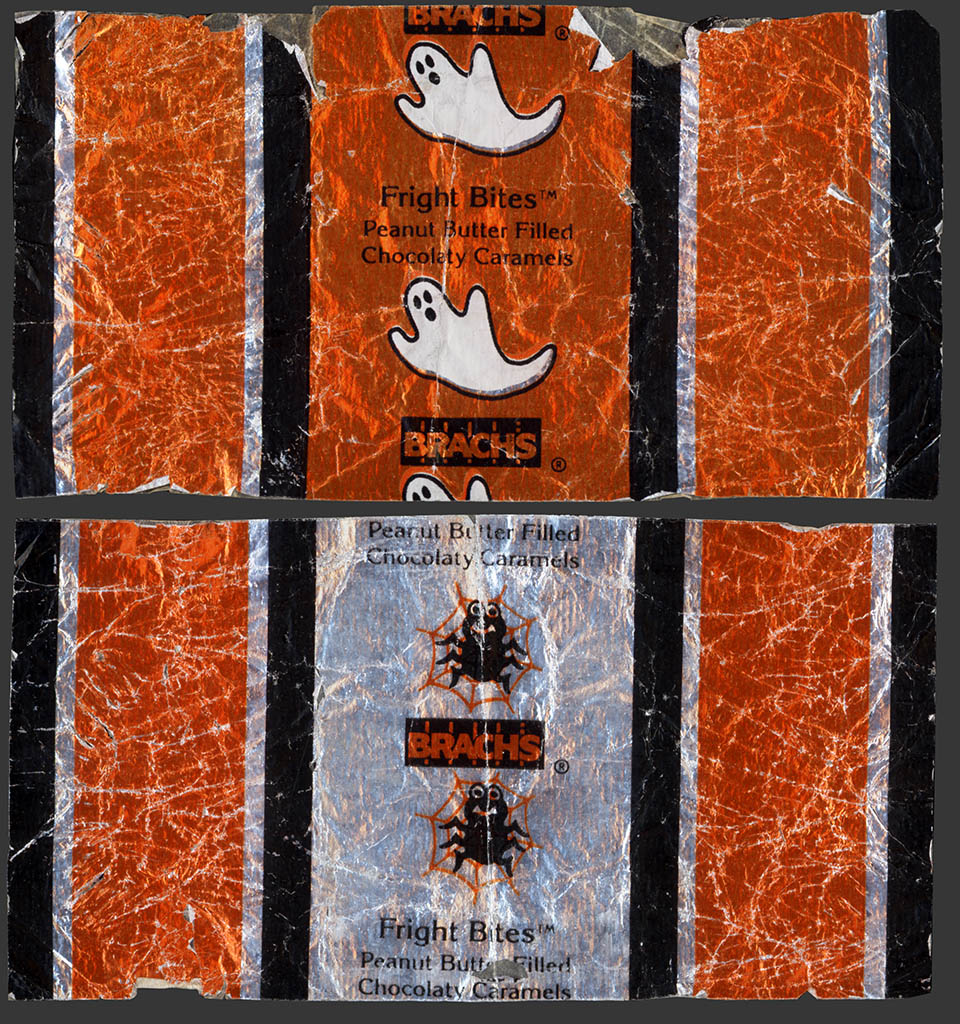 A New York City based writer, editor and sometimes actor. After spending much of the 1990′s in the comic book business helping tell the stories of Marvel Comics’ X-Men as series editor, he has since split his time between developing his own entertainment properties while still consulting and working on others. Having been described as “the Indiana Jones of lost and forgotten candy”, Jason is one of the country’s premier candy collectors and historians with his discoveries appearing in countless blogs, magazines, newspaper articles, and books. Always happy to share his knowledge and unique perspectives on this colorful part of our popular culture, Jason has consulted with New York’s Museum of Food and Drink and has also been a featured guest on Food Network’s Heavyweights, France’s M6 Capital, and New York’s TheActionRoom.com. My Google Profile+
View all posts by Jason Liebig →
This entry was posted in 1970's, Boxed, Bubble Gum, Chocolate, CountdownToHalloween, Fleer, Gum, Halloween, Hershey, Mars and tagged 1970's candy, 70's candy, candy collecting, candy collection, candy collector, candy wrapper collection, candy wrapper collector, collectible, collecting candy, confectionery, confections, Halloween, Halloween candy, packaging, sweets, vintage candy wrapper, wrapper. Bookmark the permalink.

2 Responses to My Mid-70’s Halloween Photos – All That Great Candy!