Today is the start of New York Comic Con 2012, and I’ll be attending over the next three days, so I may introduce a bit of brevity into the next few posts… if I can.   With that bit of news out of the way, let me present today’s topic: Hershey’s Halloween-inspired Kisses!

Special flavors and versions of Hershey’s Kisses have been coming out for some time, though the last ten years has seen an explosion of limited editions and exotic flavor offerings.  The first time I noticed a direct tie-in to Halloween was when I spotted Candy Corn flavored Kisses back in 2007.   My good friend Cybele of CandyBlog did a nice write up of Candy Corn Hershey Kisses at the time, and today I’ll be sharing the packaging piece I have for them in my collection: 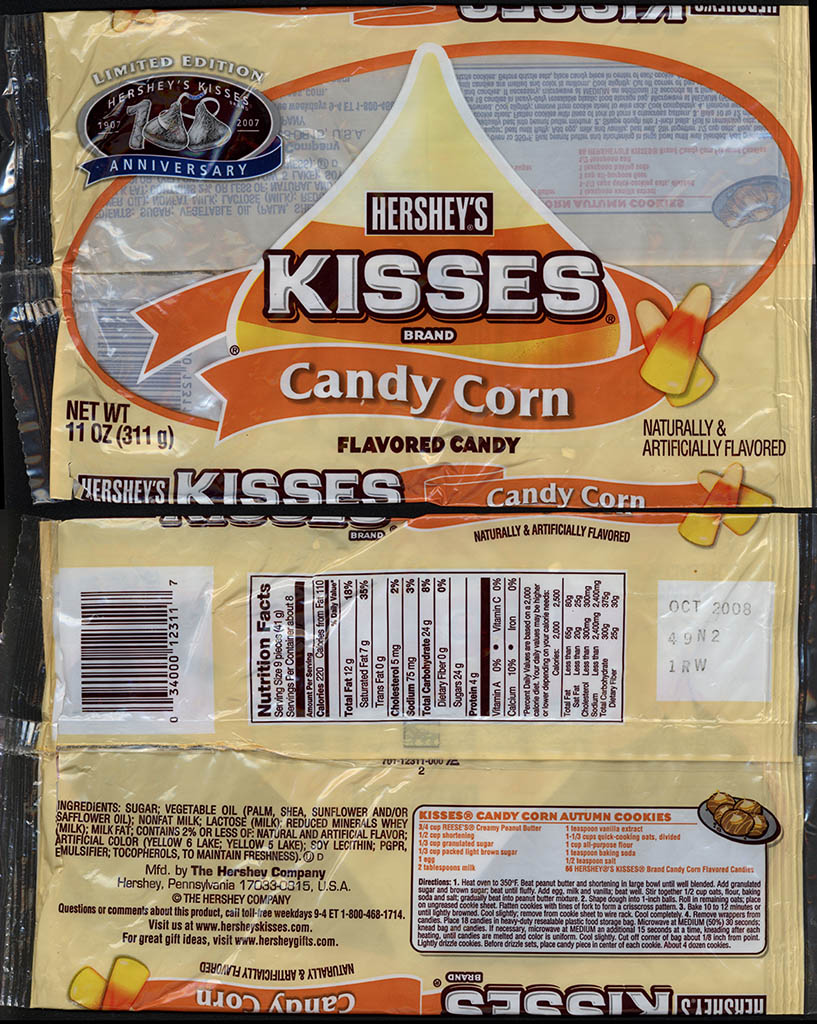 As it turned out, whatever candy corn formulation Hershey put together for those Kisses, it never really caught on.   But that didn’t scare them away from trying something special for the Halloween holiday.  The following year, Hershey unveiled Pumpkin Spice flavor Kisses, featuring a festive Halloween-themed package: 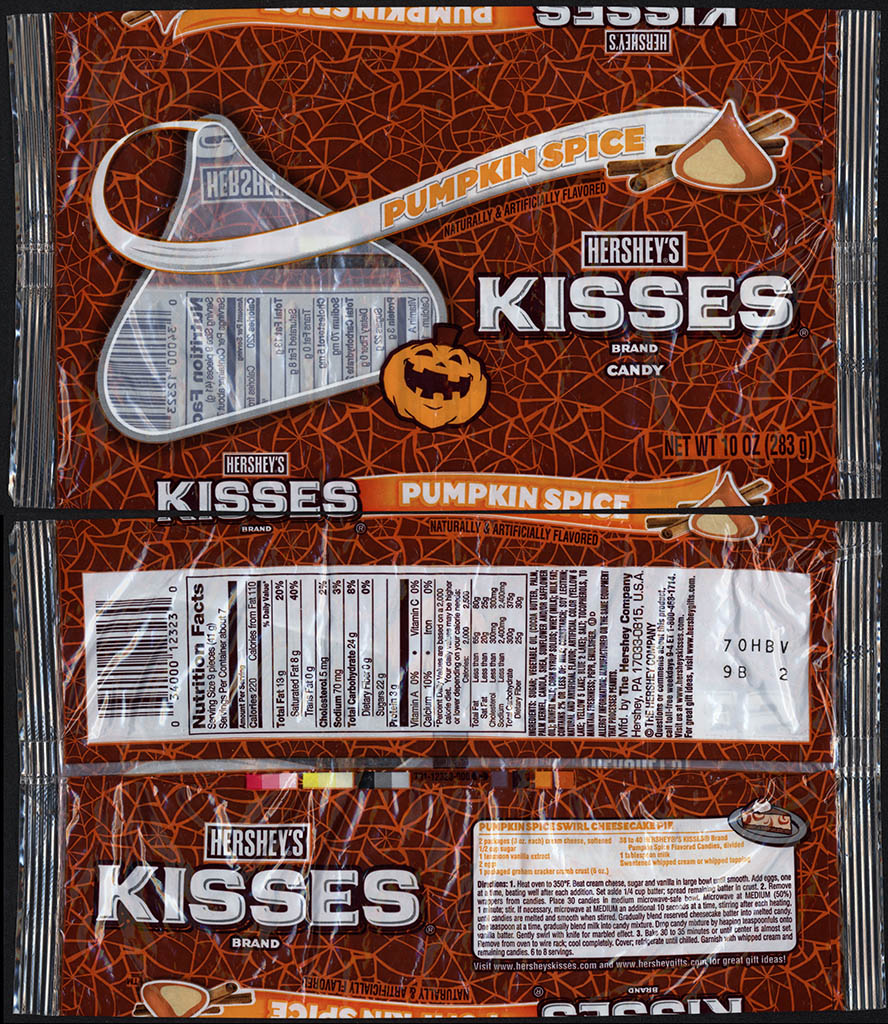 I remember buying that package of Pumpkin Spice Kisses at Target (I think they may have been Target-exclusives that first year) and I’ll admit to becoming instantly enamored with the flavor — they were great!  Fortunately this flavor caught on and has become an annual part of Hershey’s seasonal Kisses lineup.

Though they’ve become a bit of a tradition, the packaging quickly evolved.  As other products have recently started to do, Pumpkin Spice Kisses moved to a more Fall-themed packaging look, in order to avoid being clearanced out on November 1st. More and more, retailers and manufacturers are trying to find a balance between appealing to Halloween enthusiasm, while still remaining relevant further into Fall.   Here’s the package that they’ve had for the past few years: 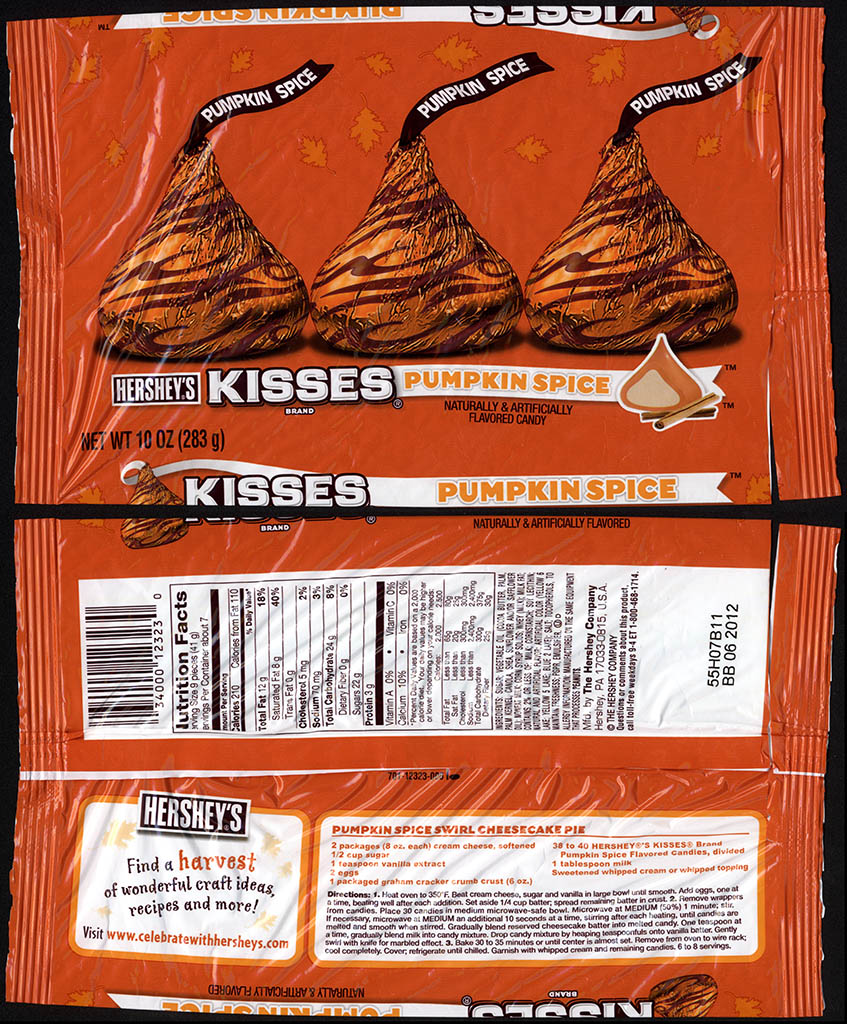 So Hershey didn’t find their Halloween Kisses sweet spot right away, but they eventually did get it with their pumpkin spice flavor.   Maybe with the recent success of Candy Corn M&M’s and Candy Corn Oreo’s, they’ll take another crack at a reformulated Candy Corn Hershey’s Kiss.  You never know!

A New York City based writer, editor and sometimes actor. After spending much of the 1990′s in the comic book business helping tell the stories of Marvel Comics’ X-Men as series editor, he has since split his time between developing his own entertainment properties while still consulting and working on others. Having been described as “the Indiana Jones of lost and forgotten candy”, Jason is one of the country’s premier candy collectors and historians with his discoveries appearing in countless blogs, magazines, newspaper articles, and books. Always happy to share his knowledge and unique perspectives on this colorful part of our popular culture, Jason has consulted with New York’s Museum of Food and Drink and has also been a featured guest on Food Network’s Heavyweights, France’s M6 Capital, and New York’s TheActionRoom.com. My Google Profile+
View all posts by Jason Liebig →
This entry was posted in CountdownToHalloween, Halloween, Hershey, Holiday and tagged candy collecting, candy collection, candy collector, candy wrapper collection, candy wrapper collector, collectible, collecting candy, confectionery, confections, Halloween candy, Halloween Kisses, Hershey Kisses, holiday candy, packaging, sweets, vintage candy wrapper, wrapper. Bookmark the permalink.