The Return of Lem and Mel & Cherri and Bubb!

Today I get to herald the return of a pair of Just Born treats from the early 1990’s;  Lem and Mel, and Cherri and Bubb.   After nearly two decades off the shelves these tasty treats are back, so today we’re going to take a look at these new retro boxes and the originals they’re based on.

Launched in 1989, Cherri and Bubb was the first flavor extension to the Just Born panned-candy family following the 1987 line-wide package redesign.  Here’s a Cherri and Bubb box front from that period, courtesy of fellow collector Darlene Lacey, of CandyWrapperMuseum.com:

Since I don’t have an original Cherri and Bubb in my collection (it’s on my want-list), it was especially fun to pick up the new retro-box version just released.

It’s interesting that the mascots have changed in a few notable ways.  Cherri has changed from a masculine mascot with ball cap into a more clearly-feminine version.  Bubb on the other hand, has gone mostly unchanged, though he has received a pair of pants on the 2012 box. 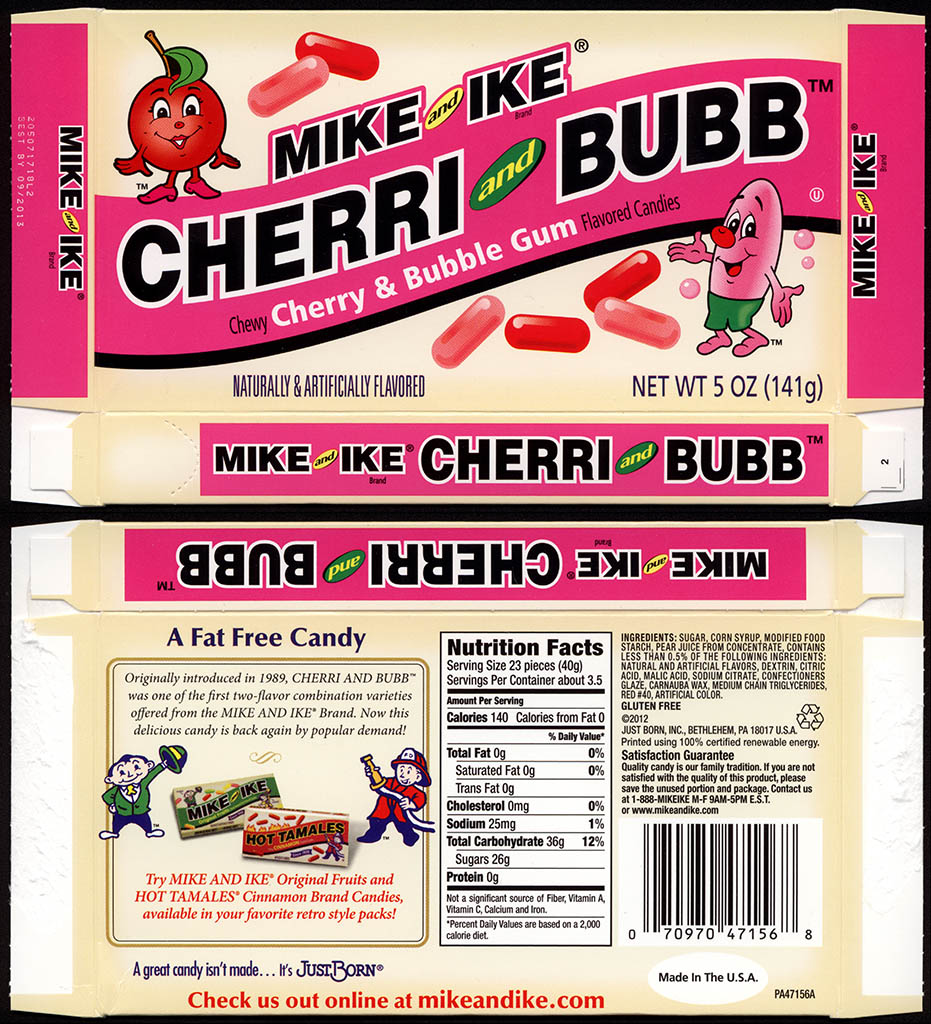 While the cherry flavor has made its way into other Mike and Ike mixes over the years, the bubble gum flavor has been missing for a generation – so it’s great to be able to sample this candy again.  It’s just as tasty as I remember.

Next up, we’ll take a look at Lem and Mel.   Launched in 1991, Lem and Mel launched alongside Strawbanana and joined the expanded line of Just Born products, which included Cherri and Bubb.  I’m fortunate to have an original box in my collection, and here it is: 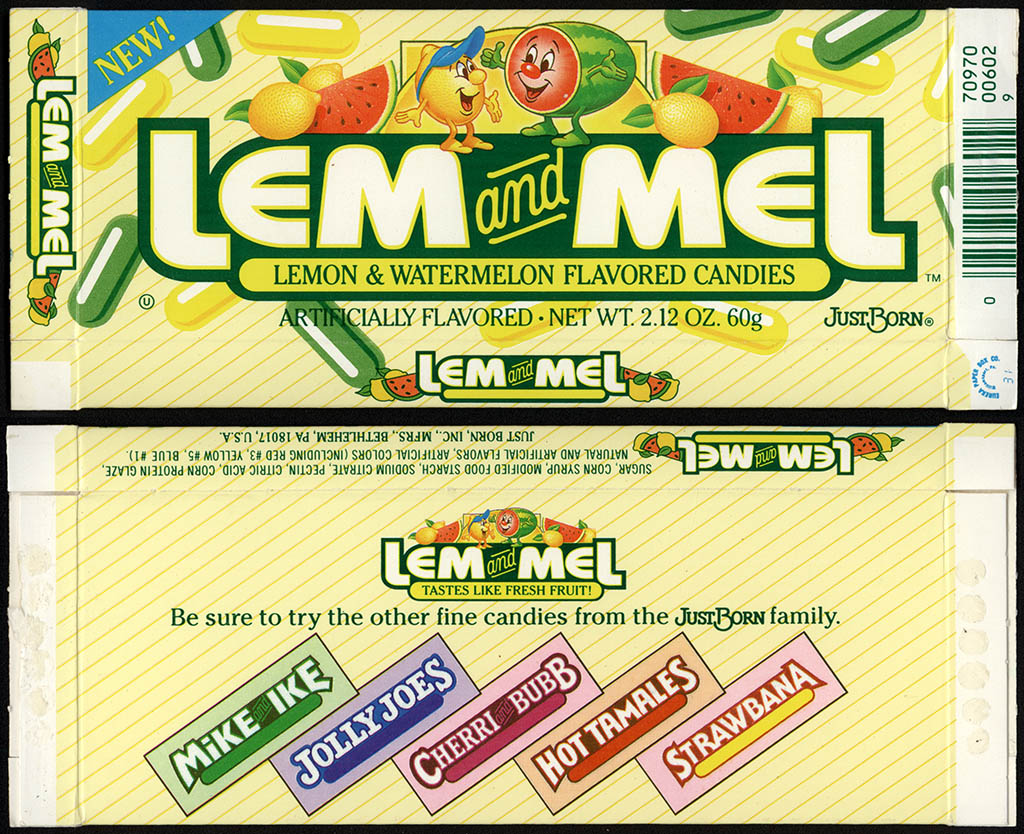 For contrast and comparison, here’s the new retro-box version of Lem and Mel.  [You’ll note the mascots remain largely the same here, though the blue visor has changed to a ball cap and been passed from Lem to Mel on the new box.]:

As with Cherri and Bubb, it’s great to have the Lem and Mel flavor mix back on shelves again.  As a collector, it’s fun to be able to pick up these great retro-inspired mascot boxes, too.

I hope that these are a big sales success and that they lead to more retro releases of Just Born’s other forgotten favorites.  Flavors like Strawbanana, Cool Kids, and even their root beer flavored Root-T-Toot candies — I’m crossing my collector fingers we get to see more.

Before I wrap up today, I wanted to share two related ads: 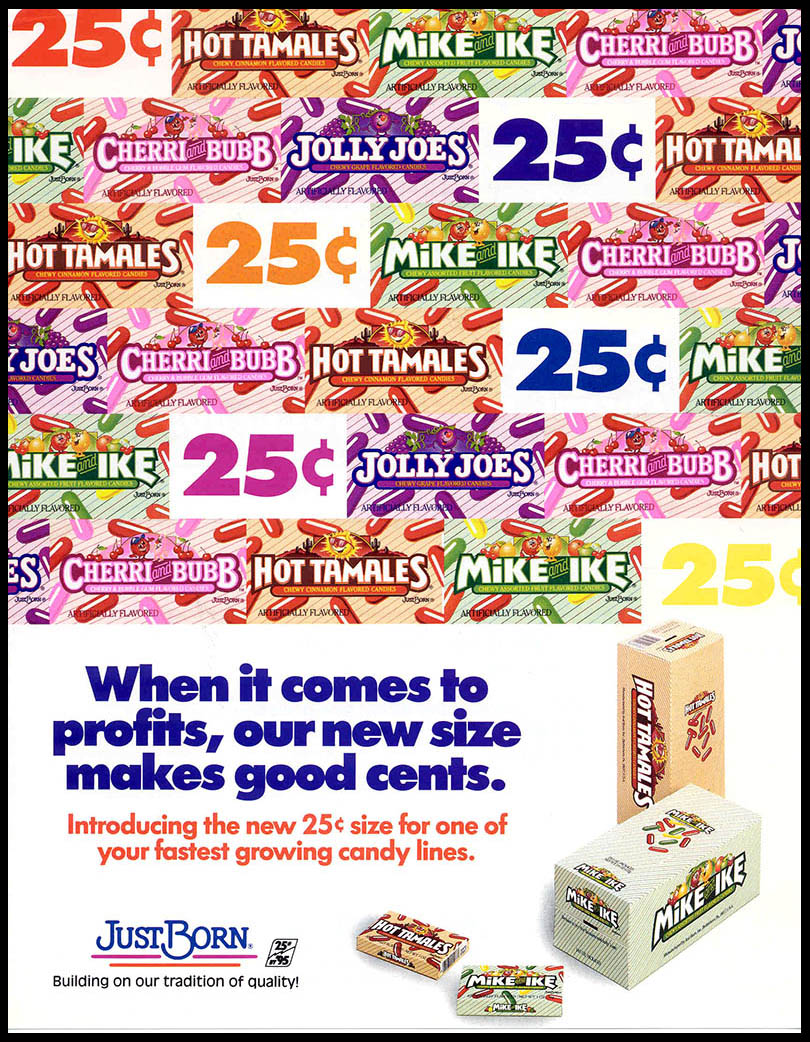 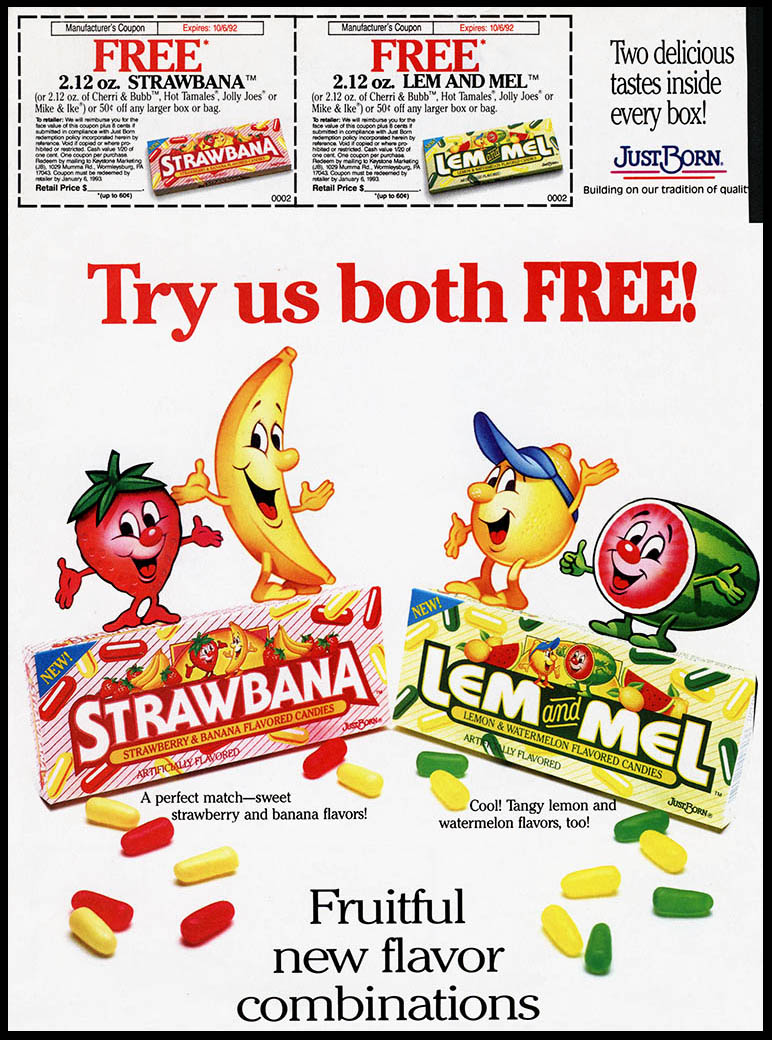 And that’s everything we have today on the wonderful return of Lem and Mel, and Cherri and Bubb.  You should start finding these on store shelves right now.  They’re already available to order directly from Just Born if you can’t wait to find them.

A New York City based writer, editor and sometimes actor. After spending much of the 1990′s in the comic book business helping tell the stories of Marvel Comics’ X-Men as series editor, he has since split his time between developing his own entertainment properties while still consulting and working on others. Having been described as “the Indiana Jones of lost and forgotten candy”, Jason is one of the country’s premier candy collectors and historians with his discoveries appearing in countless blogs, magazines, newspaper articles, and books. Always happy to share his knowledge and unique perspectives on this colorful part of our popular culture, Jason has consulted with New York’s Museum of Food and Drink and has also been a featured guest on Food Network’s Heavyweights, France’s M6 Capital, and New York’s TheActionRoom.com. My Google Profile+
View all posts by Jason Liebig →
This entry was posted in 1980's, 1990's, Boxed and tagged 1990's candy, 90's candy, candy collecting, candy collection, candy collector, candy wrapper collection, candy wrapper collector, collectible, collecting candy, confectionery, confections, Just Born, Just Born candy, Mike and Ike, packaging, panned candy, sweets, vintage candy wrapper, wrapper. Bookmark the permalink.

6 Responses to The Return of Lem and Mel & Cherri and Bubb!