I’ve always looked at Cracker Jack as more of a snack food than a confectionery product, but it really is a confection.  Because of that, on it’s own it could be considered a legitimate topic for CollectingCandy.

Recently however, a wrapper surfaced from the early part of the 20th Century which provides a direct link between Cracker Jack and classic wrapped candies.  It’s one I never knew existed.

Produced by the Cracker Jack Company of Chicago, Sailor Boy penny candy was a wrapped treat sold in the 1930’s.  The wrapper features the classic Cracker Jack sailor boy mascot and dog, holding a box of Cracker Jacks.  Here’s the wrapper:

That Sailor Boy wrapper is a pretty great piece of confectionery history, because it firmly ties the world and history of Cracker Jack together with that of standard wrapped candy.

Even before this discovery I’d been interested in Cracker Jack packaging and picked up a number of interesting pieces over the years.  I’m going to take this opportunity to share a number of them today.  So let’s get to it.

First, a couple oddball pieces that diverged from the standard Cracker Jack formula.  This is a package for Cracker Jack Popping Corn: 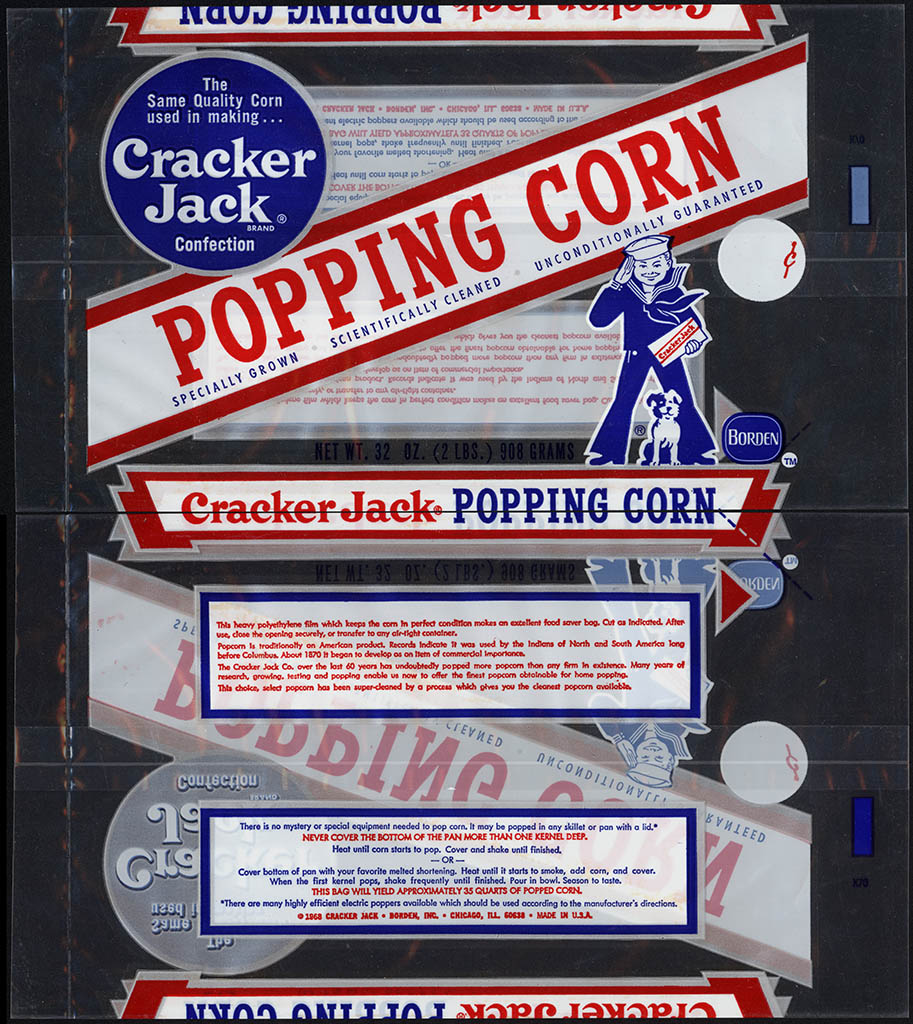 And here is the second version box design used for a 1980’s Cracker Jack branded cereal: 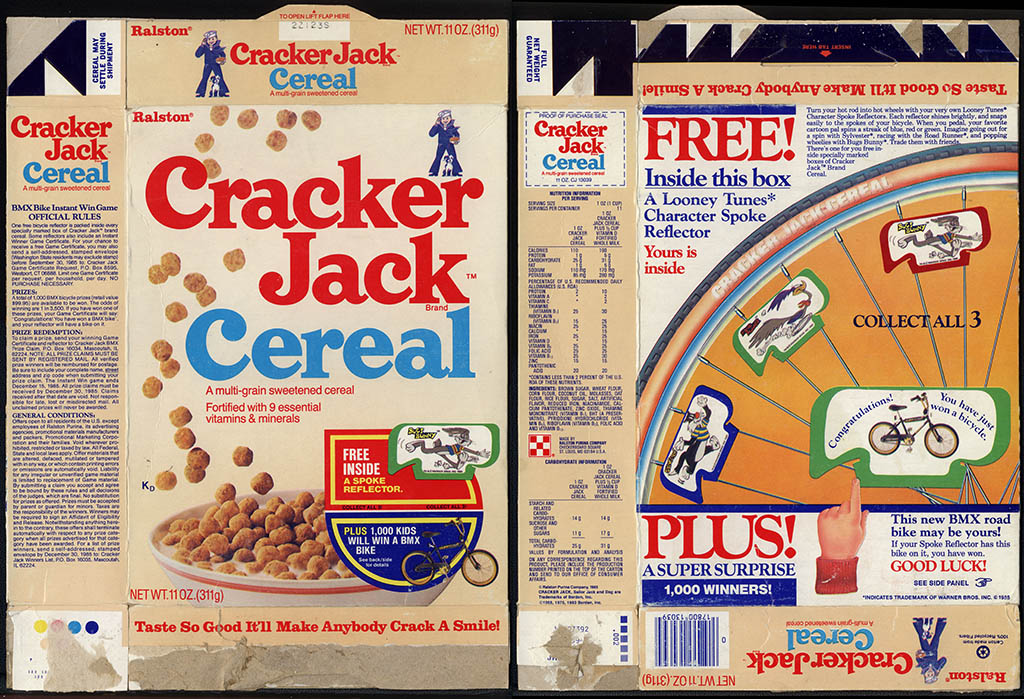 And here’s the look of the cereal box from its initial release: 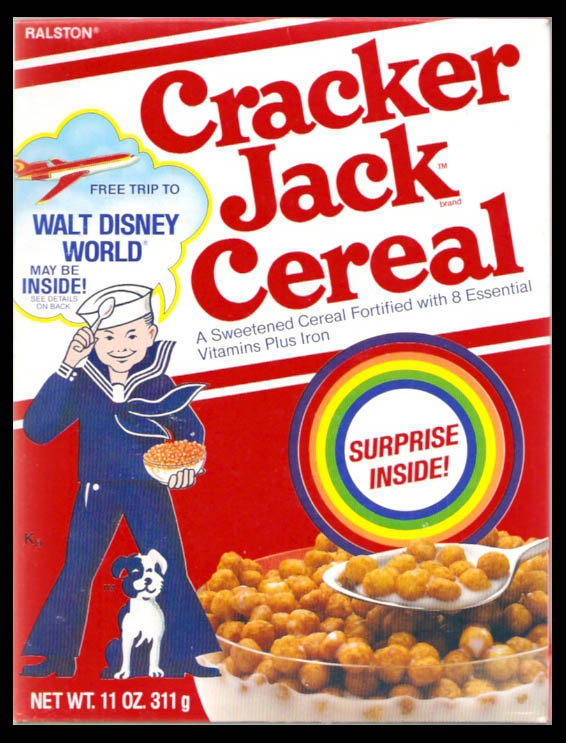 Now onto some actual Cracker Jack: 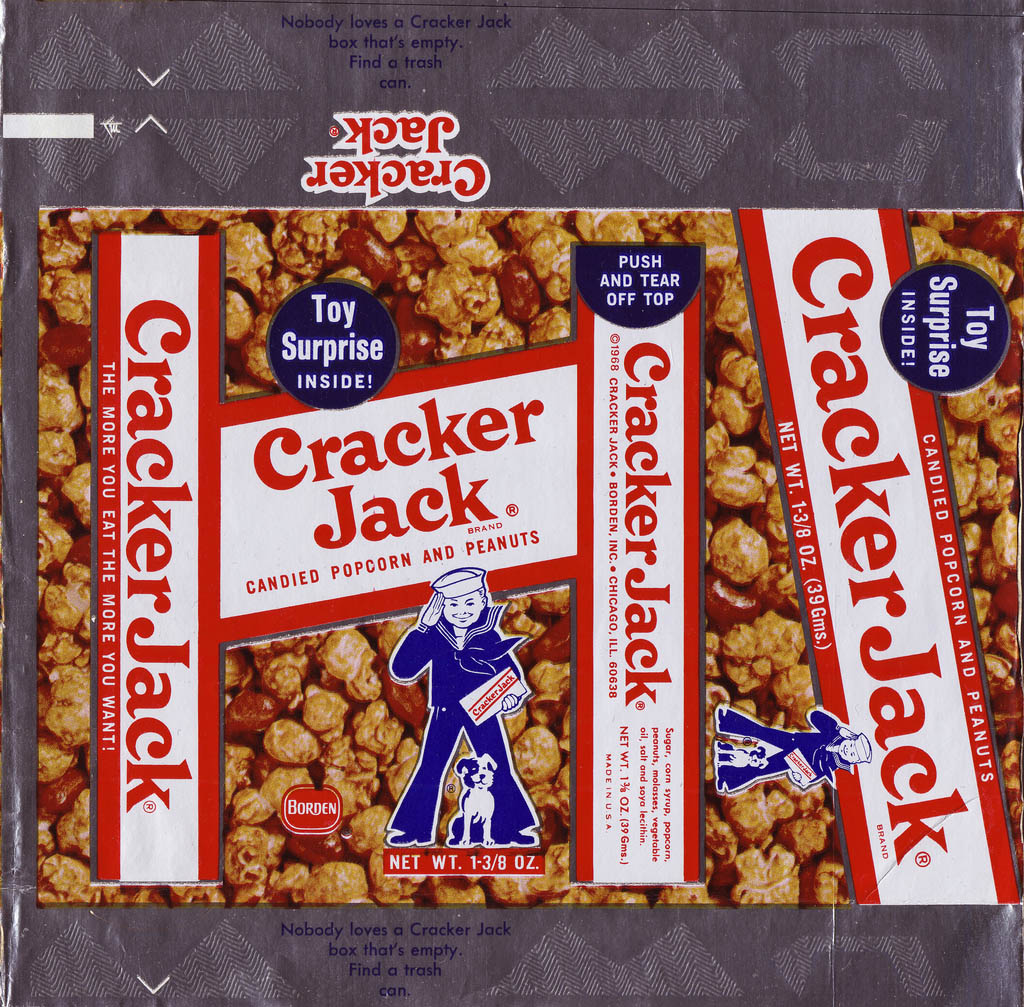 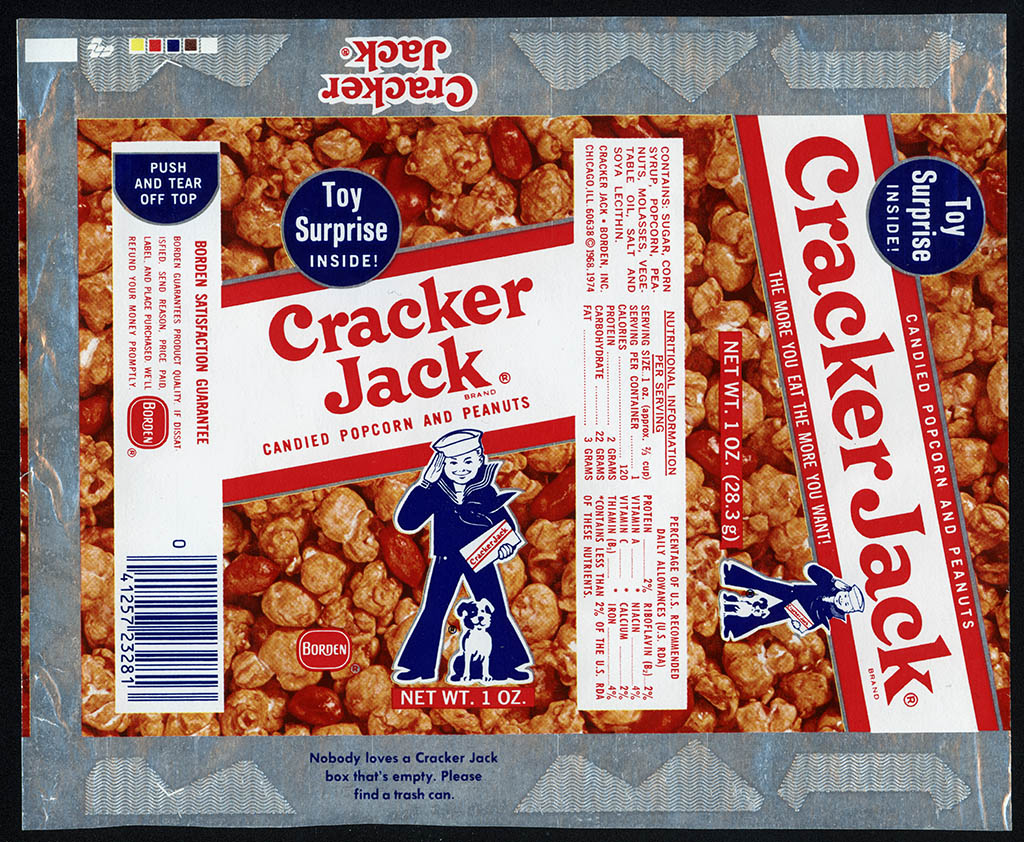 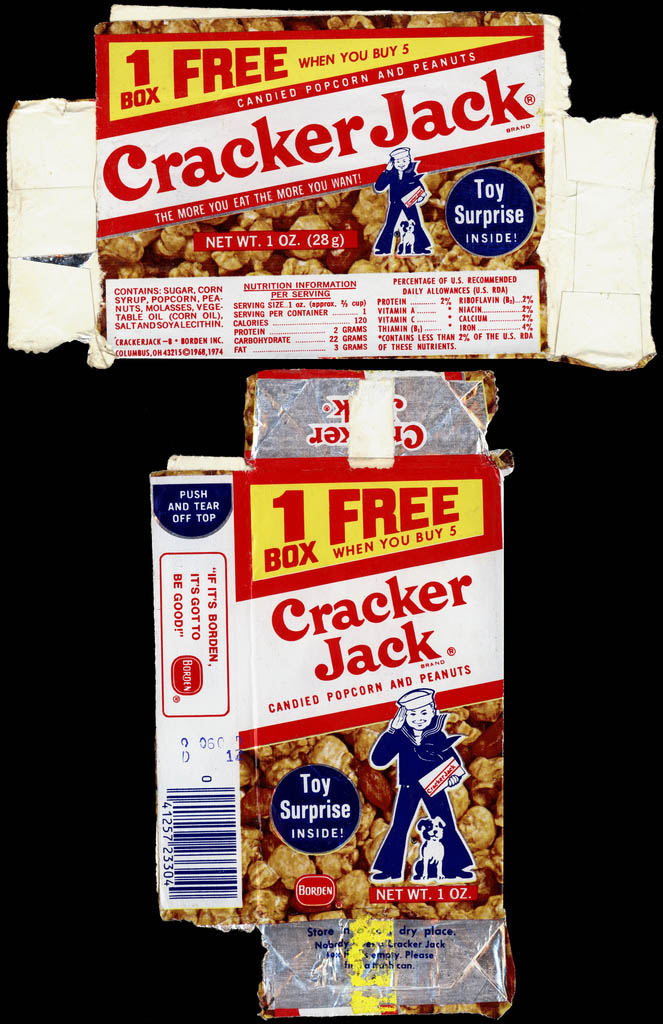 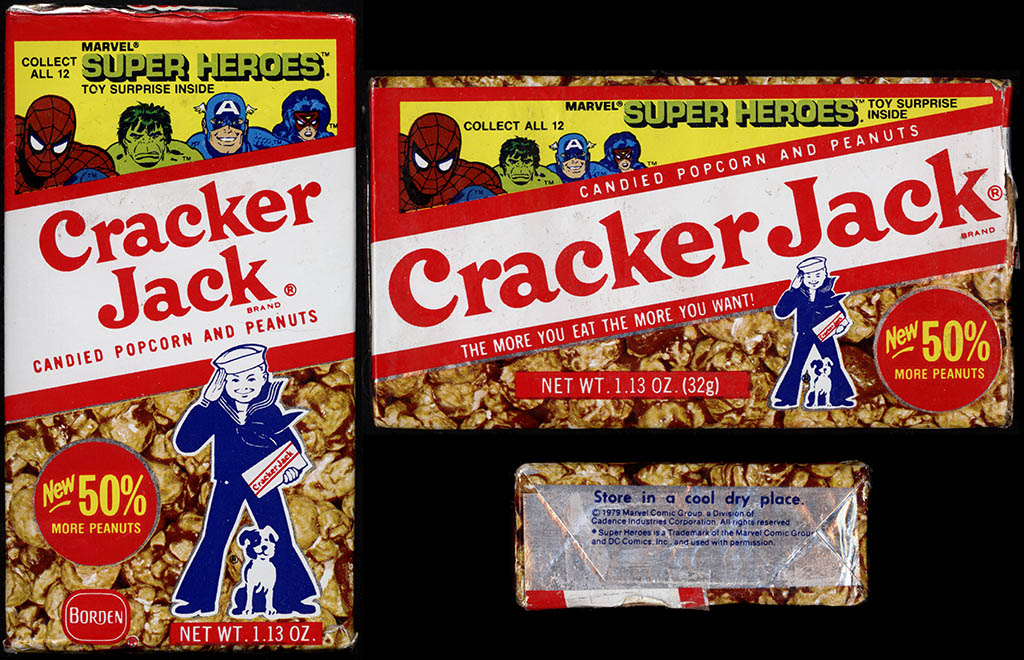 In the 1980’s, Cracker Jack would get a run of nostalgic packaging, each one telling the story of the history of the brand: 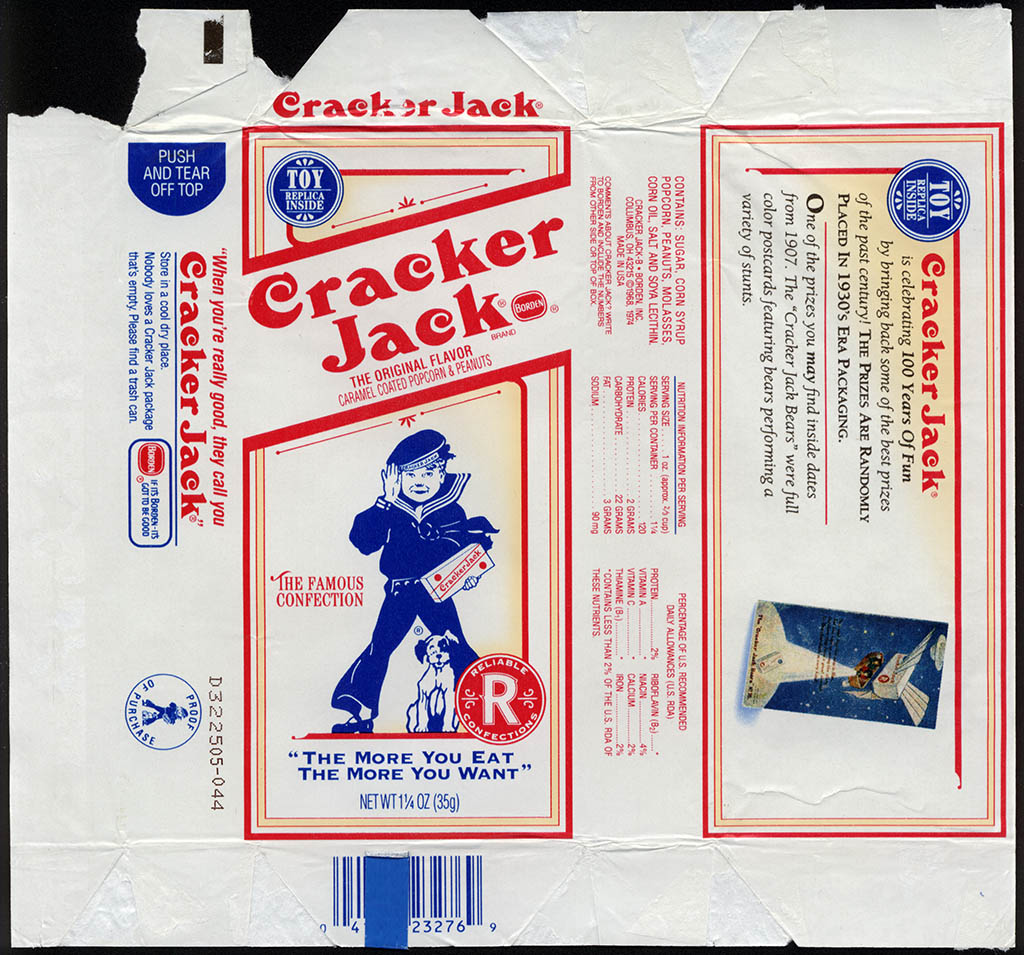 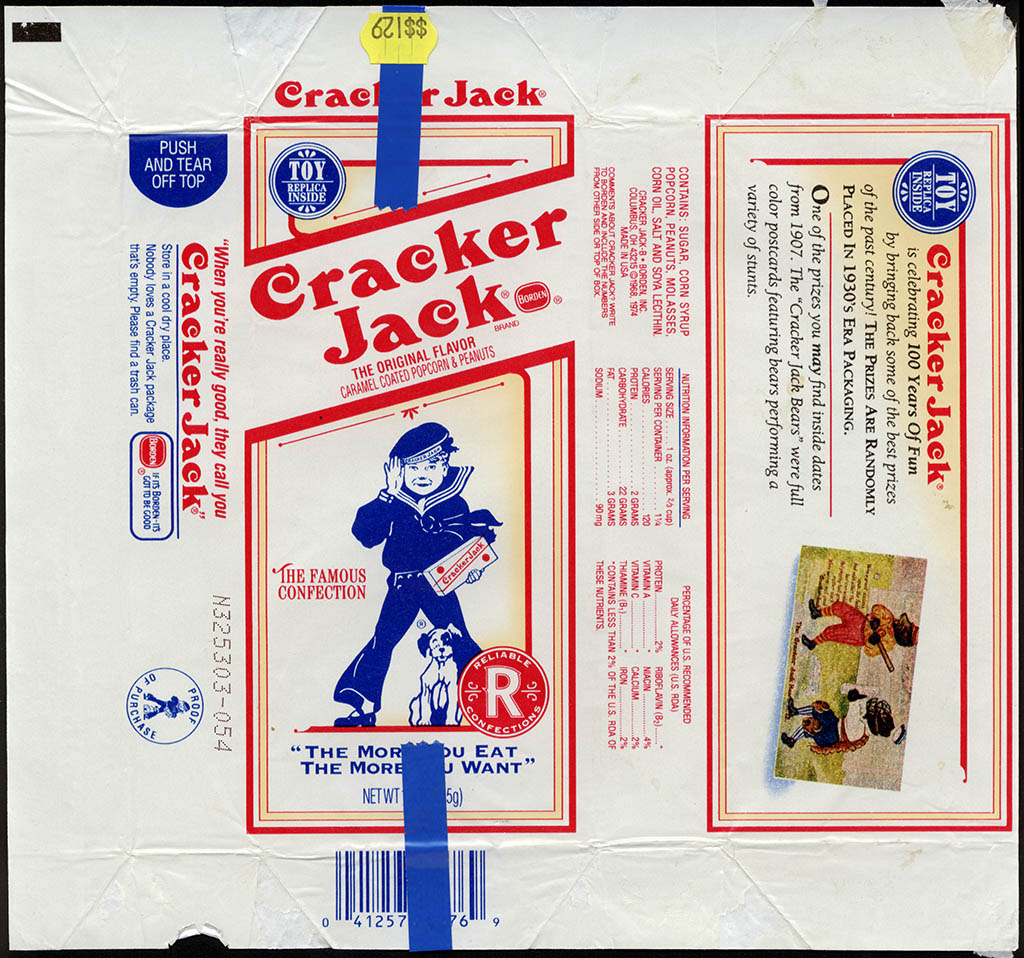 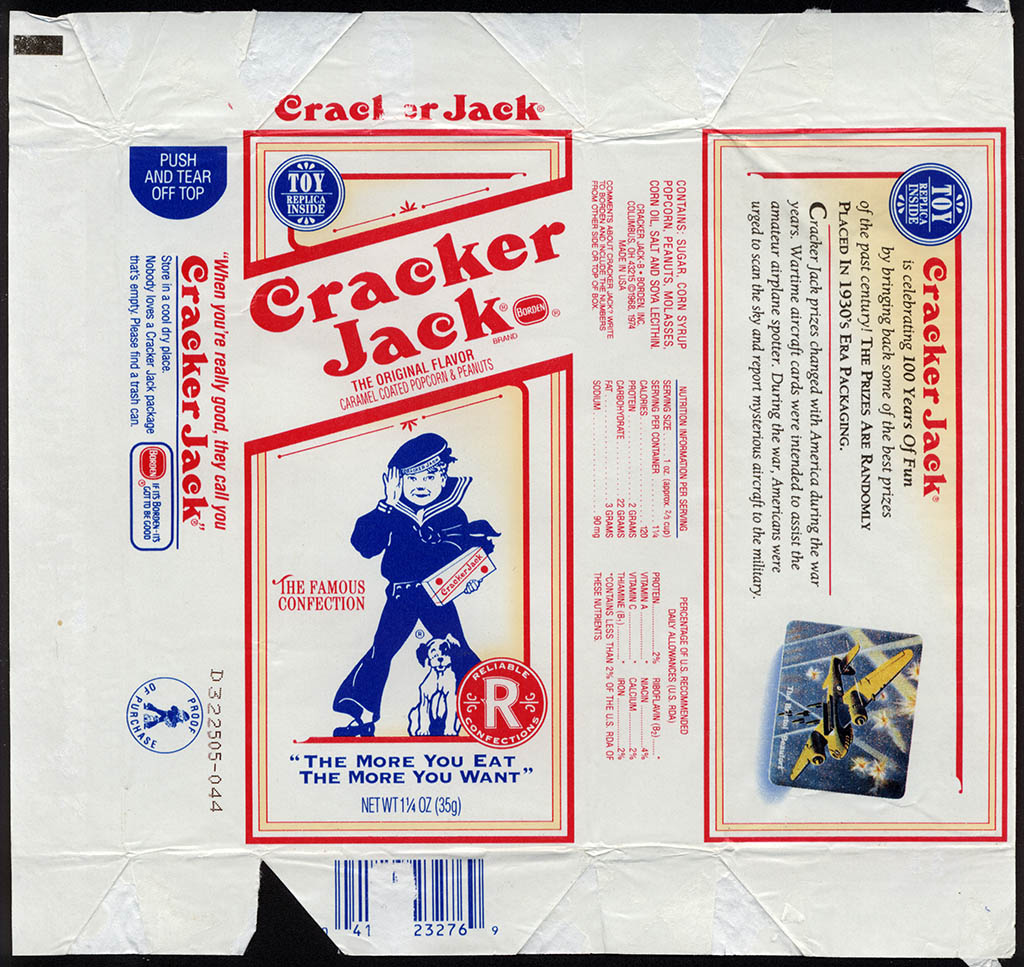 There was also a short-lived flavor-extension for Cracker Jack that was released in the early 1990’s: 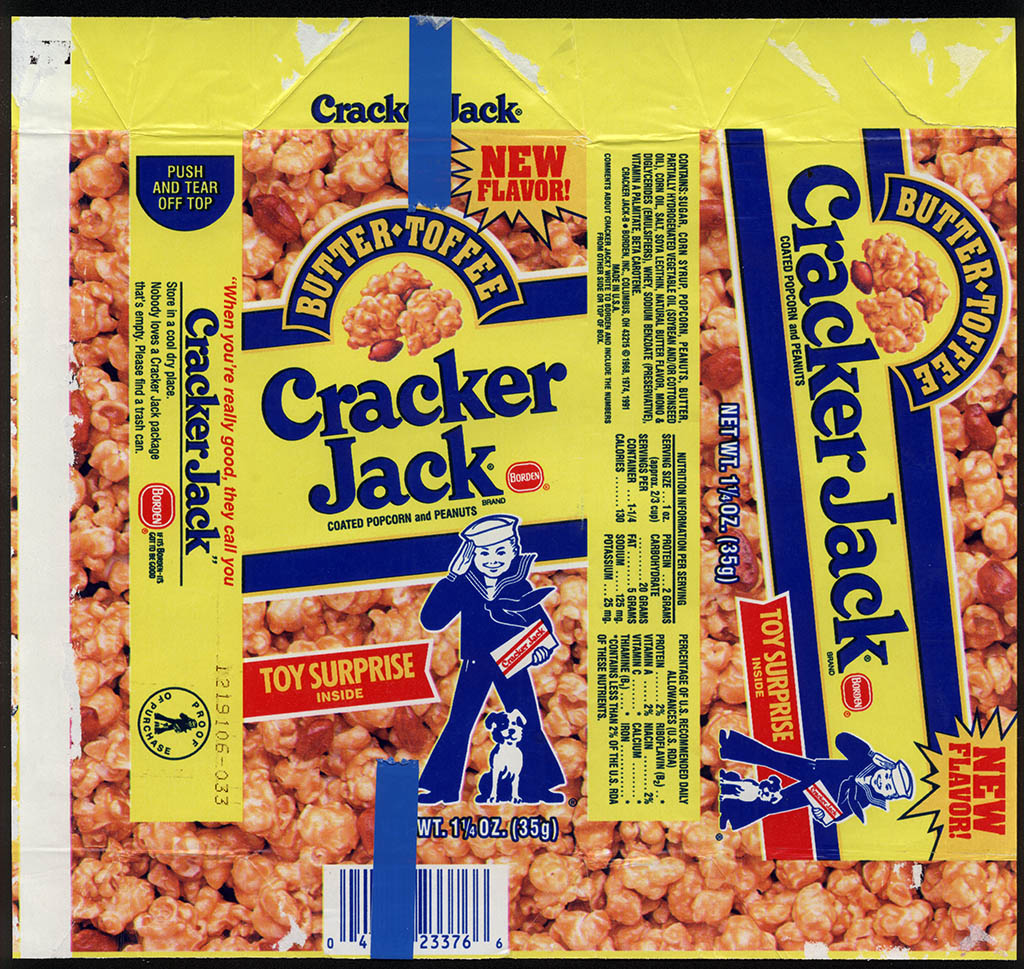 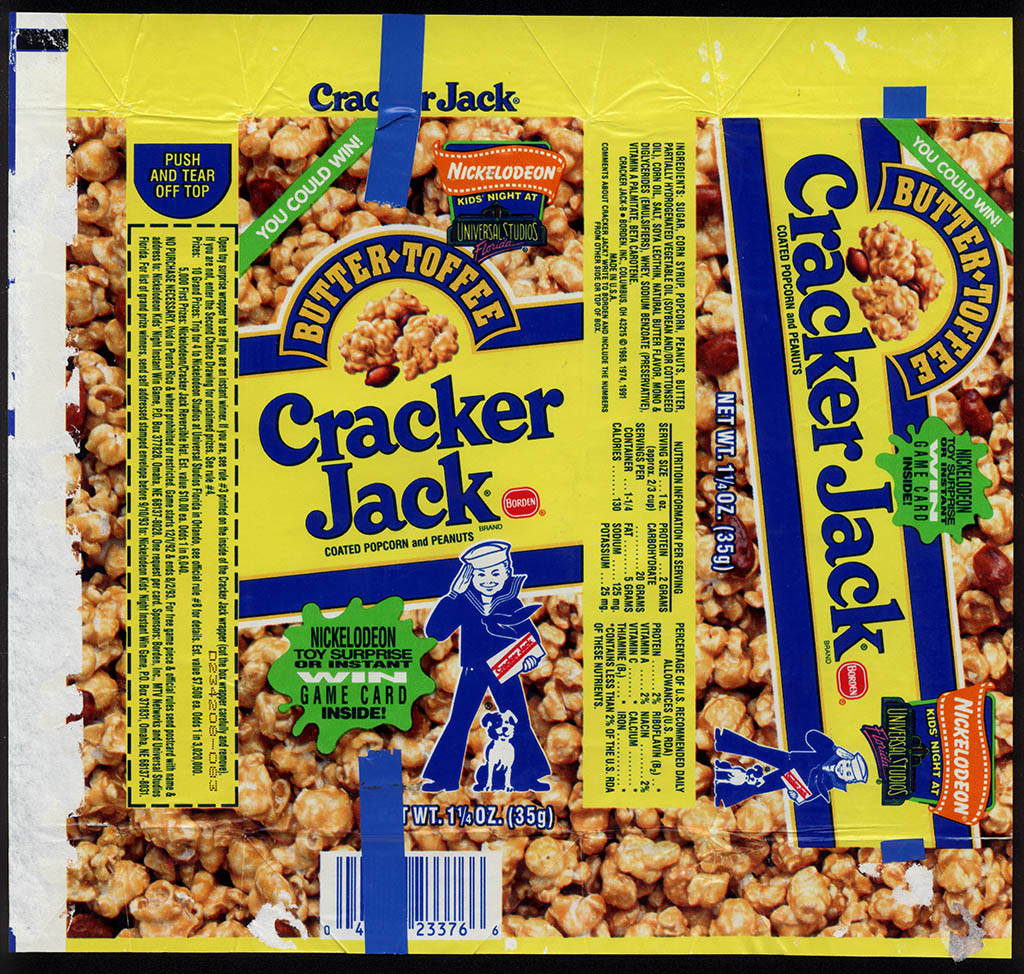 Borden continued to produce Cracker Jack with its classic design well into the 1990’s. 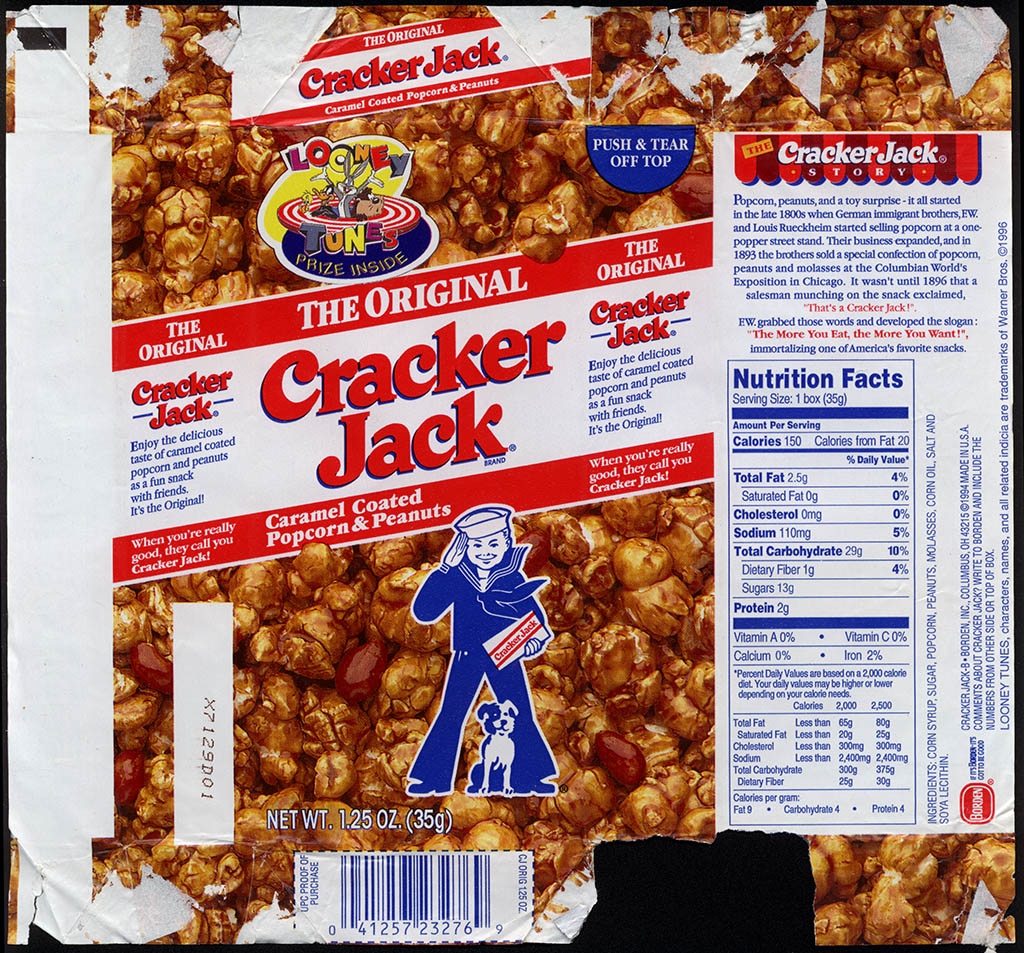 In late 1996, Borden would take their classic mascot illustration and give it a significant update with this look: 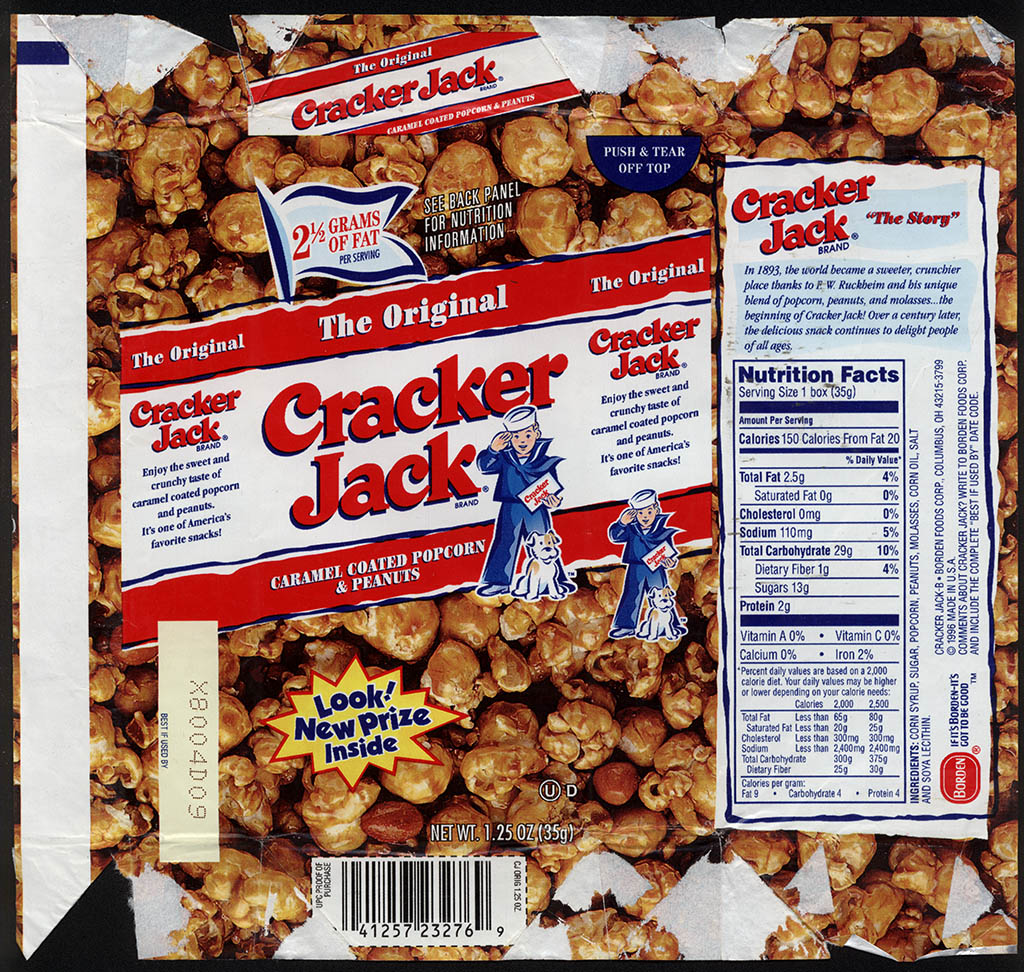 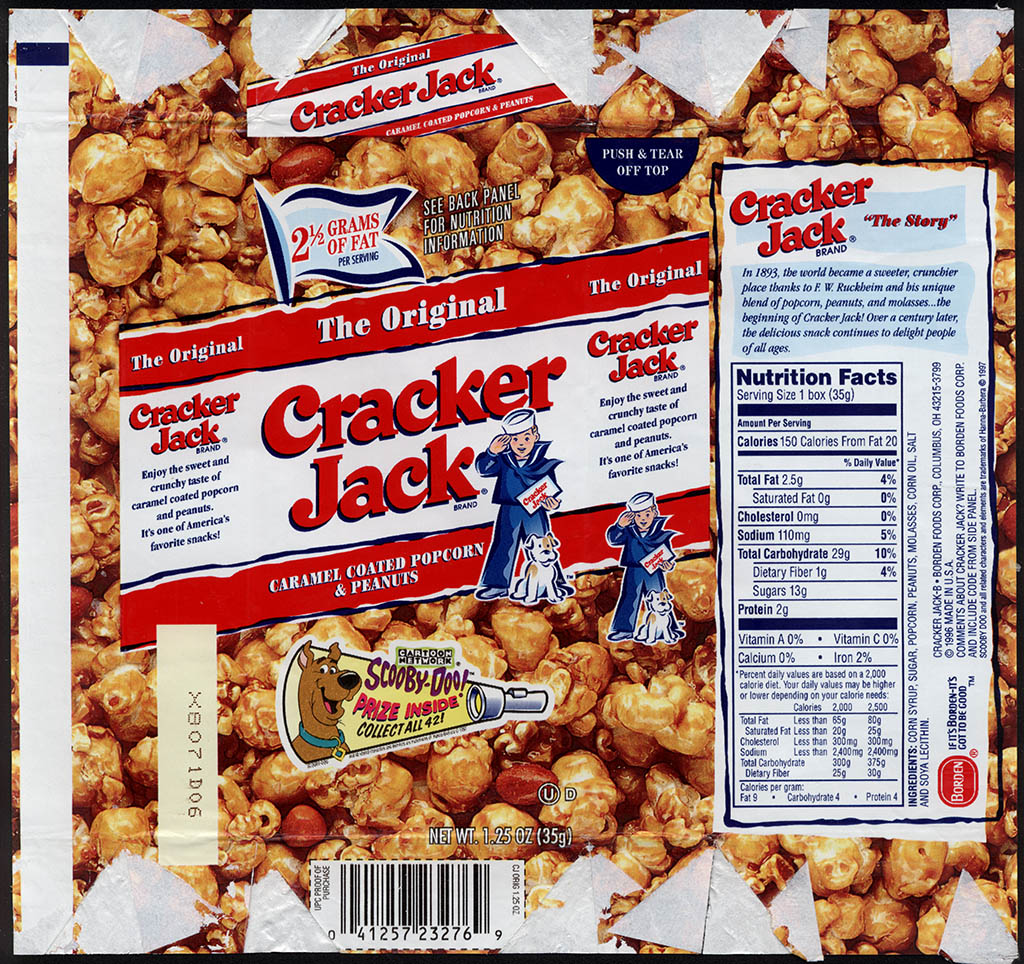 In 1998, another major change for the Cracker Jack brand occurred when Frito-Lay took ownership of it, as you can see here: 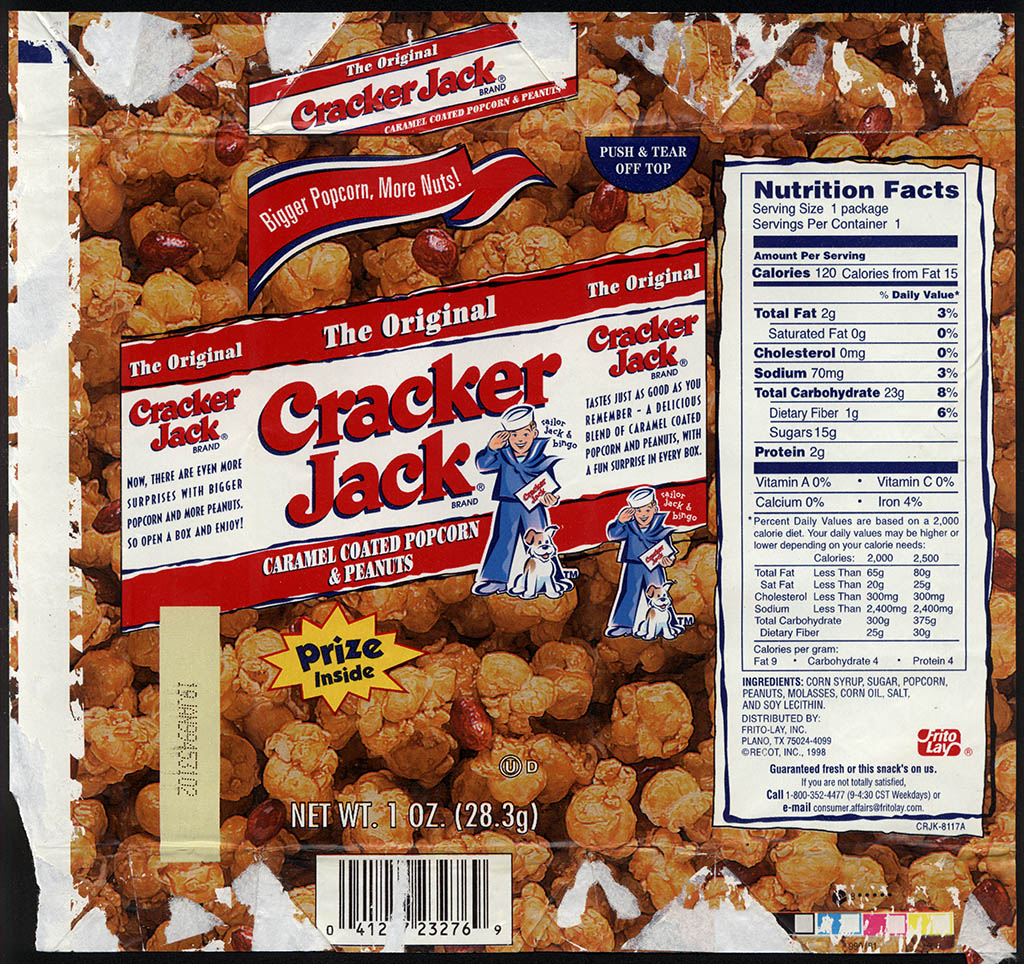 Cracker Jack has been a part of the Frito-Lay family since 1998, and remains so today.

Frito-Lay had experimented around with some exotic flavor extensions like green apple flavored Cracker Jack, but I’ve not yet been able to track any of those down yet.  But when I do, I’ll come back and write about them here on the site.

So for today, that’s everything I’ve got to share on this wonderful confectionery classic.

A New York City based writer, editor and sometimes actor. After spending much of the 1990′s in the comic book business helping tell the stories of Marvel Comics’ X-Men as series editor, he has since split his time between developing his own entertainment properties while still consulting and working on others. Having been described as “the Indiana Jones of lost and forgotten candy”, Jason is one of the country’s premier candy collectors and historians with his discoveries appearing in countless blogs, magazines, newspaper articles, and books. Always happy to share his knowledge and unique perspectives on this colorful part of our popular culture, Jason has consulted with New York’s Museum of Food and Drink and has also been a featured guest on Food Network’s Heavyweights, France’s M6 Capital, and New York’s TheActionRoom.com. My Google Profile+
View all posts by Jason Liebig →
This entry was posted in 1960's, 1970's, 1980's, 1990's, Boxed. Bookmark the permalink.