Heide’s Chocolate Babies – A Look Back at a Forgotten Favorite!

Today I’d like to look at an old-fashioned treat that’s not easy to find these days, but one that’s had some groovy packaging along the way:  Heide’s Chocolate Babies.

For those that are too young to remember Chocolate Babies, they were the consistency of candy corn, but with a chocolate flavor.  They were molded roughly in the shape of swaddled infants, though to me that was always up for interpretation.

The earliest I can track Heide’s Chocolate Babies back to is the 1940’s, and this entry in a candy trade sales catalog.  Here you can see them in a bright blue box, with what looks like a graphic of the candy on some kind of table doily, circa 1949:

The earliest Heide Chocolate Babies box I have in my collection dates back to the early 1970’s, and would have likely been that first version I encountered in my youth.  By this time, the box would have its distinctive orange color scheme, though in many ways it was still quite similar in design to the 1949 style box: 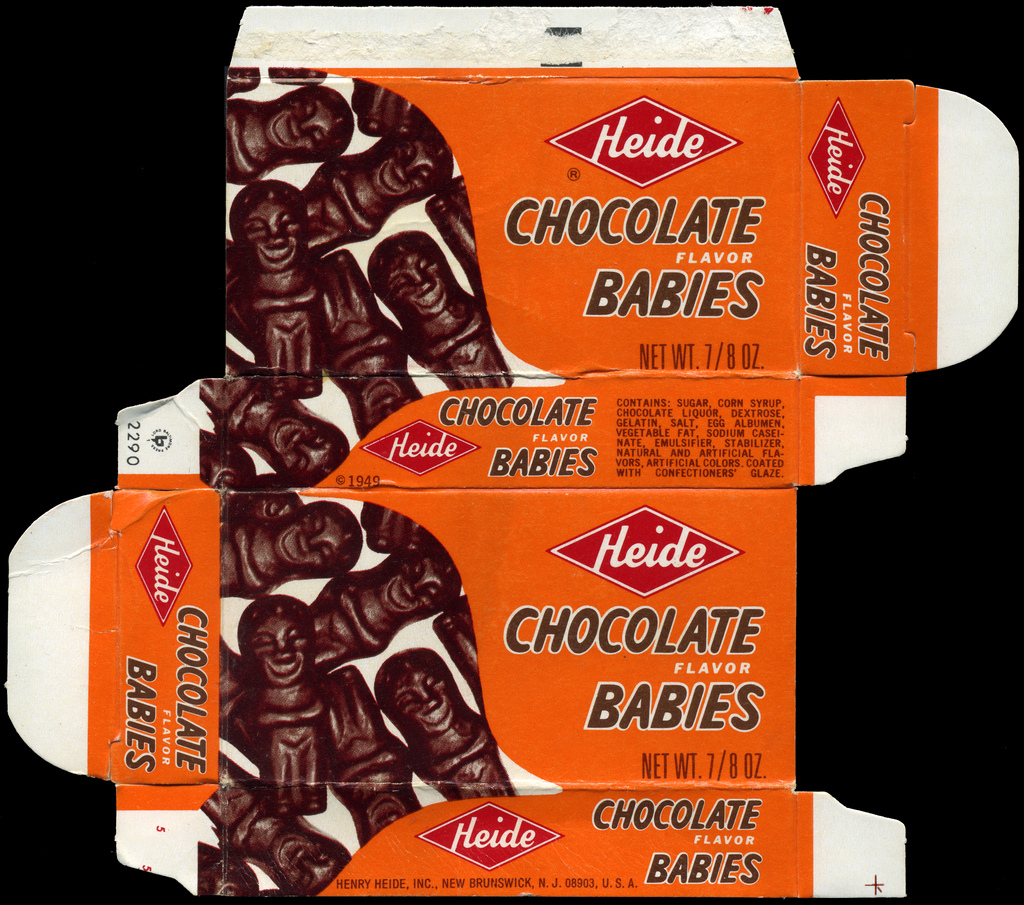 The next evolutions of the box design followed the rest of the Heide line.  In the later 70’s, the boxes had a more stark look, with a strong typeface for the logo and only two illustrated pieces of candy shown: 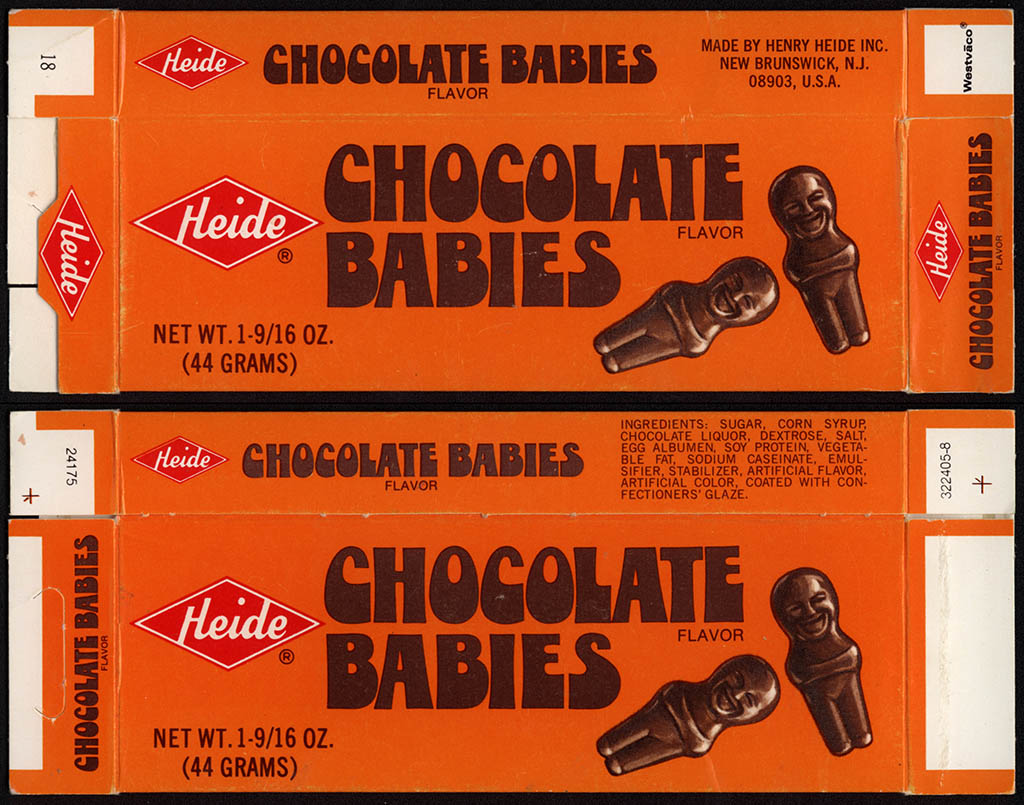 The 1980’s were likely the last decade to see Chocolate Babies sold in individually-for-sale boxes.   As before, the design followed the rest of the Heide line that now featured a cool “wave” logo and an illustrated mascot.  This is the latest example of Chocolate Babies box I have in my collection: 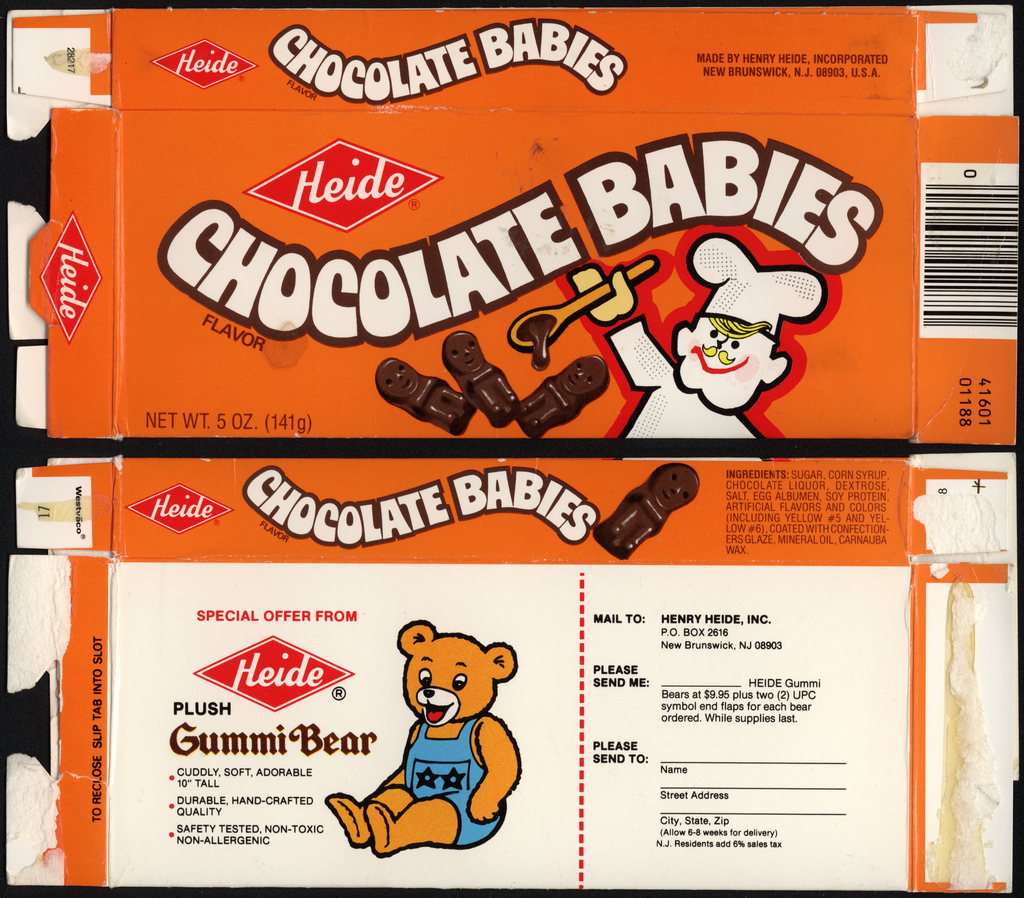 My guess is that as the 1990’s arrived, Chocolate Babies had fallen out of favor with consumers, and individual boxed sales ended.  Even so, today Chocolate Babies continue to be produced as a bulk item and are still available from a few online outlets (they’re currently produced by Necco).

And that’s everything I’ve got on this look back at Heide’s Chocolate Babies.  I hope you enjoyed it, and I’ll see you next time!

A New York City based writer, editor and sometimes actor. After spending much of the 1990′s in the comic book business helping tell the stories of Marvel Comics’ X-Men as series editor, he has since split his time between developing his own entertainment properties while still consulting and working on others. Having been described as “the Indiana Jones of lost and forgotten candy”, Jason is one of the country’s premier candy collectors and historians with his discoveries appearing in countless blogs, magazines, newspaper articles, and books. Always happy to share his knowledge and unique perspectives on this colorful part of our popular culture, Jason has consulted with New York’s Museum of Food and Drink and has also been a featured guest on Food Network’s Heavyweights, France’s M6 Capital, and New York’s TheActionRoom.com. My Google Profile+
View all posts by Jason Liebig →
This entry was posted in 1970's, 1980's, Chocolate, Novelty and tagged candy collecting, candy collection, candy collector, candy wrapper collection, candy wrapper collector, collectible, collecting candy, confectionery, confections, Heide candy, Necco, packaging, sweets, vintage candy wrapper, wrapper. Bookmark the permalink.

7 Responses to Heide’s Chocolate Babies – A Look Back at a Forgotten Favorite!