The Colorful and Wacky World of Candy Machine Insert Cards!

Today I’m going to cover a fun topic, but one that I don’t spend too much time on as a collector – vending machine insert cards.  These are illustrated and typically-colorful cardboard inserts that are put in the fronts of gumball machines to entice kids to part with their change, in exchange for the goodies they offer.

Though I don’t personally put much focus on vending cards, I believe a person could devote an entire hobby to the pursuit of them alone.  These are wonderful and varied pieces that span decades and are awfully fun to examine.

Unlike so much of modern candy and gum packaging, vending cards are still rich with fun mascots and colorful creatures.  For today, I’ll be focusing on the handful of vintage vending cards I’ve picked up as a collector.

One of the things I love about vending machine cards, and vending machines in general, is that while they alter their marketing to reach new consumers, so much about them hasn’t changed in decades.  I feel like I still see machines in front of shops that look pretty much like the ones in this photo from 1969: 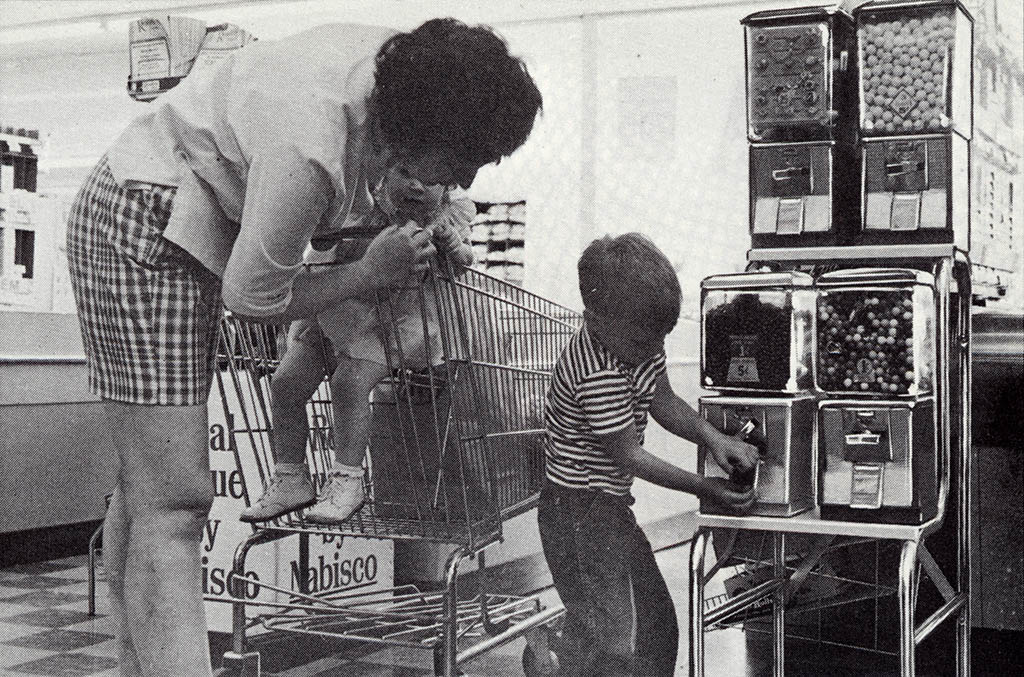 Vending Machines at the grocery store – circa 1969 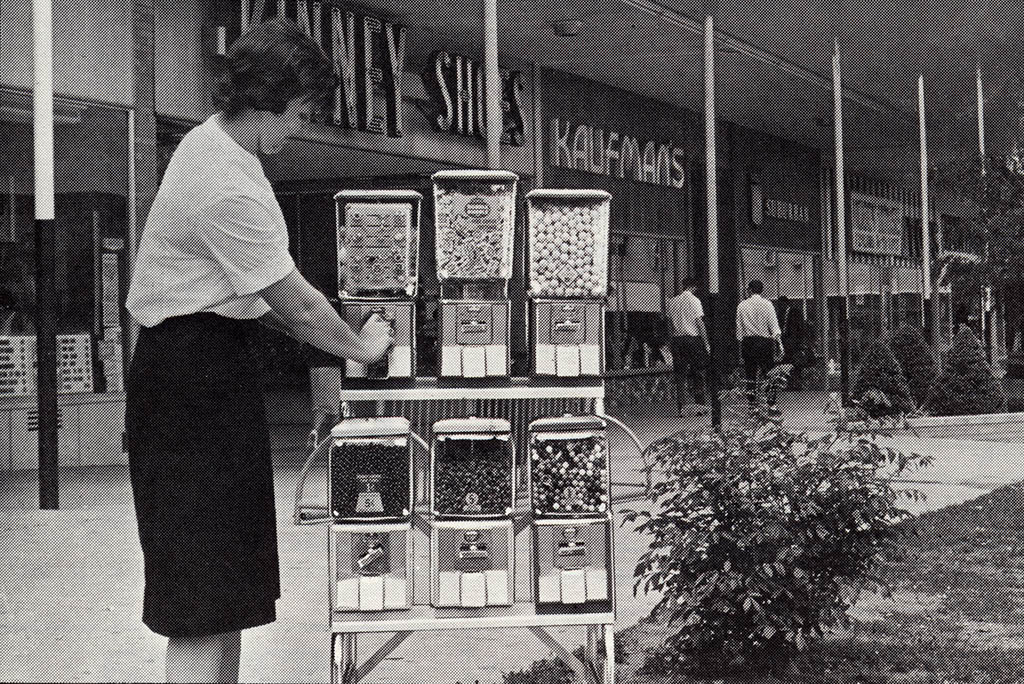 Candy vending machines at the shopping mall – Circa 1969

It’s not easy to make out, but that top-center machine has a Fleer Dubble Bubble insert card in it.  Here’s a different shot of the same machine. 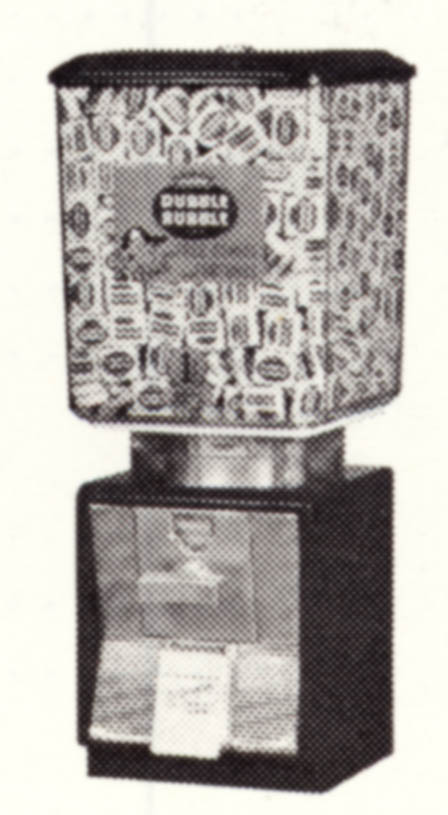 So the while the product they dispense and the machines themselves haven’t changed  dramatically over the years, the vend cards have always been the easiest way to mix things up and give product a new bit of marketing shine.  With that said, let’s get to them.

I’m going to start with my all-time favorite and one which I actually don’t have in my collection.  This is a big item on my current want list.  It’s the vend card for Hot Tamales.  [The scan of this comes to me courtesy of the Just Born company archives.]  Here it is:

Here’s the matching vend card for Mike and Ike: 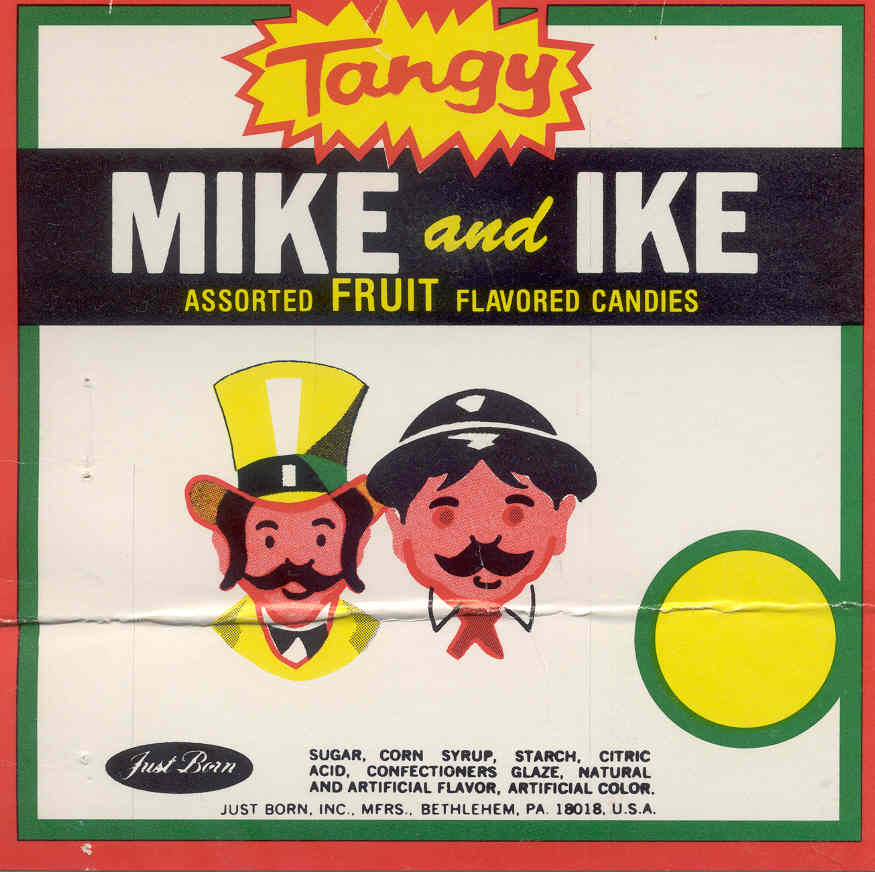 From the 1960’s and up through the 1990’s, one of the biggest suppliers of vending gumballs was the Leaf company.   While the flavors and styles of gumballs that Leaf sold year after year were not incredibly varied, they utilized their vending cards to rename and rebrand their offerings to keep them new and fresh. 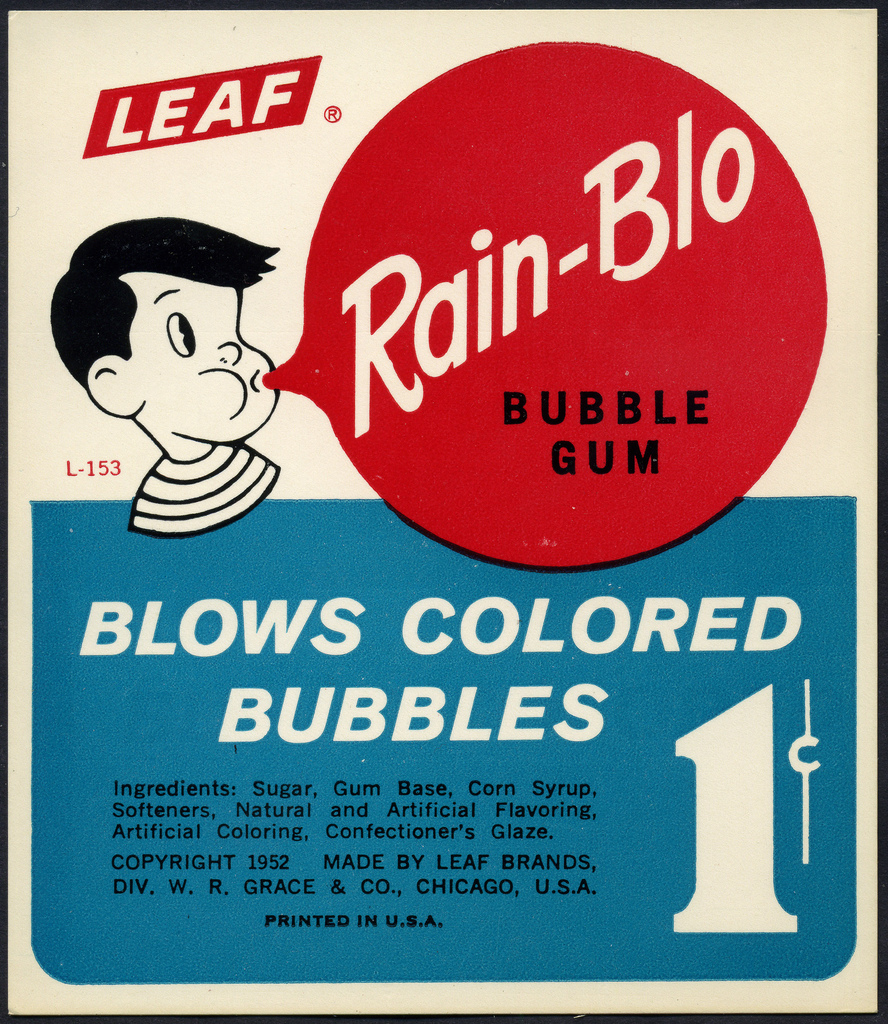 Here’s my favorite Leaf vend card – this one is part of CollectingCandy.com’s banner: 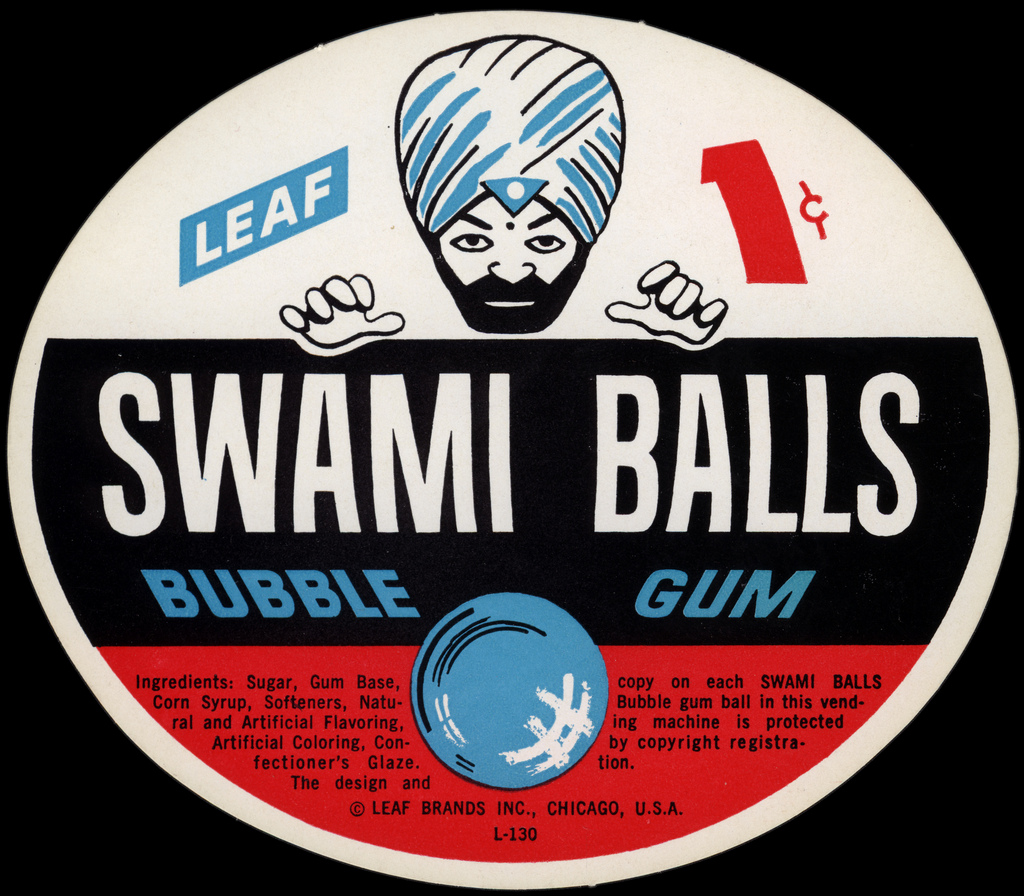 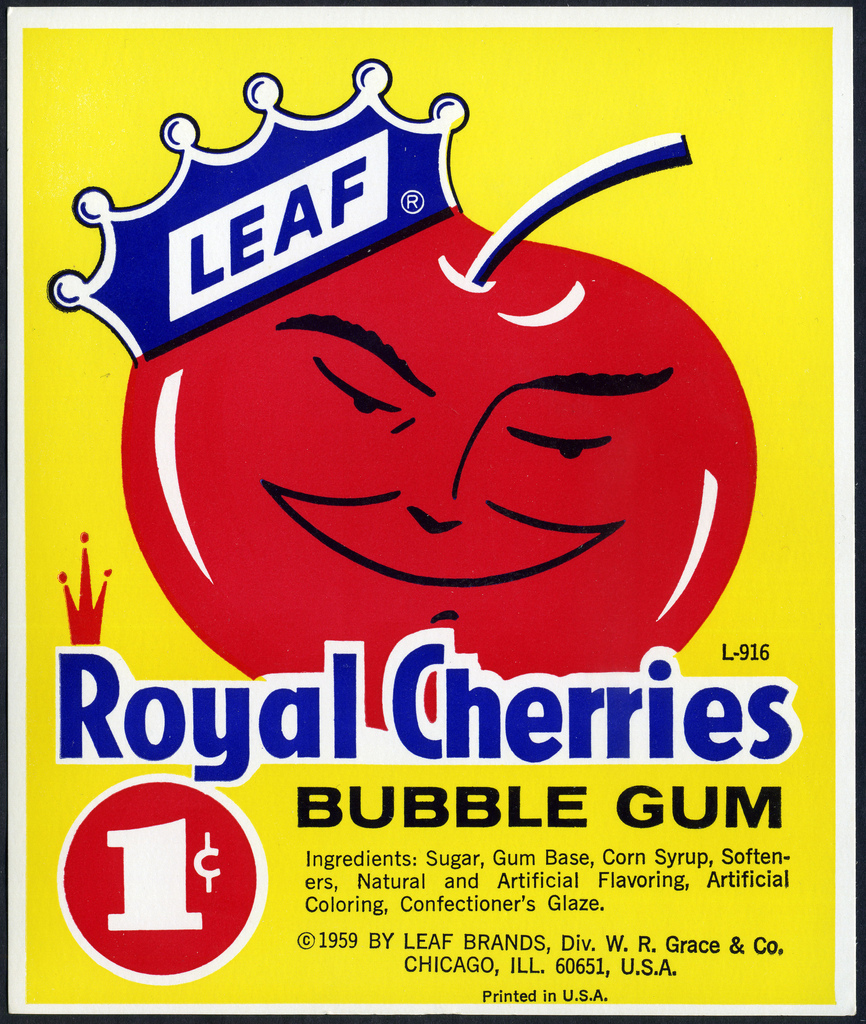 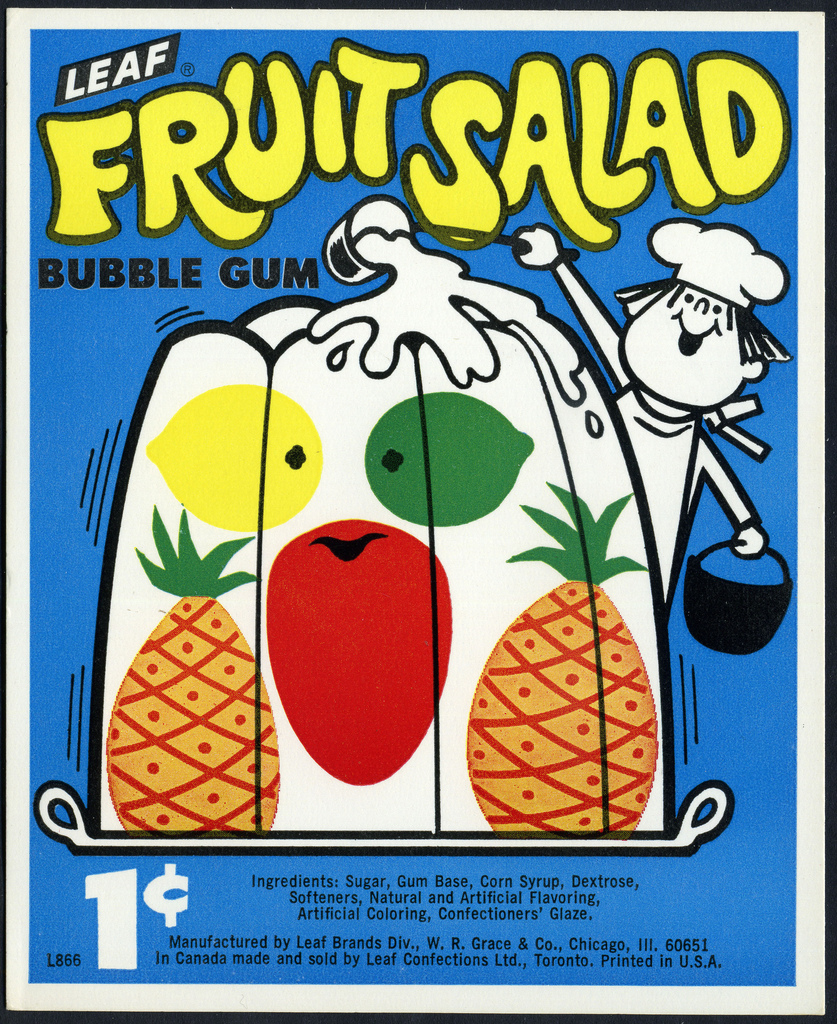 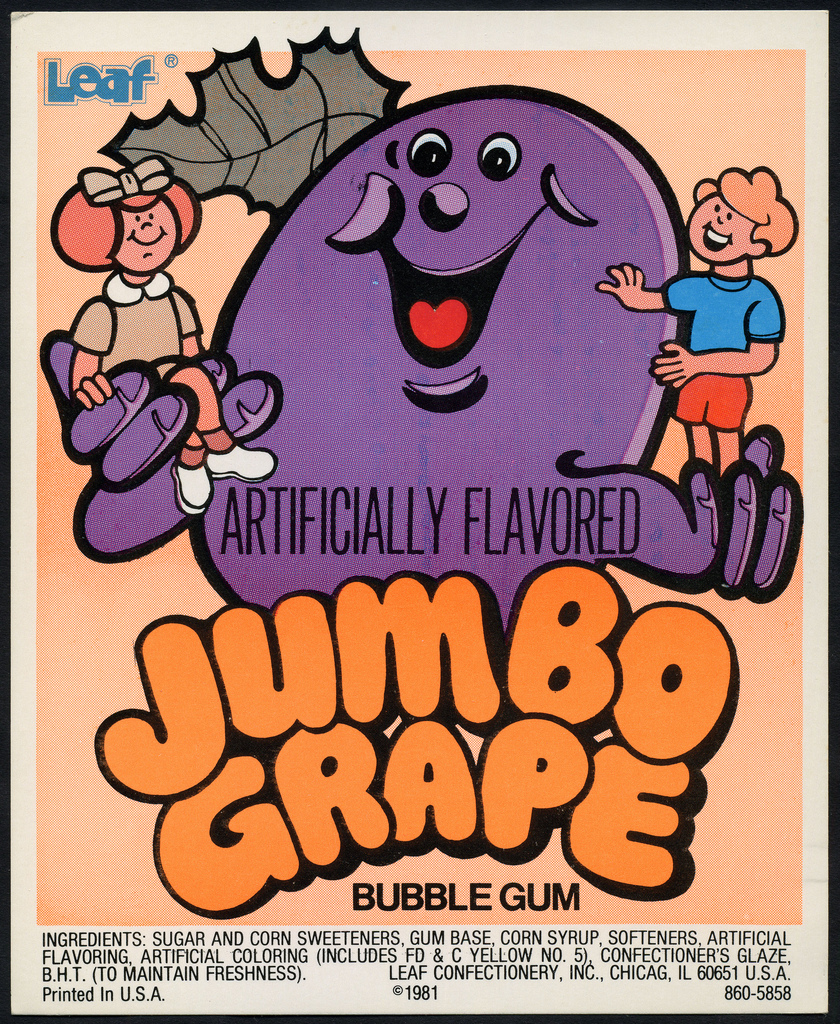 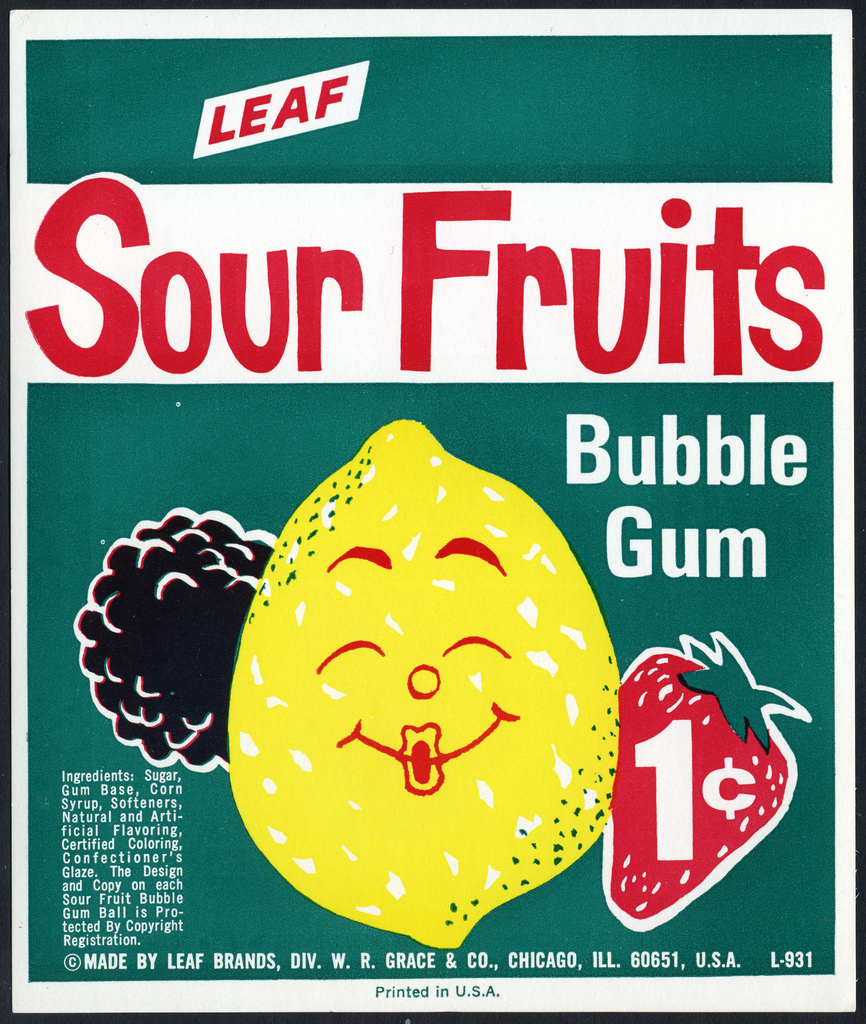 Companies could easily change or update how they wanted to market their offerings in the vending trade.  So, as a collector, you can often find several different versions of vend cards for a single product. 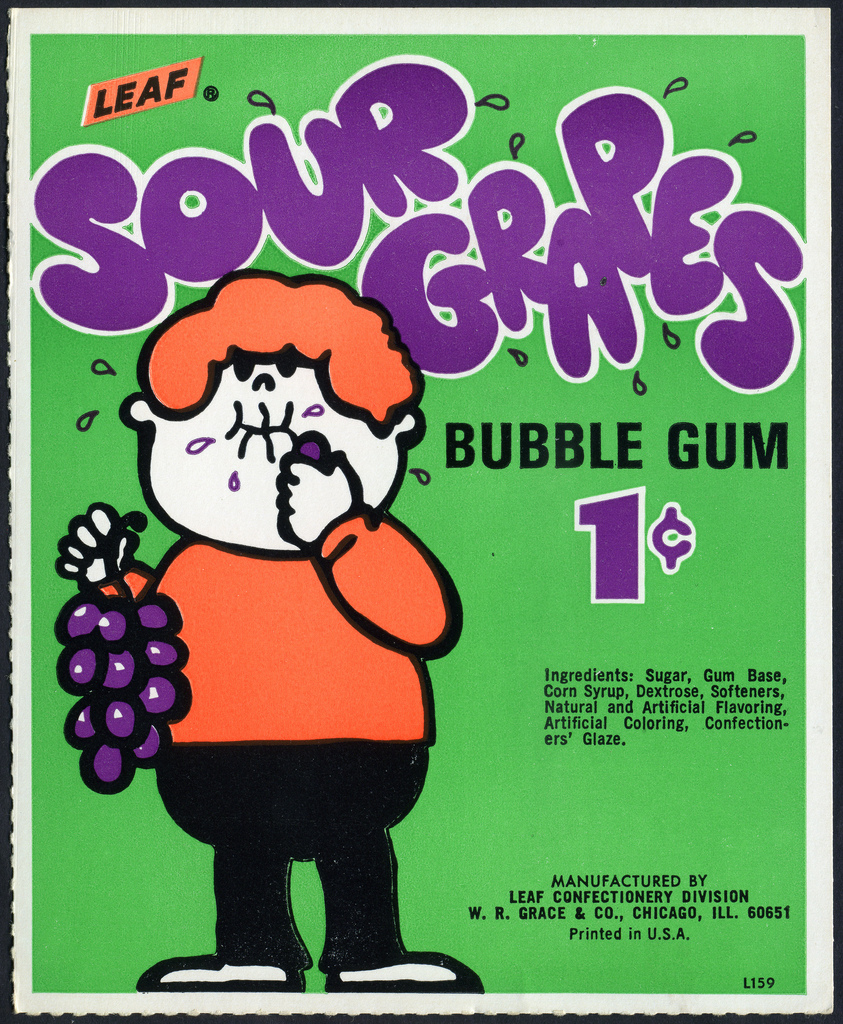 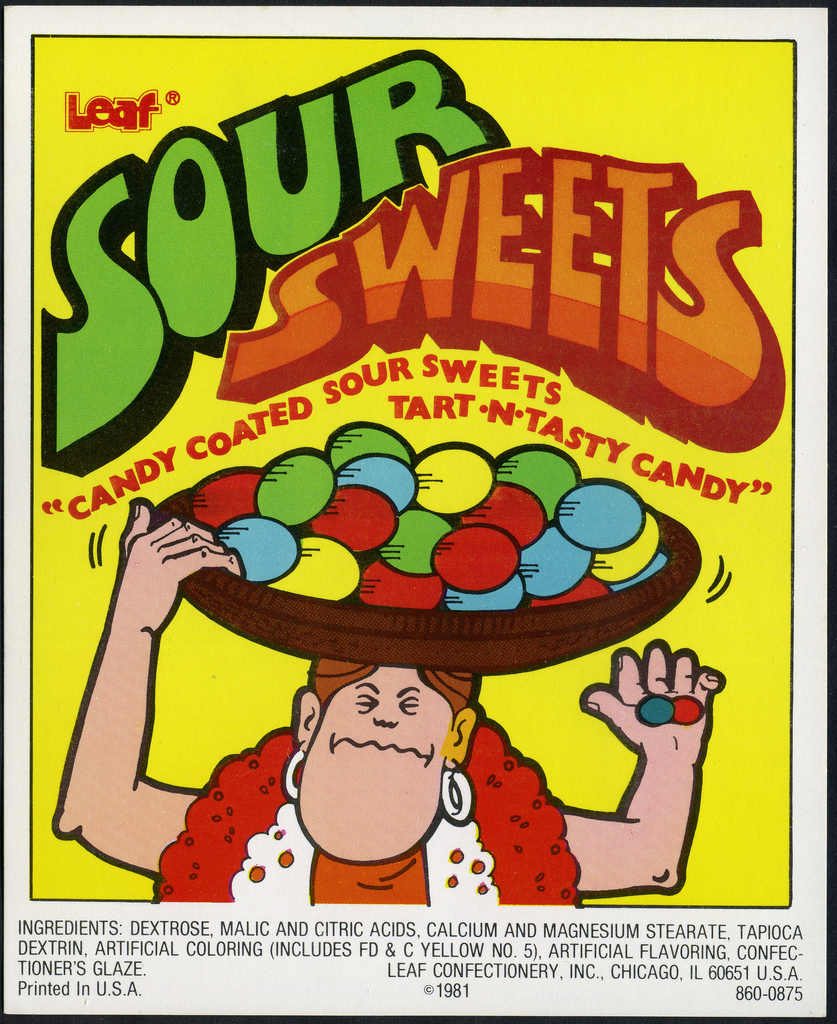 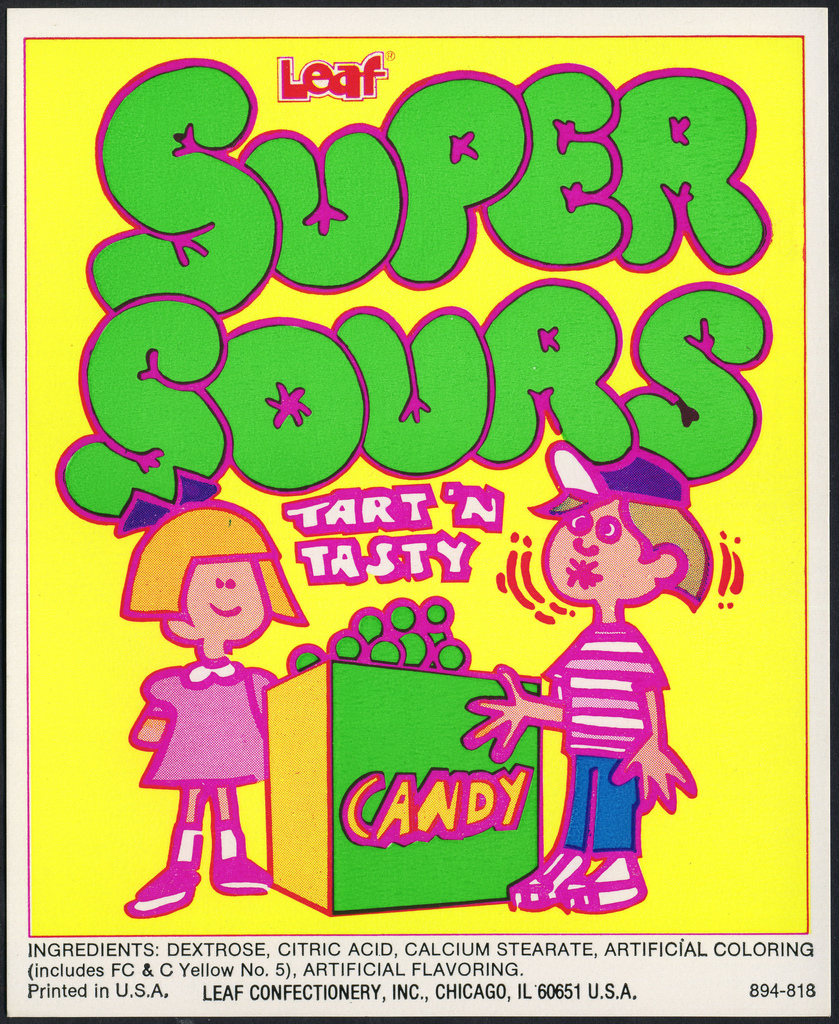 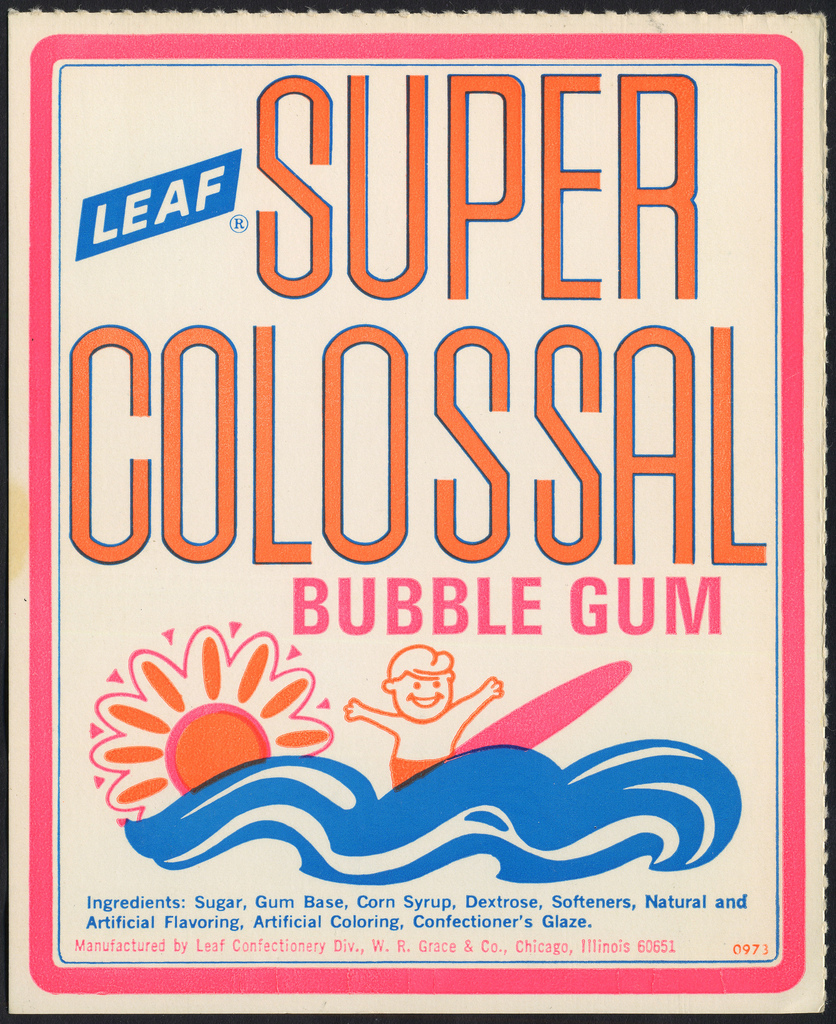 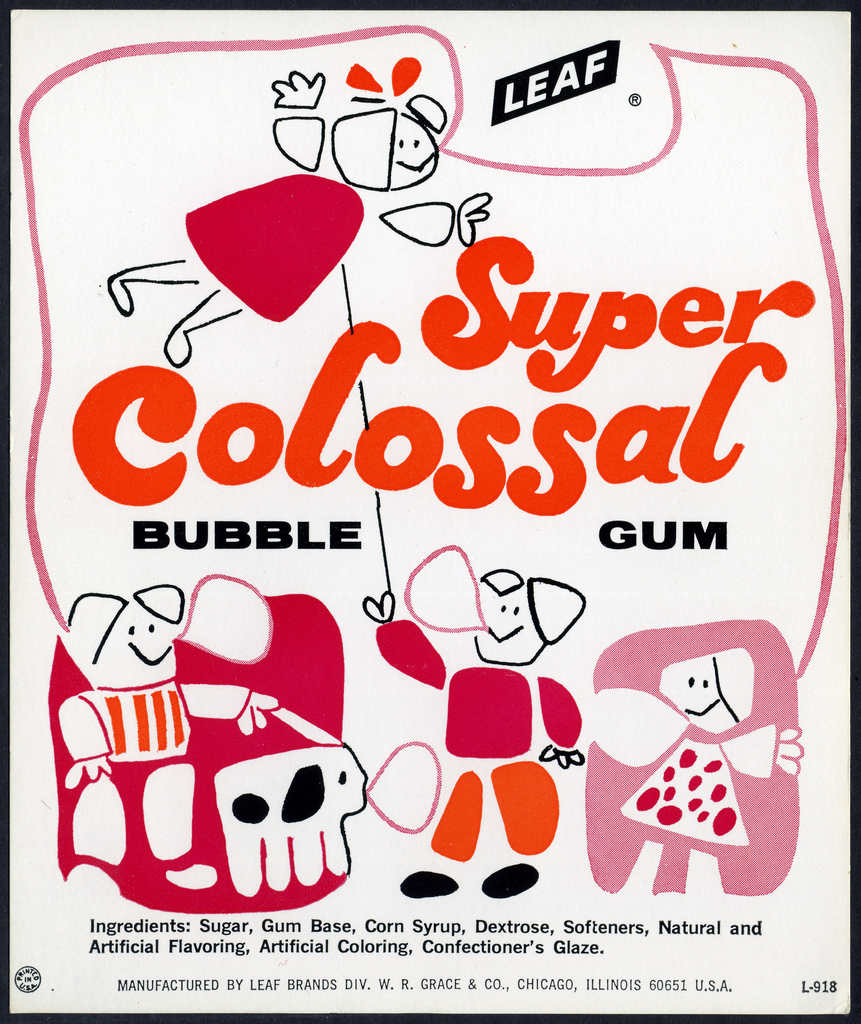 When something would strike the pop culture, like Star Wars and video games did in the late 70’s and early 80’s, manufacturers could quickly jump on the trend with a vend card.  Like this one: 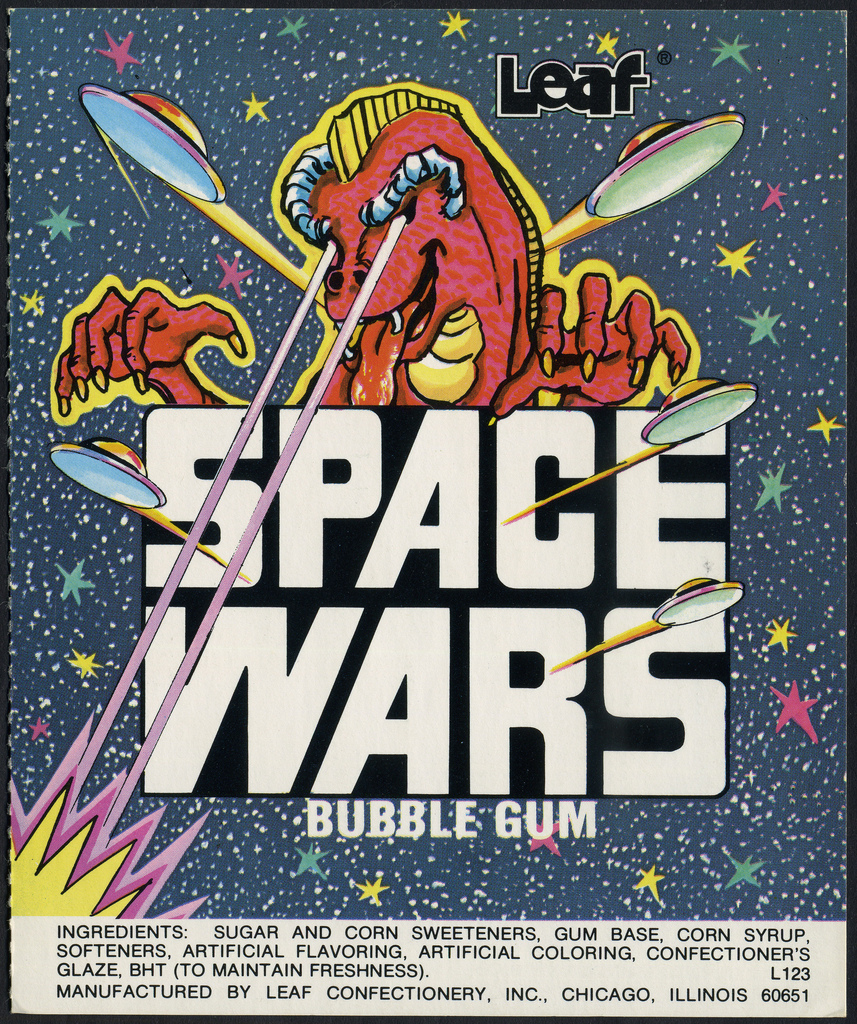 Other aspects of pop culture were quickly reflected in vend card concepts: 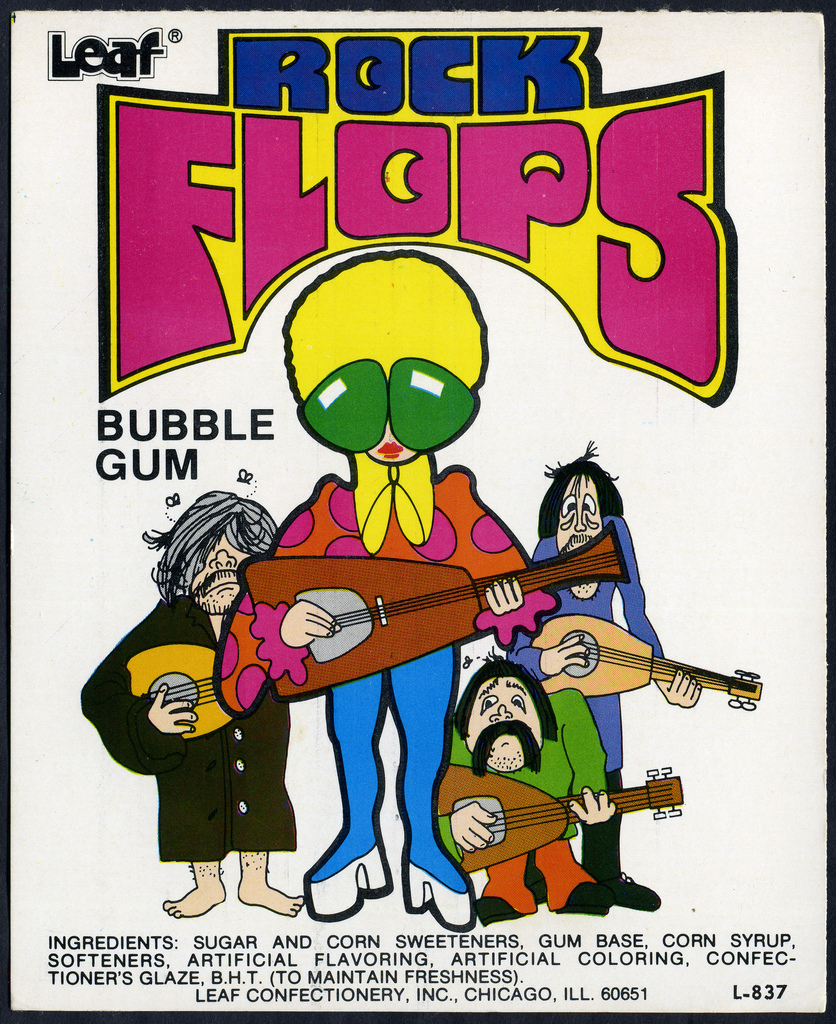 Here are a couple that, even when they were new, must have seemed a bit old-fashioned: 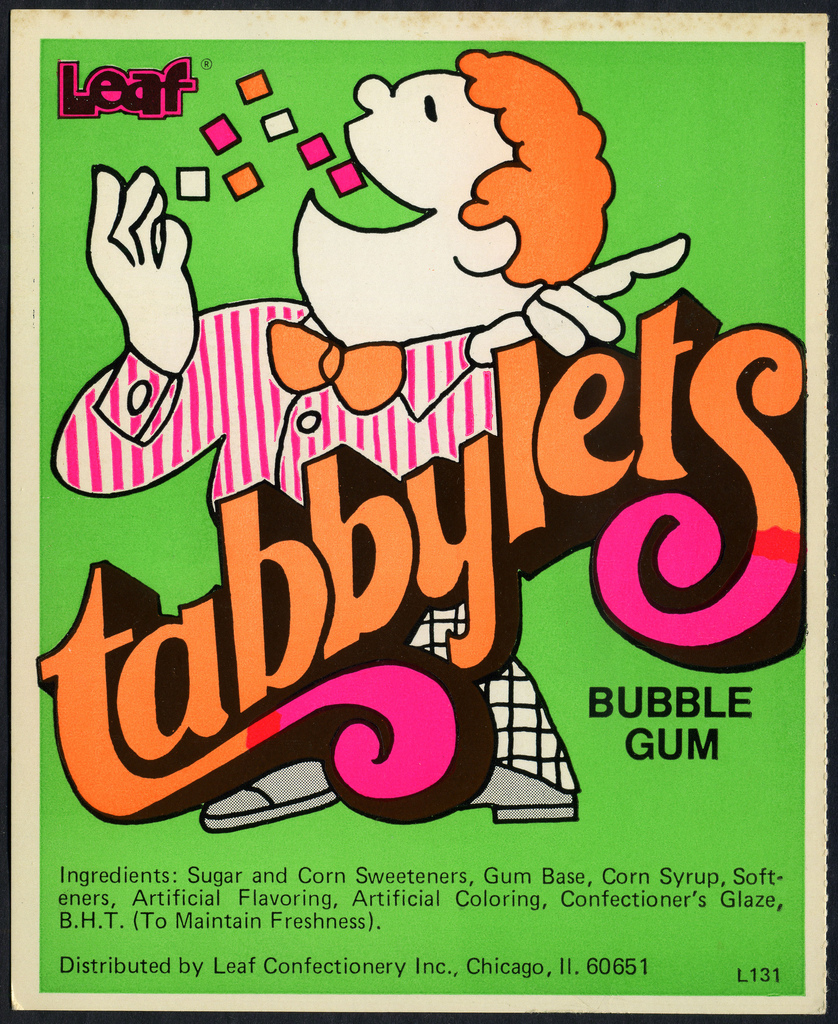 This next guy is packing heat.  You won’t find anything like this nowadays. 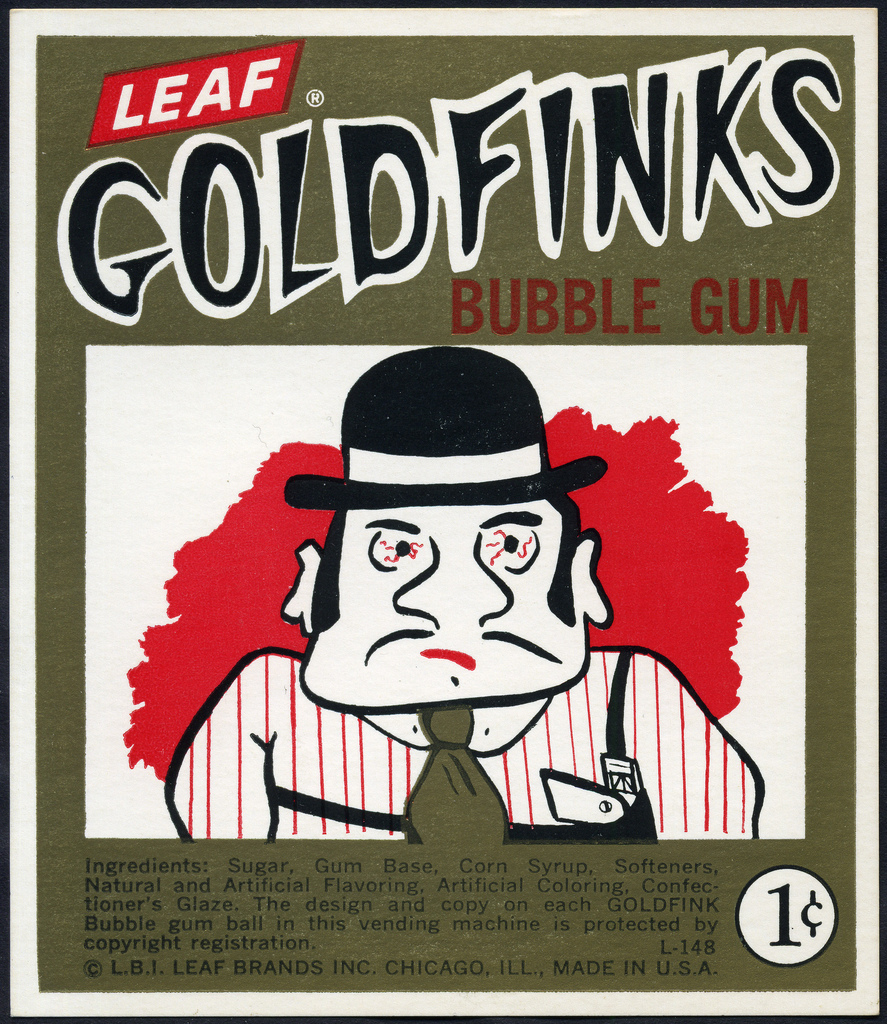 Here’s a great one that attempts to cover two divergent things that young boys dig; dinosaurs and astronauts: 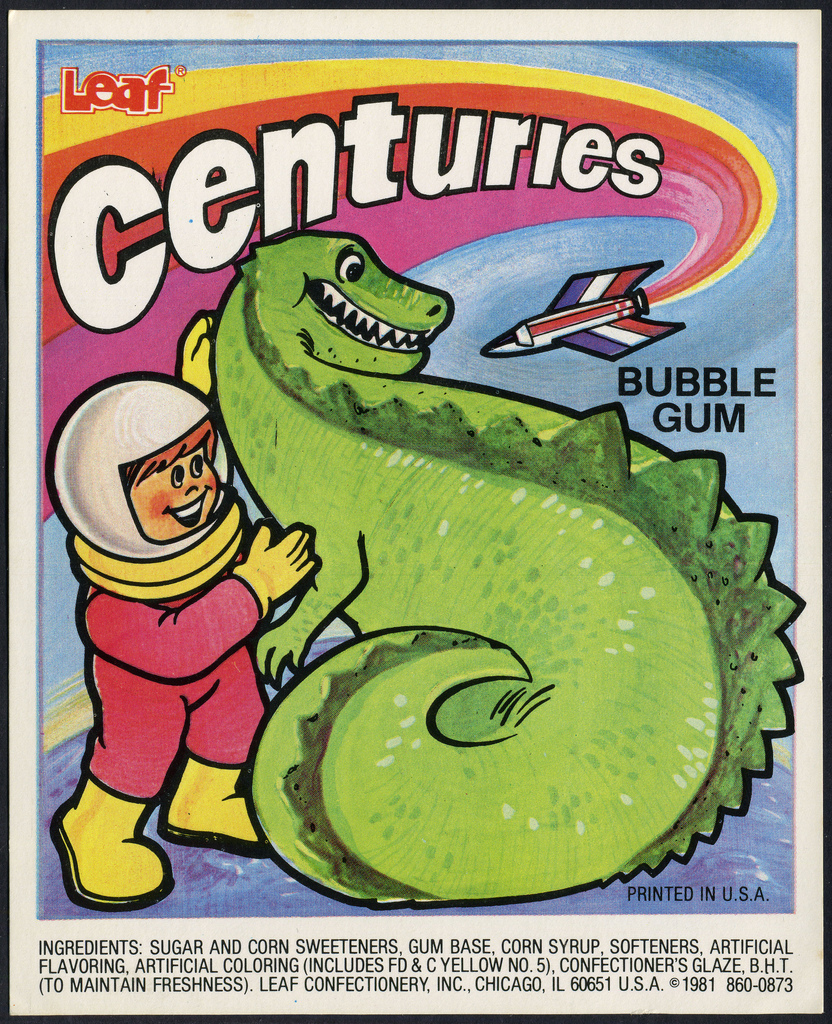 Of course, the vend trade wasn’t all about bubble gum.  Leaf offered other options: 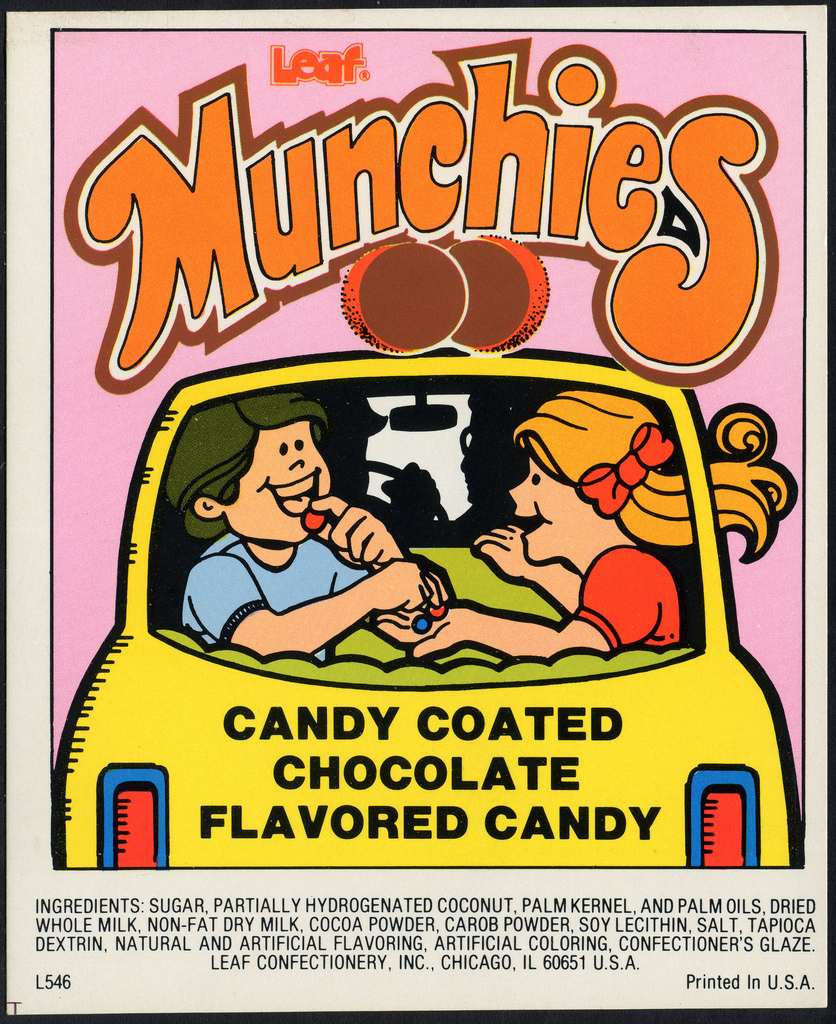 Leaf’s “Munchies” sounded a bit similar to another Leaf offering, Sixlets.  I wonder how they were different? 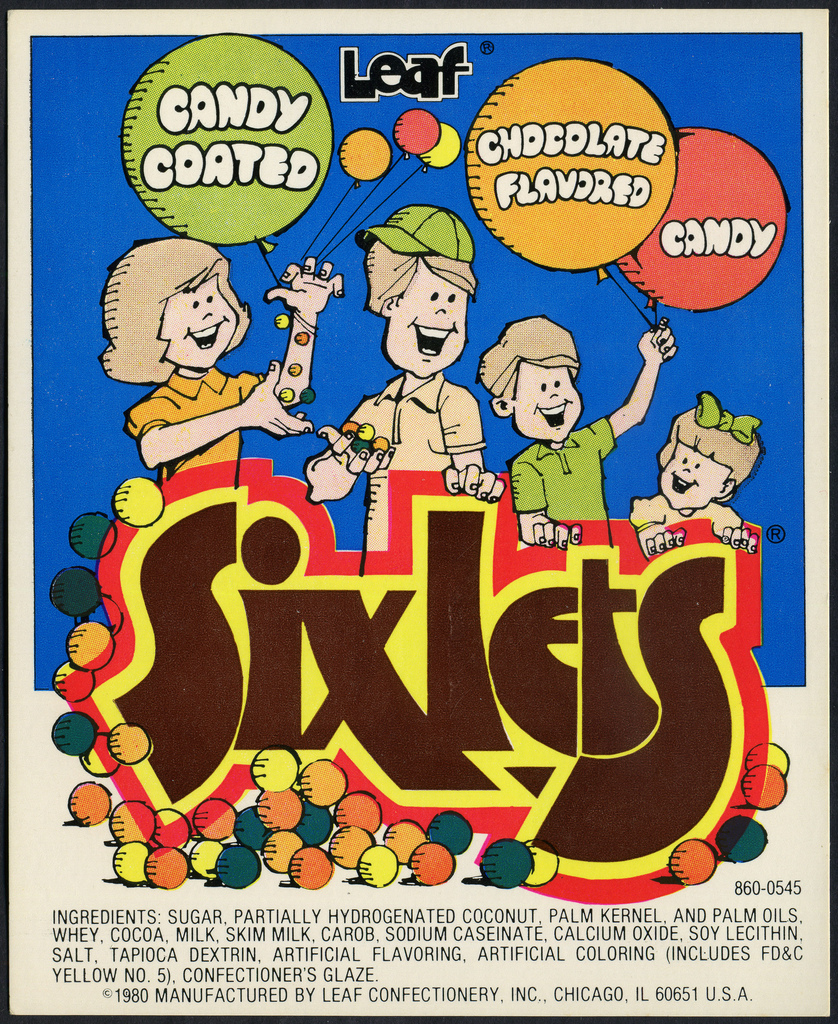 Here’s a candy classic that Leaf provided a chilled-out mascot for: 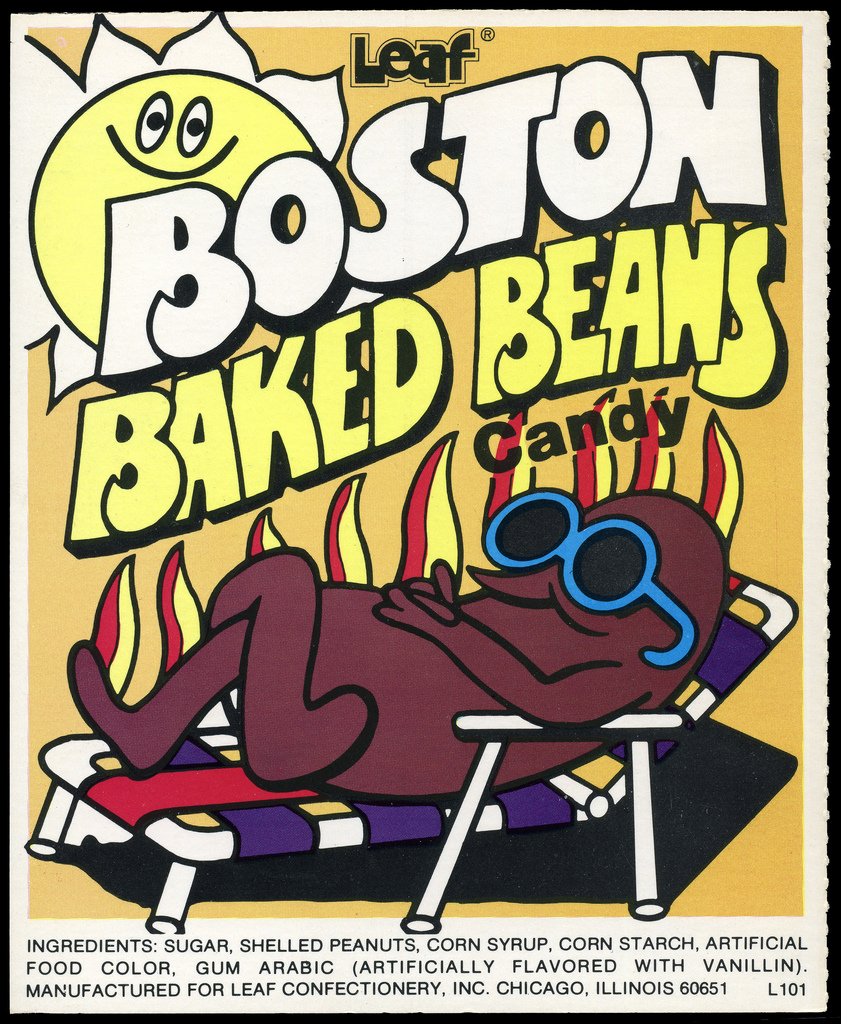 Moving on from Leaf, here’s another candy-isle treat that you could occasionally find in vending: 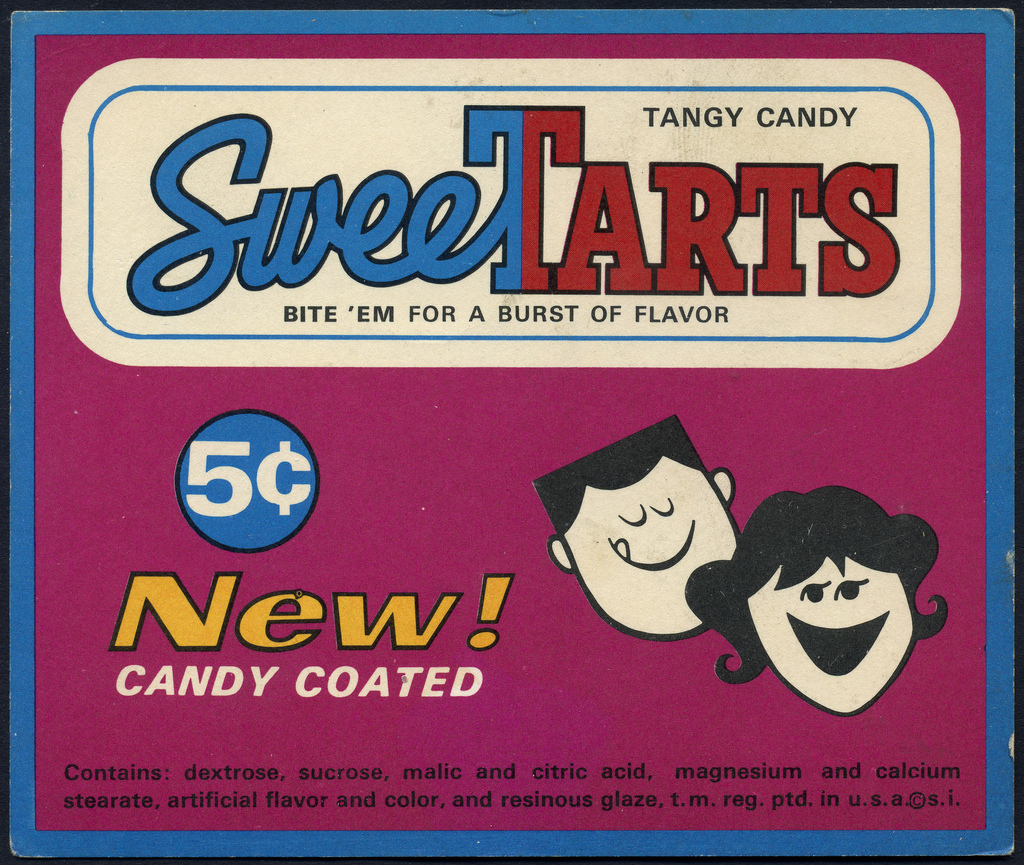 I just noticed that the Sweettarts vend lists them as “candy coated”.  I suppose that made them easier to manage through the machine, but is a candy-coated Sweettart just a Spree?   I’m not sure.

There are so many of different vending cards that have been produced over the decades, it really does blow your mind when you start hunting for them.

Of course, vending machines offer more than just candy and gum – they also offer other kinds of enticements.

As I said at the top of today’s post, you could have a legitimate hobby just collecting and documenting vending card inserts.  Especially if you decided to include the non-candy and gum offerings.  I only have one such piece in my personal collection, so I wanted to include it here.

As with so many vend cards, this one is a great reflection of the culture of the time: 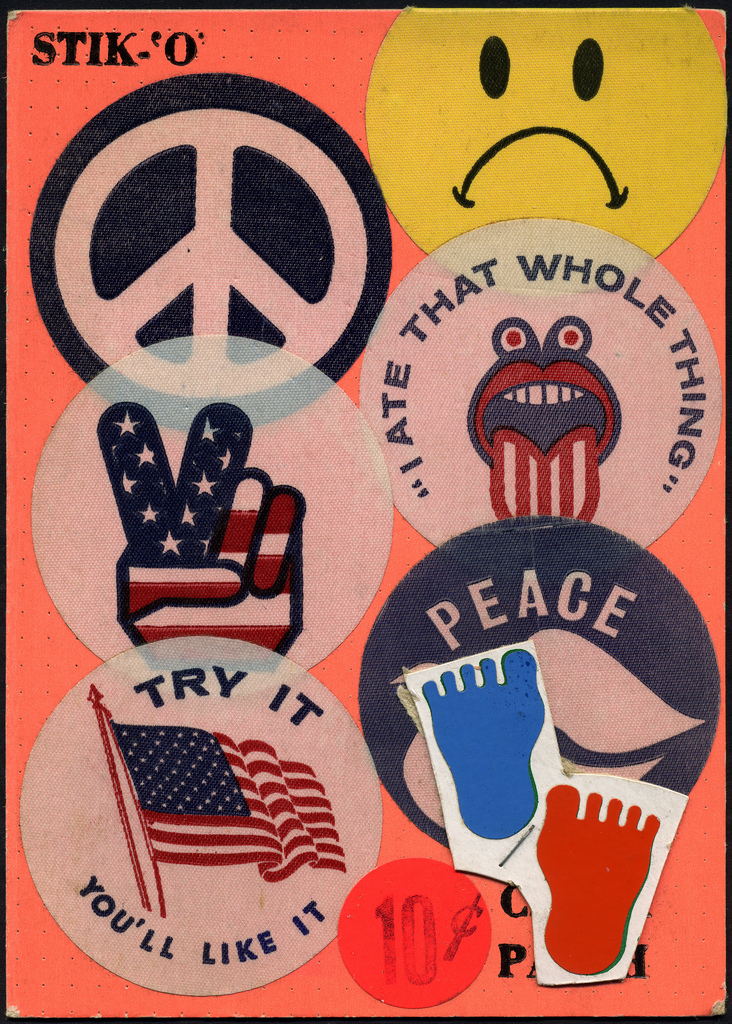 Though I started today’s post by stating that I don’t focus on these too much, the act of sitting down to write about the topic today makes me feel like I want to devote a little more time to them.

But we’ll see – there’s only so many hours for candy in the day.   And my time for today has ended.   With that, I’m going to wrap up my coverage of vending machine insert cards, and wish you all a happy Labor Day!

A New York City based writer, editor and sometimes actor. After spending much of the 1990′s in the comic book business helping tell the stories of Marvel Comics’ X-Men as series editor, he has since split his time between developing his own entertainment properties while still consulting and working on others. Having been described as “the Indiana Jones of lost and forgotten candy”, Jason is one of the country’s premier candy collectors and historians with his discoveries appearing in countless blogs, magazines, newspaper articles, and books. Always happy to share his knowledge and unique perspectives on this colorful part of our popular culture, Jason has consulted with New York’s Museum of Food and Drink and has also been a featured guest on Food Network’s Heavyweights, France’s M6 Capital, and New York’s TheActionRoom.com. My Google Profile+
View all posts by Jason Liebig →
This entry was posted in 1960's, 1970's, 1980's, 1990's, Bubble Gum, Gum, Novelty and tagged 1960's candy, 1960's gum, 1960's vending machine, 1970's vending machine, 1970's vending machines, candy collecting, candy collection, candy collector, candy wrapper collection, candy wrapper collector, collectible, collecting candy, confectionery, confections, gumball machine, packaging, sweets, vending machines, vintage candy wrapper, wrapper. Bookmark the permalink.

4 Responses to The Colorful and Wacky World of Candy Machine Insert Cards!