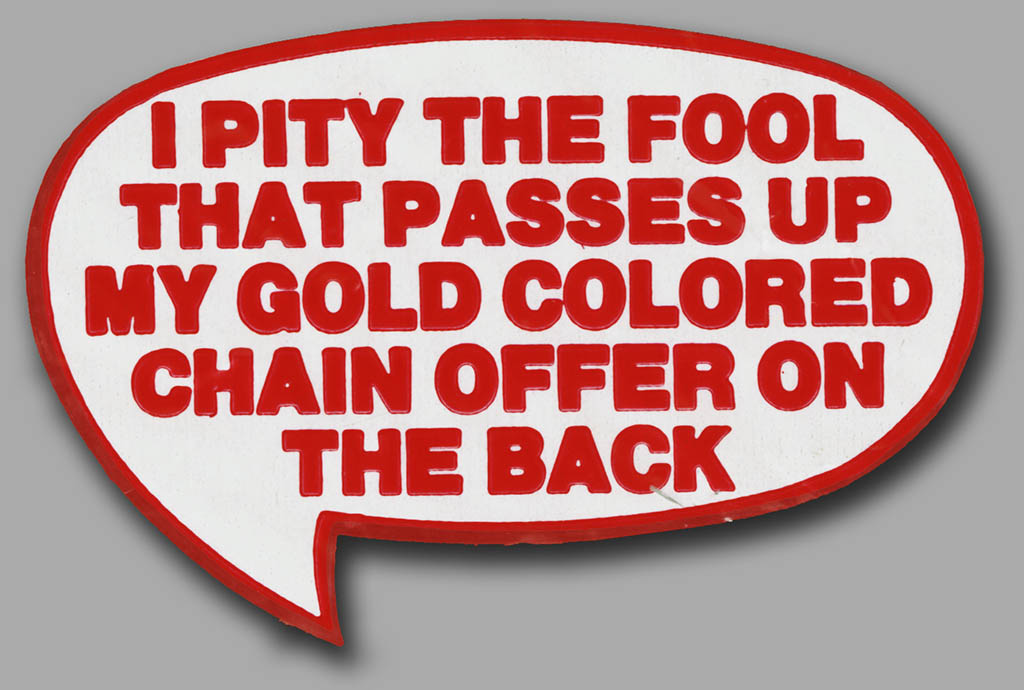 Ah, Mr. T and his Gold Chain bubble gum.  I don’t have much to say about this that hasn’t already been said.  But having recently acquired a pack, I thought it warranted a dedicated post.

Produced in 1985 by novelty confectioners Amurol, Mr. T Gold Chain gum was a large flat piece of gum with chains carved or die-cut out of it, and I use the term “chains” loosely.   They were more like long flat noodles of gum than chains, but they did the job that was required of them.

The pack I acquired still had the 27-year-old gum inside but that had melted a bit and sludged down into the bottom of the cello pack.  There might have been some critters in the pack at one time too, as there were a couple of what looked like small bore holes in the cello.

This is what it looked like when it came to me: 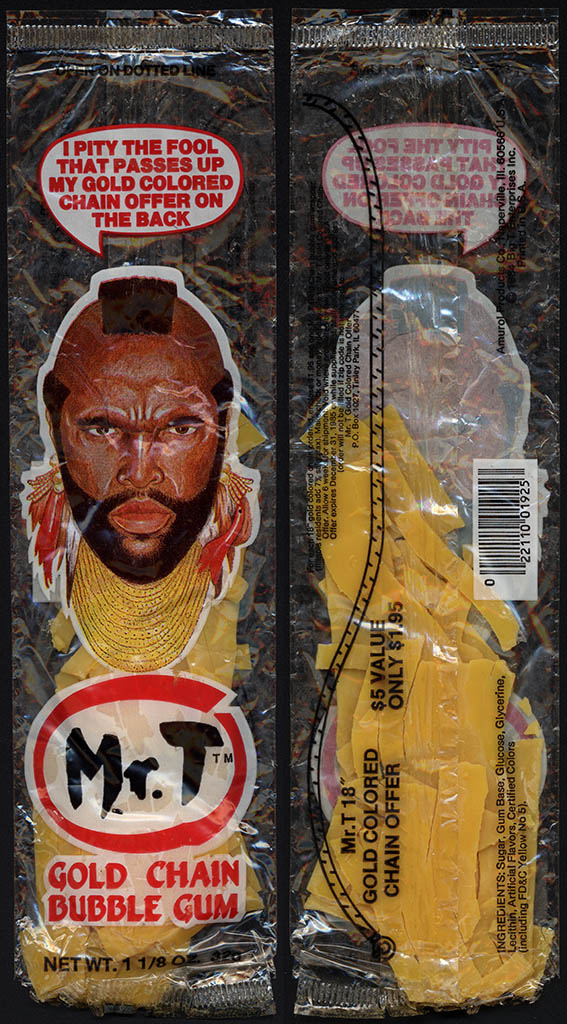 In rare cases I do keep packages intact with the product still inside, but not when I fear that doing so will endanger the package down the road.  Unfortunately, in this case I could see that leaving the gum inside would lead to further damage, so I set about to divest it of its contents.

The bottom of the cello was pretty shredded, so I carefully cut the crimped section off.  That allowed me to get at most of the gum and remove it, but small pieces and some nasty residue remained.  I decided the best way to preserve this was to run it under hot water in an attempt to loosen the heat seal on the back of the package.  After a bit of time under the faucet, the heat seal slowly started to come loose.  As I got to the top, I realized I’d also have to snip the top seal off as well.  Trying to pry it apart would have only caused shredding on the top of the pack.

Once that was done, I was able to fully clean the inside of the pack and after drying it this is what I had (scanned against a green hardcover book): 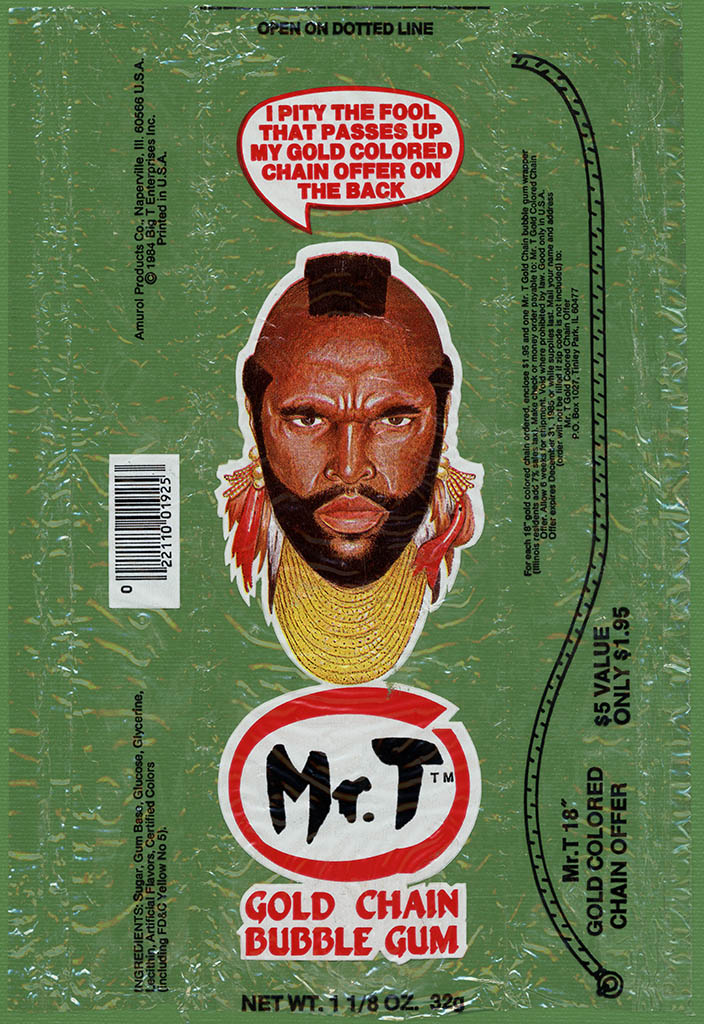 I think that one turned out pretty nice.

Mr. T was definitely on a roll in the mid-80’s and his image was everywhere.  Even so, I think Gold Chain gum is the only piece of candy or gum he ended up on back then.   Here’s something else from the era, loaded up with Mr. T awesome-ness: 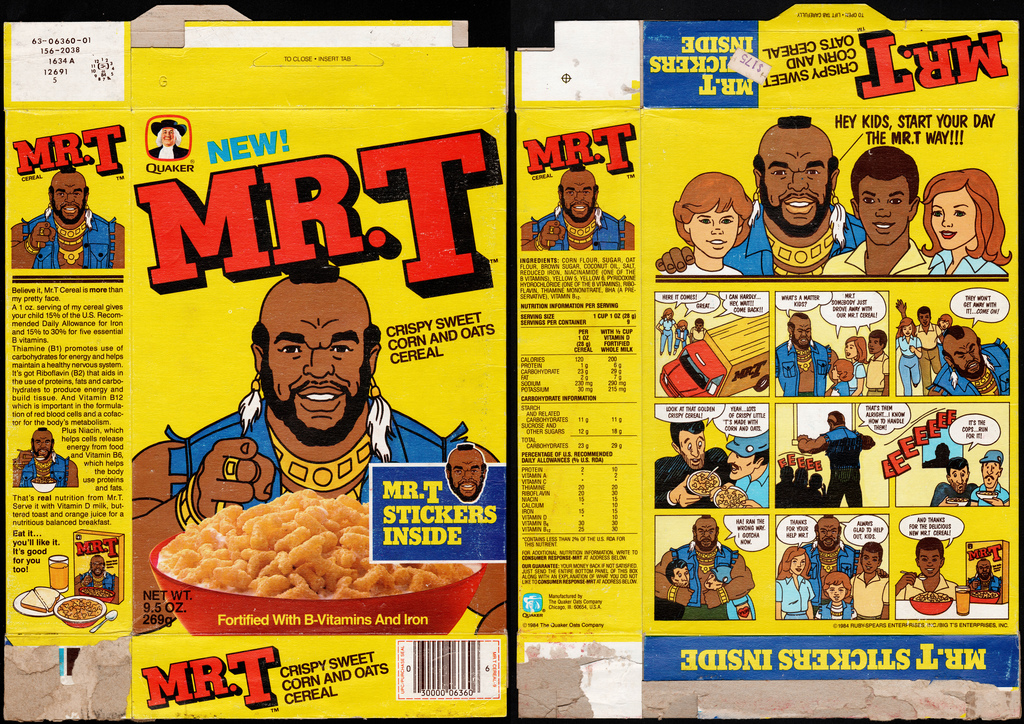 I could go on and on about Mr. T, but I’ll leave it to you to have some fun with this one.

A New York City based writer, editor and sometimes actor. After spending much of the 1990′s in the comic book business helping tell the stories of Marvel Comics’ X-Men as series editor, he has since split his time between developing his own entertainment properties while still consulting and working on others. Having been described as “the Indiana Jones of lost and forgotten candy”, Jason is one of the country’s premier candy collectors and historians with his discoveries appearing in countless blogs, magazines, newspaper articles, and books. Always happy to share his knowledge and unique perspectives on this colorful part of our popular culture, Jason has consulted with New York’s Museum of Food and Drink and has also been a featured guest on Food Network’s Heavyweights, France’s M6 Capital, and New York’s TheActionRoom.com. My Google Profile+
View all posts by Jason Liebig →
This entry was posted in 1980's, Bubble Gum, Novelty and tagged 1980's candy, 1980's gum, A-Team, Amurol, bubble gum, Mr. T, novelty, Wrigley. Bookmark the permalink.