A Fun One For Friday – Donruss’ Flat Foot Bubblegum!

Today’s post is about one of candy’s one-hit wonders – a product that likely didn’t last more than a year before it disappeared into confectionery history – Donruss’ Flat Foot bubble gum.

Released sometime in the early 1970’s, Flat Foot was likely a novelty type of bubble gum pressed into the shape of an illustrated foot.  The packaging, while simple, has a great graphic look to it: 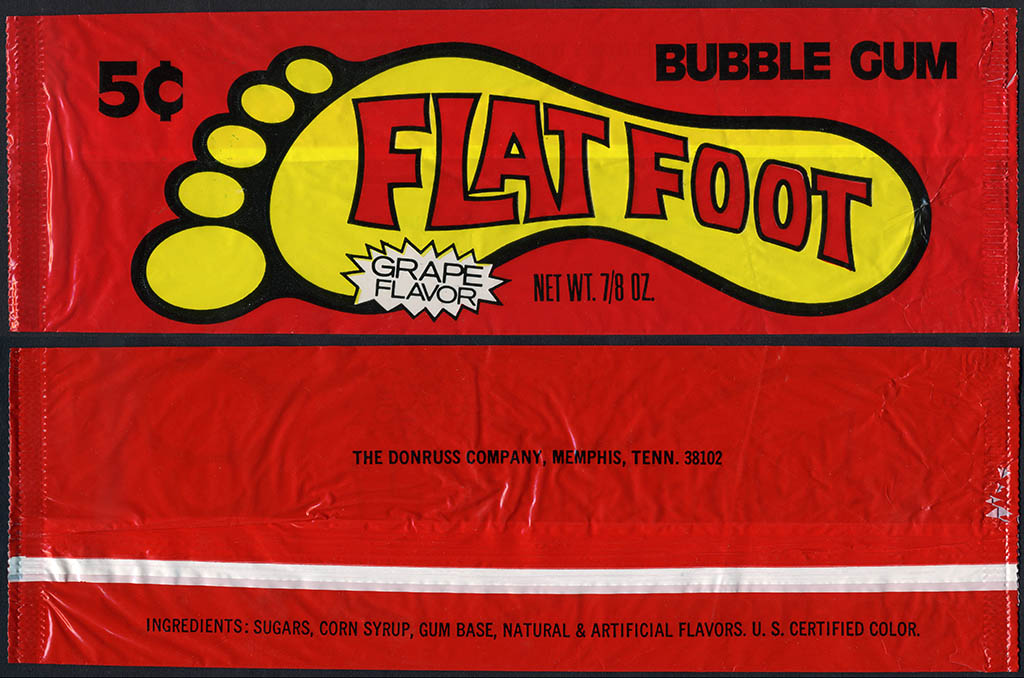 The package highlights that this was for a grape flavor Flat Foot.  I’m not sure if there were other flavors, but I’d guess that there were.  This is the only variety of Flat Foot bubble gum package I’ve ever encountered though, so I can’t be 100% certain.

Considering the era when this product was put on sale, it seems pretty clear that the folks at Donruss were trying to play on the popularity of the Hang Ten clothing line, which was quite popular at the time.   Considered “The Original Surf Brand”, Hang Ten were the first company to sell board shorts, which they first did in 1960.

The Hang Ten brand was quite successful in the 1960’s and 1970’s, and has managed to live on, even today.  The Hang Ten logo itself became well-known and associated with the beach culture.    To many kids of the early 70’s, a product sporting the Hang Ten branded footprints had an extra bit of cool about it.  Here’s a look at a tag from inside an early 1970’s vintage Hang Ten t-shirt: 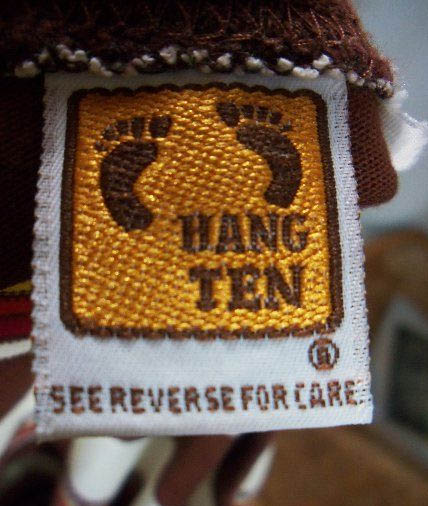 Here’s a current version of the logo:

This should highlight that Donruss Flat Foot bubble gum was a clear attempt to associate the brand with imagery that was already a popular part of the youth culture of the time.   It would seem to be Marketing 101.

The effort has left us with an example of candy packaging that is not only an appealing piece of confectionery ephemera, but a reflection of a colorful part of the era’s culture, which is pretty neat.

And that’s all for today’s brief post – I hope you dug it.

A New York City based writer, editor and sometimes actor. After spending much of the 1990′s in the comic book business helping tell the stories of Marvel Comics’ X-Men as series editor, he has since split his time between developing his own entertainment properties while still consulting and working on others. Having been described as “the Indiana Jones of lost and forgotten candy”, Jason is one of the country’s premier candy collectors and historians with his discoveries appearing in countless blogs, magazines, newspaper articles, and books. Always happy to share his knowledge and unique perspectives on this colorful part of our popular culture, Jason has consulted with New York’s Museum of Food and Drink and has also been a featured guest on Food Network’s Heavyweights, France’s M6 Capital, and New York’s TheActionRoom.com. My Google Profile+
View all posts by Jason Liebig →
This entry was posted in 1970's, Bubble Gum, Gum, Novelty and tagged 1970's candy, 1970's gum, 70's bubble gum, 70's candy, 70's gum, bubblegum, candy collecting, candy collection, candy collector, candy wrapper collection, candy wrapper collector, collectible, collecting candy, confectionery, confections, Hang Ten clothing, packaging, surf wear, sweets, vintage candy wrapper, wrapper. Bookmark the permalink.

1 Response to A Fun One For Friday – Donruss’ Flat Foot Bubblegum!