Just over two months ago, I wrote about the history of Rolo.  At the time, the earliest wrapper I had to show you was from 1952, but today I get to reveal what the very first Rolo wrapper from 1937 looked like.

Shortly after I wrote that article, I received an e-mail from the United Kingdom.  The e-mail was from the son of a gentleman who had collected chocolate wrappers during a few years in his youth.   That man was now 87-years-old, and he held onto those wrappers through the decades.

Over the following few weeks, I exchanged e-mails with the man’s son and daughter.  I quite enjoyed getting to meet and know this family in this small way.  I was curious to hear about how and when he saved his collection, and he was gracious enough to pen this reply:

“As a schoolboy from 1935 to 1940, I spent pocket money on chocolate bars, usually priced 2d.  Shops would have a number of different brands and I collected as many different makes as possible. Whenever towns apart from my home town were visited, I would look for new bars , so some are from various parts of the country.

Collecting finished with the war when RATION chocolate bars became the only ones available.

Every bar was eaten by me!

After the war I took no further interest in wrappers and the collection has remained untouched since 1940 with no additions.”   –  Leo Harwood.

I worked out a deal with Mr. Harwood to acquire a few of the pieces from his collection, and to say that I was thrilled to do so is an understatement.

Knowing that these wrappers were coming directly from the man who, some seventy-years earlier, purchased and saved them himself, was pretty incredible.   Writing about it today, I’m still quite moved by the idea.

I wasn’t aware when I first saw that Rolo wrapper that it was THE first.  However, when I noticed the “provisional” trademark indication, that was a big hint.  A deep search into the U.S. Trademark Office Archives turned up the following proof; an image which verified that this was, in fact, the very first style to grace Rolo packages:

There was one other Rolo wrapper that came to me from this collection.  Likely from just a few years later: 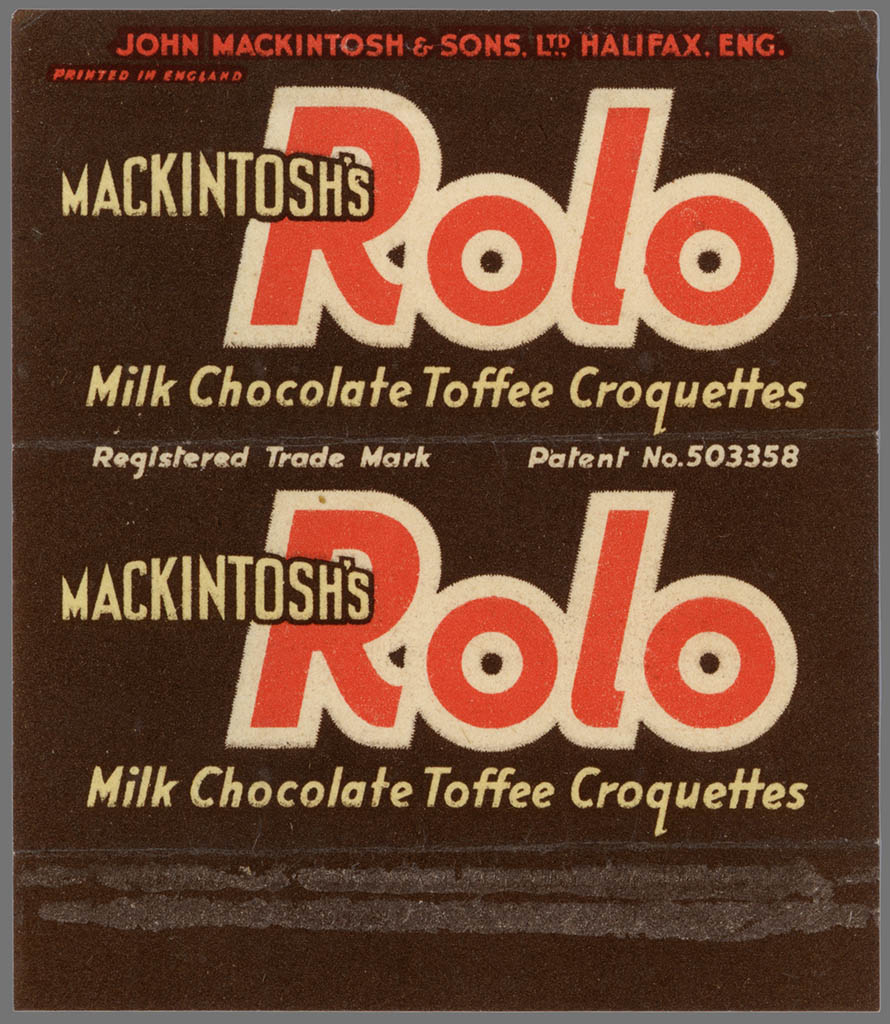 You’ll notice that wrapper no longer has a provisional patent indication.   It’s also a bit smaller, with no price marking included.

And that’s everything I have to share today on the very first Rolo.

In the coming months, I hope to be able to share more from the wonderful collection that these Rolo wrappers came from, so stay tuned.

A New York City based writer, editor and sometimes actor. After spending much of the 1990′s in the comic book business helping tell the stories of Marvel Comics’ X-Men as series editor, he has since split his time between developing his own entertainment properties while still consulting and working on others. Having been described as “the Indiana Jones of lost and forgotten candy”, Jason is one of the country’s premier candy collectors and historians with his discoveries appearing in countless blogs, magazines, newspaper articles, and books. Always happy to share his knowledge and unique perspectives on this colorful part of our popular culture, Jason has consulted with New York’s Museum of Food and Drink and has also been a featured guest on Food Network’s Heavyweights, France’s M6 Capital, and New York’s TheActionRoom.com. My Google Profile+
View all posts by Jason Liebig →
This entry was posted in British, Chocolate and tagged British, candy collecting, candy collection, candy collector, candy wrapper collection, candy wrapper collector, chocolate wrapper, collectible, collecting candy, confectionery, confections, Mackintosh, Nestle, packaging, pre-war chocolate wrapper, Rolo, Rowntree, sweets, UK, United Kingom, vintage candy wrapper, wrapper. Bookmark the permalink.