I suppose that candy corn is a topic typically left for the Halloween season and partly because of that I thought it would be unexpected and fun to look at some vintage candy corn packaging right now in July.

I’m going to start today’s candy-corn-coverage with a simple and small box from Brach’s.  I hadn’t thought about this candy corn box in decades, and if you’d asked me about it, I wouldn’t have remembered it.  But when I recently came upon this example it brought back a flood of memories.

I suspect I got one of these in every holiday haul during my 1970’s costumed Halloween outings.  At 1/2 an ounce, it was the perfect size for candy corn – more than this and I would start to feel my teeth melt.

It’s these little treasures of memories that make uncovering pieces like this so much fun.  I should note that this is another CollectingCandy.com world exclusive premiere – you won’t find an image of one of these boxes anywhere else on the ‘net: 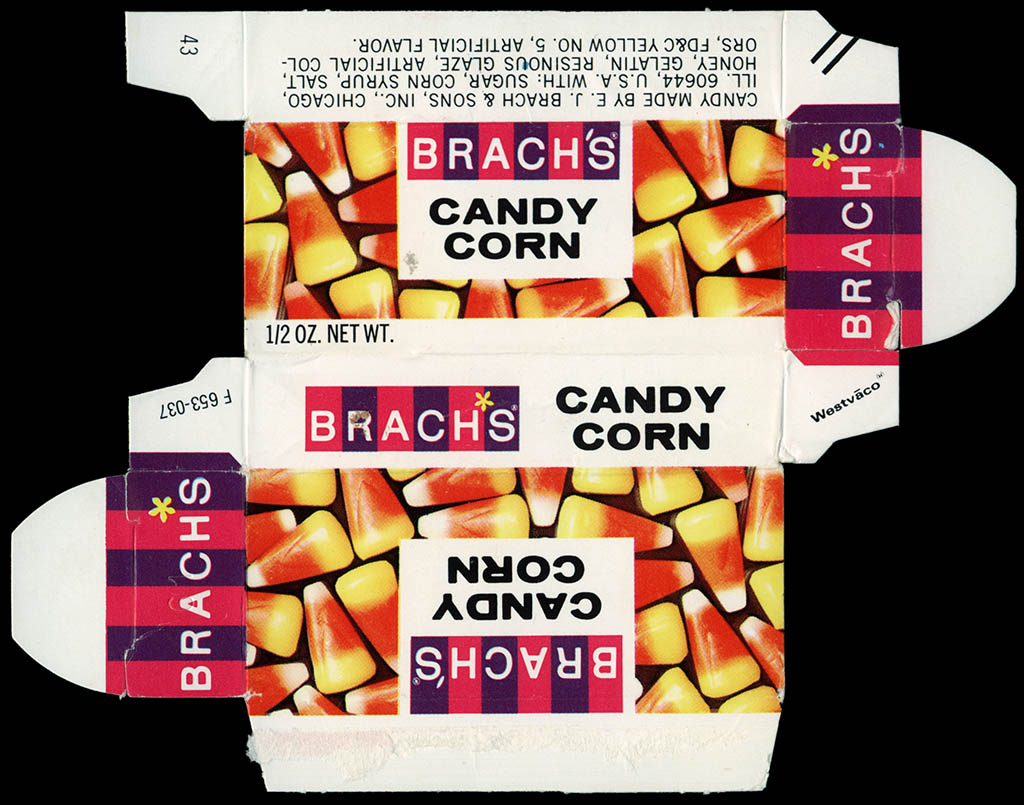 To me, that Brach’s box is a true holiday confectionery classic.

Next up is a package I find unusual in the category of candy corn – this one appears created for the standard candy shelf.  Yes, right along with the Hot Tamales, the Dots, the Marathon bars and so much more, this next brand was likely intended to bring candy corn to the all-year-round crowd; Heide’s Chic’Korn Feed: 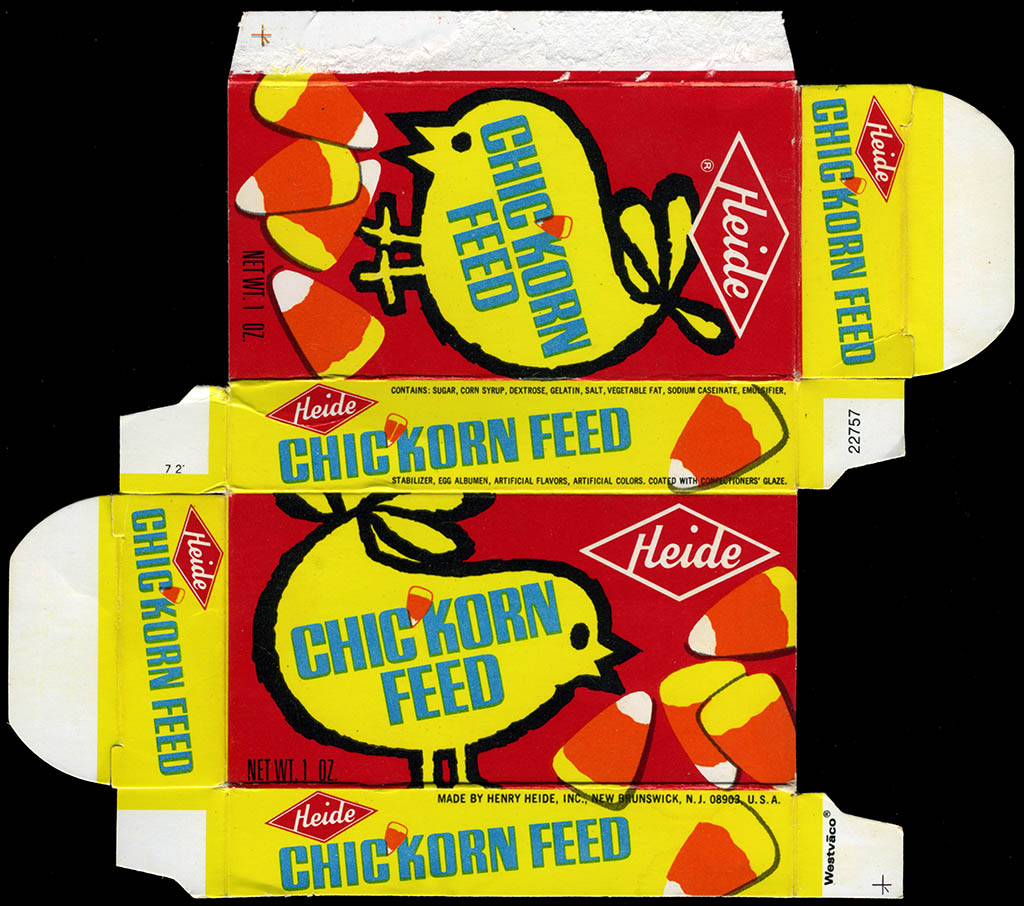 I love the look of that Heide box.  The graphic reminds me a bit of the chick from the classic Cadbury Creme Egg packaging.

Next up is a pretty plain bit of packaging, but one that goes way back to the 1950’s.  This one is from Curtiss, who were best-known for decades as the manufacturers of Baby Ruth and Butterfinger.  But they also made generic penny candy, which they packaged up and priced at 5-and-10-cents.  It is from that effort that this Curtiss candy corn package originated: 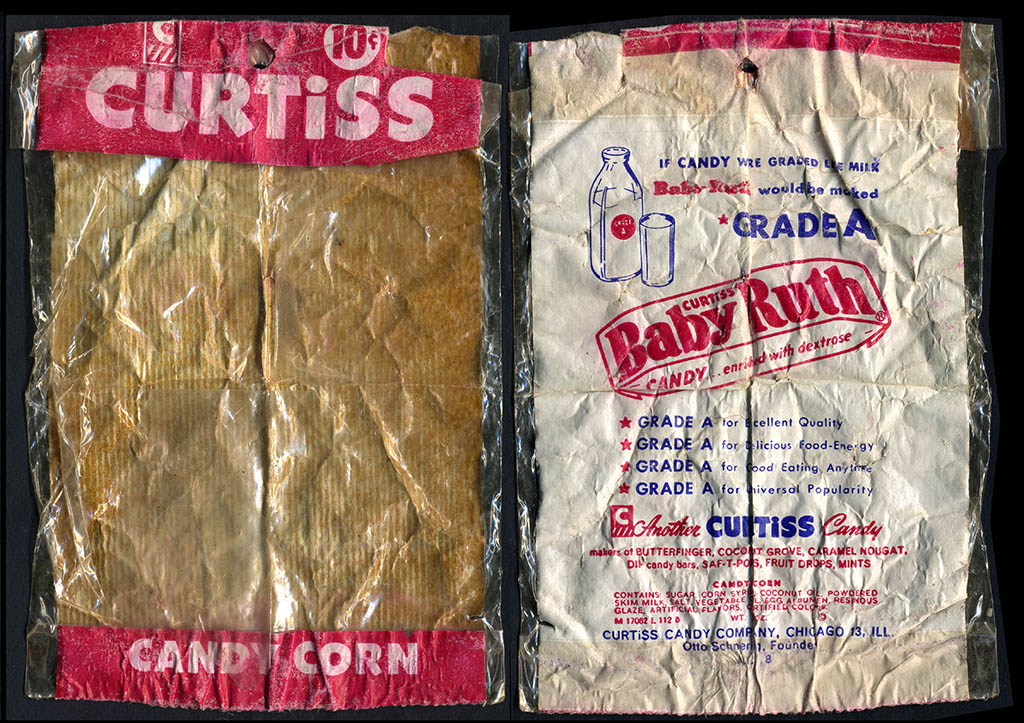 Rounding out today’s post are a pair of more recent offerings.  I photographed these some time ago with their contents intact.  They could certainly stand for a better photo session but for today, I think these will do just fine. 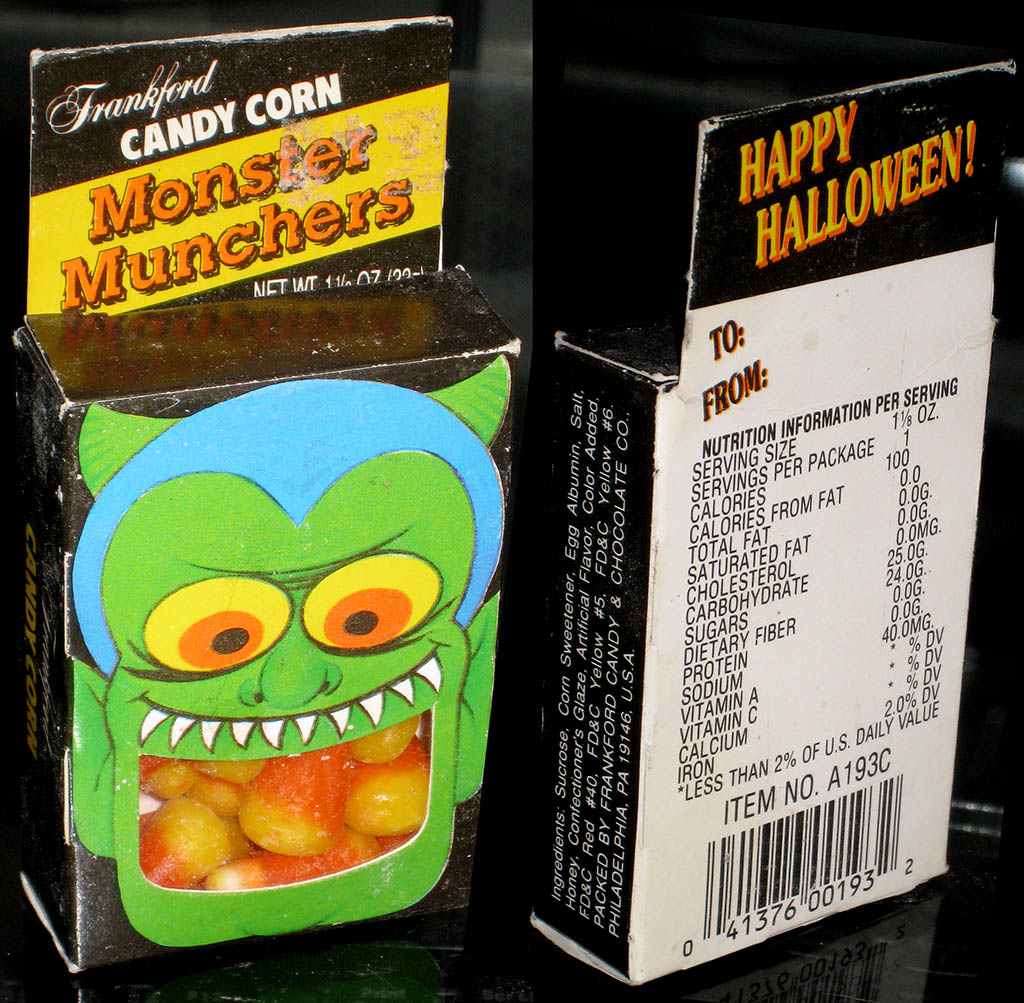 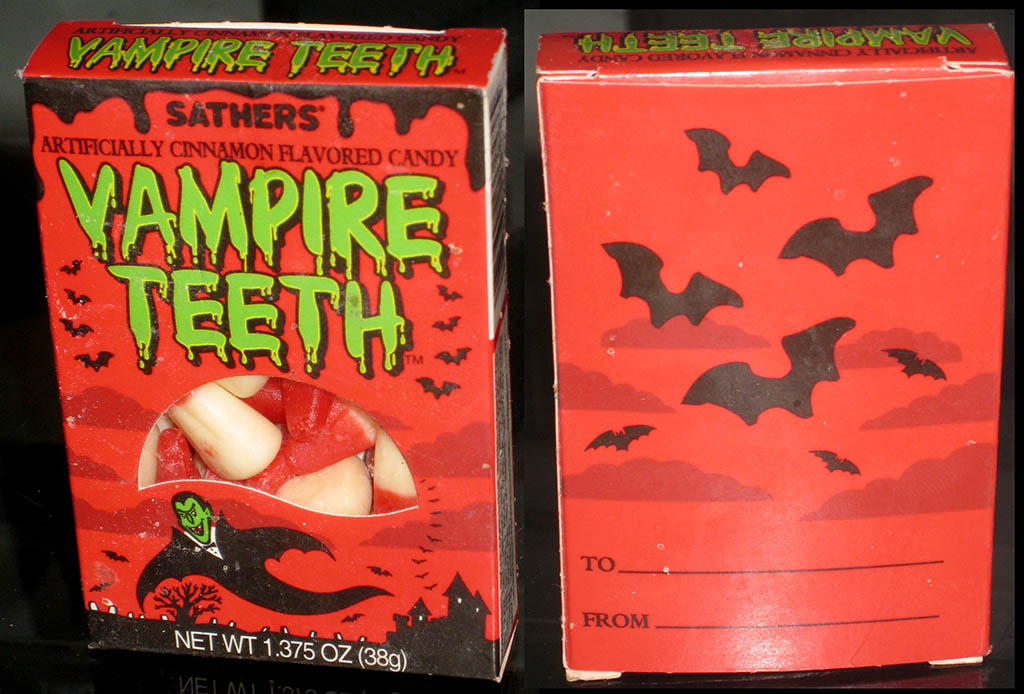 Note that those Vampire Teeth were “cinnamon-flavored” candy corn!  I suppose we’re a little spoiled with the variety of flavored candy corn these days – but when these came out, I think cinnamon candy corn was quite exotic.

And that’s everything I have to share on my Candy Corn in July post.  See you next time!

A New York City based writer, editor and sometimes actor. After spending much of the 1990′s in the comic book business helping tell the stories of Marvel Comics’ X-Men as series editor, he has since split his time between developing his own entertainment properties while still consulting and working on others. Having been described as “the Indiana Jones of lost and forgotten candy”, Jason is one of the country’s premier candy collectors and historians with his discoveries appearing in countless blogs, magazines, newspaper articles, and books. Always happy to share his knowledge and unique perspectives on this colorful part of our popular culture, Jason has consulted with New York’s Museum of Food and Drink and has also been a featured guest on Food Network’s Heavyweights, France’s M6 Capital, and New York’s TheActionRoom.com. My Google Profile+
View all posts by Jason Liebig →
This entry was posted in 1950's, 1970's, 1980's, 1990's, Boxed, Holiday, Novelty and tagged Brach's candy, candy collecting, candy collection, candy collector, candy wrapper collection, candy wrapper collector, collectible, collecting candy, confectionery, confections, Halloween, Halloween candy, holiday candy, packaging, sweets, vintage candy wrapper, wrapper. Bookmark the permalink.

3 Responses to Candy Corn in July!