Today, I have the pleasure of sharing a piece of candy packaging history you can’t see or read about anywhere else on the internet – it’s a CollectingCandy.com exclusive world premiere.

I don’t remember this product from my own youth, and I suspect few if any of you will.  My guess is that this was only out for a short time and then discontinued.

It’s one of the many gems that is part of the lost history of candy, though I’m doing my best to uncover and preserve pieces like this bit by bit (or Zitt by Zitt, in this case).

So, without further discussion, here is the package for Fleer’s Little Zitts: 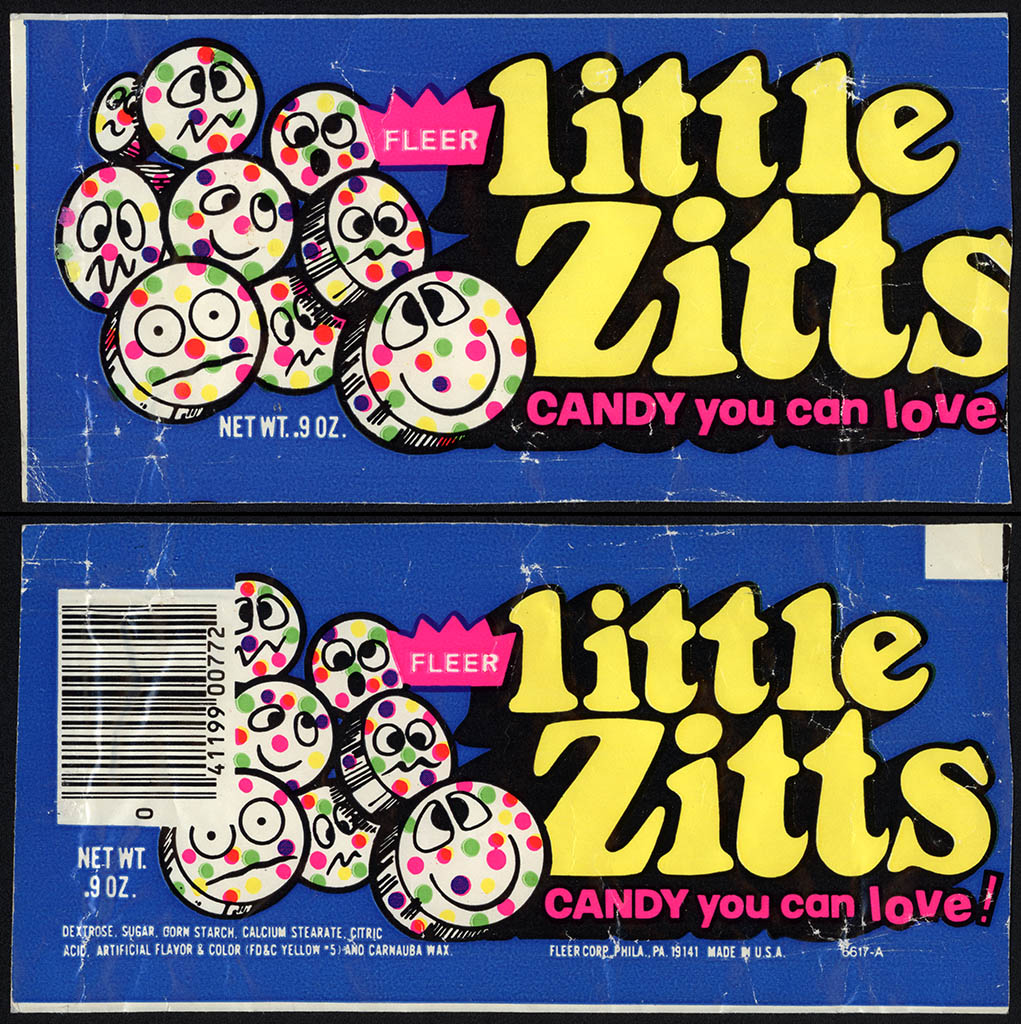 Likely dating from the 1977-1979 period, the package itself is about the size of a Fleer Razzles pack, but this was not a Razzles-like product.  Featuring a fun logo and great selection of little mascots, it’s a piece of vintage candy packaging I’m excited to get to show you today.

Nowadays, I’d expect any candy called “Zitts” to be a gross-out type of item, but that clearly wasn’t the case here.  Instead, this one aims to have some fun, even offering up the slogan “CANDY you can love!”

If anyone remembers Little Zitts, please comment and let me know – I’d love to hear about your recollection of them.   And that’s all for this Sunday.   See you next time!

A New York City based writer, editor and sometimes actor. After spending much of the 1990′s in the comic book business helping tell the stories of Marvel Comics’ X-Men as series editor, he has since split his time between developing his own entertainment properties while still consulting and working on others. Having been described as “the Indiana Jones of lost and forgotten candy”, Jason is one of the country’s premier candy collectors and historians with his discoveries appearing in countless blogs, magazines, newspaper articles, and books. Always happy to share his knowledge and unique perspectives on this colorful part of our popular culture, Jason has consulted with New York’s Museum of Food and Drink and has also been a featured guest on Food Network’s Heavyweights, France’s M6 Capital, and New York’s TheActionRoom.com. My Google Profile+
View all posts by Jason Liebig →
This entry was posted in 1970's, Fleer and tagged 1970's candy, 70's candy, candy collecting, candy collection, candy collector, candy mascots, candy wrapper collection, candy wrapper collector, collectible, collecting candy, confectionery, confections, Fleer candy, mascots, packaging, sweets, vintage candy wrapper, wrapper. Bookmark the permalink.