In 1982, the Willy Wonka company unveiled Nerds candies and they soon took the candy world by storm.   In 1985 Topps attempted to tap into that popularity by releasing a Nerds-like bubblegum product called Zooks (from Ba-zook-a).

Sold in small boxes with the look of multiple flip-tops (just like Nerds), each Zooks box only contained a single flavor and opening.   There was no need for the multiple flip tops on the box, but it’s safe to assume they were included as an attempt to more fully capture that Nerds box style novelty. 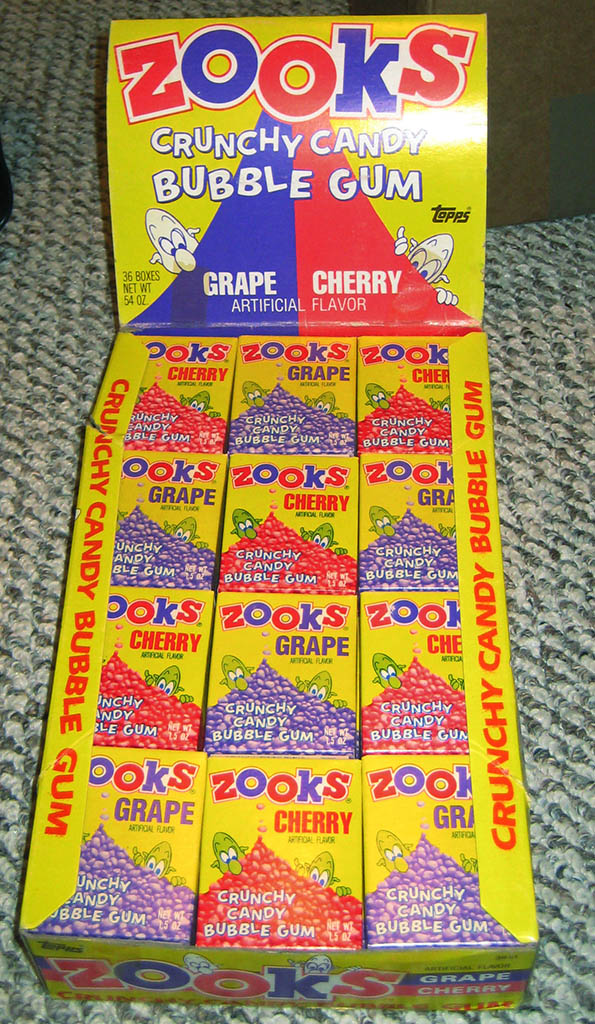 Here are a pair of scans of the two Zooks-flavor boxes, each one featuring a fun Zooks t-shirt mail-away offer: 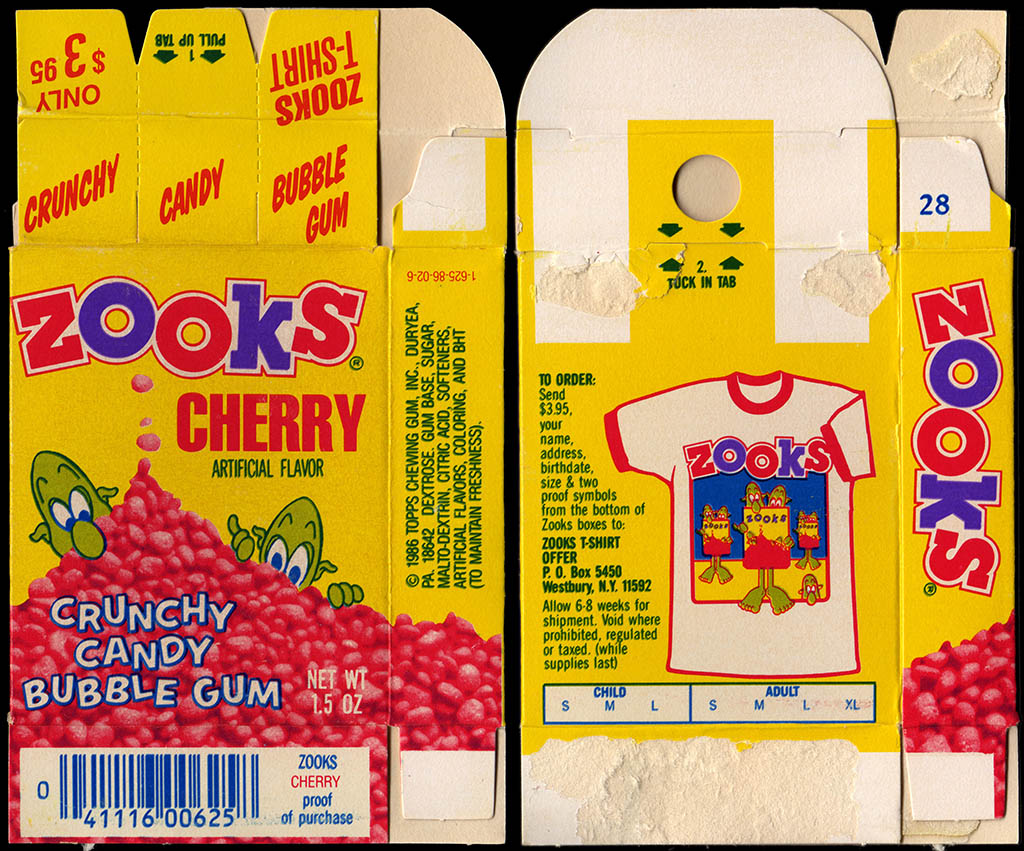 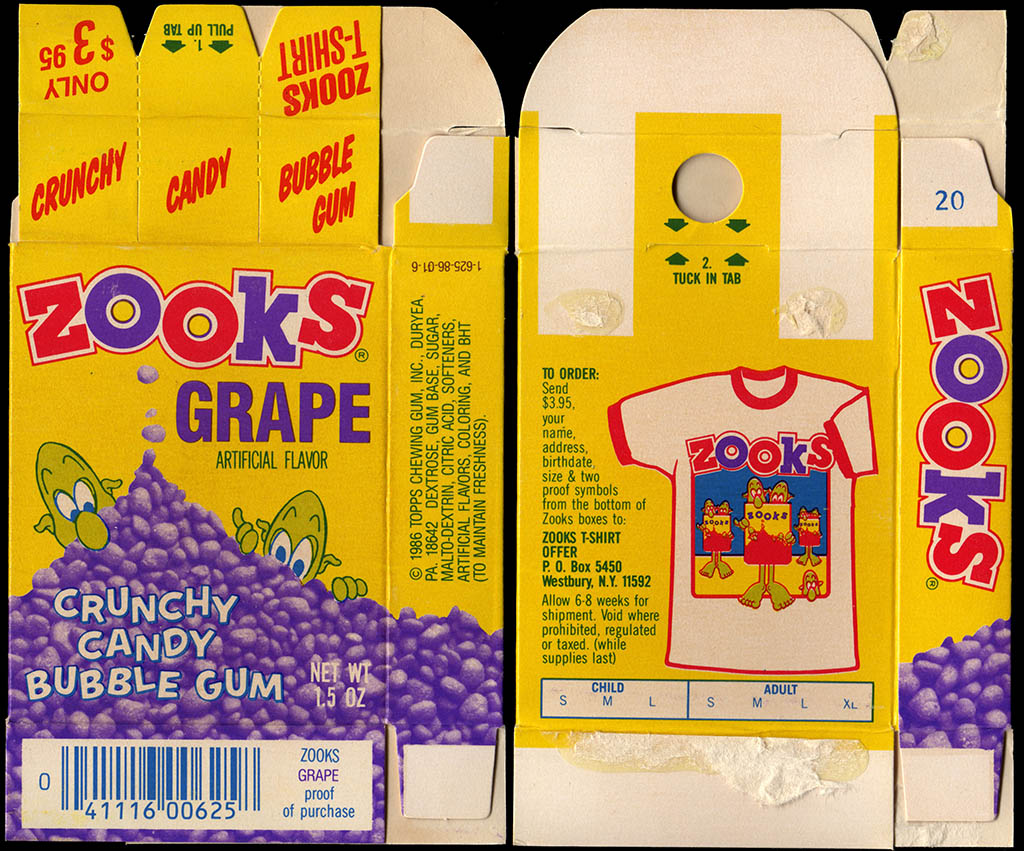 I have the back-panel from a different Zooks box that featured a mail-away for a standard Bazooka Joe t-shirt as well.  Here it is: 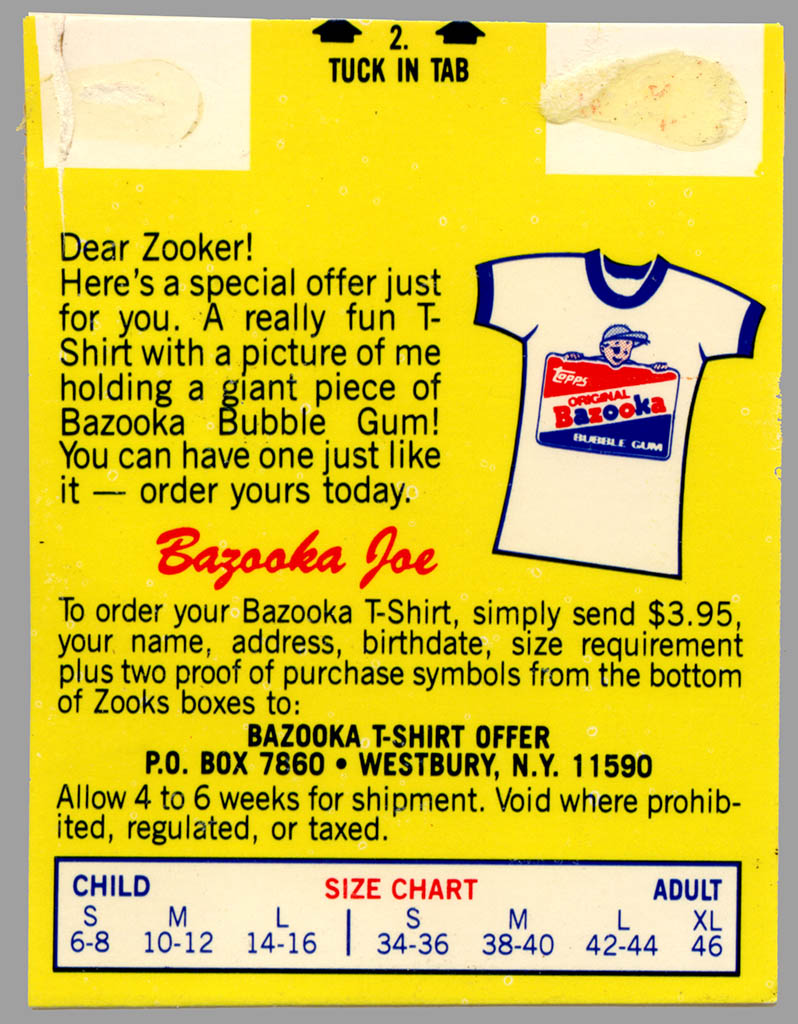 One last bit of fun to share today comes from the bottom of the Zooks display box.  Intended mainly for the mom-and-pop retailers that would be selling Zooks, this was a large Zooks-cash graphic proof-of-purchase, and I think it’s pretty awesome. 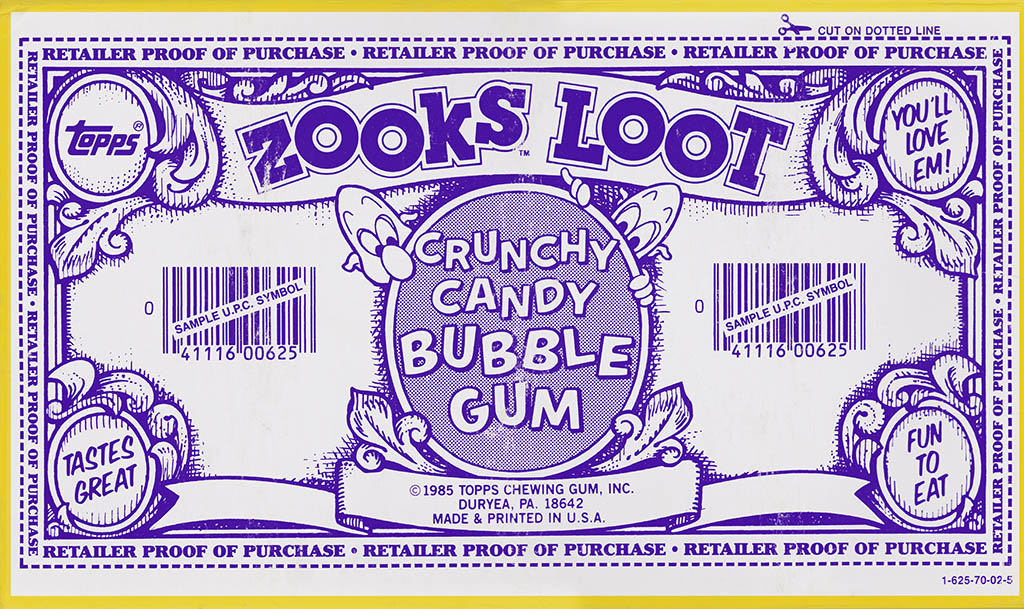 [Edit: Upon further inspection, I just realized that the graphics used for Zooks Loot are largely taken from Topps’ own Lotsa Loot, which I previously covered.]  I knew I liked this for some reason.  Check it out: 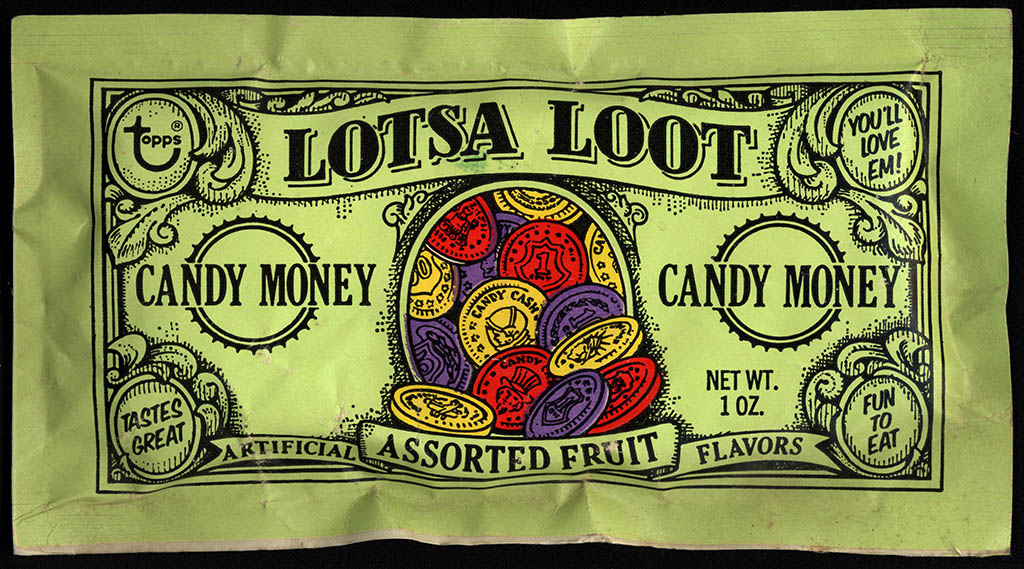 Though you could dismiss Zooks as just another Nerds rip-off, and I suppose it is largely that, there is quite a bit of clever fun here in the name and mascots.   The take-off of the Bazooka name with Zooks, and the Killroy-like green Zooks mascots are great – but it’s a shame they were tied to a product that was largely just an attempt to cash-in on the popularity of Nerds.

I think Zooks is a strong enough concept that Topps could have done something new with it and it would have worked.  For now, we can only imagine what might have been.

And that’s all I have to share on this short-lived Nerds-like product.  See you next time!

A New York City based writer, editor and sometimes actor. After spending much of the 1990′s in the comic book business helping tell the stories of Marvel Comics’ X-Men as series editor, he has since split his time between developing his own entertainment properties while still consulting and working on others. Having been described as “the Indiana Jones of lost and forgotten candy”, Jason is one of the country’s premier candy collectors and historians with his discoveries appearing in countless blogs, magazines, newspaper articles, and books. Always happy to share his knowledge and unique perspectives on this colorful part of our popular culture, Jason has consulted with New York’s Museum of Food and Drink and has also been a featured guest on Food Network’s Heavyweights, France’s M6 Capital, and New York’s TheActionRoom.com. My Google Profile+
View all posts by Jason Liebig →
This entry was posted in 1980's, Bubble Gum, Gum, Novelty, Topps and tagged 1980's candy, 80's candy, bubble gum, candy collecting, candy collection, candy collector, candy wrapper collection, candy wrapper collector, collectible, collecting candy, confectionery, confections, mascots, Nerds, packaging, sweets, vintage candy wrapper, wrapper. Bookmark the permalink.