When a Tennis Great Became a Chocolatey Treat – The Bjorn Borg candy bar!

Rafael Nadal gets knocked out in second round at Wimbeldon 2012 – Photo: Getty Images

When your focus is the history of candy packaging and marketing, it’s not easy to create posts that would be considered topical.  Yet I do often look for things that I can share that are connected to the news-of-the-day.  Sometimes I have to do a little bit of stretching to get there.  Today might be one of those cases.

I’ve been watching quite a lot of UK television lately; the BBC channels of course, but other UK stations as well.  It’s been fun getting up-to-speed on the Jubilee, the upcoming Olympics, Mrs Browns Boys, the Barclays banking scandal, and of course, Wimbeldon 2012.

I don’t have anything candy-related connected to Barclays or banks, and my Jubilee goodies have yet to arrive (they are coming from our Norwich field office), but I do have something for tennis.  So, when I flipped on my UK-telly last night to learn that shockingly, Rafael Nadal had been upset in Wimbeldon’s second round, I figured it would be the perfect excuse for me to share my tennis-related candy wrapper.  Perhaps it would ease the collective unrest from Nadal’s early Wimbeldon exit.

With that introduction out of the way, here is the only tennis-player confection I’ve ever come across, the Bjorn Borg Bar: 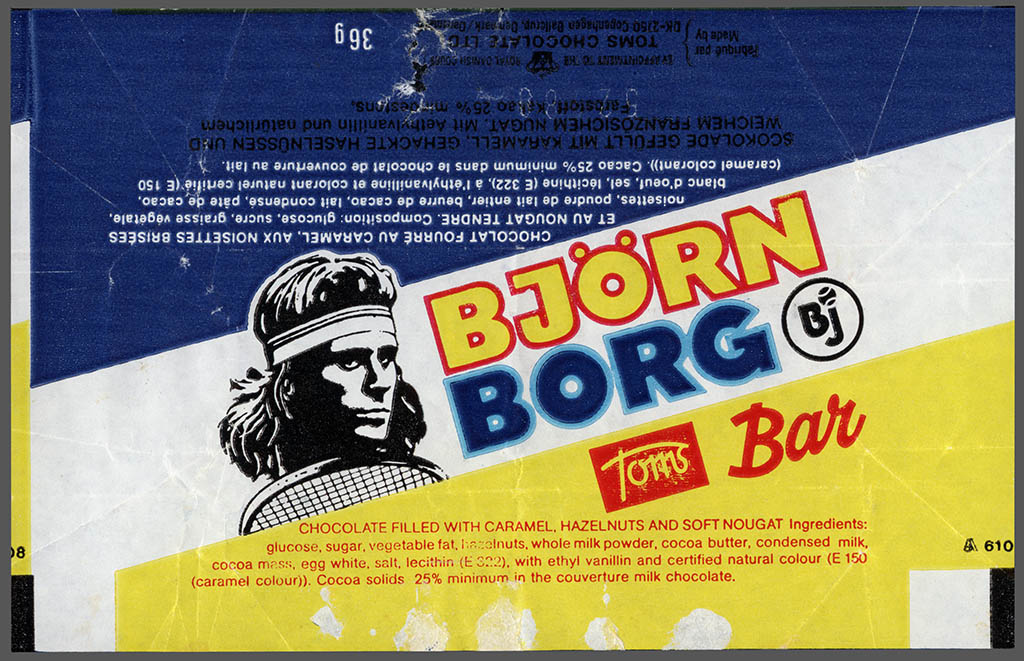 For those that don’t know, Bjorn Borg has been referred to as the first “rock star” of the mens’ tennis circuit.  He was hugely successful, and was one of the first players to earn a million dollars in a single year of competition.  He was also marketed in ways that players before him never were – this candy bar included.  I won’t bore you with more details of the man, Google will provide most anything you’d want to know about his career.

The salient point today is that the guy was a phenomenon, and like a few other pro athletes through the years, his fame earned him a spot on a candy bar wrapper.  And this, during a time when it was far less common for that to occur.

And that’s all the info I have to share on the Bjorn Borg bar.  I hope you found this post as interesting as it was unexpected.  See ya next time!

A New York City based writer, editor and sometimes actor. After spending much of the 1990′s in the comic book business helping tell the stories of Marvel Comics’ X-Men as series editor, he has since split his time between developing his own entertainment properties while still consulting and working on others. Having been described as “the Indiana Jones of lost and forgotten candy”, Jason is one of the country’s premier candy collectors and historians with his discoveries appearing in countless blogs, magazines, newspaper articles, and books. Always happy to share his knowledge and unique perspectives on this colorful part of our popular culture, Jason has consulted with New York’s Museum of Food and Drink and has also been a featured guest on Food Network’s Heavyweights, France’s M6 Capital, and New York’s TheActionRoom.com. My Google Profile+
View all posts by Jason Liebig →
This entry was posted in 1970's, 1980's, Uncategorized and tagged 2012, candy collecting, candy collection, candy collector, candy wrapper collection, candy wrapper collector, collectible, collecting candy, confectionery, confections, Nadal, packaging, sports candy, sweets, tennis, vintage candy wrapper, Wimbeldon, wrapper. Bookmark the permalink.

1 Response to When a Tennis Great Became a Chocolatey Treat – The Bjorn Borg candy bar!