Though I spend the bulk of my time researching and hunting down candy packaging from the past, I still do like to pick up contemporary releases, especially new or odd things.   While finding the vintage stuff is hard, it might surprise you to learn that sometimes it can be pretty difficult to track down new stuff, too.

Take, for instance, some of the recent holiday releases of Big League Chew – I’d had friends and family on the lookout for the Easter pouches but only ever found one of the two variety released earlier this year.

So when I learned that Nestle Crunch would be releasing a trio of limited run bars inspired by Girl Scout Cookie favorites I put all of my collector-feelers out to track them down.  For the first couple of weeks, the hunt was dry – no one was able to turn up a single sighting of these.

Fortunately, this week I stumbled upon all three; the Thin Mint in a nearby CVS store and the remaining two in the heart of New York City’s Times Square – at the flagship Walgreens store there.

I really dig the packaging, as each one features an image of the cookie that inspired them as well as the Girl Scouts logo.  So there are a number of nice touches here.

On to the wrappers: 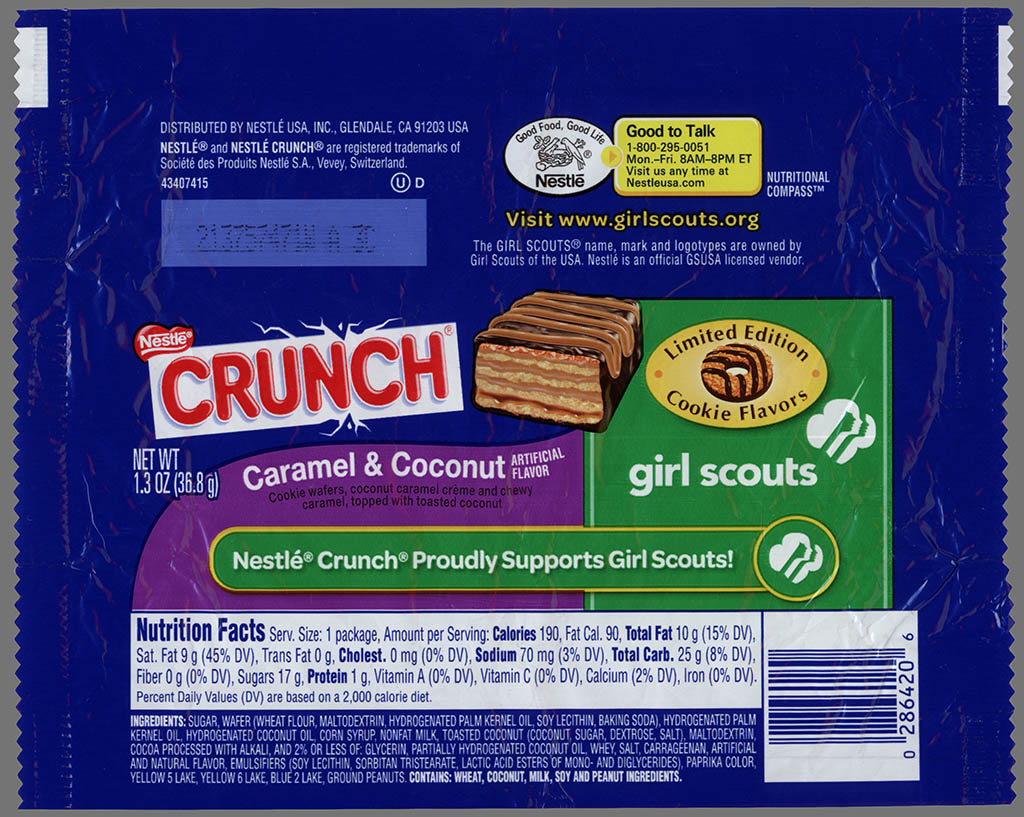 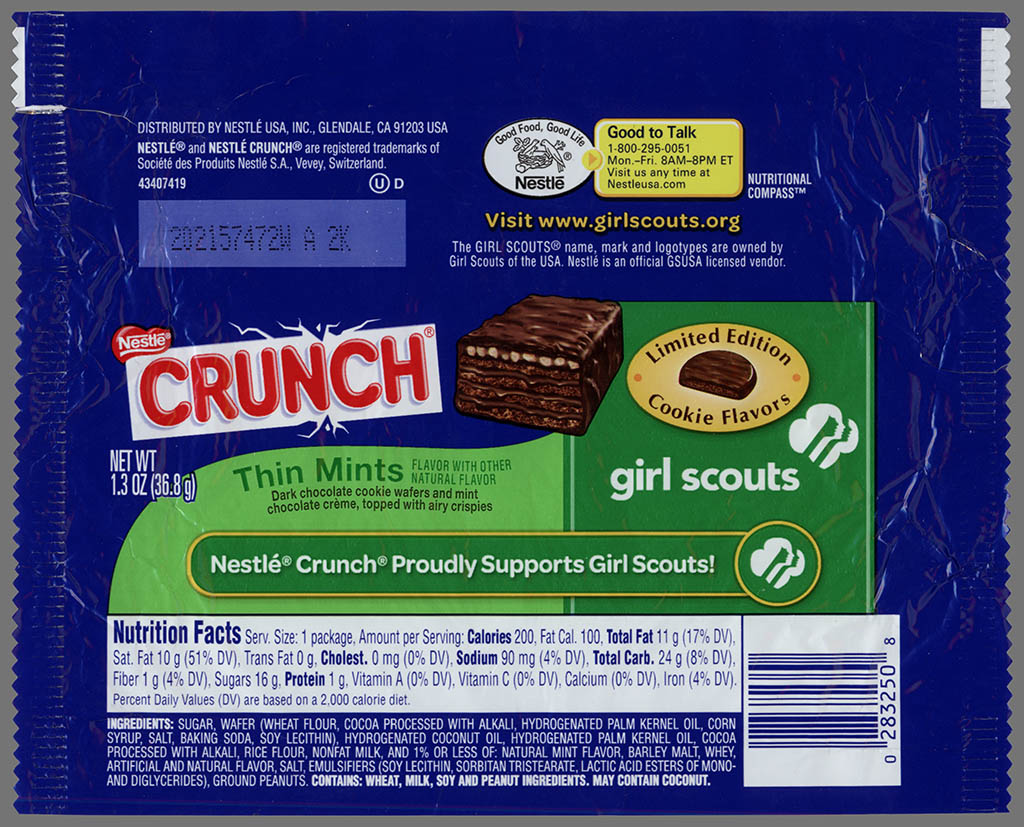 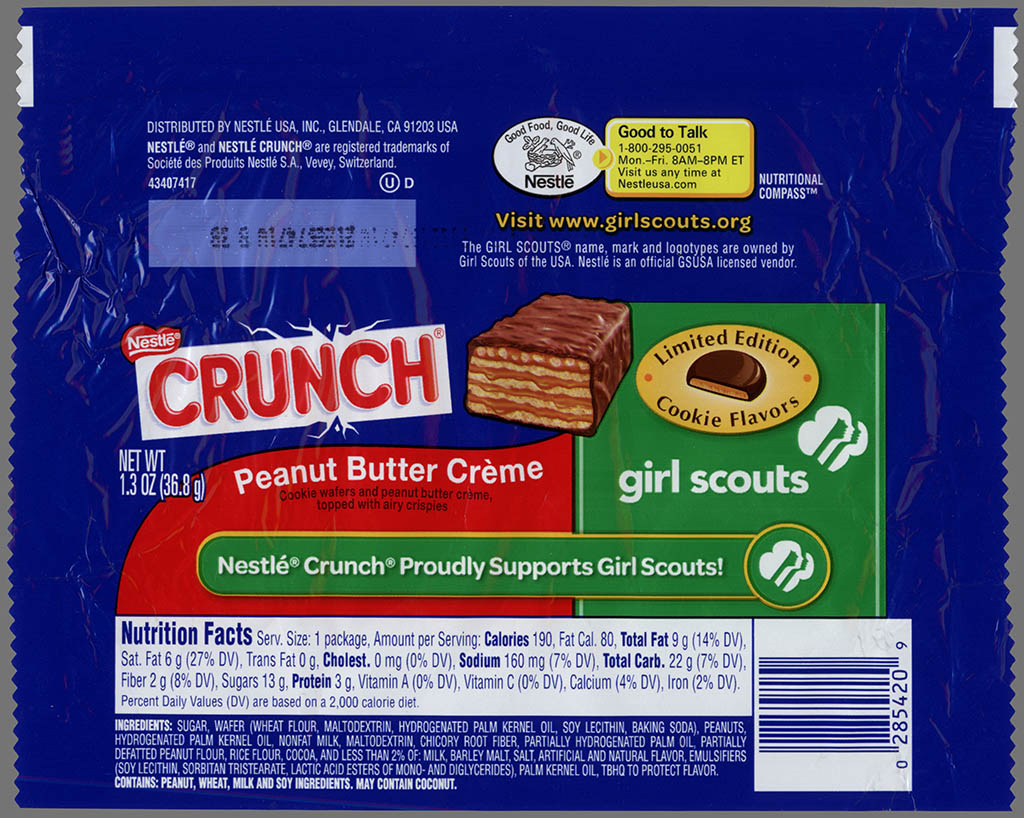 I will note that these were tough wrappers to open without having them shred and tear along the way.  Many modern wrappers are designed like this.  They have the ironic ability to secure and protect the contents from damage, but at the same time are designed to be easily opened when a consumer wants to get to the contents.  Unfortunately, they don’t take into account the candy wrapper collector.  Due to that, I’ve had to figure out ways to help avoid the tearing and shredding that is commonplace among modern-day wrapper opening.  After a suggestion by my pal Neato Coolville, I’ll be devoting a future article to the various methods and tools I’ve developed where that’s concerned.

And that’s really all I’ve got to say about these today.  See you next time!

A New York City based writer, editor and sometimes actor. After spending much of the 1990′s in the comic book business helping tell the stories of Marvel Comics’ X-Men as series editor, he has since split his time between developing his own entertainment properties while still consulting and working on others. Having been described as “the Indiana Jones of lost and forgotten candy”, Jason is one of the country’s premier candy collectors and historians with his discoveries appearing in countless blogs, magazines, newspaper articles, and books. Always happy to share his knowledge and unique perspectives on this colorful part of our popular culture, Jason has consulted with New York’s Museum of Food and Drink and has also been a featured guest on Food Network’s Heavyweights, France’s M6 Capital, and New York’s TheActionRoom.com. My Google Profile+
View all posts by Jason Liebig →
This entry was posted in Chocolate, cookies, Nestle and tagged candy collecting, candy collection, candy collector, candy wrapper collecting, candy wrapper collection, Nestle Girl Scout Cookie bars. Bookmark the permalink.