I’m sure it’s been done elsewhere, but this is the only time I’ve come across a wrapper for this particular confectionery combination.  Yes, from out of the 1990’s and Cadbury’s New Zealand branch, this treat served up an ordinary chocolate bar infused with fruit-flavored “jelly worms”.

I’ve found that New Zealand’s arm of Cadbury was trying some wonderfully-bold releases in the 1990’s and this stands as one of my favorites.  Here’s an example of one of the wrappers – this one is an unused proof, likely cut from a roll.  Also of note; this one is a foil wrapper, and it’s tough to capture the look of a foil wrapper with a scanner (they’re much more striking in person).  In spite of that, even a scan presents much of what I find so appealing about this one: 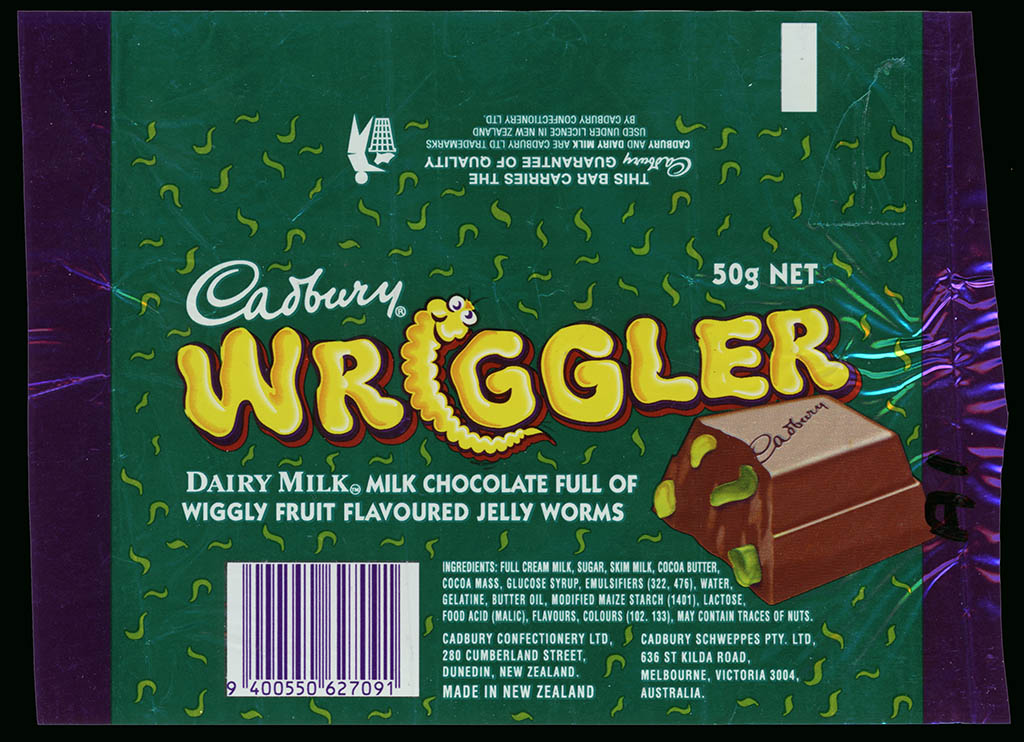 That is the Wriggler, a bold mix of treats mixed into one bar, with a striking wrapper and fun mascot to top it off.  I’m not sure how long this one lasted – my guess is that it was a short-lived treat.   I’ve only ever come across a wrapper once.

That’s all for today’s brief entry.  I’m working on a whopper of an article that I hope to have ready by tomorrow, so make sure to drop by.  See you next time!

A New York City based writer, editor and sometimes actor. After spending much of the 1990′s in the comic book business helping tell the stories of Marvel Comics’ X-Men as series editor, he has since split his time between developing his own entertainment properties while still consulting and working on others. Having been described as “the Indiana Jones of lost and forgotten candy”, Jason is one of the country’s premier candy collectors and historians with his discoveries appearing in countless blogs, magazines, newspaper articles, and books. Always happy to share his knowledge and unique perspectives on this colorful part of our popular culture, Jason has consulted with New York’s Museum of Food and Drink and has also been a featured guest on Food Network’s Heavyweights, France’s M6 Capital, and New York’s TheActionRoom.com. My Google Profile+
View all posts by Jason Liebig →
This entry was posted in 1990's, Chocolate, Novelty and tagged 1990's, 90's, Cadbury, Cadbury's, candy collecting, candy collection, candy collector, candy wrapper collection, candy wrapper collector, chocolate, chocolate wrapper, confectionery, gummi worms, gummy worms, mascot, New Zealand, old candy wrapper, old chocolate wrapper, packaging, sweets, vintage candy wrapper, vintage chocolate wrapper, wrapper. Bookmark the permalink.