Celebrating the 30th Anniversary of E.T. The Extra Terrestrial – CollectingCandy-style! 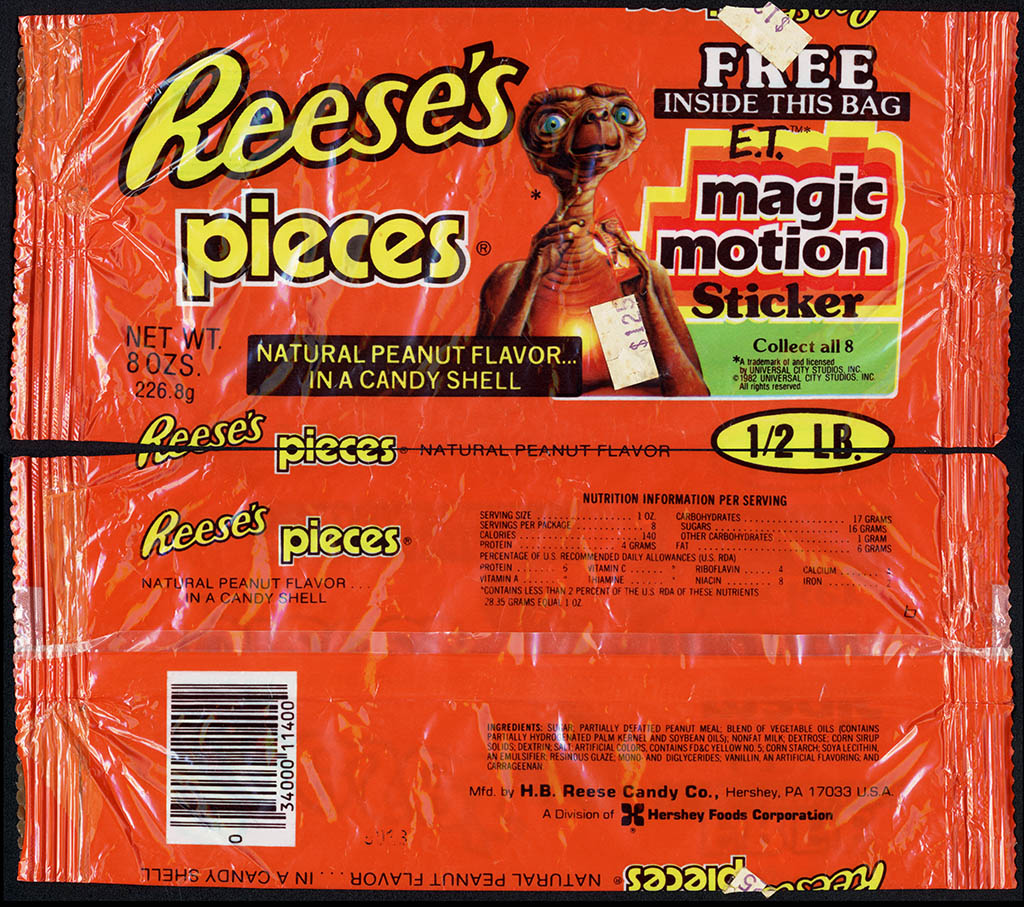 I somehow missed that yesterday was the 30th Anniversary of the original release of E.T. The Extra Terrestrial – a classic film that contains a classic candy tie-in.  That tie-in being Reese’s Pieces.  A day late it might be, but today’s column will acknowledge and celebrate that anniversary and the candy-connection it created.

E.T. helped solidify Reese’s Pieces as a favorite among millions of kids, but did you know that it almost wasn’t Reese’s Pieces that would be used to lure that cute alien around?

As it turns out, the original candy that they had planned to use were M&M’s, but according to this 1982 Time magazine clipping, M&M/Mars wouldn’t give permission for their product to be included in the film.

So Hershey made the right decision and a confectionery cinematic bond was formed.   For years you really couldn’t think about Reese’s Pieces without thinking of E.T.   The style of packaging seen in the film was a large, one-pound bag.  Based on my research, this is the exact version seen in the film: 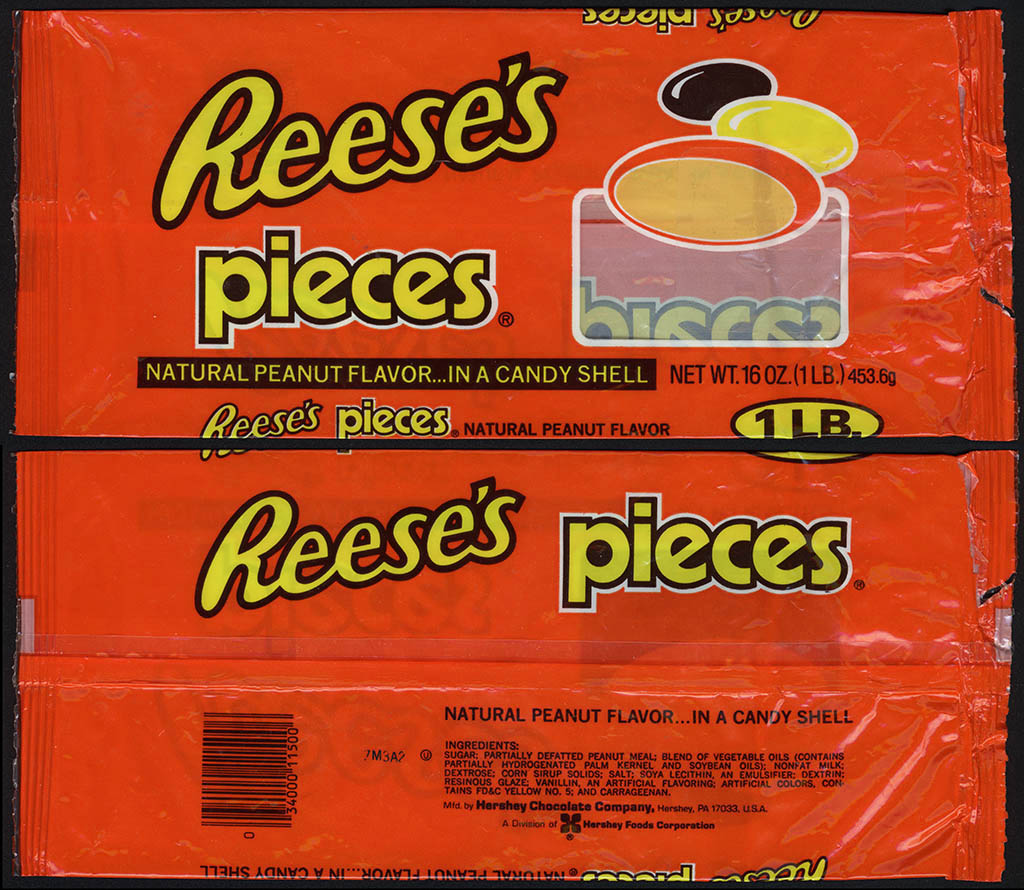 There was the Magic Motion sticker promotion seen on today’s title image, as well as a fun t-shirt promotion that was affixed to large 1-pound bags as well.  Here’s a peel-away featuring the offer: 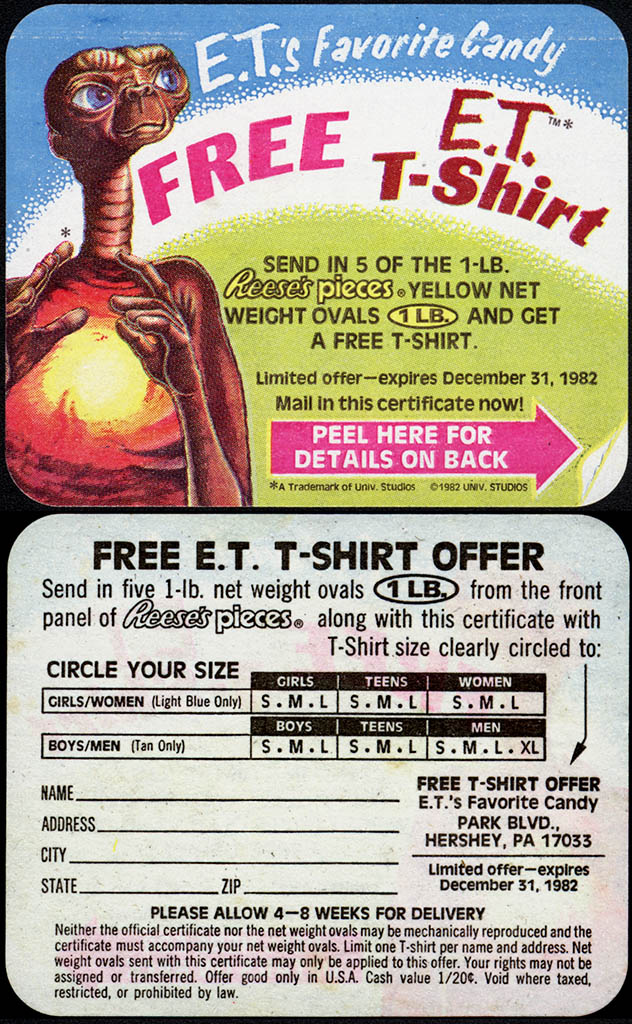 While Reese’s Pieces received the lion’s share of attention thanks to the film, PEZ also got some kind of mention – though I don’t recall exactly where they show up in the movie.  I only remembered, because I found this interesting insert card that was likely included in PEZ cello packages at the time.

And that’s nearly everything I’ve got that connects candy and E.T.

One final piece I’d like to share today comes from across the pond, courtesy the United Kingdom branch of Nabisco.  As much a cookie as it is a candy (but so is a Twix), it had to be included.  This would have probably been sold out of a standard candy rack, included right along with the other confections.  Take note of the utter British-ness of the thing – it’s a cola-flavored cream cookie.  Yum? 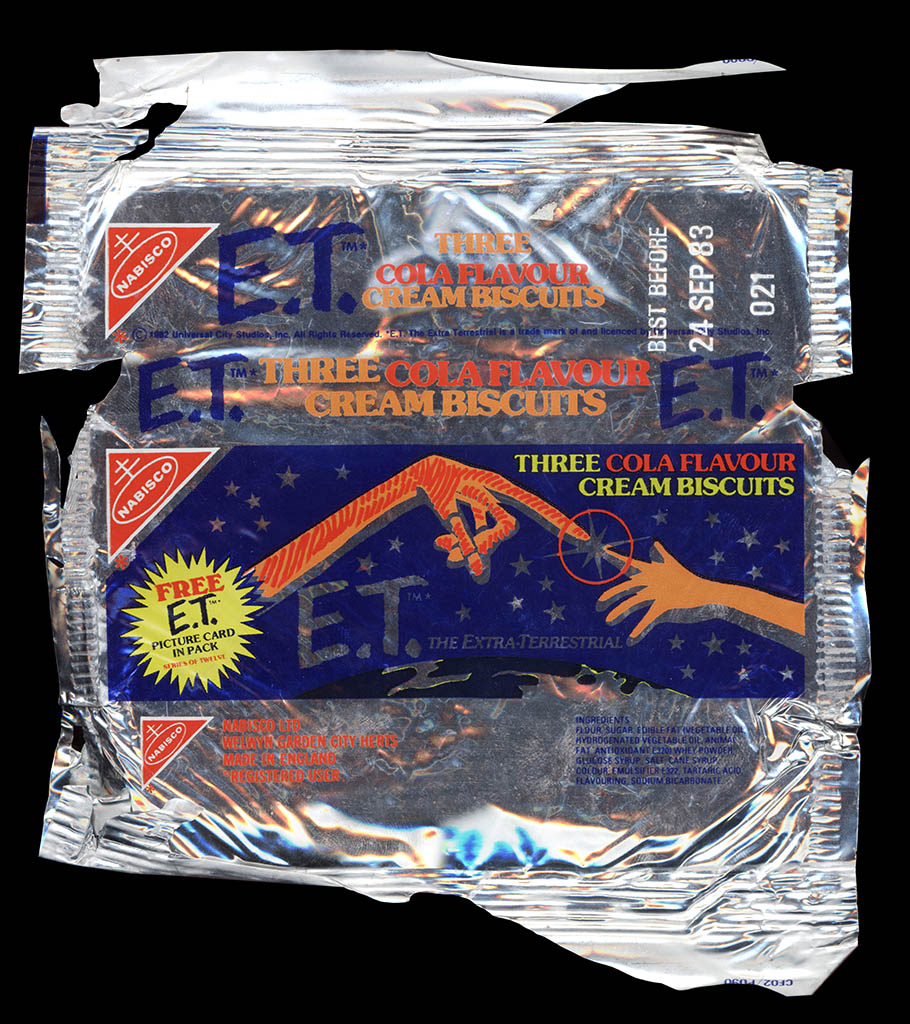 And that wraps up our CollectingCandy.com celebration of E.T.’s 30th Anniversary.  I hope you enjoyed seeing these unusual pieces of E.T.’s confectionery past.  See you next time!

A New York City based writer, editor and sometimes actor. After spending much of the 1990′s in the comic book business helping tell the stories of Marvel Comics’ X-Men as series editor, he has since split his time between developing his own entertainment properties while still consulting and working on others. Having been described as “the Indiana Jones of lost and forgotten candy”, Jason is one of the country’s premier candy collectors and historians with his discoveries appearing in countless blogs, magazines, newspaper articles, and books. Always happy to share his knowledge and unique perspectives on this colorful part of our popular culture, Jason has consulted with New York’s Museum of Food and Drink and has also been a featured guest on Food Network’s Heavyweights, France’s M6 Capital, and New York’s TheActionRoom.com. My Google Profile+
View all posts by Jason Liebig →
This entry was posted in 1980's, Hershey, M&M's and tagged 1980's, 80's, candy, candy collecting, candy collection, collecting candy, collection, confectionery, E.T., film, Hershey, movies, packaging, peanut butter, Reese's Pieces, retro, Spielberg, sweets, United Kingdom, vintage, wrapper. Bookmark the permalink.

5 Responses to Celebrating the 30th Anniversary of E.T. The Extra Terrestrial – CollectingCandy-style!