A Gem of a Middle Eastern M&M’s pack.

As a candy collector, I’m routinely surprised by the things I find that I never knew existed.  Typically this involves items that were made twenty and thirty years ago, sometimes even further back.  But occasionally something comes to me that isn’t that old at all, but still slaps me across the face with how cool and unexpected it is.

Such is the case with a limited edition M&M’s Almond package from 2006.  I believe this one originated from M&M’s GCC division in Dubai, and the package design and colors are gorgeous. 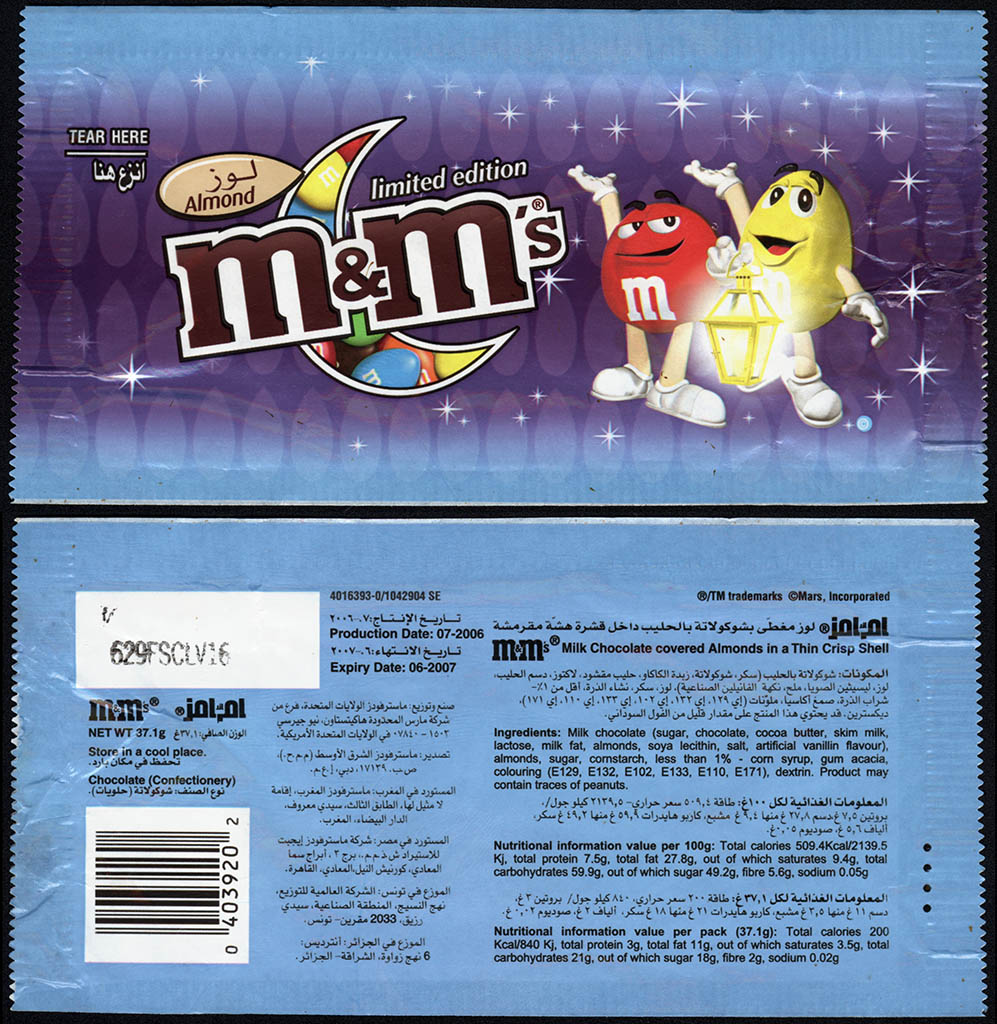 I dig everything about this packaging.  It’s got the classic mascots I know, as well as the great M&M’s logo, but there’s the addition of the crescent moon element (a symbol tied to many Islamic holidays and Middle Eastern flags, I believe).  The mascots also appear to be holding some kind of antique lamp, which I’m guessing has some other significance?  Beyond that, the colors and almond shape motif and stars in the background make this one of the prettiest M&M’s packages I’ve ever seen.

As a collector, I can’t help but wonder what other cool international packaging variations of American brands that I’m missing out on.  I manage to catch some of the cool Japanese Kit Kats on eBay, and have snagged some of the Australian ones, but pieces like this?  I’ll likely never find these unless I’m very lucky, as I was in this case.

If anyone can tell me more about the design on this one, or you ever spot a cool International version of a US brand abroad, drop me a line!   And that’s all for today.

A New York City based writer, editor and sometimes actor. After spending much of the 1990′s in the comic book business helping tell the stories of Marvel Comics’ X-Men as series editor, he has since split his time between developing his own entertainment properties while still consulting and working on others. Having been described as “the Indiana Jones of lost and forgotten candy”, Jason is one of the country’s premier candy collectors and historians with his discoveries appearing in countless blogs, magazines, newspaper articles, and books. Always happy to share his knowledge and unique perspectives on this colorful part of our popular culture, Jason has consulted with New York’s Museum of Food and Drink and has also been a featured guest on Food Network’s Heavyweights, France’s M6 Capital, and New York’s TheActionRoom.com. My Google Profile+
View all posts by Jason Liebig →
This entry was posted in Chocolate, M&M's and tagged candy, candy collecting, candy collection, candy wrapper, chocolate, collectible, collection, Islam, limited edition, M&M's, Mars, Mars GCC, mascot, Middle Eastern. Bookmark the permalink.

1 Response to A Gem of a Middle Eastern M&M’s pack.