One of the reasons this site exists at all is that the visuals of candy history are typically short in supply, and oftentimes lost forever.  It’s unusual to come upon a vintage photo of candy, let alone an actual wrapper or box.  So, when you find a historical confectionery photo, it can be a lot of fun, especially when it’s a photo of a fully populated sales rack of candy.

Today, I’m presenting a two-page article from a 1975 candy trade magazine, which includes three great photos in service of the topic of merchandising. 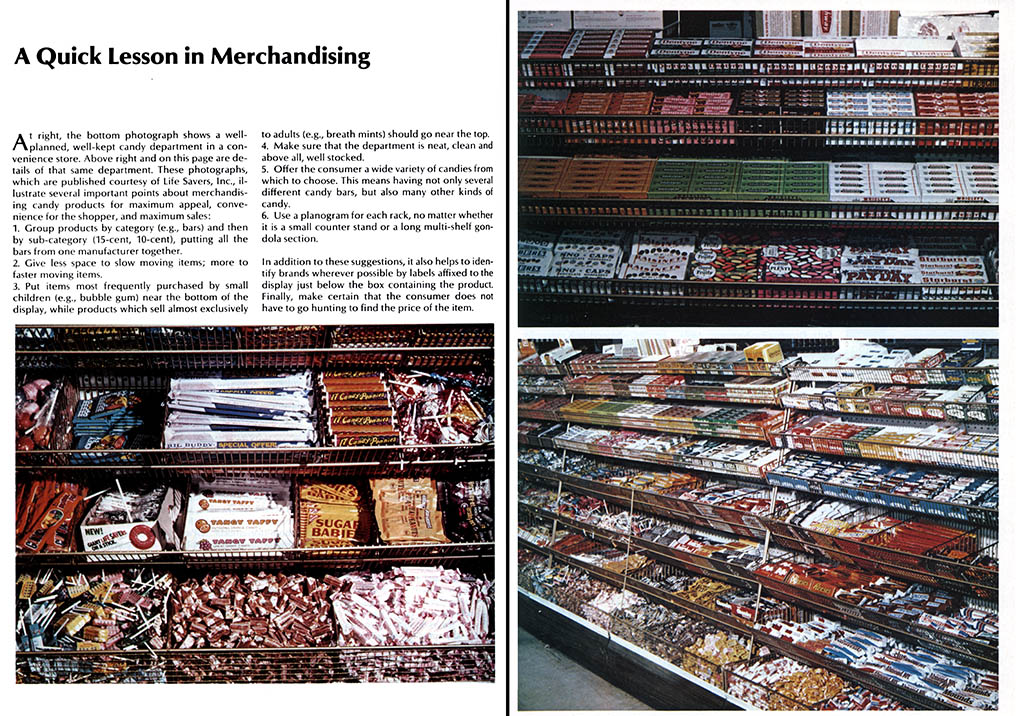 As you can see, these two pages are just loaded with awesome 1970’s candy imagery.  I’m going to present a close-up of each, with a few comments to follow.

Our first image is a great, straight-on shot, with a lot of great candy and gum. 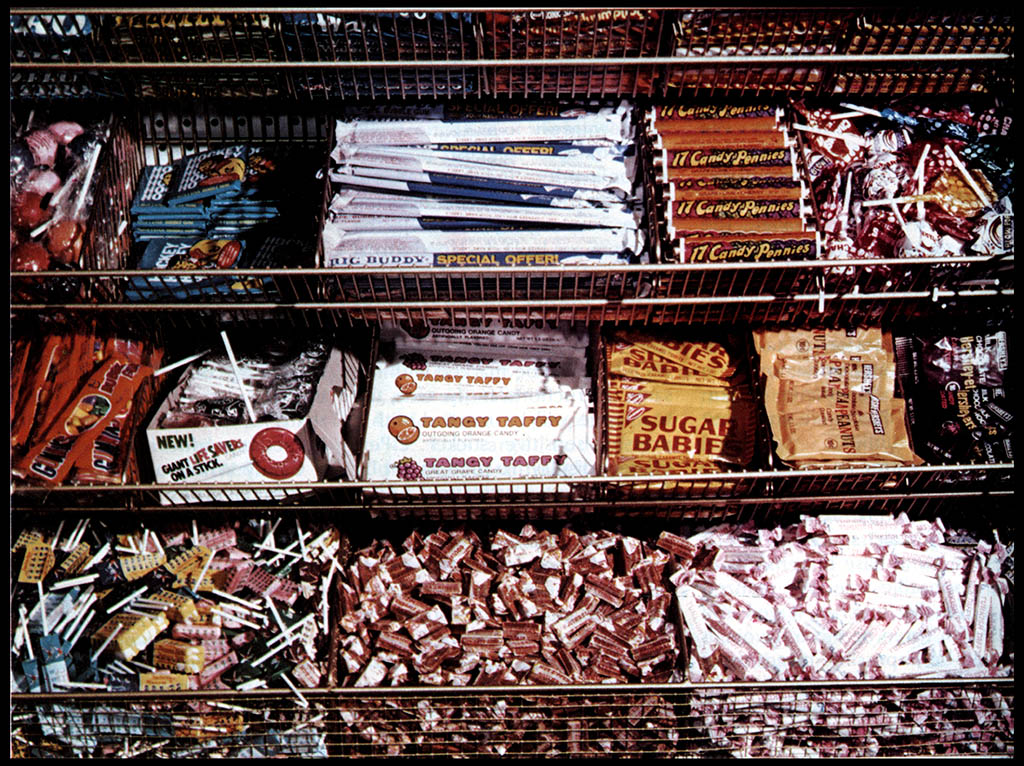 Here we can see Lifesavers Pops, which were new in 1975, Sugar Babies, Topps’ Big Buddy, Topps’ Gumnicks, and more.  Topps Candy Pennies, which I mentioned way back in my Lotsa Loot article, are something I’ve been hunting for, for a while.  This image also presents a great lineup of Tangy Taffy (later to become part of the Wonka Family and renamed to Laffy Taffy).

Next up is a shot of a candy/gum rack (with some Archway cookies tucked in behind them): 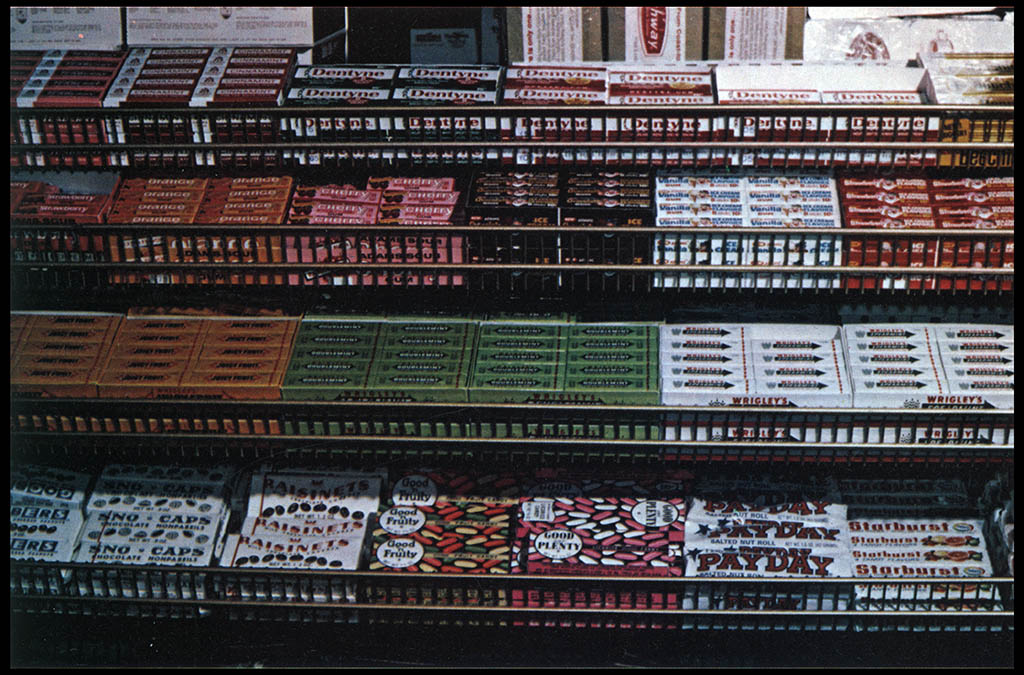 My favorite bit of this image is the bottom line-up of candy boxes, as well as the early white Starburst pack at the end.  Great stuff.

The last image is one I’m going to spend a little more time on.  It’s an angular perspective, which presents a LOT of candy to see, and because of that, it’s my favorite of the three pictures: 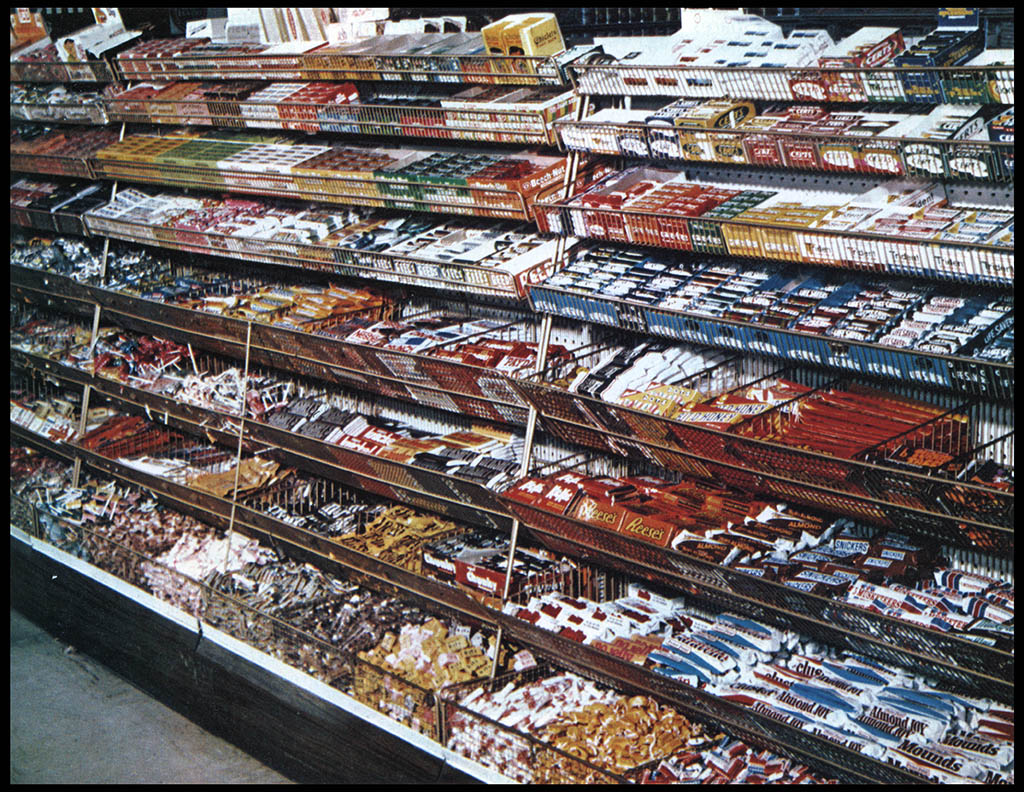 This last image is the one I’ve spent the most time dissecting and examining, and in some cases it hasn’t been easy or obvious just what I’ve been looking at.   Without a doubt, there’s a great cross-section of chocolate bars here, and that makes them worthy of their own close-up: 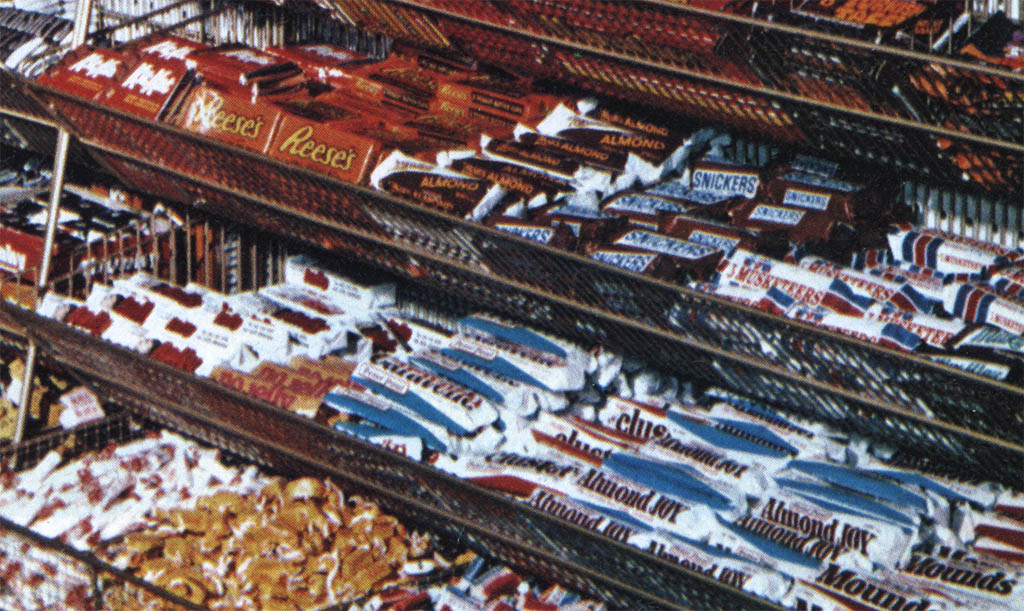 Close-up of the chocolate bars.

So it’s a great selection of 1970’s classics, but there are some fun nuggets hidden around this one.  I’m going to show you the image again, with four areas highlighted, and then explain why I’ve highlighted them.  This is a bit of a photo-hunt-exposition: 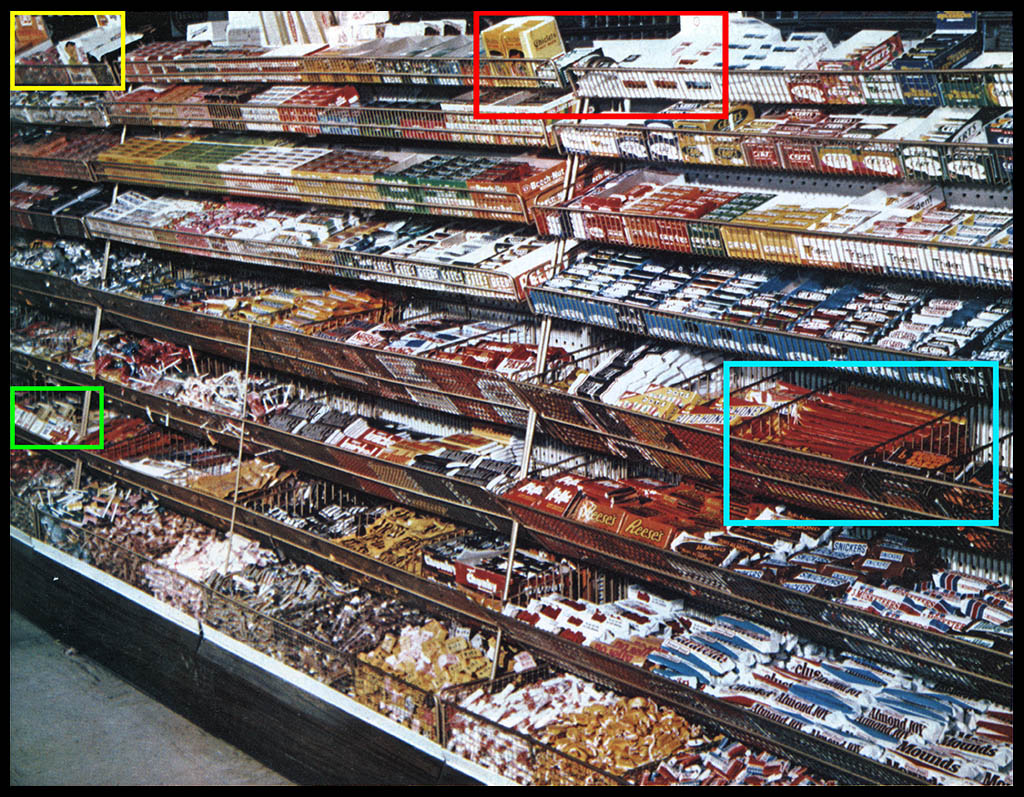 First up in yellow you can just make out a display box for Fun Dip: 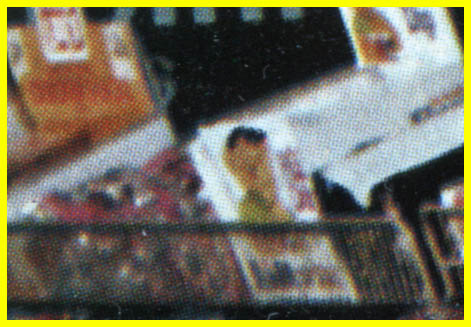 It’s great to see Fun Dip on actual store shelves, all the way back in 1975.

Next up, tiny Chiclets and Dynamints:

There’s a great shot of a display box for Chiclets Tiny Size packs with kid-characters on them, as well as the two original flavors of Dynamints.   For those too young to remember, Dynamints were a small mint, much like Tic Tacs.

Next up… a whole bunch of Marathon bars: 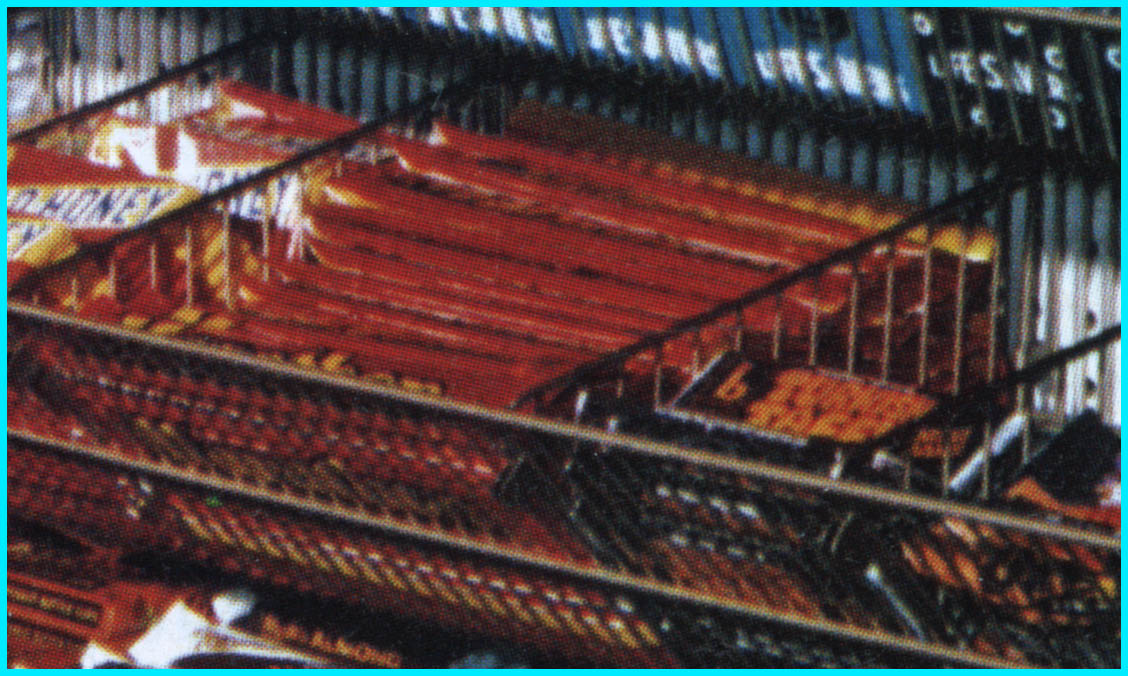 I just love this close-up because in it you see more Marathon bars (and Marathon bar wrappers) than likely still exist today.  All in one place.  Also, a nice bit of Bonomo Turkish Taffy there, and finally all the way at the right, you see ends of several packs of Willy Wonka Oompas.

And now for the last highlight: 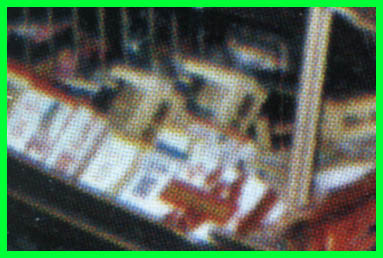 It’s difficult to make out here, but this image is remarkable for a couple of reasons.   First, in the foreground is a Heide Red Hot Dollars box, but that’s not what is so awesome about this.  It’s that we see several mid-70’s Milk Duds boxes, and finally, lined-up as a trio, the original three “flavored” Duds boxes; Cherry Duds, Banana Duds, and Grape Duds.  Even though it’s just a few smudges of color, this is currently the only known image of a Banana or Cherry Duds box.   Which is kind of crazy…  but there you go.

Flavored Duds are an especially big favorite of mine, and pieces which I’ve been hunting for for years, and I’ll be doing a post dedicated to them later on.

And that’s all for today.  I hope you’ve enjoyed this little CollectingCandy.com Photo Hunt – and I hope it’s clear that when you’re really into this stuff, photos like these present quite a lot of enjoyment.  See you next time!

A New York City based writer, editor and sometimes actor. After spending much of the 1990′s in the comic book business helping tell the stories of Marvel Comics’ X-Men as series editor, he has since split his time between developing his own entertainment properties while still consulting and working on others. Having been described as “the Indiana Jones of lost and forgotten candy”, Jason is one of the country’s premier candy collectors and historians with his discoveries appearing in countless blogs, magazines, newspaper articles, and books. Always happy to share his knowledge and unique perspectives on this colorful part of our popular culture, Jason has consulted with New York’s Museum of Food and Drink and has also been a featured guest on Food Network’s Heavyweights, France’s M6 Capital, and New York’s TheActionRoom.com. My Google Profile+
View all posts by Jason Liebig →
This entry was posted in 1970's and tagged 1970's, 70's, candy collecting, candy collection, candy collector, candy wrapper collector, collectible, collecting candy, confectionery, confections, packaging, sweets, wrapper. Bookmark the permalink.