The Original 1970’s Wonka Bar – Unveiled for the First Time! 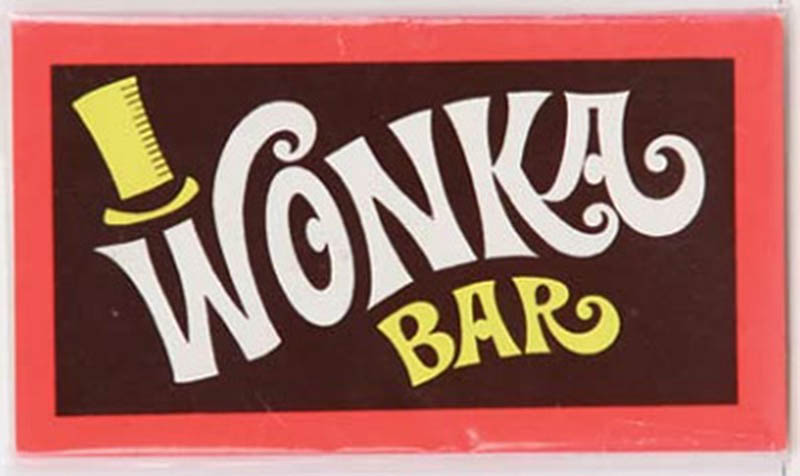 In the original 1971 film, Willy Wonka and the Chocolate Factory, the Wonka Bar was one of the major bars that the kids around the world bought, hunting for a Golden Ticket.  But when the real-world Wonka brand launched in early 1972, it launched with the Super Skrunch and Peanut Butter Oompas – there was no namesake Wonka Bar included.  At least not at first.

Right around 1975 or 1976 however, Concorde Confections launched a lineup of four-flavors of simply-named Wonka Bars.  I’ve been looking for a wrapper for one of these for years.

The Wonka Bars of the mid-1970’s were a taffy type of confection, and they’re ones I remember enjoying, too.  Based on what I’ve been able to research though, I don’t think they were around all that long.

In my years of collecting and talking with other folks about 1970’s Wonka, there aren’t that many people that even remember these.  As for turning up wrappers from them, I’d never been able to find an image of one, let alone an actual example, until earlier this year.  Finally, from out of the L.M. Kallok Confectionery Collection came not one, but four examples of 1970’s Wonka Bar wrappers – one representing each flavor released.

Removing a wrapper from a taffy bar is notoriously difficult, and the examples from the Kallok Collection reflect this – none of them are entirely intact.  Two of them are cut down to just the front sections.  And here they are:

Easily one of the most striking wrappers to come out of the 1970’s candy decade, the Wonka Bar features a logo with a bit of a neon/disco look to it.  To my eye, the whole thing really pops.   I think it’s awesome.

Using the scans of the partial wrappers I have, I wanted to create a composite of a completely intact 1970’s Wonka Bar wrapper – so I did:

I seem to recall that, as a kid, my favorite was the vanilla flavor of these, but it’s a distant memory.  Even so, seeing them now after so many years is incredibly satisfying, and takes me back.

These probably lasted two or three years at most, and certainly didn’t make it past the late-1970’s.  By 1980, these would be gone, and the world would be without a proper Wonka Bar once again.

After today, the original Wonka Bar with its striking wrapper and assorted flavors, need not be forgotten any longer.

If anyone has fond memories of this one, please leave a comment.

A New York City based writer, editor and sometimes actor. After spending much of the 1990′s in the comic book business helping tell the stories of Marvel Comics’ X-Men as series editor, he has since split his time between developing his own entertainment properties while still consulting and working on others. Having been described as “the Indiana Jones of lost and forgotten candy”, Jason is one of the country’s premier candy collectors and historians with his discoveries appearing in countless blogs, magazines, newspaper articles, and books. Always happy to share his knowledge and unique perspectives on this colorful part of our popular culture, Jason has consulted with New York’s Museum of Food and Drink and has also been a featured guest on Food Network’s Heavyweights, France’s M6 Capital, and New York’s TheActionRoom.com. My Google Profile+
View all posts by Jason Liebig →
This entry was posted in 1970's and tagged 1970's, 70's, candy, collectible, collecting, collection, collector, confectionery, design, logo, mascot, packaging, retro, sweets, taffy, vintage, Willy Wonka, Wonka, wrapper. Bookmark the permalink.

16 Responses to The Original 1970’s Wonka Bar – Unveiled for the First Time!