The Famous Clark Bars of the 70’s (that you might not remember.) 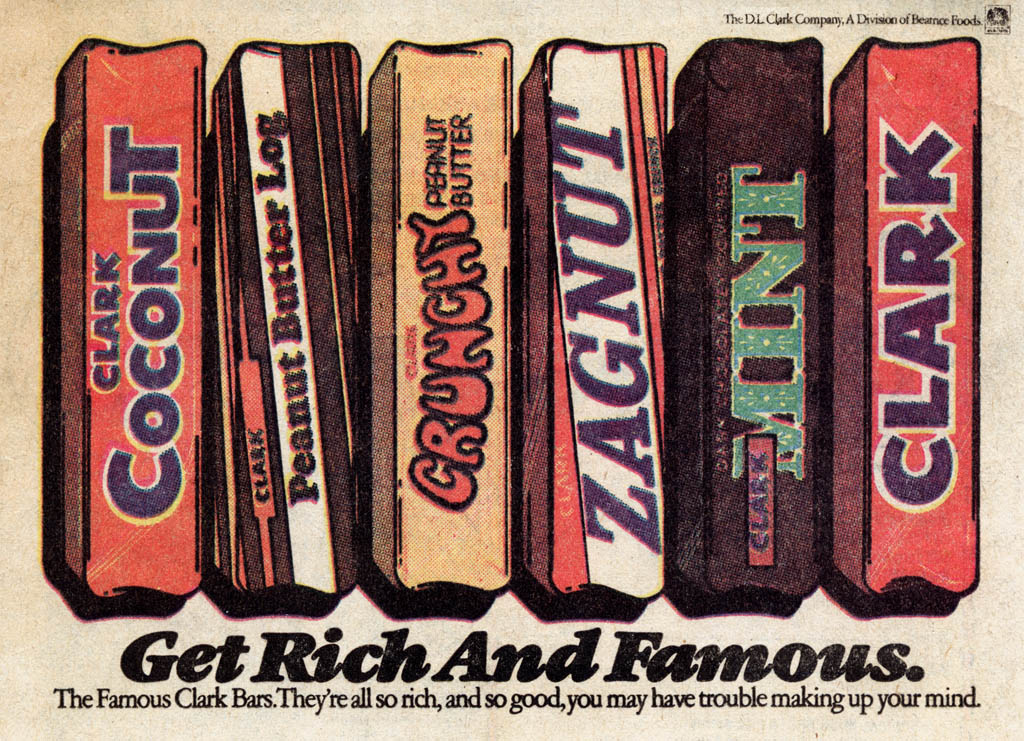 The Clark bar and Clark’s Zagnut have been around for decades.  During the late 1970’s, the D.L. Clark company rolled out a few bars in wonderfully-designed wrappers, along with an ad campaign to support them.

Since first seeing images of these wrappers, I’d been hunting for them, and it turns out they were not easy to find.  Because of that, I assume they did not last as long as the Clark company had hoped.  In spite of this, they remain a cool piece of Clark’s confectionery past, and today I’ll share the wrappers that came out of this creative burst.

One that isn’t featured in the above comic book ad, but is a actually a favorite of mine from the period, is the Clark Light bar wrapper.  I’m a big fan of this one: 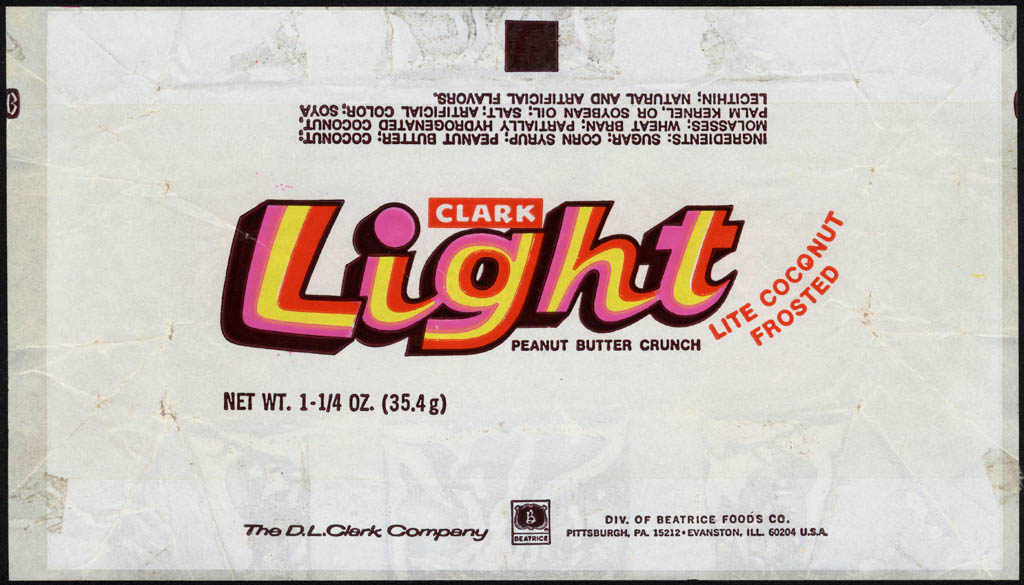 It’s easy to appreciate this era of brand extensions from Clark. 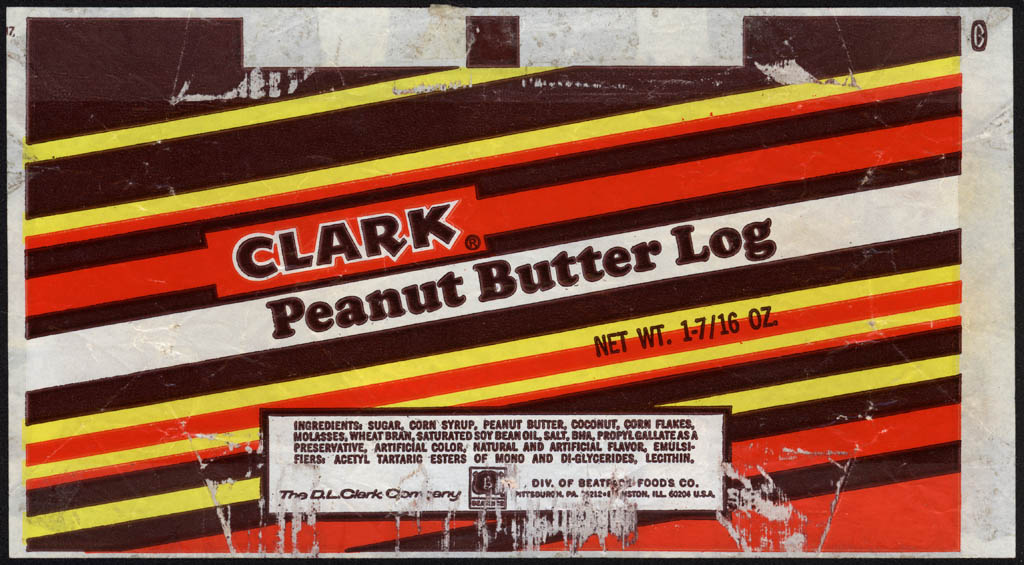 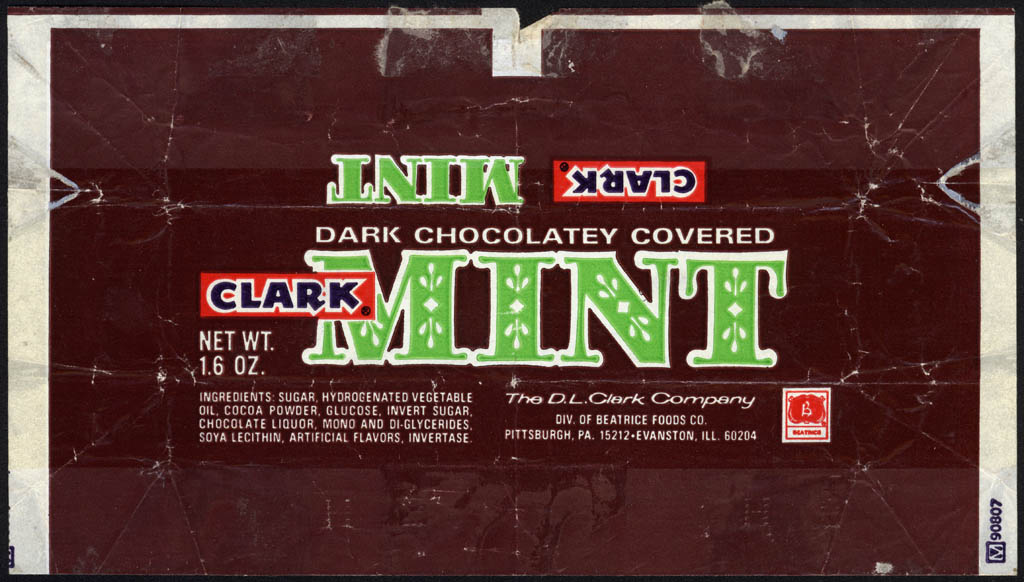 This last version was a bit of a Clark company classic, the Clark Coconut.  While the other wrappers in this group had a variety of designs that deviated from the standard Clark look, for the Clark Coconut they kept it pretty close to the original: 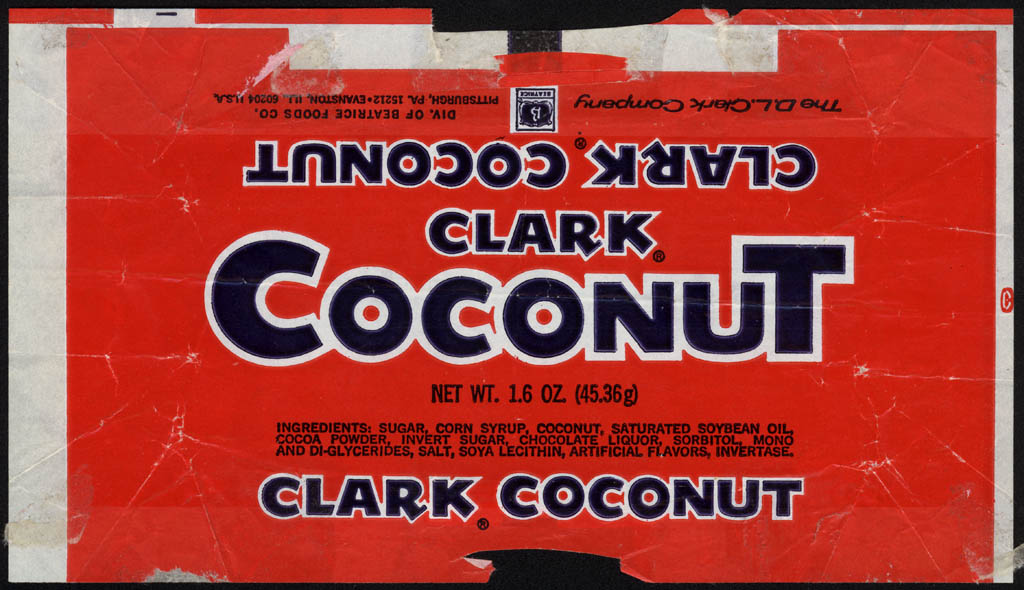 One of my favorite vintage Clark wrappers is actually an earlier version of the Clark Coconut, and it’s a beauty.  A foil wrapper, I did my best to capture the look of this one, but a scan only conveys so much with a foil wrapper: 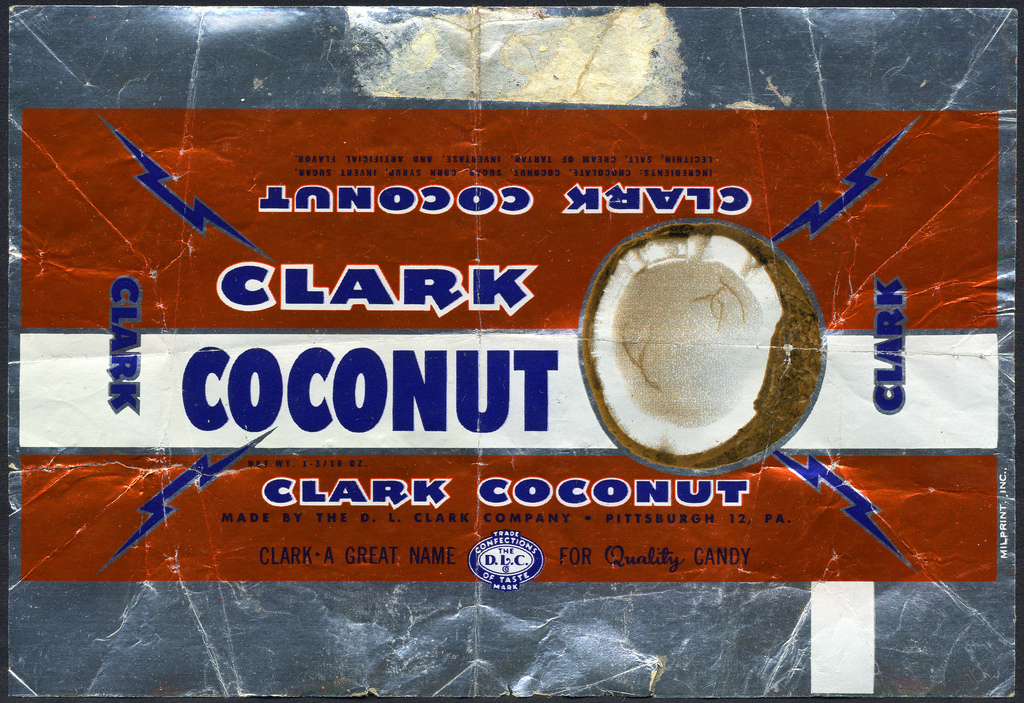 That’s the range of the exotic selection of Clark’s Famous Clark bars of the late 1970’s.  I’ve got one more I wanted to include, as it comes from this same period.  This is Clark’s effort to celebrate America’s Bicentennial, the 1776 bar (a renamed and repackaged Clark Peanut Butter Log): 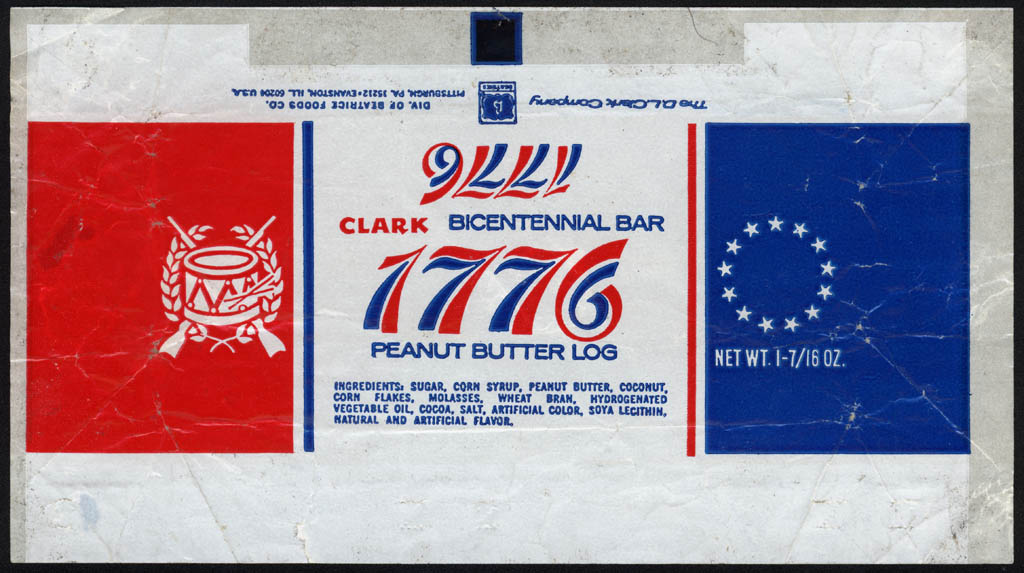 And that’s all the wrappers I have for you today.  You’ll note that I didn’t include a Zagnut wrapper, as those wrappers were featured in a Zagnut-centric piece previously.  The Clark bar wrapper is a standard, and will be featured in an upcoming in-depth piece on its long history.

[Edit:  CollectingCandy.com reader, artist-extraordinaire, and old pal of mine, Glen Mullaly, has identified the month that the Clark ad ran in Marvel’s comics – December 1977.  Thanks, Glen!  So the question I ask below has been answered.]

Before I sign off today, I’m going to ask for a bit of help.  I’m trying to more precisely date the comic book ad featured at the top of today’s piece.  If any comic book collectors out there can help me, check out the following images, which show a little more of this vintage Clark advertisement. The first is the back of the title piece for today, and is a cut-out.  The back shows us a classic Sea Monkey ad. 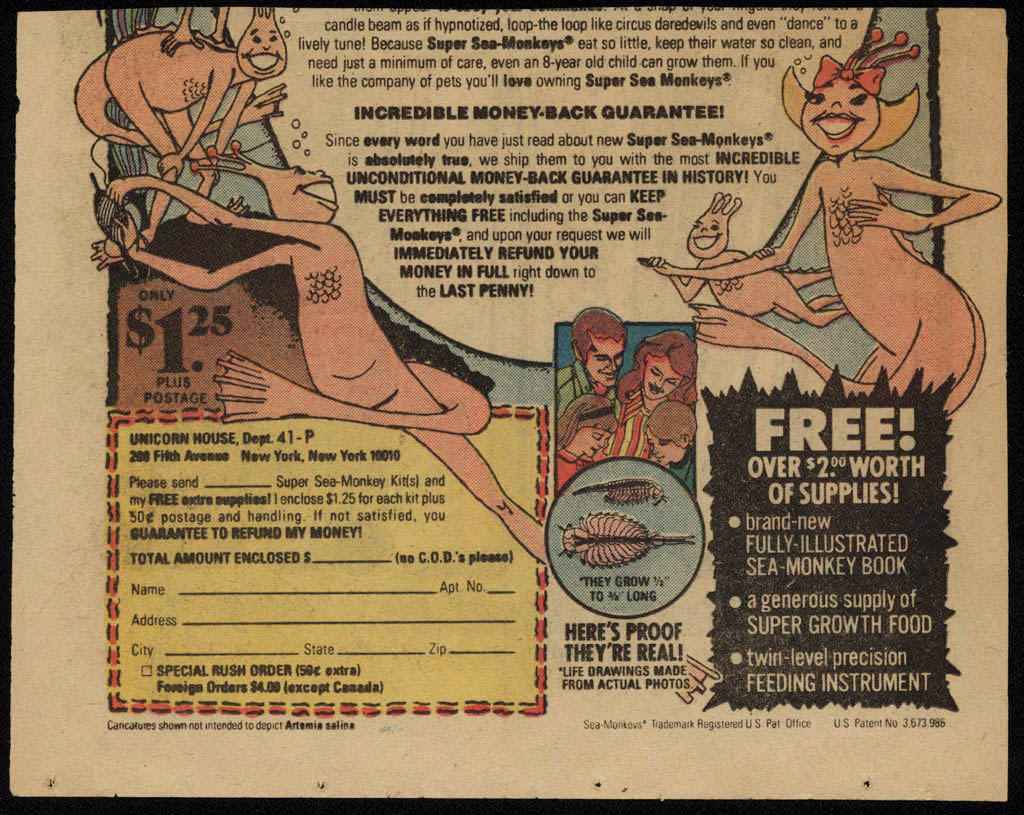 And here’s a full-page front-and-back.  This one looks to be from a Tarzan comic book, which narrows it down.  So if anyone has a run of 1970’s Tarzan comics (Marvel published, I believe) and wouldn’t mind checking them out and letting me know what month and year this came out – I would appreciate it: 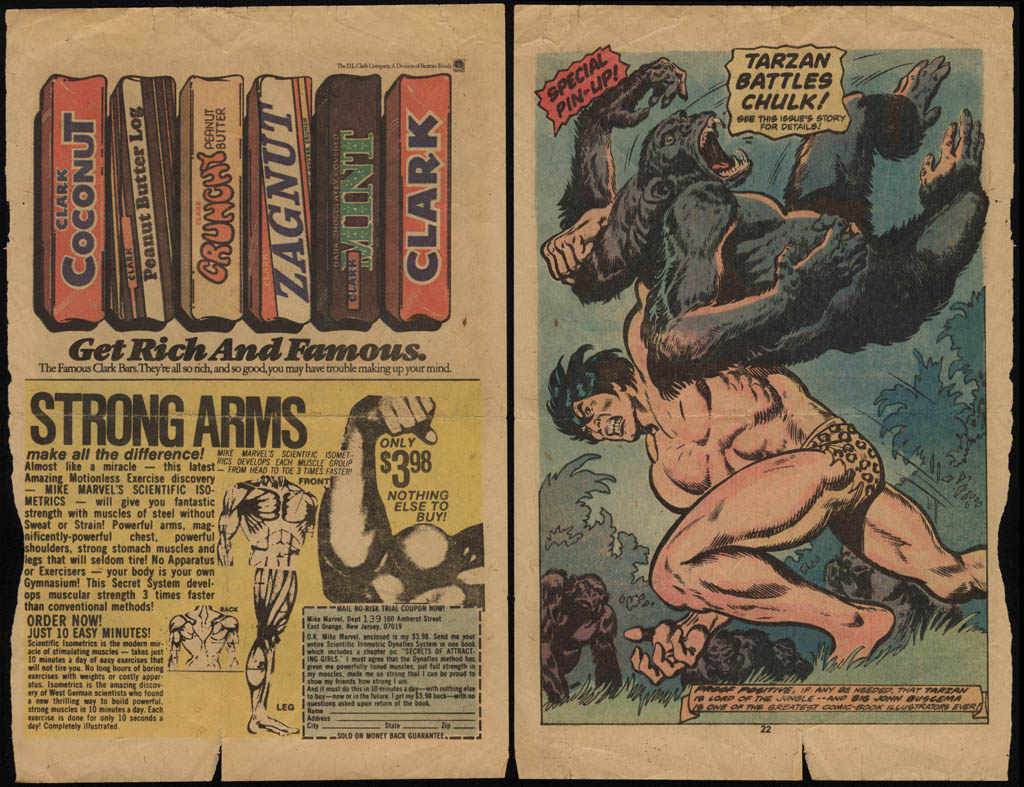 Thanks for checking out today’s article, and if you can help date the Clark ad, leave your confirmation in the comments.

A New York City based writer, editor and sometimes actor. After spending much of the 1990′s in the comic book business helping tell the stories of Marvel Comics’ X-Men as series editor, he has since split his time between developing his own entertainment properties while still consulting and working on others. Having been described as “the Indiana Jones of lost and forgotten candy”, Jason is one of the country’s premier candy collectors and historians with his discoveries appearing in countless blogs, magazines, newspaper articles, and books. Always happy to share his knowledge and unique perspectives on this colorful part of our popular culture, Jason has consulted with New York’s Museum of Food and Drink and has also been a featured guest on Food Network’s Heavyweights, France’s M6 Capital, and New York’s TheActionRoom.com. My Google Profile+
View all posts by Jason Liebig →
This entry was posted in 1970's, Chocolate and tagged 1970's, 70's, advertisement, Beatrice, candy, chocolate, Clark, collectible, collecting, collection, collector, comic book, confection, confectionery, packaging, sweets, vintage, wrapper. Bookmark the permalink.

7 Responses to The Famous Clark Bars of the 70’s (that you might not remember.)