I’ve been a bit out of commission since late last week due to an accidental eye injury, and I’m slowly getting caught up on the many things I wasn’t able to do while patched-up with only one good eye.  I’m still a bit blurry in the injured eye, but I’m healing.  In other words, I’m back and ready to talk candy.

In order to give myself a leg-up on getting up to speed here on the site, I decided to pull something especially fun from my archives that sort of speaks for itself.  The item I chose also happens to speak quite a lot about me personally.

I played AD&D (Advanced Dungeons and Dragons, for you civilians) a LOT back in the 1980’s.   I guess you could call me an “old-school” RPG player, as I was a 1st Edition AD&D guy… I eventually learned and played 2nd edition, but I never really warmed to AD&D 3rd Edition rules.   Yeah, I’ve got some nerd-cred.  I could go on, but rather than bore the non-role-players reading, I’ll get to the subject of today’s short post:  Dungeons and Dragons Candy!  Yes, it really existed:

Produced by Amurol (makers of Big League Chew and Bubble Tape, among other great things) back in the heyday of D&D, it would appear that this was a candy that arrived in the shape of “fantasy figures”.

I don’t actually remember Dungeons and Dragons Candy, and if I ever saw them on shelves in 1983, I probably didn’t think much of them.  Now, however, I can appreciate them for the era that produced them, so I think they’re insanely-fantastic.  I hope you think so, too.

Late addition – here’s an image of a full display box of Dungeons and Dragons candy, from my pal Dan Goodsell: 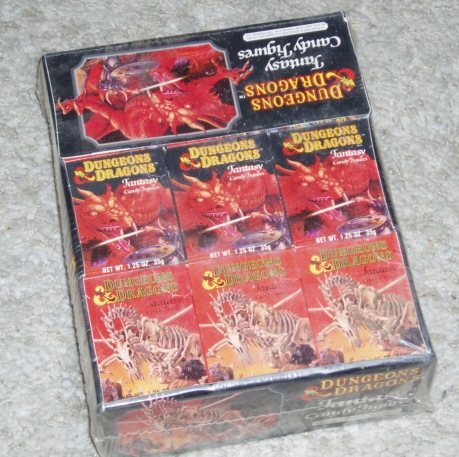 Tomorrow I’ll have a new edition of Wacky Wednesdays to share, and I’ve got a nice series of posts being prepared in my run up to CollectingCandy.com’s 100th post, coming soon!

A New York City based writer, editor and sometimes actor. After spending much of the 1990′s in the comic book business helping tell the stories of Marvel Comics’ X-Men as series editor, he has since split his time between developing his own entertainment properties while still consulting and working on others. Having been described as “the Indiana Jones of lost and forgotten candy”, Jason is one of the country’s premier candy collectors and historians with his discoveries appearing in countless blogs, magazines, newspaper articles, and books. Always happy to share his knowledge and unique perspectives on this colorful part of our popular culture, Jason has consulted with New York’s Museum of Food and Drink and has also been a featured guest on Food Network’s Heavyweights, France’s M6 Capital, and New York’s TheActionRoom.com. My Google Profile+
View all posts by Jason Liebig →
This entry was posted in 1980's, Hard Candy, Uncategorized and tagged 1980's, 80's, AD&D, candy, collectible, confection, D&D, Dragons, Dungeons, Dungeons and Dragons, fantasy, packaging, retro, role playing, RPG, sweets, TSR, vintage. Bookmark the permalink.