PB Max was a delicious treat first put out by the M&M/Mars company in 1989.  I loved the candy itself, but it also had a striking wrapper design, and as a collector I’ve coveted adding one to my collection for some time, and this week, I did.

I finally tracked down a PB Max wrapper (an unused proof version of one, actually) from its 1989 introduction.  And boy is it a pretty one. 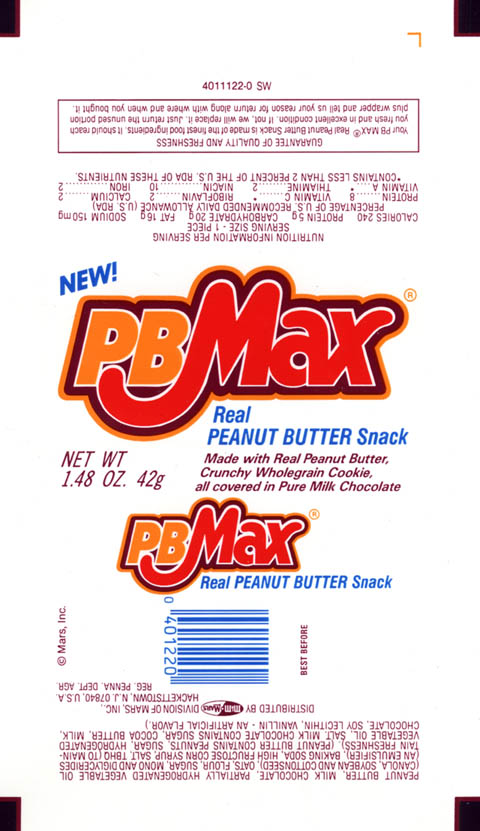 M&M/Mars have issued some of my favorite candy bar wrappers over the years with striking, bold designs.  I put the PB Max wrapper design right up there with that of my all-time favorite, the Marathon bar.  It’s another discontinued classic.

That’s all for PB Max – just a short post today.

Before I go, I would like to point to two other great bits of reminiscence of PB Max – via two friends of CollectingCandy.com:

Gone But Not Forgotten Groceries:  http://gbnfgroceries.blogspot.com/2011/09/from-candy-aisle-pb-max.html

I’ll round out with a YouTube video of the original PB Max TV commercial:

A New York City based writer, editor and sometimes actor. After spending much of the 1990′s in the comic book business helping tell the stories of Marvel Comics’ X-Men as series editor, he has since split his time between developing his own entertainment properties while still consulting and working on others. Having been described as “the Indiana Jones of lost and forgotten candy”, Jason is one of the country’s premier candy collectors and historians with his discoveries appearing in countless blogs, magazines, newspaper articles, and books. Always happy to share his knowledge and unique perspectives on this colorful part of our popular culture, Jason has consulted with New York’s Museum of Food and Drink and has also been a featured guest on Food Network’s Heavyweights, France’s M6 Capital, and New York’s TheActionRoom.com. My Google Profile+
View all posts by Jason Liebig →
This entry was posted in 1980's, 1990's, Chocolate, Uncategorized and tagged 1980's, 1990's, 80's, 90's, candy, chocolate, collectible, collecting, collection, collector, confection, design, logo, M&M/Mars, Mars, packaging, peanut butter, retro, sweets, vintage, wrapper. Bookmark the permalink.

1 Response to PB Max! – Quite a striking candy wrapper.