All About Razzles – First it’s a candy, then it’s a gum!

What can you say about Razzles?  As it turns out, quite a lot.

I don’t recall what my earliest memory of Razzles was, only that they seemed to be ever present in the tapestry of my confectionery youth.

My most vivid memory of Razzles comes not from my childhood, but from my years as an editor for Marvel Comics, when I worked on their X-Men comic books.   It was the late 1990’s, and Marvel had purchased the Fleer company some years before this, Fleer being the manufacturer of Razzles gum.  Due to this, the President’s seceratary always had a closet fully stocked with Fleer candy and gum.  Once I figured this out, I availed myself of the candy-closet (and the kindness of the woman who guarded it) whenever I could. My go-to treat?  Razzles.

As I’ve stated here on CollectingCandy.com, candy history, especially the Wikipedia version of it, is often filled with incorrect data.  It’s not surprising, due to the lack of solid info out there.  Looking at the current entry for Razzles, it shows them being introduced in 1966, but based on the only early packaging piece I’ve encountered, this seems wrong.  More likely, it would appear that Razzles were introduced in 1968:

This early Razzles package still sports “New!” on the pack, and was on shelves in the late 1968-1969 period.  So 1968 would be a more likely year to point to as the introductory year for Razzles.

Though it’s not evident these days, Razzles received their name partly due to the fact that, when introduced, they were solely a raspberry-flavored treat.  It would be a few years later before we’d see Razzles offered in assorted flavors.   Based on my research, 1972 would appear to be the first year that fruit-flavored Razzles hit store shelves: 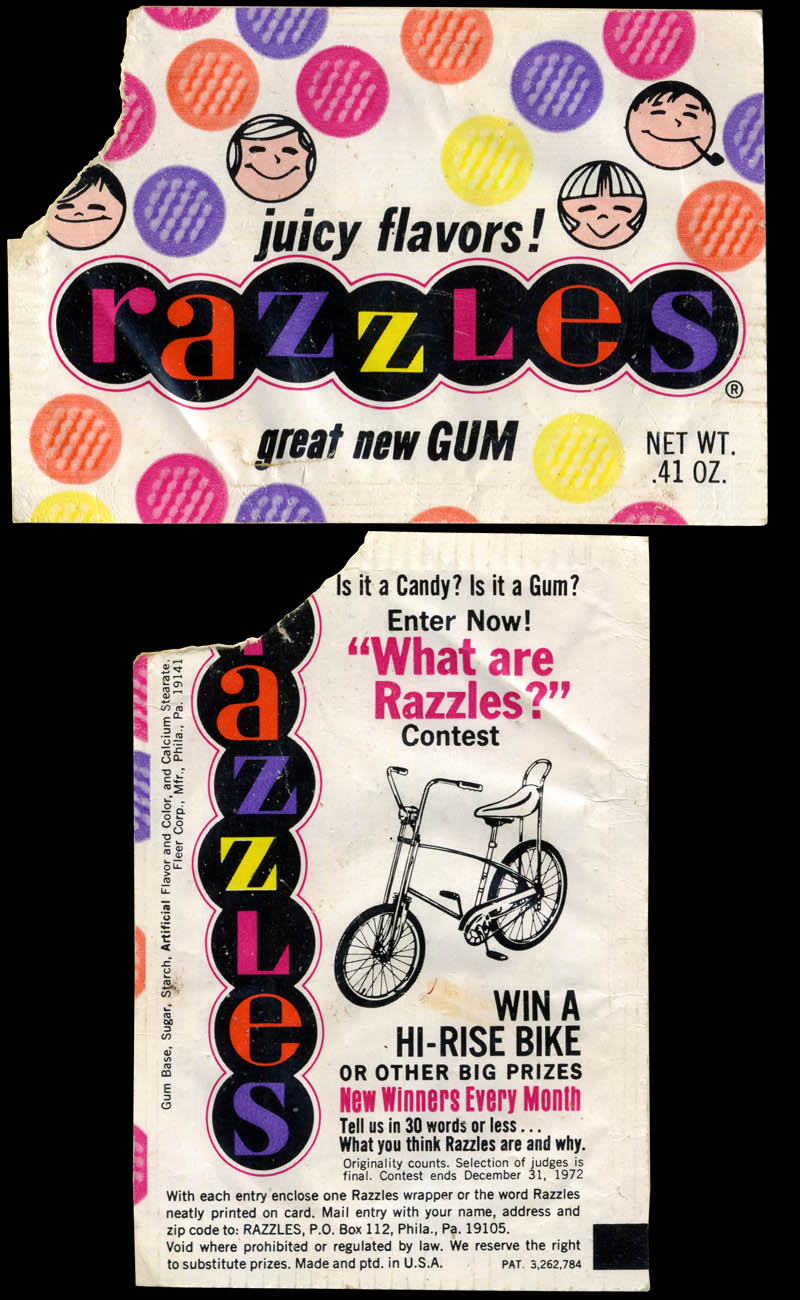 The original package style was still being used as late as 1974: 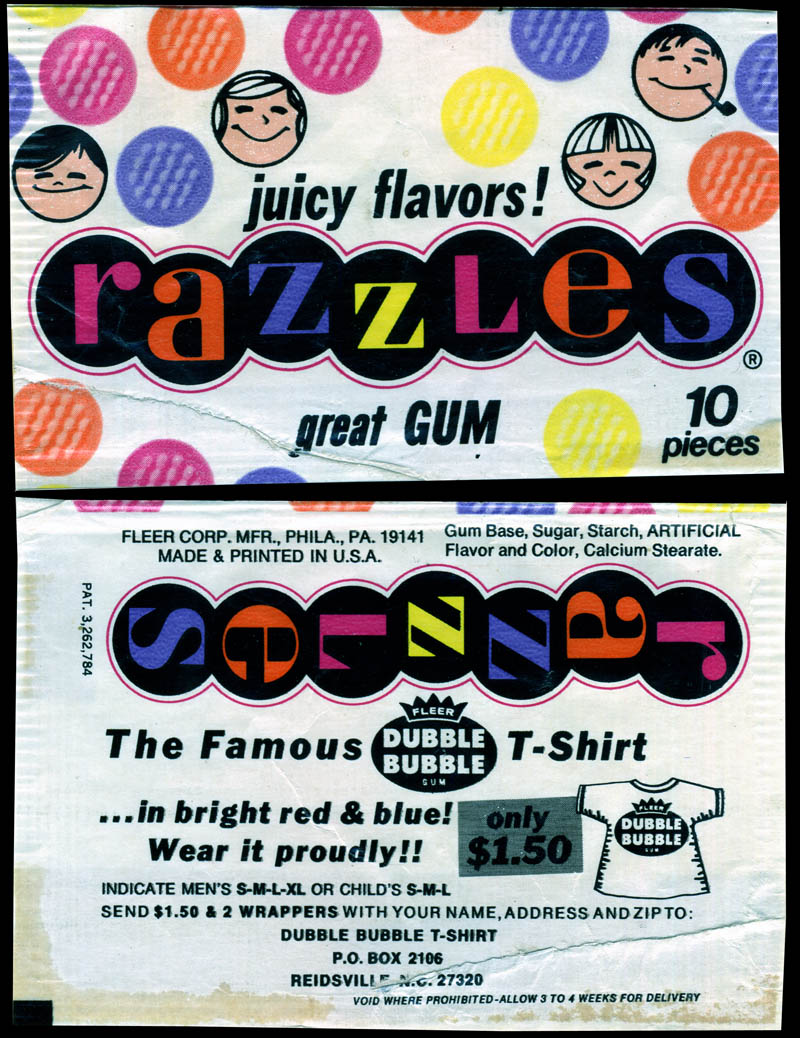 1975 saw the introduction of a new design for Razzles packaging.  Gone were the Razzle-shaped faces of people, now replaced by fruit mascots: 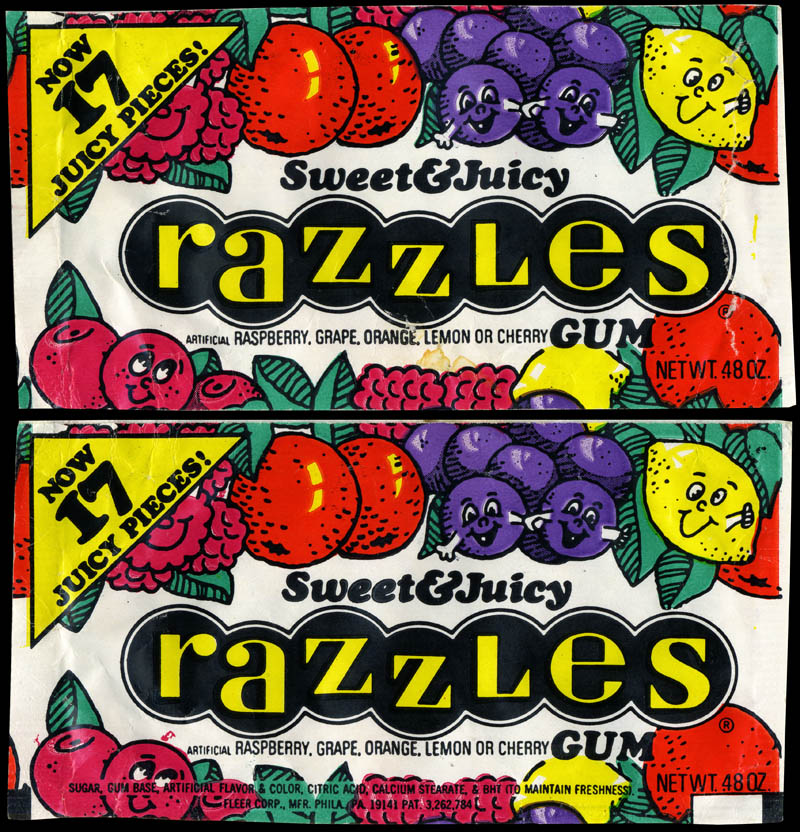 This period also saw the introduction of flavor extensions for the brand, with Sour Razzles: 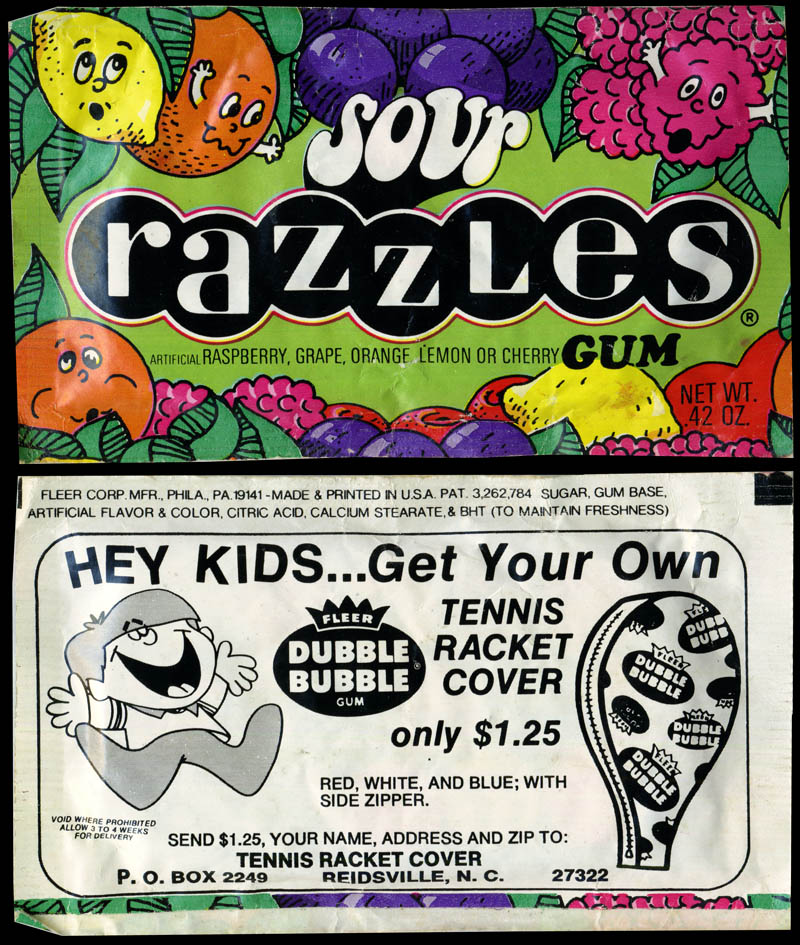 The fruit-mascot Razzles packaging would last a few more years, but by 1980, they would be phased out, in favor the package style seen below: 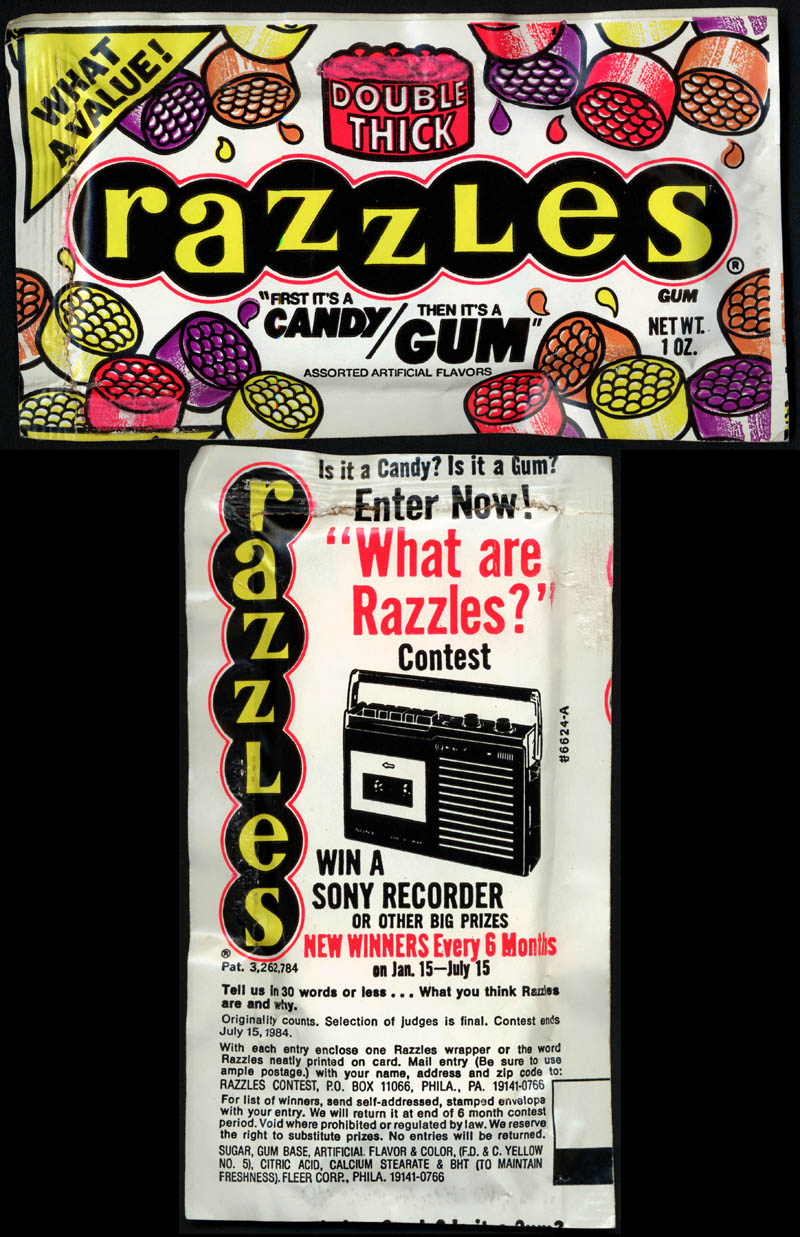 This early 80’s package style is the one I remember most clearly from my own childhood.  Perhaps it’s because it was tied so closely to my days of regular visits to Woolworths, trying to find the latest Empire Strikes Back trading cards.   I have that package still full with the original Razzles in it.  I suspect that they haven’t held up well…

Another great Razzles piece that came from the early 80’s might be my favorite of them all: 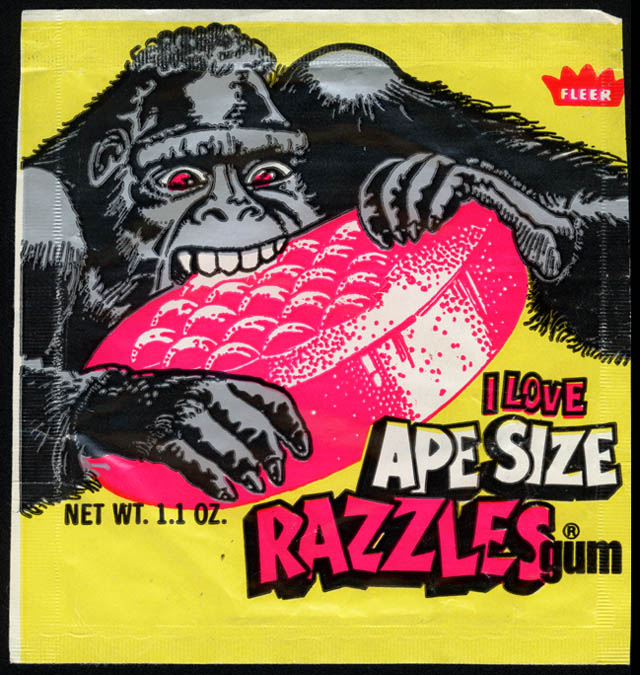 Razzles saw another packaging overhaul in 1984: 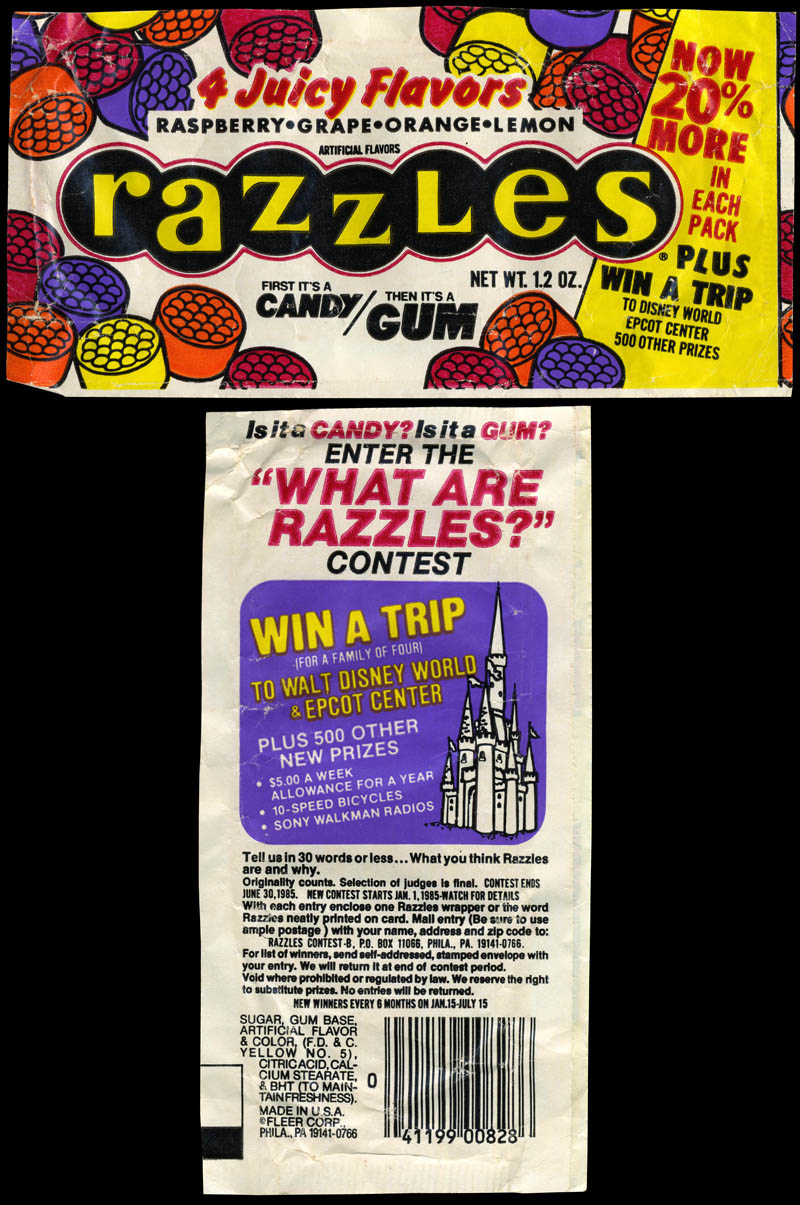 After a number of years without one, 1984 also saw the return of a Razzles flavor-extension – with Tropical Razzles: 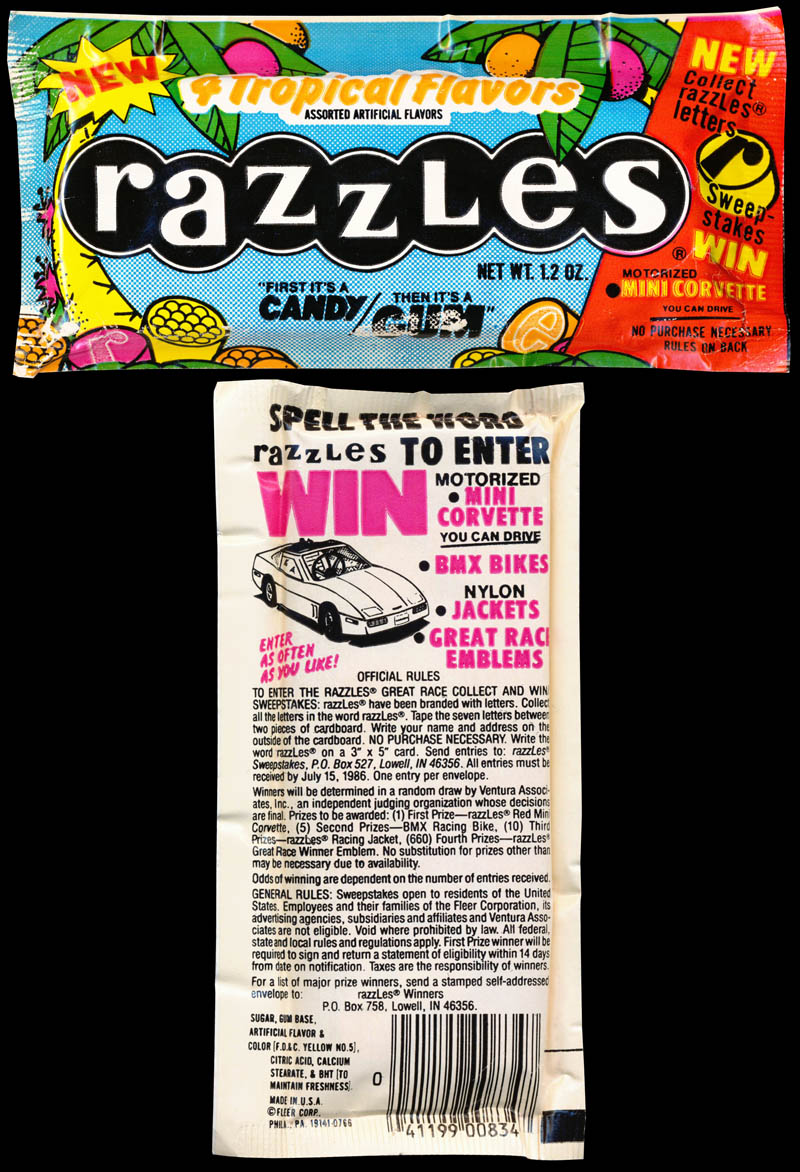 It’s great to see the introduction of Tropical Razzles during this period.  I recently acquired a neat sell-sheet from this period of Razzles: 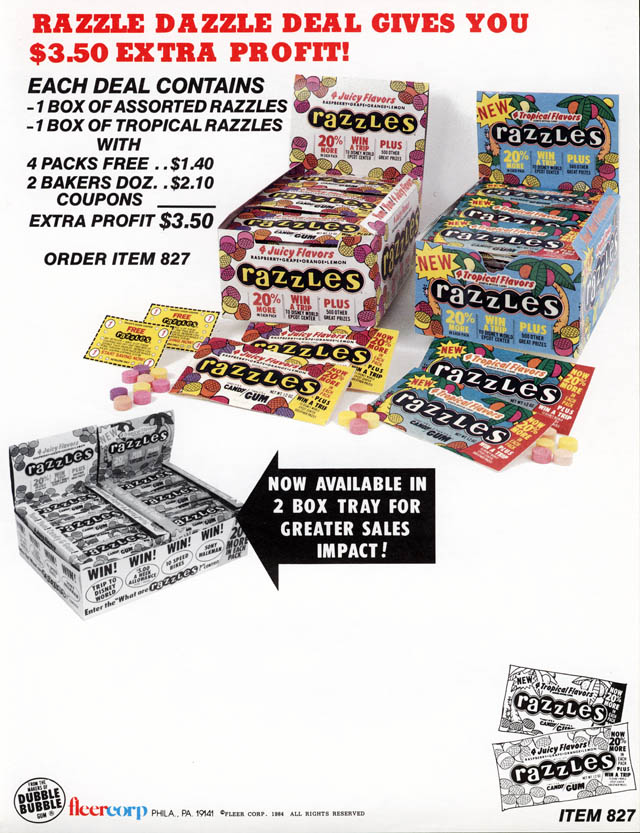 Though not a major redesign, the packages received some tweaks for the “Razzles Letters” promotion in 1986: 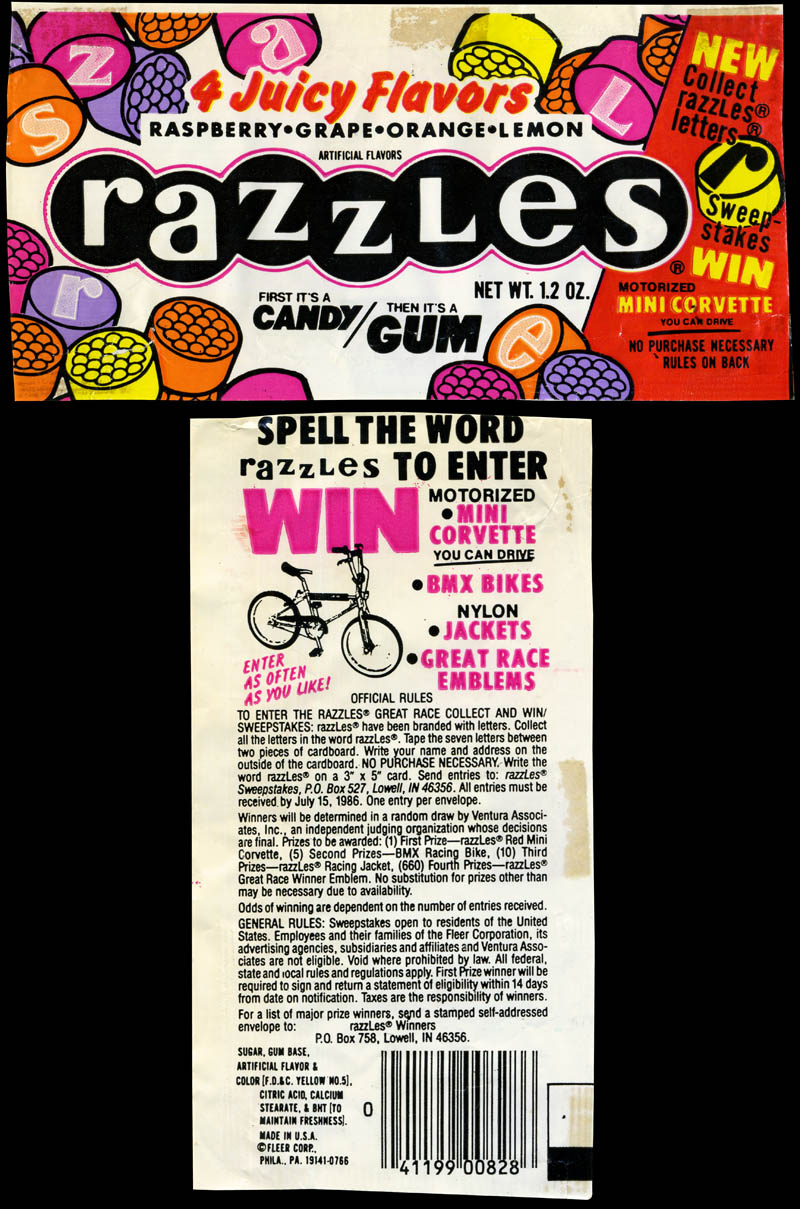 Here’s a small clipping of Razzles “Ticket to Adventure” promotion from the following year: 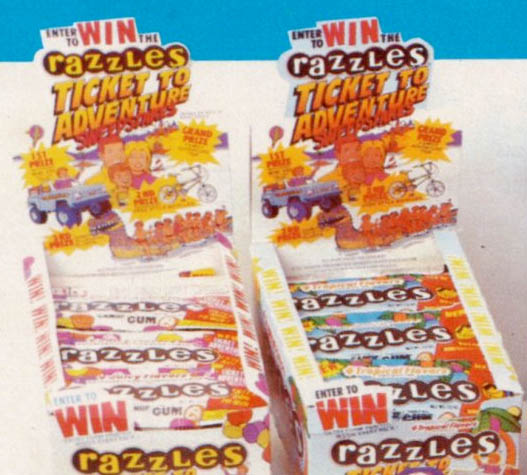 In 1989, Razzles would see their next major packaging redesign.  My eye tells me that this 1989 package shows the first signs of computer design influence:

The 1989 redesign also saw the inclusion of a different flavor extension for the brand.  This time, the standard Razzles were joined by a Tangy Fruit variety, as seen in this clipping from a Fleer price listing: 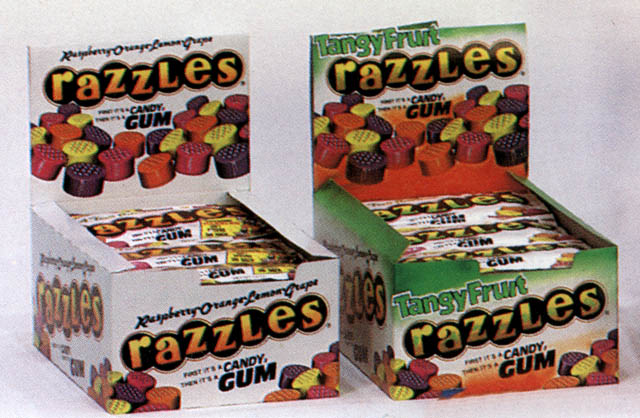 I don’t have a Tangy Fruit Razzles package, but you can be sure that it’s on my want-list.

Moving on into the 1990’s, we reach the period when Marvel had purchased Fleer, and I was enjoying Razzles on a regular basis out of my office desk drawer.  The mid-1990’s saw the most dramatic design change for Razzles, as they would finally lose their distinctive circled-lettering design, which they had for nearly 30-years, replaced with what I would call something more “extreme”: 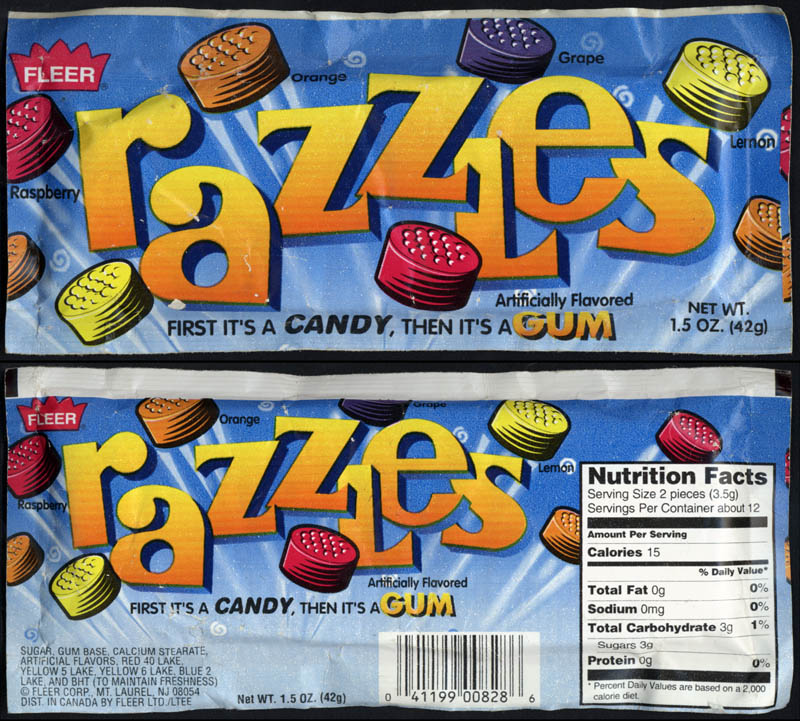 By the year 2000, Fleer had been sold to a Canadian company called Concorde Confections (not to be confused with the USA-based Condord Confections of the early 70’s) – and they handled the manufacture and distribution of Razzles until the brand was taken over by Tootsie.  The package design, likely introduced in the early 2000’s, appears to have remained unchanged, and there are now three flavor-packs of Razzles available, the flavor extensions tie together the ones offered in the 1970’s and the 1980’s: 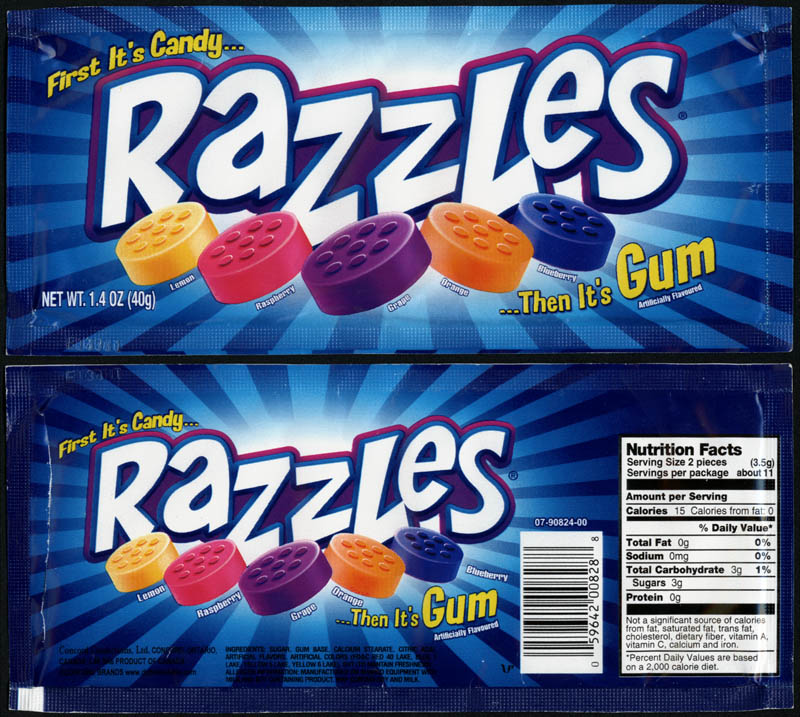 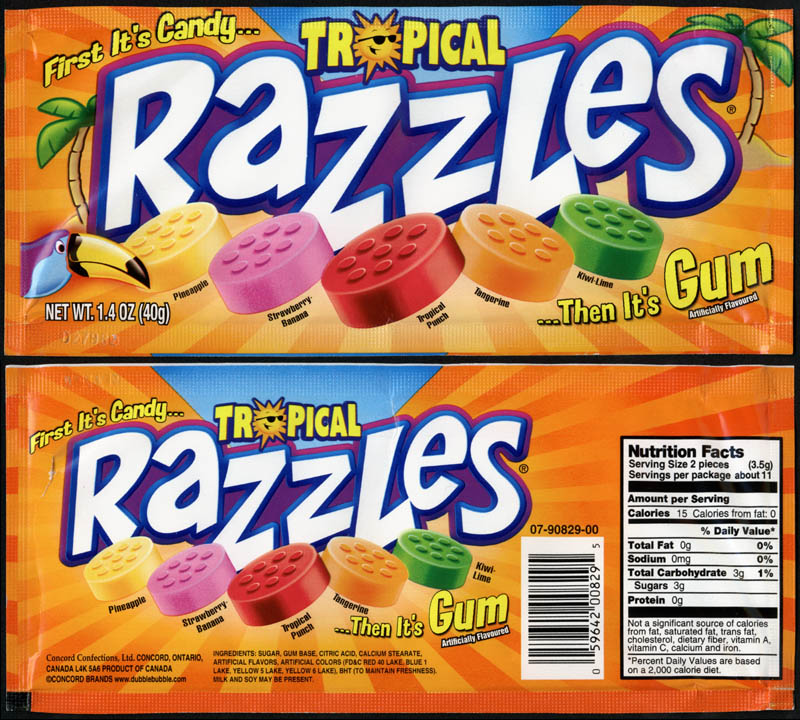 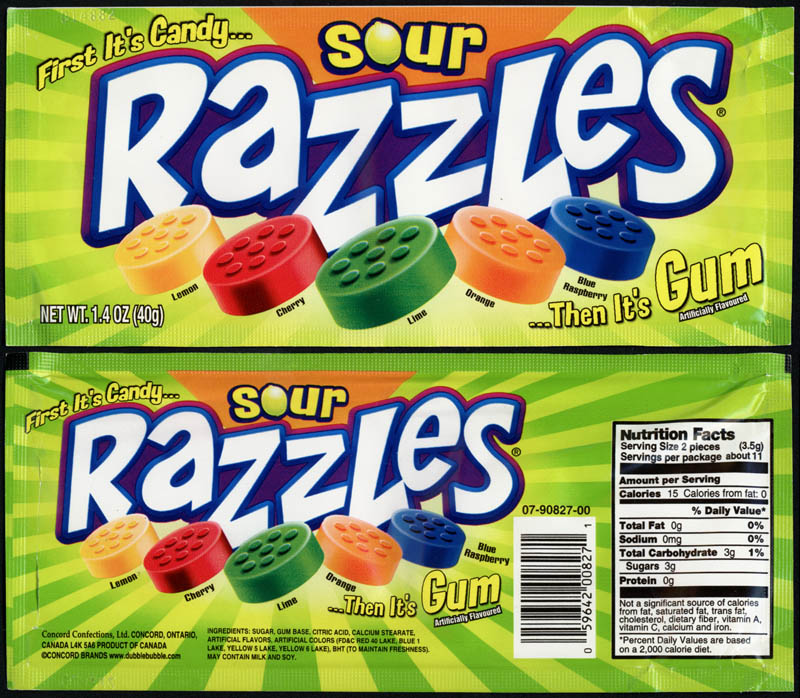 So, nearly 45 years later, Razzles are still around – that’s what I call a timeliness confectionery classic.

I’m going to round out with a visual timeline, collecting the major packaging evolutions of the brand over its four decades.  This is easily the longest timeline I’ve put together.  It makes me think I need more than just a vertical stack, when I’ve got so many package variations to include:

A New York City based writer, editor and sometimes actor. After spending much of the 1990′s in the comic book business helping tell the stories of Marvel Comics’ X-Men as series editor, he has since split his time between developing his own entertainment properties while still consulting and working on others. Having been described as “the Indiana Jones of lost and forgotten candy”, Jason is one of the country’s premier candy collectors and historians with his discoveries appearing in countless blogs, magazines, newspaper articles, and books. Always happy to share his knowledge and unique perspectives on this colorful part of our popular culture, Jason has consulted with New York’s Museum of Food and Drink and has also been a featured guest on Food Network’s Heavyweights, France’s M6 Capital, and New York’s TheActionRoom.com. My Google Profile+
View all posts by Jason Liebig →
This entry was posted in 1960's, 1970's, 1980's, 1990's, Fleer, Gum and tagged 1960's, 1970's, 1980's, 1990's, 2000's, 60's, 70's, 80's, 90's, candy, collectible, collecting, collection, confection, confectionery, Fleer, gum, Marvel, mascot, packaging, retro, sweets, vintage, wrapper. Bookmark the permalink.

10 Responses to All About Razzles – First it’s a candy, then it’s a gum!