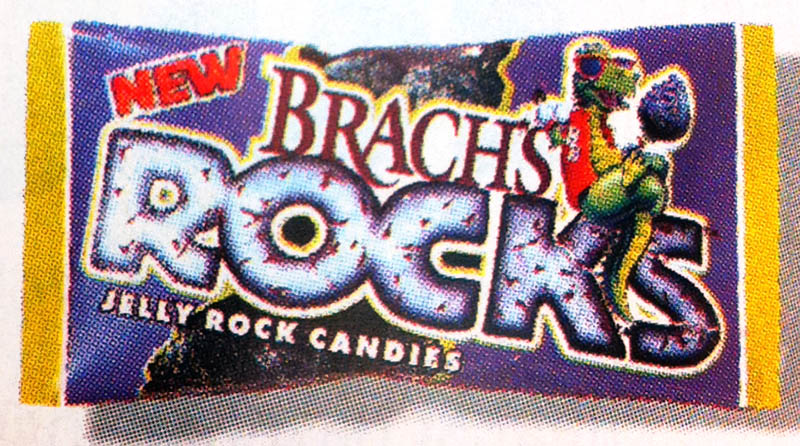 Rock candy has always been a fun concept, though the crystallized-sugar-on-a-string style is not the only kind out there.  I think I first saw jelly bean-like confections designed to look like rocks, all the way back in the 1970’s, during a family vacation.

In 1993, Brach’s introduced a retail version of this genre of candy with Brach’s Rocks, featuring a fun Dinosaur mascot named Rocky D.

I don’t think I ever sampled these during the years they were on sale, so I’ve had to learn about them through photos.  Brach’s Rocks had a great, rocky look to them, and if they were still around, I would definitely want to try them out.  Here’s an image of the candy clipped from a trade ad: 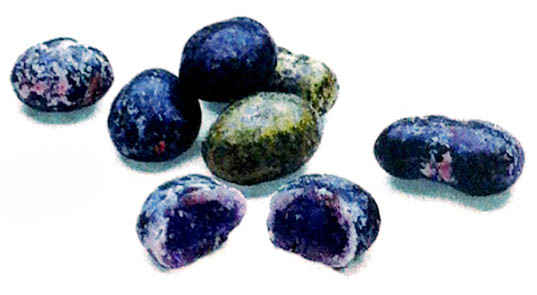 Brach's Rocks - the candy itself

As a kid, how cool would it be to pretend to eat rocks?  Maybe that doesn’t make sense to everyone, but I think it sounds awesome.

Based on what I’ve been able to dig up, it appears that Brach’s Rocks first hit store shelves in late 1992 or early 1993.  They were sold in standard retail plastic packages, as well as larger peg-packages.  Here are a pair of trade ads related to both forms of packaging. 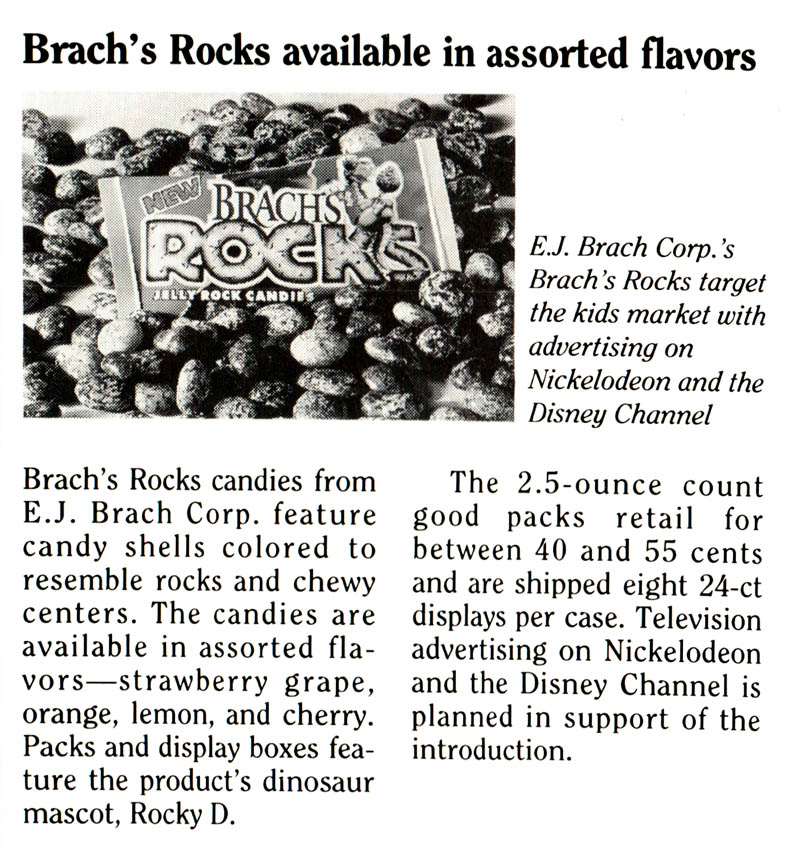 Thanks to my recent acquisition of the L.M. Kallok collection, I have an actual Brach’s Rocks package to share.  It’s the standard version, the kind which you might have found in the checkout aisle of a grocery or convenience store. 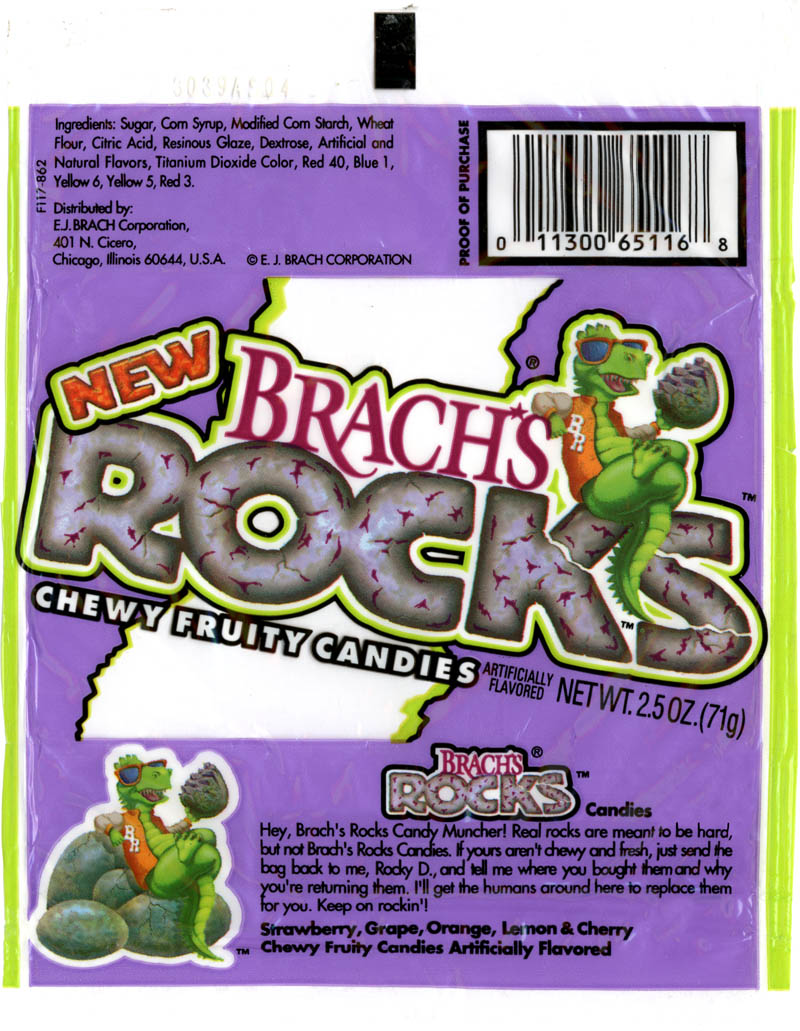 I have to say, I really dig the packaging for Brach’s Rocks – fun colors, groovy logo, and a great mascot – to my eye, it’s got it all.

One final Brach’s Rocks piece I have to show is a full-page trade ad.  I strive to find and share only the best pieces of references, but unfortunately this one isn’t a scan.  This is a photo I took with my phone, while doing candy-related research at my library.   Pouring over old candy trade periodicals a year or two ago, I snapped this photo – thinking it would be handy some day.  The quality may not be that great, but I still wanted to include it. 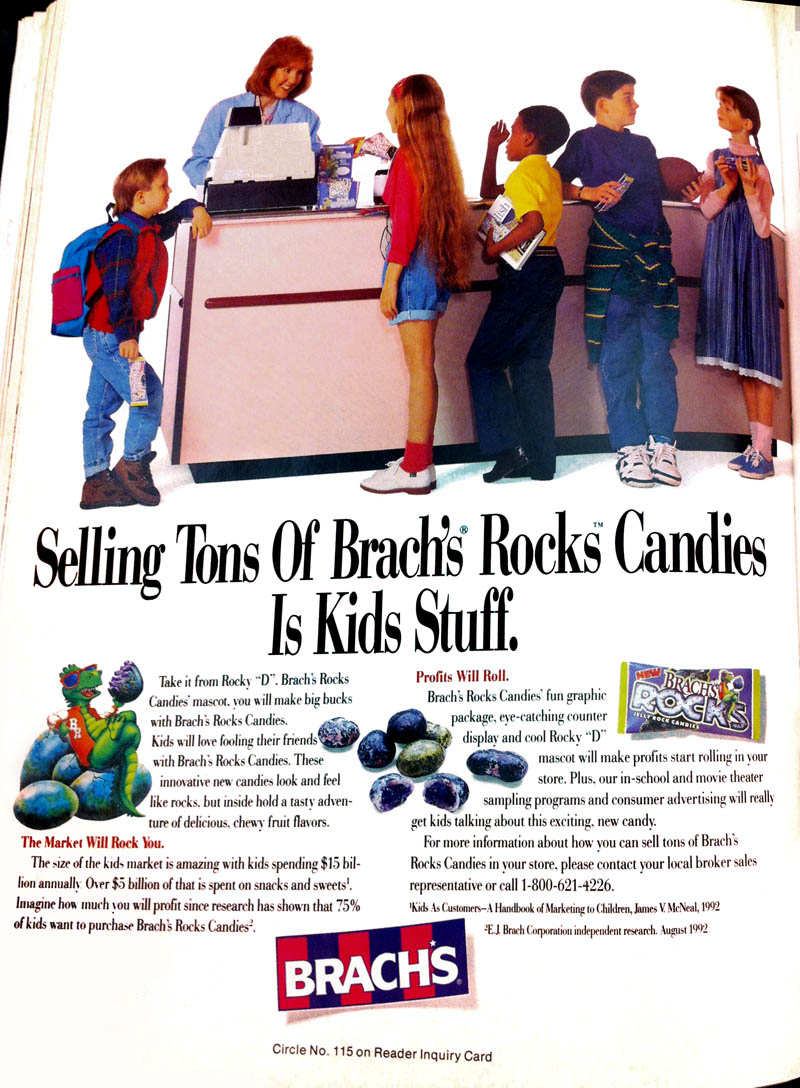 That’s all for the early 90’s treat, Brach’s Rocks.  Hope to see you back here tomorrow for more fun from CollectingCandy.com.

A New York City based writer, editor and sometimes actor. After spending much of the 1990′s in the comic book business helping tell the stories of Marvel Comics’ X-Men as series editor, he has since split his time between developing his own entertainment properties while still consulting and working on others. Having been described as “the Indiana Jones of lost and forgotten candy”, Jason is one of the country’s premier candy collectors and historians with his discoveries appearing in countless blogs, magazines, newspaper articles, and books. Always happy to share his knowledge and unique perspectives on this colorful part of our popular culture, Jason has consulted with New York’s Museum of Food and Drink and has also been a featured guest on Food Network’s Heavyweights, France’s M6 Capital, and New York’s TheActionRoom.com. My Google Profile+
View all posts by Jason Liebig →
This entry was posted in 1990's, Novelty and tagged 1990's, 90's, Brach's, candy, collectible, collecting, collection, collector, confection, dinosaur, grocery, mascot, packaging, retail, retro, rock, rock candy, sweets, vintage, wrapper. Bookmark the permalink.