I don’t recall trying the Nestle Quik bar during its run in the mid-1990’s, but being a fan of the brand in general, I’ve been delighted to learn about its candy bar offshoot, and to pick up a couple of vintage pieces of packaging along the way.  For those that aren’t familiar, the Nestle Quik Bar was a chocolate taffy-like item, and featured a wrapper that was in line with the Nestle Quik cans of the time, Bunny and all.

Introduced in 1993, the Quik Bar was released from Concorde Brands, a division of Sunmark.  Some time after this, the Concorde/Sunmark company would be purchased by Nestle, so this may have been an early indication of what was to come.

I have one other wrapper from the Nestle Quik bar run, this one from 1994.  It’s a piece that was branded specifically for Easter:

I can’t say how long the bar lasted on store shelves, but I do know that Concorde was still actively promoting the brand throughout 1995, so we can guess that these were in stores at least as late as 1996, possibly longer.   Here’s the one trade ad I have devoted to them: 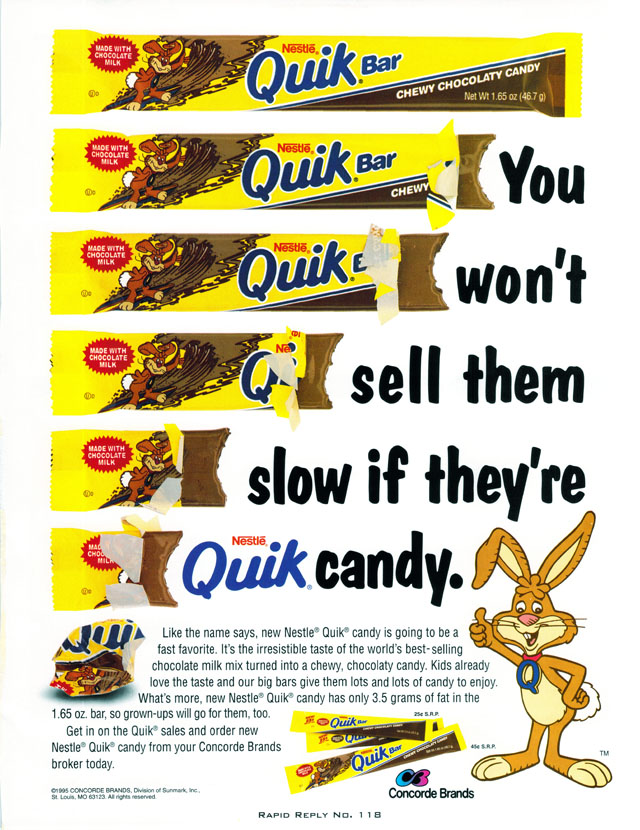 That’s everything I’ve got on Concorde’s Nestle Quik Bar.  I do have one other candy bar piece connected to Nestle Quik.  This one dates back to the 1950’s or maybe the 1960’s.  It’s a fun one and a way-back vintage way to close out this chocolaty post (boy, I really want some chocolate milk now): 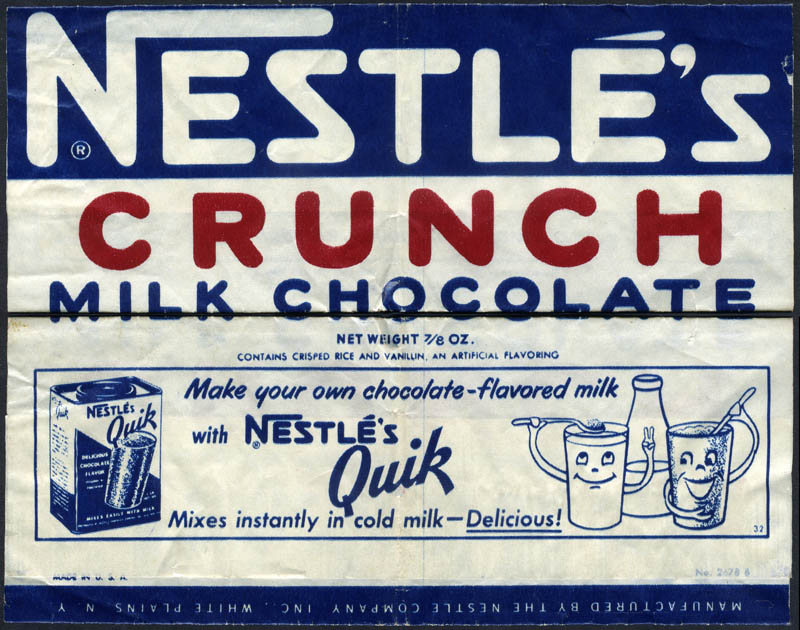 A New York City based writer, editor and sometimes actor. After spending much of the 1990′s in the comic book business helping tell the stories of Marvel Comics’ X-Men as series editor, he has since split his time between developing his own entertainment properties while still consulting and working on others. Having been described as “the Indiana Jones of lost and forgotten candy”, Jason is one of the country’s premier candy collectors and historians with his discoveries appearing in countless blogs, magazines, newspaper articles, and books. Always happy to share his knowledge and unique perspectives on this colorful part of our popular culture, Jason has consulted with New York’s Museum of Food and Drink and has also been a featured guest on Food Network’s Heavyweights, France’s M6 Capital, and New York’s TheActionRoom.com. My Google Profile+
View all posts by Jason Liebig →
This entry was posted in 1990's, Chocolate, Holiday and tagged 1990's, 90's, bunny, candy, chocolate, chocolate milk, Cocorde, collectible, collecting, collector, confection, Easter, mascot, milk, Nestle, nostalgia, old, packaging, retro, sweets, wrapper. Bookmark the permalink.

6 Responses to Nestle Quik in bar form – Drink up some 1990’s chocolaty goodness.