A topic for a Tuesday – Take 5 from Hershey. 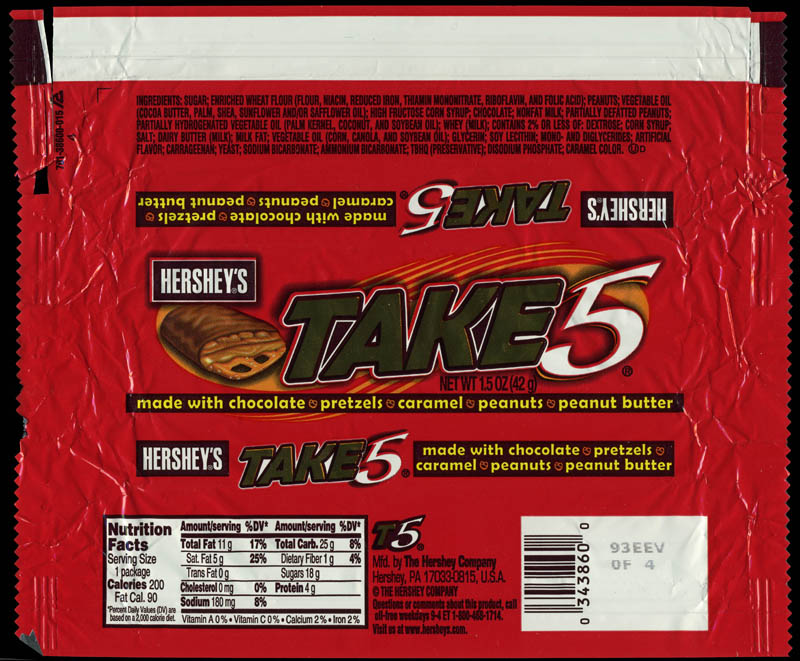 First released in 2005, Hershey’s Take 5 bar was quite a different bar for Hershey.  Incorporating a great mix of ingredients, most notably a pretzel base, it’s been a favorite of mine ever since.

Relatively young in terms of collecting it, the Take 5 has nonetheless provided a number of fun variants to catch over the years.  I’ll be covering all that I know about them today.

During the mid-2000’s, Hershey was cranking out quite a few flavor variations across their brands under the “Limited Edition” header.  Though it was a new bar, Take 5 got the full treatment with four flavors that were only around a short time.   Here they are: 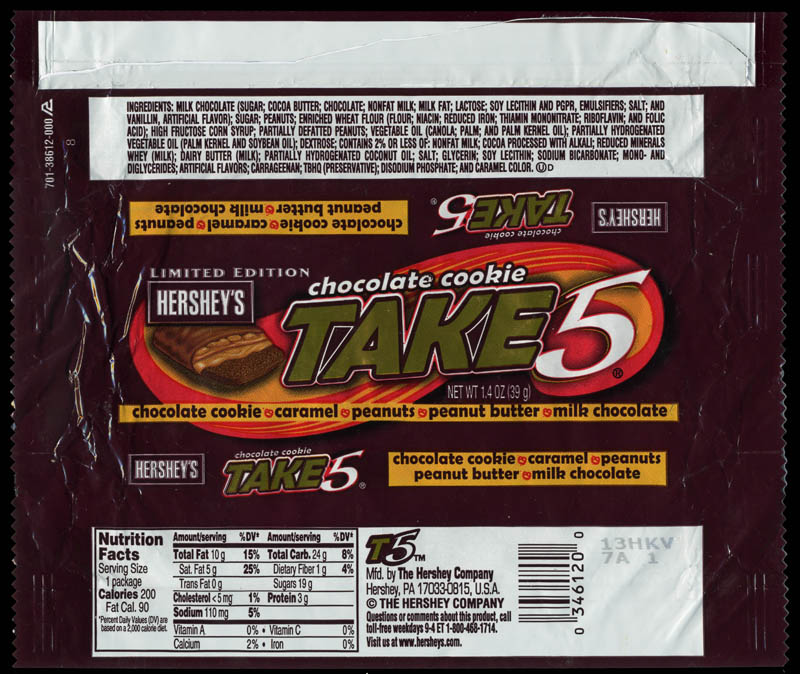 This next wrapper, the Peanut Butter Take 5, does not indicate a limited edition release.  I don’t know if the plan was for this one to be an ongoing release or not, but evidence does point to that as a possibility. 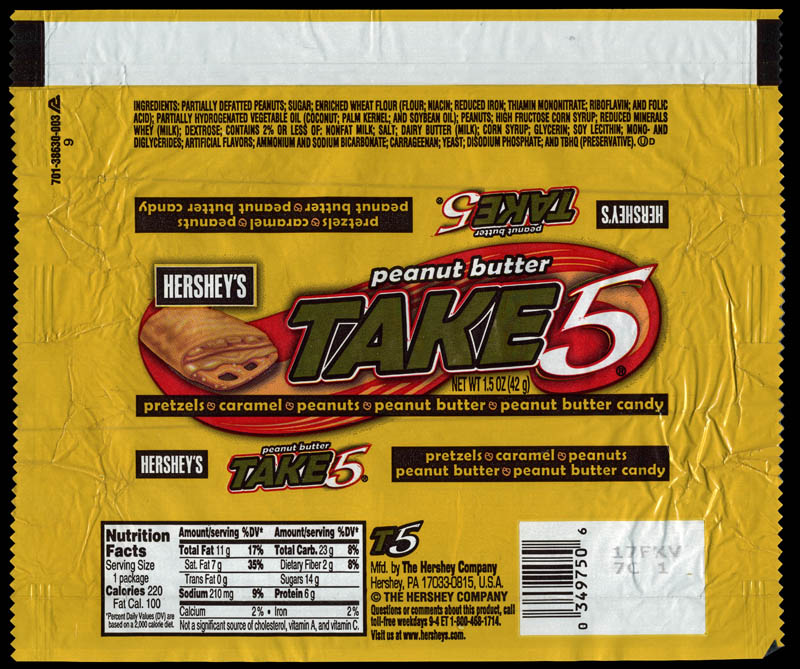 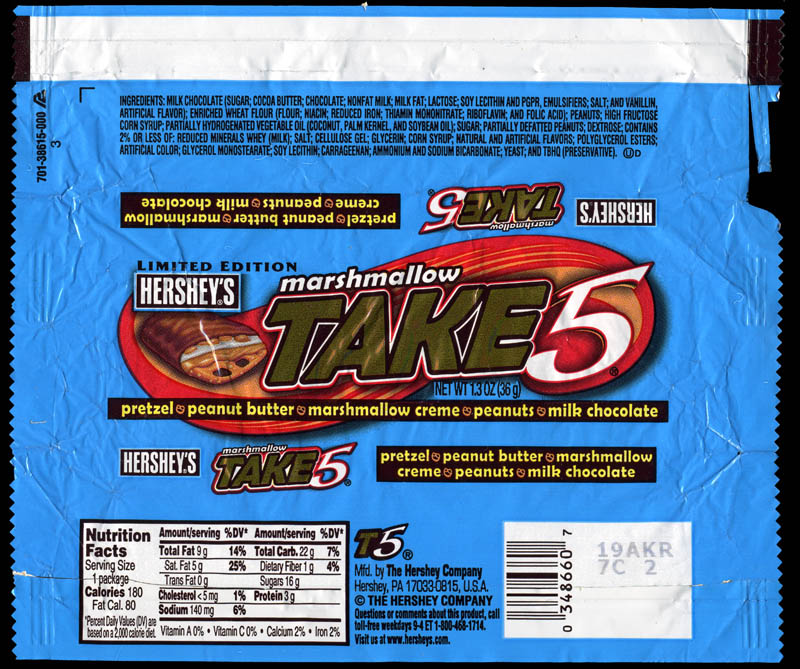 The last of the limited edition Take 5’s is a white chocolate variety.  I don’t have one of this in my personal collection, but fellow collector Brad Kent does, and this image comes from his files, and his site:

That’s all for the limited variants for Take 5.  Next up is a representative from the snack-size category.  Picked up a few bags of these last Spring, and I’ve been sampling from them since. 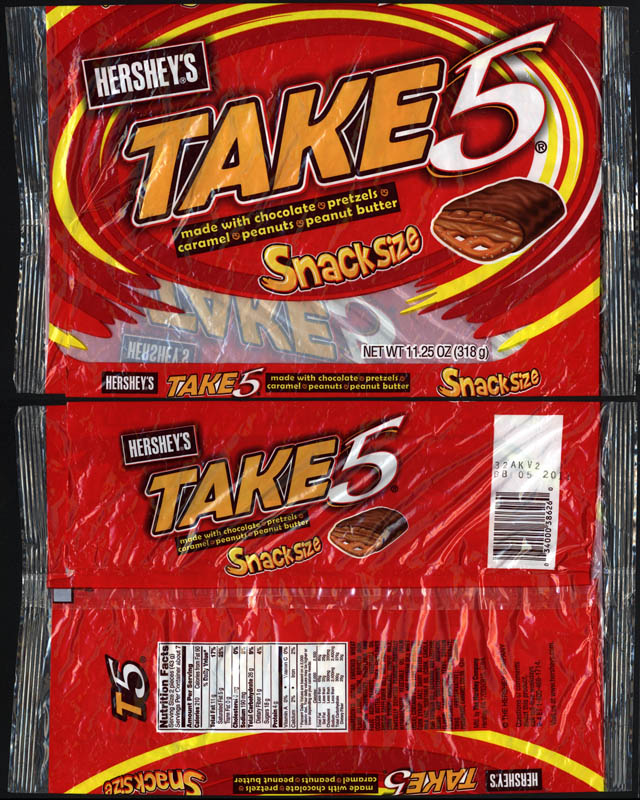 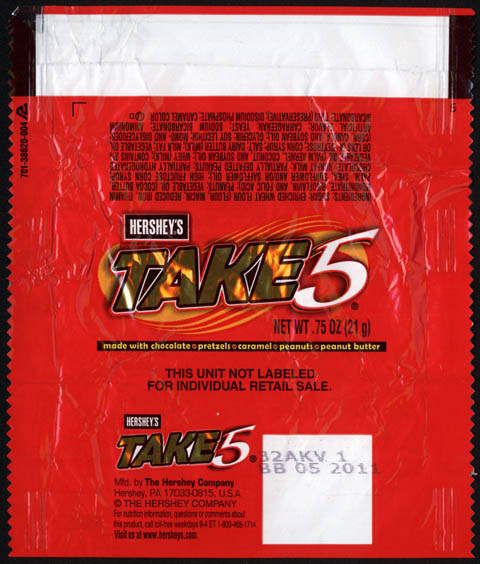 To wrap up, I’d like to point out that the Take 5 received its first major wrapper redesign, just last fall.  I first noticed the incoming design in August or September of 2011.  One of the fun aspects of collecting packaging like candy is to note the evolution of design and graphics over the years.  It’s why one of my favorite things to do for posts is to create a timeline that covers several versions of wrappers over the years.   This is the first change for Take 5 – I wonder how many more it might see in its lifetime? 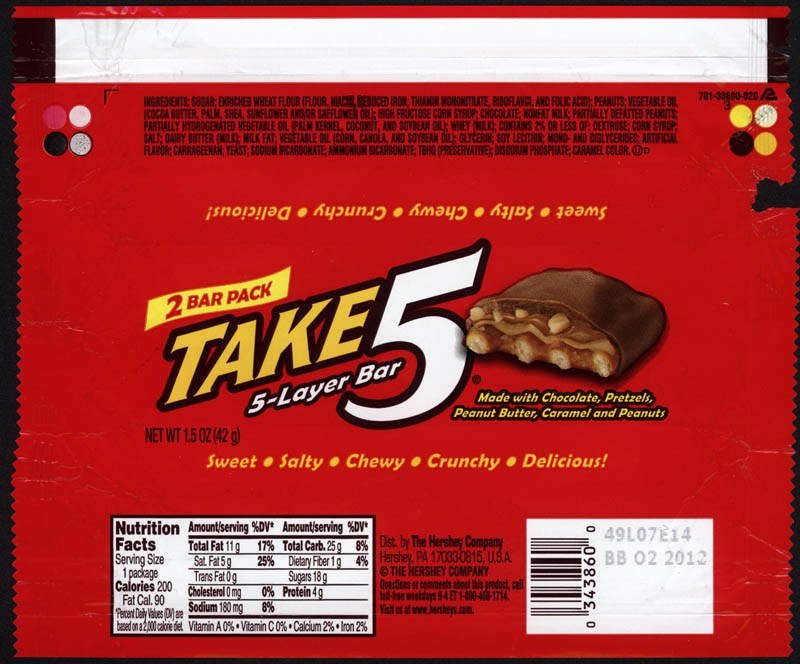 That’s all for Tuesday’s talk on Take 5.  Join us tomorrow for the weekly edition of Wacky Wednesdays.

A New York City based writer, editor and sometimes actor. After spending much of the 1990′s in the comic book business helping tell the stories of Marvel Comics’ X-Men as series editor, he has since split his time between developing his own entertainment properties while still consulting and working on others. Having been described as “the Indiana Jones of lost and forgotten candy”, Jason is one of the country’s premier candy collectors and historians with his discoveries appearing in countless blogs, magazines, newspaper articles, and books. Always happy to share his knowledge and unique perspectives on this colorful part of our popular culture, Jason has consulted with New York’s Museum of Food and Drink and has also been a featured guest on Food Network’s Heavyweights, France’s M6 Capital, and New York’s TheActionRoom.com. My Google Profile+
View all posts by Jason Liebig →
This entry was posted in Chocolate, Hershey, Peanut Butter and tagged 2000's, bar, candy, chocolate, collecitng, collectible, collection, confection, contemporary, current, Hershey, limited edition, packaging, sweets, vintage, wrapper. Bookmark the permalink.

6 Responses to A topic for a Tuesday – Take 5 from Hershey.