Happy 100th Birthday to Oreo! – Part Two: All Those Flavors

Yesterday, I covered the evolution of Oreo cookie packaging from the 1950’s through the early 2,000’s.   Today, I’ll be taking a look at the range of flavors and limited editions that Oreo has released over the past few years.

Before I get to the domestic brand extensions, I wanted to share two international versions I’ve found.  The first is a Double Stuff (note the two F’s) from the UK.  I believe Oreos are newly making their way into the UK. 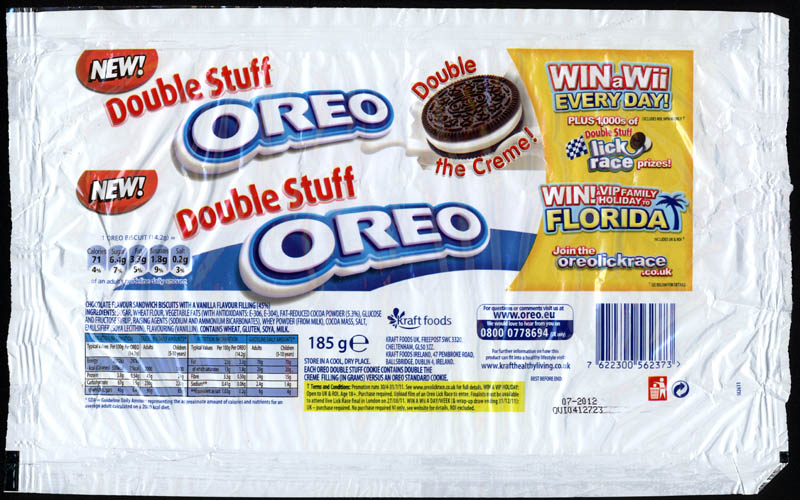 And here is a limited edition Oreo product from Japan that is a bit like a Moon Pie: 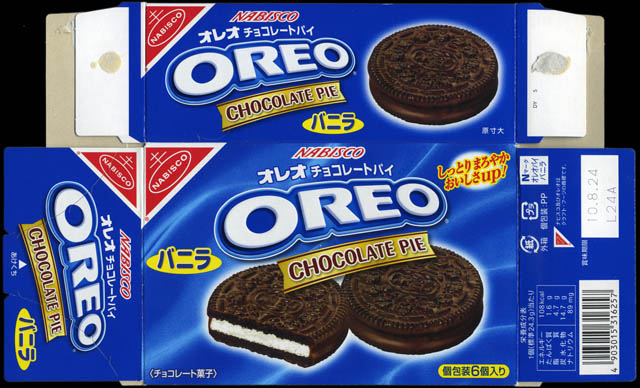 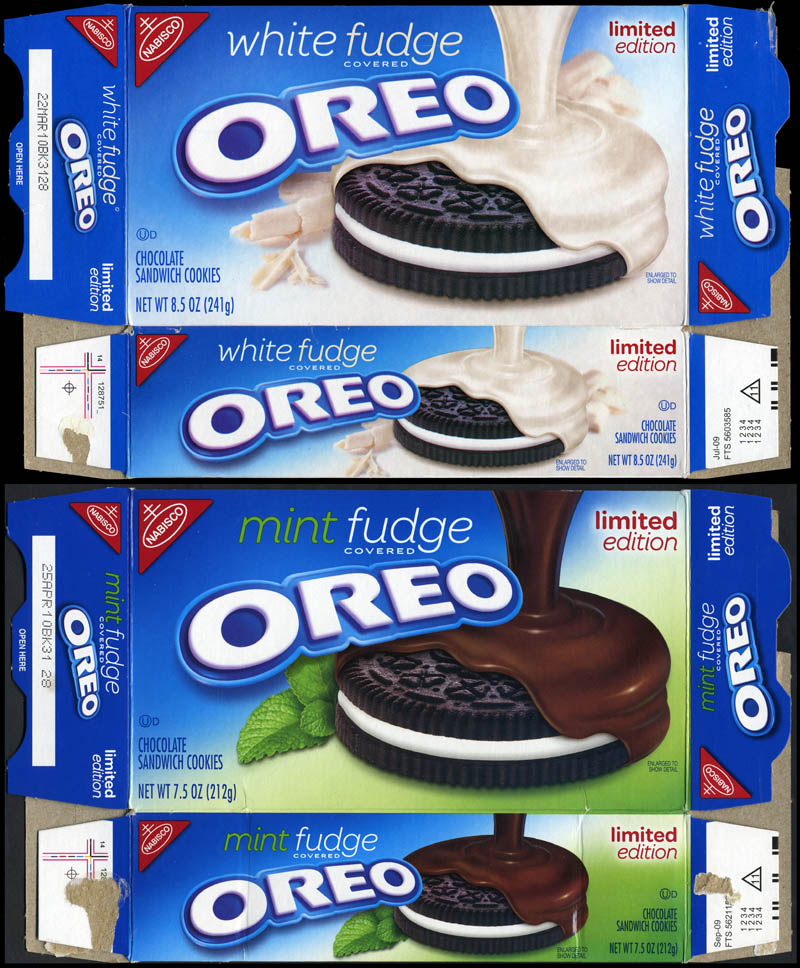 These fudge-covered Oreo special releases are similar to the all-year-round Fudge Cremes – these may be discontinued as I am seeing theme less-and-less: 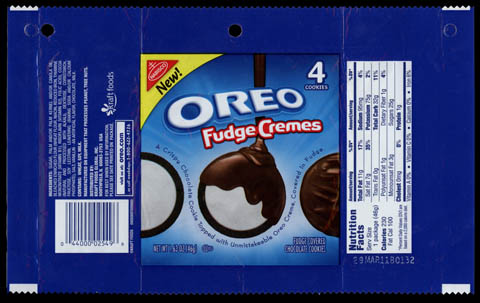 Another variation that I’ve encountered was an Oreo redesign that Target released exclusively in 2009.  It’s a bit of a throwback to the 1960’s design I showed yesterday: 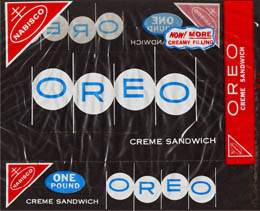 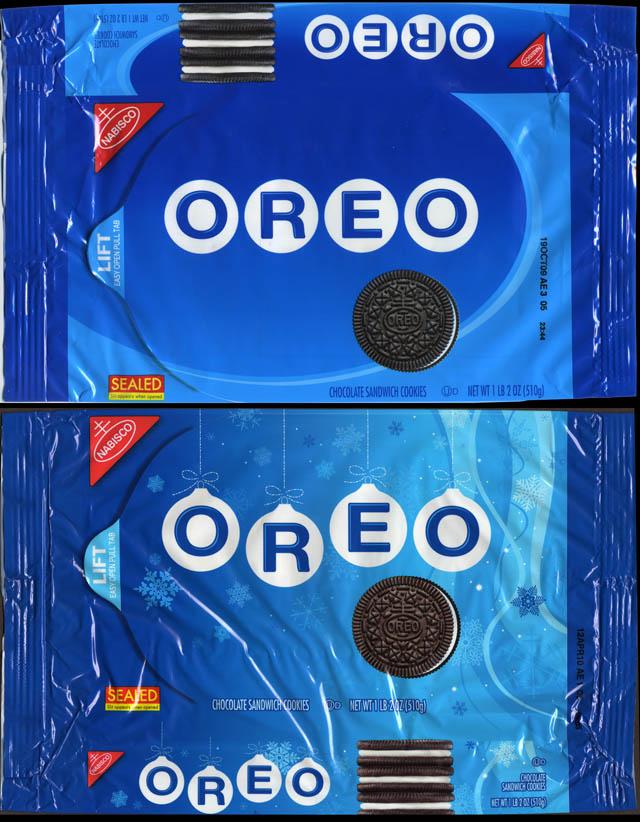 Target tested that Oreo redesign, and did the same with their Ritz packaging that year.  Note that the Target redesign also received a holiday edition.  It looked so similar to the standard, I almost missed it when it was on shelves.

The major seasonal releases that Oreo has been doing are simply Double Stuf cookies with colored filling and newly designed cookie pieces and packaging: 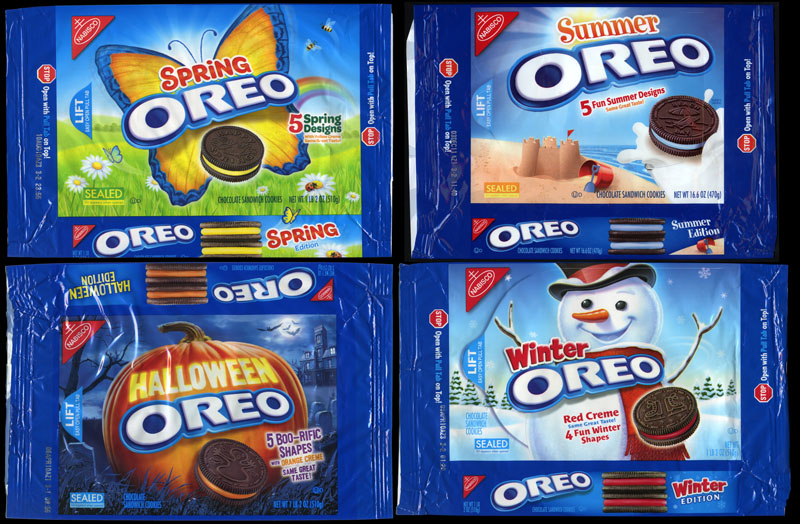 A portion of the special releases each year are simply re-branded standard Oreos.  Here are a few others that have come out, that are not strictly new flavors. 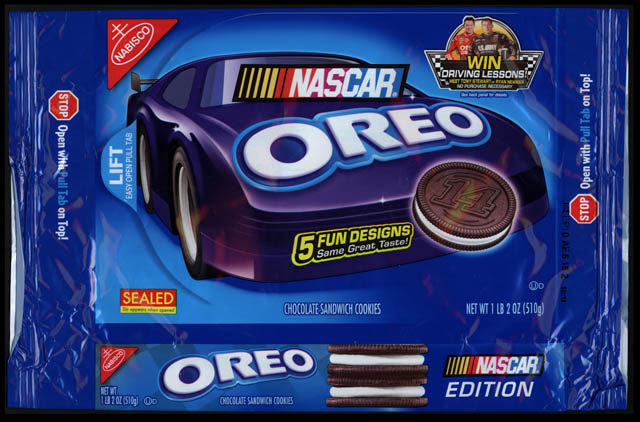 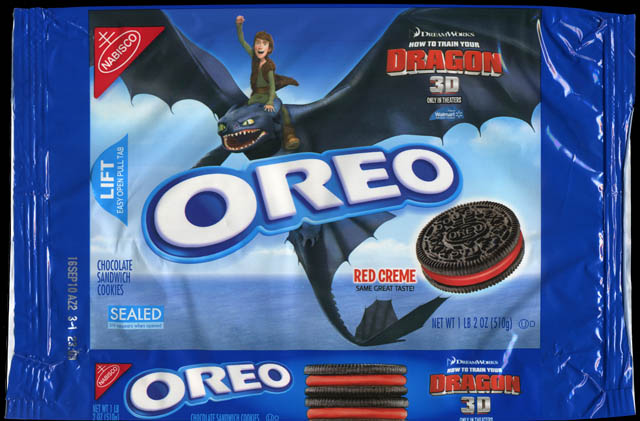 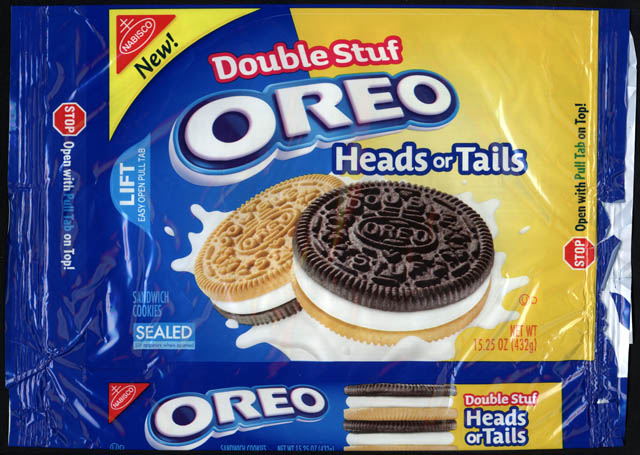 Here’s one that changes up the the shape, but not the filling: 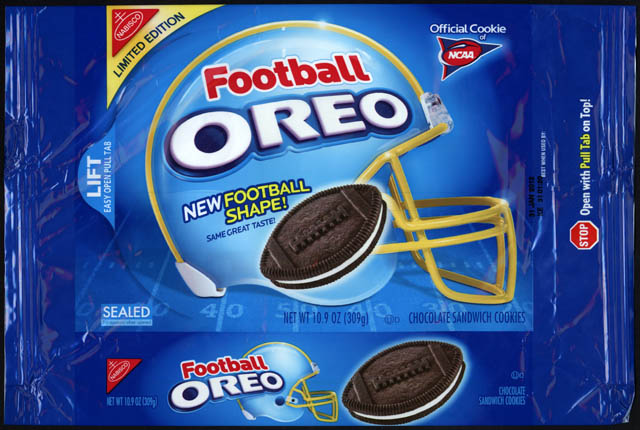 Now onto the especially fun ones – the limited edition flavors: 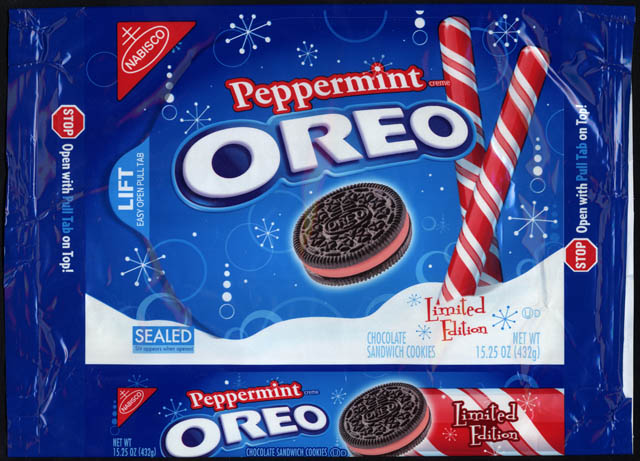 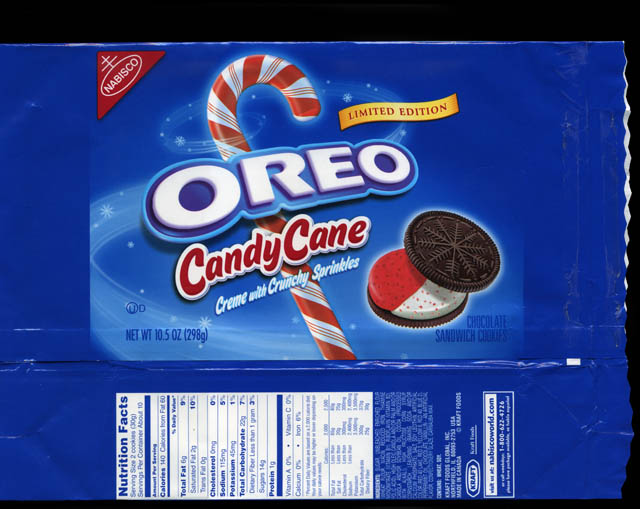 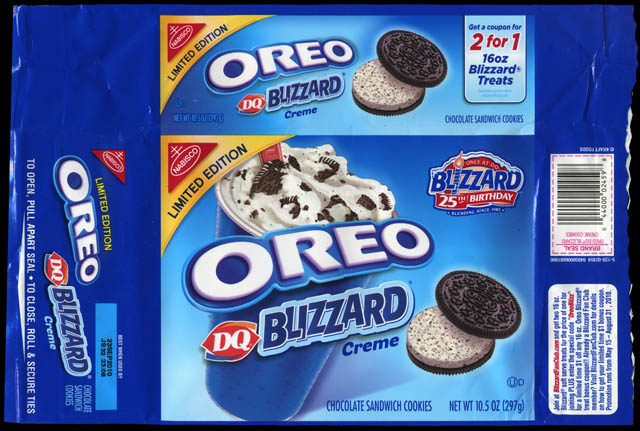 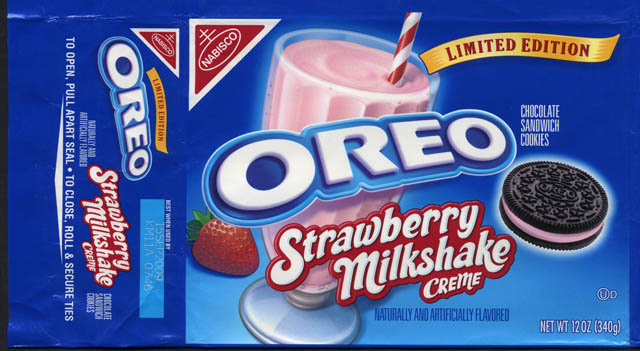 This next one is my favorite of the limited edition flavors from recent years: 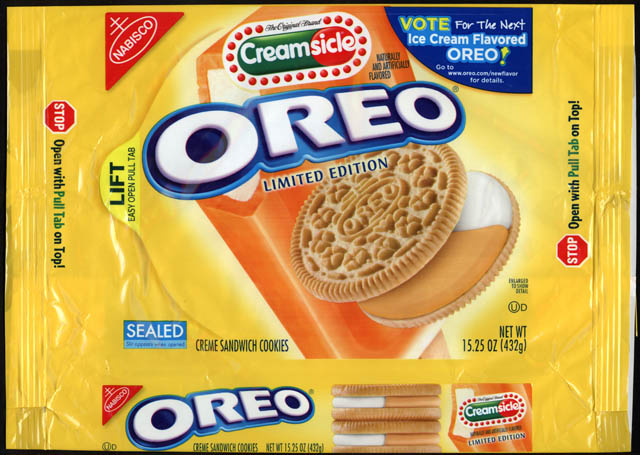 In 2011, Nabisco followed the bigger-is-better motif when they introduced their Triple Double Oreo: 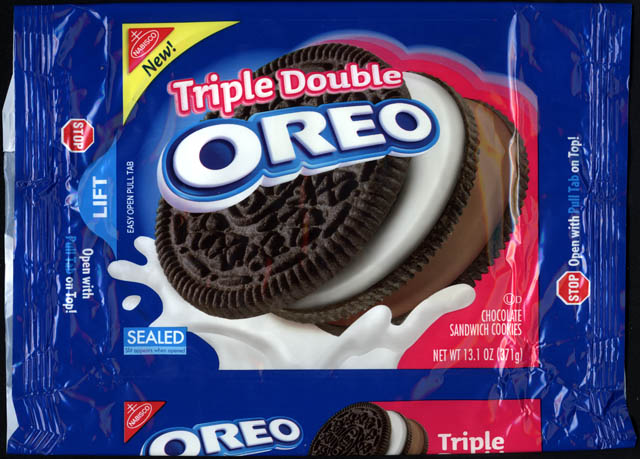 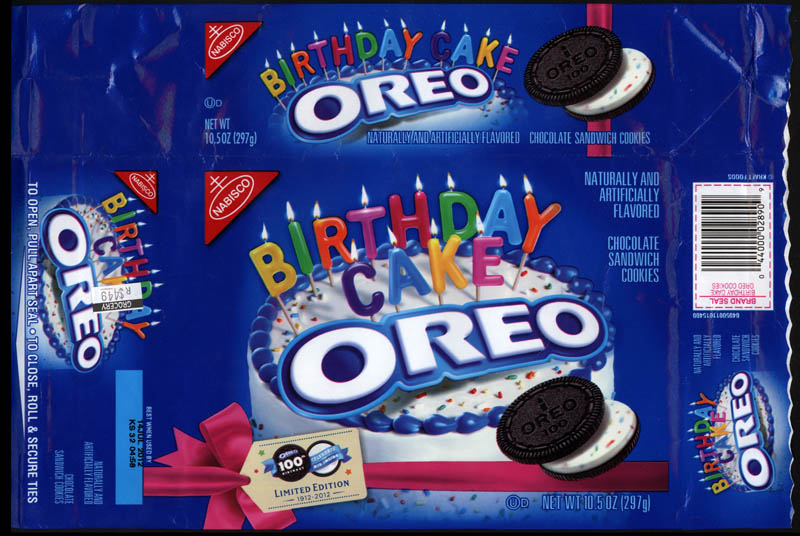 I’d like to close with a piece that I found in my files after yesterday’s article went live.  It is a six-pack package from 1993 – which shows us what the packaging looked like after the move from the 70’s-80’s design, but before our modern look had taken hold: 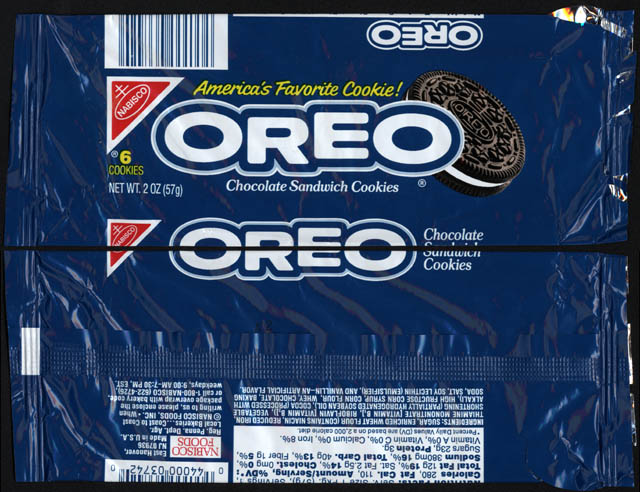 That’s all for CollectingCandy.com’s two-day Oreo celebration.  Check back tomorrow for another fun candy piece.

A New York City based writer, editor and sometimes actor. After spending much of the 1990′s in the comic book business helping tell the stories of Marvel Comics’ X-Men as series editor, he has since split his time between developing his own entertainment properties while still consulting and working on others. Having been described as “the Indiana Jones of lost and forgotten candy”, Jason is one of the country’s premier candy collectors and historians with his discoveries appearing in countless blogs, magazines, newspaper articles, and books. Always happy to share his knowledge and unique perspectives on this colorful part of our popular culture, Jason has consulted with New York’s Museum of Food and Drink and has also been a featured guest on Food Network’s Heavyweights, France’s M6 Capital, and New York’s TheActionRoom.com. My Google Profile+
View all posts by Jason Liebig →
This entry was posted in cookies and tagged collectible, collecting, collection, cookie, Nabisco, Oreo, packaging, vintage. Bookmark the permalink.

6 Responses to Happy 100th Birthday to Oreo! – Part Two: All Those Flavors