As a confectionery brand historian and collector, one the most common inquiries I get are those that ask my assistance in identifying some product or brand from the hazy memories of that persons childhood.  I’m happy to get these requests as it’s always a fun challenge  and I’m proud to say that in the majority of cases I am able to provide the answers being sought.  One product that I’ve received a number of inquiries about over the years is one that I’m going to showcase today, that being Fruit Face.  Make the jump to check it out!

Fruit Face was produced in the 1980’s (possibly as early as the 70’s and as late as the 90’s) by World Candies, a company most well known as the main producer of candy cigarettes (now called candy sticks) over the decades.  Fruit Face was offered in a box and were pressed dextrose square-shaped tablets with small faces on each piece.  For whatever reason, the unique design, look and name combined in a way to make these really stick in people’s brains, prompting the many inquiries I’ve gotten about them through the years.

One of the other reasons I’ve gotten so many inquiries is likely because, before now, there were no official references to Fruit Face anywhere online, and there were certainly no photos or images of them.  So today, I get to put some history down and offer up not one, but TWO exclusive Fruit Face images!   It’s two images, as I own an example of the original Fruit Face box as well as the brand extension box for Tropical Fruit Face!

[Unfortunately, I’ve never come across a box with the unusual Fruit Face candy still intact inside it, as I would love to also show you what the candy looked like, but that quest continues.]

Now that my prelude is out of the way, here are the goods.  Please enjoy this exclusive (and first) look at these as you couldn’t see them anywhere else online before now! 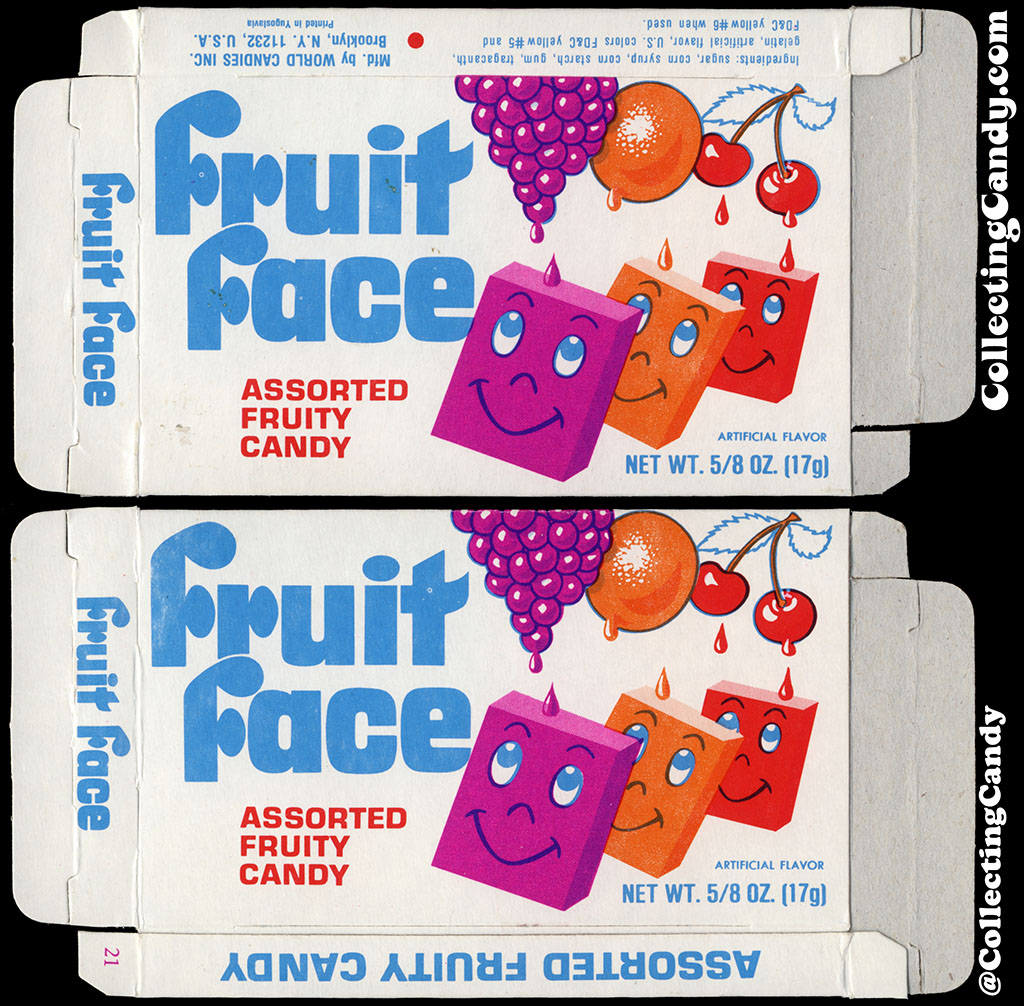 Hooray! From now on, when someone tries to remember what these were called or what they looked like, their Google search won’t come up empty anymore.

And that’s that – the only Fruit Face related pieces I’ve got in my archives, but ones I’m so excited to finally bring together and share.  Hope you dig ’em and if the hunt to put an image to your own faded memory brought you here, make sure to comment and share your memories of these odd-yet-memorable treats!

A New York City based writer, editor and sometimes actor. After spending much of the 1990′s in the comic book business helping tell the stories of Marvel Comics’ X-Men as series editor, he has since split his time between developing his own entertainment properties while still consulting and working on others. Having been described as “the Indiana Jones of lost and forgotten candy”, Jason is one of the country’s premier candy collectors and historians with his discoveries appearing in countless blogs, magazines, newspaper articles, and books. Always happy to share his knowledge and unique perspectives on this colorful part of our popular culture, Jason has consulted with New York’s Museum of Food and Drink and has also been a featured guest on Food Network’s Heavyweights, France’s M6 Capital, and New York’s TheActionRoom.com. My Google Profile+
View all posts by Jason Liebig →
This entry was posted in 1970's, 1980's, 1990's, Boxed, Hard Candy and tagged 1980's, 80's, candy collecting, candy collection, candy collector, candy wrapper collection, candy wrapper collector, collectible, collecting candy, confectionery, confections, face, fruit, fruit face, packaging, packaging design, sweets, vintage candy wrappers, World Candies, wrapper. Bookmark the permalink.