It’s once again Super Bowl Sunday, and once again I’ll be marking the day with some NFL tie-in candy wrappers!  This year I’ll be featuring Mars’ play on their successful “You’re Not Yourself When You’re Hungry” Snickers trait bar promotion, only with football-related traits.  So make the jump to check them out!

I hinted during November’s Snickers Week series of posts that I had one more set of wrappers to share but that I’d be holding them back until today.  And just as in those examples, the Snickers wrappers presented today replace the main Snickers logo with a phrase from football that could describe how someone might feel “if they were hungry”.  I think it’s a great concept for a promotion that not only ties into the NFL but also merges it with a pretty cool ongoing marketing campaign from Snickers.

I didn’t know these were coming so when I walked into a roadside gas station in upstate New York in September, I was shocked to discover this display dump:

I immediately stopped and began digging through the boxes present to figure out how many different phrases there were, and bought each one I could find.  In all, I discovered ten different wrappers (including the standard “Snickers” version).  Here they are: 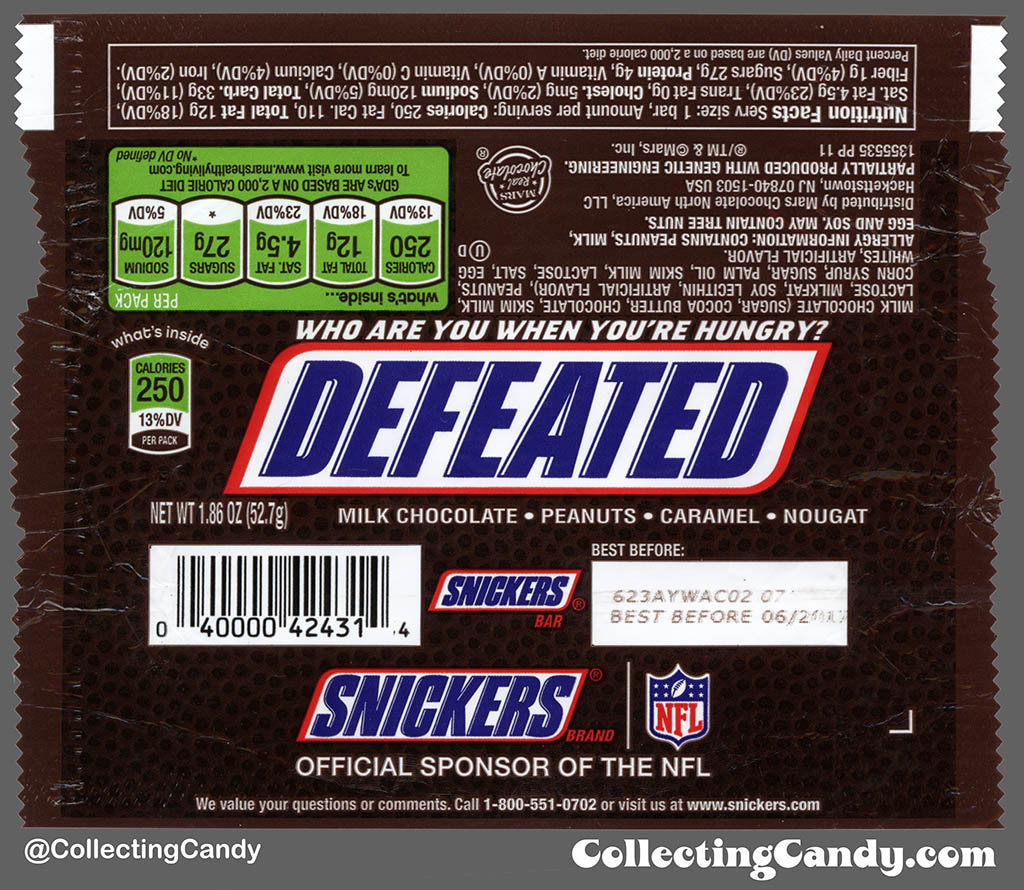 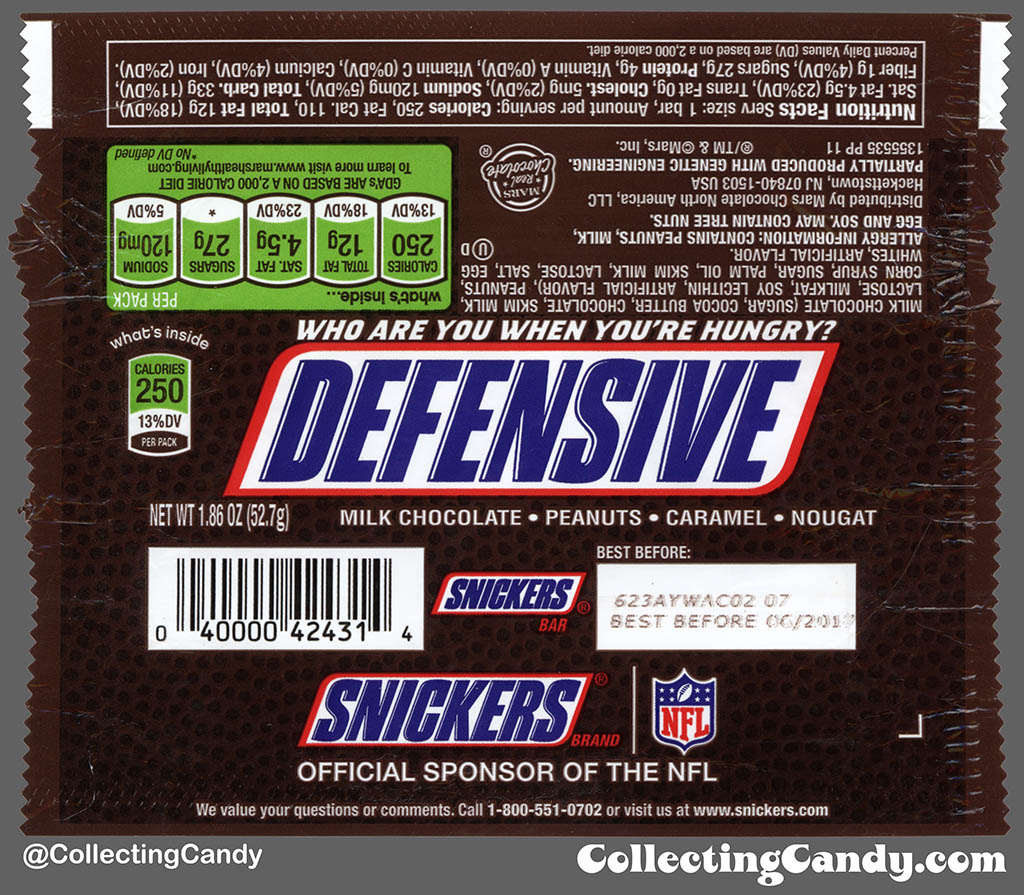 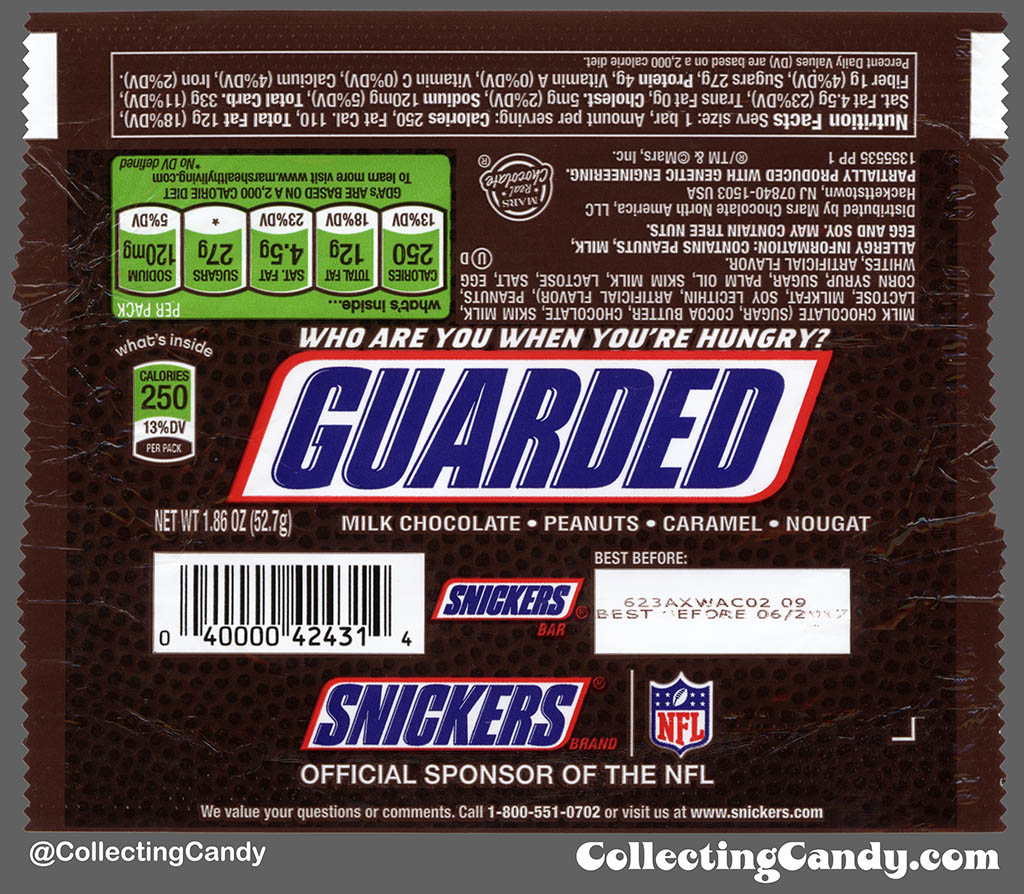 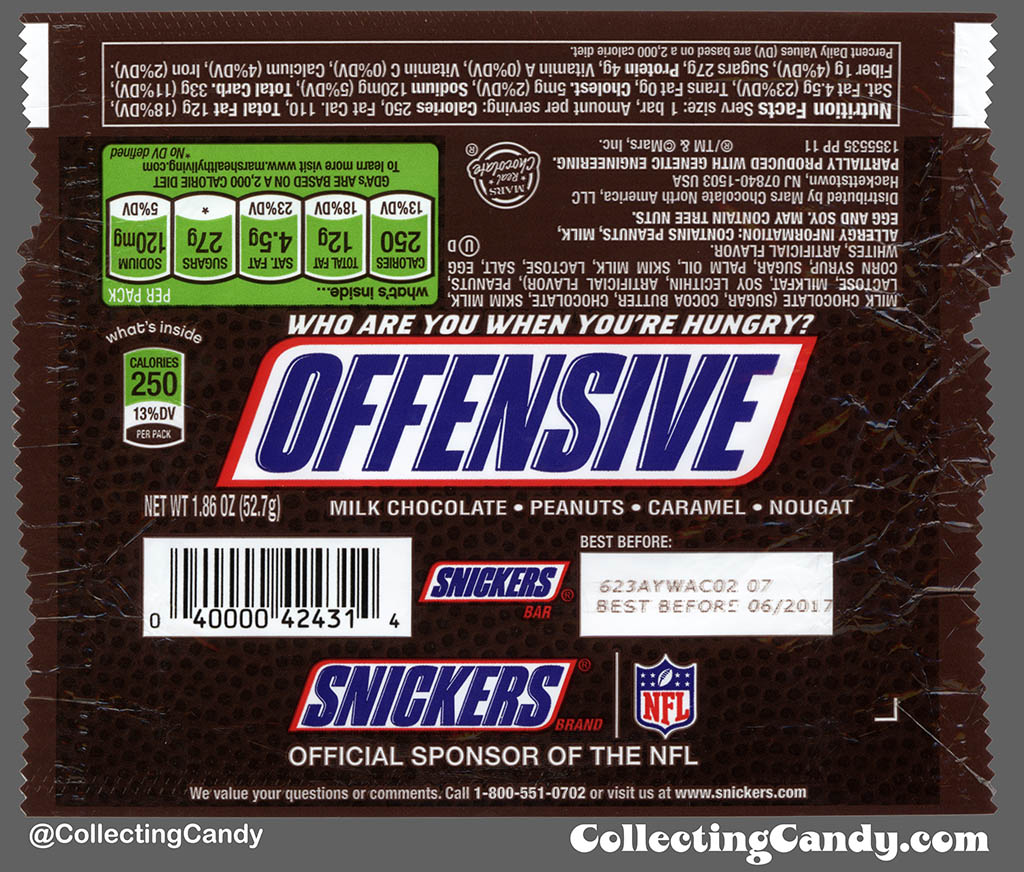 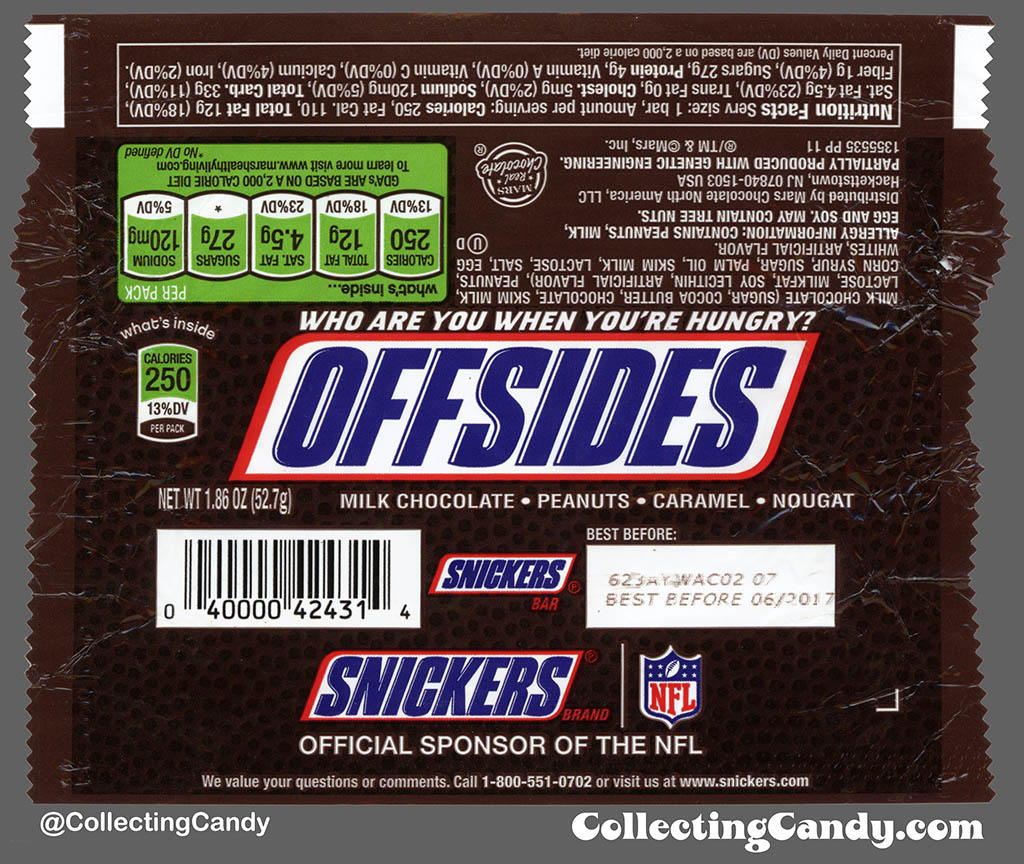 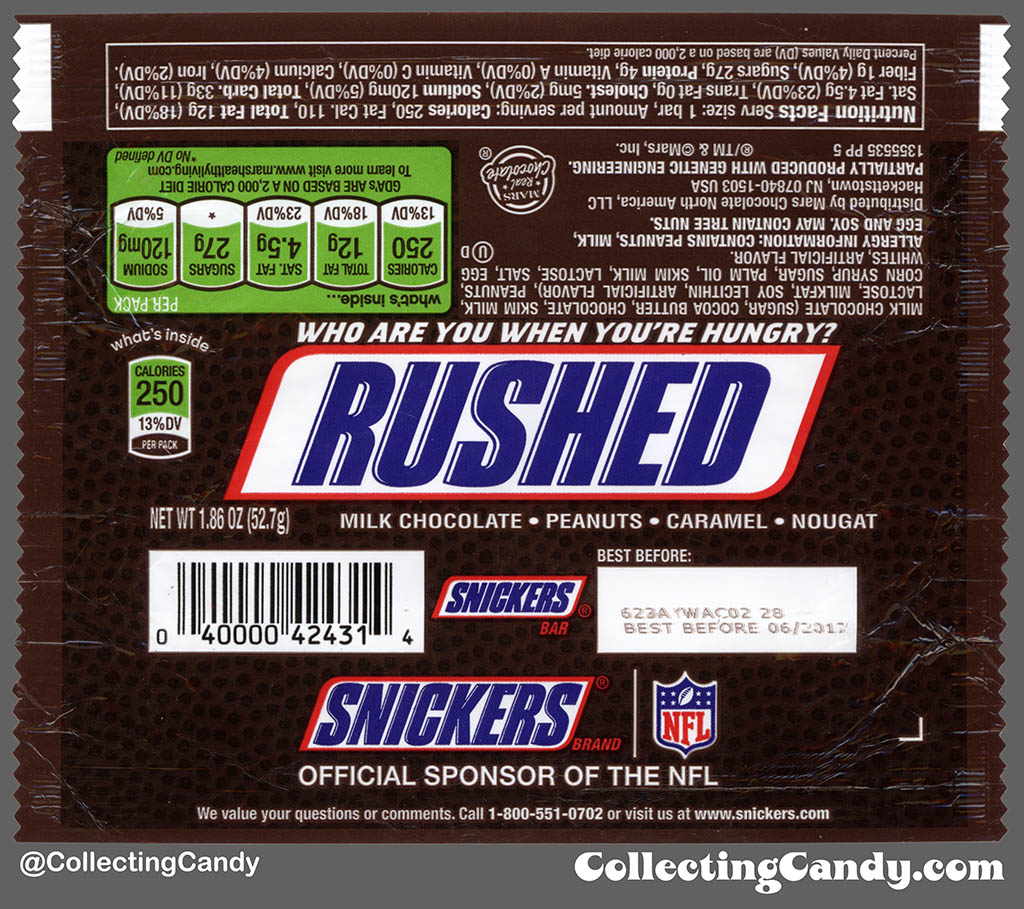 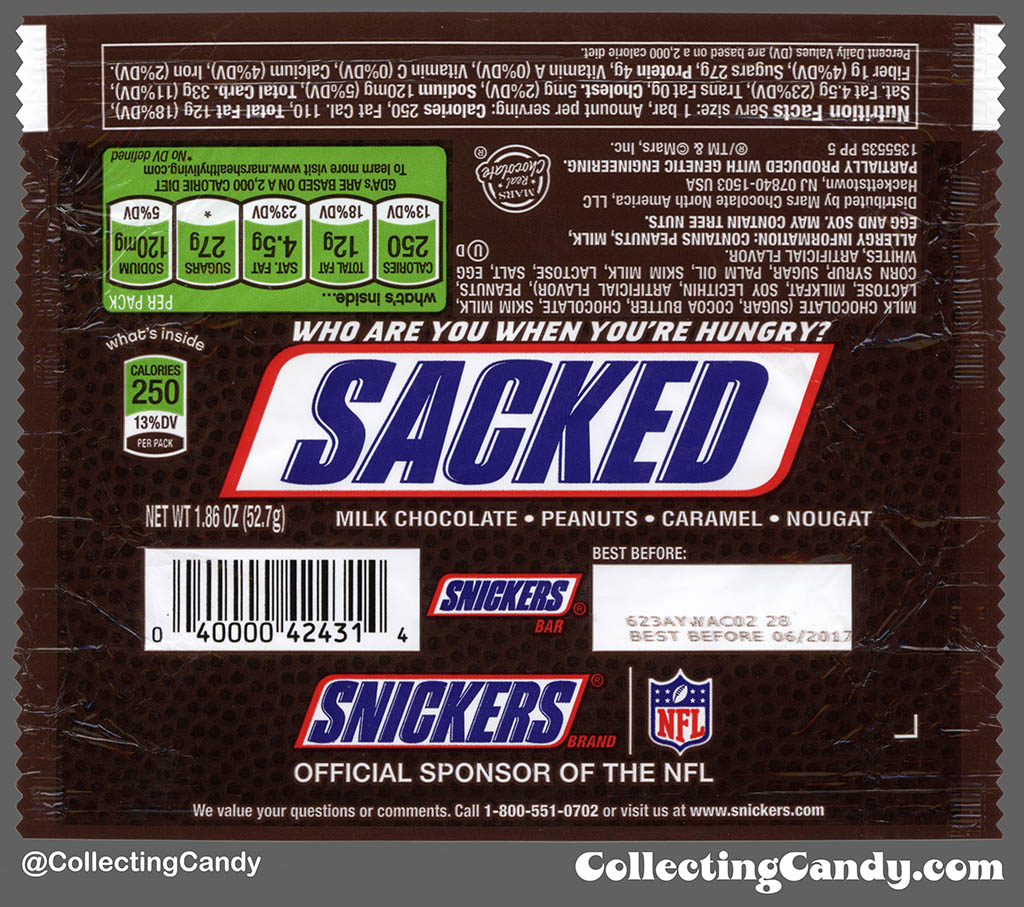 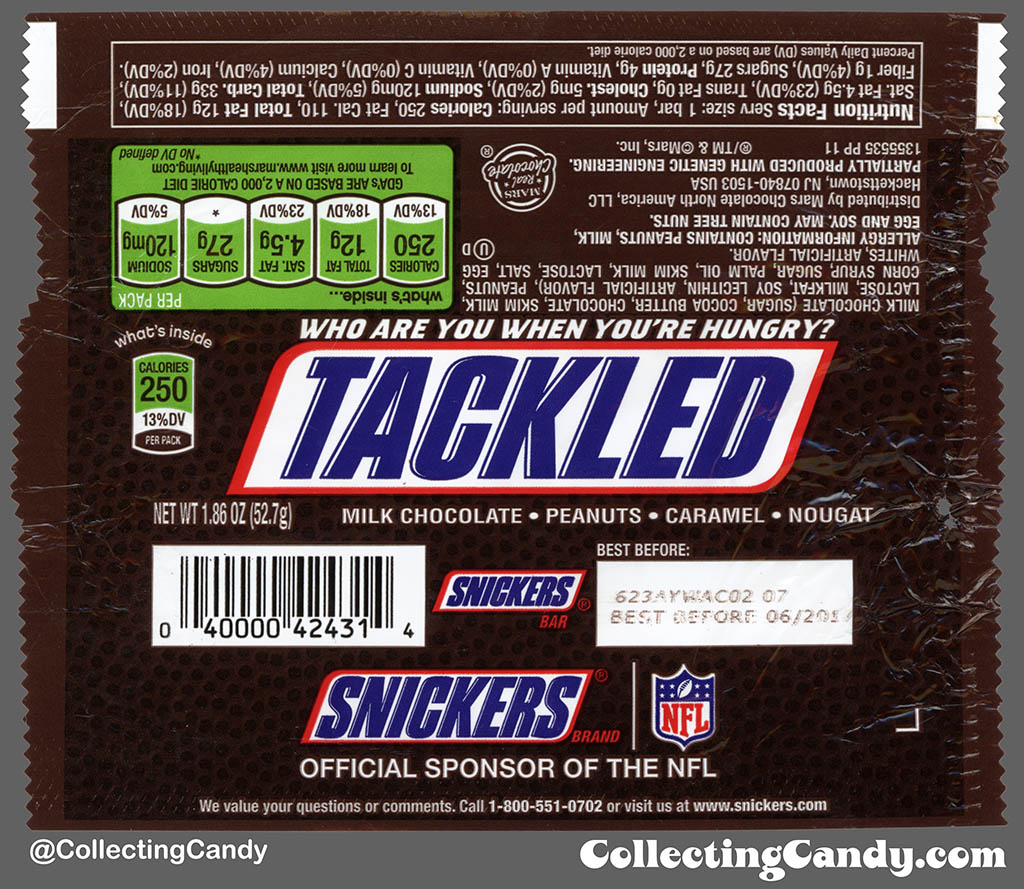 In the four months since I found those NFL Snickers bars at that roadside stop, I’ve only encountered them one more time.  Unfortunately, I wasn’t able to find any other traits in the single bar size.  I did however find examples of the NFL bars in the 2-bar size packs and within the few I picked up, I did find one additional trait represented, “Benched”: 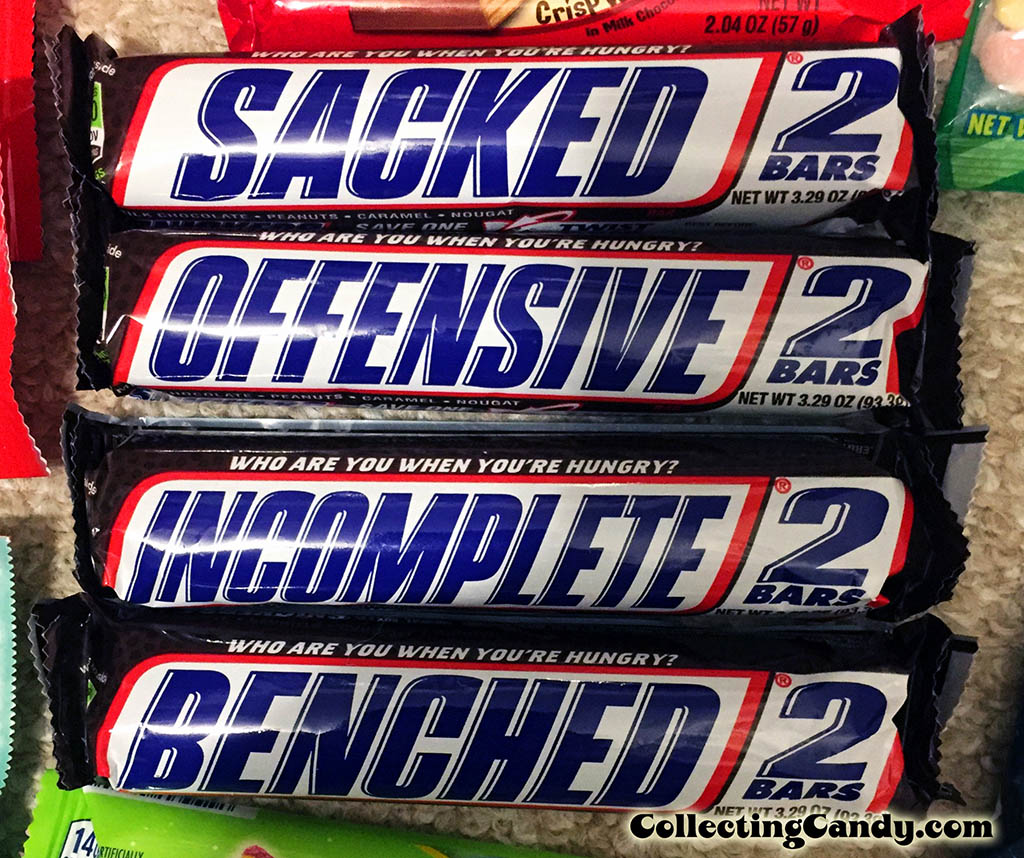 Add to that, I spotted a promotion online from Snickers and CVS that featured one additional trait I haven’t come across, “Fumbly”: 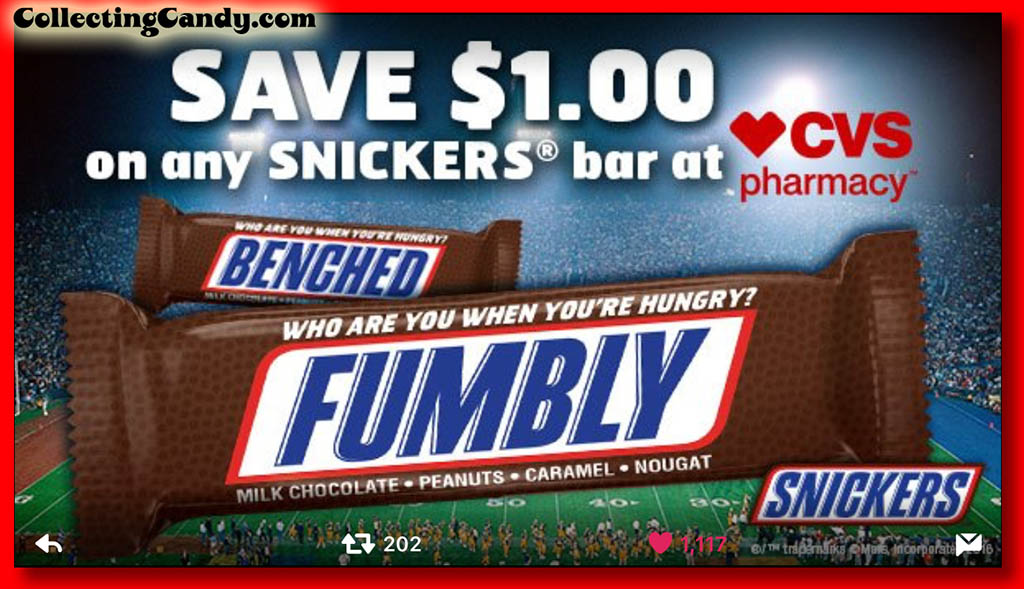 So I’m missing at least two different traits in the single-size bars, and my suspicion is that there are even more I still need to find (there were 20 different traits offered in the original Snickers trait bar promotion which means I might only be half-way to a complete set here).   So I’ve got my work cut out for me trying to find the rest and with luck I hope I still can.   I want to make sure I put together a complete set of these as I’ve really enjoyed this campaign.

That’s all I have on the Snickers NFL trait wrappers but I have one other piece I wanted to share today that’s football-related.   For last year’s Super Bowl I featured Reese’s Footballs and in the fall I found a striking new graphical package for those that I’d never seen before.  Check it out: 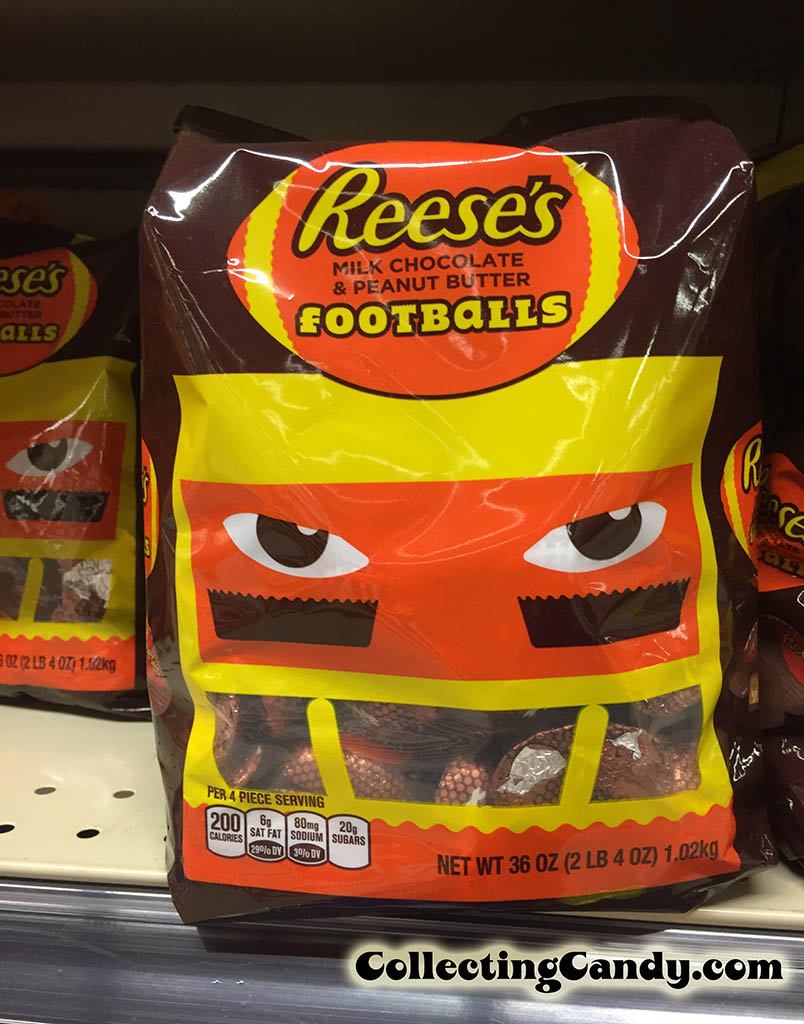 Love the design element of the under-eye face paint in the shape of the Reese’s Peanut Butter Cup – it’s such a cool choice.  Here’s a scan of the package after I emptied and scanned it.  It didn’t lend itself to scanning that well, but it’s still worth sharing: 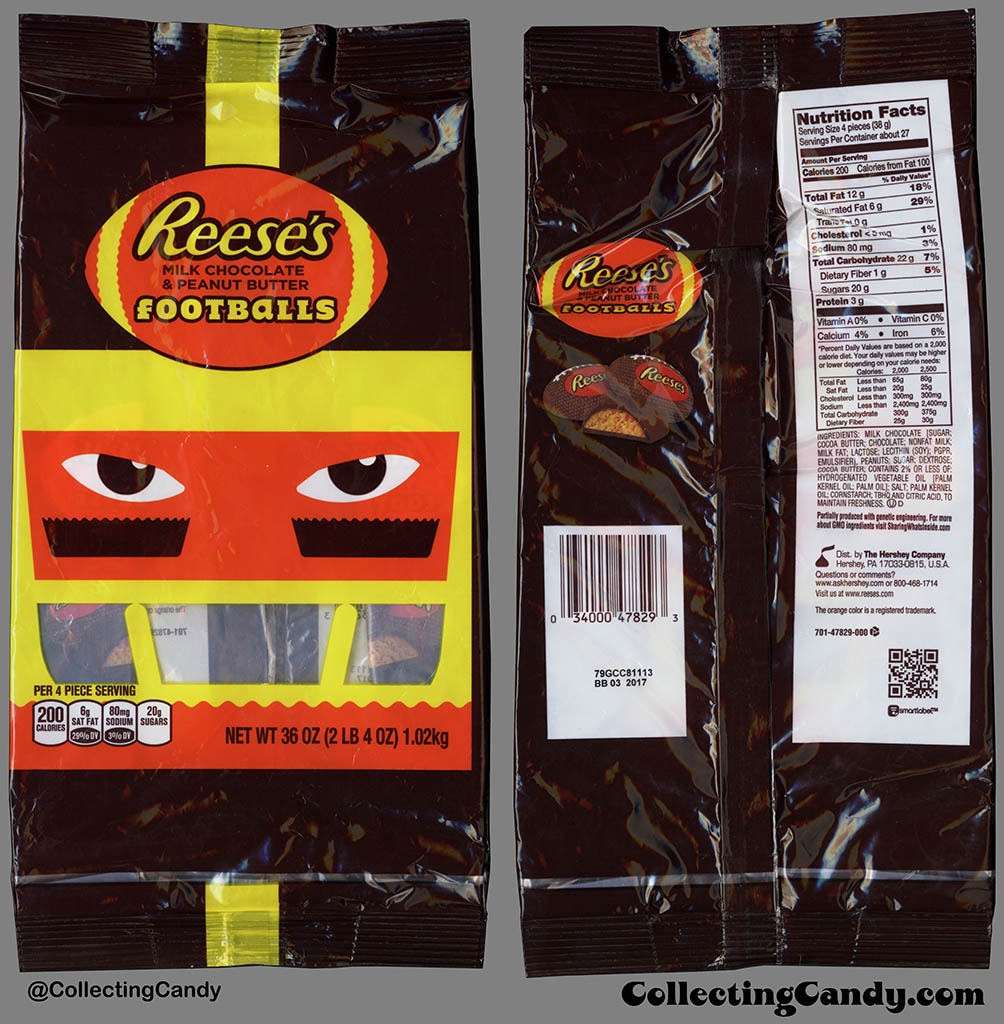 And that’s everything I’ve got for today’s post.  I hope everyone enjoys today’s “big game” between the New England Patriots and the Atlanta Falcons.  See you next time!!

A New York City based writer, editor and sometimes actor. After spending much of the 1990′s in the comic book business helping tell the stories of Marvel Comics’ X-Men as series editor, he has since split his time between developing his own entertainment properties while still consulting and working on others. Having been described as “the Indiana Jones of lost and forgotten candy”, Jason is one of the country’s premier candy collectors and historians with his discoveries appearing in countless blogs, magazines, newspaper articles, and books. Always happy to share his knowledge and unique perspectives on this colorful part of our popular culture, Jason has consulted with New York’s Museum of Food and Drink and has also been a featured guest on Food Network’s Heavyweights, France’s M6 Capital, and New York’s TheActionRoom.com. My Google Profile+
View all posts by Jason Liebig →
This entry was posted in Chocolate, Mars, Peanut Butter, Reese's and tagged candy collecting, candy collection, candy collector, candy wrapper collection, candy wrapper collector, collectible, collecting candy, confectionery, confections, football, Mars, packaging, packaging design, Patriots, Reese's, Snickers, Superbowl, sweets, vintage candy wrappers, wrapper. Bookmark the permalink.